Crowned champions Liverpool were taking on Chelsea in their last home game of this Premier League season. The game turned out to be an eight-goal thriller with a lot of chances from both teams. Liverpool and Chelsea played to its strengths, however, Jürgen Klopp’s side were more clinical in front of goal and won the game at the end. Both teams managed to create a lot of problems for each other, with the different tactical approaches and formations.

In this tactical analysis, we will delve into tactics of both coaches for this game, and how teams tried to exploit the weaknesses of each other.

Frank Lampard, on the other hand, also opted for the same lineup he used in the FA Cup game against Manchester United, with the only change being for Kepa Arrizabalaga instead of Caballero in goal.

Despite that both teams kept almost the same lineups from their last games, Liverpool had an upper hand in fitness levels. The Reds had a week of preparation for this game after a defeat to Arsenal, while Chelsea played in cup competition three days prior to this game. 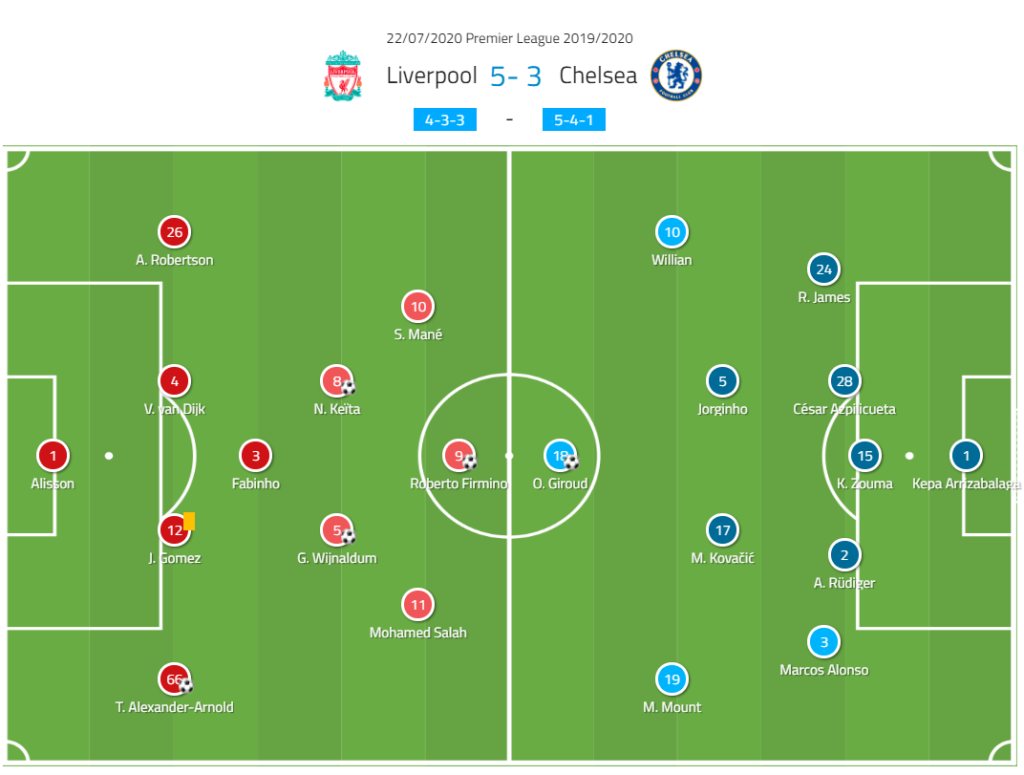 In this game, we witnessed a very interesting battle of formations, with a lot of tactical nuances at play. When Chelsea defenders were playing out of the back, Liverpool’s attacking trident managed to limit easier passing options for the most part. They did it by smart positioning and timely runs. In the image below you can see one of the examples, where Zouma has the ball and both Salah and Mané are making inverted runs to press the Frenchman. Both wingers tried to position themselves in a way that would allow them to become cover shadows of wide centre-backs. So, most of their runs were diagonal. Firmino wasn’t pressing the third centre-back most of the time, marking one of the Chelsea central midfielders instead. When the Brazilian was tracking either Jorginho or Kovacic in midfield, another Liverpool midfielder would push up and mark the remaining midfielder. This structure forced the centre-backs to play wide towards either James or Alonso. When the ball was at the feet of one of the wider centre-backs, pressing them was easier with one of the wingers creating a cover shadow for the centre-back in the middle.

Overall, the attacking trio of Liverpool managed to cope with the initial build-up phase, smartly switching depending on where the ball was. However, Chelsea formation and personnel caused some alterations for Jürgen Klopp’s usual tactics down the road. As I’ve mentioned in the previous paragraph, while Firmino was marking a Chelsea midfielder, either Wijnaldum, Keïta or Fabinho would mark the remaining midfielder. Below you can see one of the examples, where Keïta marks Jorginho. Due to Mané having more defensive workload than Salah, with the latter often staying with Rüdiger, Keïta would press Azpilicueta when the Senegalese wasn’t able to.

On other occasions, because of the predetermined superiority of Liverpool in midfield, both Jorginho and Kovacic were marked by Liverpool midfielders, and the attacking trio of the hosts were pressing Chelsea’s backline.

When the ball was played wide to the full-backs, Wijnaldum or Keïta were switching from marking midfielders to marking Alonso or James. This can be seen in the shot below, with Wijnaldum dropping wider to cover the run of Alonso.

This double work that fell on the shoulders of both Liverpool central midfielders was the main defensive problem for the hosts in this game, and we will touch upon this in more detail in the later sections of this analysis.

In the next section, we will look into the midfield battle of this match, and how both teams tried to balance the scales in the middle within their respective formations.

Liverpool tried to exploit their man-advantage in midfield throughout the game, which saw the hosts using more risky positioning of midfielders.

Both Wijnaldum and Keïta were positioning themselves behind Chelsea midfield line during the build-up. Due to Salah being more out wide, while Mané was dropping deep more often, it can be said that it was more of a case with Wijnaldum. You can see an in-game situation in the image below, where Jorginho jumps at Fabinho and Keïta is behind the Italian.

In order to confront this in some way, Chelsea wingers were positioning more narrow when defending. They tried to create a cover shadow for Wijnaldum and Keïta and were jumping at Alexander-Arnold or Robertson when they receive. Here, Mount initially covers Wijnaldum, but when TAA receives, he switches on to him, while Kovacic marks the Dutchman. It’s a very similar concept of having to mark two players which we saw in the previous section with Liverpool midfielders marking Chelsea midfielders or full-backs depending on the situation.

In the second half, with Chelsea trailing and playing more aggressively, Alonso would offer help in the midfield by tucking in and playing more narrow. Here he makes a run to mark Wijnaldum, who could be free to receive because both Kovacic and Jorginho are preoccupied and there is no help from the wingers.

Chelsea used their positioning of wingers to their favour too, because they were able to receive in the half-space sometimes. In the shot below, Hudson-Odoi is free to receive after Milner is late to mark him.

At the same time as having the attacking advantages of having more players in the middle, Liverpool also faced a dilemma on the flanks, where Chelsea were dominating.

Penetrative runs in behind

In the section regarding Liverpool press, I mentioned that Liverpool midfielders had to switch on to full-backs when they receive. Because of this, both Alonso and James had extra time on the ball, with TAA and Robertson usually marking Mount and Willian.

Here, Alonso receives the ball and Wijnaldum is late. Alexander-Arnold can’t jump at Alonso because he can’t leave Mount. At the same time, Trent moves slightly towards Alonso and that starts a chain reaction: Gomes moves towards Mount and so on. Hence, there are bigger pockets of space to run into for Chelsea front-three. This was the case throughout the game, and this also impacted Liverpool’s attacking structure, which we will see in the following section.

Here you can see another example, this time with Robertson jumping at James and with Keïta being late to track Willian’s run. Hence, the Brazilian has a good crossing opportunity towards Giroud.

The narrowness of Liverpool defence favoured Chelsea to use switches on a consistent basis, and it bore fruit. Zouma starting in the centre of the backline allowed more skilled centre-backs(Rüdiger and Azpilicueta) to switch the play to the opposite flanks.

Here is one more example of a run in behind from Hudson-Odoi. Robertson has eyes on the ball and he is in a static position, and James makes a penetrative run. Chelsea’s attacking were torturing Liverpool defence with this runs from start to finish, and all their three goals were scored after these runs.

The aggressive positioning of attacking players from Frank Lampard was meant to force TAA and Robertson to stay back more than usual, and they were pinned back by Chelsea wingers more than they would like to. Even though both full-backs got their goal contributions in this game, the general attacking structure of Liverpool had to change. We saw a much smaller amount of crosses, with Alexander-Arnold and Robertson only making three crosses each.

Naby Keïta starting was a big boost for Liverpool in terms of ball progression from midfield, and his presence was perfect for this type of game, where the two main creators were shut down more than usual. In addition to his goal, Keïta was great at keeping the ball under pressure(same with Wijnaldum) and was also helpful in progressing the ball forward.

Liverpool tried to perform a wide rotation to put TAA and Robertson further forward, however, it wasn’t the case very often. Here you can see one of the examples: Keïta in the left-back spot, Mané inside and Robertson upfront. This worked on the other flank as well, and it didn’t really work, with the full-backs not getting any good crossing positions from this rotation.

Alexander-Arnold and Robertson were marked by Mount and Willian and they were kept at bay for a large portion of the game time, so the attacking roles of Mané and Salah changed too. The Egyptian was drifting inside with the ball was a pattern that we’ve seen in the first half especially. There, he was able to combine with Mané, Firmino or Wijnaldum. The midfielders were more attacking-minded in this game, and their efforts resulted in goals for two of them.

Mané was able to progress the ball himself too, picking it up in deeper areas and then going forward. He was receiving in the half-space more than usual, and his interactions with Robertson and Keïta were productive on the left side. He collected the most fouls(4) as well, and one of them became the reason for Alexander-Arnold’s goal from a free-kick.

Despite Liverpool scoring five goals, I don’t think that Liverpool’s midfield and attacking lines can be self-sufficient without the impact of its full-backs even for one game. The team was clinical in front of goal, but the lack of usual creativity from the flanks was visible in the first half. Mané and Salah were forced to take a lot of responsibilities of getting the ball into the box, not actually being in the box for deliveries. Their lack of presence in the penalty area is shown by their shots: zero shots for both of them in the first half and three shots from Salah in the second. Limiting the supply for the two wingers proven to be the effective method of neutralizing the duo in this game, and it was a great tactical approach by Frank Lampard.

Chelsea’s been one of the toughest opponents for Liverpool to play against this season, and this match was no exception. Lampard’s tactics worked well in this game, but it wasn’t enough to come out the winner. Liverpool team finally got their hands on the Premier League title after the game, and for Chelsea, nothing is over yet. The roller coaster of a battle for Champions League places continues, with the Blues desperately needing points in their next fixture against Wolves, as well as awaiting a favourable Manchester United win over Leicester at the same time. Nothing is decided yet, and the final game day takes place this Sunday, so a good weekend of English football is probably guaranteed.