Aston Villa find themselves above the dreaded dotted line on the Premier League table for the first time since February. It was a defensive masterclass, hard work and perseverance that saw Dean Smith’s side walk away worthy 1-0 winners against the Arsenal. 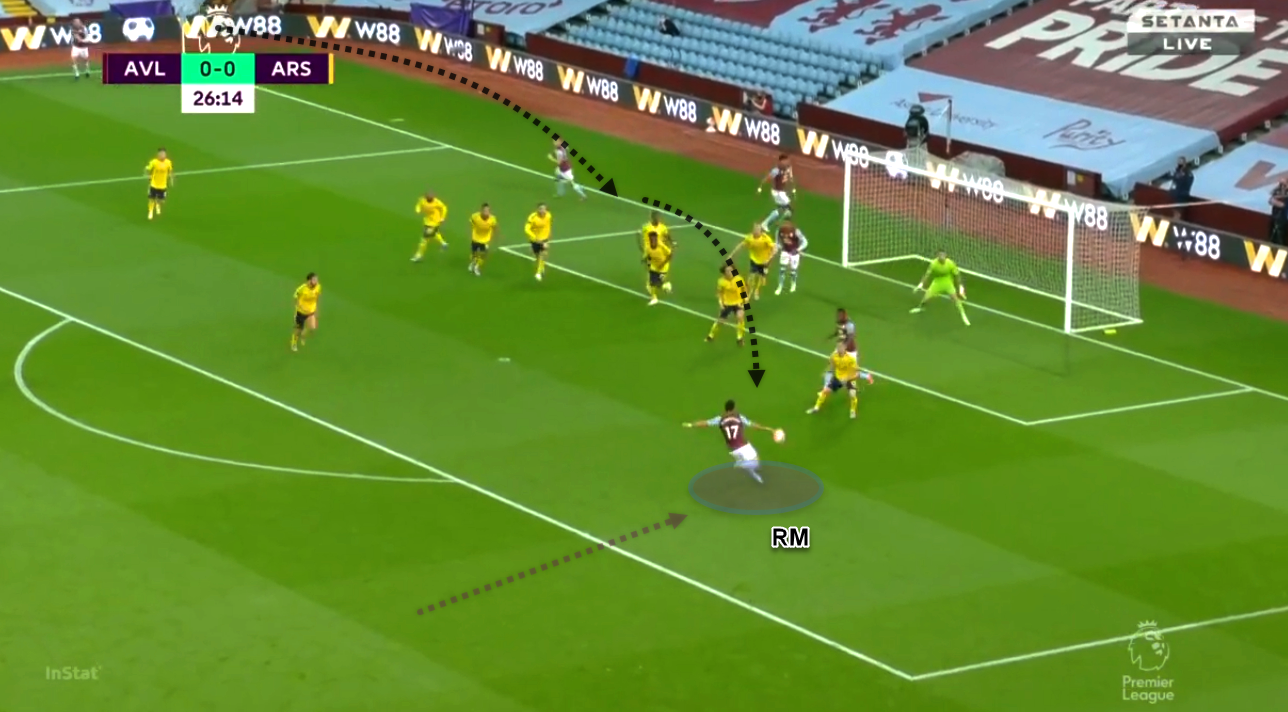 The games only goal, Aston Villa’s Trézéguet arrives in the box unmarked to collect a loose ball from an in-swinging corner only to finish down low from one touch. [1-0] 27 mins.

After a resounding week of victories for the Gunners with wins against Liverpool and Manchester City in the FA Cup, they were unable to follow up with a convincing performance, in attack at least. Unable to find a shot on target against a side that has fallen to defeat 21 times this season Arsenal boss Mikel Arteta will know his message about recruiting well this Summer will undoubtedly make it’s way back to the board now.

In this tactical analysis, we will look at the key, tactics, key players and key moments that ultimately saw an Arsenal side who commanded much of the ball with 65% possession fall to a 1-0 defeat. Also, the analysis gives you an in-depth look at how Aston Villa controlled the game out of possession and how the Villans looked to exploited an unorganised Arsenal defence with quick transitions.

Aston Villa: 4-1-4-1
Smith opts for the same starting XI that saw him claim a point away to Everton in the previous game week. What was a 4-3-3 in the previous game week has taken a more reserved shape for this game in a 4-1-4-1 with one holding midfielder, Douglas Luiz protecting the back four. While English talisman Jack Grealish has started on the left finds himself operating centrally and on both flanks when in possession.

Arsenal: 3-4-1-2
In stark contrast, Arteta makes six changes to the side that triumphed over Man City in the FA Cup, 2-0 only a few days previous. Shkodran Mustafi and Keiran Tierney depart from the back three to be replaced by Rob Holding and Saed Kolašinac alongside David Luiz. Wing-backs Ainsley Maitland-Niles and Héctor Bellerín make way for Bukayo Saka and Cédric Soares respectively while Granit Xhaka and Nicolas Pépé take a seat on the bench to allow the fresh legs of Lucas Torreira and Addie Nketiah to bolster the attack.

Gunners build well but fail to fire on target

Although the Gunners commanded much of the ball and territory with 65% average possession, they failed to look as convincing as their build-up when they reached the final third, as their xG of 0.97 would suggest.

Out of possession, Aston Villa would form a mid-block in a 4-4-2 to meet and receive the Arsenal attack at the half-way line. It was superb movement, combination play and quality that saw Arsenal successfully beat the block however it was upon reaching the final third the Gunners had problems.

Conjuring only ‘7’ attempts on goal of which ‘0’ tested the Villa goalkeeper Pepe Reina, Arsenal struggled to show purpose and quality in front of goal, credit still to the defensive resolve of the hosts. 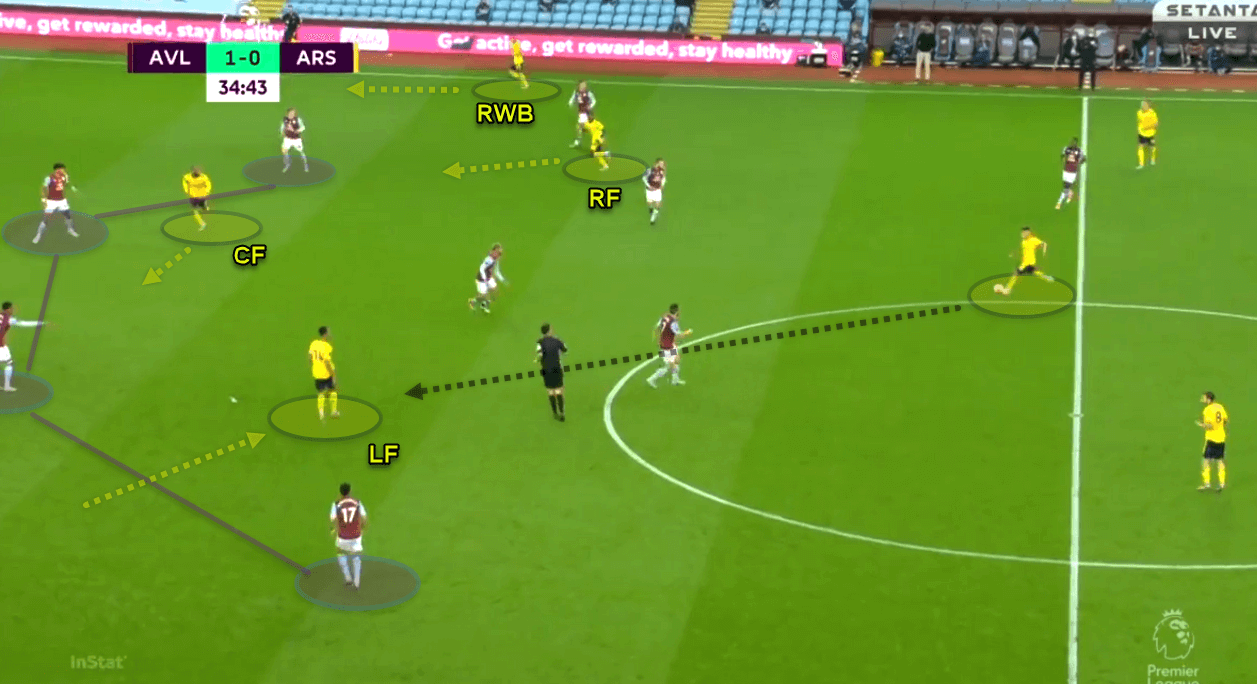 Above we see how Arsenal continuously broke the block and graduated the attack into the opponents final third. Using the overloads from deep against the front-two of Aston Villa, Arsenal would find the space to drive into and play forward passes into midfield. Using a front-five strategy of three forwards and both wing-backs Arsenal were able to unlock the back four of Aston Villa.

As per the image above, we see Pierre-Emerick Aubameyang comes central to receive a pass, as there are already three more players advanced to Arsenal’s right, this then allows Aubameyang to receive the ball unmarked. As well this serves to allow Saka (out of frame on the opposite flank) to receive a long-diagonal pass unmarked while entering the final third. 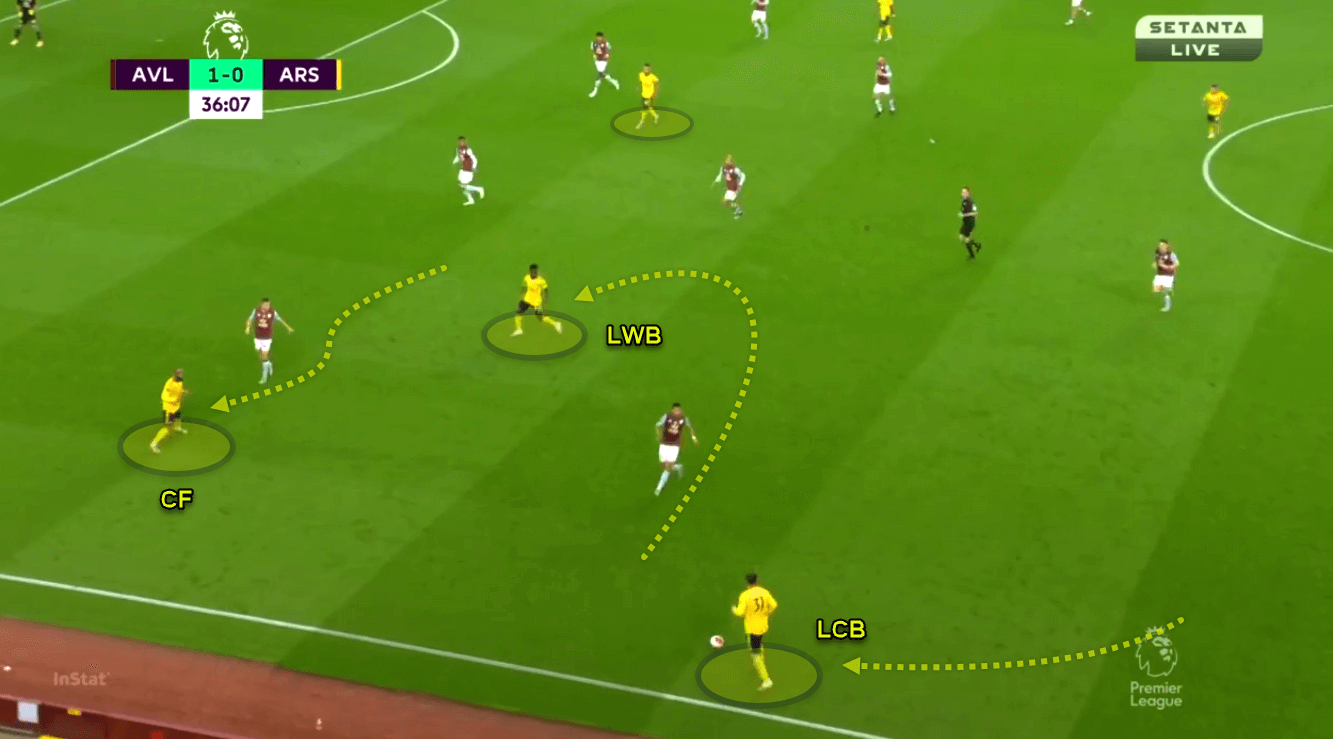 Above we see the type of good inventive movement that allowed Arsenal to penetrate from wide areas.
As the Gunners exercised a lot of horizontal passes, this then allowed the free centre-back to drive forward when space was afforded to him.

Upon entering the final third and meeting the first player to engage the press, ball carrier Kolašinac would have two or more passing options. Centre-forward Alexandre Lacazette and left-wing-back Saka on this occasion make a well-timed horizontal movement to receive a pass unmarked with the opportunity to turn and play forward.

But for lack of quality and good decision making at times, Arsenal might have found themselves in more fruitful positions to score, however, credit still for the defensive solidity and discipline of Aston Villa.

The data above shows us Arsenal’s passing network, accounting for combinations of three or more passes in the final 65% of the field. It is clear Arsenal exercised a lot of low-risk low-reward passes from deep as they looked to build through the thirds.

As a result of being forced into wide areas and having central dribbling and shooting opportunities nullified, Arsenal resorted to a lot of crosses to find the breakthrough, both in-swinging and out-swinging. Aston Villa Helped with superior physicality and height Aston Villa won 60% of their defensive duels.

In the image above, we see Xhaka decides to target the weak side of Villa’s backline to find the run of Saka from left. Aston Villa’s right midfielder gets across in time to make a good defensive header away.

Compact Villans quick on the break

Two deliberate factors were responsible for Villa’s low possession average, yet it served to help them play to their strengths in attack and relive the attacking threat of the Gunners.

From restarts, Aston Villa would play long direct ariel balls to the forwards in Arsenal’s final third where they would crowd the area of the ball’s intended target to breach the Arsenal defence as well as to win and compete for second balls.

Also in the transition to attack, Villa would opt for purposeful attacks forward with lesser numbers in the aim to beat an unorganised Arsenal defence. Carried out by good ball carriers such as Grealish driving at the centre-backs while supporting wingers and forwards would offer themselves as forward passing options ahead of the ball.

Aston Villa made 4 counter-attacks in the game, as well as conjuring 36 attacks in the game of which 7 resulted in attempts at goal (19%) in contrast to Arsenal who managed only 10% attacks resulting in a shot at goal. 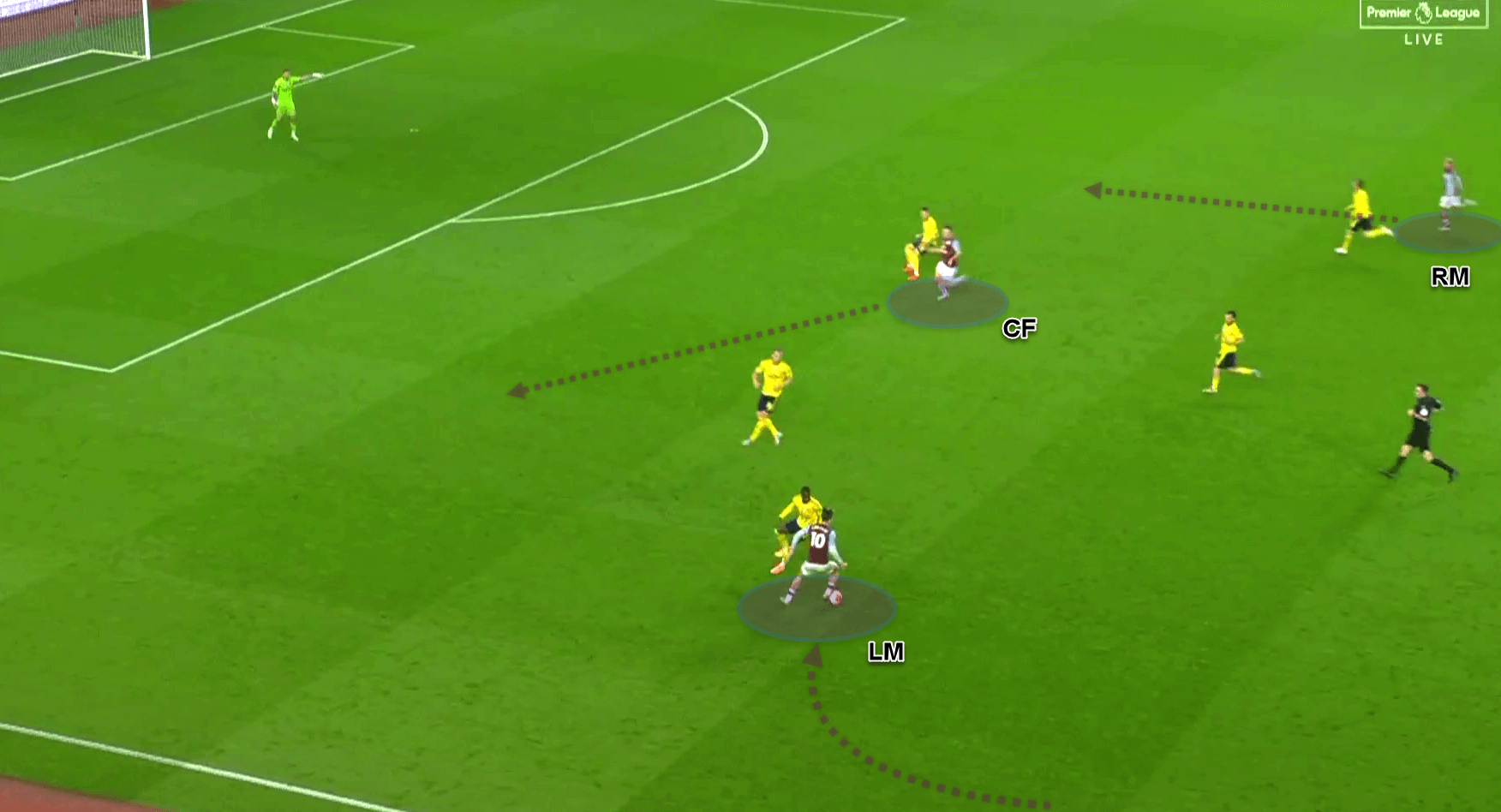 Above, we see a moment Aston Villa go forward quickly after winning the ball back from an Arsenal corner. Villa midfielder Grealish picks up the ball at the edge of his box, seconds later he releases the ball forward into Arsenal’s third meeting the run of the centre-forward.

The data above shows Aston Villa’s pass map in the game, accounting for combinations of three or more passes in the final 65% of the field. Notice the lines are not as dense or as wide-ranging between players in contrast to Arsenal’s pass map. This only highlights more of Villa’s attacking intent to go forward early in the transition to attack. 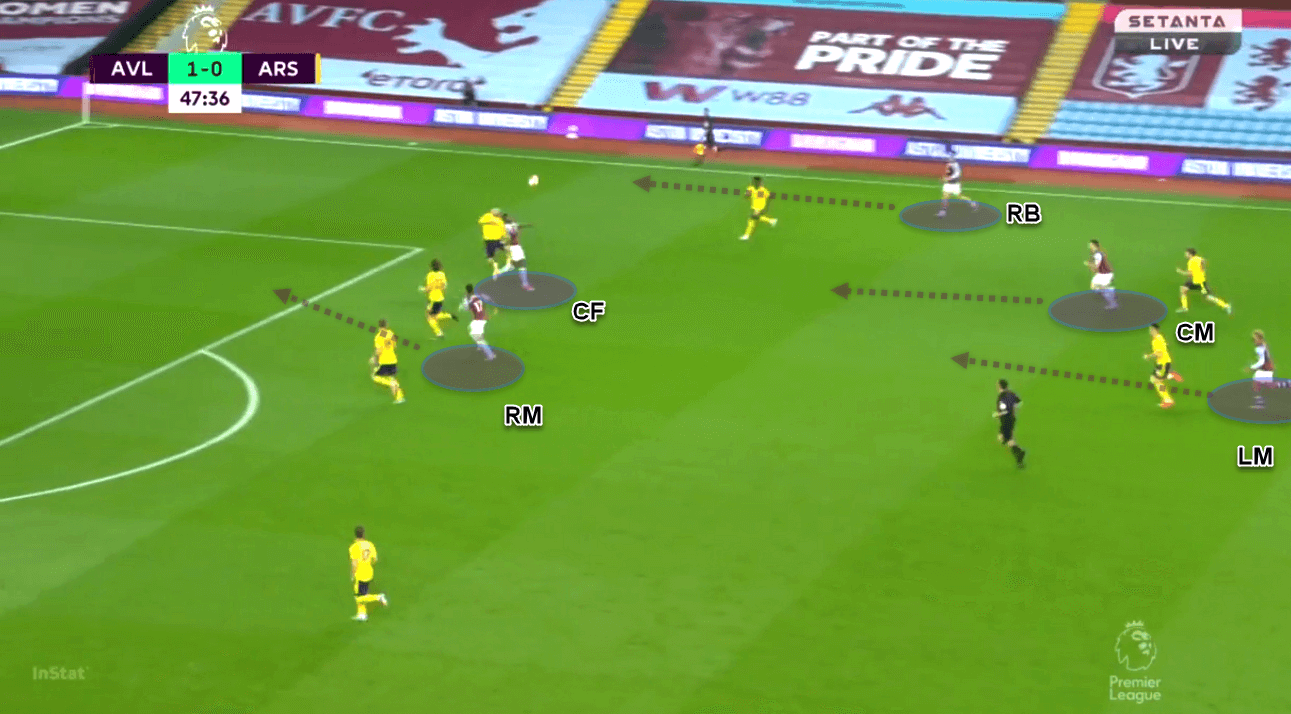 Above, we see how the Villans play for long ariel passes from the restart. Reina could play long passes to meet the head of the forwards on the edge of the Arsenal third. From this point, the Villa players would perform two essential functions, make runs beyond the competing striker while midfielders would move closer to win knock-down headers and loose balls.

Although these in-play strategies did not find Villa any reward ultimately, it was the quality of the execution from an unmarked Villa player in an attacking set-piece which got theirs and the games only goal.

Arsenal forward Nketiah had his header on goal turned away with a ping off the upright to deny Arsenal any success with their best chance on goal, late in the second half. The Gunners had no reply from their defensive error in the first half which ultimately resulted in Aston Villa taking all three points.

Dean Smith has had to tweak tactics and personnel to find success in recent games, this time around it was a success by way of consolidating for the opponents in possession and knowing they needed perfect execution in their limited opportunities in front of goal to take all three points.

Mikel Arteta’s Arsenal welcomes another relegation contender who has on paper at least more to play for when they welcome Watford for their final game of the season. It seems are more dangerous and fruitful in front of goal when they are out of possession, take the recent games against Liverpool and Man City. It is when the Gunners have the lions share of possession, and they face a low-block they struggle to come up trumps.

Aston Villa now requires a favour from the Arsenal they just beat, as the Gunners take on Villa’s rivals Watford, next weekend who are also fighting the drop. Will Aston Villa be a Premier League side next season, with a little help from Arsenal, it remains to be seen.