The final matchday of the 2019/20 EFL Championship is here. No side has officially been relegated yet, and second place is still up for grabs following Leeds’ win. Three teams can be automatically promoted to the Premier League on the final day: West Bromwich Albion, Brentford, and Fulham. The Baggies would require a win versus QPR at the Hawthorns to guarantee their success. This permutation is only possible after Brentford’s shock defeat away at Stoke City on Saturday, in which themselves were in prime position following West Brom’s defeat at Huddersfield Town. Three points against Gerhard Struber’s resurgent Barnsley isn’t easy by any means though.

Barnsley retain hope of escaping relegation. Although the chances are slim, they have a chance following Wigan Athletic’s 12-point deduction for entering administration. Nevertheless, they were victorious over fifth-place Nottingham Forest on Sunday and were unlucky to come away empty-handed away at Leeds recently.

This tactical analysis will conduct analysis to identify the tactics of Brentford and Barnsley in this EFL Championship match. 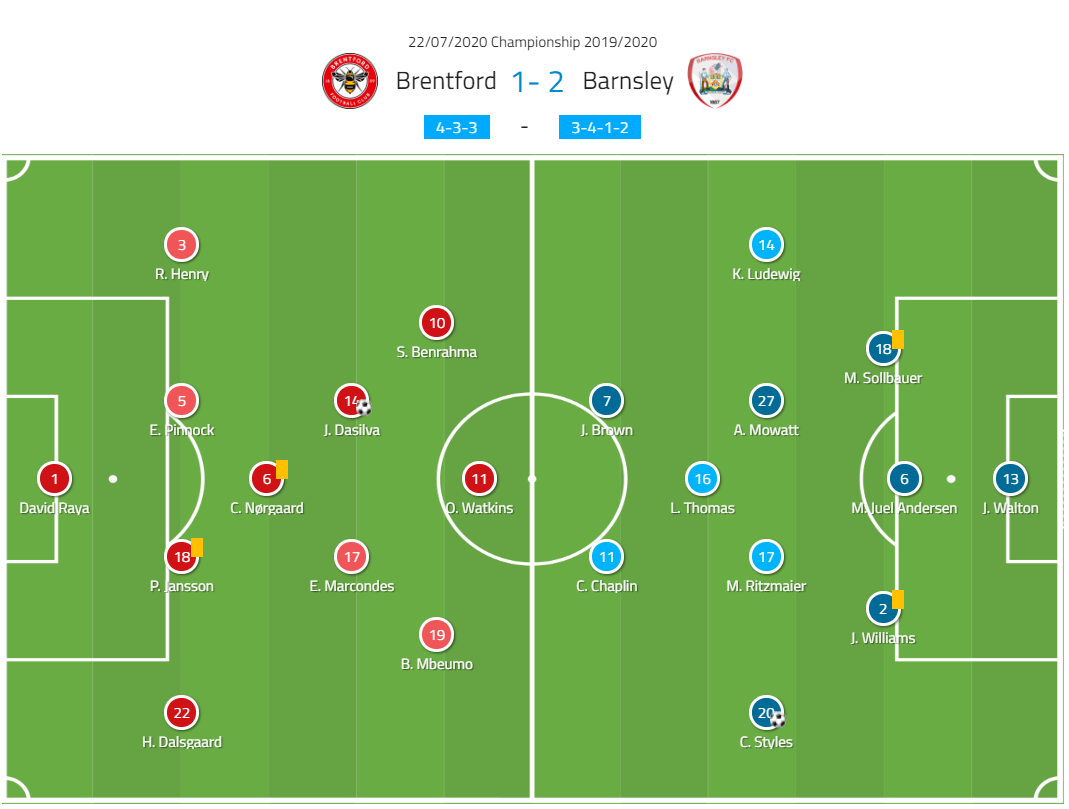 Brentford made one change to the team that suffered a costly loss at Stoke, whilst still keeping their 4-3-3 formation. Emiliano Marcondes was restored to the starting 11 in place of Mathias Jensen. Marcondes has four goals and a goal to his name since the restart. Ollie Watkins with his 25 goals this campaign was in reach of the Golden Boot ahead of kick-off.

Unsurprisingly, Struber opted to keep the same team that performed so excellently against Forest. That consists of a 3-4-1-2 with Conor Chaplin and Jacob Brown as the two forwards, and Luke Thomas immediately behind them as the 10.

The respective sides tactical approaches created a distinctive clash of styles, with Barnsley pressing and Brentford playing out from the back. However, it was Barnsley who had much the upper hand in this duel. They stifled Brentford’s build-up, even with adaptions to the structure made by Frank.

Initially, Brentford began with their usual build-up structure. This involves Christian Nørgaard as the lone pivot responsible for ball circulation and offering options for the defence. Importantly, the Dane rarely dropped in alongside the centre-back pairing of Pontus Jansson and Ethan Pinnock. This contributed to issues Brentford encountered with ball progression. We can see here below how Nørgaard isn’t a viable passing option due to Thomas’ proximity. This is how issues can arise; a single pivot is man-marked forcing build-up to become predictable and rigid, therefore highlighting the need for dismarking movements to occur. 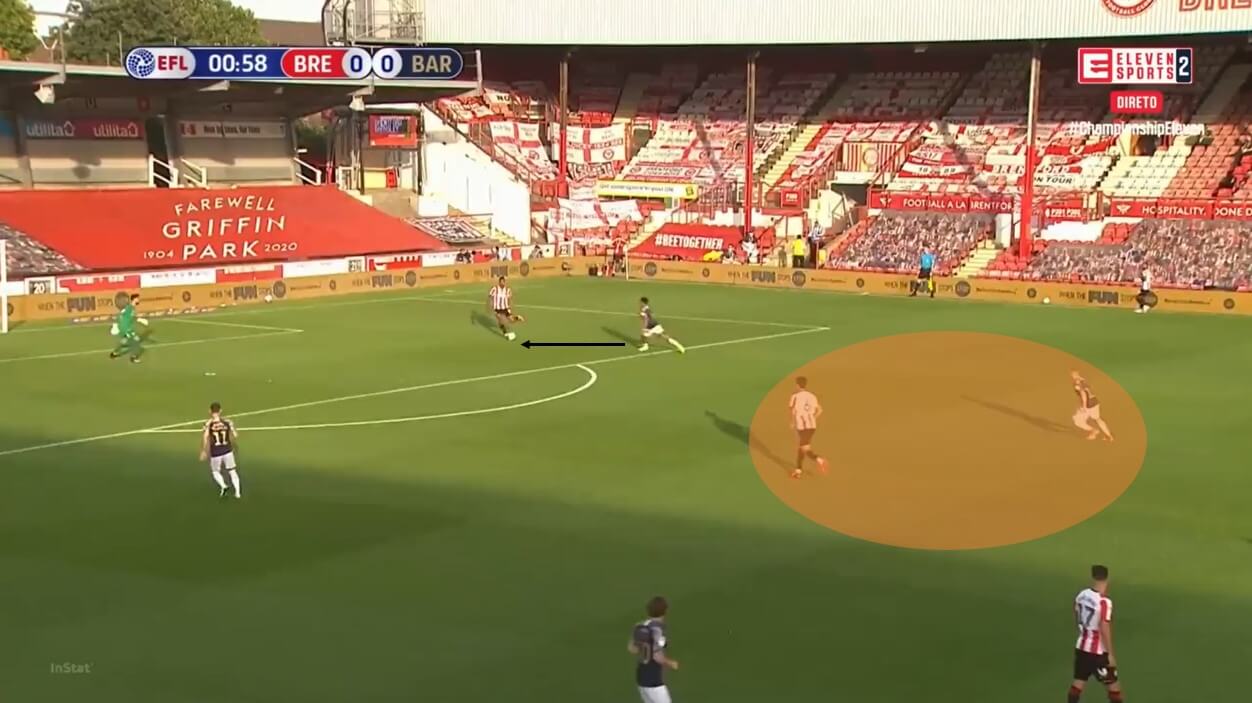 Interestingly, there were moments where Marcondes rotated into a deeper area, thereby creating a situational double pivot. This was in direct response to how Thomas remained tight on Nørgaard which commonly forced play out wide, which was desirable for the Tykes. It was encouraging to see this adaptability from the Bees, which did indeed give them a degree of success. Here below we see how Marcondes has dropped slightly deeper, which results in an increased pressing distance for Marcel Ritzmaier, and Thomas being overloaded 2v1. This extra time allows Marcondes to simply bypass the pressure and pass to Henrik Dalsgaard wide-right. 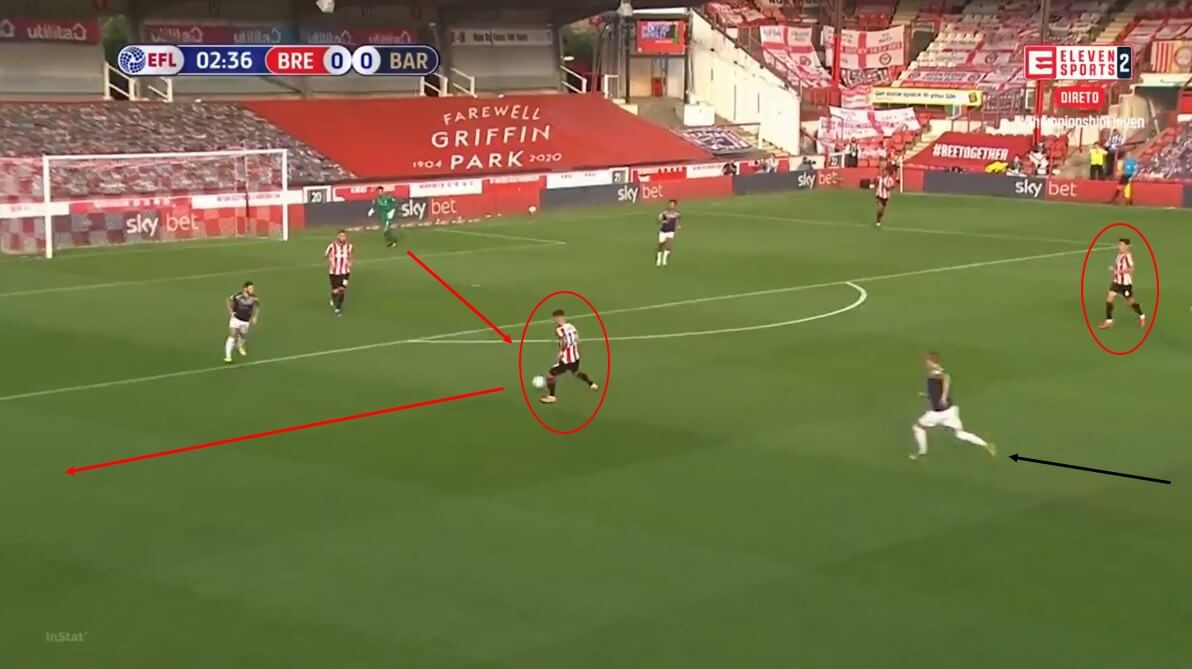 The full-backs were perhaps deeper than we expect from modern sides, although this was in part a reaction to their problems – as they fell back to provide additional passing lanes to evade the Barnsley press. Out of the two, right-back Dalsgaard remained deeper. Left-back Rico Henry had a greater inclination to advance, to counter Saïd Benrahma’s movements inside. The image below shows Josh Dasilva rotating into left-back to ensure balance after Henry moves forward off-screen. This sequence, including Benrahma as well, could have been done more frequently as Henry’s positioning would have seen the Barnsley right-wing-back most likely pinned back, thus allowing Dasilva to receive under less pressure. 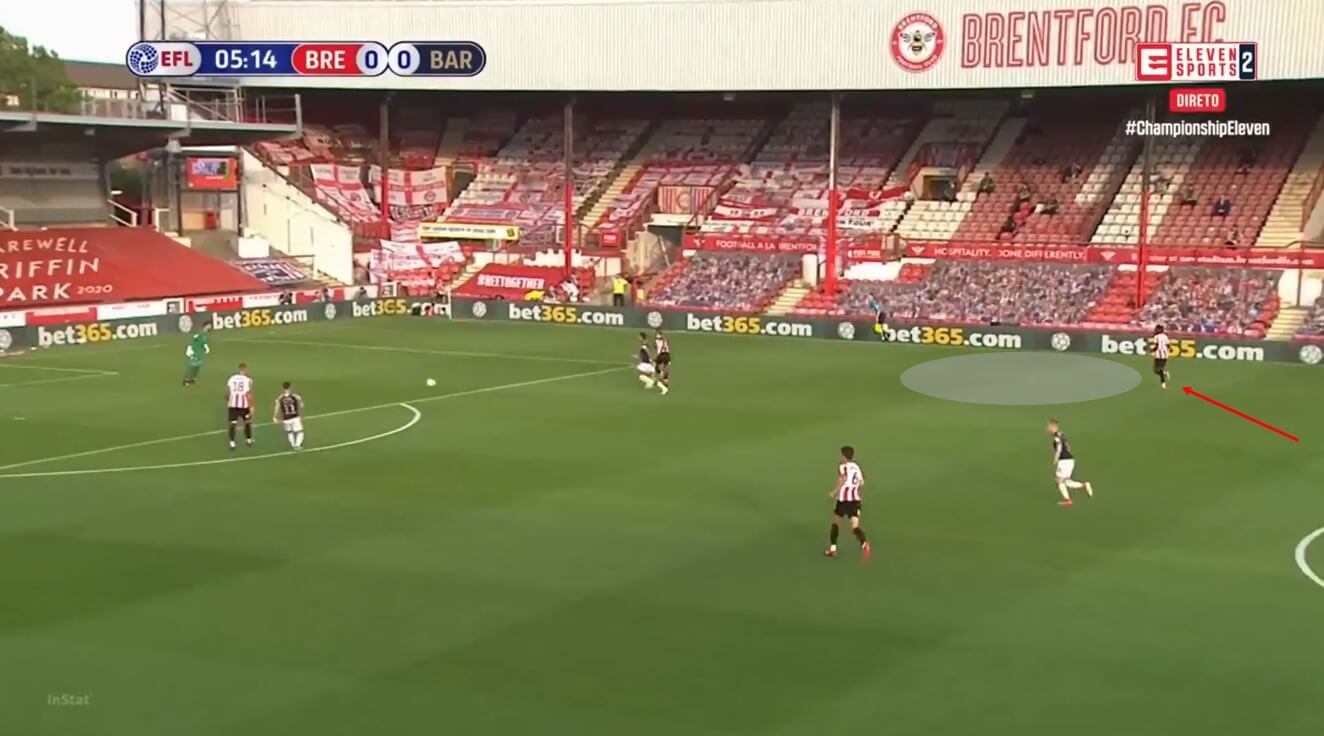 After a while, Brentford realised they were being outnumbered in the first phase of build-up, and subsequently made the necessary adjustments. This involved Nørgaard effectively becoming part of the first line. Consequently, with him splitting Jansson and Pinnock – thereby achieving numerical superiority – the home side were able to access the half-space easier. Indeed, sometimes Barnsley instead preferred to standoff more and not press immediately from a goal-kick, seemingly not willing to commit themselves in situations not optimal for a turnover. 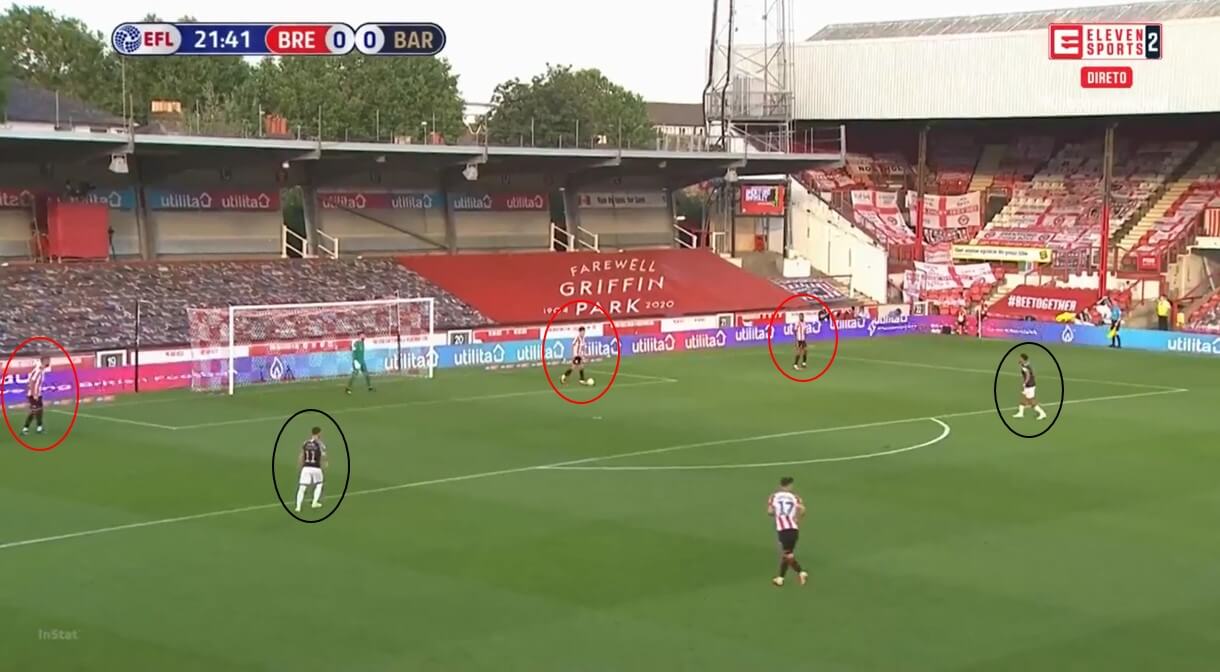 Here is a similar albeit not identical example that illustrates the benefits of Nørgaard taking up a deeper position. In this instance, a triangle has formed, also creating a 3v2. Such a shape generates optimal angles and staggering for ball progression. Here Nørgaard comes just a few yards deeper, and with this attracts Thomas to him, thus releasing Dasilva in the vacated space able to progress through the thirds. 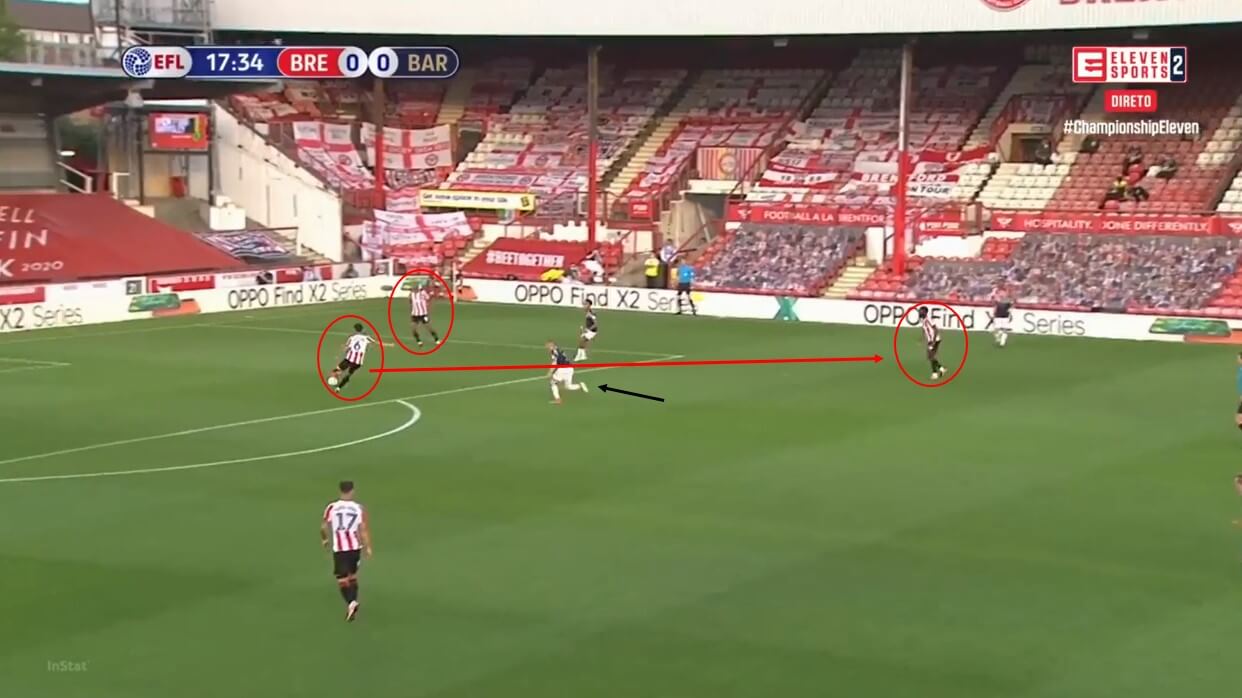 Much of Struber’s tactical philosophy revolves around what his team do out-of-possession, more specifically their pressing. Although the Austrian has often been associated with a 4-1-2-1-2 here he opted for a 3-4-1-2. Nonetheless, there was still occupation of the 10 zone; overloading the central areas, and having various staggered lines.

The press deployed was man-orientated, and although this has its weaknesses the compactness and intensity of the Barnsley press meant they were minimised. As expected, the two forwards focussed on applying pressure to Jansson and Pinnock respectively, whilst curving their run to keep the full-back in their cover shadow. The consequence and aim of this was to guide play centrally into pressing traps, advantageous for the away side due to their intense occupation. 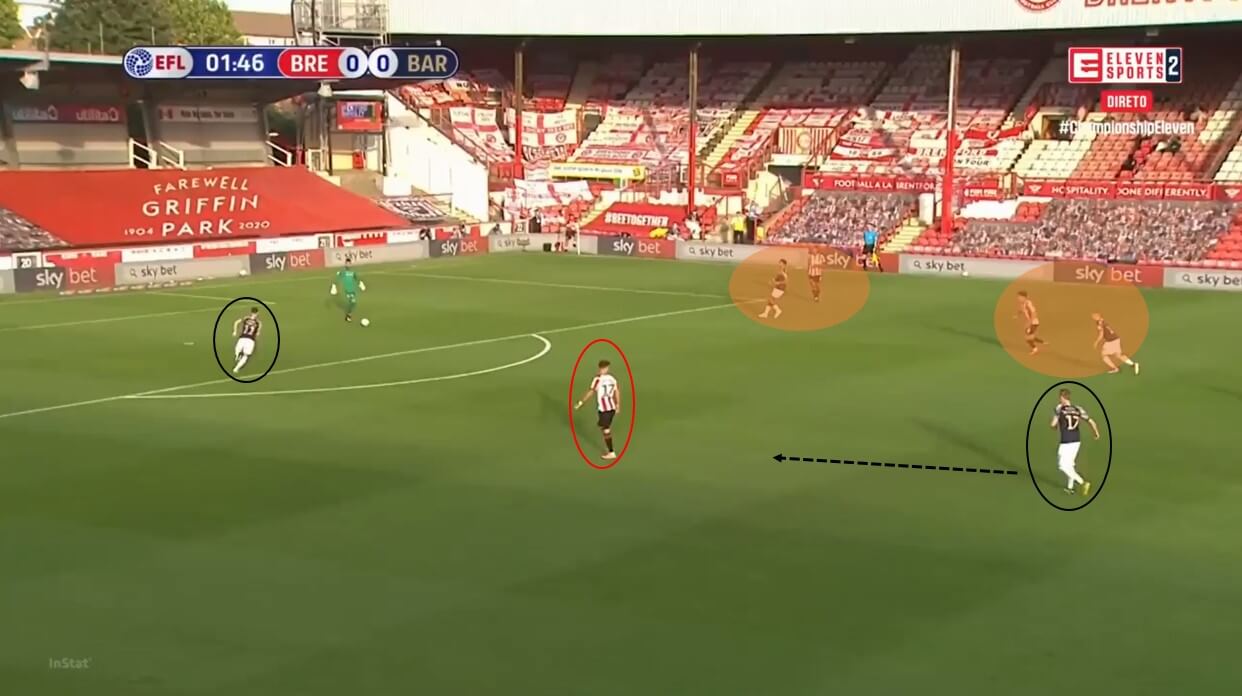 Above portrays a situation that Barnsley looked to manufacture. Chaplin pressures David Raya in goal while shutting off access to Jansson. Furthermore, Brown’s positioning means a pass to Pinnock isn’t on. Thomas is also close to Nørgaard. Therefore, the only option for the Spanish keeper is to Marcondes. However, Ritzmaier can anticipate this, and apply immediate pressure. 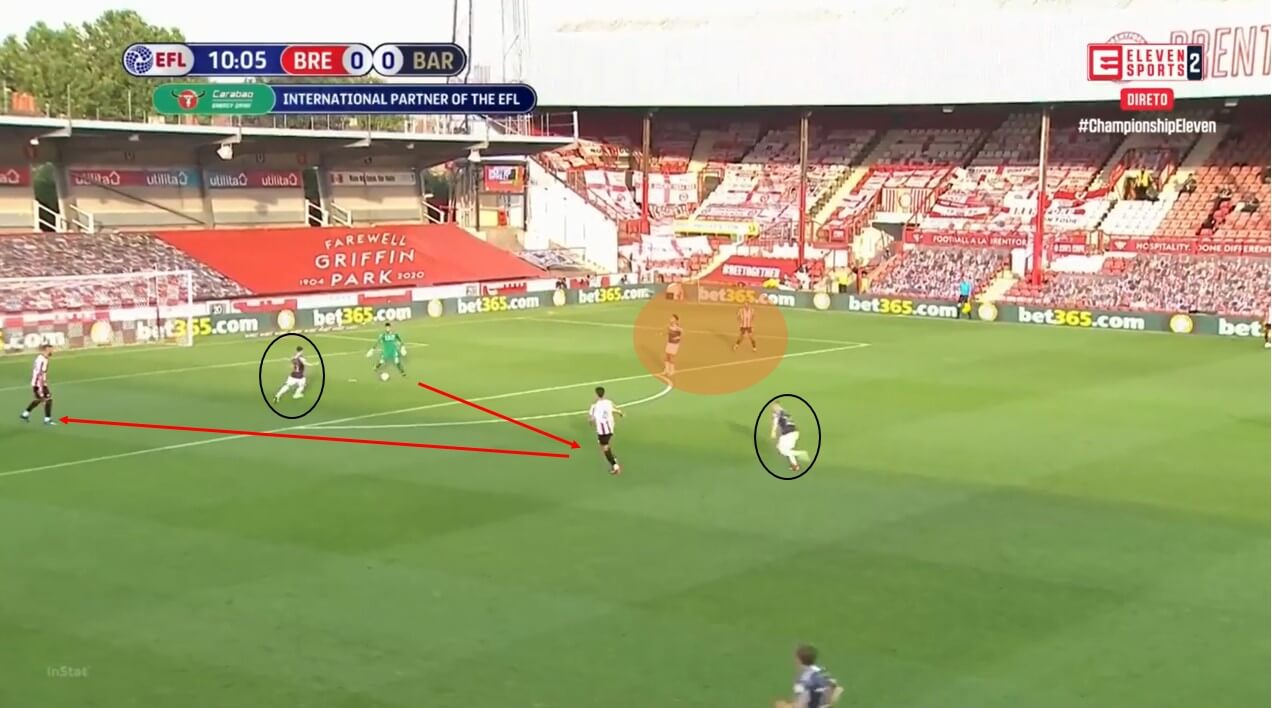 This next example above, and then below, shows a similar situation. Again, the two strikers prevent viable wide access, therefore forcing play centrally. This can allow Barnsley to exploit disorganised defensive transitions from Brentford, originating from a high-quality turnover in midfield. Thomas recognises this opportunity and forces Nørgaard back to Jansson. The Swede, however, plays a poor ball ostensibly in the direction of Benrahma but Alex Mowatt intercepts and passes to Chaplin who is well-positioned. Jansson is also now too wide off-screen. 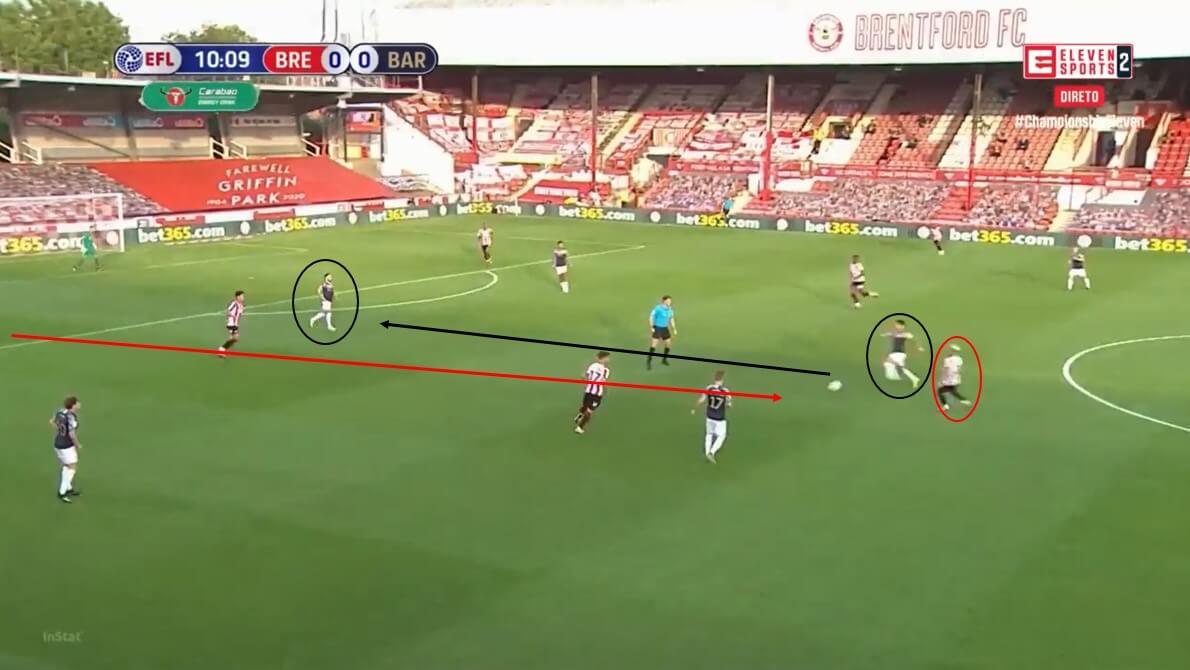 When Nørgaard began dropping deeper as previously mentioned, Barnsley altered their pressing triggers. They acknowledged their numerical inferiority in the first phase and instead chose to be subtler in their actions. For instance, they focussed on guiding Brentford to the wings by leaving those passes open. This area offers few options for ball progression, increasing the chances of a turnover. 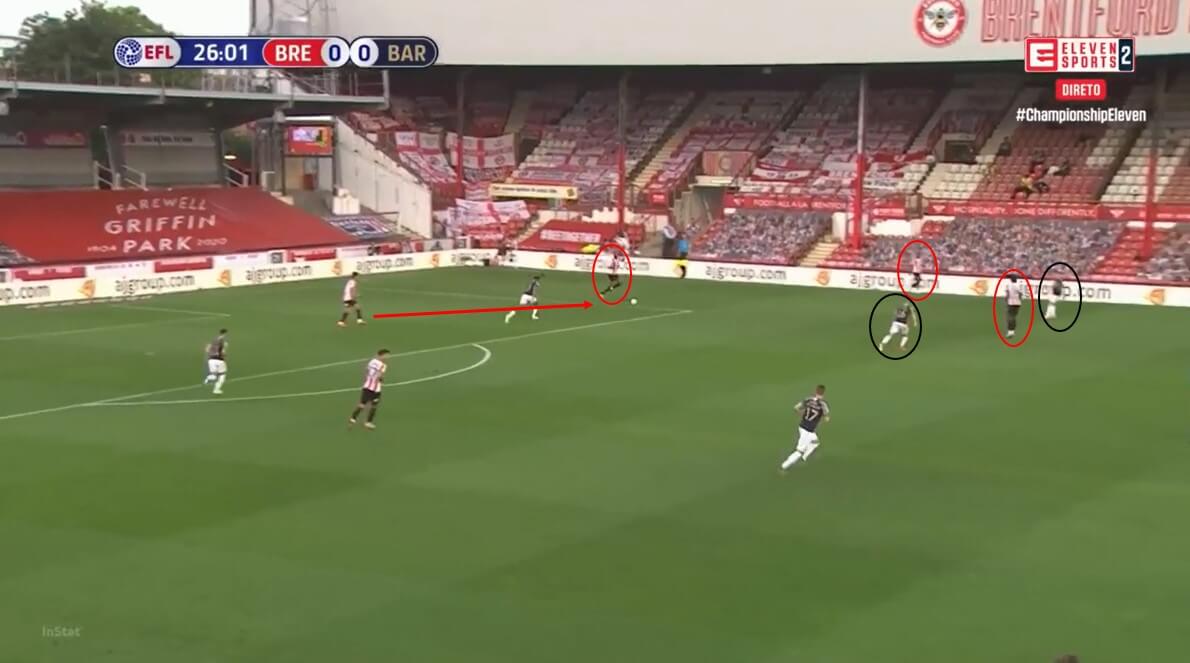 Here above is a great example. Brown initially encourages play to Pinnock from Nørgaard, leaving the ex-Barnsley man with reduced options in less space. Thomas shifts across to mark Dasilva while Kilian Ludewig – the right-wing-back – can press Henry. The absence of any clear passing lane results in Pinnock having to go long towards an isolated Watkins. This demonstrates excellent tactical flexibility from Struber and his side.

Brentford’s efforts to get back in the game

After not registering a shot in the first 15 of the second half Frank switched systems and personnel. This involved the substitution of Henry for Jensen. Subsequently, Nørgaard went into the defensive line continuously with Bryan Mbeumo now playing as a left-wing-back, as well as Benrahma in a more central role.

The three centre-backs could stretch the Barnsley press, and allow access to the half-space with extra time to pick out players in pockets of space higher up the field. Here below we can see Dasilva being located in the right-half-space helps pin Chaplin on the left, therefore giving Dalsgaard more time on the ball to find a teammate. Additionally, Dasilva being wider laterally stretchs the Barnsley midfield, thus hopefully increasing the gaps between them for penetrating passes to be played through. 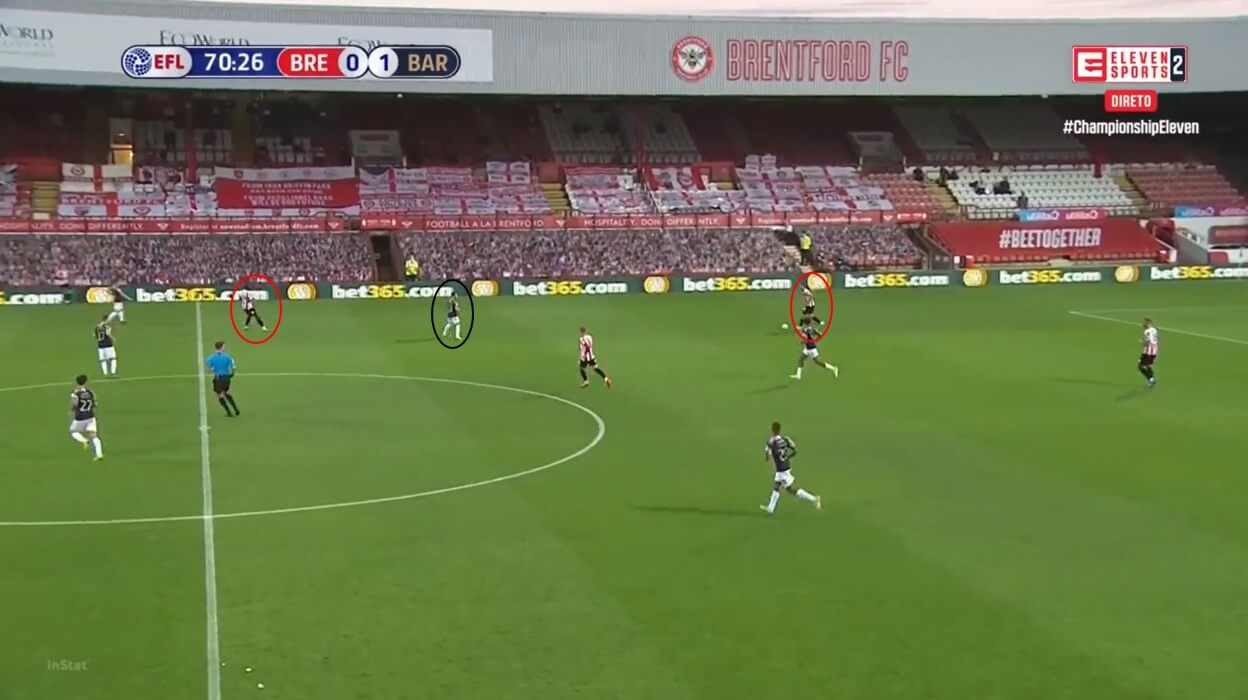 Reported Chelsea target Benrahma was also given the freedom to roam about – indeed he did this to great effect and his mazy run got Brentford up the pitch for their equaliser. We can see an example of his liberty below. The Algerian winger had dropped significantly deeper, overloading Mowatt with Jensen. Nørgaard’s line-breaking pass finds Jensen who finds Benrahma around the corner, who can drive at the defence with his superb dribbling skills. 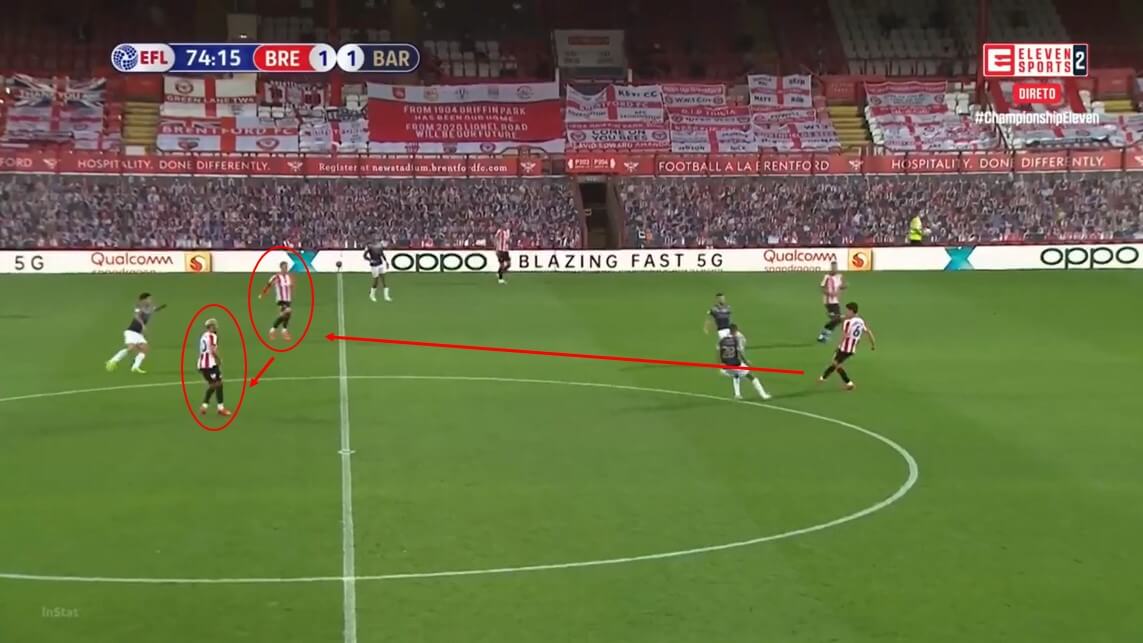 This example shows the two tactical alterations combining effectively. Nørgaard is the wider left-centre-back in the aforementioned three; this gives a better angle into space between the lines. Benrahma, not playing in his usual left-wing position, has taken up such a position. This chimes with my earlier point about stretching the second line, the occupants of that line then engaging, before being bypassed by a line-breaking pass into men between the lines, like that seen here by Nørgaard. 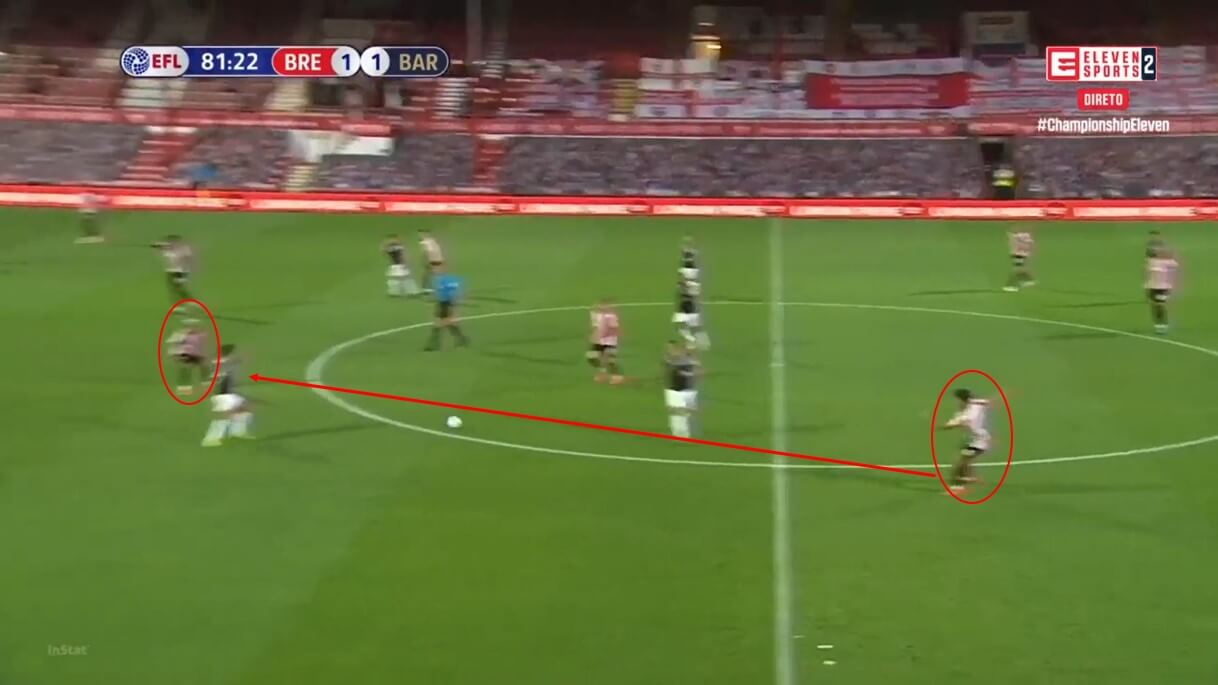 Barnsley performed utterly superbly here, the Tykes stifled Brentford’s usual fluidity and offensive class. Their press was coordinated and intense. There were also flashes of verticality in-possession with overloads generated and progression incisive. Struber has been an excellent appointment and it will be exciting to see what his side can become next season. Brentford, however, never settled and took full control as you would expect from this fixture. They now look forward to a play-off tie against Swansea City, whom they have beaten twice this season already.