Orange County SC welcomed Phoenix Rising to the Championship Soccer Stadium in Irvine, California as play in the USL’s Group B continued. Both teams struggled to get going due to rough turf conditions. While both teams produced close to two expected goals in the match, Orange County and Phoenix had to share the points with two second-half goals leading to a 1-1 draw.

This tactical analysis will examine the tactics used by both Rick Schantz and Braeden Cloutier in their 1-1 draw. The analysis will focus primarily on what both teams looked to do in attack, as well as how Orange County’s press frustrated Rising. 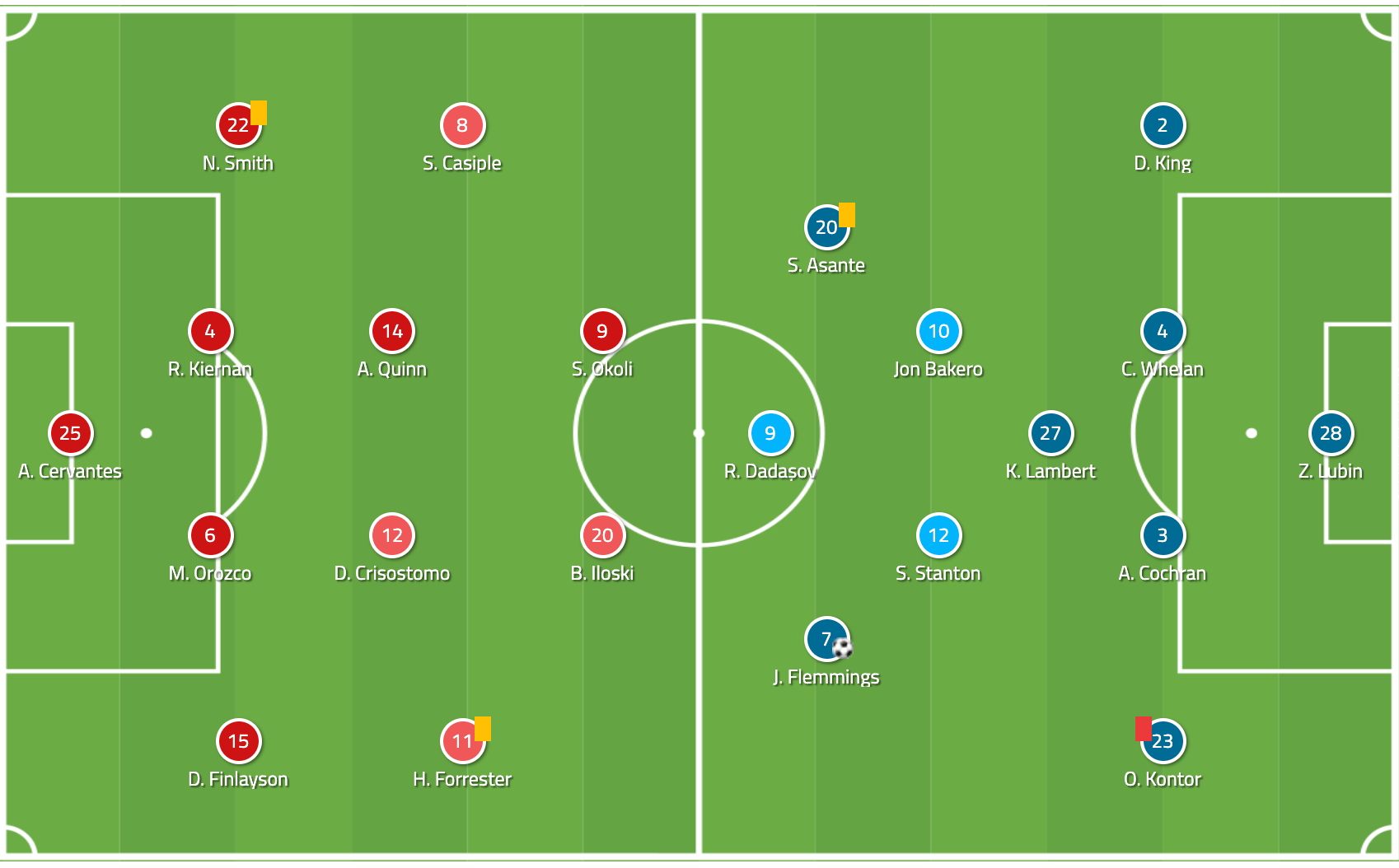 Braeden Cloutier’s team came out in a 4-4-2 formation with 18-year-old Aaron Cervantes starting in goal. Their centre-backs were Michael Orozco and Rob Kiernan, with Nathan Smith as the left-back and Daniel Finlayson as their right-back. Aodhan Quinn and Daniel Crisostomo were the central midfielders with Seth Casiple on the left flank and Harry Forrester on the right. Sean Okoli and Brian Iloski started as the two forwards.

Rick Schantz sent Rising out in a Barcelona-esque 4-3-3 with Zac Lubin in goal. Darnell King started as the right-back, with Corey Whelen and A. J. Cochran as centre-backs, and Owusu-Ansah Kontor as the left-back. Kevon Lambert was the holding midfielder with Jon Bakero and Sam Stanton as the other two central midfielders. The front three consisted of Junior Flemmings on the left-wing, Solomon Asanté on the right-wing, and new signing Rufat Dadashov, who spent time in the lower leagues of the Bundesliga, as the centre-forward.

Rising knew that Orange County would be a tough opponent coming into the game, as they have been a solid opponent for the past couple of seasons. The trend clearly continued in the match as Orange County proved to be a much more difficult opponent than last week’s opponent, LA Galaxy II. Orange County’s focus on attack seemed to be Rising’s left side of the defence, specifically A. J. Cochran and Owusu-Ansah Kontor. This targeting of a centre-back and outside-back is reminiscent of what teams often looked to do against the right side of the defence of the Bundesliga club Bayern Munich. 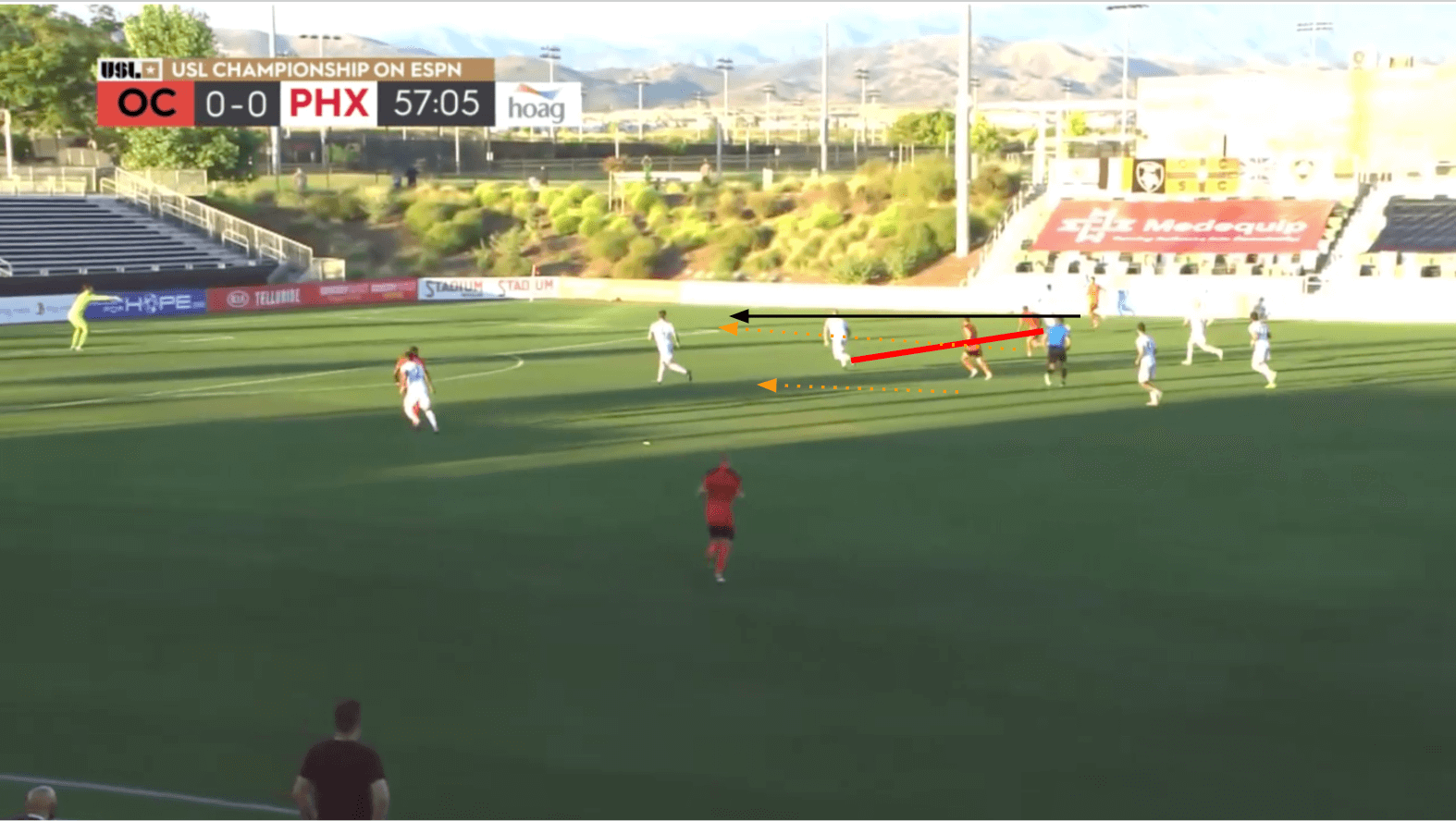 In the image above, Kontor, the left-back, gets pulled out to provide pressure on Orange County’s winger, Forrester. This created a large gap between Konotor and Cochran; Orange County looked to exploit that gap by having Daniel Crisostomo run through, where he was able to receive the ball from Forrester and turn his hips towards goal. These gaps that were created between Cochran and his nearest teammates plagued Rising throughout most of the match. A smart, delayed run by Brian Iloski saw him create space between himself and Whelen, Rising’s other centre-back. Despite getting a shot off, Iloski was unable to capitalise on the opportunity. Orange County continued to target the left side, almost scoring multiple times. In the image below, there’s a prime example of how Orange County attempted to, and ultimately did, score. 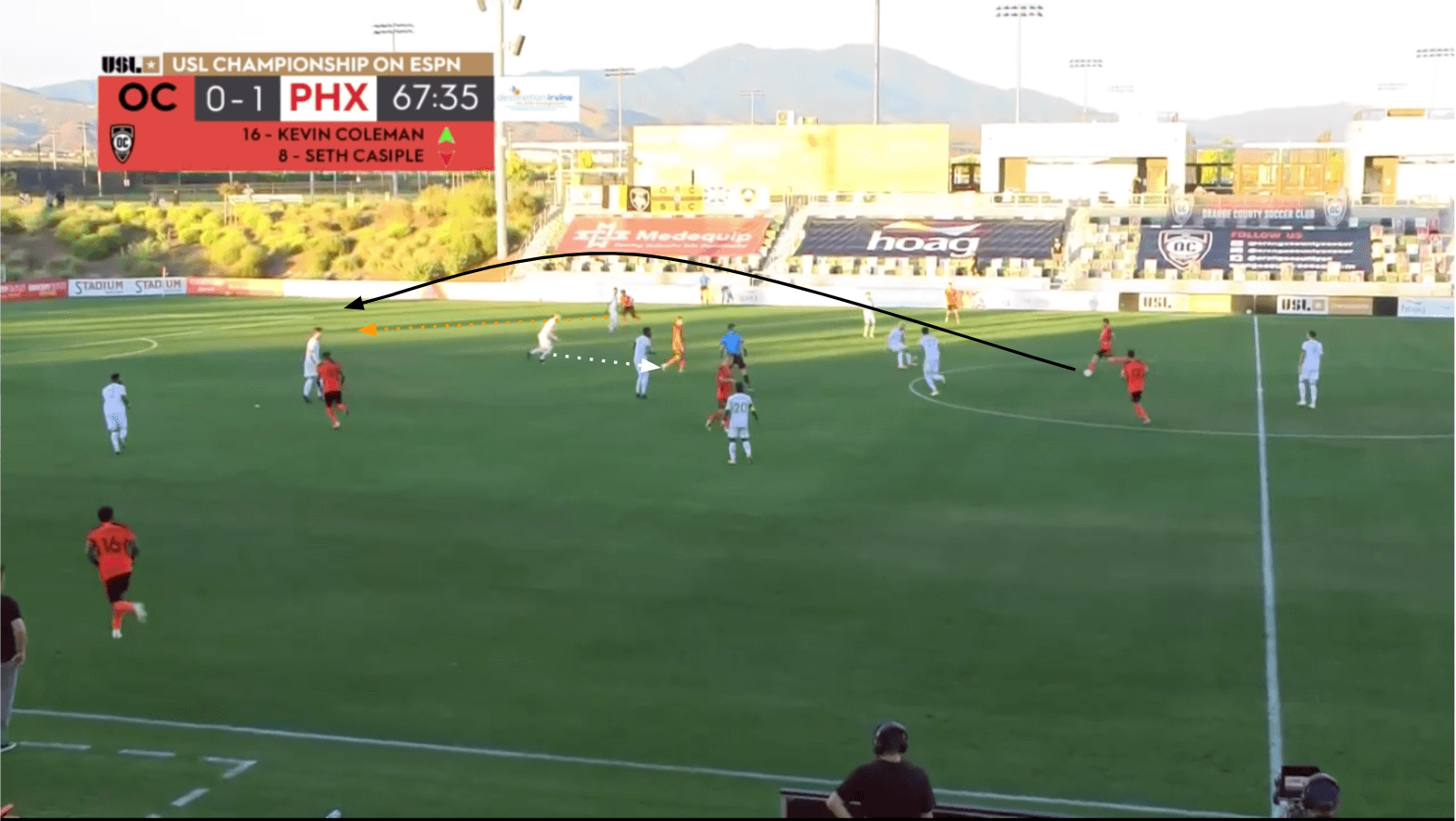 Iloski, the centre-forward, dropped down in between the defensive lines of pressure. As he did, Cochran decided to follow him. This opened up a large amount of space behind Cochran. This movement, combined with Kontor watching the ball and not his man while standing square to the ball, allowed Darwin Jones to get behind the defence and in on goal. Whelen was left defending Jones and was unable to get there in time. Fortunately for Phoenix, Jones was ultimately ruled offside. That being said, the problem was there. Five minutes later, Orange County was able to get Cochran to step forward again, and once again, they played the ball over the top of the defence with Kevin Coleman finishing the chance. 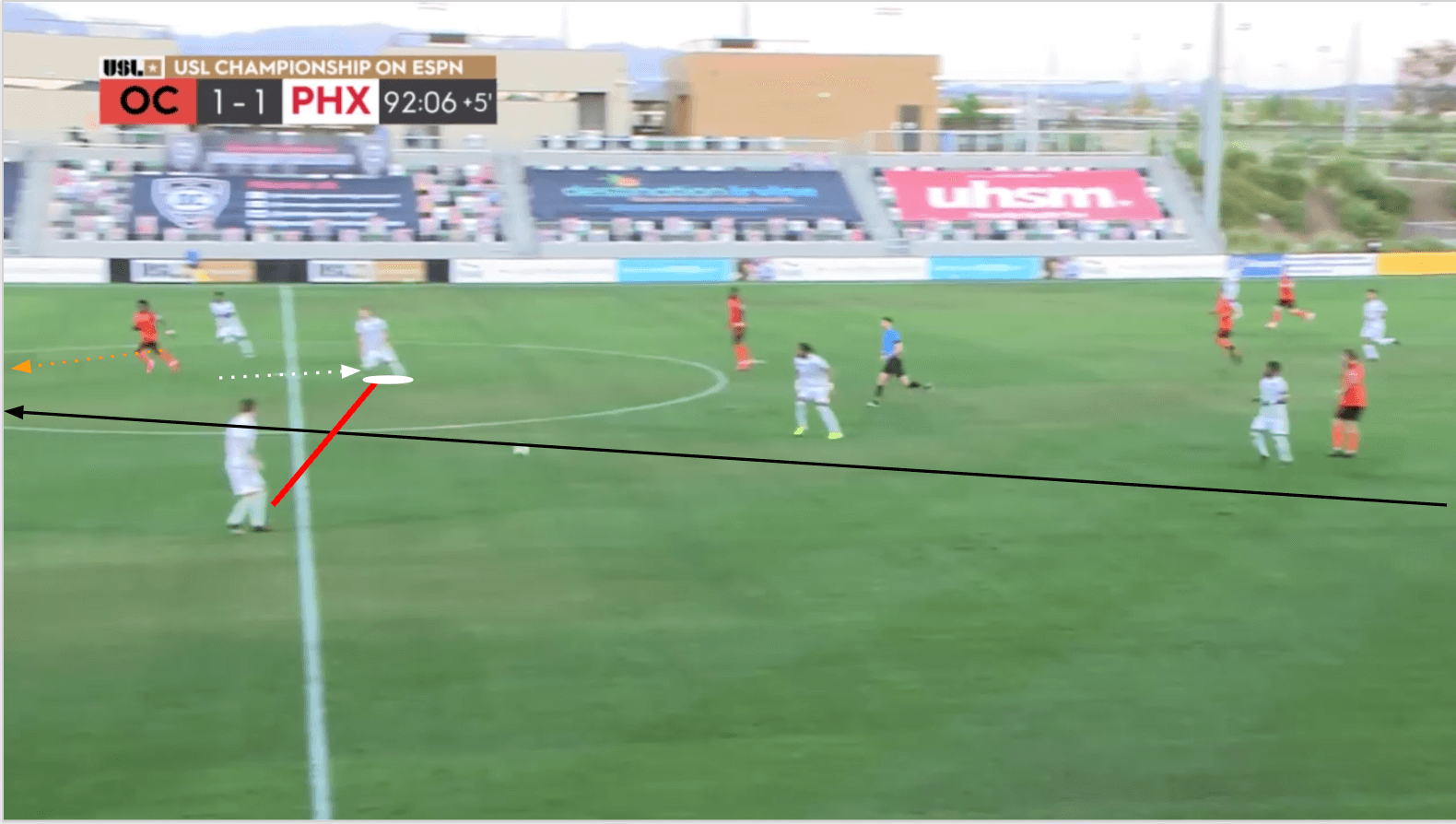 Cochran, marked with the white circle, was essentially standing in Kevon Lambert’s cover shadow, which does not allow him to make a play on this long pass. Not only is he behind Lambert, but he is also too far away from Whelen, his centre-back partner. Because he was pushed forward and too far away from Whelen, he was unable to see Orange County’s Jones, who made a wonderful diagonal run behind the defence. With Jones alone with Lubin, Kontor did the correct thing in fouling Jones outside of the penalty area and earning a red card. While Kontor will miss the next match, Orange County couldn’t convert the ensuing free-kick, and he likely saved Phoenix from dropping three points.

Rising struggle in their build-up 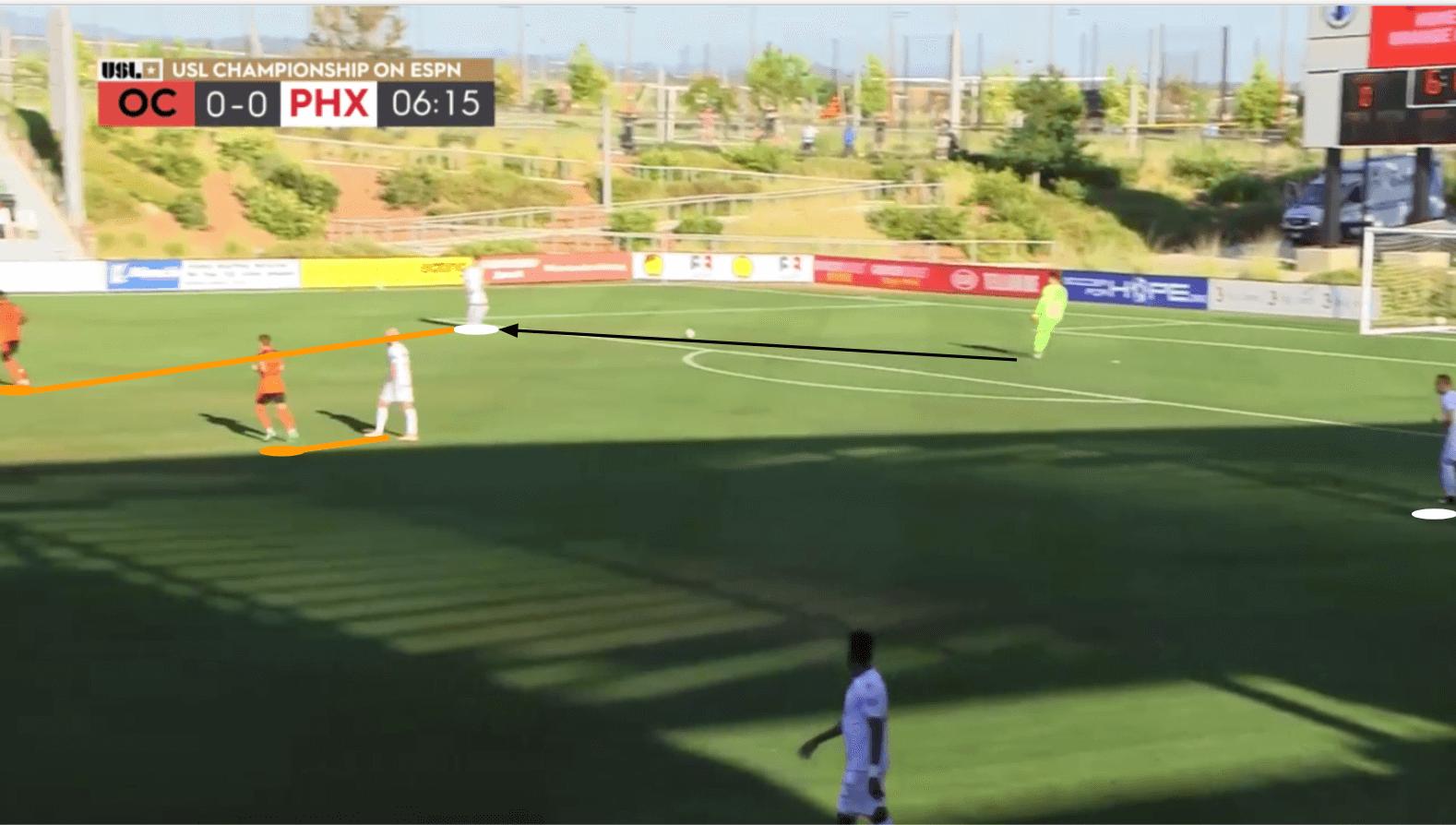 This image, from early in the match, highlights the challenge that Orange County presented. They used their two forwards to deny passes into the centre of the pitch, attempting to eliminate Rising’s ability to play through the midfield. Here, as Whelen received the ball, Iloski marked Stanton, who had dropped to try and progress the ball up the pitch. As Stanton was eliminated as a passing option, Sean Okoli prevented passes into the centre of the pitch. Okoli didn’t need to press Whelen; instead, he used his positioning to cut off entry into the midfield. If the ball switched to the other side of the pitch, Iloski would “pressure” the centre-back and Okoli would cover the holding midfielder. This essentially created an advantage for Orange County, despite having a numerical underload. 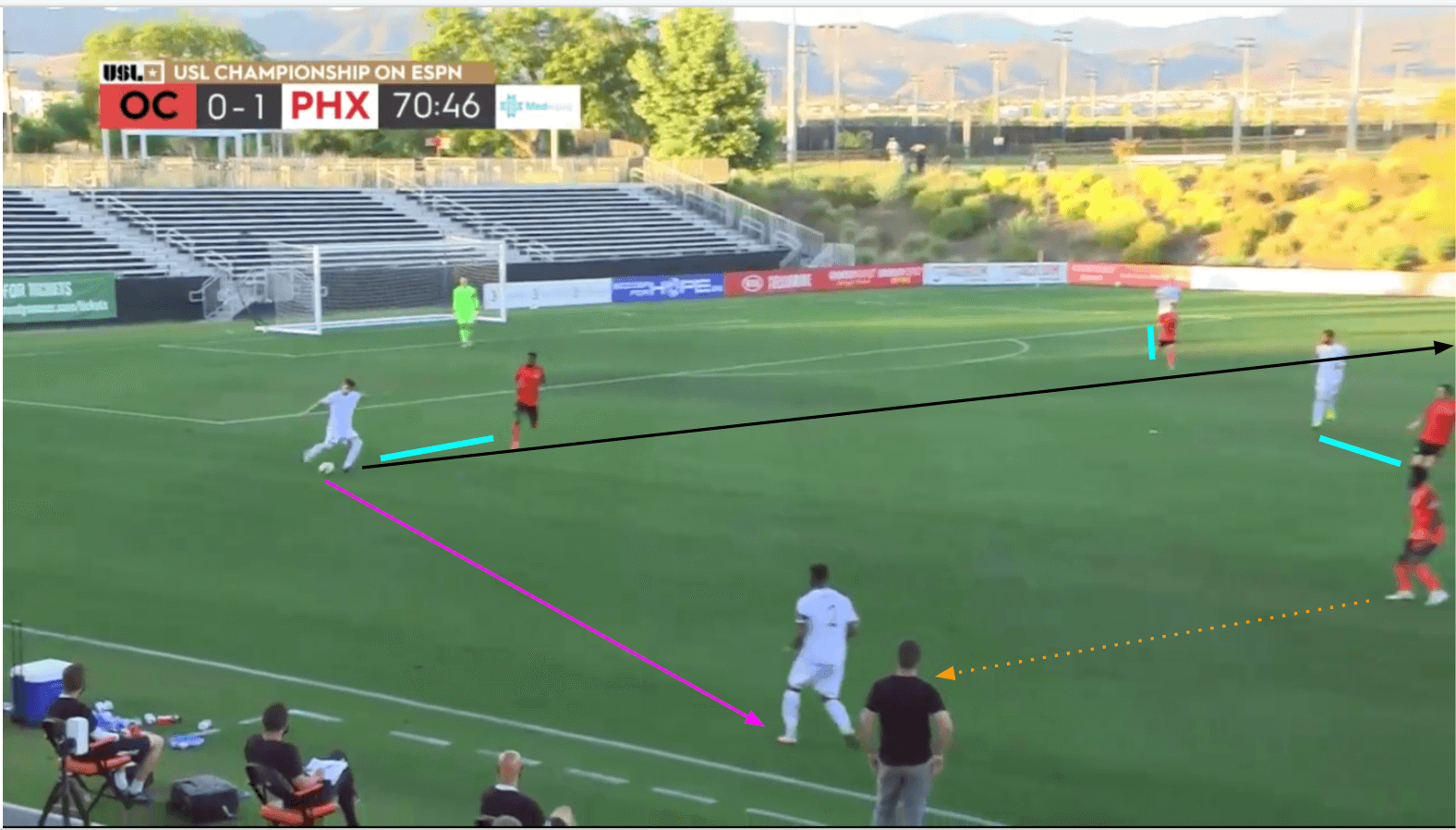 When Rising was able to get both forwards to pressure, this would trigger more Orange County to send more men forward. In the image above, Whelen and Cochran were under pressure. While Lambert is in position to support his centre-backs, he was also marked. Orange County was trying to pressure Whelen to play the ball to King, his right-back. This would allow Orange County to close down and win the ball, as King’s body shape would have forced him backwards into more pressure if he were to receive a pass. Instead, Whelen made the correct call in sending the ball long to his forward, Dadashov. 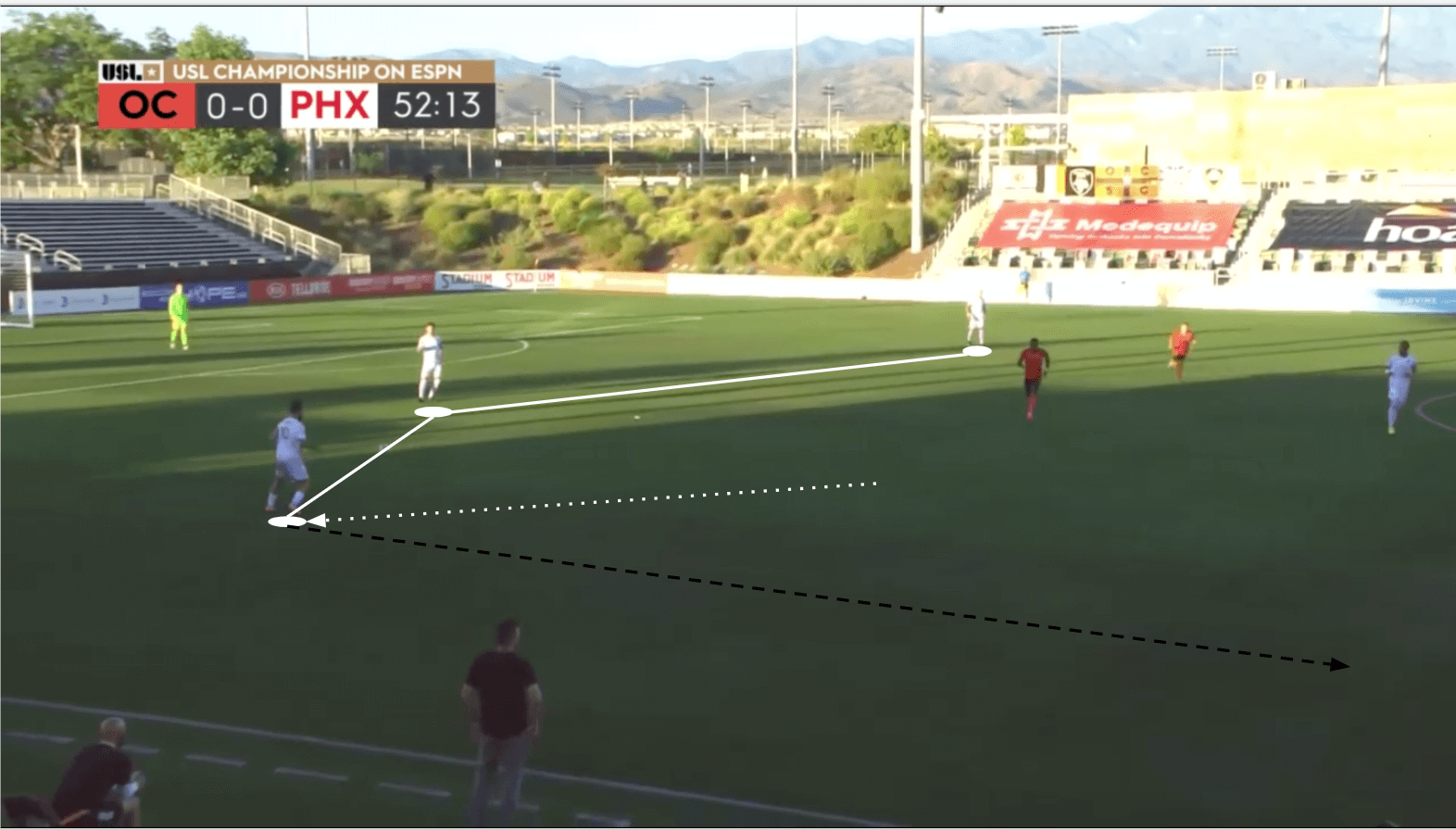 Rising’s solution at times was to drop a midfielder between defenders. Sometimes Lambert would drop between the centre-backs; other times Bakero or Stanton would slot in between the centre-backs and outside-backs. This would essentially create a back three, which allowed them to stretch Orange County’s press and create more passing lanes for themselves. In the image above, Bakero dropped down to receive the pass. After playing passes between the three “centre-backs” in order to move Orange County’s defenders, Bakero was able to progress up the pitch past the first line of defenders with the ball at his feet.

Rising’s most promising chances almost all involved last year’s USL MVP, Solomon Asanté. While he certainly wasn’t solely responsible for their chances, his combinations with his teammates led to some of Rising’s best opportunities. 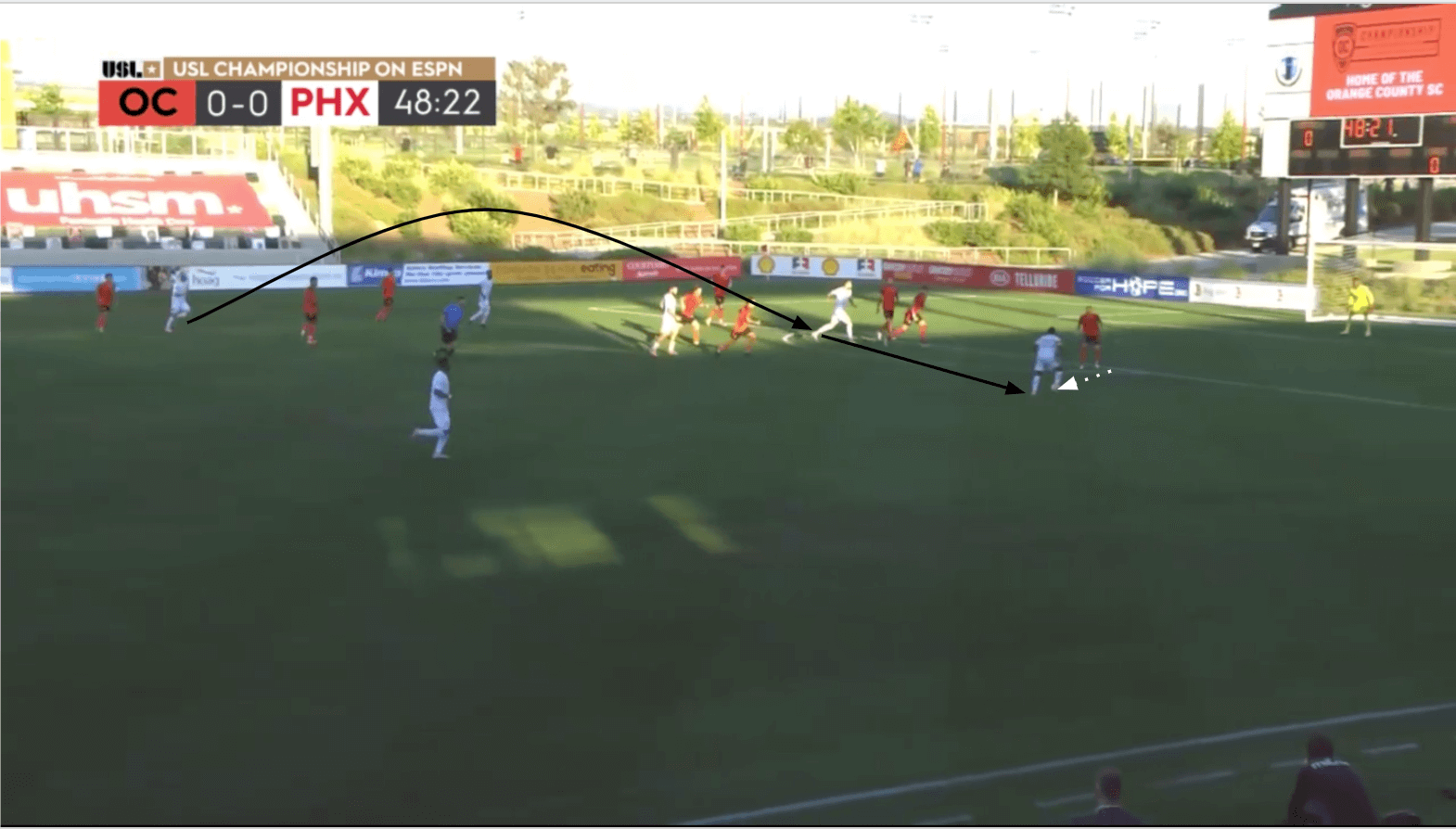 One of the first examples is Asanté creating space for himself by separating from his defender by running backwards, away from the goal. As the ball was played into Dadashov, who was and has consistently been excellent in his hold-up play, Asanté began to drift backwards while the Orange County defence dropped. This opened up a substantial amount of room where Dadashov could easily find Asanté. While his shot was missing a bit of power, Asanté had still created enough space in a dangerous area for himself and his teammates. He had the option of attempting a through ball to Dadashov (which would have likely been unsuccessful), but he also was in the perfect position to be overlapped by Darnell King. While King’s positioning is typically much higher than counterpart on the left wing, he chose to stay put in this instance. 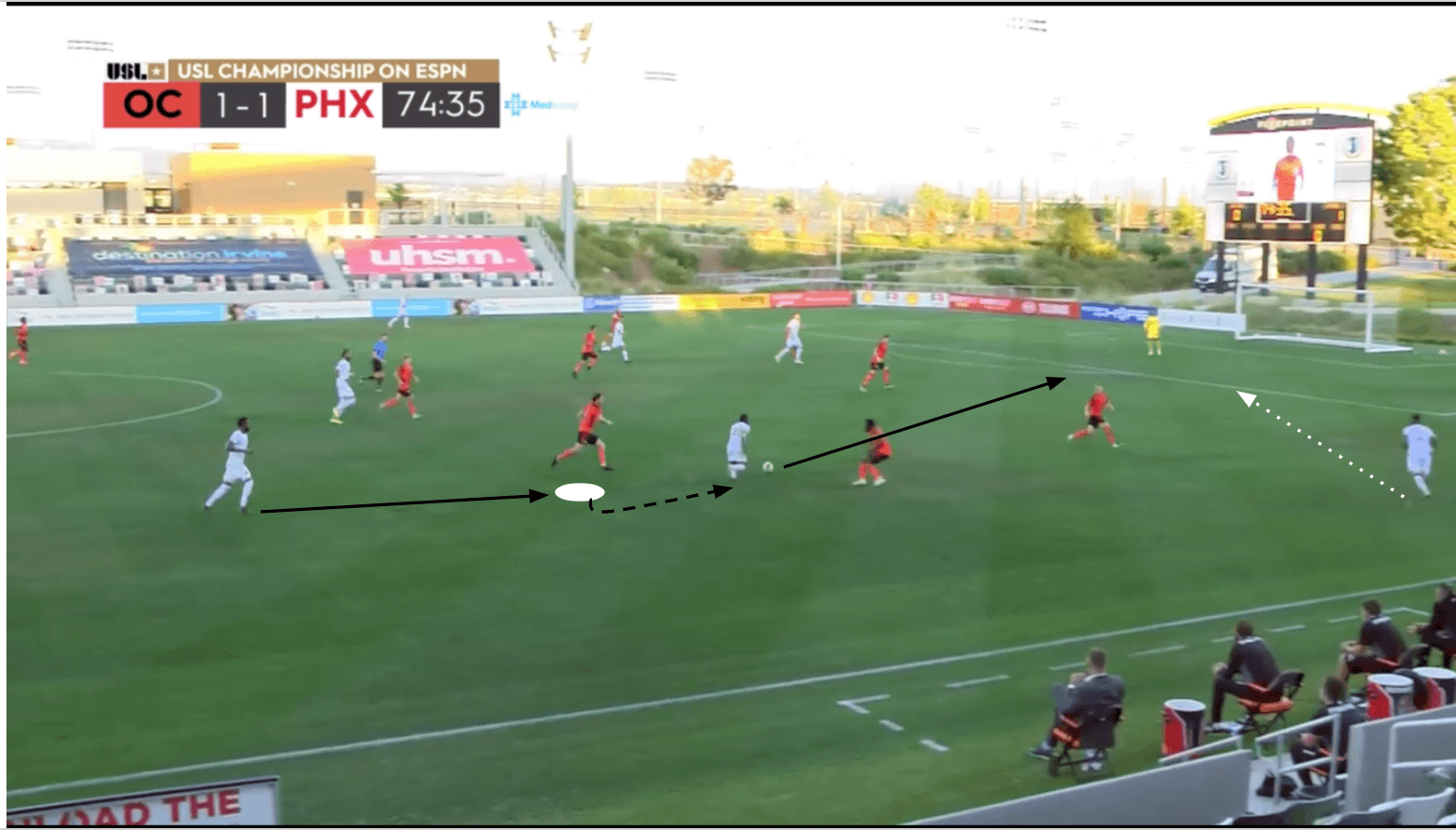 Another example of the threat that Asanté poses to opponents is through his ability to receive the ball in the half-space. In the image above, Asanté received a pass from Flemmings (a pass which was essentially made from the same position as a right centre-back in a back three) in the half-space. Because of his excellent body profile, Asanté was able to turn and dribble, drawing the attention of two defenders in the process. His role in the half-space is so important because it attracts multiple opponents, freeing teammates in the process. In the instance above, Orange County had to scramble in order to just barely prevent his through ball from getting through. This same positioning and manipulation of space is what allowed Rising to earn a corner kick earlier in the match where Junior Flemmings scored their lone goal. 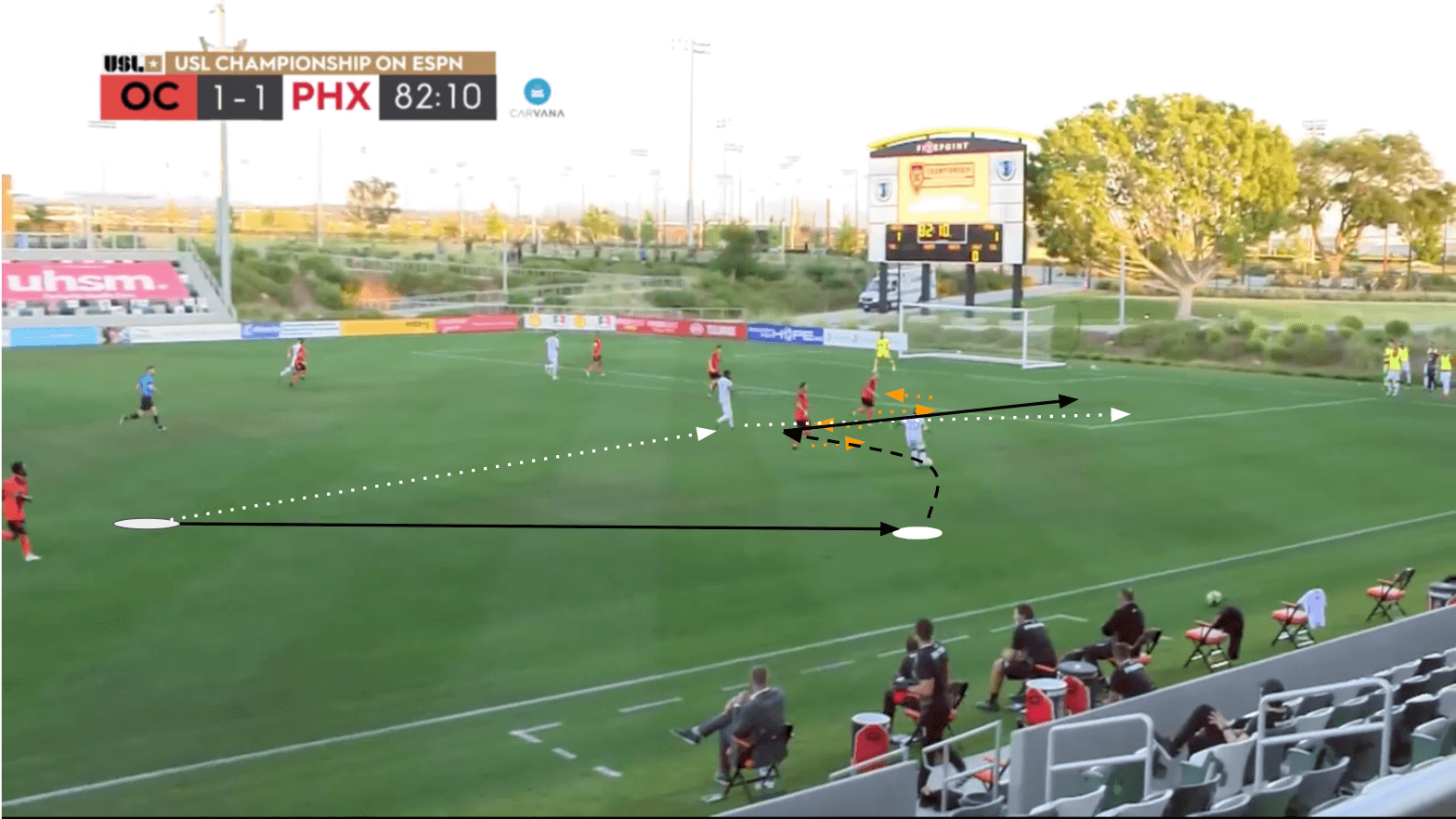 Flemmings and Asanté continued to torment Orange County down the right half-space with the move starting by Asanté again finding space for himself by moving in the opposite direction of the defence. After he received the ball, Asanté was able to engage both defenders, getting them to move outside first before following his cut inside. This allowed Flemmings to make a diagonal run across the defenders. Asanté and Flemmings played a simple 1-2 pass, but Asanté was unable to finish the shot off due to some strong defending from Orange County. Despite that, Asanté’s manipulation of both his opponents and the space they occupied continued to create chances for Phoenix, who were ultimately unable to capitalise on any of them from open play.

While the turf conditions were not ideal, both clubs will be happy to share the points as it was Orange County’s first match back after the break and Phoenix’s first game on the road since the return of the season. One of the unique (and often frustrating for teams) features of the season is that both team’s next match come against one another, as Orange County will again welcome the Rising back to Championship Soccer Stadium next Saturday for their second of three matches as the USL continues along with their new format.