Back in the summer of 2015, Borussia Dortmund paid 1860 Munich £2.25 million for the then-19-year-old central midfielder, Julian Weigl. The German had played since 2010 for the youth teams of the local rival, Bayern Munich.

Weigl developed greatly at Dortmund even though he had to fight with several injuries and has currently a market value of £22.5 million at the age of 23. He already played five times for the German national team even though he has got some incredible opponents for the position in the central midfield with the likes of Toni Kroos, Joshua Kimmich, Leon Goretzka and İlkay Gündoğan. He also holds the record for the player with the most contacts with the ball during a Bundesliga match. Weigl touched the ball 214 times in the game against Cologne in 2016.

This tactical analysis in the form of a scout report will look at his offensive and defensive abilities.

Usually the young German plays either as a defensive midfielder or central midfielder but last season he mainly played as centre-back since Dortmund had a lack of centre-backs due to injuries. In 13 of his 18 appearances in the Bundesliga last season, he was part of the central defence in Favre’s 4-2-3-1. This gets visible when we look at Weigl’s heatmap for these 18 games during the last season in Germany’s first division.

However, even though you had the feeling that he didn’t always feel comfortable in this position, he still performed well last season. Besides, he developed his defensive abilities during the last campaign which can also be seen when we compare his season stats from 2017/18 in which he played 24 times as defensive midfielder and this season’s stats so far.

In the 2017/18 season, he won 59.1% of his defensive duels and just 55.6% of his sliding tackles were successful. In the two Bundesliga games this season he had a success rate of 72.7% in defensive duels and 66.7% in sliding tackles. It’s hard to measure the defensive ability of a player with stats since it’s not easy to clearly divide between successful and failed tackles but in both categories, Weigl made a clear improvement. His new position during the last season forced him to develop his defensive skills which he of course also needs as a defensive midfielder.

Another statistic that shows the improvement of his defensive abilities is how the 23-year-old German this season in 155 minutes in the Bundesliga made just one foul. This would be 0.58 fouls per 90 minutes and game respectively. On the other hand, in the 2017/18 season, he fouled 1.66 times per game. In the example below, Augsburg won the ball high up the pitch just a few seconds ago and start a counter-attack. However, Weigl is able to make a great sliding tackle and doesn’t need to commit a tactical foul due to his defensive skill.

In both games in this Bundesliga season as well during the final of the German Supercup against Bayern and the DFB Cup game against Ürdingen, Weigl played as a defensive midfielder next to Axel Witsel. The image below shows his heatmap for these games. We can see he is permanently positioned in the centre to manage the build-up together with Witsel and be a back pass option when Dortmund is in the final third as we will see later in this analysis.

The German is important for BVB’s tactics during the first phase of the build-up. He and his Belgian midfield partner, as well as the two centre-backs Mats Hummels and Manuel Aknaji, are responsible for the ball circulation and to progress the ball further up the pitch.

Both defensive midfielders don’t permanently stay on their side. Normally, Weigl is the right part of the double-pivot and Witsel the left one. However, as we can see in the heatmap of the German, both try to move in different spaces but especially in the first stage of the build-up both position themselves in front of the back-four to create passing lanes.

Weigl has got all qualities which an allrounder in the central midfield needs: a great technique, the ability to play long-range as well as short passes, defensive skills and vision as well as positional awareness. Especially the two last-mentioned skills are outstanding when we look at the 23-years-old. He can easily find free spaces to position himself in these and create passing lanes, no matter if during the build-up or in the last third as we can see in the example below.

Ürdingen can create numerical equality on the wing, but in the centre, there’s big free space. Weigl positions himself exactly there to receive a pass and tries to play a through pass to Marco Reus with his first touch but the opposition’s defender is able to react quickly enough and intercept the pass. 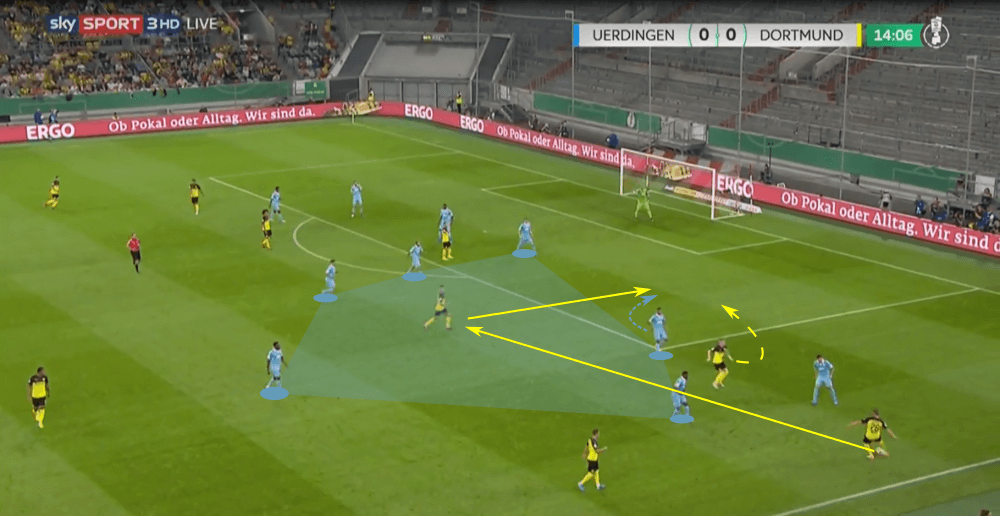 Weigl played this season so far in the two Bundesliga games on average incredible 94.65 passes per game what shows how important he is for Dortmund’s build-up. In addition, 91.4% of them were successful. This high success rate has got two reasons: firstly, he has a great technique and secondly Weigl doesn’t often play risky passes. That doesn’t mean that he almost never plays forward passes. The young German is always looking for an option for a forward pass, but he has the patience to wait until he has a clear and free passing lane.

As long as he hasn’t got such an option, he usually plays safe passes to keep his team in possession, and that’s exactly what Favre wants to see from his defensive midfielders and centre-backs.

The images below show a perfect example for a situation in which Weigl uses his vision and technical ability to get the ball further up the pitch and his teammate into a good position. He receives a pass from Witsel and due to his vision, he notices the free space in front of him. He starts with his first touch a dribble and can bring his body between the ball and the opponent to stay in possession. After that, he plays a simple forward pass to bring Reus into a great position. Besides, he plays the pass slightly forward, so Reus has already some speed when he receives the ball. 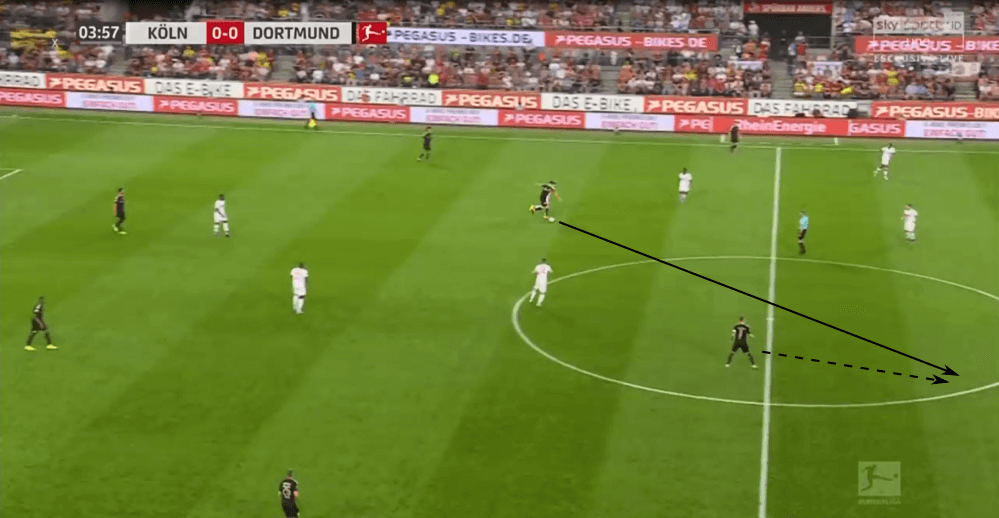 However, there’s one typical move of Weigl which he does pretty often. When the young German receives the ball during the build-up in a slightly advanced position on one side, he just needs one or two touches to be in an open position to play either a forward pass or switch the side. He often switches the side with a great long pass like in the images below.

He perfected this move during his time under Thomas Tuchel. In that time, Dortmund often overloaded one side to lure the opposition to shift over to this wide area to create free space on the opposing wing. As soon as the opposition shifted over, they tried to quickly switch the side with a long pass, which was often Weigl’s task. To be able to do this as fast as possible, the German should make as few touches as possible and so he developed this movement. And now he does this several times during a match and it looks incredibly easy and is very effective.

Weigl in the final third

When BVB reach the final third, the wingers and full-backs position very wide and they circulate the ball until someone is in a good position for a through pass or a cross. Weigl and mostly also Witsel try to position a bit outside the opposition’s block to have a good overview and provide an option for a back pass. When they receive the ball, they mostly just switch to the other wing.

However, their positioning has got another advantage: they are in the perfect position to stop counter-attacks very early. 44.4% of Weigl’s recoveries took place in the opposition’s half which is a good indicator for his ability to win the second ball and avoid counter-attack opportunities for the opponent.

When he receives the ball further up the pitch you can often see a similar movement which was already described in this analysis. He needs one, or at most two, touches to have the ball in the right position to switch the side.

In light of this, Dortmund force the opposition to constantly shift from one side to the other and so they get tired and so BVB force them to make mistakes. As soon as the distance between two opponents is too long and a gap opens, Dortmund try to take advantage of it.

In the example below, Weigl receives a pass from Jadon Sancho who instantly starts a diagonal run. His opponent notices it and tries to close the passing lane back to the Englishman. However, the 23-year-old midfielder is already one step ahead. He makes some kind of a fake pass to distract the opponent who wanted to cut off the option to pass back to Sancho. This movement gifts Weigl time to get a quick overview of the situation and he can play a long pass and cross respectively to find Thorgan Hazard.

Weigl so far is harmonising perfectly with Witsel in front of the back four. These two could be a key factor if they want to win the league this season. As this scout report showed, he has got all the abilities that a defensive midfielder needs and developed his defensive skills last season to become an even better all-rounder.

Currently, it looks like Favre is a big fan of the German and it’s likely that he will play in the majority of the games this season. Maybe these appearances can help him to show Jogi Löw what a great player he is to be considered more of a regular part of the German national team.