1.FC Cologne: Can they stay in Bundesliga? – data analysis

1.FC Cologne finished 14th in German Bundesliga last season with as many points as FC Augsburg that finished 15th. After the arrival of Marks Gisdol as new head coach, the team was stabilized and could break out of the table basement. That is why Gisdol will stay as head coach in the new season. However, the second year in the Bundesliga is often called the “most difficult” one. So, can Cologne stay in Bundesliga for another year?

In this data analysis, we will take a closer look at 1.FC Cologne´s squad, their players´ data, and statistics. Furthermore, this analysis will provide you with Cologne´s playing style.

First of all, we will look at the squad structure and the width within the team. As you can see in the image below, Cologne´s current squad list has 29 names. It is outstanding that they have too many centre-backs as 8 out of 29 players are able to play in that position. It is the highest number of centre-backs in a squad compared to any other Bundesliga team. Looking at the other positions in the team, Cologne is rather weakly positioned. They have 2 full-backs for each side as well as only 2 central offensive midfielders and 2 strikers in their own ranks. That is not adequate. Especially by regarding the tight schedule this season, Cologne will get problems because of their load control. 5 winger (3 right-wings and 2 left-wings) and 3 goalkeepers complete the squad list. 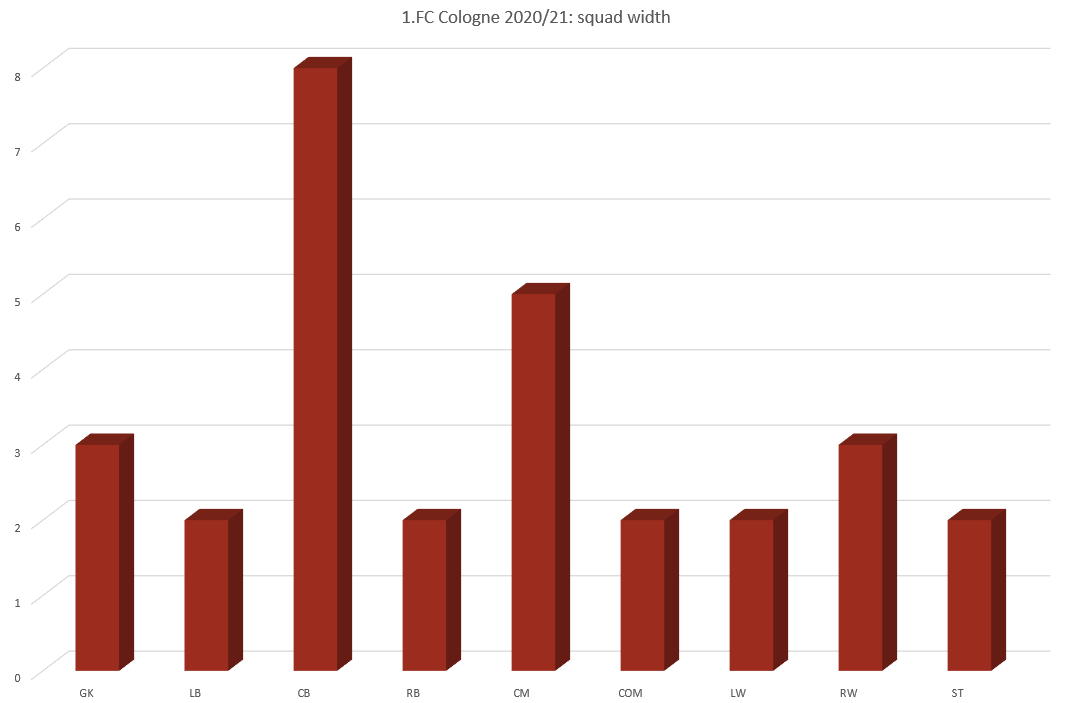 Timo Horn (27) got a new competitor with the signing of former German international Ron-Robert Zieler (31). After some good seasons, Horn faltered in many matches during the last two campaigns. By taking a closer look at his statistics, Horn does not provide lots of goals saved above average numbers. However, even if the two Germans fight for the spot between the posts, Horn seems to lead the race. Now, as he is at the peak of his career, he might be able to perform at his highest level again. With Julian Krahl (20), a young talented goalkeeper will be Gisdol´s third choice. 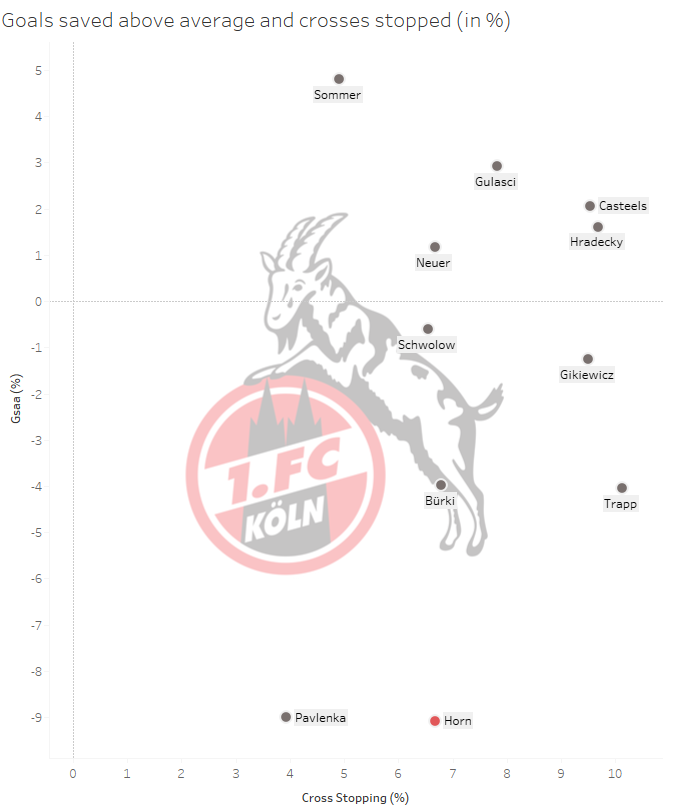 As already mentioned earlier in the squad width section, Cologne is overstaffed in their central defence. Sebastian Bornauw (21), Jorge Meré (23), and Rafael Czichos (30) are fighting to get the two spots in the starting eleven whereas Frederik Sörensen (28, returns from loan at Young Boys Bern), João Queirós (22, returns from loan at Willem II), Robert Voloder (19, own youth academy) and Sava-Arangel Cestic (19, own youth academy) are their back-up options. Considering Voloder and Cestic able to play for the U23, Cologne´s squad list would only have 27 names. However, Czichos and Bornauw both provide quite good stats in terms of aerial duels and clearances as they are pretty much average compared to the best centre-backs in Bundesliga. 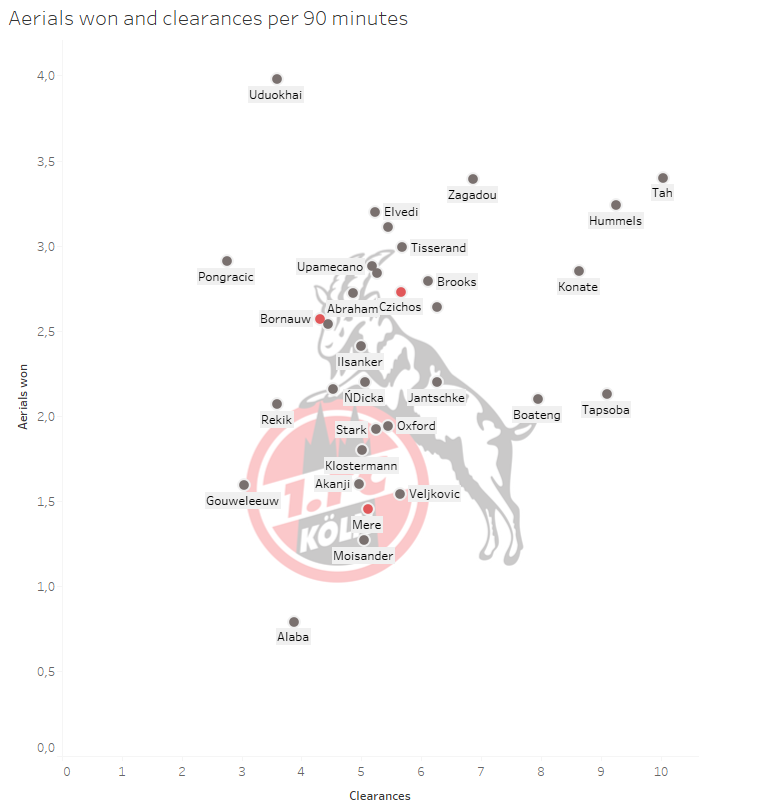 Cologne have 4 options for their full-back positions, 2 on each side. Noah Katterbach (19) played a very good debut season and will be Gisdol´s first option on the left side of the pitch. Katterbach´s back-up will be Jannes Horn (23, returns from loan to Hannover 96). On the other side, Kingsley Ehizibue (25) and Benno Schmitz (25) will fight for a place in the starting eleven. Even if Schmitz provides better stats in terms of successful pressures and progressive distancer per 90 minutes, Ehizibue was set last season. 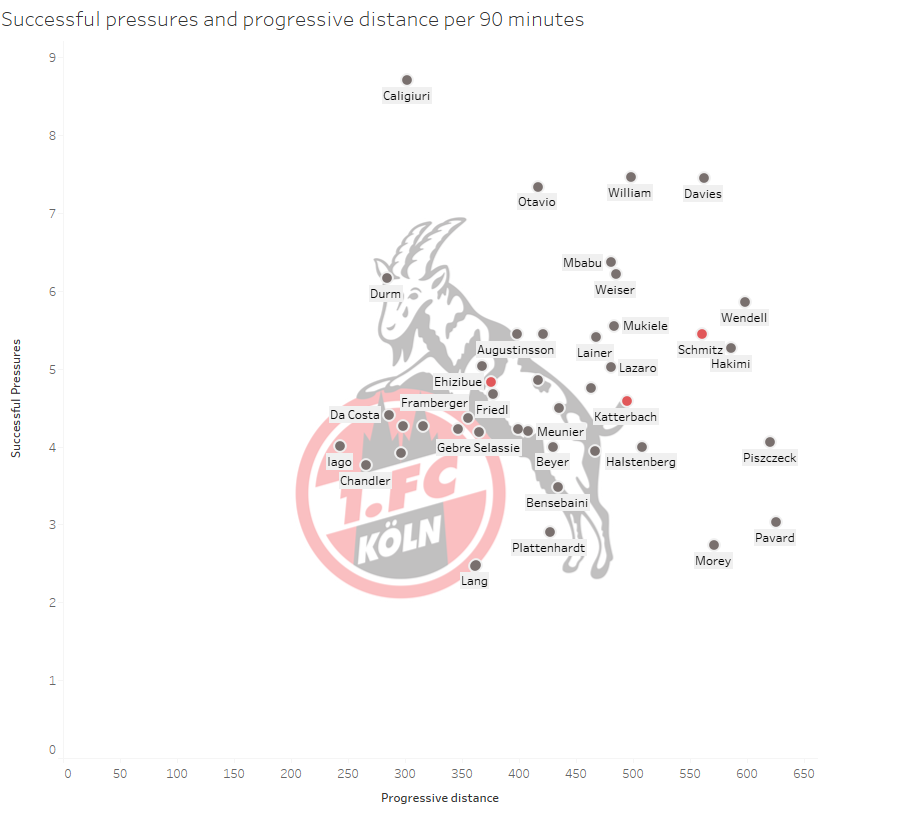 In central midfield, Cologne might have their biggest qualities with experienced players like former German international player Jonas Hector (30), Marco Höger (30), and Ellyes Shkiri (25). As captain of the team, Hector will be set next season again. Especially Shkiri is providing good statistics in terms of pass completion and interceptions per 90 minutes. That is why he is the favourite of getting the spot next to Hector in Cologne´s starting eleven. Adding to that, the promising talents Elvis Rexhbecaj (22, returns from loan at VFL Wolfsburg) and Salih Özcan (22, returns from loan at Holstein Kiel) are solid back-up options. 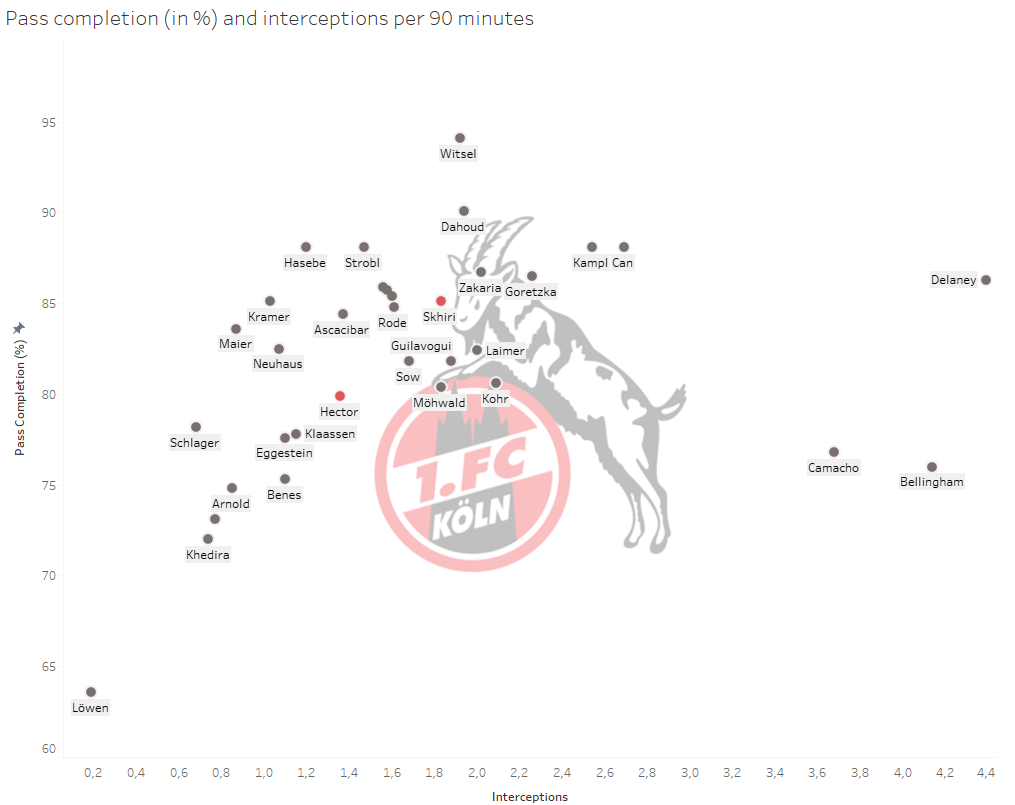 In central offensive midfield, Cologne only have 2 players in their current squad: Dominick Drexler (30) and Jens Castrop (17). Louis Schaub (25) returned from his loan at Hamburger SV but is likely to leave the club before the start of the new season. Many hopes rest on Drexler as he contributed 7 goals in 27 matches last season. Taking a look at his statistics, it is obvious that he keeps up with two of the best offensive midfielders (Julian Brandt and Marco Reus from Borussia Dortmund). 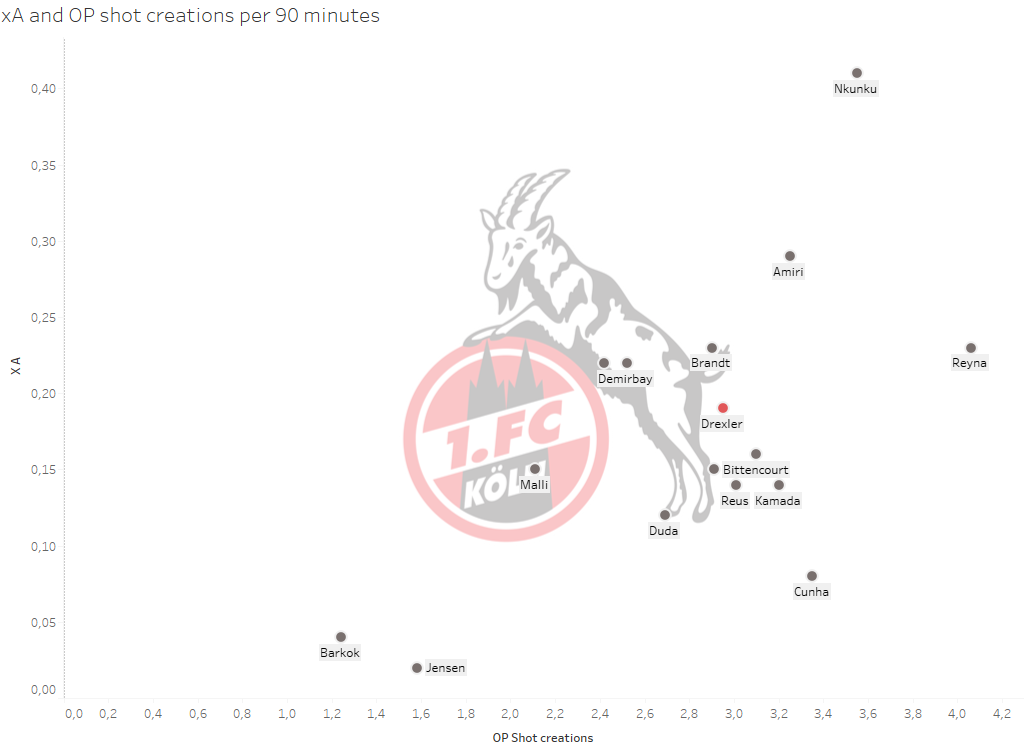 On the wings, Cologne have outstanding talents in their own ranks. While Jan Thielmann (18), Tim Lemperle (18), and Marvin Obuz (18) are their options for the right-wing, Ismail Jakobs (21) and Florian Kainz (27) provide high Bundesliga quality on the left-wing. Even if Jakobs can improve his output in terms of goals (2) and assists (2), he is one for the future. Kainz has more experience and therefore, scored 5 goals and assisted 7 more goals that were vital for Cologne last season. He might be one of the most underrated players in the Bundesliga. 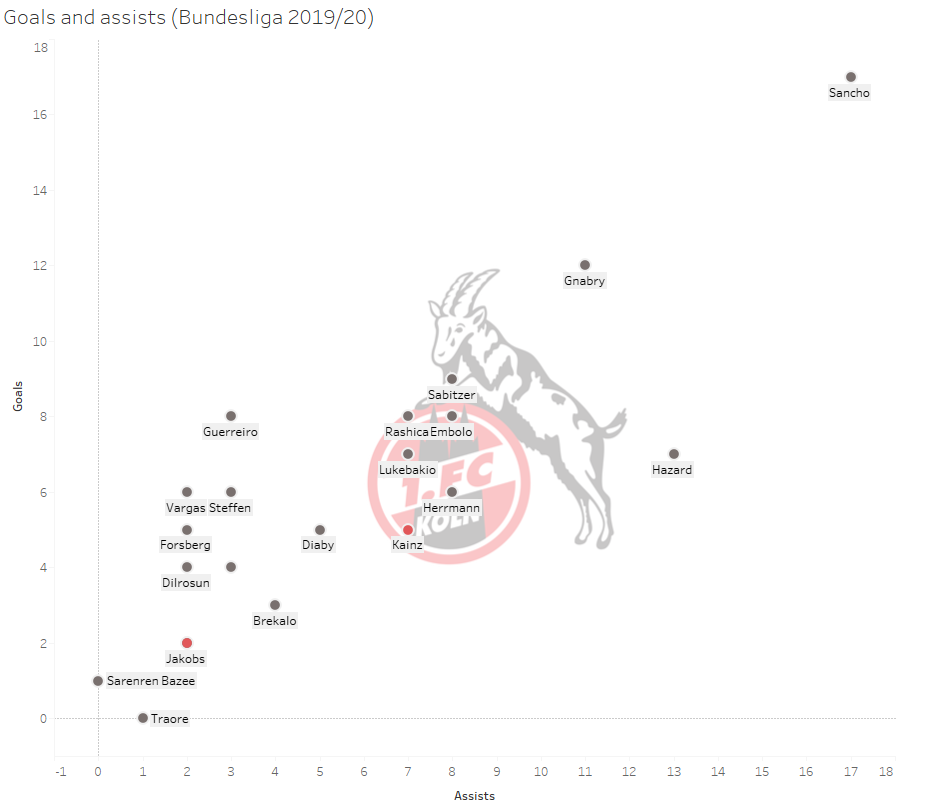 In the forward position, Cologne might have their biggest problem. Not only that they have only 2 nominal strikers in their team, the also lost the most important player (Mark Uth, returns to Schalke 04 after loan). Jhon Córdoba (27) is a good striker with an almost 20% conversion rate (a similar rate to Robert Lewandowski from FC Bayern). However, if he gets injured, only 32-years old Anthony Modeste can replace the Colombian. 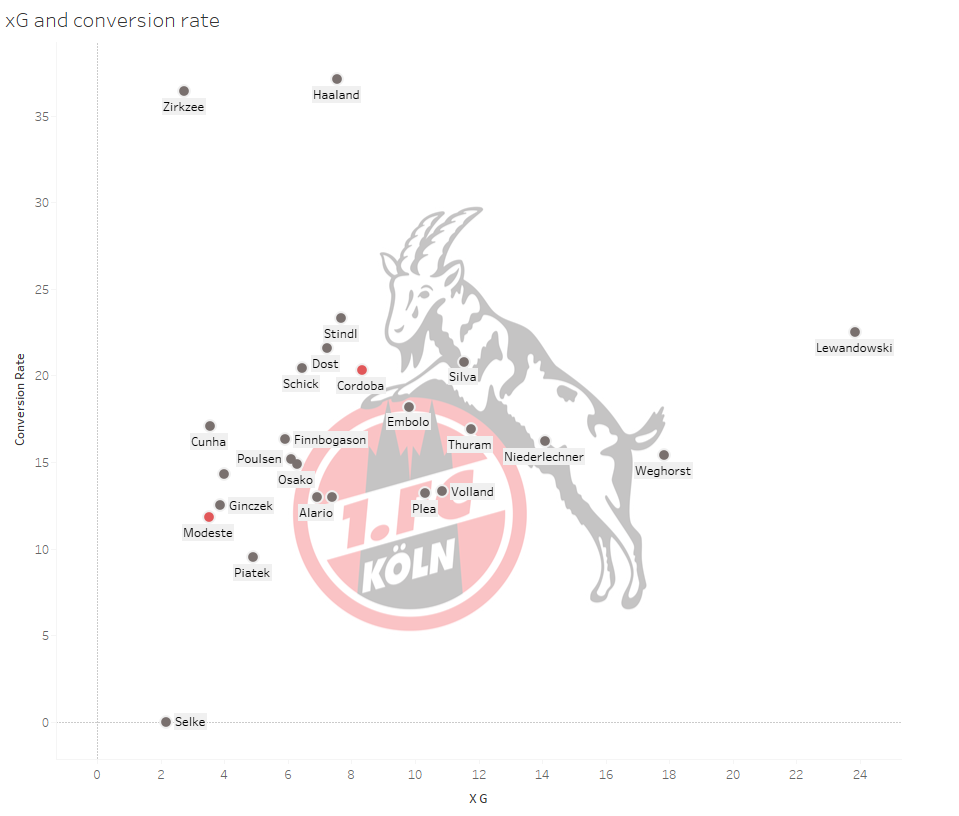 Last season, Gisdol lined up his team in a 4-2-3-1 formation with Drexler on the wing and Uth as number 10. After the departure of Uth, Drexler might play in central offensive midfield. Hector and Shkiri will build an exceptionally good pairing in central defensive midfield again. With Robin Hack, Cologne tries to get a very flexible and young player for their offence who is likely to get the starting place on the right-wing. On the left-wing, Kainz will lead the race but with Jakobs, Gisdol has an excellent second option. Córdoba will be their striker if they can´t get a new one before the new season starts. 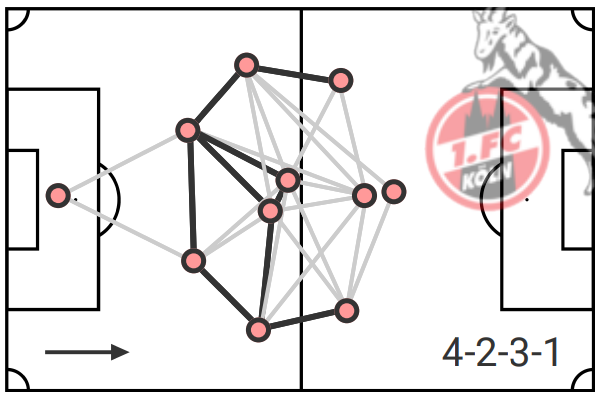 Hector, Shkiri, Kainz, Katterbach: These are names of quite good Bundesliga players. Cologne definitely have quality and do not seem like a club that played in the second division two seasons ago. However, their squad width is not of a good standard and might be a disadvantage at the end of the season. Nevertheless, thanks to their quality they have a good chance to stay in the league.