RB Salzburg are a football club renowned for their ability to poach young talent from around the world and turn them into superstar calibre players; names like Liverpool’s Sadio Mane and Borussia Dortmund’s Erling Haaland come to mind. When looking at the current group of attackers linked with a move away this summer, the two names that come to mind right away are Karim Adeyemi and Brendan Aaronson. One lesser-known name to many that has also been linked with a move away this summer is 21-year old Swiss attacker Noah Okafor.

This tactical analysis and scout report will look at some of the strengths developing in Okafor’s game, and this analysis will also show why many clubs in Europe have interest in the young Swiss star. 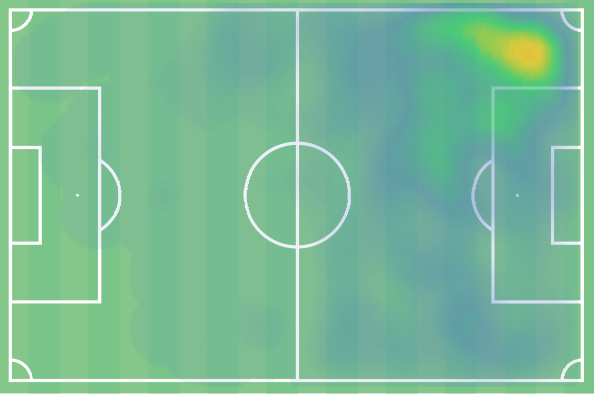 For the vast majority of this season, Mattias Jaissle has been setting Salzburg up tactically in either a 4-3-1-2 formation or a 4-4-2 diamond. Okafor is Jaissle’s preferred partner to top scorer Karim Adeyemi up top, with Okafor normally starting to the right side. However, as his heat map from this season shows, he has a tendency to start to drift to a more wide left position. While it allows Okafor more space in a wider position, it also benefits the tactics of Jaissle, with this space in the centre of Adeyemi and Okafor usually being occupied by Aaronson. This gives Salzburg a numerical advantage against the two opposition centre backs when it comes to different pressing sequences when the opposition is attempting to build out from the back.

When analysing Okafor’s skill set, one of the first things that becomes evident is his dribbling, especially in 1v1 situations. This is also why his tendency to drift wide as the match progresses benefits his style of play. In the central areas, it is harder for Okafor to be able to take players on 1v1, whereas in a wider position, he is normally isolated on his own against the opposition fullback. This dribbling ability is further illustrated by Okafor’s 6.6 dribbles attempted per 90, with a 52.5% success rate. The phase of play above shows the type of simple dribbling and movement on the ball that Okafor is capable of to create goal scoring chances for his teammates. In the match against Rapid Wien, Okafor has drifted out to the left side and is isolated 1v1 against the Rapid full back. Okafor shows the full back the inside to get him off balance, before using a burst of acceleration to drive past him on the outside, getting towards the byline. At the same time, Aaronson is making an unmarked run past the Rapid Wien defence, which Okafor notices, and plays a perfect ground cross for Aaronson to shoot past the ‘keeper first time. Though not all of Okafor’s dribbling sequences are complex, they still are very effective. 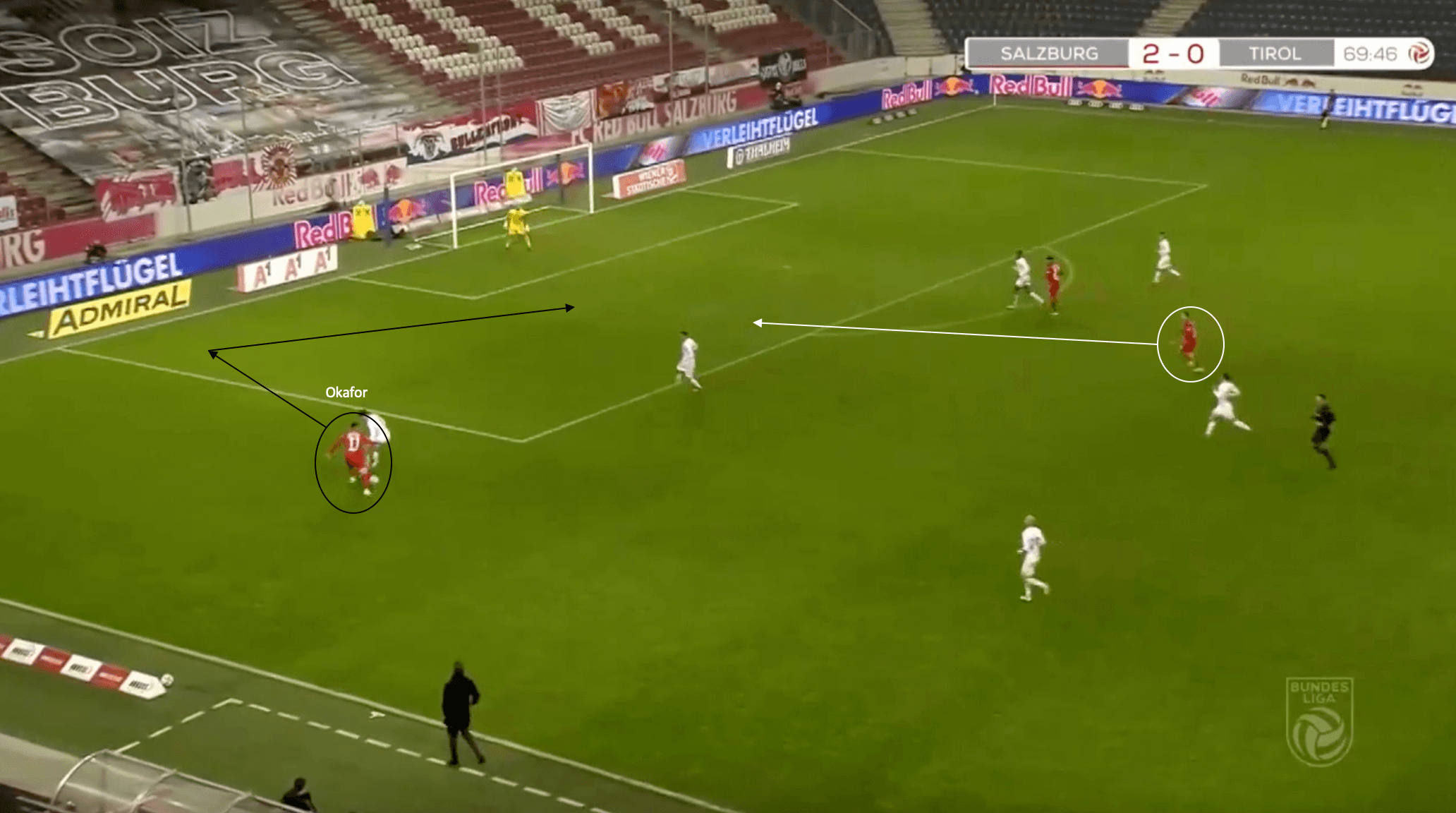 The phase of play above from Salzburg’s match against Tirol shows this exact dribbling sequence in action again from Okafor. He has once again drifted wide left, leaving the space between himself and Adeyemi for Aaronson to run into. Okafor once again is isolated 1v1 against the full back. He shows him the inside to get him off balance before using a burst of acceleration to get by him and to the byline. Unfortunately, the ground cross for Aaronson isn’t the best, allowing the Tirol defenders to intercept and clear. 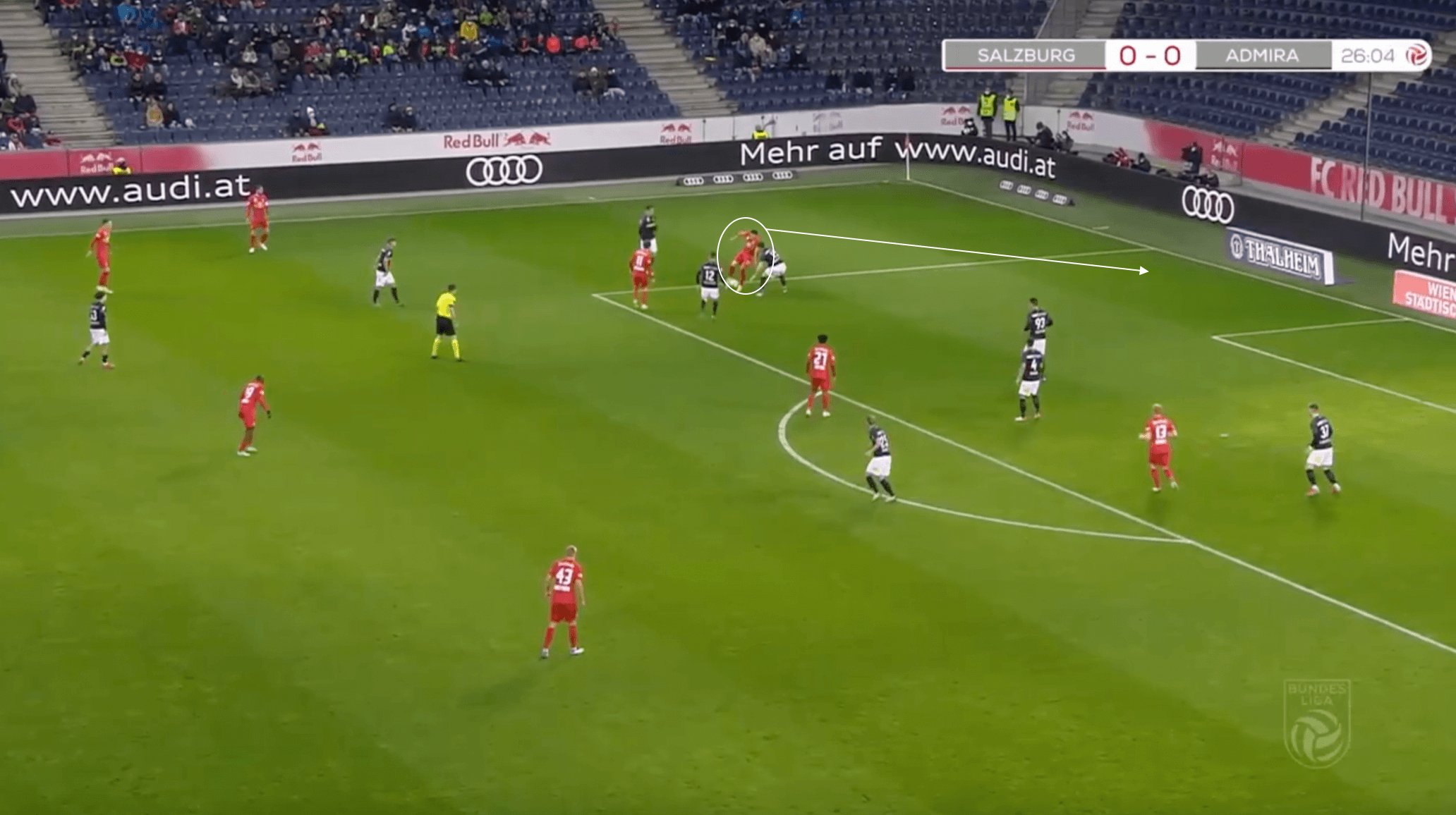 The phase of play above against Admira shows the capability that Okafor has of beating players when his back is turned to them. Okafor has received possession with his back to goal and is holding up play well as he is pressed from behind by the opposition defender. Instead of just passing back to a teammate, Okafor decides to back heel the ball behind the defender before turning past him onto the flicked ball. The defender is able to recover and flick the ball away for a Salzburg corner; with Okafor creating a set piece opportunity from nothing due to his dribbling ability with his back to goal. 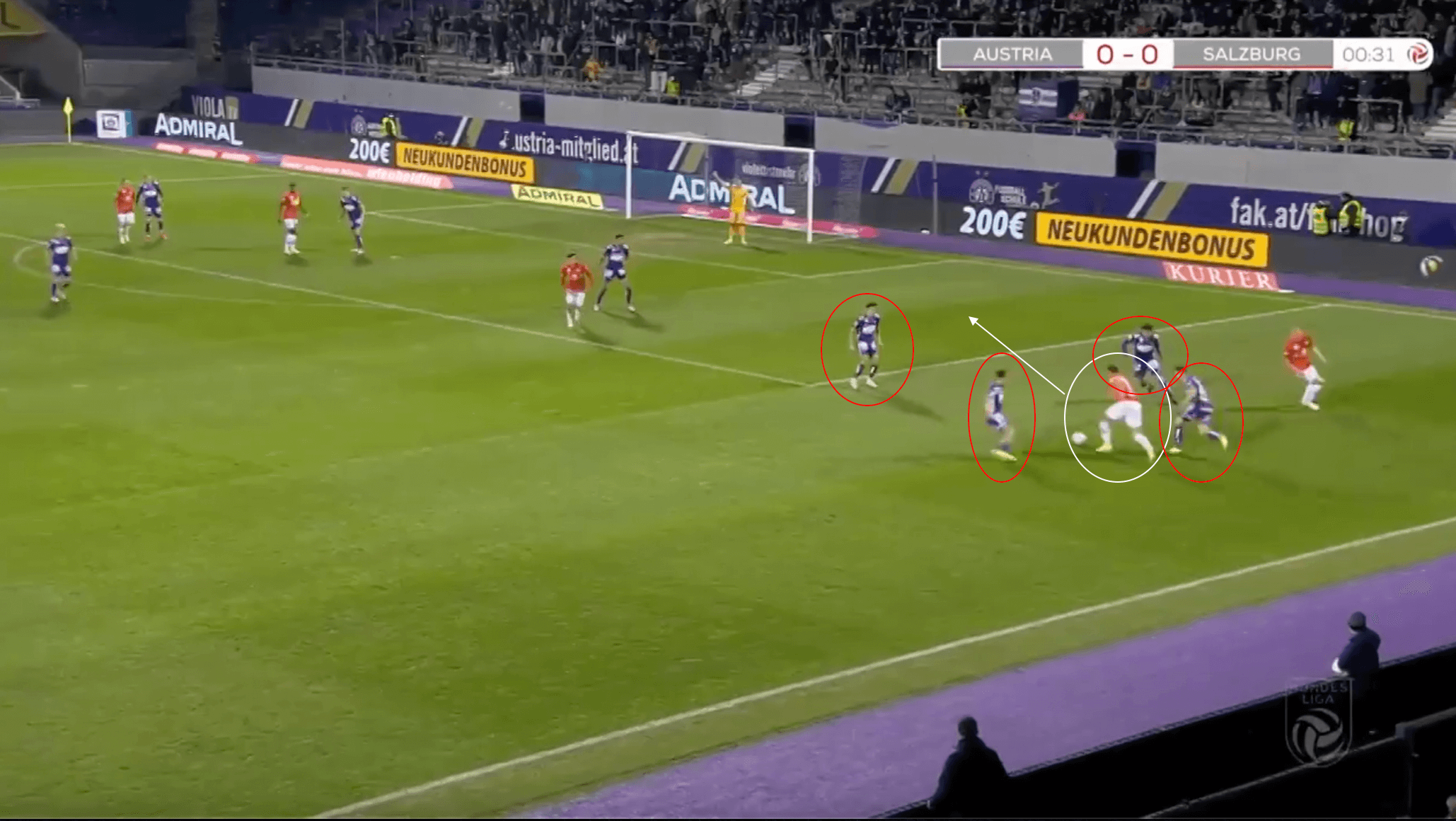 Another aspect of his dribbling that Noah Okafor excels at is his ability to glide through multiple defenders with the ball staying at his feet. In this phase of play above against Austria Wien, Okafor is able to use his close control and dribbling ability to glide past four Wien defenders, before playing a one-two with his teammate on the edge of the box. Unfortunately, his teammate does not play the best pass back into his path, with the defender able to intercept it. With Okafor being 6’1” tall, this is no easy feat, but he makes it look easy to glide through the four defenders with ease.

Noah Okafor’s dribbling is definitely a strong suit in his game, but is not the only thing that he has been able to refine and improve since moving to Austria from Swiss side FC Basel a few seasons ago.

Intelligent off the ball movements

Another thing that Okafor does well is his intelligent movements off the ball in and around the penalty box. So far this season across all competitions Okafor has 12 goals and 6 assists in 27 appearances, with a lot of these goal involvements coming down to his intelligent off the ball runs in behind the opposition’s defence. 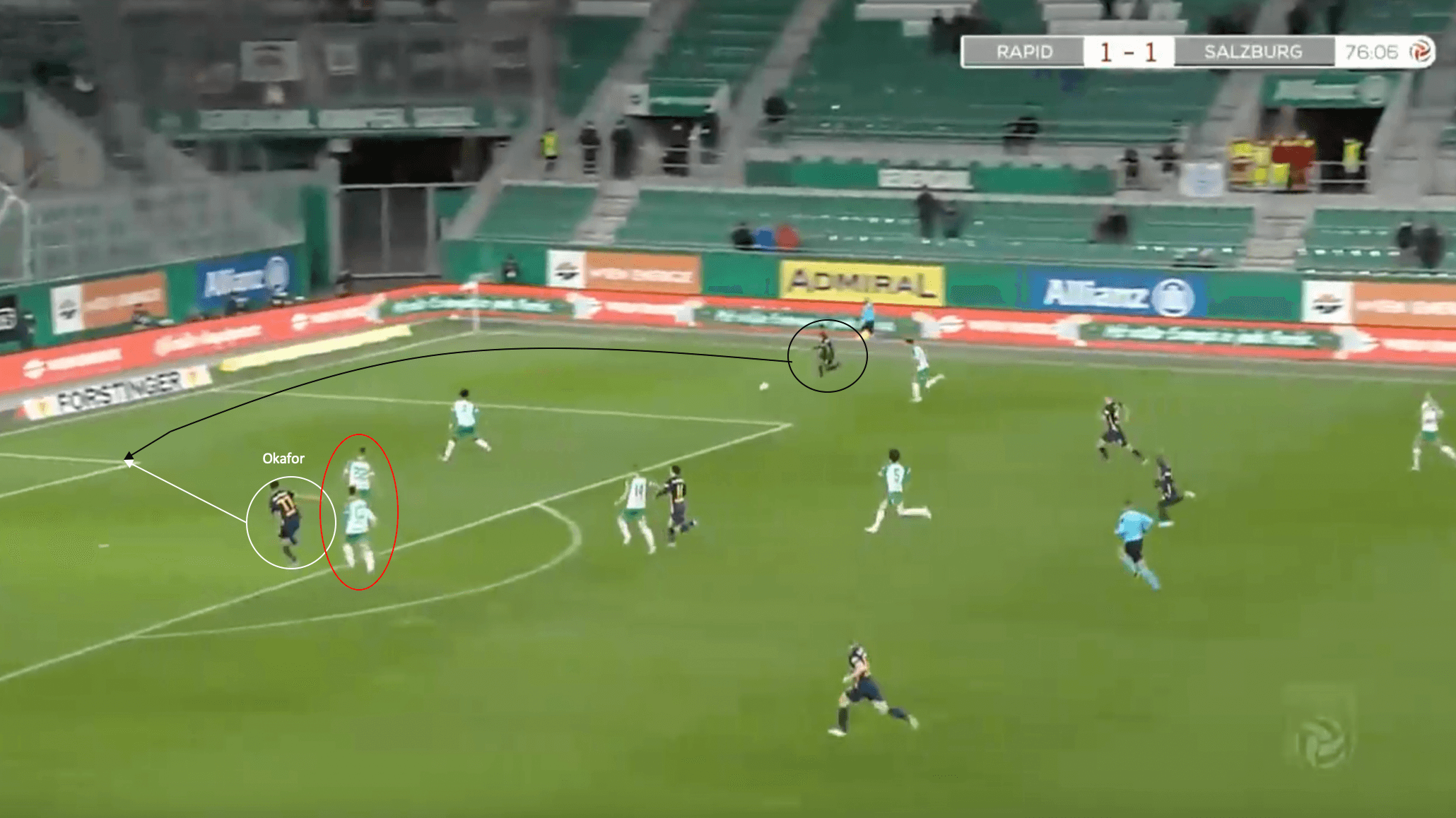 The phase of play above shows an example of this intelligent movement off the ball from Okafor. Adeyemi has drifted into a wide right position to receive possession, which allows Okafor to operate in a more central position during this attacking sequence. The two defenders above, circled in red, are caught ball watching, allowing Okafor the space to make a run in behind them. As a result, Adeyemi plays a perfect cross into Okafor’s path, which he is able to shoot past the goalkeeper to give Salzburg the lead. 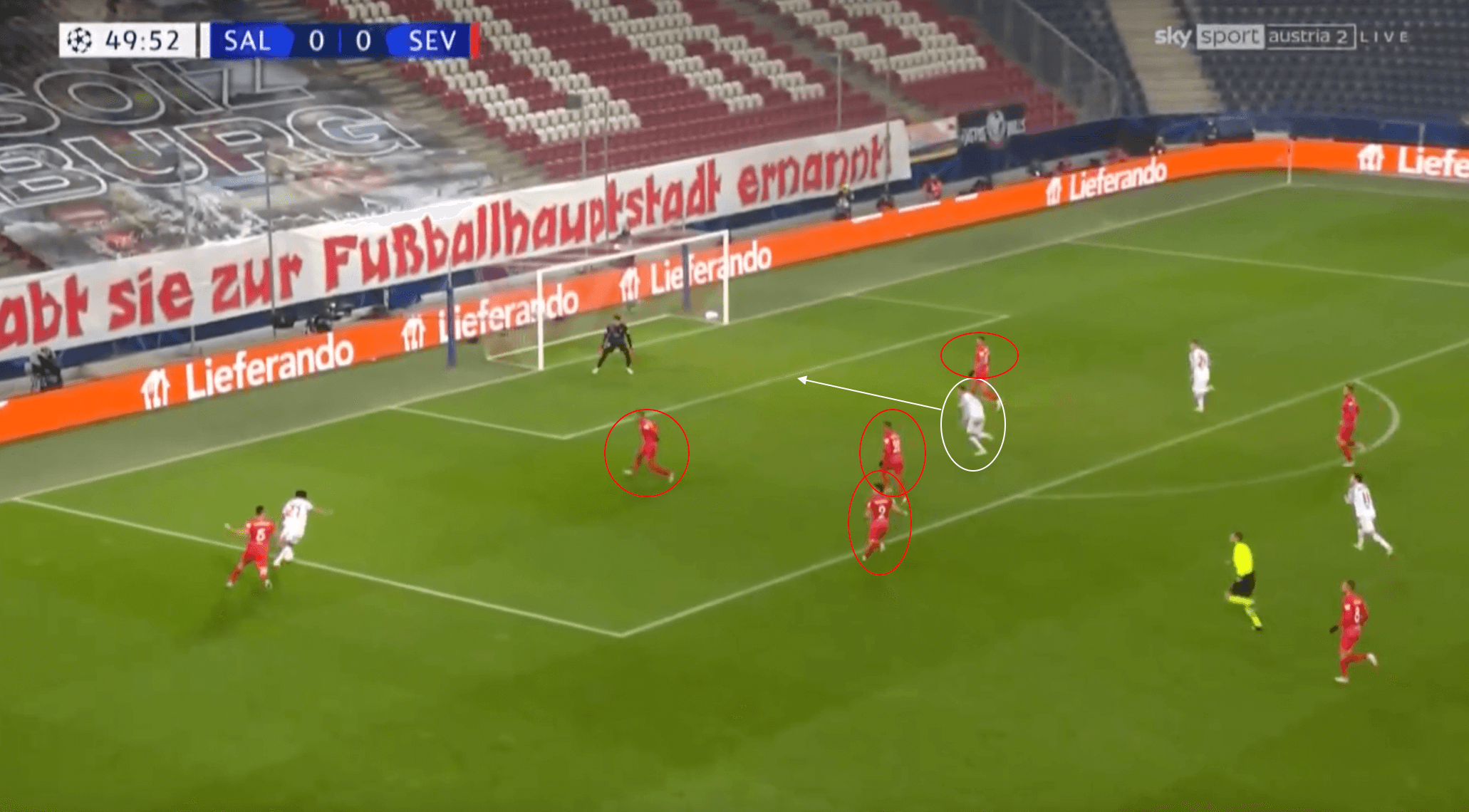 It is not just in the Austrian Bundesliga that Okafor is able to excel with his intelligent off the ball movements. In the Champions League against Sevilla this season, Okafor scored one of his best goals this season as a result of this movement. At the beginning of this attacking phase, Okafor is in possession and passes the ball off to Adeyemi on the left when he reaches the edge of the 18-yard box. Okafor is then able to make an unmarked run past four Sevilla defenders as a result of them ball watching, with none of them picking up his run. As a result, Adeyemi is able to play a great ball across goal for Okafor to score first time past Bono in the Sevilla net. 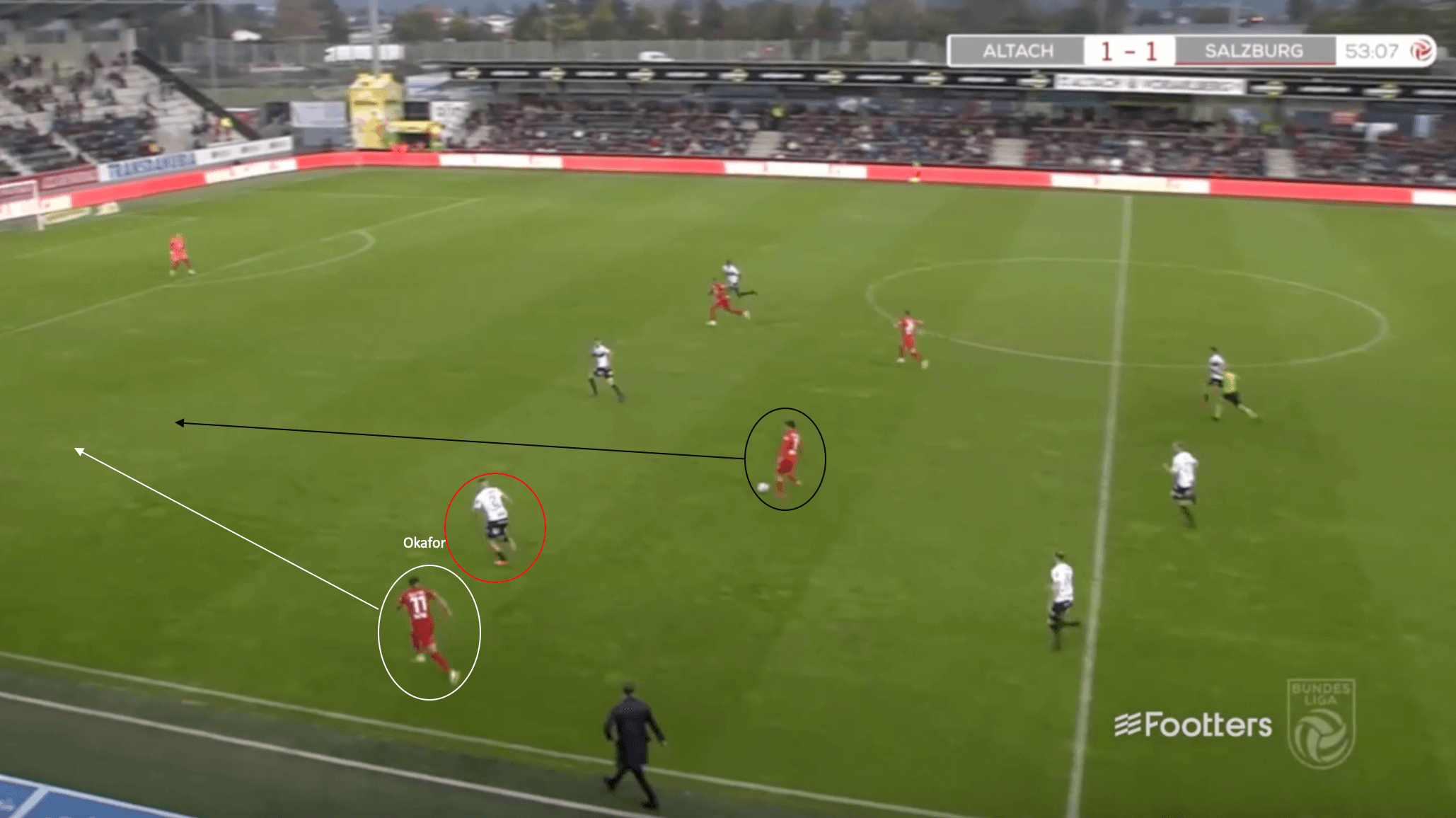 The phase of play above against Altach shows another example of this off the ball movement. In this attacking sequence, Okafor starts from the halfway line after playing a pass inside towards Aaronson. The opposition full back is then caught in between, not knowing whether to try and pressure Aaronson, or mark the inevitable run of Okafor. Okafor is able to notice the defender having this dilemma and makes the great run in behind onto the ball played by Aaronson. He is able to run onto the pass and take a couple of touches before playing his favourite pass back inside towards the run of Aaronson. Unfortunately, Aaronson’s ensuing shot goes over the bar, but this attacking phase once again showed the danger Okafor becomes when he is allowed the time and space to make these intelligent runs in behind the opposition defence.

When you think of the tactics that Matthias Jaissle employs at Salzburg, very much like his predecessors, pressing from the front is key to success. This is something that Noah Okafor excels at, with him attempting 2.03 recoveries per 90. More crucially, 87.1% of these recoveries have occurred in the opposition’s half of the field, indicating the high press that this Salzburg team consistently demonstrates; with Okafor being one of the keys to this pressing machine. 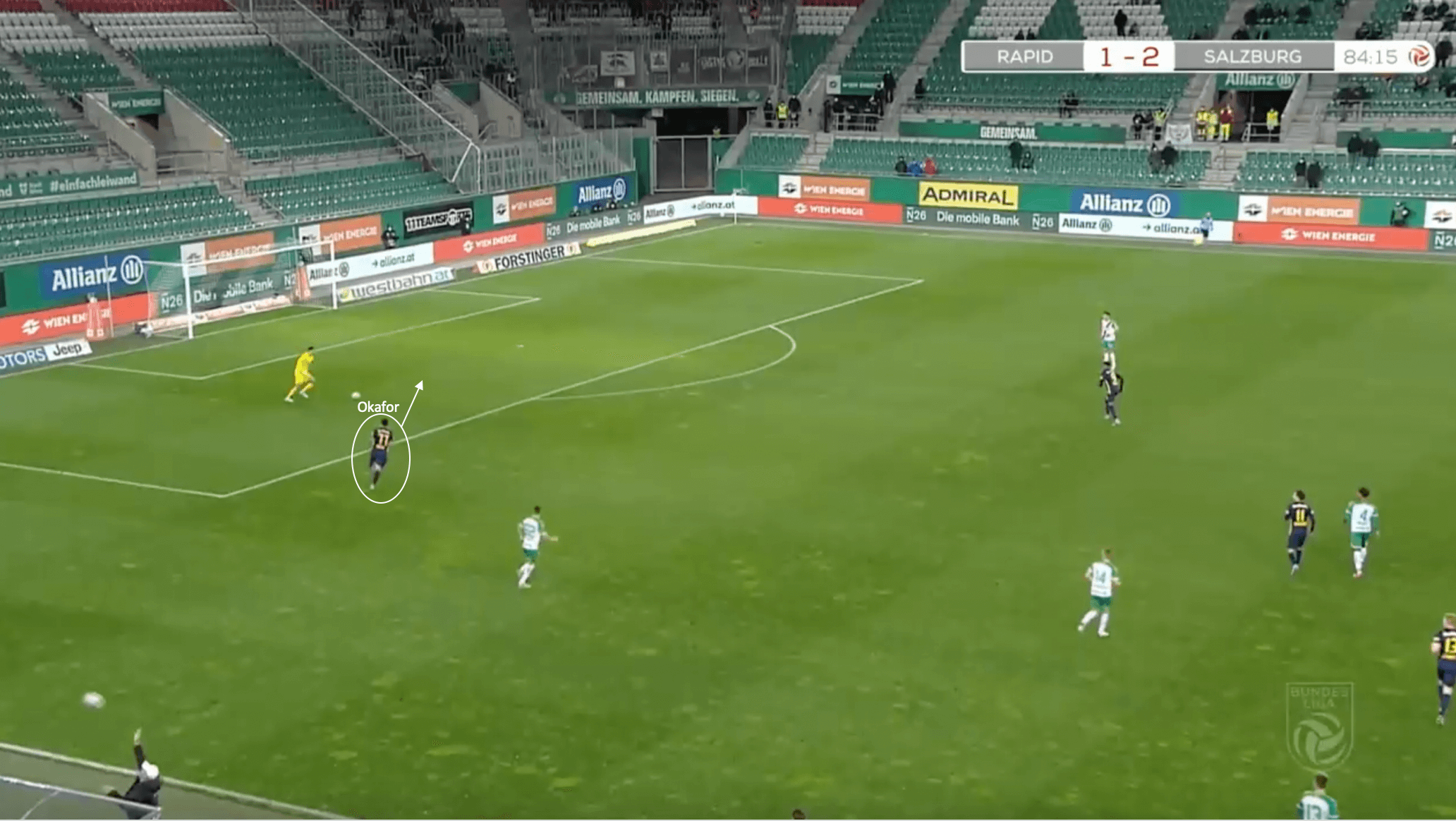 The phase of play above shows a good example of this high press that Okafor is constantly participating in. In this pressing sequence, Okafor is the furthest man forward after pressing the opposition fullback on the near touchline. The fullback passes the ball back to his goalkeeper, with Okafor continuing on the pursuit. The ‘keeper takes a heavy touch, which Okafor notices and attempts to take advantage of. Luckily for the ‘keeper, he is able to clear the ball, but because of the high intensity press from Okafor, the ball is cleared right to a Salzburg player. 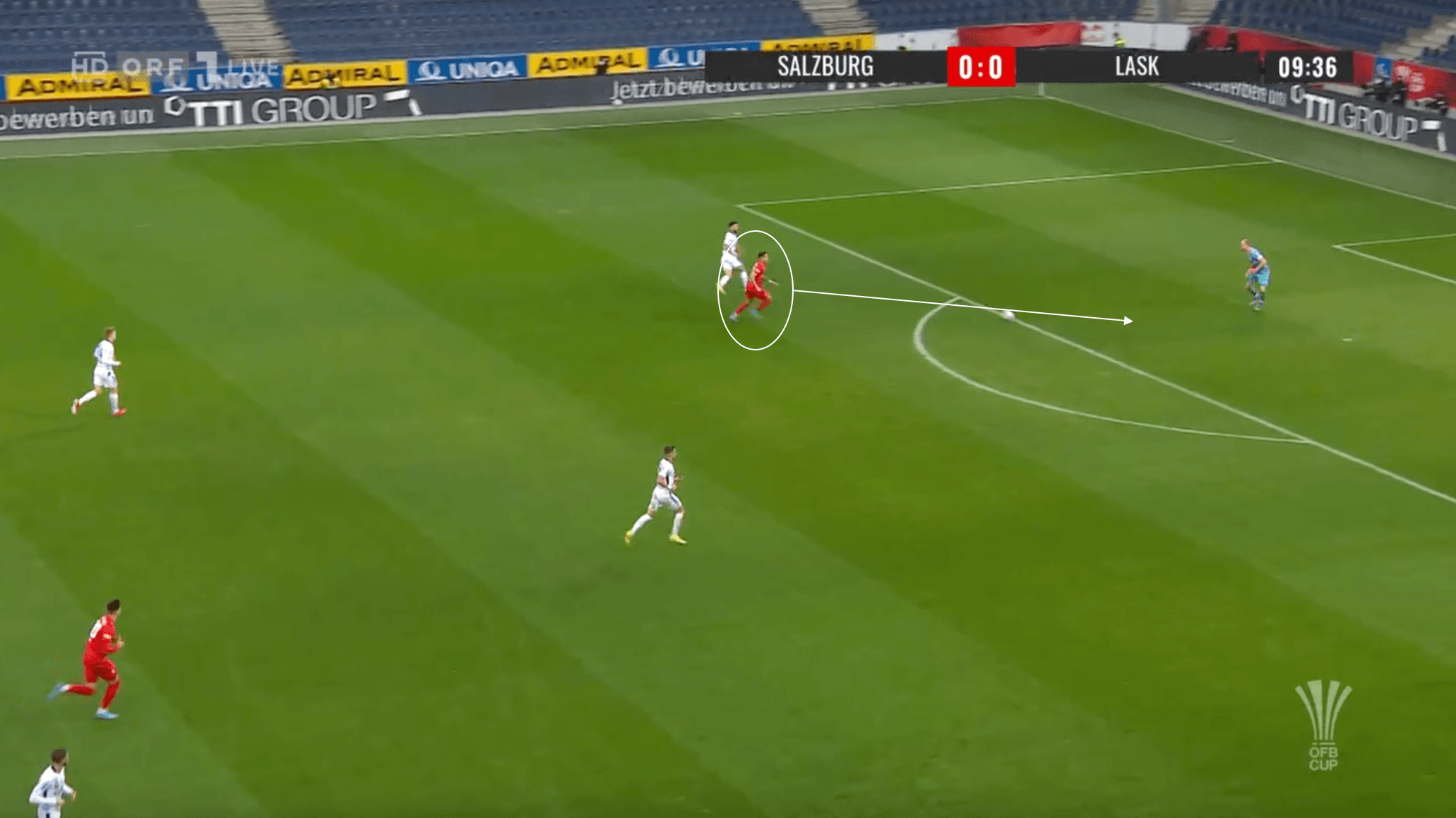 The phase of play above once again shows the high pressing machine that Noah Okafor is. Once again, he is the furthest man forward to press the goalkeeper. This pressing sequence started in the middle third of the pitch; with Okafor forcing the deepest midfielder to play the ball back to the centre back, before going to the goalkeeper. Okafor presses all three, which ends with the goalkeeper kicking the ball straight to a Salzburg player after the pressure put on by Okafor. 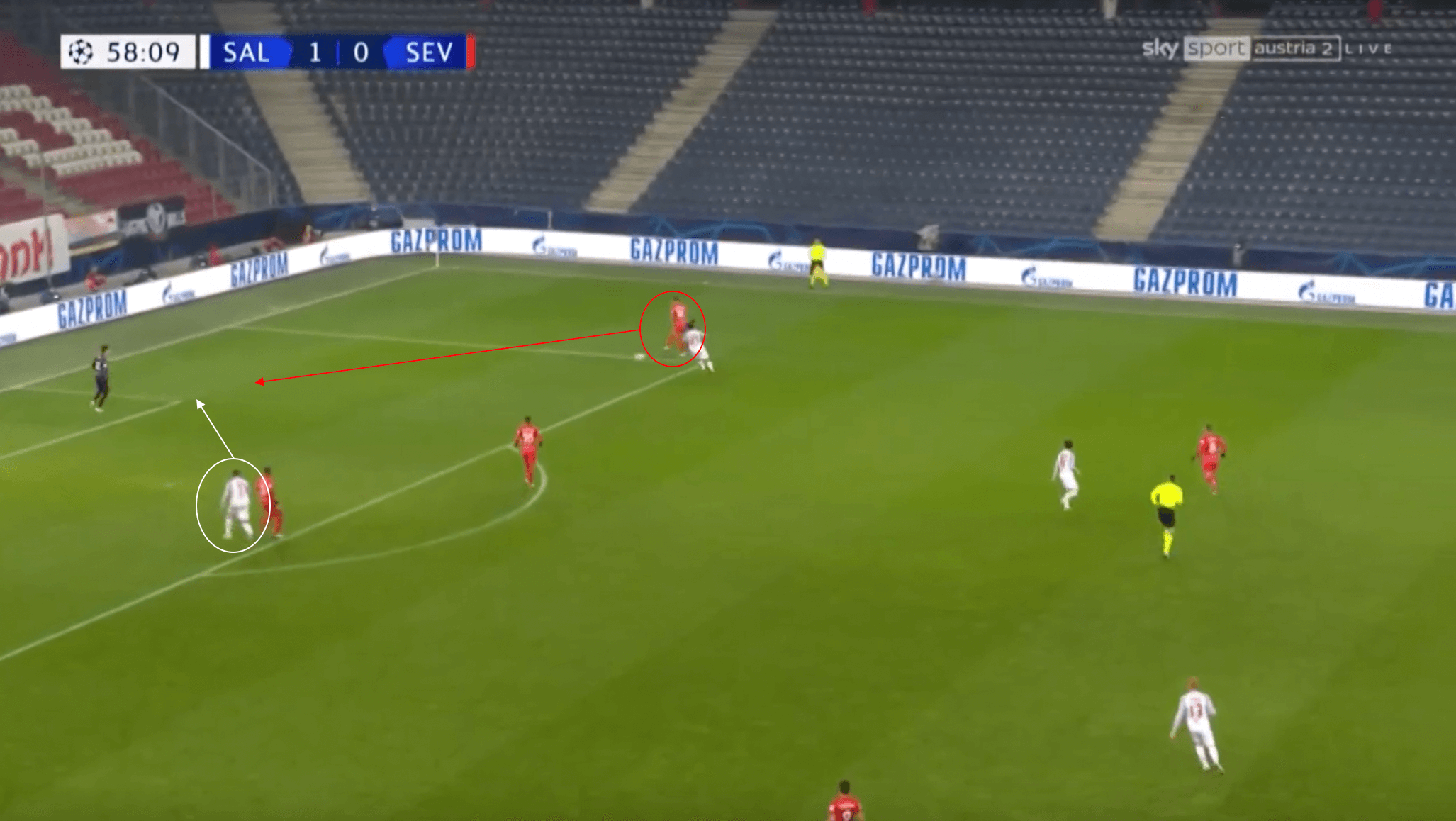 The phase of play above shows how Okafor thrives in team pressing as well, as opposed to only individual pressing sequences. In this pressing sequence, Adeyemi is pressing the Sevilla defender in possession, forcing him to play a pass back to the goalkeeper. Okafor anticipates Adeyemi forcing this type of pass, and starts to engage the goalkeeper. While Okafor does not get to the ball before the ‘keeper, he is able to force him into a poor clearance. Noah Okafor is not just a player who is technical on the ball and with good vision to pick out teammates and making good off the ball runs; he also excels in his off the ball work, with this being clear in his pressing capabilities.

This analysis and scout report has shown exactly the type of talent that Noah Okafor is, and he is still not the finished article. It is understandable why clubs may still be wary if Okafor’s strengths can translate to a bigger and more physical league, but the talent is undeniably there. With rumors of a move to either the Premier League or the Bundesliga on the horizon, the sky’s the limit for Okafor, who like his attacking partners Karim Adeyemi and Brendan Aaronson, is destined to shine in the big time.