Jesse Marsch at Leeds United 21/22: What the Premier League can expect from the new manager – tactical analysis

Jesse Marsch has taken over from Marcelo Bielsa as Head Coach of Leeds United.

The American coach comes with a reputation of being a key component within the rise of the Red Bull network. He has managed New York Red Bull, Red Bull Salzburg and most recently the groups number one club RB Leipzig.

His tactics and philosophy have been greatly influenced by the tactics that Red Bull have implemented throughout their network. As Marcelo Bielsa shares some of those ideologies, Marsch should be viewed as the ideal candidate for Leeds United to help build on the footballing philosophy that Marcelo Bielsa has already put in place.

Many people regard the appointment of Jesse Marsch as Leeds United Head Coach as a risk. However, the reality of the situation is that the risk comes from the club’s league position and the timing of his appointment. Not because of his ability to lead the team.

This article provides a tactical analysis of how Leeds United will look to play under Jesse Marsch. We will analyse the tactics and the key principles of his philosophy and show Leeds United what they can expect as he looks to implement his ideas and keep the club in the Premier League.

A fundamental part of Jesse Marsch’s tactics is how he instructs his teams to press. The pressing structure he implements comes directly from the counter-pressing style that Ralf Rangnick has implemented across Red Bulls football clubs.

Marsch likes his teams to press with a high intensity, press high up the field and press in numbers. Marsch sees his pressing as an attacking method, often stating his teams don’t press to win to regain possession, they press to score goals.

Jesse Marsch often prefers his teams to press in a 4-2-2-2 shape, although this pressing shape featured more throughout his time at Red Bull Salzburg than RB Leipzig. He prefers the two attacking midfielders to remain as the extra line of attackers and not drop back into midfield. He likes his teams to engage the opposition in their own half with four players.

Jesse Marsch prefers the attacking midfielders to remain as central as possible. This invites the opposition to build up on the outside. When this happens both Salzburg and Leipzig when managed by Marsch, encouraged as many players as possible to attack the ball and counter-press, therefore creating a defensive overload.

Jesse Marsch’s variant of counter-pressing focuses on ball orientation. He places a high importance on attacking the ball quickly. It doesn’t matter where the ball is located or what player holds possession of the ball.

He doesn’t like his players to stop before they get to the ball. He instructs his players to go through and attack the ball as he believes it’s important for the players to have the mentality and aim of winning the ball and not protecting the space vacated.

Timing and Positioning of the Press

There are certain concepts that he looks to apply to his team’s pressing style that differ from that of other teams that like who look to counter-press. At Red Bull Salzburg and RB Leipzig, he believed the timing and of when his teams press and the positioning of his own players during the press to be more important than setting common pressing triggers such as when the opposition play the ball into a certain area of the pitch, or when a certain player from the opposition receives the ball.

The concept of timing during the press is the most important. Jesse Marsch wants his players to start to press when the man in possession releases his pass and not when the next man in possession receives the ball. This means the ball receiver is under pressure before the ball arrives, limiting his time on the ball. As you can see in this example here.

Equally, it’s also important that the players who engage the opposition in the press don’t time their press to early.

This would create unnecessary running for the players who have a lot of physical demands expected of them anyway and it would also create bigger spaces between the players. This would then affect the team’s defensive block and make the team easier to play through. The opposition could look to take advantage of players anticipating the press to early by making blind passes.

Jesse Marsh wants his players to be positioned correctly when they press. This a key part of controlling the space when they don’t have the ball. The players are required to be positioned so they only run half the distance to what the pass distance is. This puts them in position to press earlier and increase the chances of winning the ball back.

Cutting off the Passing Lanes

Marsch likes multiple players to be attacking the ball at once. As soon as one man presses the ball the whole team looks to attack the space in front. Whilst the team are pressing, he wants players to be close to the ball. He doesn’t want his players to worry about cutting the opposition passing lanes off.

Marsch believes that if his players follow his ideology of attacking the ball thoroughly during the press, then the closer they get to the ball the smaller the passing lane becomes anyway. This is the concept of the cover shadow.

This limits the passing options for the man in possession of the ball and can also make the next pass predictable. This then allows the other players to be able to prepare their timing and position distance so they can look to press immediately or intercept before that pass arrives.

Looking at this image above of when Jesse Marsch oversaw Red Bull Salzburg.

TSV Hartberg have played out from the goalkeeper to the left-sided centre back. Sekou Kiota has timed his press and is attacking the ball aggressively. As he gets closer to the ball carrier, he cuts of the passing lane leading to the TSV Hartberg midfielder in the penalty area.

Noah Okafor and Patson Daka have positioned themselves in an area that allows them to press two of TSV Hartberg players. With the distance to each one being half of what the passing length would be.

Once his teams have won possession Jesse Marsch wants his teams to transition from defence to attack immediately. The target during transition is to have an attempt on goal within 10 seconds of winning the ball. This is a tactical principle that is used throughout the Red Bull network

To achieve quick transition, he instructs his teams to play the ball forwards quickly with a huge emphasis on verticality and high energy. When they win the ball, they must have options in the attacking third of the pitch.

In this transition, RB Leipzig win the ball in midfield and within three passes they are in FC Koln’s penalty area. The fourth pass results in an attempt on goal which they should score. It takes the team six seconds to get their shot on goal. 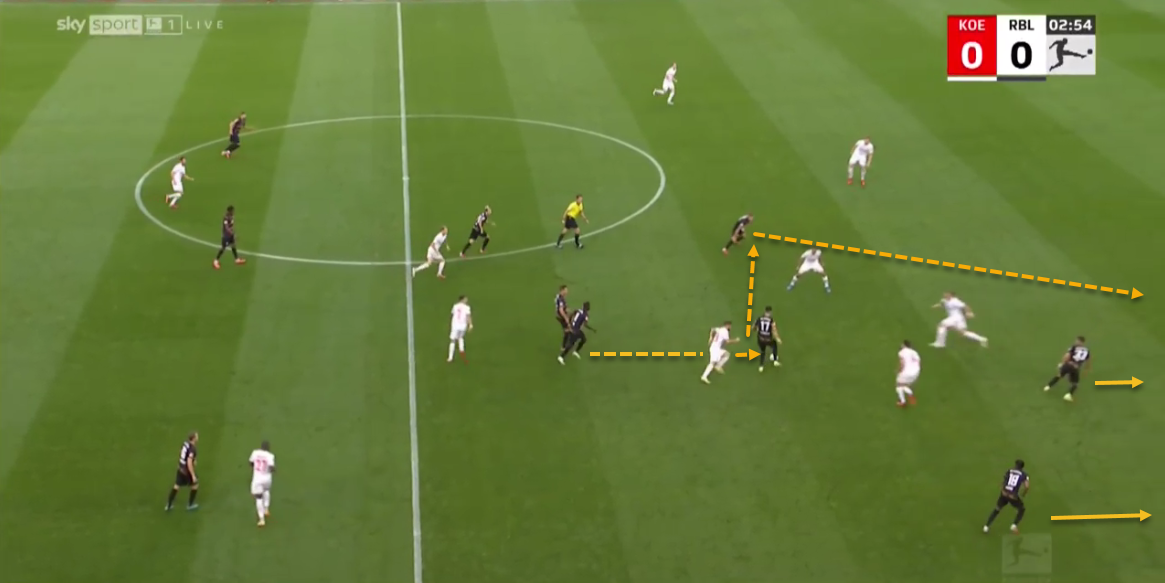 As mentioned throughout this analysis Jesse Marsch places a high importance on his team attacking with verticality. Jesse Marsch doesn’t like any of his team’s holding possession for possession’s sake. He doesn’t place any importance on his teams having a high percentage of possession at the end of each game.  It is not considered an important aspect of his attacking approach. He wants his teams to play with a purpose.

Marsch’s teams tend to attack through the centre of the pitch with a narrow structure. He likes his players to surround the ball, but the passing lanes must remain long enough to unbalance the opposition and create space.

He likes his teams to find ways to get to the opposition’s goal as much as the team possibly can. They will attack in numbers, looking to overload the opposition penalty area on every opportunity. Both Red Bull Salzburg and RB Leipzig would have up to four players between the opponent’s defensive and midfield lines.

The forward-thinking tactics that Jesse Marsch looks to implement don’t just apply to the attacking third of the pitch. It starts from the goalkeeper and the centre backs during the build-up. The shape of the team is structured in a way that invites vertical football. 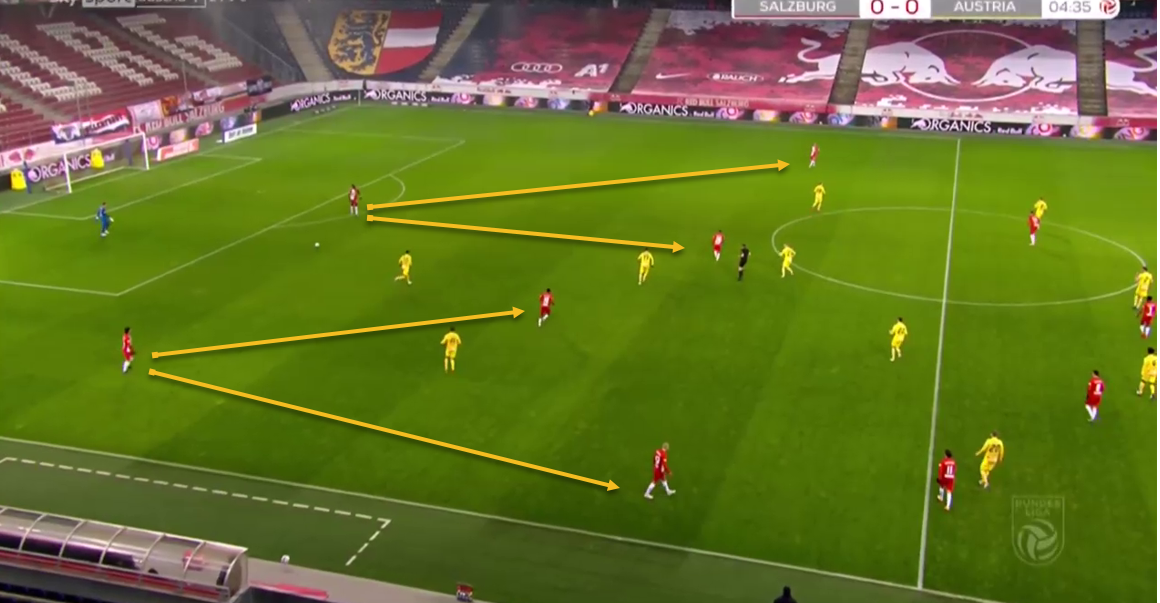 The next sequence of analysis shows examples of how Jesse Marsch likes his teams to overload the penalty area. The teams are attacking with a narrow structure, with the widest player being in the half-space.

The ball carriers have at least two options available for the next pass. 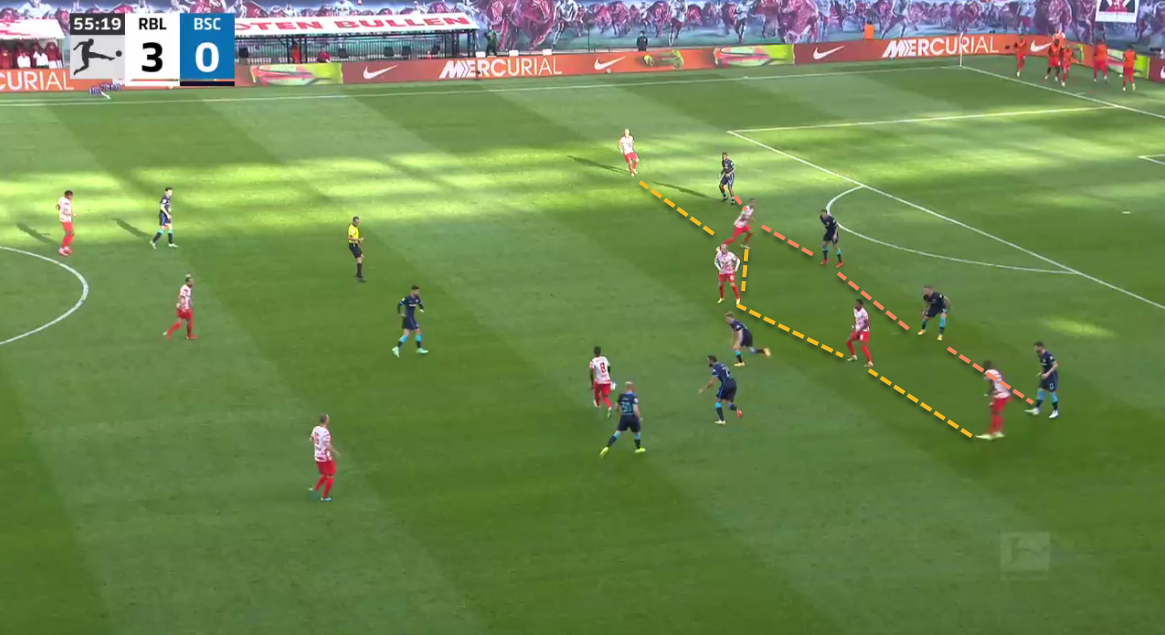 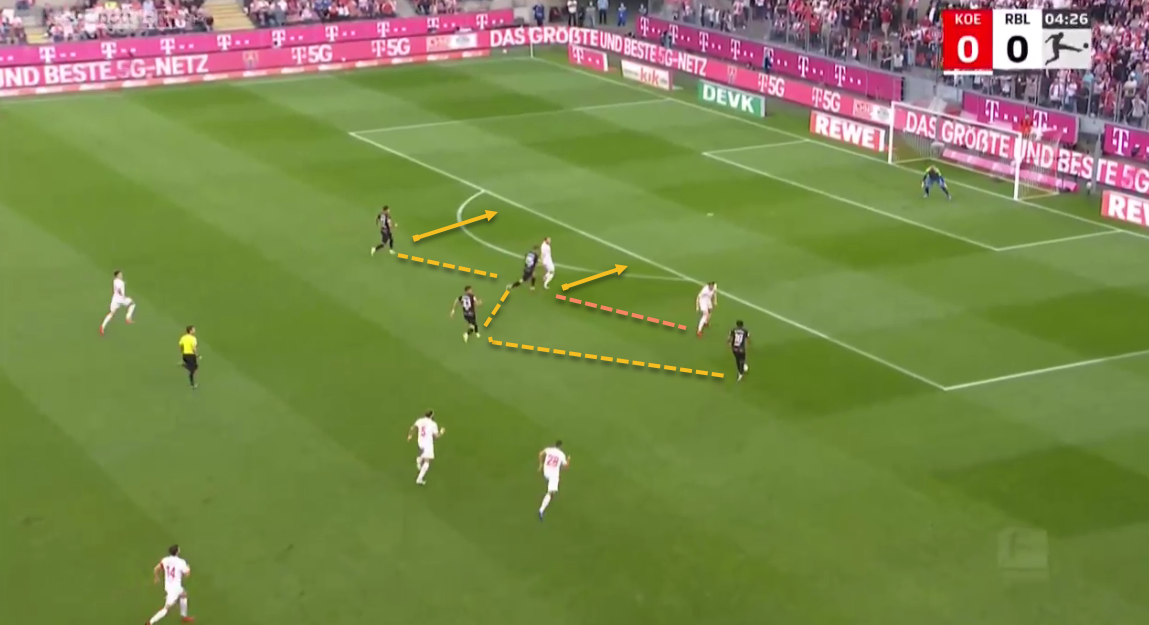 A common attacking trait throughout Jesse Marsch’s career is for teams to attack the box with low flat crosses behind the defence of the opposition. The crosses are preferably aimed at the near post. This benefits his insistence on having multiple players attacking the penalty area during the attacking phase. The benefit of low crossing behind the defence are:

Saturday’s match against Leicester City offered the Leeds United fans the first chance of seeing a Jesse Marsch team up close.  The one-nil loss wasn’t ideal but there were plenty of positives from the performance. Along with producing their highest expected goals difference of the season, there was a clear positive response to the tactics Marsch is implementing.

Leeds played with 4-2-2-2 shape both in and out possession. At times out of possession, the shape resembled a 4-2-4. The front four players blocking Leicester from playing centrally and forcing them out wide to the full-backs. 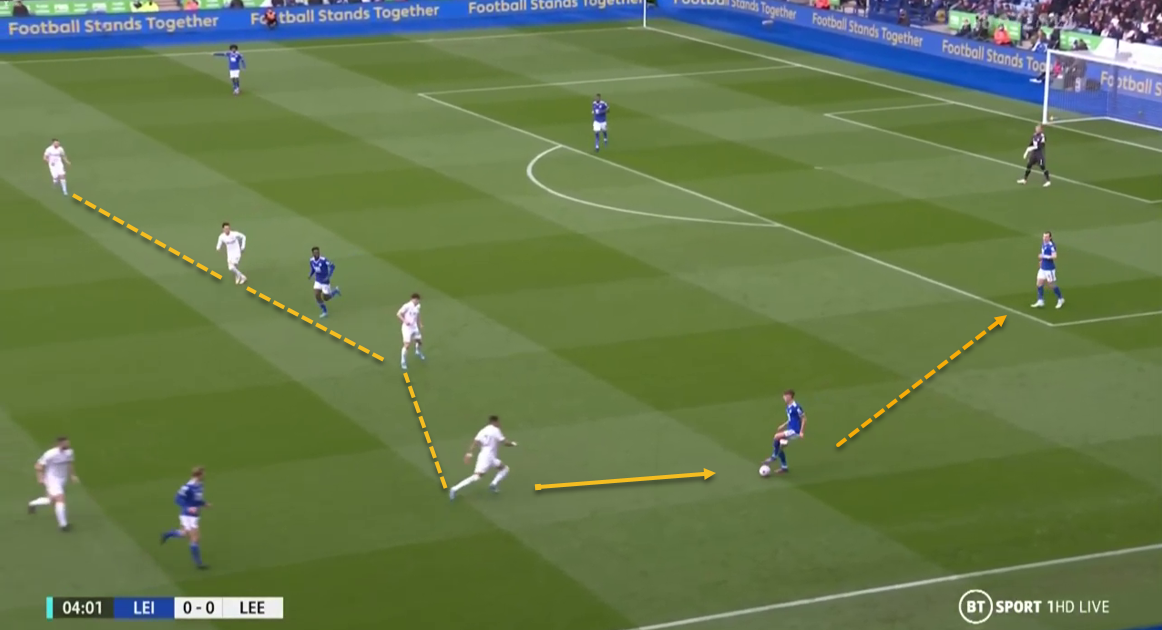 You could see that Leeds were focused on a ball oriented press. As shown in this analysis this is a key feature of Jesse Marsh’s pressing strategy. They were able to get beyond Leicester’s midfield and create numerical advantages on their defence regularly throughout the match 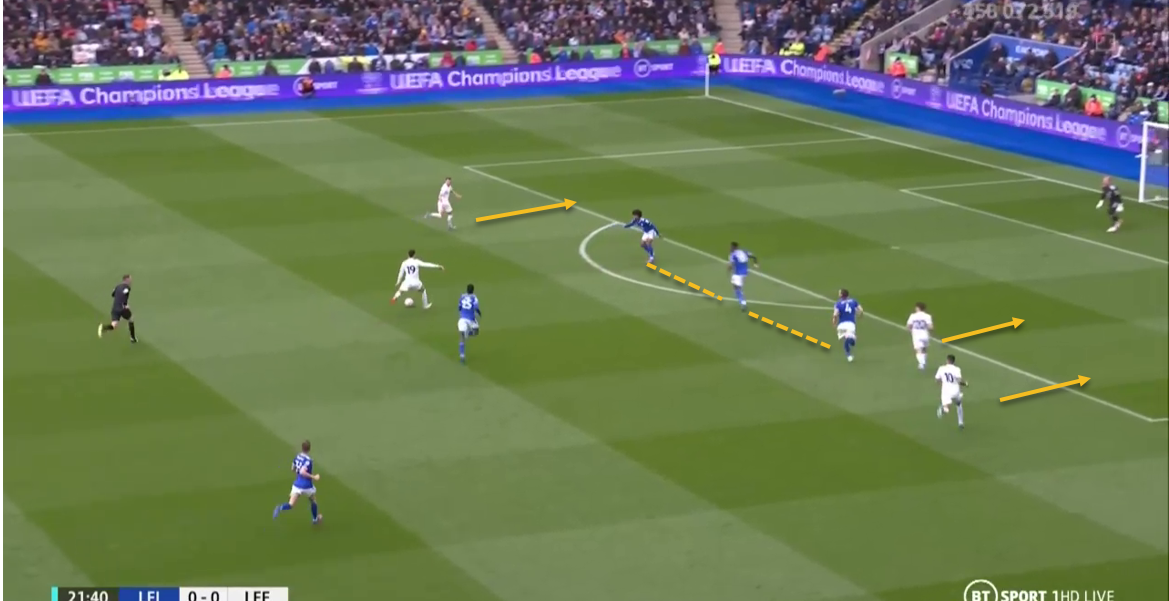 They penetrated the attacking third by creating overloads centrally. Leeds got beyond Leicester’s back four regularly with runs from the outside. Overall Marsch will have been pleased with how well Leeds played in each phase of play. Out of possession they abandoned the man to man marking style from Marcelo Bielsa and adapted very well to his ball orientated press, forcing Leicester to play long.

In this analysis we have shown the key principles that Jesse Marsch has implemented throughout his time in European football.

Leeds United are in a precarious league position. Despite this, intense pressing and quick attacking play will remain a fundamental part of  Jesse Marsch’s tactics. He will place a high emphasis on the club having a positive and proactive mentality. If the club buys into this, then Leeds United will remain an extremely exciting team to watch throughout this period.