Karim Onisiwo is a 29 year-old Austrian centre-forward currently playing for Mainz 05 in the German Bundesliga. He had played the entirety of his career in Austria until January of 2016 when Mainz stumped up €1.5 million for his signature from SV Mattersburg. He has grown into becoming a key member of this Mainz side, who at the time of writing sit in ninth place in the league. Onisiwo is having a stellar campaign this season, having scored five goals and made nine assists. He ranks joint fourth in the league for assists, along with Andrej Kramarić, David Raum, Christopher Nkunku and Bayern Munich’s Leroy Sané. Not bad company, whilst above Borussia Dortmund duo Marco Reus and Jude Bellingham.

The Austrian is predominantly a centre-forward, but can also operate as either a number 10 or as a winger. Mainz have predominantly played with a front two this season, with Onisiwo playing as part of this partnership.

This tactical analysis and scout report will provide a breakdown of some of the key facets of Onisiwo’s game.

Standing at 1.88m, or 6’2”, in height, Onisiwo has a good frame to lead the line as a centre-forward. He has impressive hold-up play, and is comfortable receiving with his back to goal, and yet he is a skilful individual too, who can not only delay possession through his dribbling, but also navigate tight areas to evade pressure.

He is a frequent dribbler and uses it in areas like the one shown below, as much as he does in the final third to break past a defender in an isolated 1v1 duel. Onisiwo averages 8.48 dribbles per 90 in all competitions this season, with a 45.6% completion.

Below we see him operating as one of the furthest forward Mainz player, receiving the ball in transition, and not only retaining possession through his ability to dribble past the two surrounding players, but also delaying possession enough to allow his teammates to arrive forward. 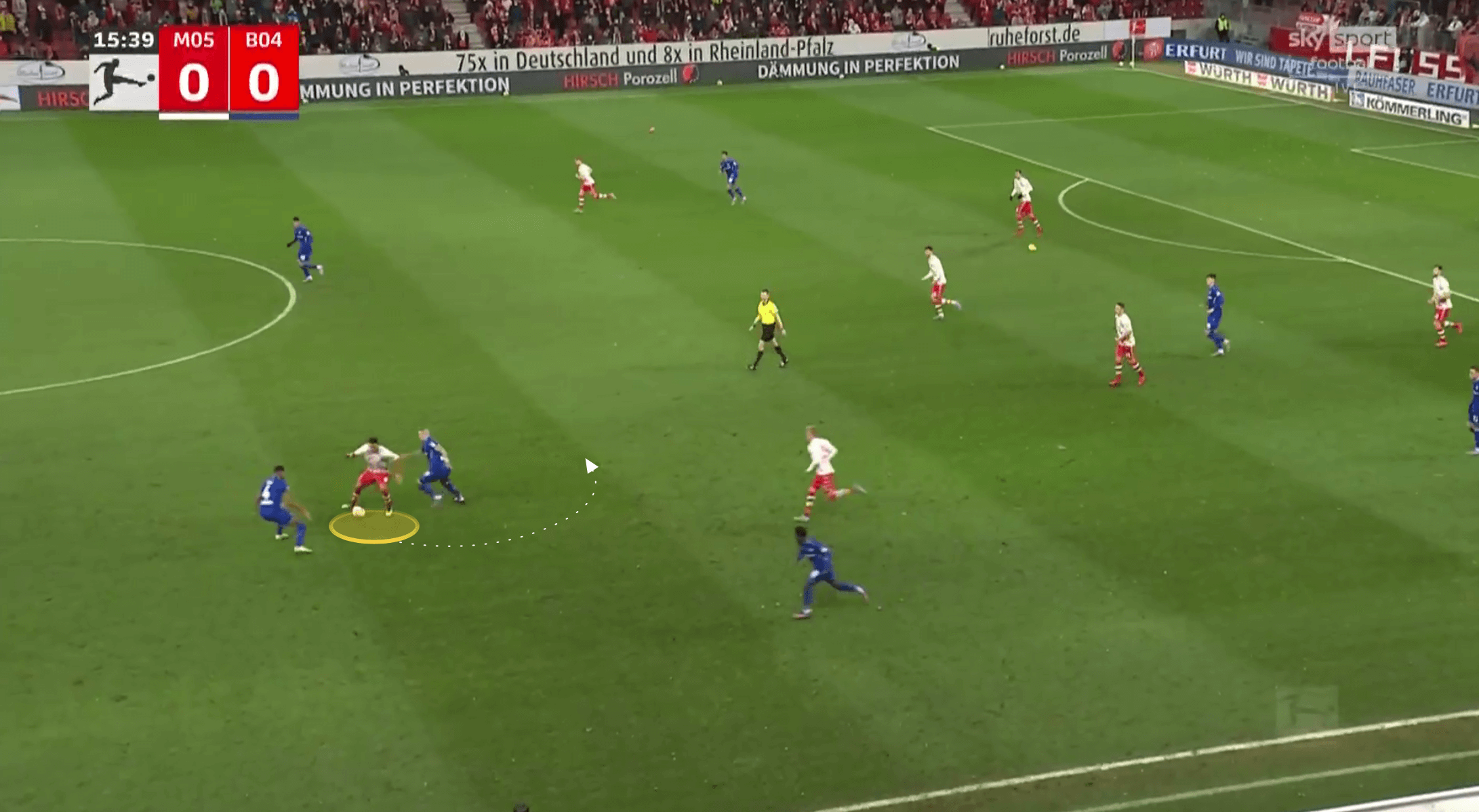 Following this dribble he then expertly clips the ball into the space behind, accessing the space behind the opposition full-back, whilst his winger latches onto this through pass. 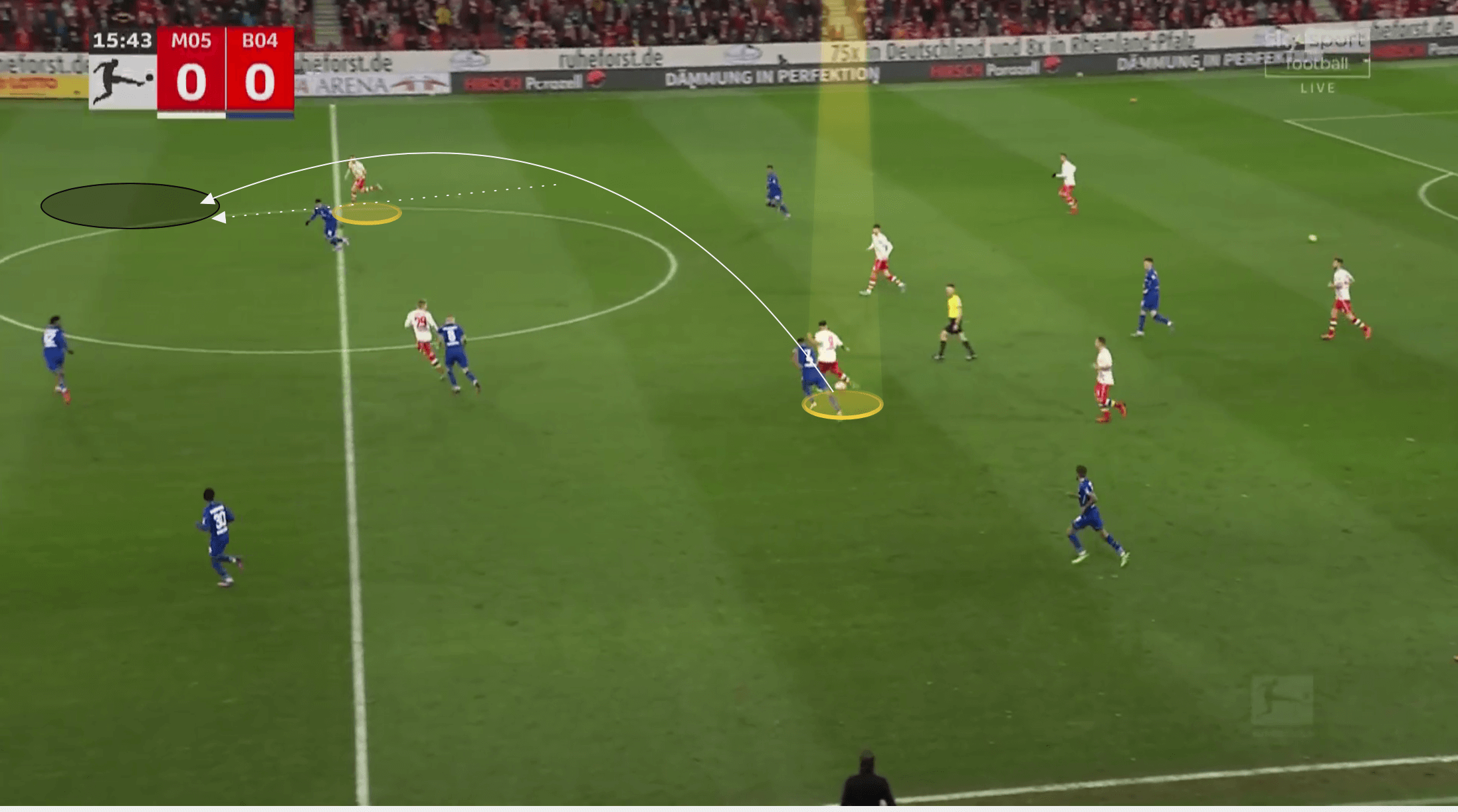 Onisiwo’s heat-map makes for interesting viewing and gives more of an insight into his overall positioning and tendencies in the possession phase.

Whilst there is a good amount of action within the opposition 18 yard-box, which is encouraging to see, it is interesting to see the lack of action outside the area in a central position, and conversely, the amount of action on either wing, particularly on the right-flank. 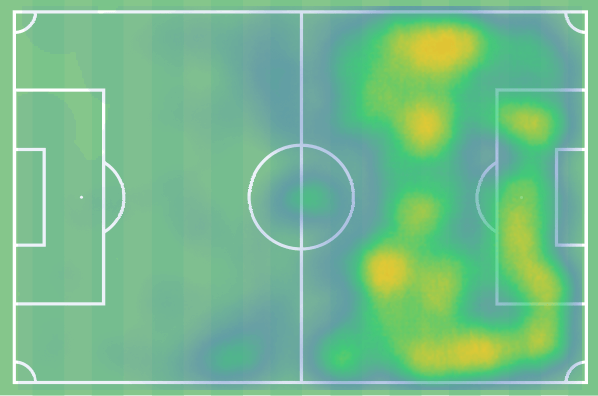 Whilst Onisiwo can operate as a traditional centre-forward, occupying central positions, he is also given a lot of freedom to explore the width of the pitch, which he does so freely. Onisiwo enjoys dropping into the half-spaces to get on the ball, whether facing goal or with his back to it, but he will also take advantage of any opposition full-backs being drawn out into high and wide positions and subsequently will fill the space they have left vacated on the wing.

With the opposition centre-backs reluctant to follow him into these positions, Onisiwo can gain enough space to receive possession directly and create from.

The image below shows Mainz during a basic build-up phase. As the ball is played inside and then forward to Jae-Sung Lee, the South Korean international dummies, and allows the ball to continue forward. 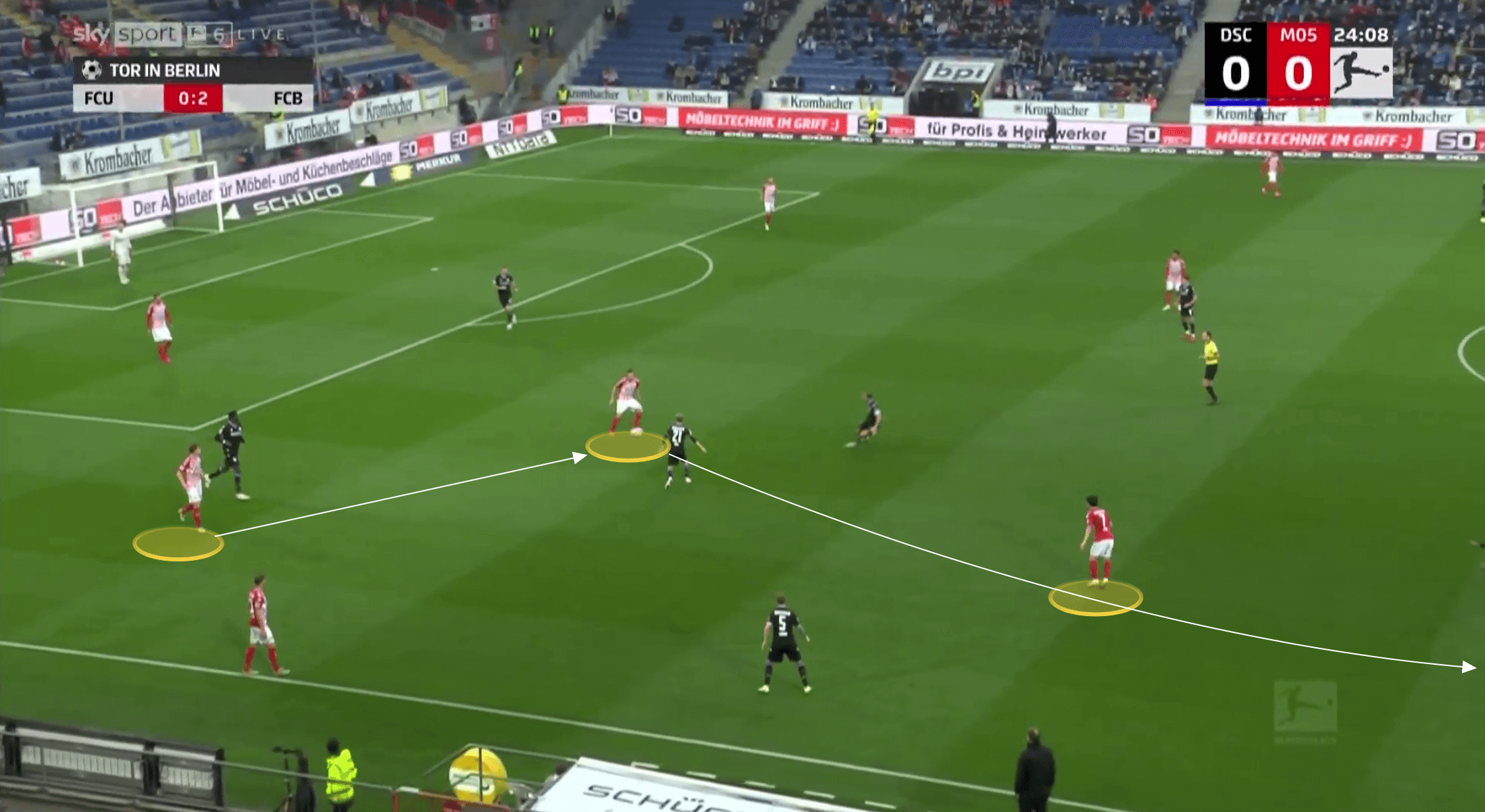 In doing so he allows the ball to roll forward to Onisiwo who has drifted out wide into this aforementioned position, leaving him in a 2v2 with strike partner Jonathan Burakdt, against the opposition centre-backs.

From this position Onisiwo varies his decision-making. He can drive forward, and cross or shoot, or immediately play the long ball in behind, and he has ability with whichever method he chooses. 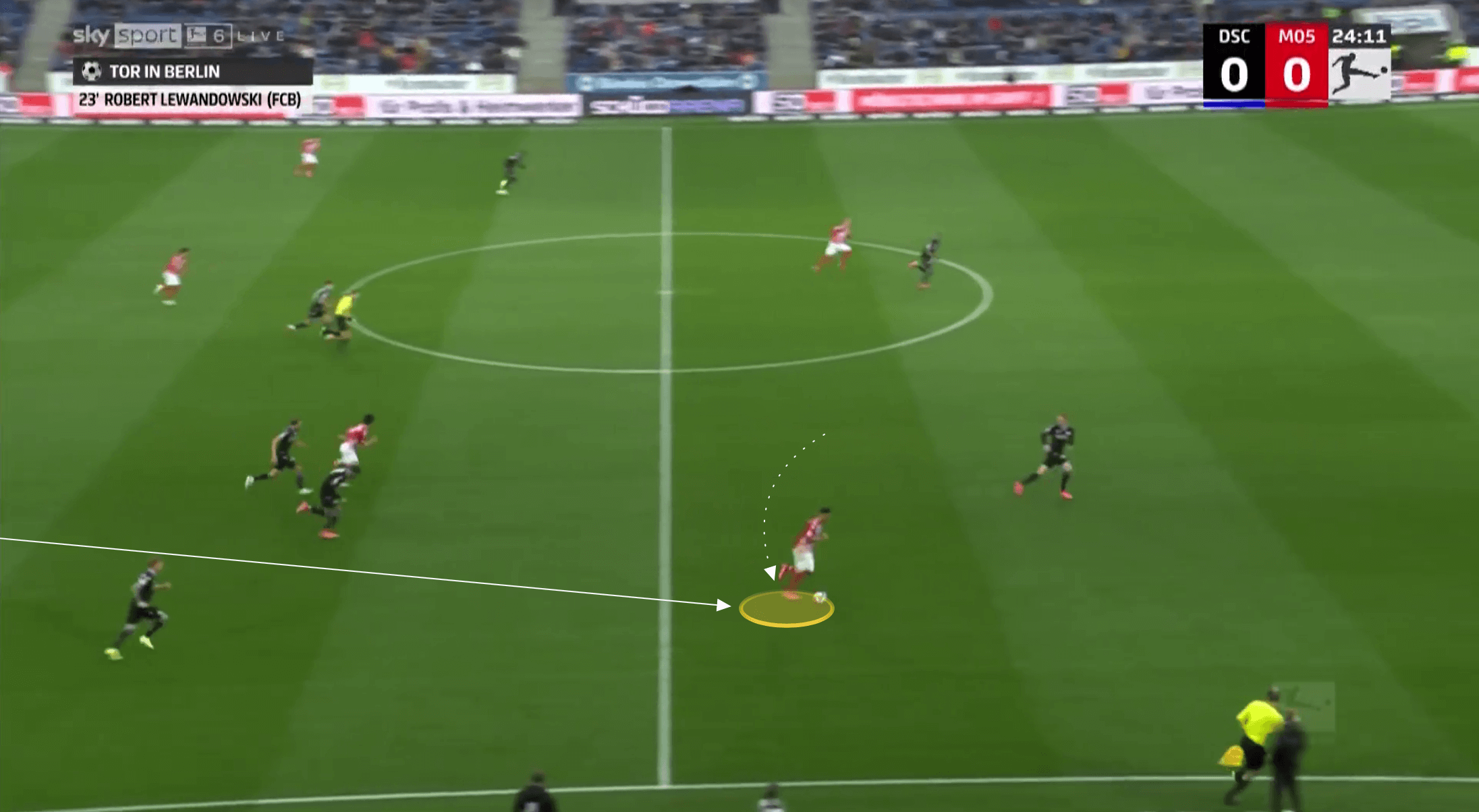 We can see a similar example in the following image once more, where this time Onisiwo, who has drifted into this wide position again, is played in behind with a through pass that has been overhit. 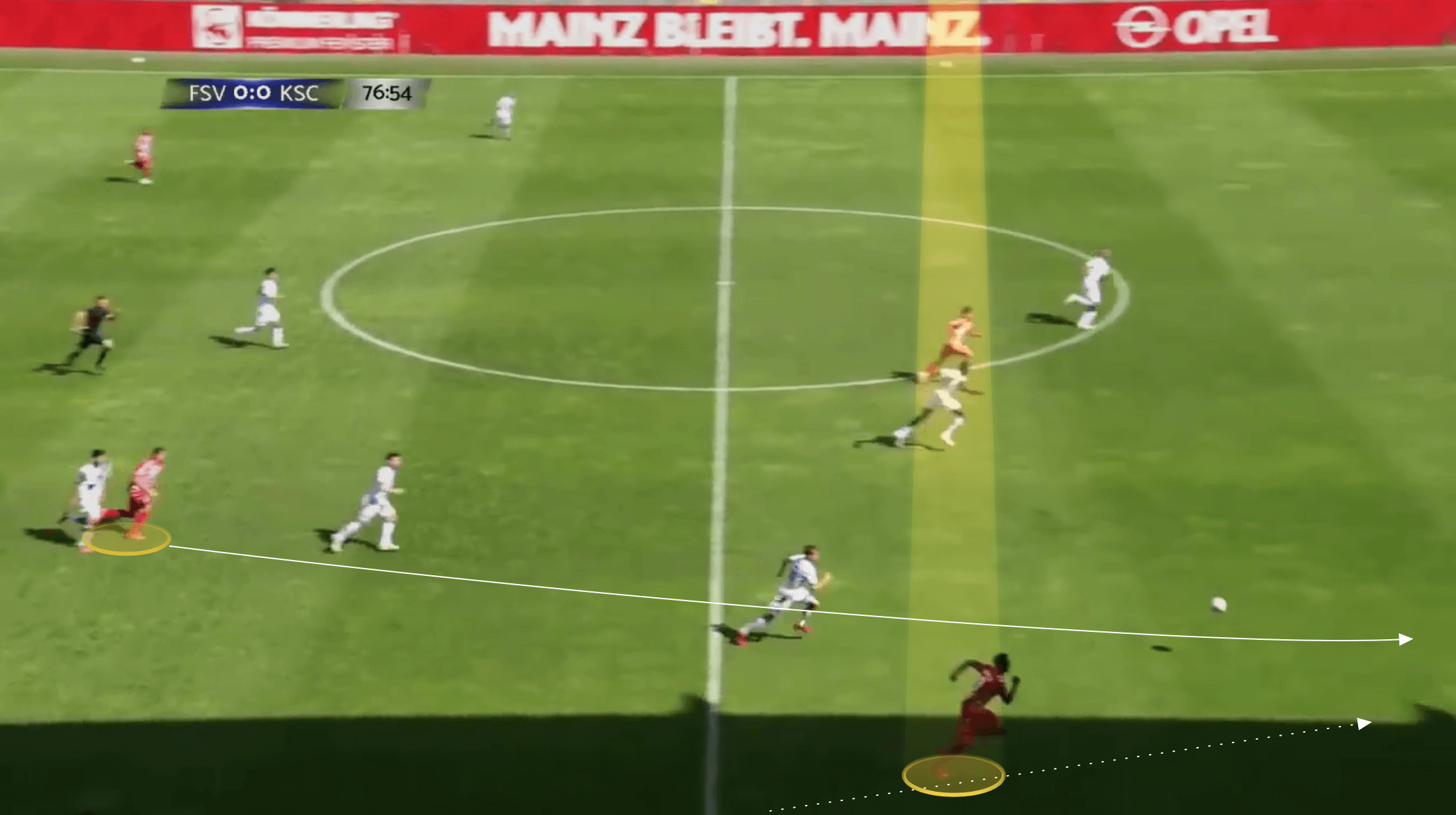 The Austrian forward has the pace to outrun defenders in this scenario, and is confident taking on the early cross if the ball isn’t initially angled towards goal.

Onisiwo has a penchant for peeling off of the shoulder of his marker. He will do this in build-up play, but more devastatingly he does this in the final third. This very simple, but nevertheless highly effective movement, has led to several of his goals this season.

We can see an example below against Greuther Fürth, where with the congestion in the area, Onisiwo uses the fact that the defenders have their eyes solely on the ball to drop off and give himself a couple of yards at the back post, before easily heading home from this distance. 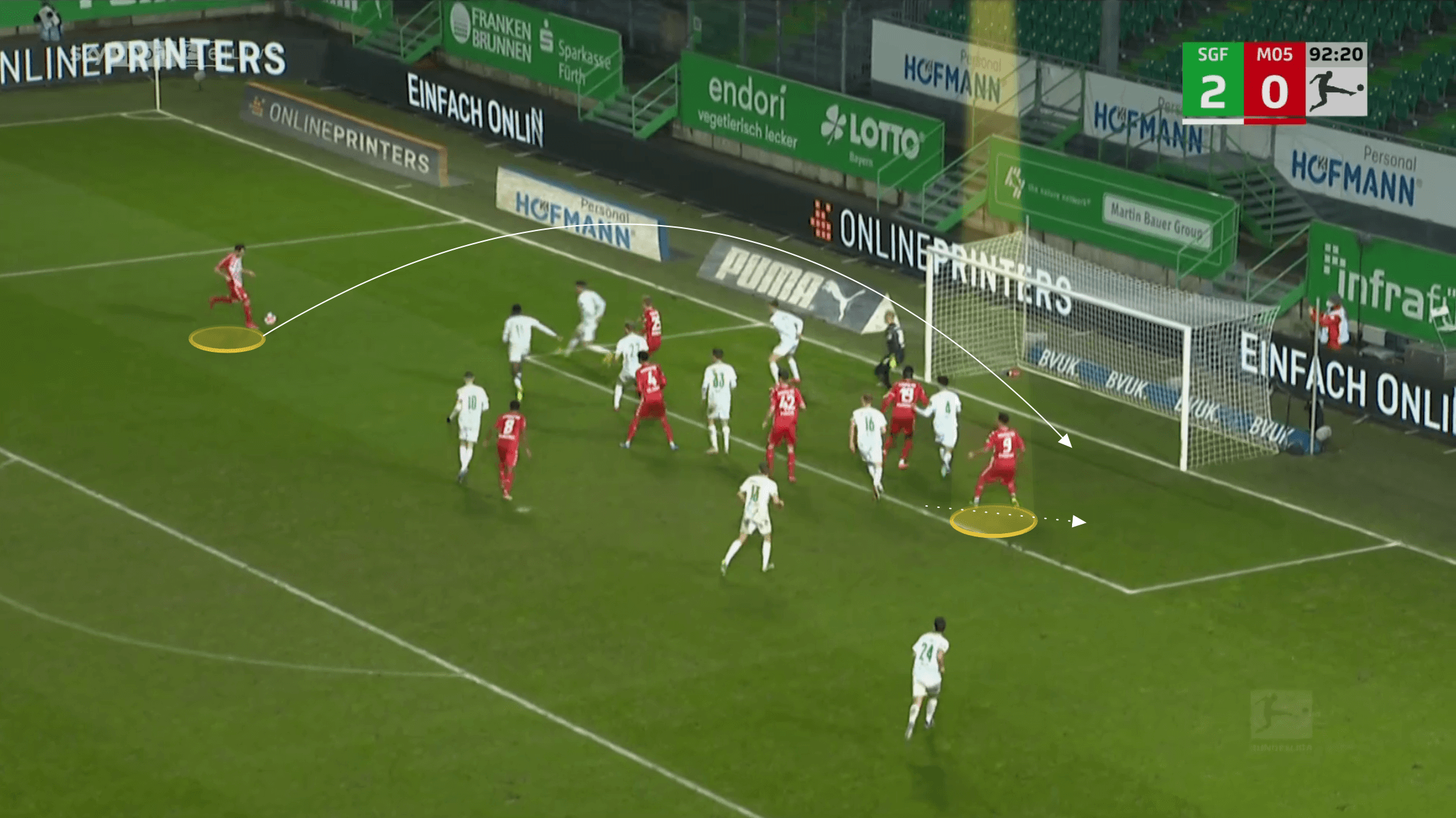 He is happy to leave the central channel entirely vacant and match himself up against the opposition full-back. On quick breaks like the one below, he positions himself outside of the full-back, where the defender has to watch the ball and Onisiwo’s movement.

The Austrian forward could do this to the centre-back were he positioned slightly inside, but then the full-back would be behind him, and able to intervene and overload him if necessary. 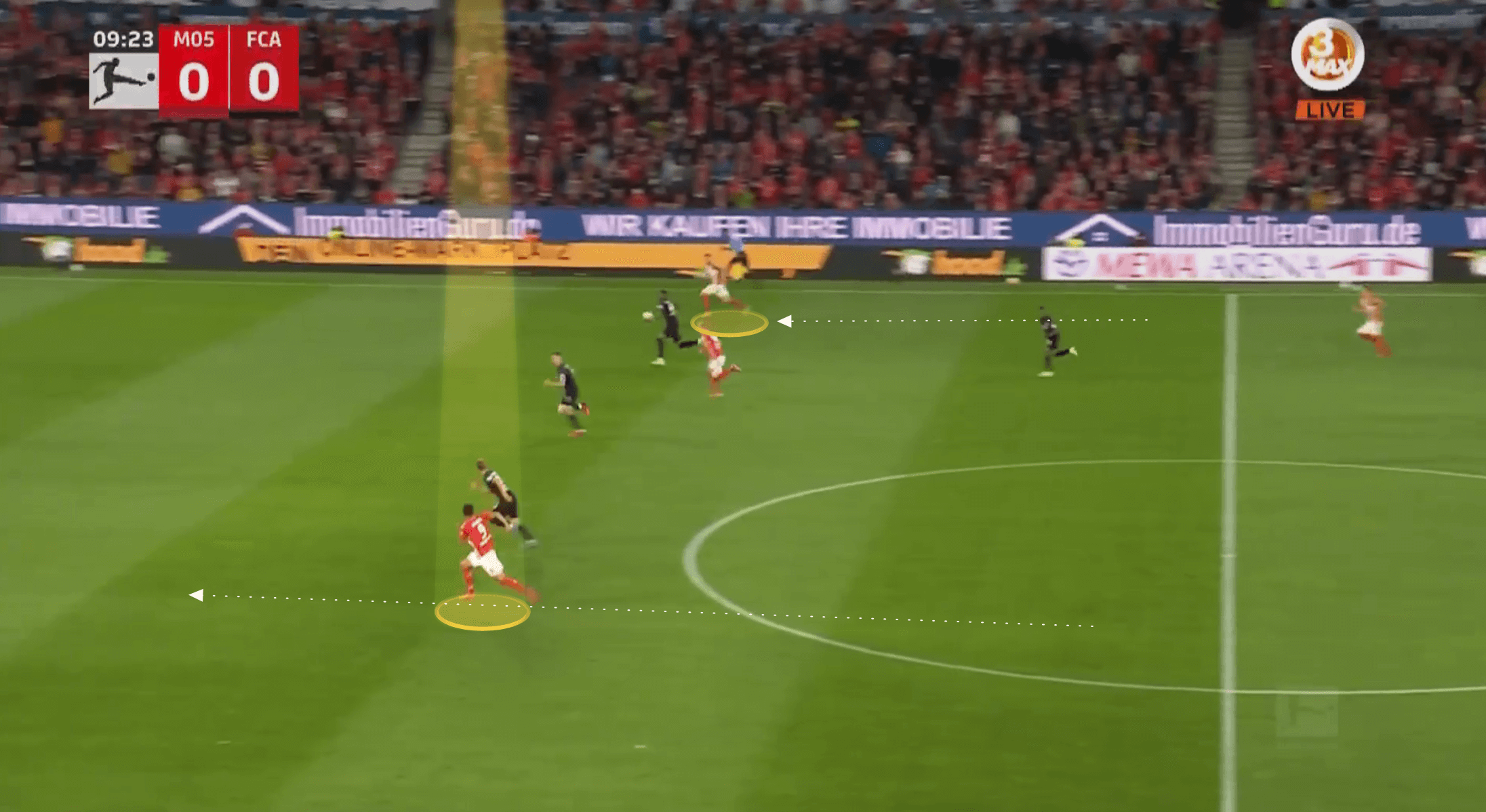 In this example Onisiwo is found with the pass across goal, and yet rather than taking the shot on early, has the composure and vision to cut inside back onto his right-foot, sending both the defender and the goalkeeper the wrong way, before scoring. This tendency to cut back on himself is something we see Onisiwo use to great effect with his dribbling that can lead to goal scoring opportunities for either himself or his teammates. 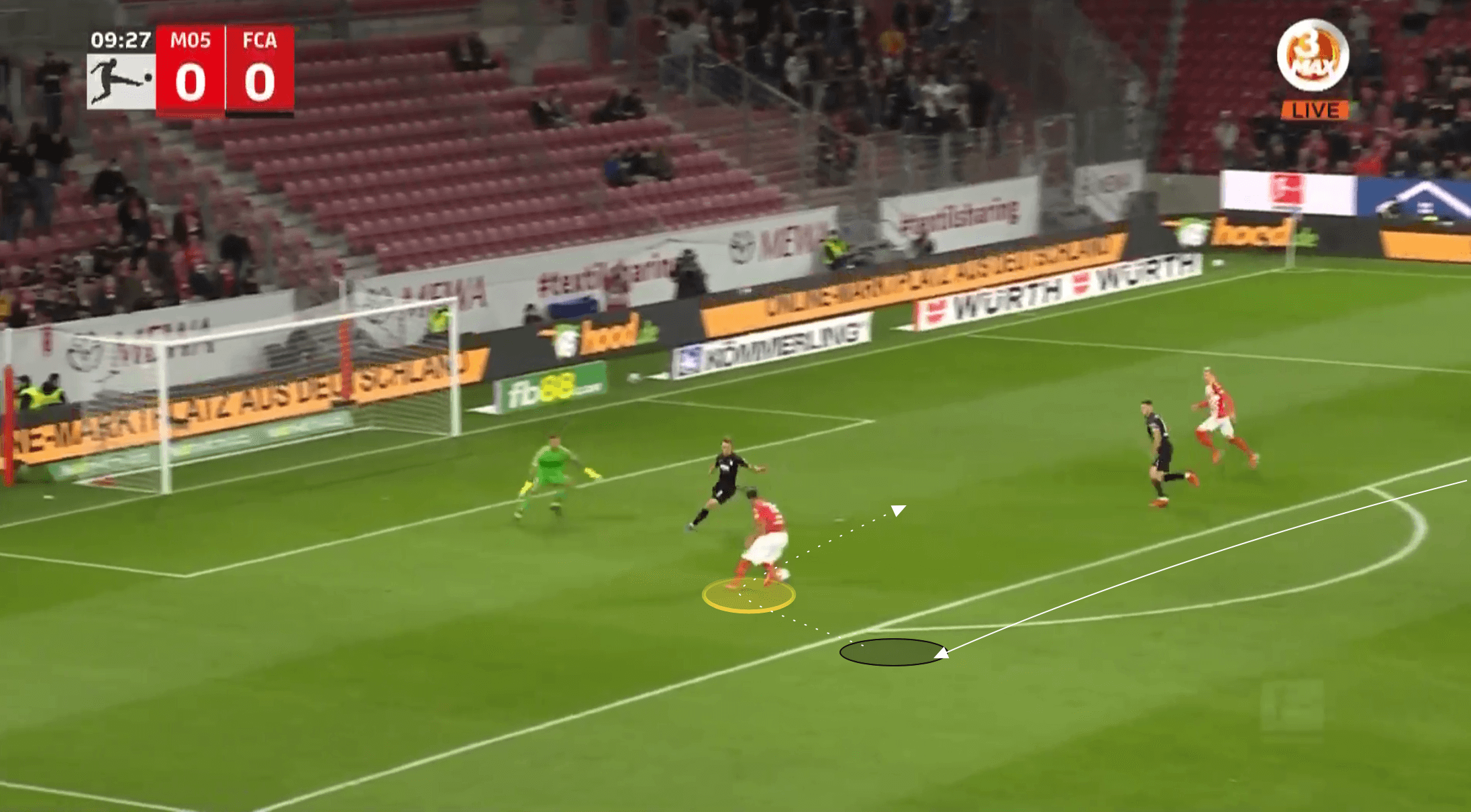 Again we see him playing behind the full-back in the next image, choosing to arrive late into the penalty box as the ball is delivered. Whilst he has plenty of room left to cover here, Onisiwo’s timing on his runs is good and is able to attack these types of crosses with momentum. 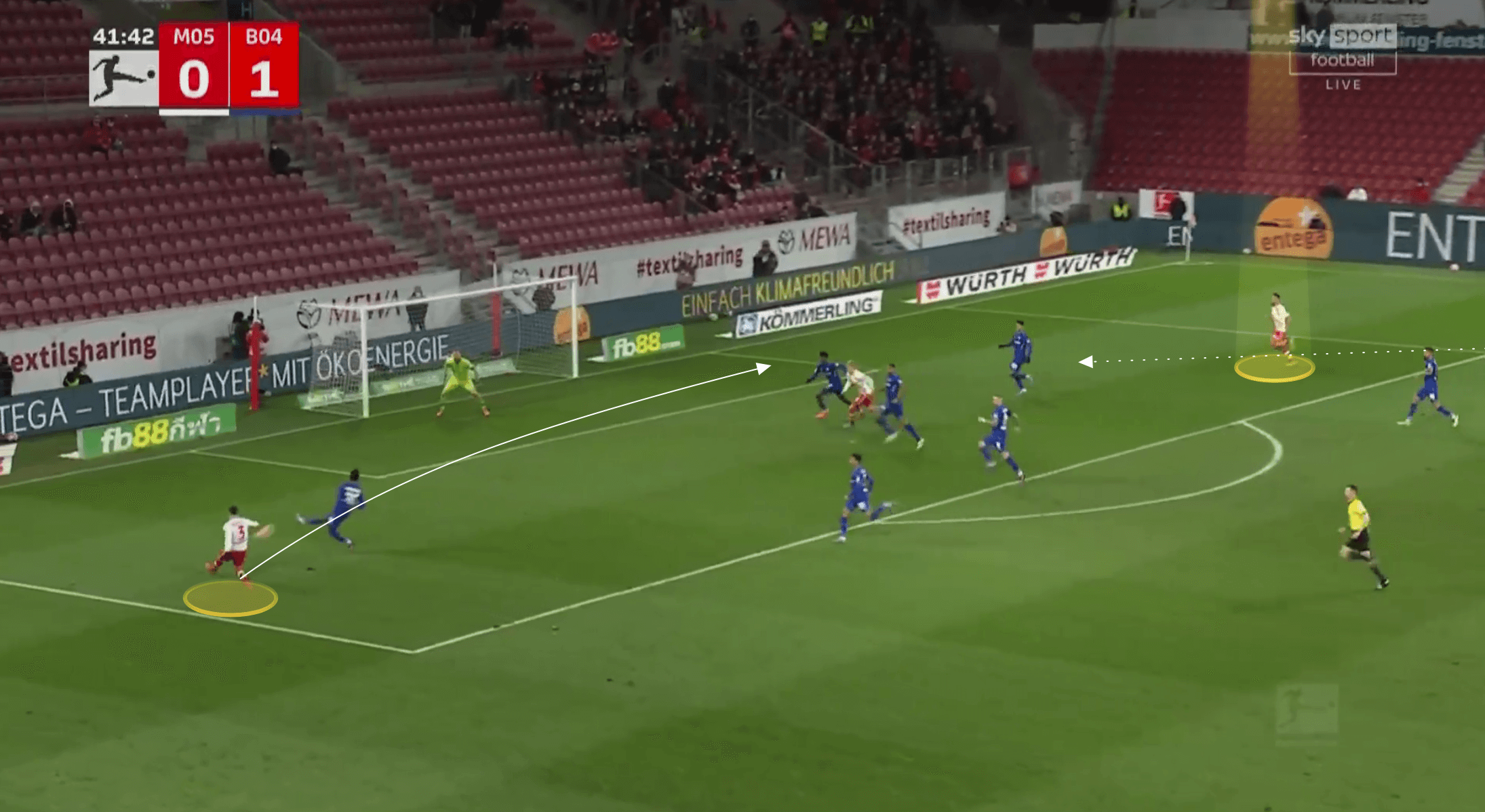 The final section of this analysis looks at the part of Onisiwo’s game where he has truly stood out this season, which is his ability to create.
What we see throughout his game is plenty of quick touches, movements off of the shoulder of the defender, and simple but effective passes in the final third. However, on top of this he still has an instinct and the vision to go with this, for a more ambitious pass too.

Below we can see Onisiwo employing one of his favoured tactics once more, again dropping off of the shoulder of his marker to receive the through pass. Again we can see how he is comfortable leaving the central space open.

As the pass is threaded through to him, he simply opens his body up and bounces the ball into the space behind the Hoffenheim defence for Jae-Sung Lee to latch onto. 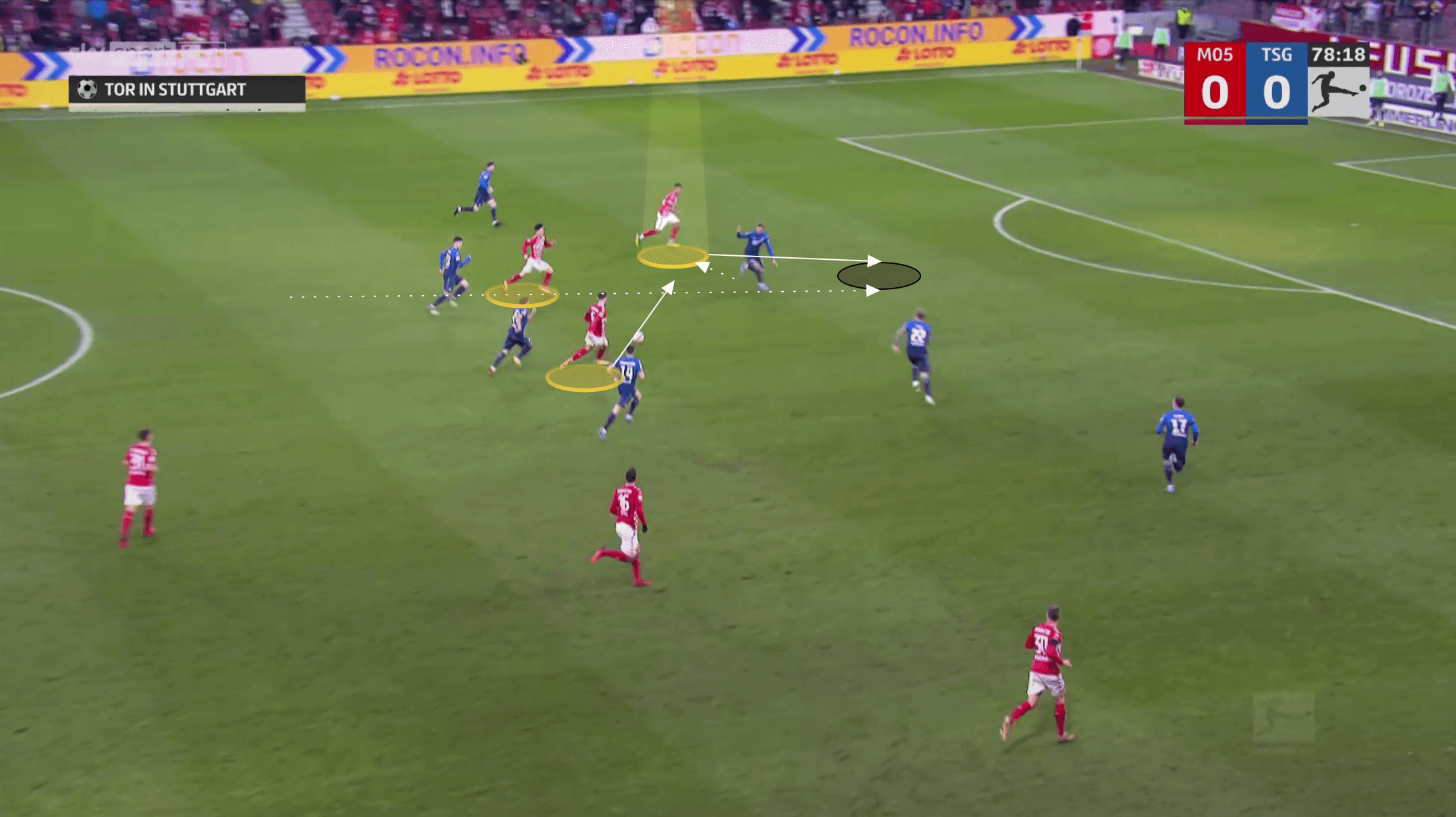 We can see similar forward play from Onisiwo in the next example, albeit this time with him in a more central position, with his back to goal and marked tightly. When playing in such a position, mainz look to have runners off of either shoulder of their target man.

As the ball is played through to him, Onisiwo lays it off to Jae-Sung Lee first time, before spinning off once more and latching onto the bounce pass from his teammate. 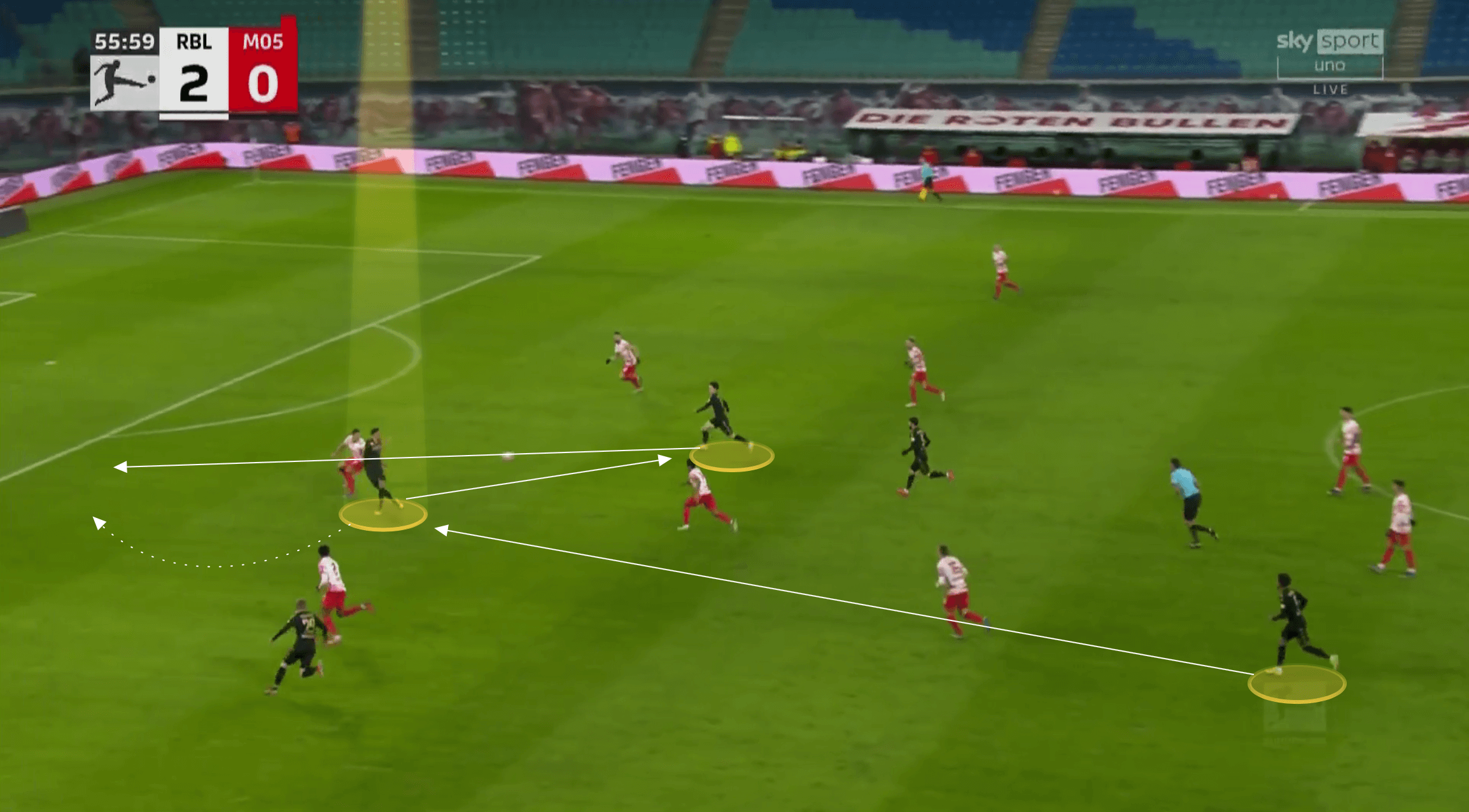 Here we see the forward use the cut back once again to thwart the onrushing Leipzig defender, before simply laying the ball back into the path of Jae-Sung Lee for the simple finish from close range.

As already alluded to, whilst he is particularly devastating when combining with players in tight areas, and his movement can create enough space to allow him to find an easy pass in the final third, he does have an eye for the more audacious.

Against Augsburg earlier this season he showed outstanding quality to loft a bouncing ball across goal for Burkardt to latch onto. 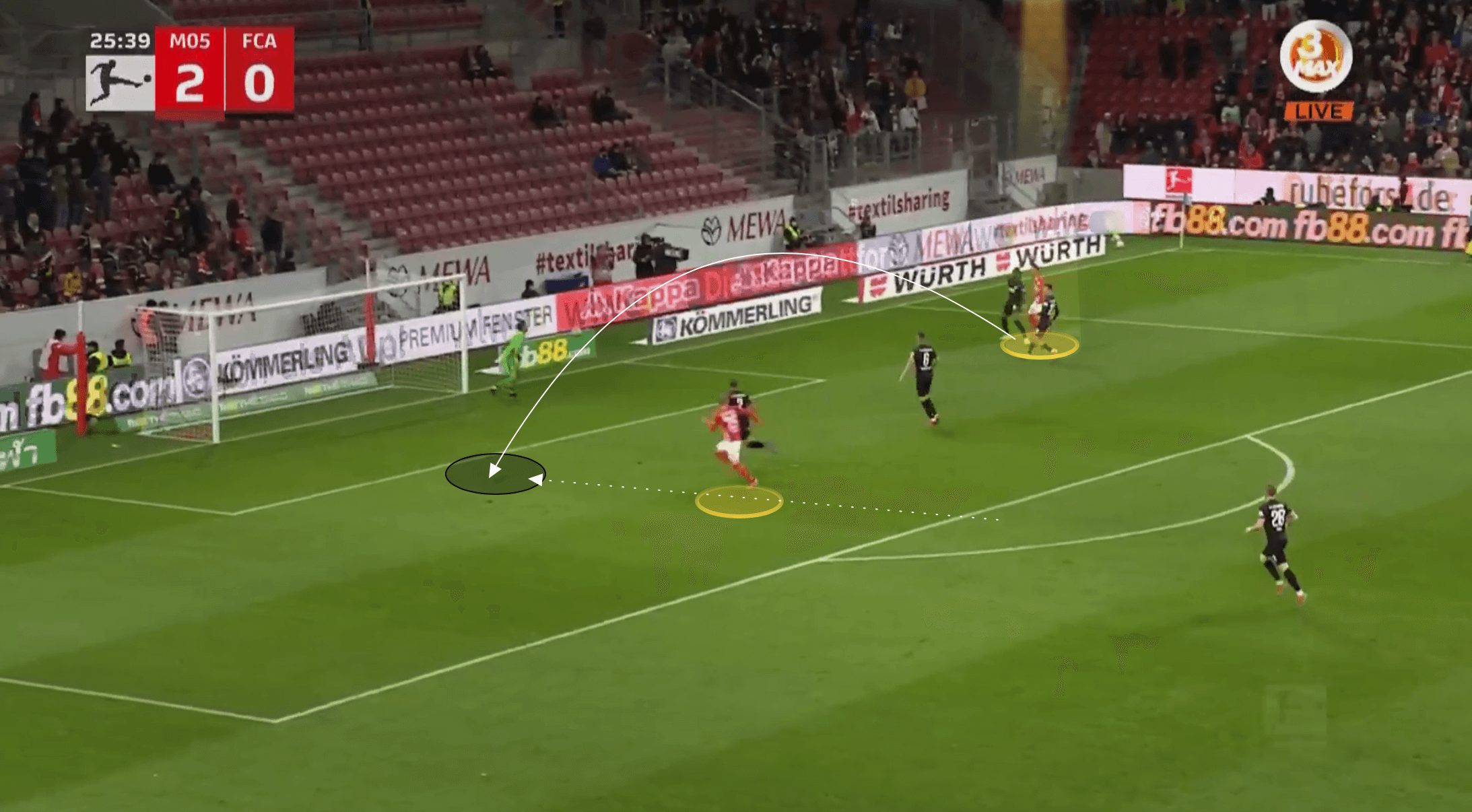 However, perhaps his most impressive assist came against Greuther Fürth. We initially saw his ability to beat players in tight areas in the final third, where, with his back to goal, Onisiwo managed to turn his marker and use his strength to keep them at bay before instinctively drilling the ball across goal without looking up. 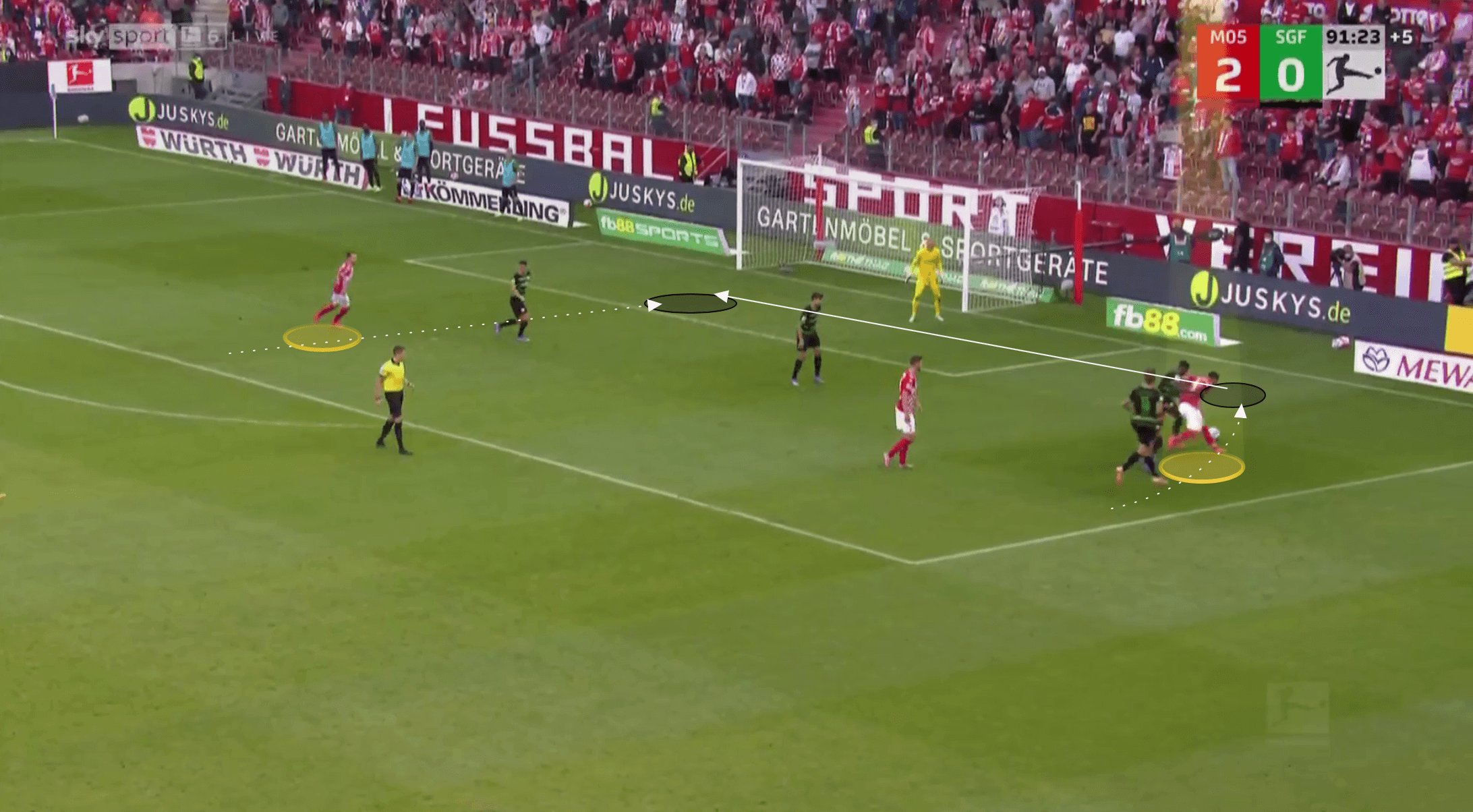 At 29 Onisiwo is in the peak years of his career and is having an excellent season with Mainz so far. The Austrian has admitted aspirations to play for Liverpool, which seems very unlikely, however, he is a strong player for a mid-table side in one of Europe’s top divisions, where he can contribute with goals, but more so with his creativity. Onisiwo is a well-rounded athlete, with pace and strength, and as a footballer he possesses highly intelligent movement to create space for himself and others in the final third, and the technique and composure to pull off either simple or more difficult passes in pressured situations.