Milan Women hosted Napoli Women at the Vismara sporting centre for the 16th fixture of Serie A Women and the game ended with a 1-1 draw that doesn’t suit either team. In fact, Milan lost two important points in their battle for the UEFA Women’s Champions League spot with Roma, Sassuolo and even Inter who are now four points behind Milan. At the same time, the Rossonere are now just two points away from Sassuolo and five points away from Roma, the holders of the second spot. And let’s not forget that the battle for the title is still open as well since Juventus are at the top of the standings with three points ahead of Roma. Therefore, nothing is decided yet and the battle between the top teams will surely be more intense during the final games of this season.

On the other hand, the Azzurre are actually on the edge of relegation since they have the same number of points as Fiorentina Women. However, Napoli have -9 goal difference while Fiorentina actually have -6. If things stand as they are, these numbers relegate Napoli, Lazio and Verona since the priority in terms of classification is for points then for goal difference, before resorting to exploring the number of goals scored and the head-to-head points.

In this tactical analysis article, we will break down the tactics used by both teams in this match to identify the reasons that led Milan to give away two important points at home, while at the same time exploring how did Napoli get back in the game after they were behind in score for almost the whole 90 minutes. The analysis will therefore include the identification of the tactical mistakes made by both teams.

Maurizio Ganz preferred to start the match with the 3-4-3 formation, relying on Laura Giuliani as a goalkeeper, Guðný Árnadóttir, Laura Agard and Laura Fusetti in defence, Sara Thrige and Linda Tucceri as wing-backs, Greta Adami and Christy Grimshaw as central midfielders with both Valentina Bergamaschi and Lindsey Thomas playing on the wings and forming a front-three in support of Miriam Longo, the team’s striker.

On the other side, Napoli Women used the 3-5-2 formation with Rachele Baldi in goal, Heden Corrado, Lana Golob and Aurelle Awona as centre-backs, Kaja Eržen and Sejde Abrahamsson as wingers with Sofia Colombo, Sara González and Claudia Mauri playing in midfield in support of the two strikers, Romina Pinna and Sole Jaimes.

Milan started the match very well since they were able to score the first goal of the match at the second minute following a fatal defensive mistake from the three Napoli defenders. The action started following a throw-in that was played quickly towards Bergamaschi who noticed the possibility of passing the ball to Thomas who can run at the back of defenders. Bergamaschi’s key pass was the catalyser of this goal especially when knowing that she had the idea of the pass before receiving the ball. But then, Thomas deserves all the credit for not giving up despite seeing three defenders ahead of her. She did her best to overcome all of them and get the ball ahead of everyone and shoot towards the net.

What facilitated her mission in this action was the poor follow-up from the defenders. One of the two defenders who were so close to Thomas left her teammate in a one-on-one duel with Thomas instead of continuing the run in order to have a numerical superiority and intervene before letting Thomas get the advantage. If necessary, she could have just put her body in front of the ball to protect it and prevent such action from happening. Yet, the defender was intending to cover for the other side of the pitch in case someone from Milan becomes unmarked in inside the box. However, it would have been more efficient to continue the battle against Thomas and prevent her from touching the ball, because that was possible. 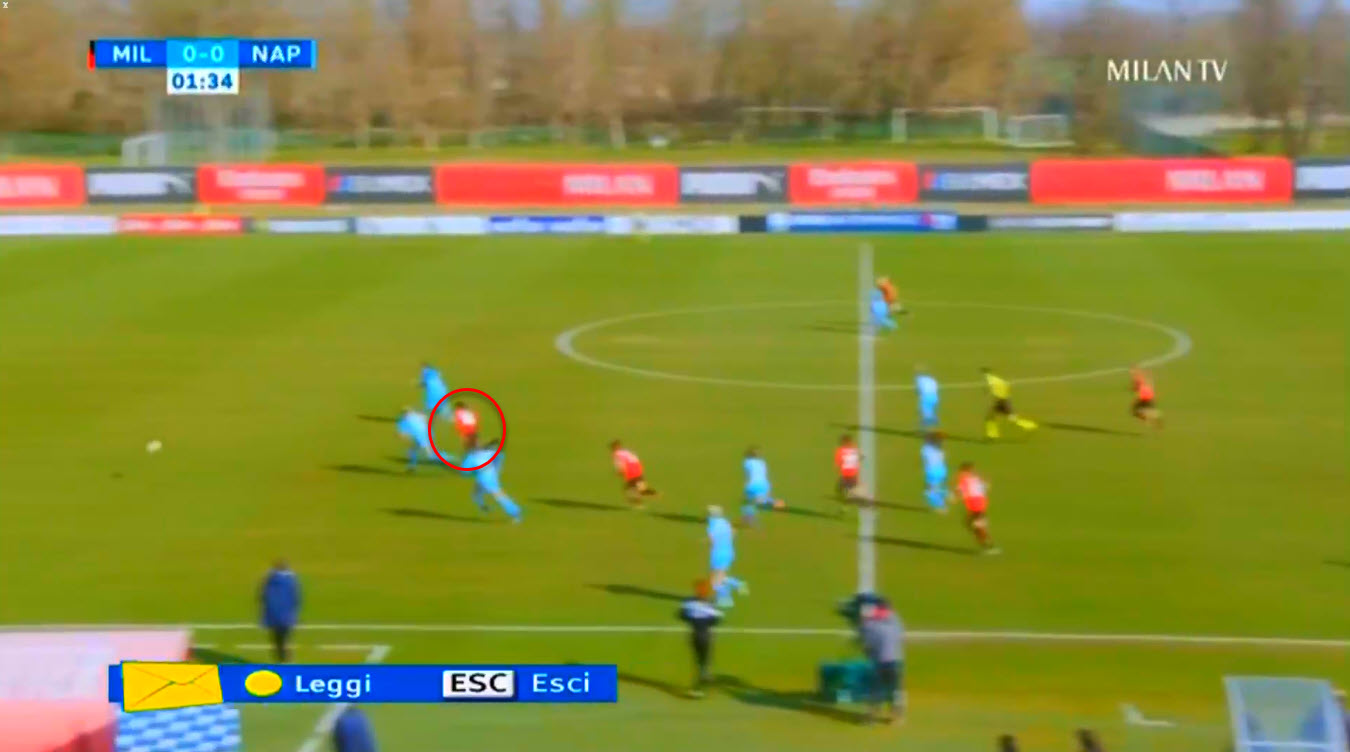 Following the goal, Milan created some chances and were able to reach the penalty box several times, but they lacked accuracy in their final touch. Moreover, some of Milan’s attacking actions showed a lack of organisation and especially a lack of attacking ideas. The same patterns were attempted without really focusing on creating something new to confuse and evade from Napoli’s defence.

This absence of ideas was noticeable during some of Milan’s actions such as during this attack when Tucceri received a pass inside the box but preferred to go for the individual option without thinking too much and without checking if her teammates are better positioned for shooting. This can only mean that the players are not well trained on specific combinations or movements in attack because there was an absence of such things in the final third. 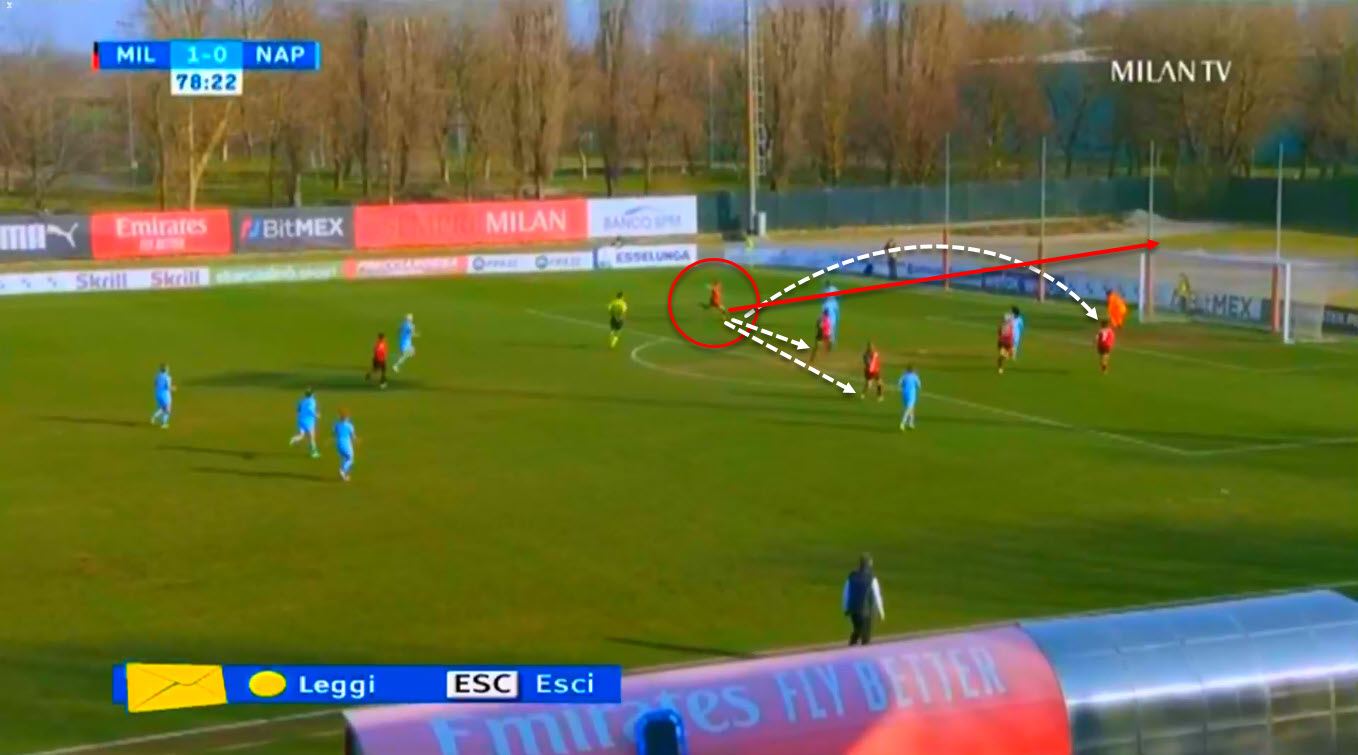 In addition, Milan were not able to exploit the space left behind Napoli’s defensive line which was high especially during the last third of the second-half. To support this idea, it’s sufficient to look at Bergamaschi’s strange miss of a golden opportunity following an excellent through pass from Refiloe Jane that went directly towards Bergamaschi who was completely unmarked after she escaped from the offside position intelligently and moved very well to meet the ball at the back of the defender. However, her finishing was very poor and this was the chance that could have decided the match, hence the importance of individual finishing trainings and of keeping the concentration in front of goal until the last seconds of the game. 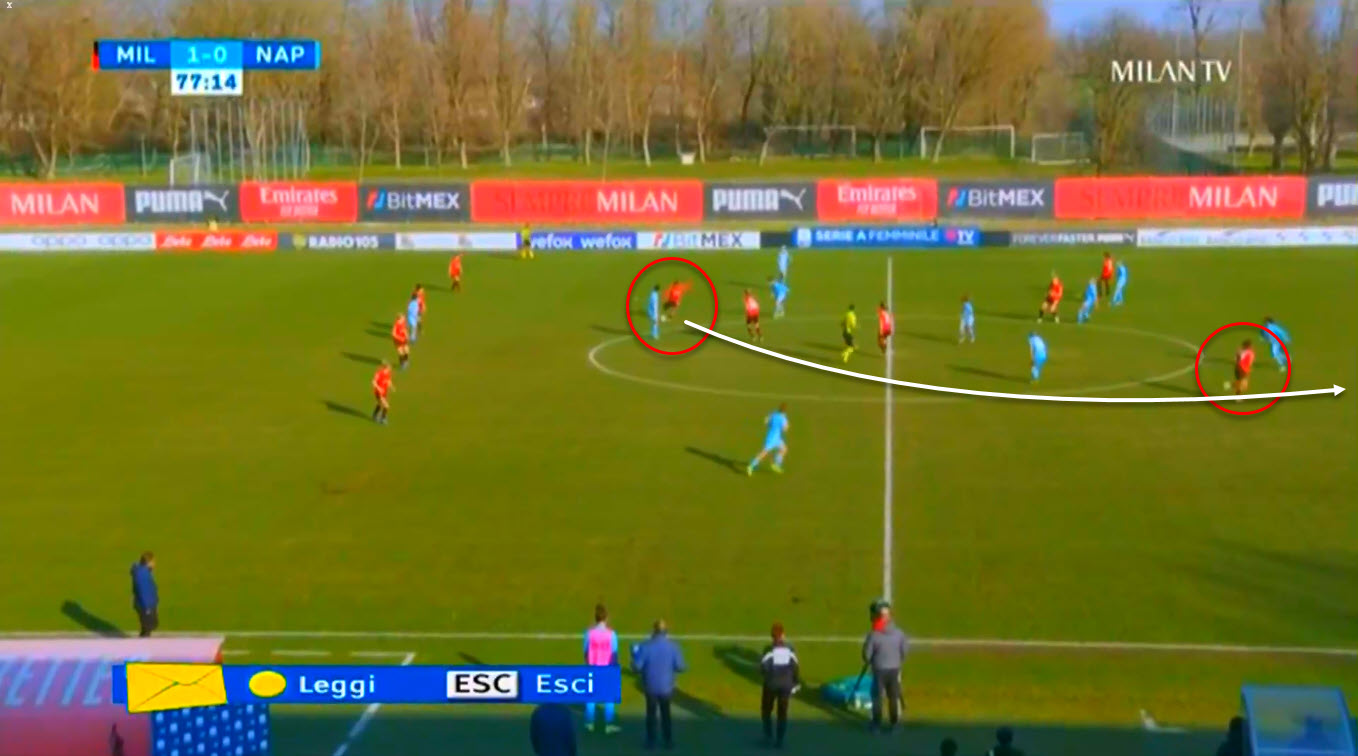 It is true that Napoli got a precious point from a complicated away match. Yet, there are plenty of things to fix especially in defence if the team wants to keep their chances alive this season when it comes to remaining in Serie A Women.

Napoli made some dangerous mistakes that could have easily costed them the match, such as the marking error during Thomas’ goal and the exaggeration in keeping the defensive bloc high during Bergamaschi’s action at the 77th minute.

Nevertheless, the team should be proud of the result they made despite everything as they should address the marking issue which is mainly related to the lack of communication between the players during such attacks.

Concerning their attacking performance, Napoli could have been more dangerous in this match as they were able to score more than one goal if their passing accuracy was on point. They had the opportunity of overcoming Milan’s defensive lines especially when the latter were unorganised at the back. As an example, if this through pass was delivered with more precision like the red arrow shows and not like the white one, the attacking Napoli player was about to find herself right in front of goal, creating a super goalscoring opportunity. 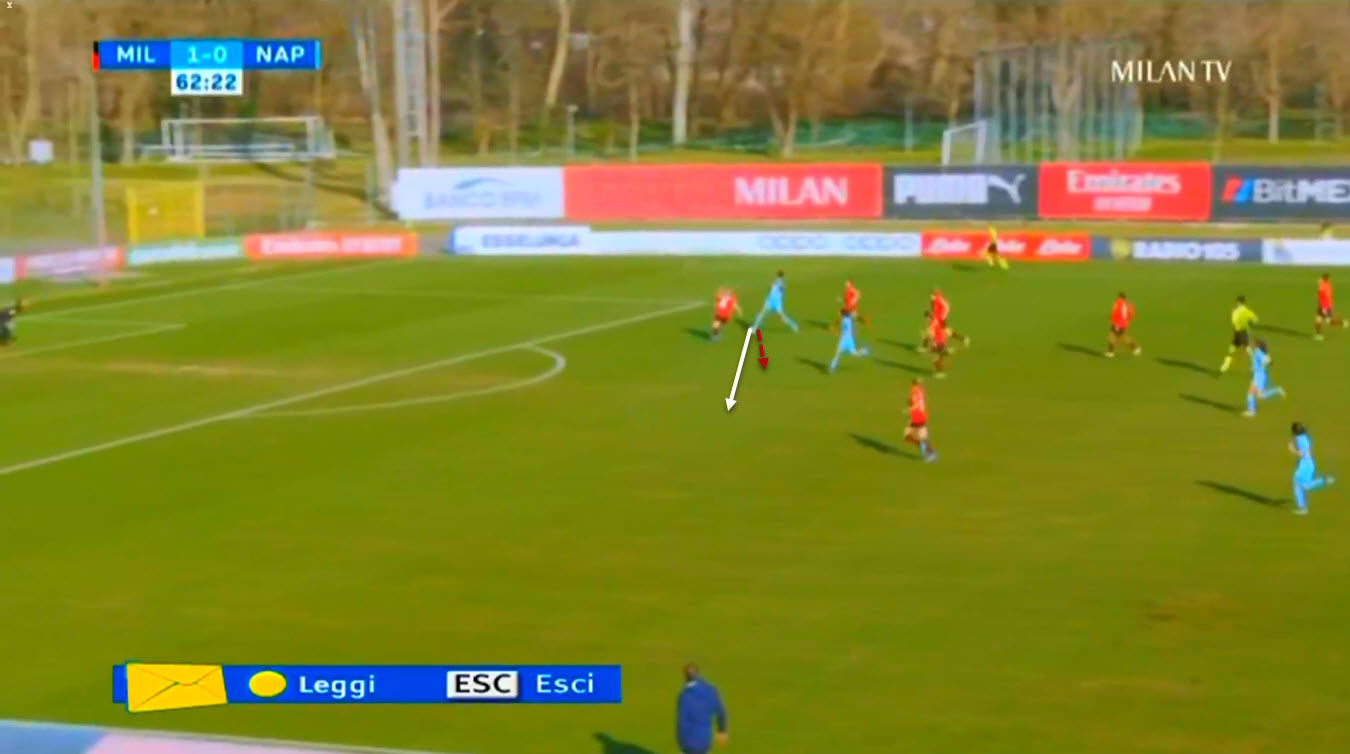 In addition to this chance, Napoli had other goalscoring chances but with less success possibilities. But thanks to the smart movement of Jaimes to protect the ball and oblige Grimshaw to commit a foul on her at the edge of the box, Napoli found their equalising goal. It was a well-oriented free-kick converted by Toniolo using her left foot and curling the ball towards the bottom left angle, preventing Milan from getting the three desired points and stealing a very precious point from them. Such goals can only give confidence to Napoli’s players to give them additional motivation to win points in the upcoming games. 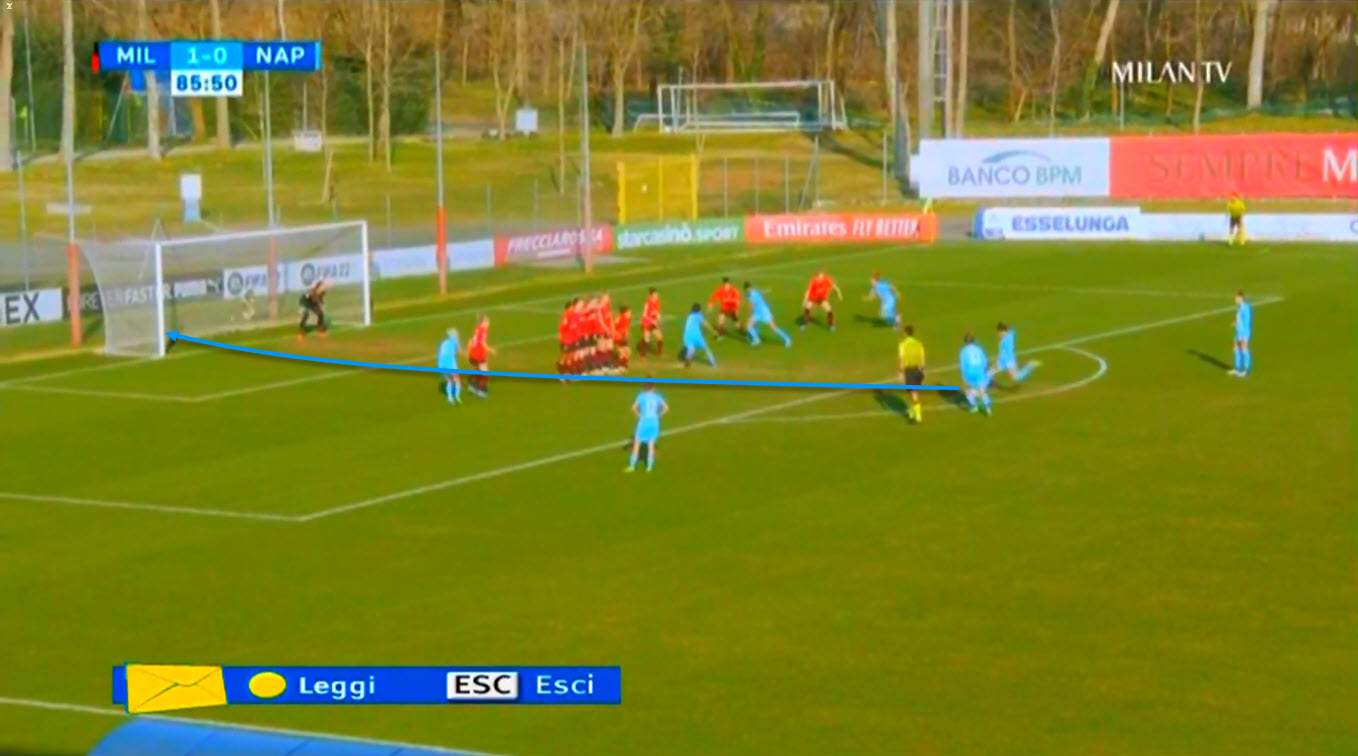 But at the same time, it obliges Milan to ask a lot of questions on the management of the game especially when having the advantage. Also, defensive and attacking decision-making as well as the finishing need to be addressed as soon as possible if they want to continue challenging for the second spot.

Milan will now need to concentrate on their upcoming matches given that they will be going through a complicated period of tough games, beginning with the first leg of Coppa Italia’s semi-final before going to face Roma and then playing against Fiorentina and Empoli. This will most probably be the last chance for Milan to bridge the gap with their direct opponents this season and therefore they will have to collect the largest number of points out of these next few matches.

For Napoli however, the calendar will not be much easier since they will have to face Juventus on March 19 before facing Sampdoria and Lazio, one of their direct opponents in the battle for “survival” in Serie A.