Jonathan Burkardt scout report 2021/22: A look into one of Germany’s rising stars

Jonathan Burkardt is a 21-year-old German striker who applies his trade with Mainz in the Bundesliga, he has also been capped x times for the German Under 21 team. The youngster has grabbed people’s attention this year with his goal tally of 5 in the Bundesliga, in addition, he has also scored 3 goals in this season DFB Pokal, Germany’s domestic cup competition. So far this season Burkardt is amongst the goals for both club and country and is becoming one of the most dangerous attackers in the Bundesliga. This season has been somewhat of a breakout season for him with him only managing two goals in 29 appearances last season.

This tactical analysis and scout report will look to unpick some of the tactical and technical aspects of Burkardt’s game and explain why this season he has managed to be so dangerous.

Burkardt is a versatile attacker which can be supported by looking at his heat map below, however, his main position is as a striker, 57% of the time Burkardt plays through the middle. He can drift wide and left and play as an inside forward but does mainly play through the middle. This season within Mainz’s tactics he has featured as part of an attacking two with Onisiwo on the right and Burkardt on the left. They have formed a deadly partnership with Burkardt’s five goals and Onisiwo capturing four assists. 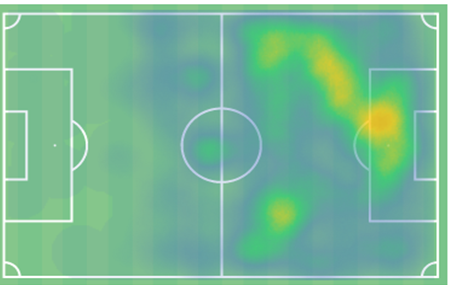 So far this season Burkardt has managed 8 goals and 3 assists in all coemption for Mainz in addition to his 3 goals for Germany under 21s. This is an impressive haul especially when it is compared to some of the other top names in the Bundesliga as shown in the below graph. As you can see Burkardt is amongst some of the top attackers in the league, except for Erling Haaland and Robert Lewandowski who have been lights out this season for Borussia Dortmund and Bayern Munich. He has even managed to outperform some of the leagues best attackers including the likes of Thomas Muller and Lukas Nmecha. 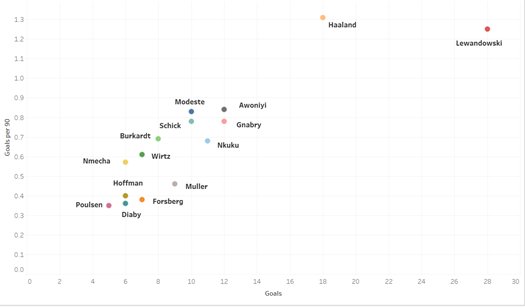 This provokes us to look at his expected goals numbers and see if his goal-scoring is luck or something he can continue for the rest of the season. The below graph it shows both expected goals and expected goals per 90. Burkardt is again amongst some of the top attackers in the Bundesliga with XG per 90 of 0.54 and a total XG of 6.46. Burkardt is managing to outperform his XG currently however this isn’t too much of a concern as it isn’t a significant amount and there is time for this to change over the course of a season.  In addition, Burkardt has the highest XG per 90 apart from Haaland and Lewandowski (which is no shame) amongst the top attackers in the Bundesliga. The data has helped us understand that in fact, Brukardt’s goal scoring form isn’t luck but down to his good play getting him into the goal-scoring positions. 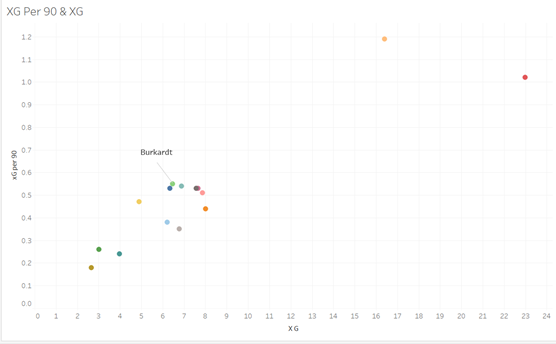 Burkardt has managed to score two headed goals this season with Mainz and despite being only 5’11 he possesses a real aerial threat. This partnered with clever runs and movements to ensure he has the best chance of scoring. The below example is one of his headed goals this season against Augsburg. Owiniso has got the ball in the right channel and is looking to make a cross or pass to find his striker partner. Burkardt is initially going to run on the inside of the Augsburg defender however he is going to change direction and run behind the defender, for two reasons one it makes it harder for the defender to know where he is, secondly it will allow Burkardt to attack the cross better as he can get better contact with the ball.

As the play progresses you can now see that Burkardt Is now behind the defender and making a run toward the back post where Owiniso is going to hang the ball, the importance of Burkardt being behind the defender is shown below as it highlights the Augsburg defenders vision he is looking forward and had no idea where Burkardt is.

As the ball arrives at the back post Burkardt manages to get up above his defender and has two options with his header he can go to both the keepers left and right. He decides to go to the keepers right and power the ball into the back of the net.

Ability to find space in the box

When conducting a tactical analysis of Jonathan Burkardt his ability to find and create room in the box can’t be ignored. He has a great knack for finding little pockets of space which he uses to get shots off and score goals. This is something all great strikers have the ability to do. The below example is from a German under 21s game against San Marino. As you imagine as an inferior nation San Marino have got a compact defensive bank of five and are looking to minimise the space for the German attackers, Burkardt is highlighted at the top of the screen.

As the ball carrier carries the ball to the by-line he is looking to get across off, Burkardt holds his run and allows the defenders to keep running deep and this creates a little pocket of space for him. As highlighted below. He then has the ability to get a shot off or in this case, take a touch then get a shot off.

Burkardt has a touch and calmly places the ball in the top corner to give Germany a 3-0 lead.

This isn’t a one-off for Burkardt the following example shows him doing a similar thing in the Bundesliga against Hoffenheim, Mainz has the ball on the right-hand side and the Mainz fullback is looking to make an overlapping run into the space highlighted. On the edge of the box, Burkardt and Owiniso are 2 v 2 against two defenders.

As the ball is about to be crossed Burkardt runs in and then drops off the defenders to keep running deeper to create a pocket of space in which he uses to get a shot off. As shown below. Being able to quickly stop at the right moment makes this so effective, just as the ball is going to be played as this means the defender is fully focused on the ball.

Burkardt has a touch and gets a shot off but the Hoffenheim defender manages to get a block in and prevent a goal for Mainz. Having the ability to take this shot on his first touch is something he needs to add to his game and work on if he going to keep developing. Most goals are scored the first time and having a touch usually allows defenders to make a challenge or block, especially at the top level. If he can add the first-time finish to the run and movement then Burkardt is going to be a force to reckon with.

A key component of an attacker’s game is their hold up play, holding the ball up is an underappreciated aspect of modern attacking play and is critical to a successful striker. Holding the ball up allows the team to progress up the field and provides the team with a focal point to play off. It can bring runners and other attackers into play allowing for greater attacking opportunities. Below we will show the example of Burkardt’s attacking play one good and one showing why he needs to improve this area. The first example is against Augsburg, the ball is played into Burkardt’s feet, he uses his body brilliantly to shield the defender and keep hold of the ball.

After controlling the. ball, Burkardt uses his body to continue shielding the defender and plays a well-weighted ball to the advancing Mainz Player who arrives onto the ball and gives Mainz their second goal of the day.

This is a great example of hold up play however the following is not, five minutes into the game the ball is played into Burkardt who has dropped into his own half to get on the ball. He has tried receiving the ball on his back foot and opening himself out in the same move as shown below.

This is brave as if it pays off it’s an impressive flashy piece of play however this is probably the wrong place to try it. Burkardt’s touch evades him and the Monchengladbach defender manages to poke the ball away from him into one of his attackers. In the process, it takes several Mainz players out of the game and gives Monchengladbach the ball in a dangerous area, something he will have to work on if he is going to progress as a player.

Hopefully, this tactical analysis has provided an understanding of Jonathan Burkardt’s game and some of his key attributes. If he continues this run of form I am sure Hansi Flick will be looking to give him his senior debut in the coming months and he will be attracting attention from some of Germany’s biggest clubs However Burkardt must continue to develop his game and look to improve on the areas mentioned in this analysis.