The Philadelphia Union enjoyed a solid campaign in the MLS last year and had a great run in the MLS is Back tournament. Not only does the Union field a competitive first-team, but they also have one of the best academy setups in the country. Due to the salary cap that MLS teams face, the Union turns to their academy to provide the talent they need to compete. First team manager Jim Curtin has done a fantastic job getting the most of experienced players and academy graduates.

One of these academy standouts is Brenden Aaronson. The 19-year-old is in his second season in the league and is quickly becoming one of the youngest talents to look out for. His performances have made him a regular with the Union, and clubs from across the pond are beginning to take notice as well.

In this tactical analysis in the form of a scout report, we will look at Aaronson’s qualities and the tactics that make him a regular for his club side, and why clubs in Europe are taking notice.

Curtin usually favours the 4-3-1-2 formation for Philadelphia. The Union play a high pressing defensive style and are incredibly balanced going forwards. Aaronson has played as the attacking midfielder in the midfield diamond, supporting the two forwards. 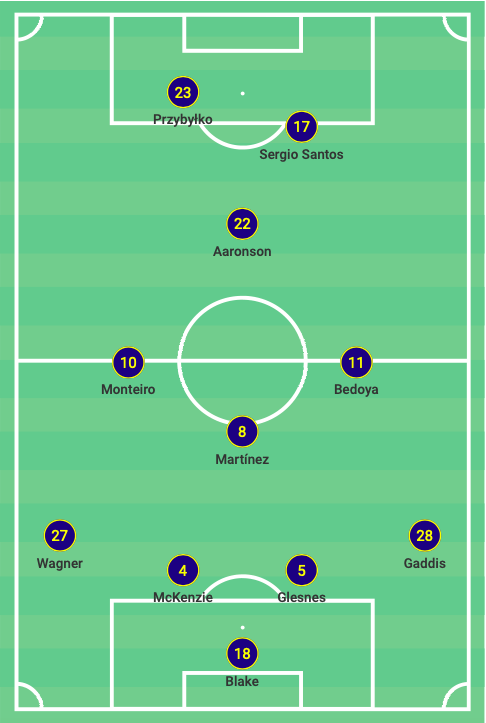 When Curtin tactically adjusts the formation to add another attacking player, Aaronson is asked to play on the left as a winger. 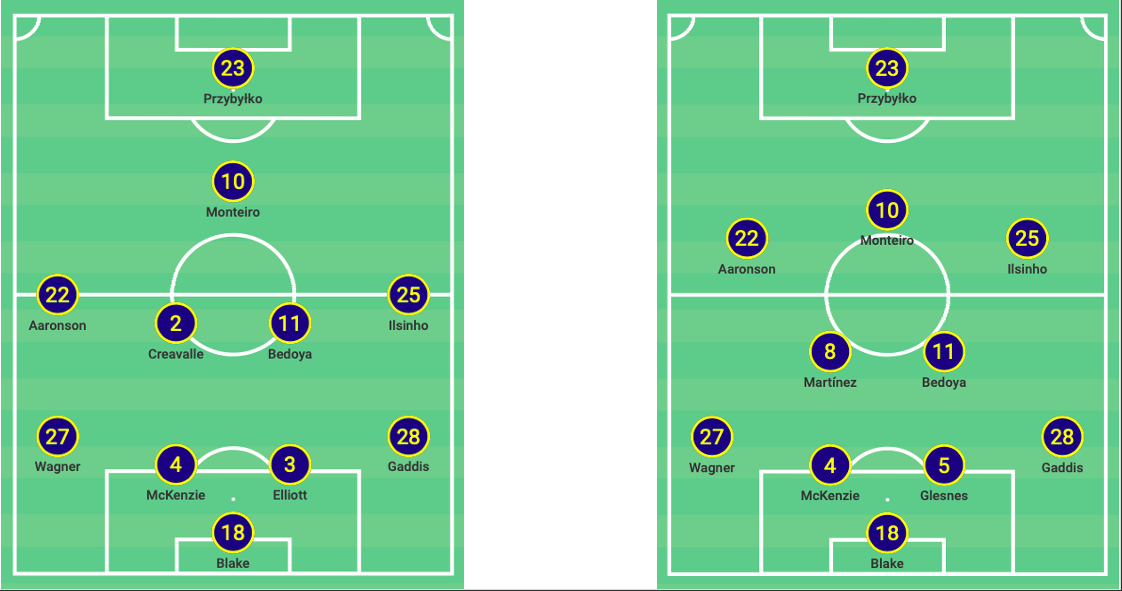 Seeing the different formations that the Union used, we can see Aaronson’s tactical versatility.

Being the top of the diamond gives the New Jersey native freedom to wreak havoc offensively. His biggest strength going forwards is his vision and movement. Aaronson combines these two abilities with raw pace and agility to create scoring opportunities.

Since he is in his second season with the Union, Aaronson is getting more comfortable with adding to the attack. In the 2019 season, the young American took 17 shots with 7 of those being on target. He was also able to tally 3 goals from those shots on target. So far this season he has already taken 6 shots in 5 games, scoring 1 goal in the process.

Most of his goals have come near the top of the penalty area. His role as a support to the two forwards means that he will arrive into the box late. Since both forwards are taking the defenders attention, Aaronson can arrive into space unmarked. 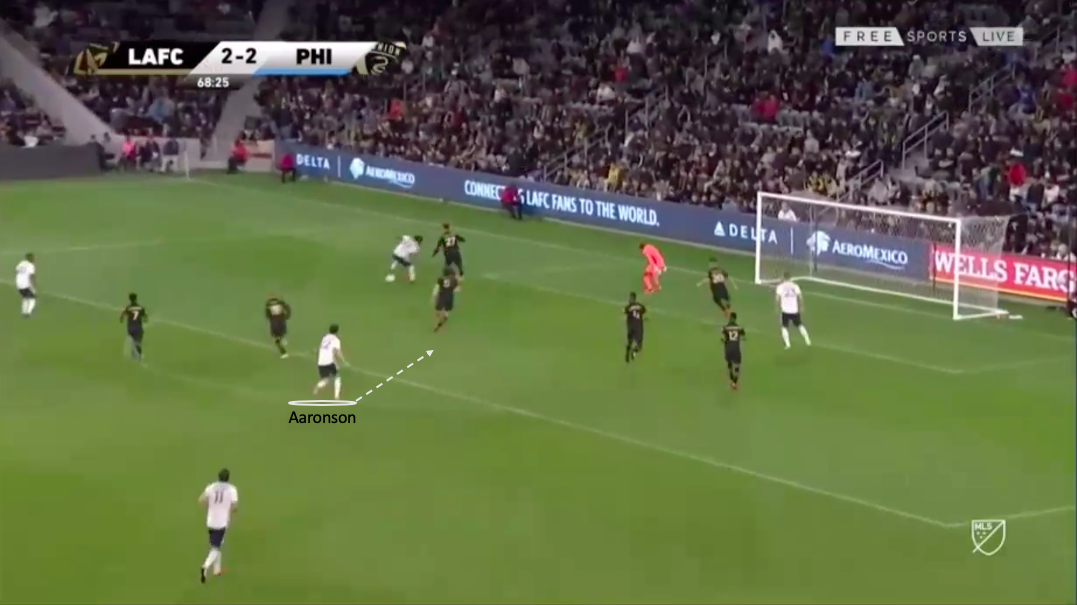 This is illustrated perfectly with his goal against LAFC in March. While the defenders are moving towards the ball and beginning to mark both forwards, Aaronson arrives unmarked at the top of the box. Completely aware of his position, we see he is asking for the ball. 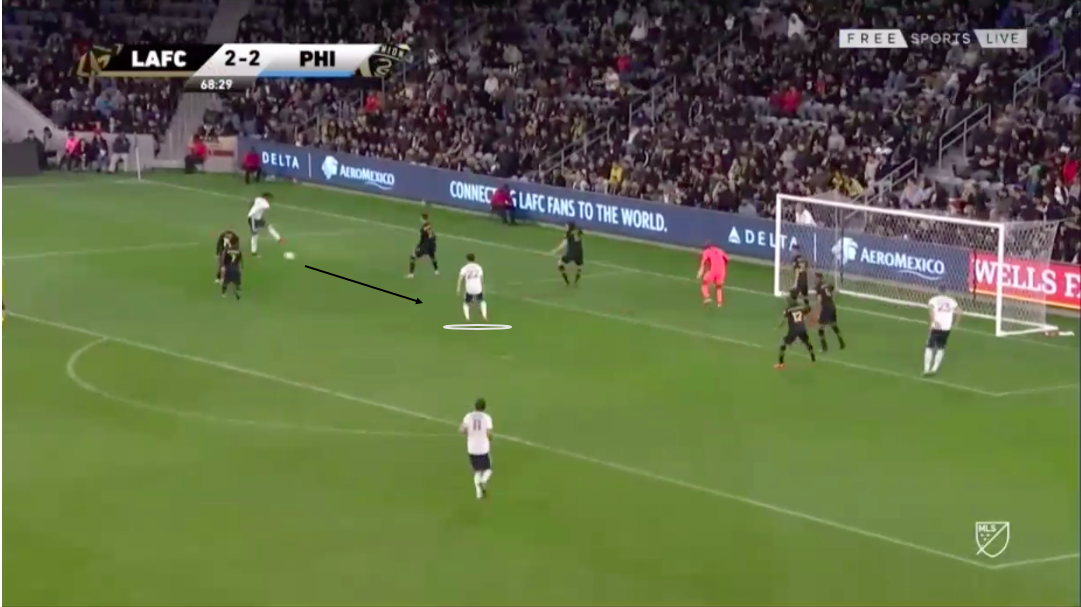 Once the forward is able to connect the pass to Aaronson, the young American is in a pocket of space in front of the goal. The midfielder is then able to control the ball and put the Union ahead. 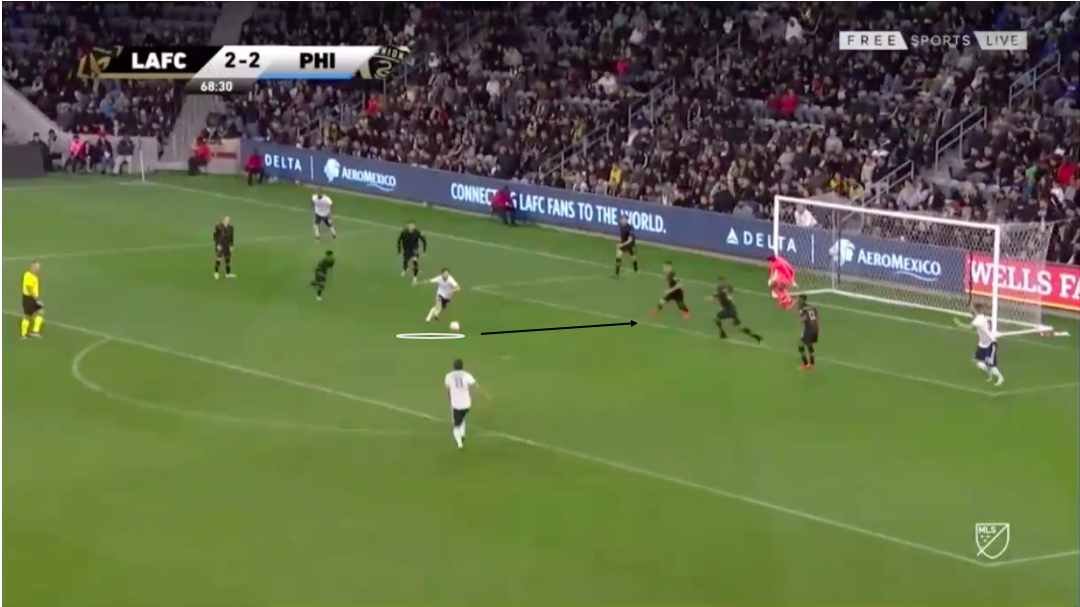 Passing and lots of movement

Due to the narrow characteristics of the 4-3-1-2, the midfielders are asked to put in a lot of work. Looking at Aaronson’s heat map we can clearly see the youngsters range across the field. 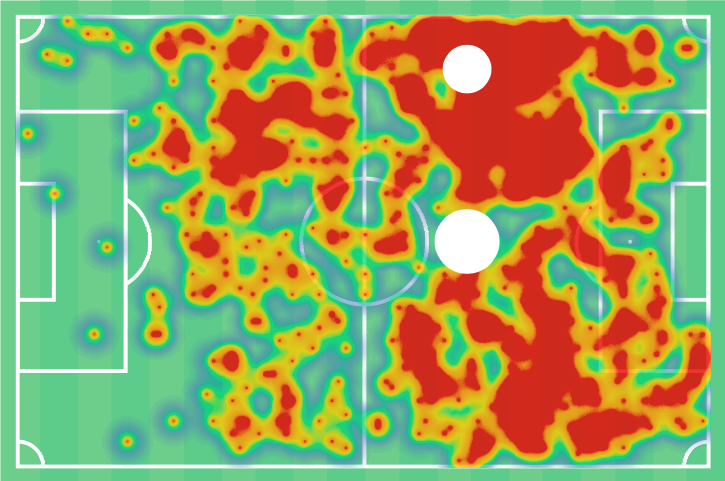 Watching Aaronson play, one can tell he is a very energetic player. His movement off of the ball is exactly what the Union need for their style of play to be successful.

His passing game is crucial to how Philadelphia executes its attack. Last year Aaronson averaged 28 passes per game, and he rarely missed the mark with a 79% accuracy rate. Looking at an analysis of his passing in key areas, we see a more detailed look at the young American’s accuracy. 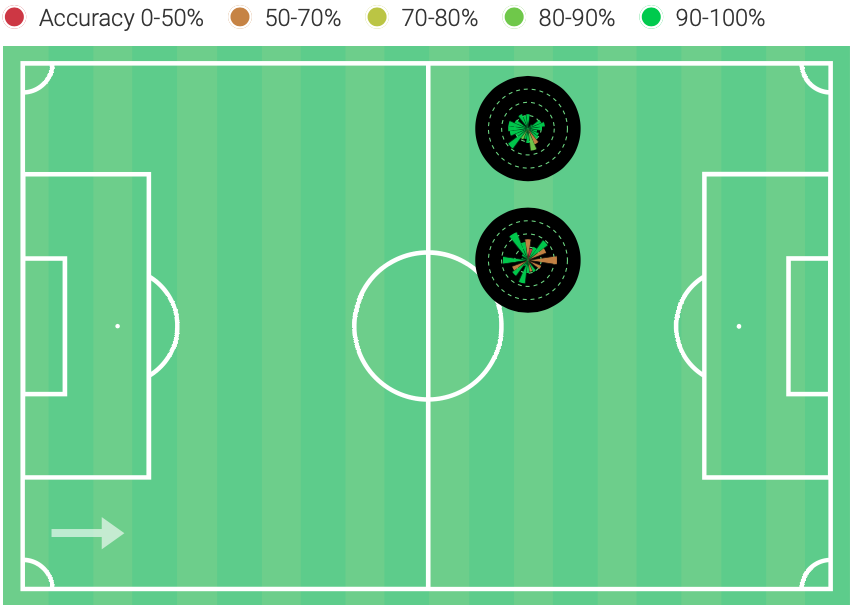 Aaronson is also excellent with his long-range passing. He attempted 7 passes longer than 30 yards and was able to connect every single one.

Analyzing the following examples from Philadelphia’s recent match against Inter Miami, we are able to see Aaronson’s passing in action. In the first example, we see the young midfielder receiving the ball between the lines. 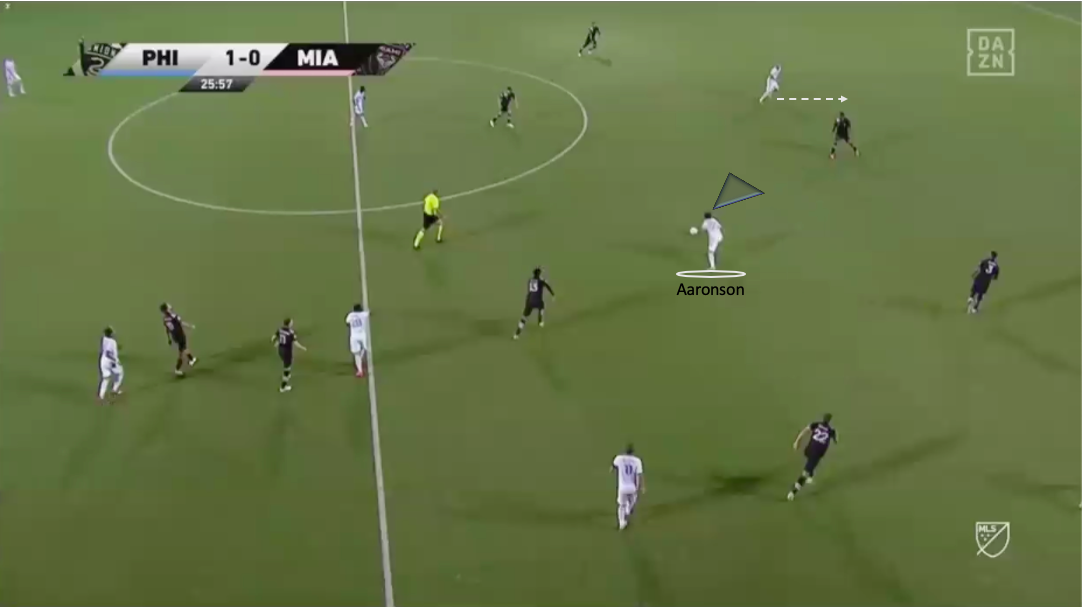 With a few touches, he is able to play an inch-perfect pass and create a scoring opportunity for Sergio Santos. 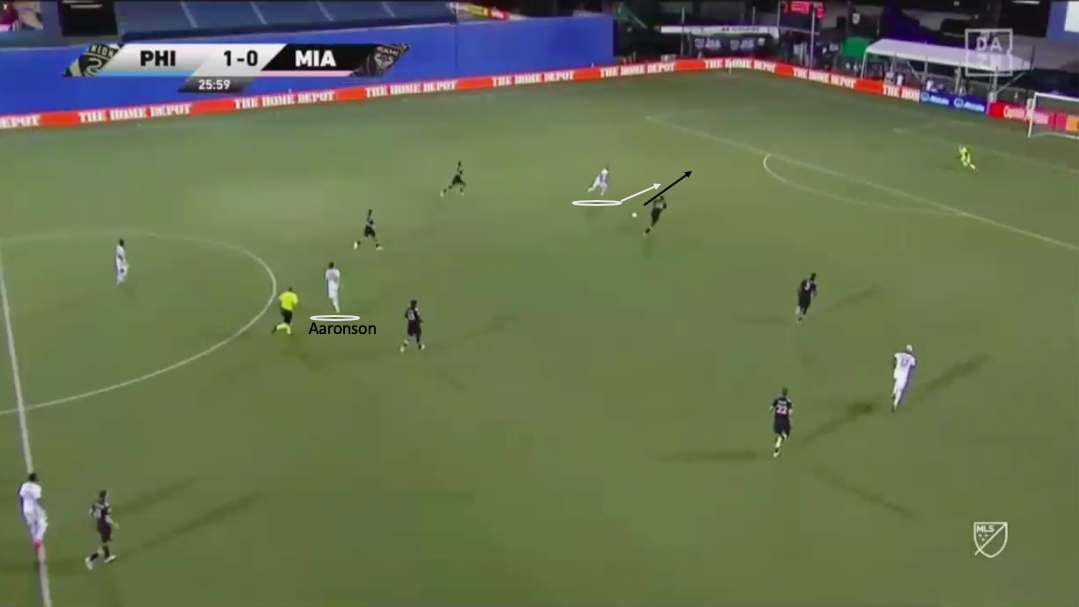 The following example showcases Aaronson’s pace and ability to play a through ball as he is sprinting. Following a defensive clearance, the midfielder is leading a 3 v 1 counter-attack with Santos and Przybylko. 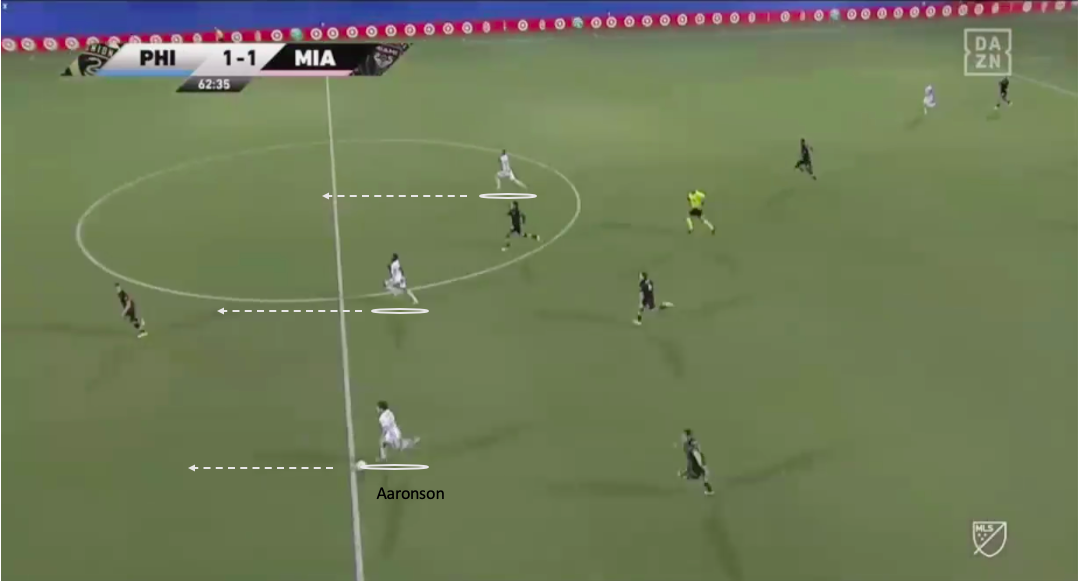 As the defenders begin to close him down, he plays the ball across to Przybylko. While Santos does aid the pass with a successful dummy, Aaronson’s patience and vision at speed are to be noted. 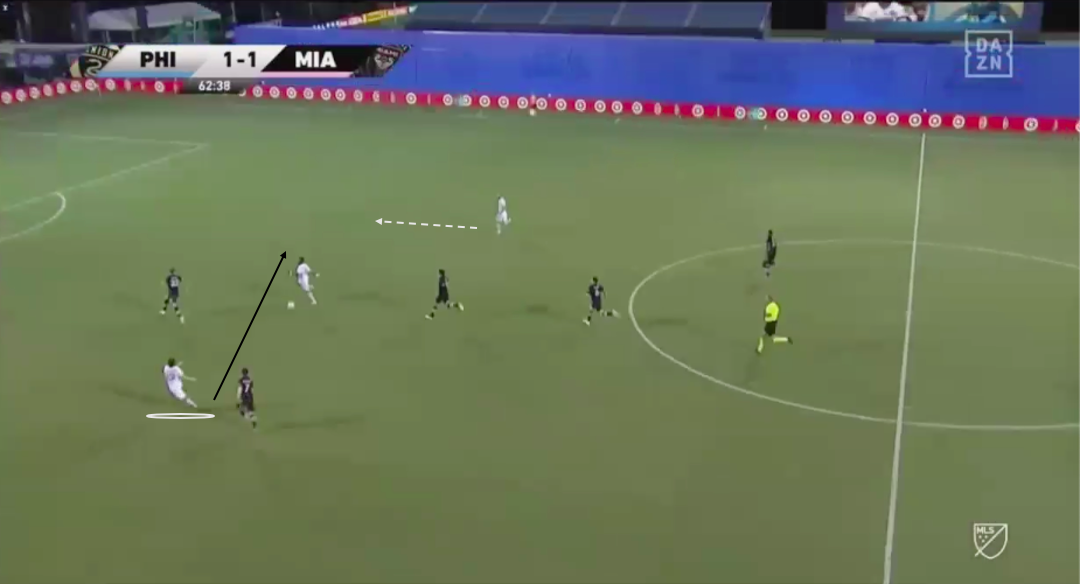 The Union midfielder is also starting to add more assists to his repertoire. Last season in the MLS he only had 1 assist, and this year he already has 2. Continuing to sharpen his passing in the final third will only aid in his development as a well-rounded midfielder.

As was the case with his shooting, Aaronson is getting more comfortable carrying the ball as well. During the 2019 season, he attempted a total of 54 dribbles, successfully keeping possession 36 times. In the five games he has played in 2020, he has attempted 24 dribbles while keeping possession 15 times. Amongst the Union field players, he has the highest amount of attempted and successful dribbles. These numbers clearly show that his development is trending upwards.

Aaronson’s principal attacking strength is dribbling into space while attracting defenders, before releasing the ball with a well-timed pass. This is best seen during a counter-attack, as seen in the previous section with his assist against Miami. In the match against LAFC, we have an example of Aaronson eliminating multiple defenders using his full skill set. 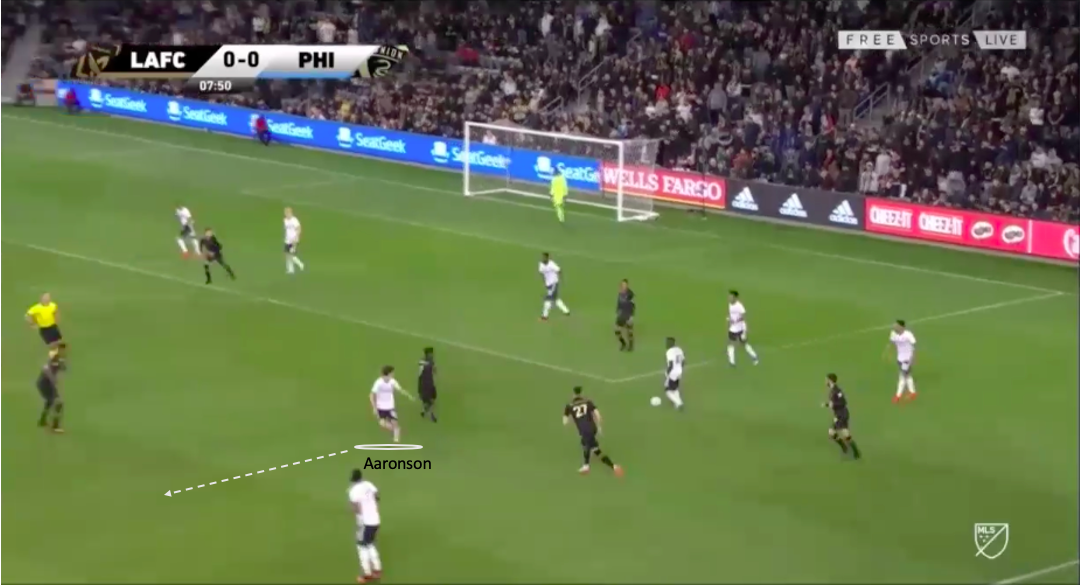 We see the young midfielder moving to be the outlet pass for Monteiro. Once the Union have escaped LAFC’s press, Aaronson puts his foot on the gas and charges into the open space. As the opposing outside back begins to close him down at an angle, Aaronson plays a quality through ball for forward Przybylko to run on to. 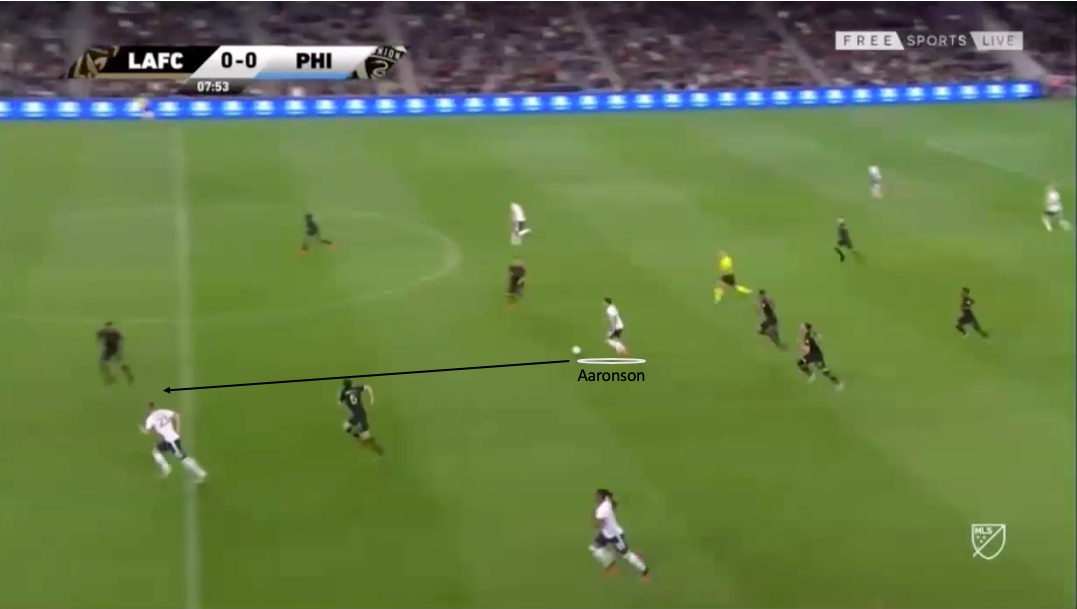 Aaronson’s attacking intelligence combined with his abilities are key for the Union in transition and in possession. The next section of the scout report we will look at his defensive contributions in the final third.

One of Philadelphia’s tactical strengths is their intense defensive style and Aaronson’s boundless energy is a perfect fit. Upon losing the ball, the Union’s young midfielder is one of the first on the scene. Averaging 4.16 recoveries per game in his first season, Aaronson is already on his way to eclipsing his first season numbers. He has also doubled his interceptions, picking off 16 passes this season.

Philadelphia’s narrow shape tends to help them regain possession through a quick counter-press. In the final third, Aaronson is one of the first players to react in transition. Of his 47 total recoveries last season, 31 those came through counter-pressing. 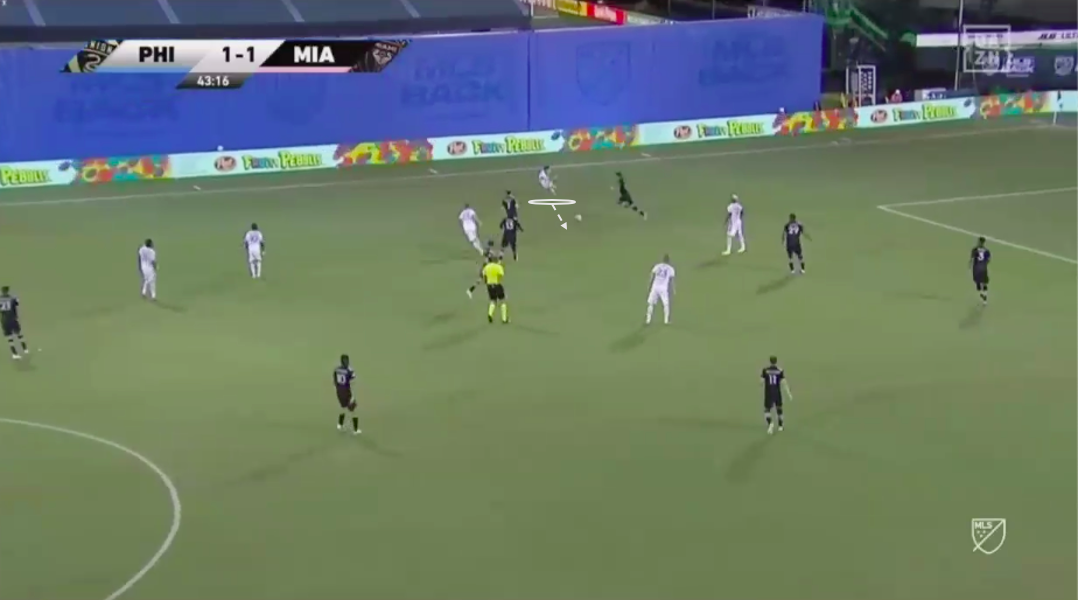 Using the recent match against Inter Miami, we have a perfect example of Aaronson’s tenacity in the counter-press. Following a misplaced pass Jamiro Monteiro, Aaronson is already moving towards the Inter Miami player before the ball arrives. 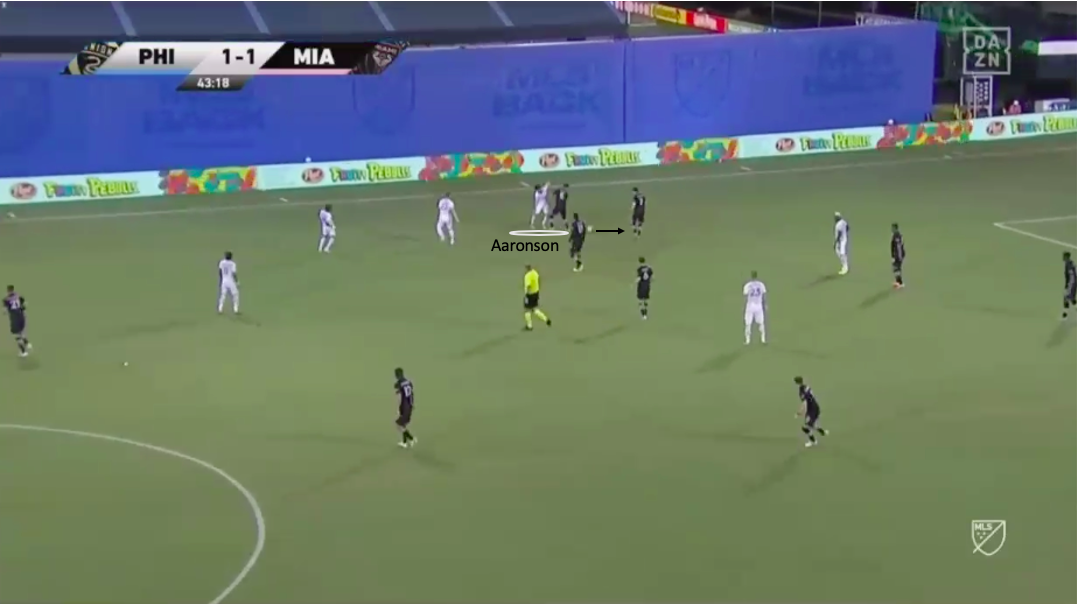 The young American is able to slow down the opponent, forcing him to pass to a teammate that is close by. Aaronson is then able to pressure the next Miami player. 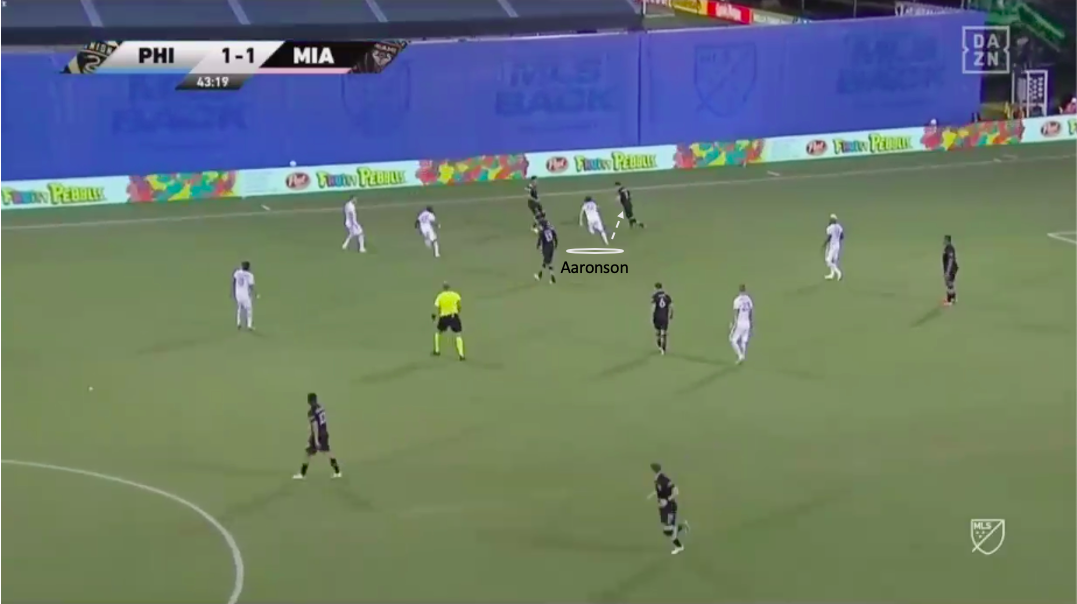 He then intelligently forces the new ball carrier into the wide area. This allows the Miami player to only play a long ball down the line. The long pass attempt then sails out and Philadelphia are able to regain possession.

It is clear that Brenden Aaronson is in an environment that has given him the opportunity to flourish. The young American has taken the opportunity and run with it. Blending the combination of energetic attacking play with tenacious defending, Aaronson is a well-rounded midfielder with an incredibly high ceiling. There is no doubt why he is being linked with Celtic and a host of Bundesliga sides. He will also most likely continue to be included in the US National Team in the future, earning caps as his career progresses.