1,110. That is the number of games Premier League giant Manchester Utd has included academy players featuring within the first-team squad in a competitive fixture. The significance of Manchester Utd’s academy dates back to the Busby Babes in the 40s and 50s. In more recent memory, the class of 92 included some of the best players produced in Britain, such as Ryan Giggs, David Beckham and Paul Scholes. The youth academy system has certainly served Utd well over the years, and this production of talent continues to be prominent within today’s football landscape within the red side of Manchester. The likes of Marcus Rashford, Jesse Lingard and Paul Pogba are established stars, all birthed from the training pitches of Carrington, and a new generation of emerging stars are working their way up the Utd ladder, creating a possibility to play alongside the players just mentioned.

Names such as Anthony Elanga, Hannibal Mejbri and Tahiti Chong (on loan in the EFL Championship), are all players known throughout the mainstream. One player that may have slipped through the crack is Alejandro Garnacho, an Argentinian winger currently apart from Utd’s U23 set-up, who is playing a massive part in his team’s UEFA Youth League and Youth FA Cup success. Garnacho has excited coaches in and around the football with the leap Garnacho was taking season since his arrival from Atletico Madrid, but no one expected him to receive his first call-up for Argentina’s senior team, featuring PSG’s Lionel Messi. Garnacho possesses a substantial amount of talent and is on course to transition into the first team; only time will tell if the Argentina call-up came too early for the soon to be 18-year-old, but with his assertive personality on the pitch Garnacho will certainly give his all.

In this tactical analysis and scout report, I will look into flexibility and comfortability in various attacking positions. In addition, I will discuss Alejandro’s shot profile and conclude with the winger’s weaknesses.

As mentioned previously, Alejandro Garnacho is a versatile player who is capable of playing on either flank. Throughout the game, the Argentina international may drift positions and position slightly centrally and receive within the half-spaces. Garnacho is capable of using both feet to his advantage, which allows him to comfortably play on both sides with good effect. From his heat map, we can see the predominately plays down the left-hand side for Man United but picks up the ball in a variety of areas down the side. 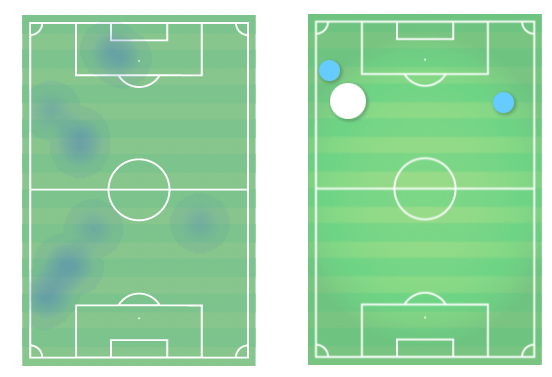 Adaptability in the final third

Alejandro Garnacho can drop deeper and can function within these spaces, but the winger truly comes alive when operating within the final third. What gives him an edge over his opposing defenders is his unpredictability, in reference to the variation within his game, together with his determination and forcefulness on the ball. When observing Garnacho receiving in a technical sense, he ticks quite a few boxes, as he makes good use of his first touch to disrupt the opposition defender’s balance. In addition, the Utd forward can receive in a plethora of ways; on the back-foot, with different parts of his feet, and he may incorporate his head from time to time. Furthermore, Garanacho also shows variation within his receiving in a positional sense. The wide forward is equally able to receive the ball hugging the touchline in wide positions, as well as, placing himself within the half-spaces. 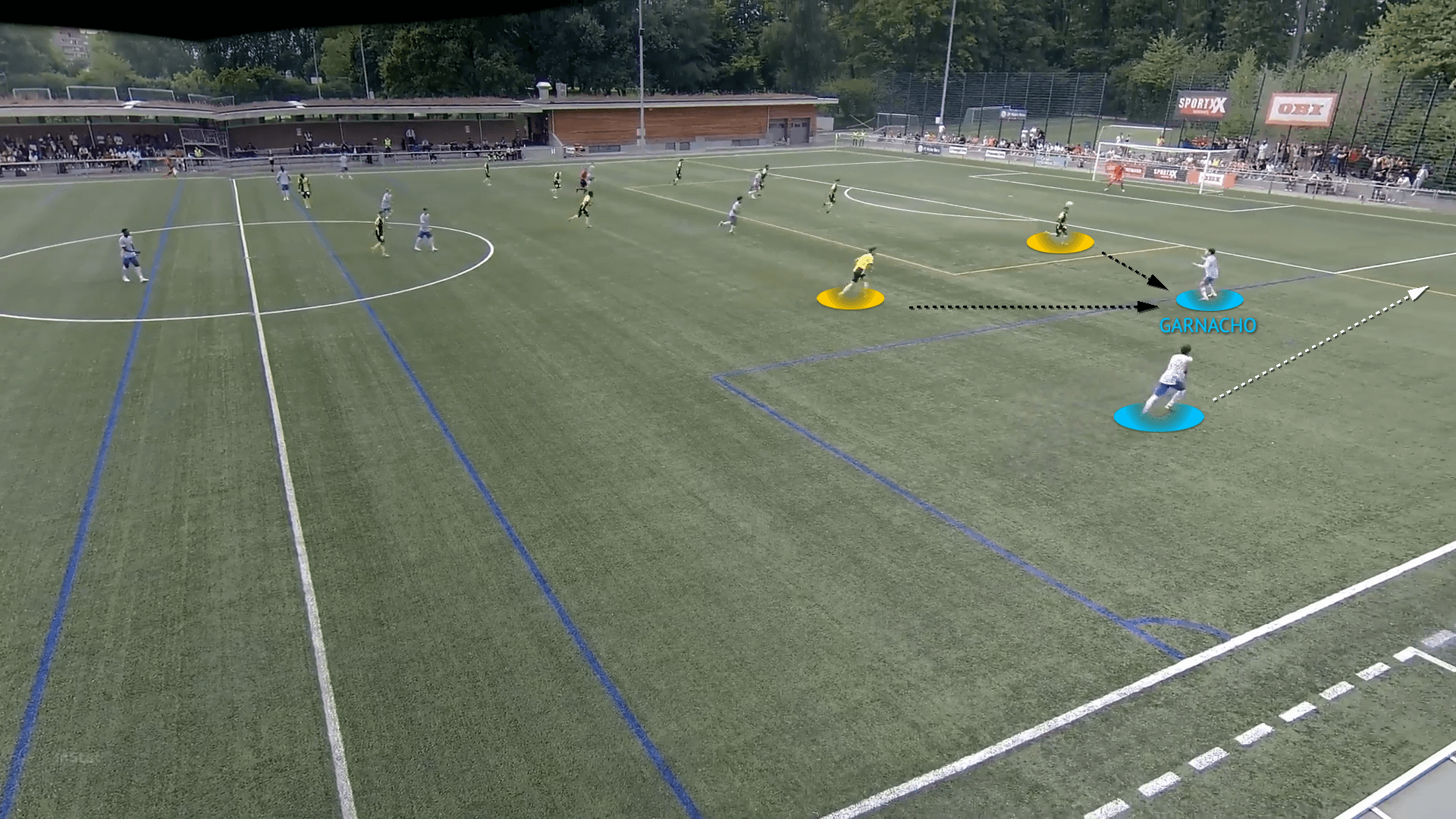 Receiving from the half-spaceThis flexibility is quite useful for his team, as he can carousel and combine with others, constantly creating rotations with his full-back just behind him and central midfielder on his side. From these constant interchanges, Garnacho has created a good relationship with Zidane Iqbal.

Whether playing on the left or right side, the 17-year-old has a huge tendency to cut inside and ghost past defenders and create a passing or shooting opportunity. While enjoying this form of attack, running at full pelt; Garnacho does showcase good link play, as he can execute good one-two combinations with players near, allowing him to sprint into the box in behind. During these kinds of actions, we can observe his assertiveness and eagerness to drive into the box. 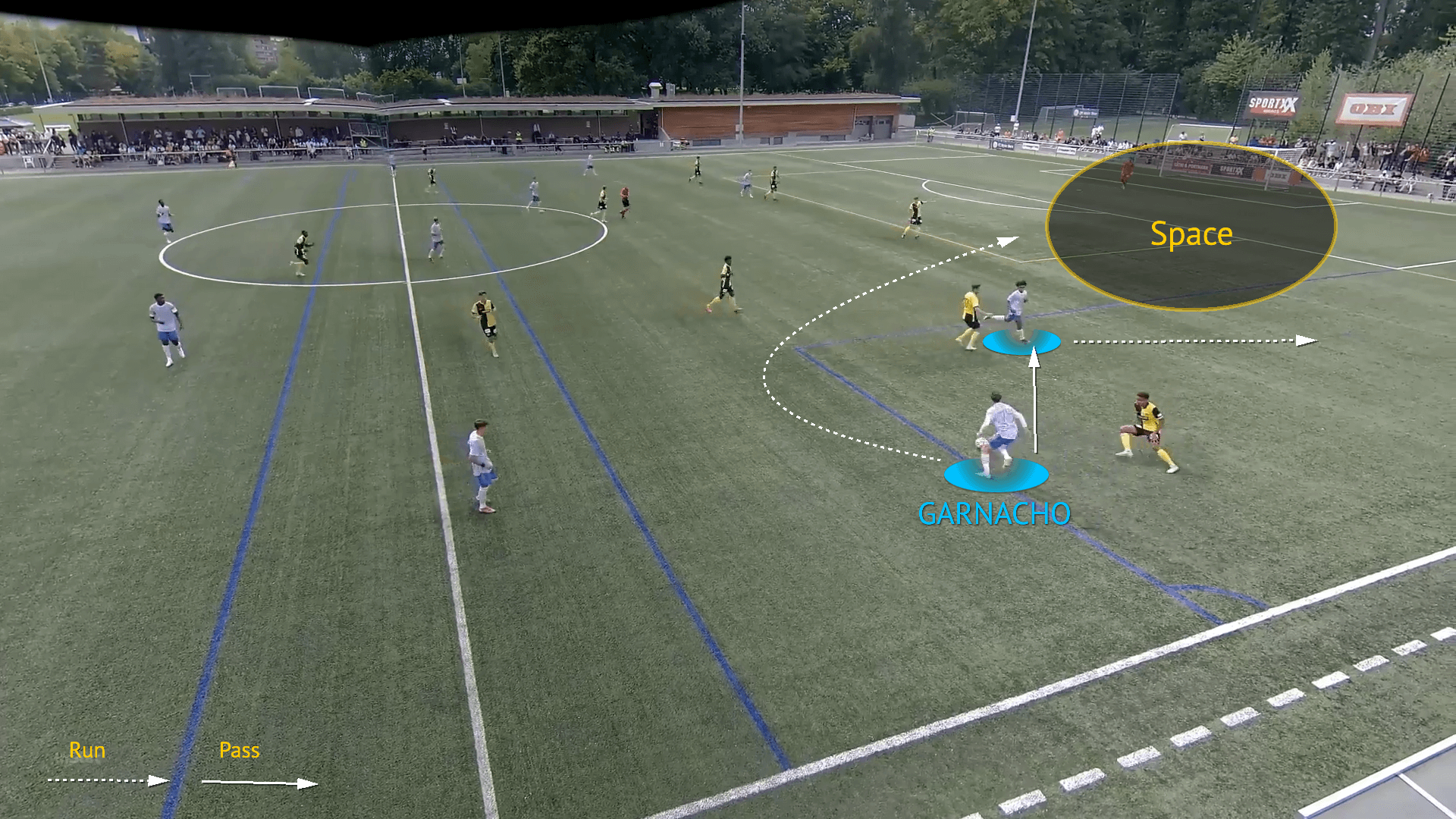 It is important to highlight Garnacho is direct and likes to play at a high tempo, which presents positives and negatives. His high octane style can be quite useful, as he can single-handedly create attacks within a blink of an eye from various areas of the pitch. Simultaneously, some decisions can be reckless, and not well-thought-out, resulting in a loss of possession when that could have been prevented. Using his swift body movements and time dribbling, Garnacho is proficient during 1v1 sequences; match this technical dexterity and ability to drive in any direction, the Argentine has a lot of string to his attacking bow.

Garnacho displays an interesting shot profile primarily because of his over ball running and the actions that proceed to him shooting. When in possession, he excels when creating shots off the dribble from wide areas. As noted, the winger likes to dart up-field and quickly shift and cut inside, looking for a shooting chance. When in these types of positions, Garnacho displays good ball-striking ability, using both his left and right foot. In regards to shot type, the Argentinian can hit the ball low and hard into the front post, but has a tendency to sweetly place the ball into the top corner with a curled finish.

While Garnacho’s shot-creating for himself is quite promising at his young age, his off-ball movement and understanding of space are what truly enhances his attacking game. The wide man is fairly quick and can catch onto a ball played behind the opposition defence. When Garnacho is involved in these kinds of instances, he displays two factors; the first being his good physical ability. The second is his intelligence when making the run—on a regular basis, Garnacho times his run to perfection with his wonderful first touch, keeping the ball within his stride.

Alejandro Garnacho shines when he works the space to his advantage, but also has a special instinct to allow the space to work for him. In more detail, the forward likes to buzz around and find pockets within the box, but periodically, he will simply stand still, allowing the opposition defensive line to push forward, and in doing so creating a few yards of space for him to take advantage. In addition, when no space is afforded to him, he will simply create it.

When evaluating Alejandro Garnacho appropriately, we must consider his youth and inexperience. Regardless of the young man’s international call-up to Argentina’s senior side for World Cup qualifiers, he is yet to play a single match for Manchester Utd senior side, as he does present slight issues to his game, which many hope eventually departs from his game as he matures. Through we considered all of Garnacho’s strengths, with a large majority of them on the ball from an attacking viewpoint. Upon observation, the Argentinian’s biggest weakness is his pressing; for all his vigour and enthusiasm, trying to reclaim the ball during opposition build-up, comes poor pressing technique. The failure of his technique lies from his angle together with the speed at which he completes these actions. His movements in this regard can be considered quite fanatical, which can lead to him getting bypassed when they should be calm and measured. 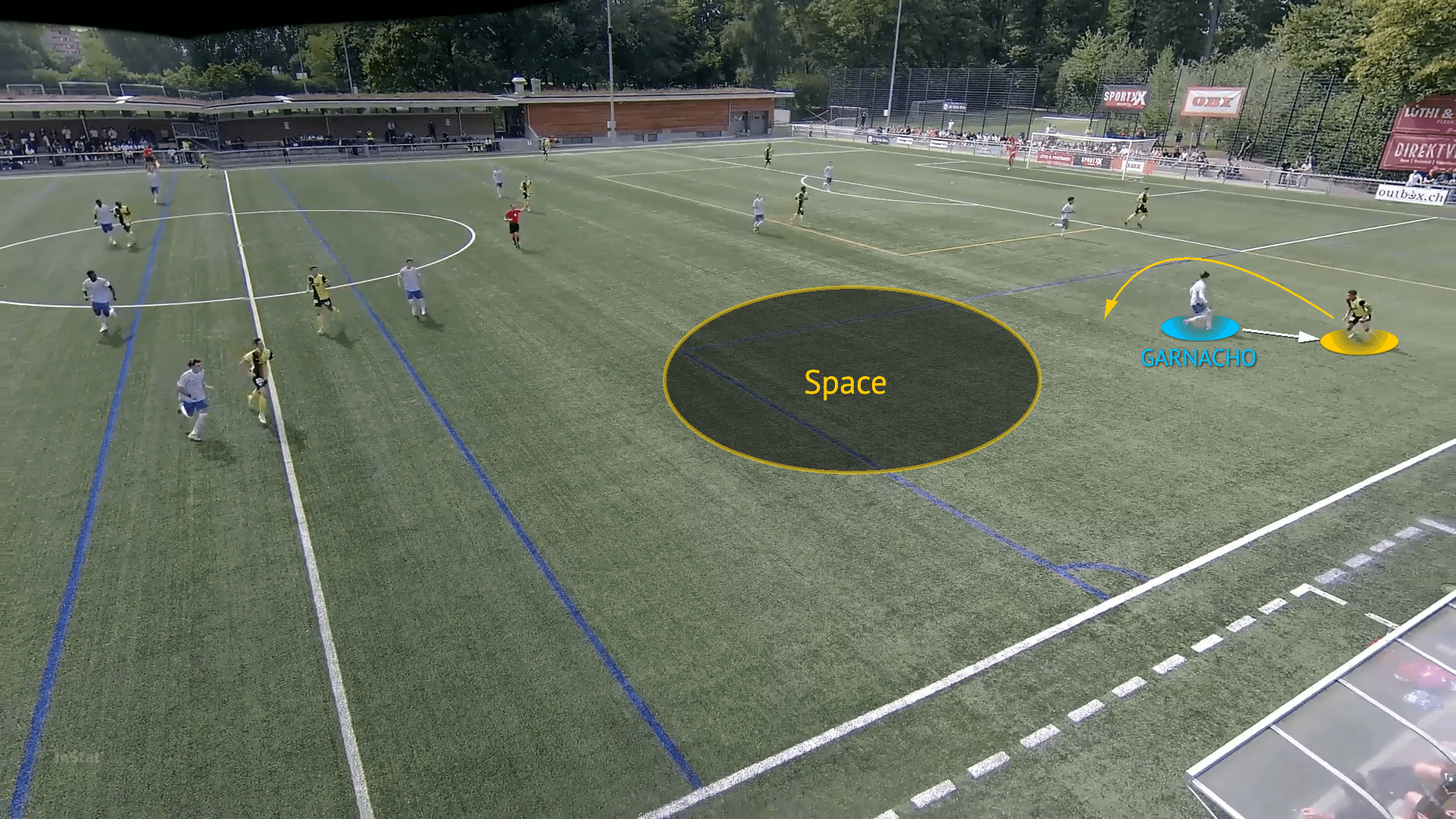 The only on-ball problem which is distinguished is his over-dribbling. Moments have occurred when the young winger will have a simple pass available and presents itself as the optimal option, but Garnish will reject and proceed to dribble and possibly lose possession of the ball.

Manchester Utd’s academy has served them well, with names that have cultivated footballing generations, and this conveyer belt of talent does not seem to be slowing down anytime soon. Anthony Elanga is the newest academy product to reach the first team, but the young Argentina Alejandro could be next in line after just receiving his first call-up for Argentina. The young winger is exciting and is in a good place regarding his talent development. His high tempo style and tight dribbling make him a difficult customer to stop for opposing defenders and with all his energy comes cleverness, with his off-ball running in behind. With this being said, the yet to turn 18, Garnacho still has some technical issues to iron out, but the minerals of a very good player are ever-present and Argentina have a special talent on their hands.