Hoffenheim came into the match following a four-match winning run. The run has pushed Sebastian Hoeness’s men into Champions League contention, with the club occupying fourth place before the weekend’s fixtures. Hoffenheim do tend to rise to the occasion against Bayern Munich when playing at home. They have won three out of their last five matches against Bayern Munich at the PreZero Arena.

This tactical analysis will focus on the key tactics set by Hoeness and how they helped shape the result and performance from Hoffenheim. 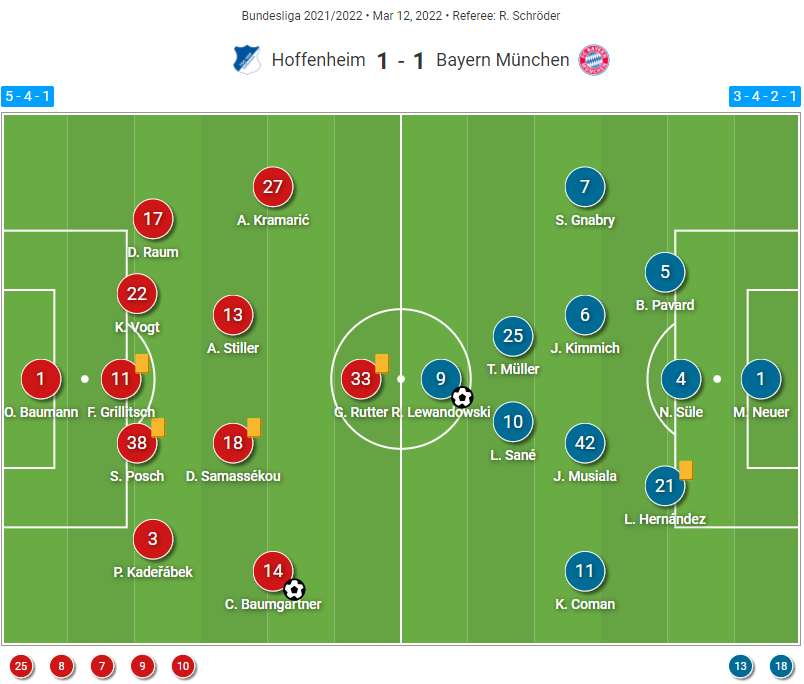 Sebastian Hoeneß set Hoffenheim up in 5-4-1 formation. However the shape switched between a 5-3-2 and 5-2-3 depending on the area of the pitch in which Bayern held possession.

Bayern Munich opted to keep the same starting eleven and formation as they did against RB Salzburg in the Champions League. They set up with a 3-4-2-1 formation with Muller and Sane playing the half winger – number 10 role behind Lewandowski. During the attacking phase, their shape transitioned to a 3-2-5 with Serge Gnabry and Kingsley Coman joining the attacking line.

Hoffenheim’s defensive block changed depending on the area in which Bayern Munich held possession.

As you can see here in this example. Hoeness’s men are pressing with a high block in a 5-2-3 shape cutting off the central areas of the pitch. 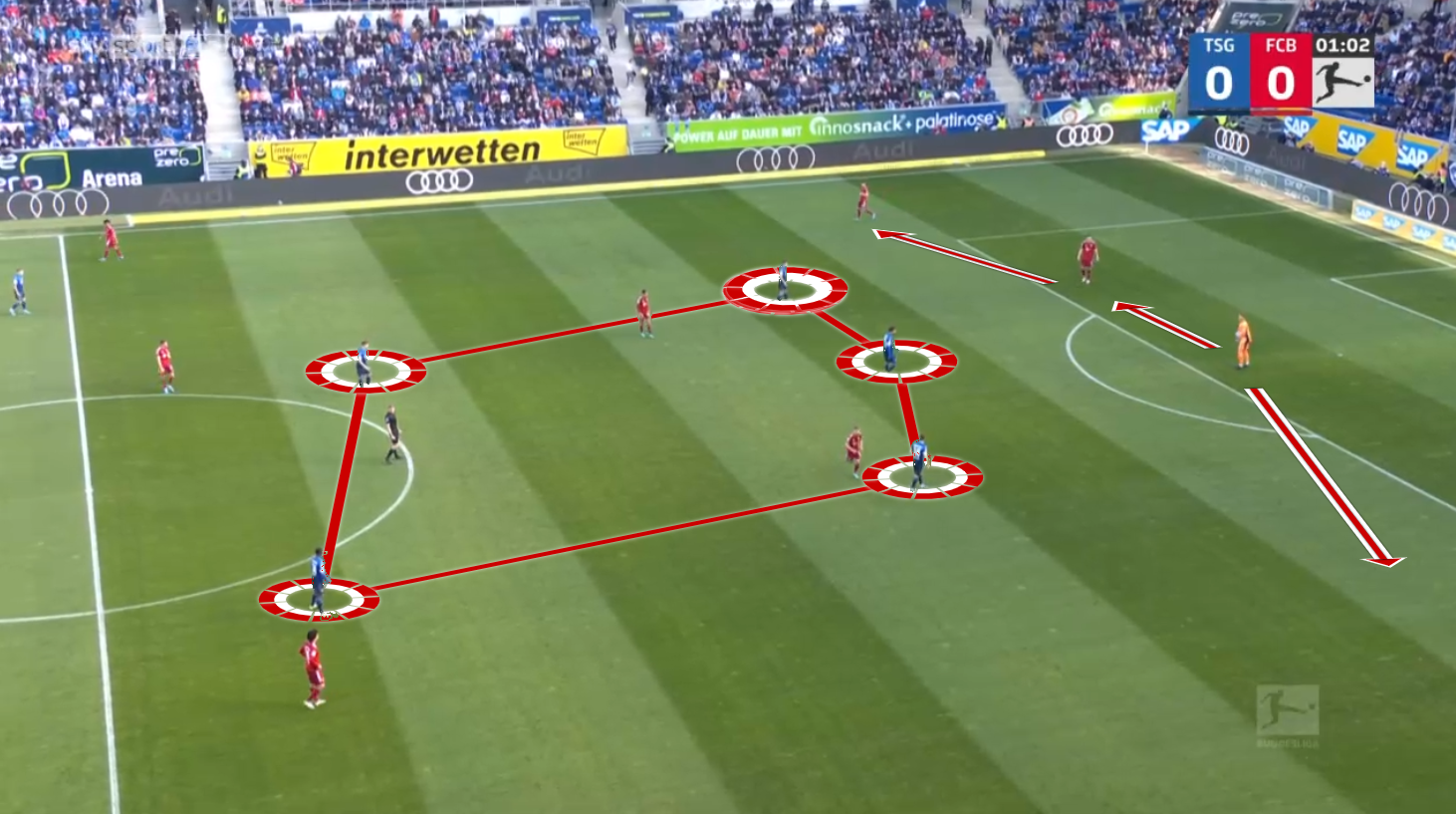 Hoffenheim were happy to allow Bayern to have possession in certain areas of the pitch. Sebastian Hoeness’s game plan was to cut off the central area of the pitch. This would stop Thomas Muller and Leroy Sane from receiving the ball centrally between the defence and midfield. The aim of this tactic was to encourage Muller and Sane to leave the central areas and go looking for the ball.

When this happened, it caused Robert Lewandowski to become isolated against Hoffemheims three centre backs.

This image shows Bayern holding possession in Hoffenheim’s half. Hoffenheim have reverted to their 5-4-1 shape and blocked the passing lanes through the centre. They have compressed the space between the midfield and defence.

The only passing option for Niklas Sule is to his right-hand side and then out wide. 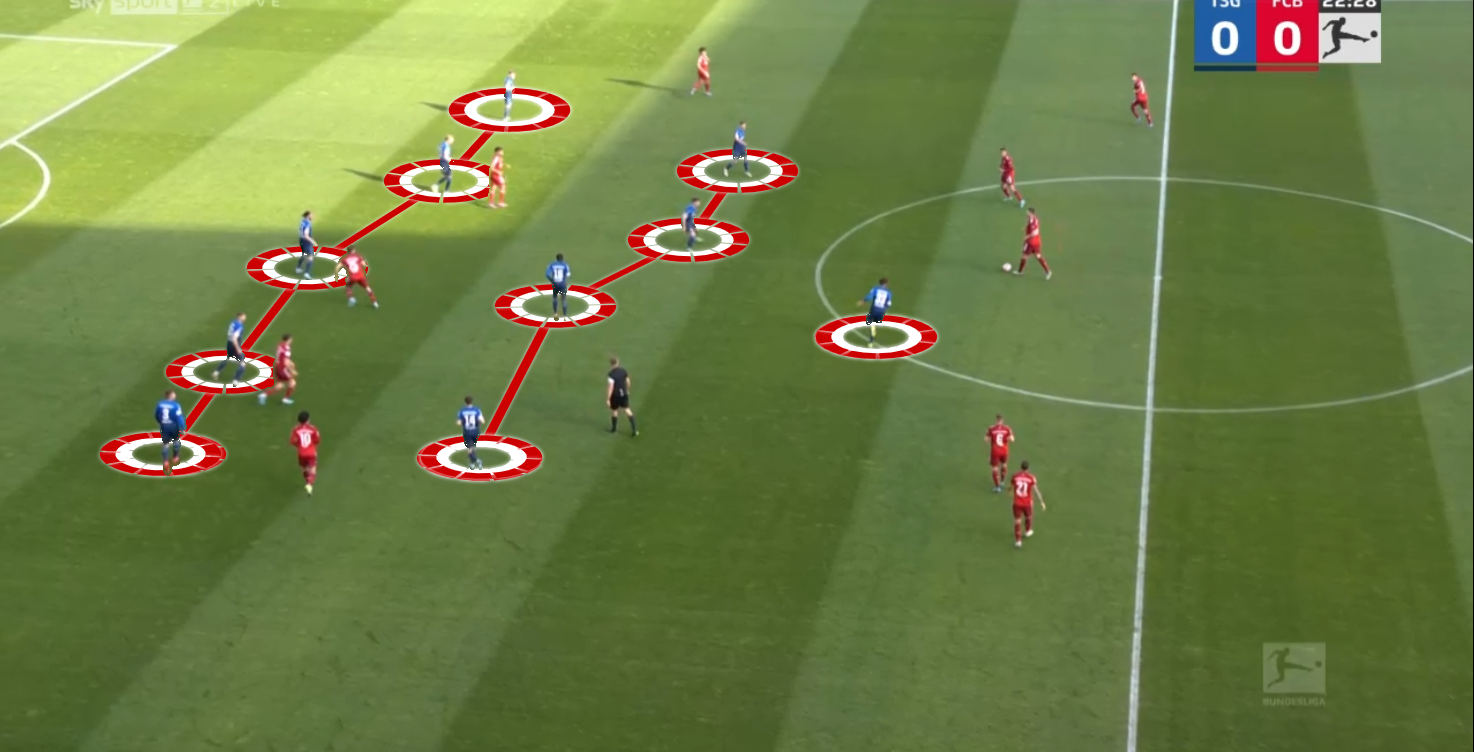 When Hoffenheim pressed, they didn’t press Bayern Munich aggressively. They tended to press individually and zonally. Each player would press the play when the play entered their position on the pitch. Hoffenheim looked to control the space were the ball was being played. Each player would press the space and look to limit the options available to each Bayern Munich player carrying the ball.

During the first half, Hoffenheim were successful with this tactic. Bayern were often forced towards their own goal. Their possession lacked urgency and penetration.

As you can see here Hoffenheim’s midfield are set in their shape but you can see their midfield line is diagonal. This is because of the area of the pitch Benjamin Pavard is carrying the ball in. You can see Kramaric is moving towards Pavard. The other players look to keep their shape and cover the other passing options. 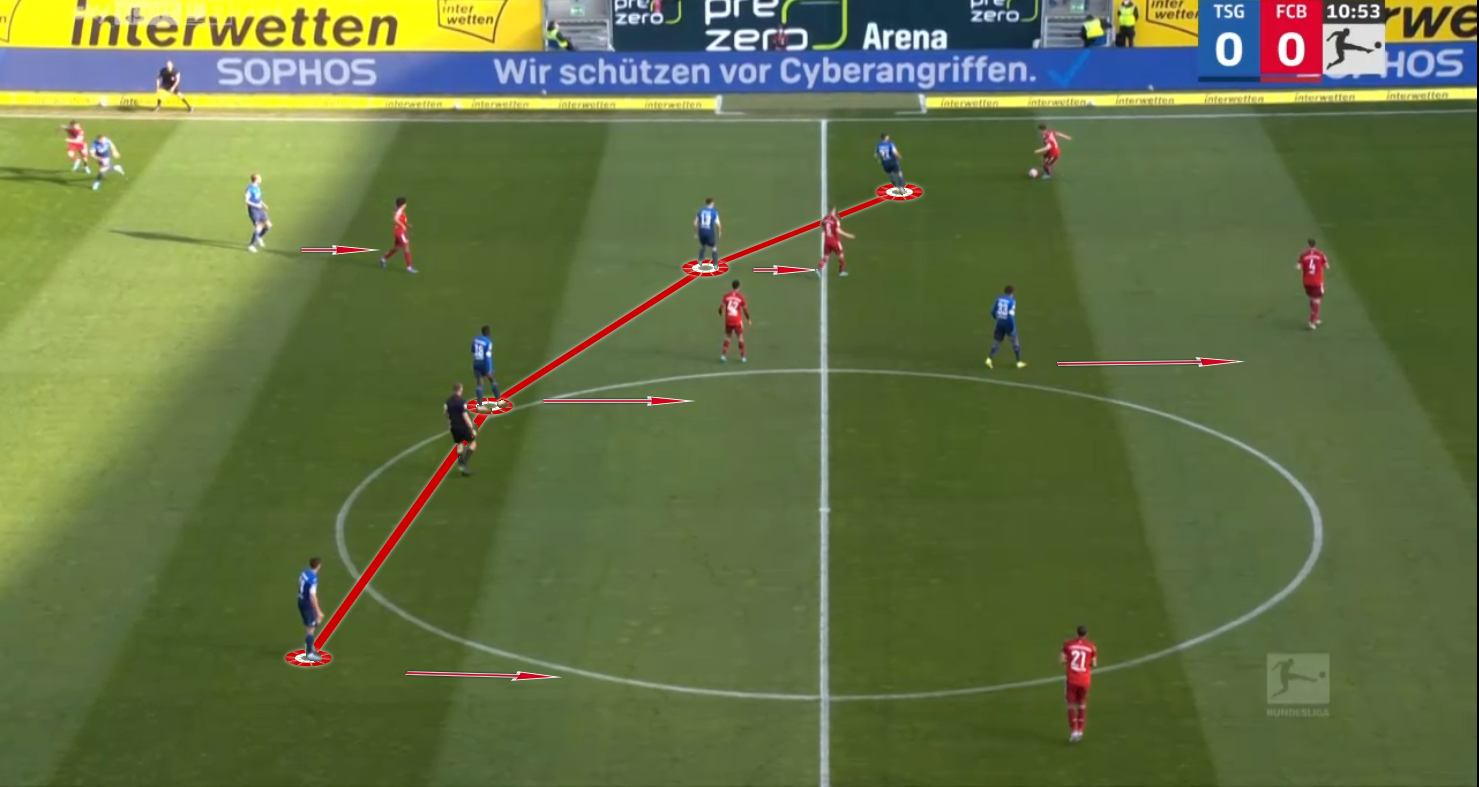 If Pavard wants to keep possession during this passage of play. The only feasible passing option available is inside to Joshua Kimmich. But given the shape of his body, it’s likely he would then pass to Nicklas Sule or back to Pavard.  This is credit to Hoffenheim as they have positioned themselves to stop Bayern playing vertically.

Although Julian Nagelsmann and Bayern Munich may point towards them having the better goal scoring opportunities in this game. Hoffenheim did create a number of opportunities themselves

Last season Sebastian Hoeness’s tactics were focused on fast-paced counter attacks that were triggered at any stage of the game. As soon as Hoffenheim won the ball they would look to counter.

There is a big focus on transition play throughout German football at this moment in time. With coaches now focusing a big part of their tactical plan on winning the game during transition and looking to counter the counter-attack.

Throughout this season Hoeness has adapted to this approach and Hoffenheim’s counterattacks have been triggered using the defensive block and pressing structure shown in this analysis. This game was similar. Hoffenheim’s quick counters were more varied and came from the area were they won the ball.

For the counterattack shown below Hoffenheim won the ball on the right-hand side of their own half for this. As they won the ball Bayern Munich looked to overload that side and counter-press. By not being successful with the counter-press, it presents Hoffenheim a perfect opportunity to counter-attack. Bayern Munich’s shape becomes disjointed, there is plenty of space for Hoffenheim to attack and they have a numerical advantage. 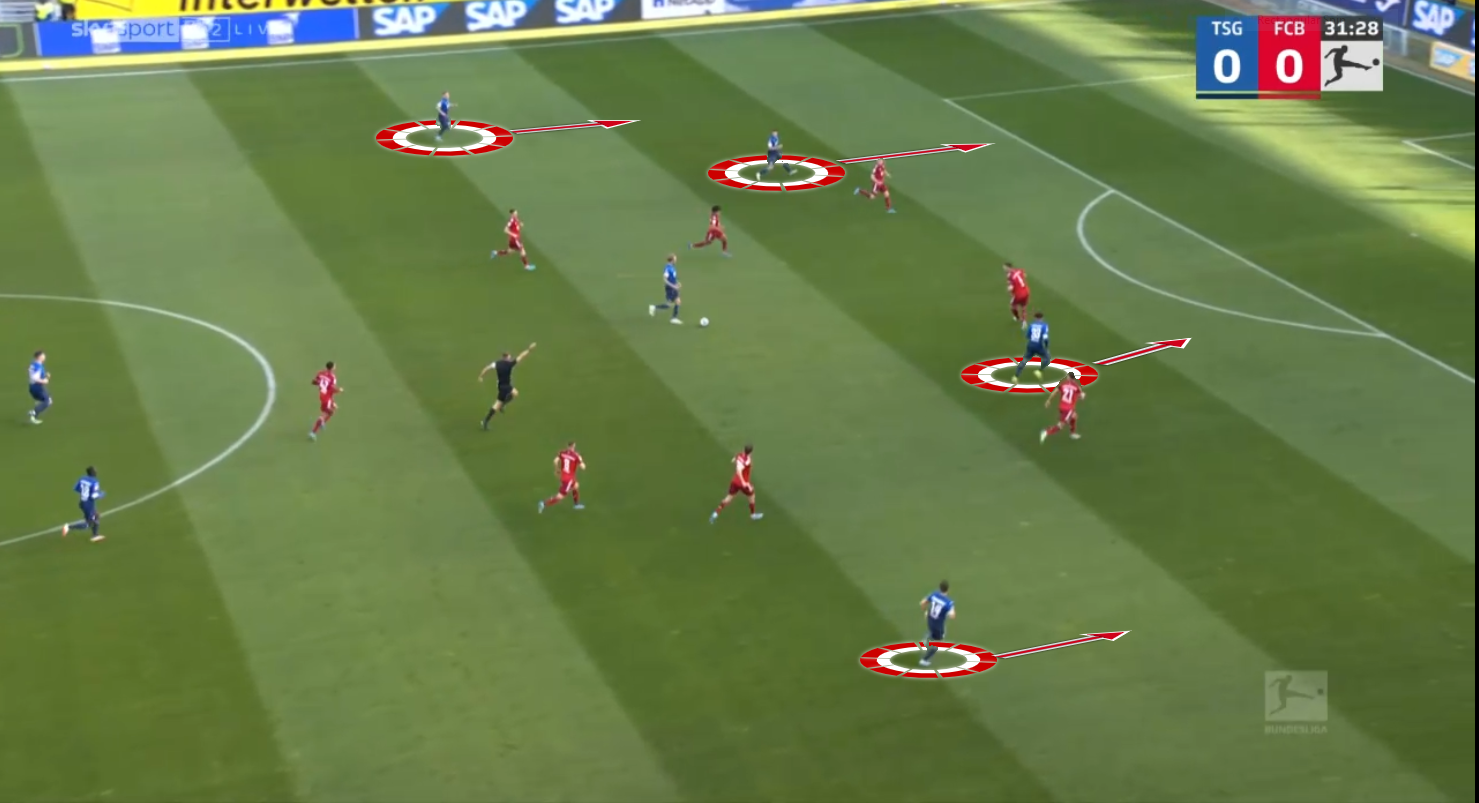 Because of the gulf in class between Bayern Munich and other teams in the Bundesliga. It has become inevitable that they will hold more possession throughout each game. Even more so since Julian Nagelsmann has been the manager. You can put this down to their ability to keep the ball, but also their ability to win the ball back.

During their build-up, Hoffenheim were able to progress the ball through Bayerns press and into their half of the pitch.

They looked to mix up their defensive positioning during the build-up switching between a back three and a back four, with Florian Grillitsch moving from centre back to midfield to make a double pivot. This caused problems for Bayern Munich’s press as you can see in this example.

Florian Grillitsch’s position alongside Diadié Samassékou has pulled Serge Gnabry and Kingsley Coman inside to sit narrow. This is because Hoffenheims double pivot is outnumbering Leroy Sane. Which is the knock-on effect of Thomas Muller moving forward to join Robert Lewandowski, getting ready to press the centre backs.

This helped Hoffenheim progress up the pitch through the wide areas. The goalkeeper plays the ball to the full-backs, and because Serge Gnabry and Kingsley Coman get drawn into pressing them it leaves space beyond them. 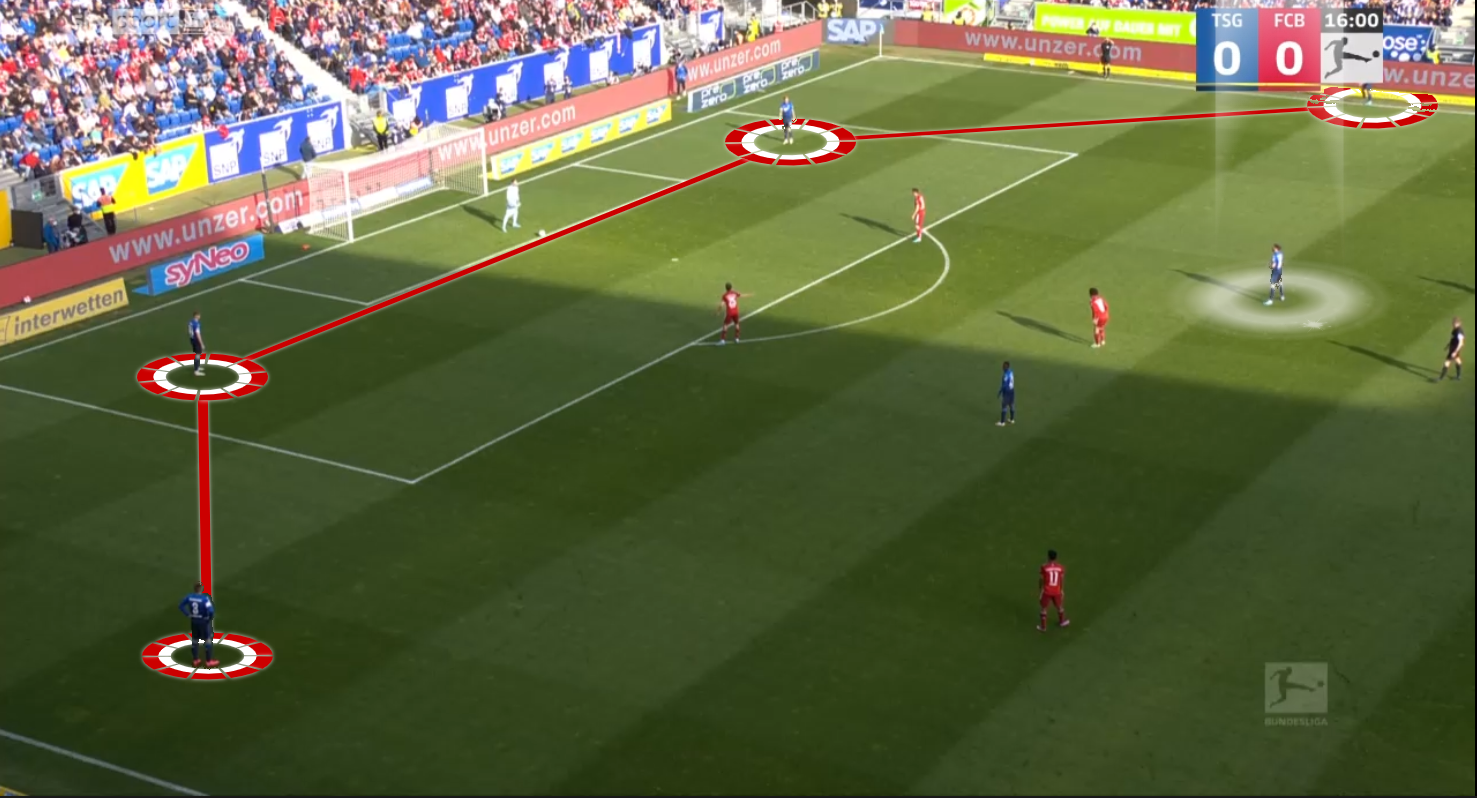 Another build-up approach was the outside centre back pushing up and remaining wide. This provided each player who had the possibility of receiving the ball during the build-up with two passing options. 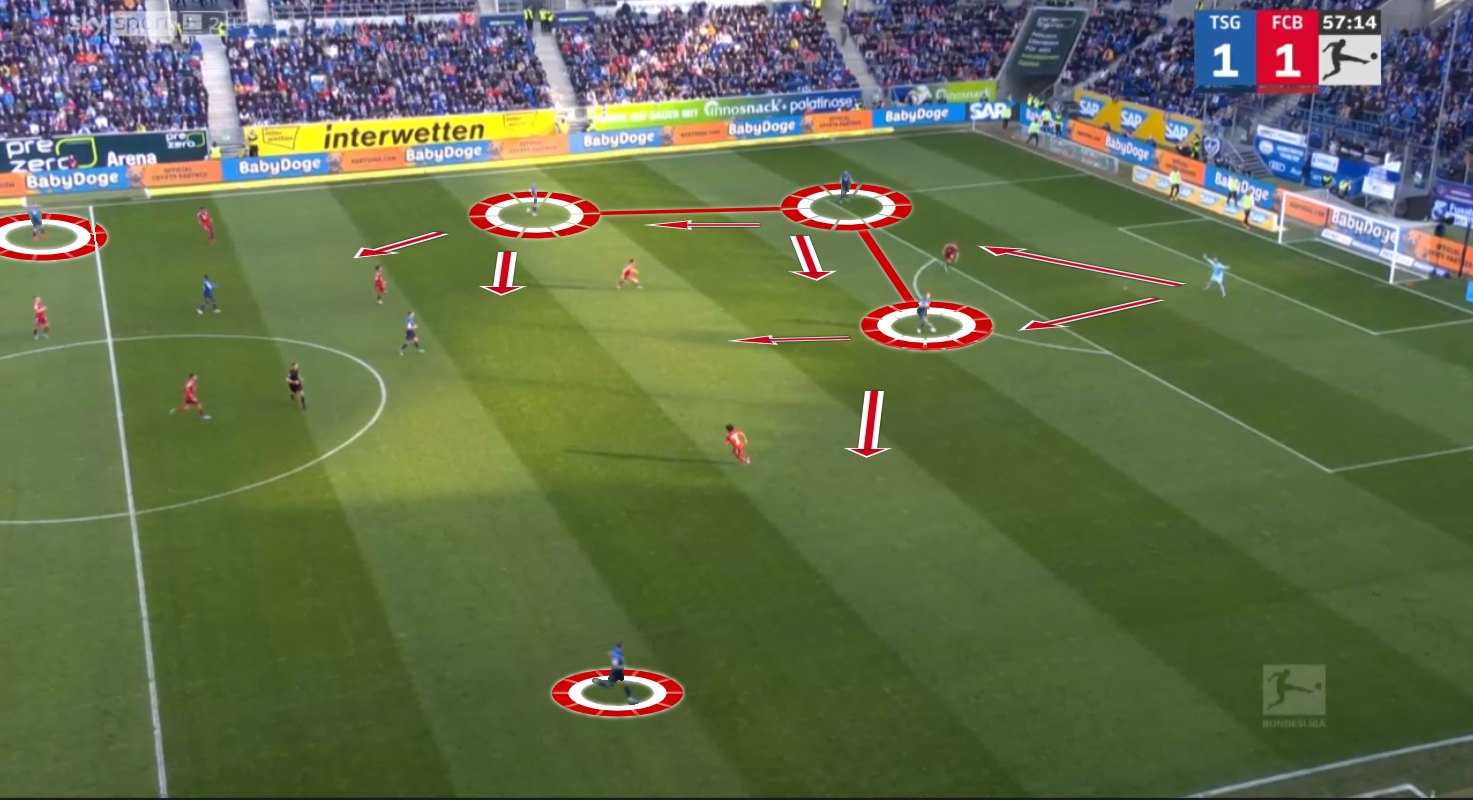 Because they were able to progress the ball through the wide areas and get beyond Bayern Munich’s wingers. When Hoffenheim lost the ball in those areas they had more control over Bayern’s ability to counter as they were able to maintain that defensive structure.

This analysis has shown three key components of Sebastian Hoeness’s tactics and how he implemented them to get a result. Although Bayern Munich did create good goal scoring opportunities, the variation between Hoffenheim’s defensive block and possession play caused problems for Bayern Munich at both ends of the pitch.

Julian Nagelsmann and the Bayern Munich players will point to the chances they created as a way of saying they should have won this match. However, Nagelsmann with will be disappointed with how his team attacked throughout each phase. They allowed the game to become end to end and didn’t assert enough control throughout the game