The 2021-22 Champions League round of 16, especially the 2nd legs, has seen some interesting battles. The game between Manchester United and Atletico Madrid at Old Trafford could follow them in that list.

The first leg already saw Manchester United getting away by snatching a late equalizer to get themselves back into the tie. Atletico Madrid and Simeone would be disappointed about the way in which they conceded after dominating their opponents for the majority of the game.

Although being termed as favourites before the tie, Manchester United displayed very poor performance under their interim manager in the first leg and also are undergoing a very tough run of form that has seen them lose to Manchester City.

This preview in the form of tactical analysis examines both teams’ tactics and how Rangnick and his men need to up their game to qualify for the next round. Let’s begin the analysis.

Ever since he arrived at Manchester United, Ralf Rangnick’s team selection and his approach to the game have also been introspected deeply within the football community. After taking charge he has been focussing on changing the latter, especially without possession. But his team selection has always been under question and scrutinized where the analysts and fans feel there is a sense of inconsistency in his choices.

In his first few games after taking charge, he went with a full-back pairing of Diogo Dalot and Alex Telles to replace the out of form duo of Wan-Bissaka and Luke Shaw respectively. Both Dalot and Telles looked very good, especially the former, in his first few games that saw them slowly nail the starting spots. Shaw eventually won his spot back from Telles but Dalot seemed to be United’s best option at RB with his progressive passing and ability to offer more in attack proving to be valuable for United. But over the past three weeks, Dalot hasn’t started a single game and even missed out on the first leg against Atletico and the Manchester derby.

Especially against Atletico Madrid, it was baffling to see Rangnick go with Victor Lindelof in the RB position in a game where United was given more time on the ball by their opponent. Lindelof looked out of sorts in that role and Rangnick also had to change the formation to accommodate him midway through that game that then saw Sancho play as a wing-back. 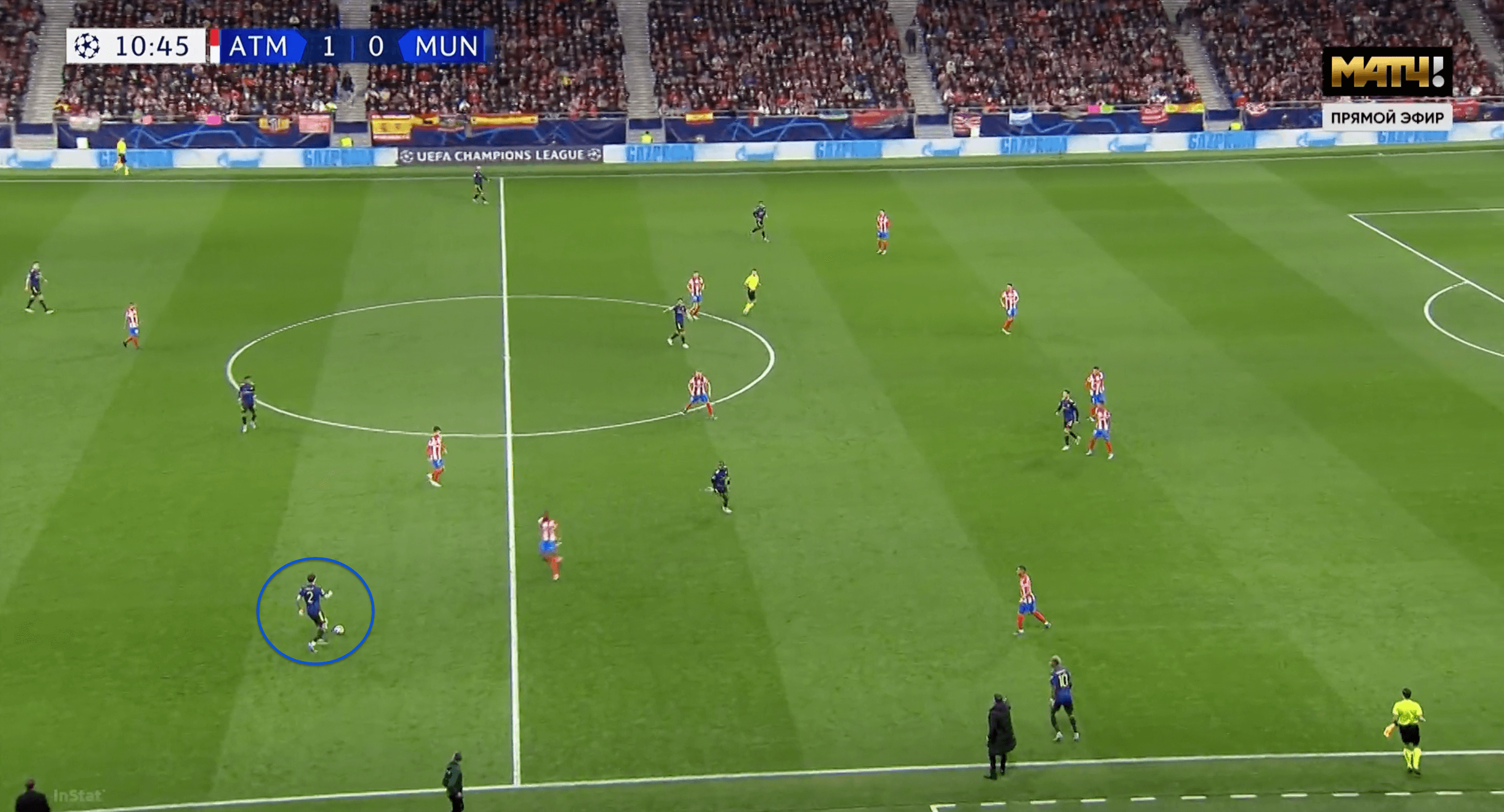 In the image above, we can see Lindelof playing as an RB and having the ball with him. But his body is not in the natural angles suited to an RB when he looks to pass the ball and he is in a more regressive angle. This means that he cannot play a pass to Rashford who could have then played a pass to Pogba with so much space around him. Dalot in this instance would have definitely found the angle to play a pass to Rashford or would even attempt a pass all the way to Ronaldo who could have played a wall pass back to Pogba. 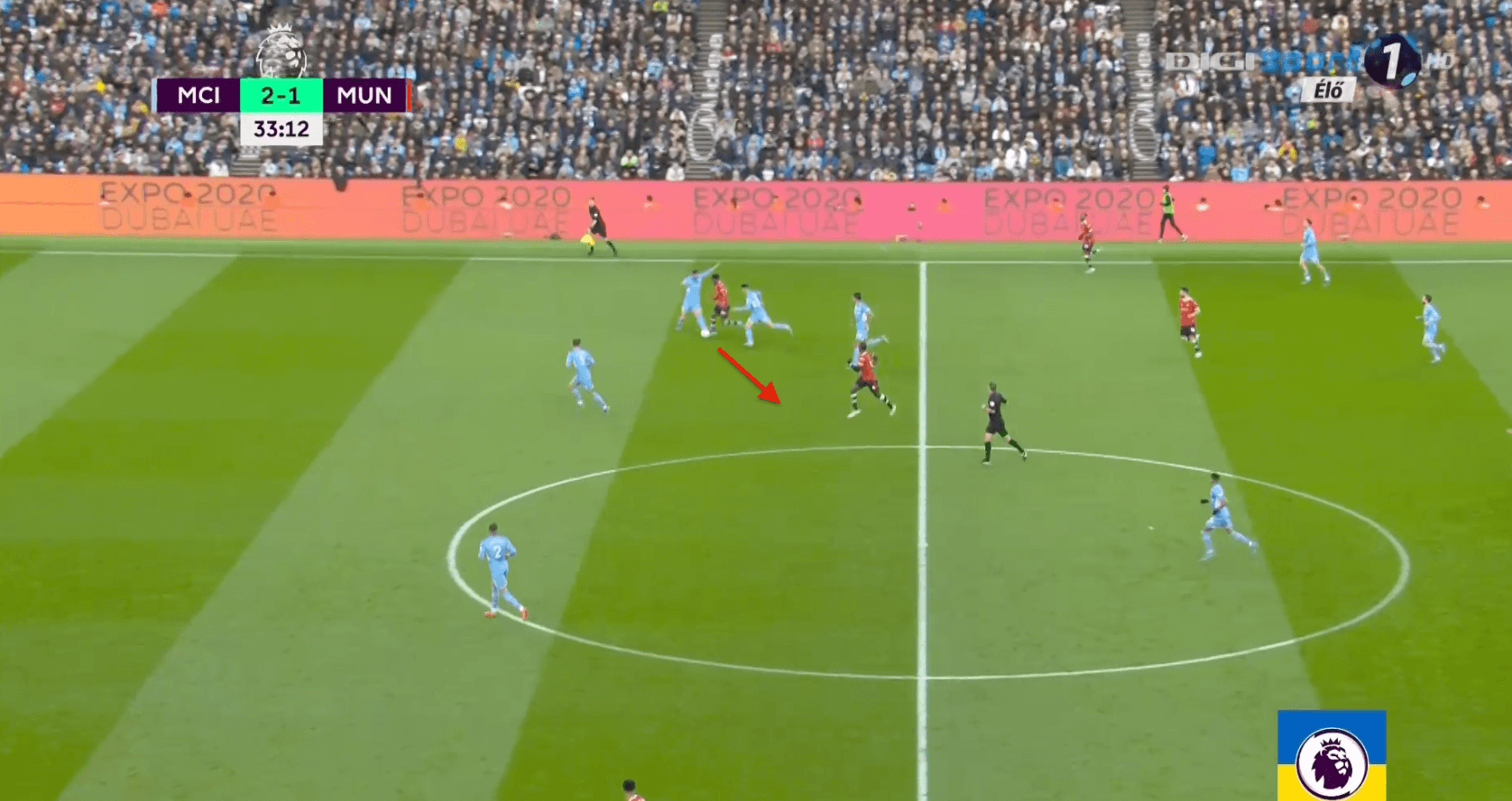 Rangnick also experimented with his lineup against Manchester City going back to his 4-2-2-2 formation with Pogba and Fernandes playing as the front-two while Elanga and Sancho were in the wings. Though his attack had a blueprint which can be found in this analysis, the lack of communication for players in their unfamiliar positions meant that the execution wasn’t up to standards like in the image above.

In this image below, we can see how the front four are very flat with all of them looking to occupy the last line and there is no connection between them and the defence. In this instance, one of Pogba or Fernandes could have dropped deep dragging the CBs out while the likes of Elanga could have attacked the space behind. It can be said that Rangnick set out to do this but the execution was lacking. 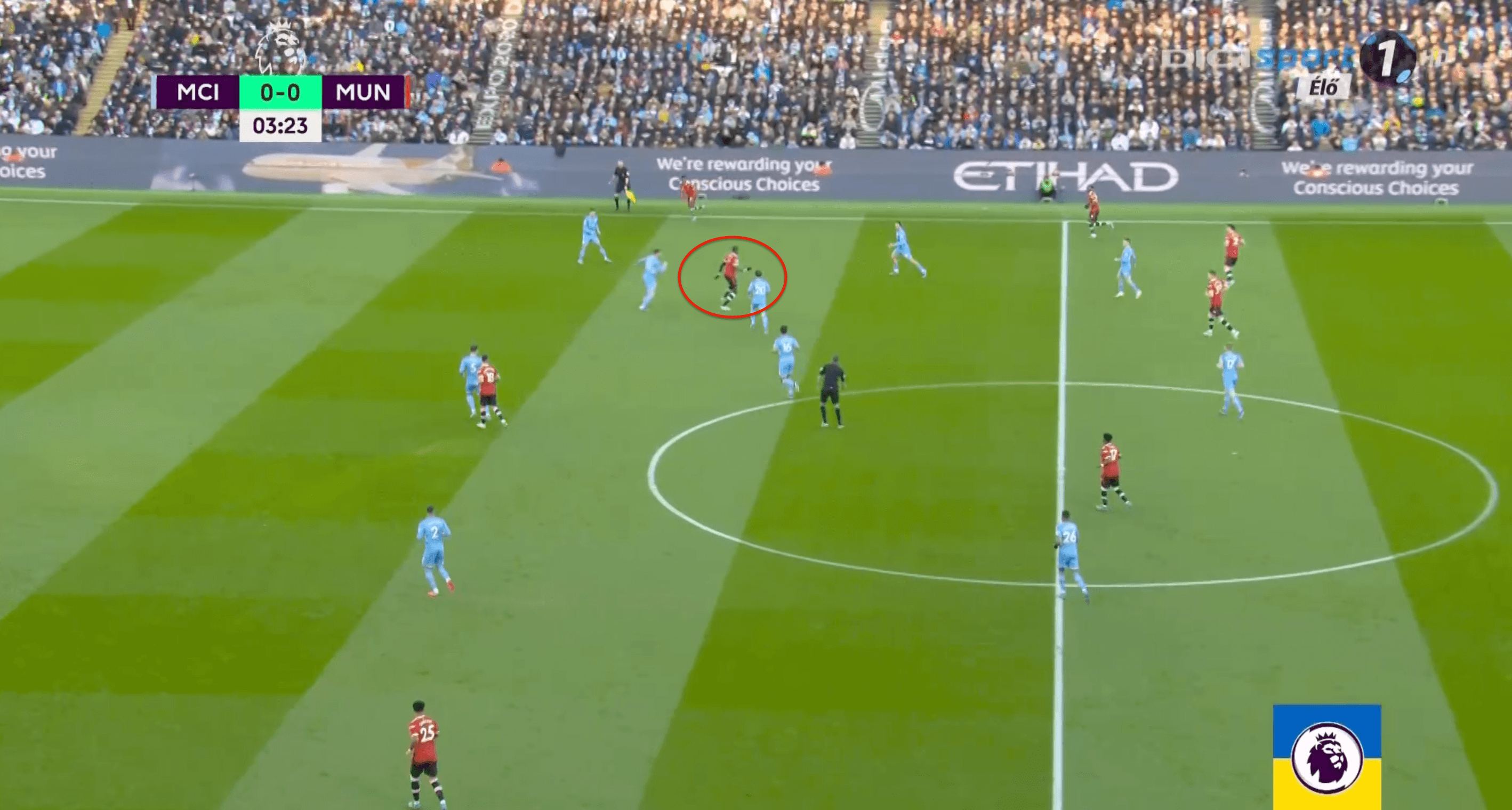 The primary reason for their attacking plan to falter in the first leg was the lack of a receiving outlet where all the players who started the game were inclined to get on the ball and that led to too much redundancy. In the image below we can see how the left flank is overloaded with the United players while there is no central presence to pin the defence. The positioning of Ronaldo here is extremely wrong where he shouldn’t have dropped deep with United already having three players. 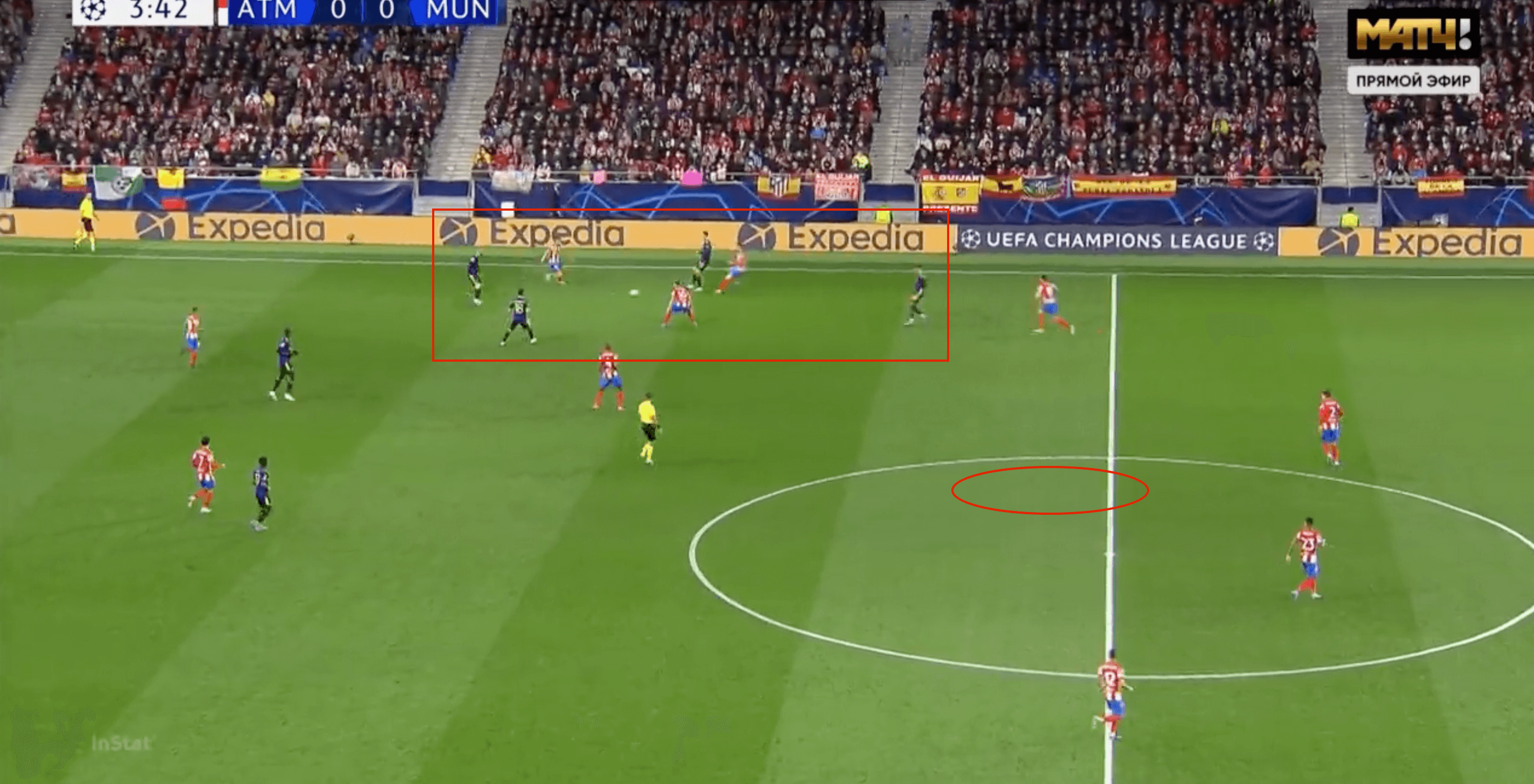 The presence of Sancho will be key to this tie as he is United’s most in-form attacking player and has been directly involved in goals recently. It would be interesting to see who Rangnick would opt for in the other wing. Both Elanga and Rashford are an option there but the former has been showing a much better tendency to attack space and make good off-ball runs. This kind of profile works perfectly for United because they have too many players who are good at progressing the ball but do not have the perfect player to receive it constantly. Elanga could certainly solve that issue which was even evident in the first leg when he scored the important equalizer.

United have had long-standing issues with respect to their midfield and defence. Despite some evident improvements to their structure, there are still issues that persist within their structure that was clearly exploited by both Manchester City and Atletico Madrid.

Their double pivot of Mctominay and Fred have played the majority of games under Ralf. Yet both of them are not natural defensive midfielders and are highly prone to mistakes with respect to positioning and concentration. In the first leg, Atletico constantly found access to the half-spaces with their player often making a run into that space and Fred failing to track the run. This resulted in Atletico constantly accessing the half-spaces and getting into the box. 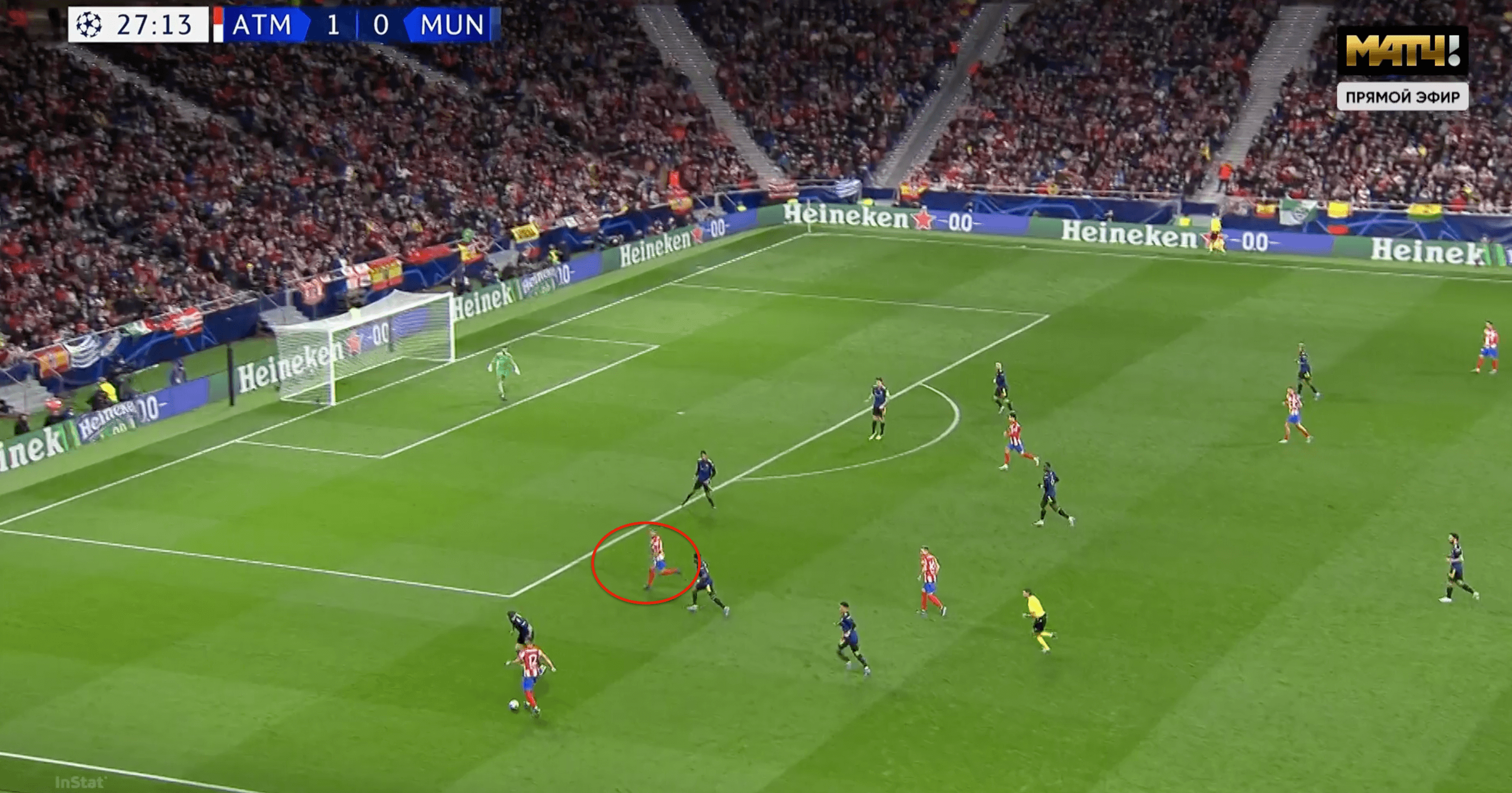 The lack of defensive effort from the attackers has always been a question for United under Ole. Even though this improved after the arrival of Rangnick, we can still see the likes of Rashford being ill-positioned defensively. We can see in the below example where Rashford is very far away from his marker Felix and could have certainly positioned much closer to him that would have seen United win the ball back immediately.

Manchester City constantly looked to target the right-flank of United in the derby where they were a bit sure as to how the players can be positionally comprising while defending. The likes of Elanga, Wan-Bissaka and Mctominay are good defenders when it comes to showing intensity and winning duels but they still lack positional sense which Manchester City looked to exploit. We can see that in the image below where Elanga’s positioned very high to press Cancelo and Mctominay is very narrow leading to City creating a 2v1 against Wan-Bissaka. 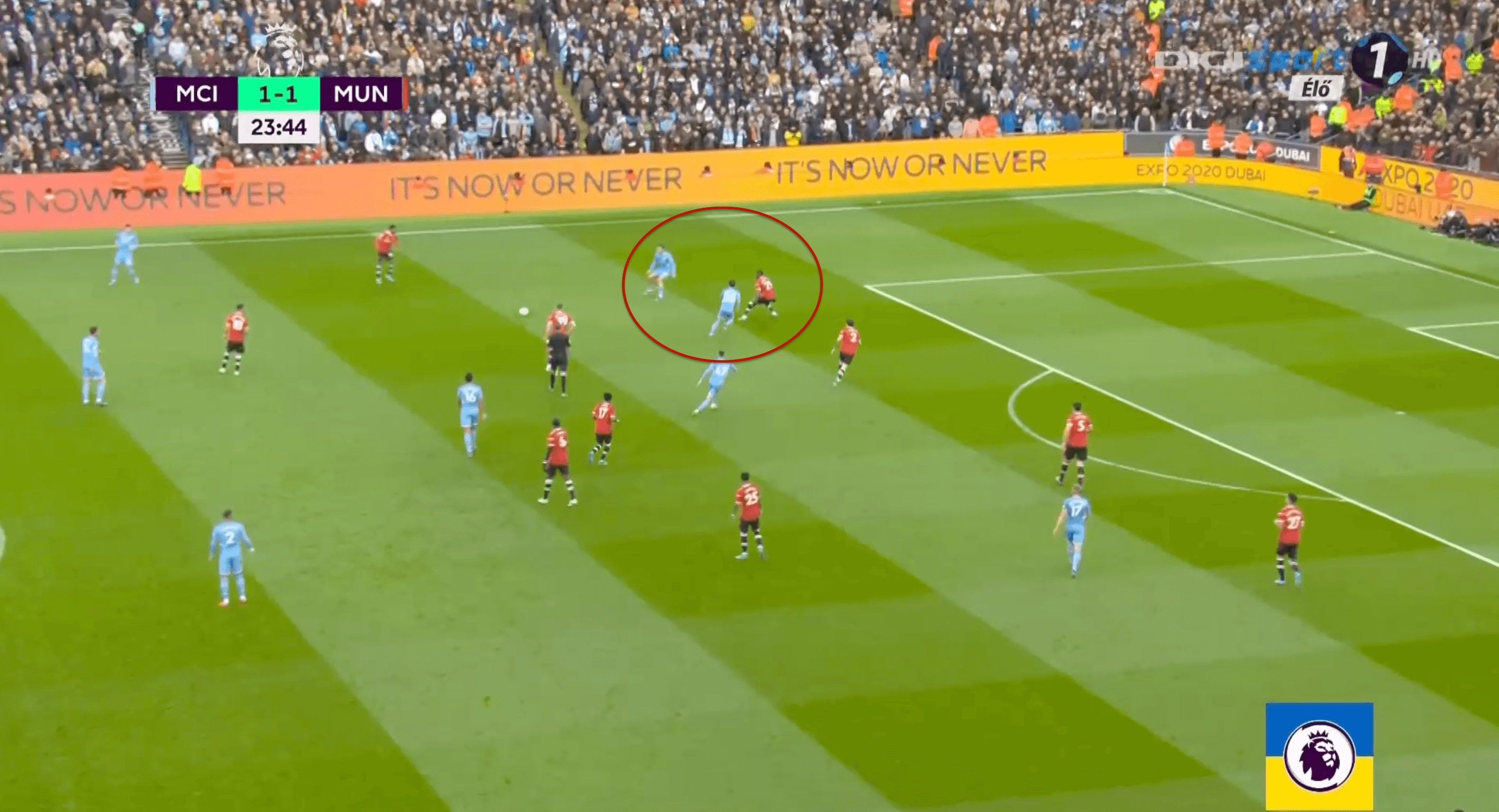 Man City constantly looked to create positional advantages on that side of the defence and the following image shows them creating even a 3v1 situation with the winger and midfielder all dragged out of their position. 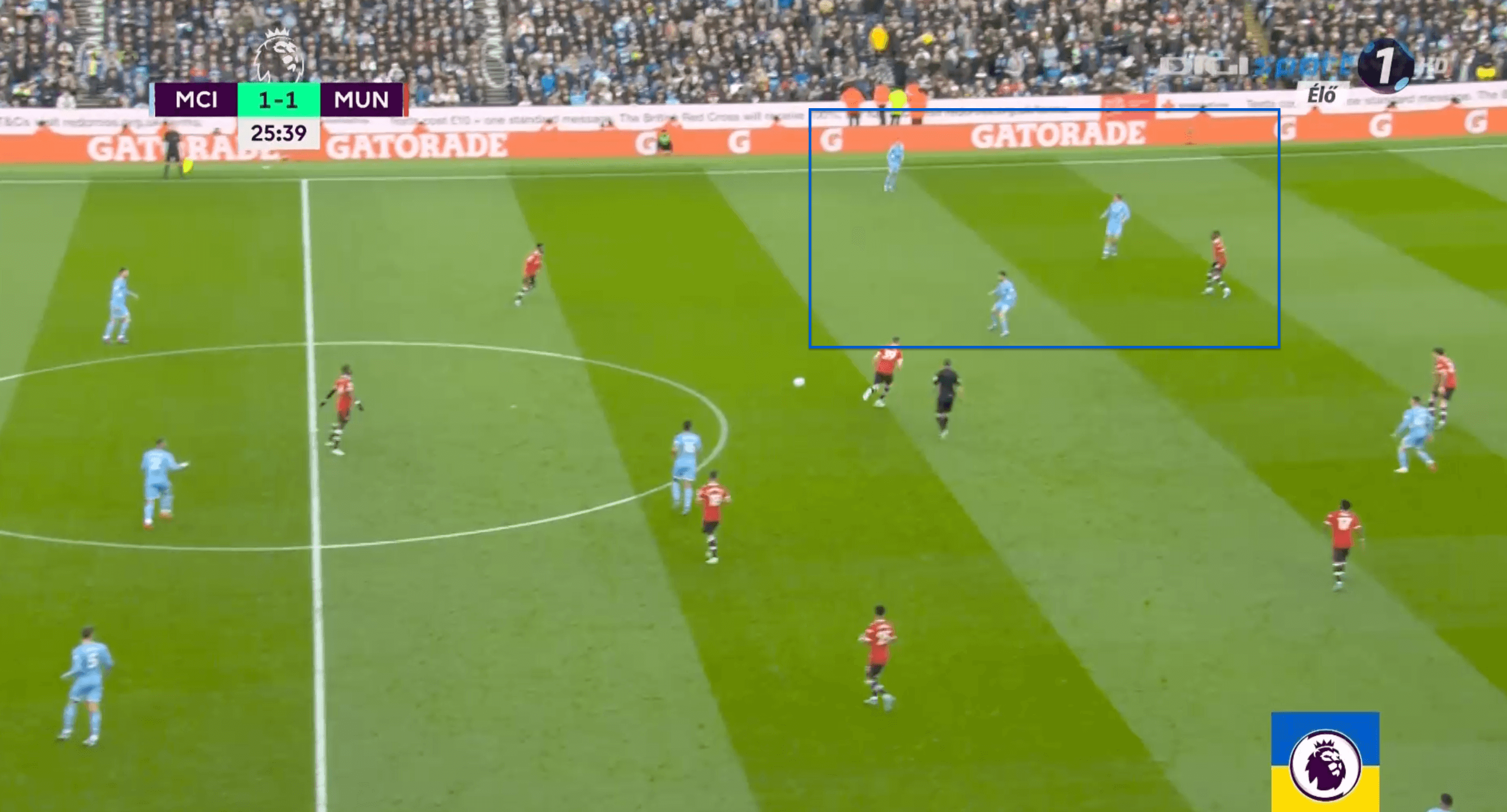 Though Atletico does not have the tactical nous that City have, they still are capable of creating a very good blueprint and executing it on a given day. Another issue that United have been facing is the frequency of errors the defenders make in the box that has led to cheap goals for their opposition. In the derby, Maguire made a very poor mistake of letting the ball run past him after it rebounded off a De Gea save. Though the argument of it happening in a flash of a second and Maguire cannot realistically prevent it does have a stake, he still could have dealt with it better. 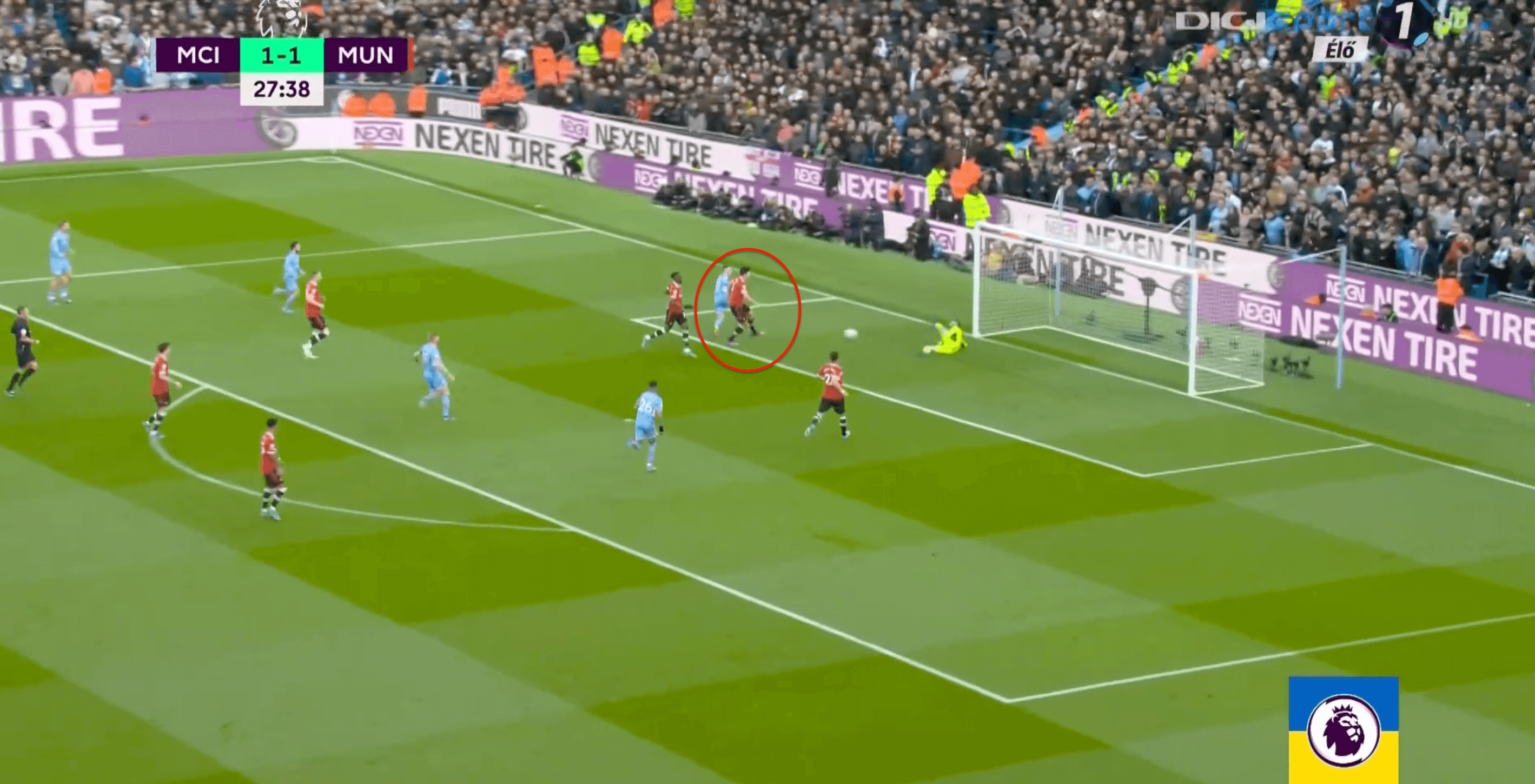 Even their first goal saw De Bruyne left unmarked in the box where we can see Telles pointing to someone to cover De Bruyne while the pass from the wings were left open to him. This could have been avoided had Sancho been much closer to De Bruyne or Fred being at the right place in the box to block the pass from reaching the Belgian. 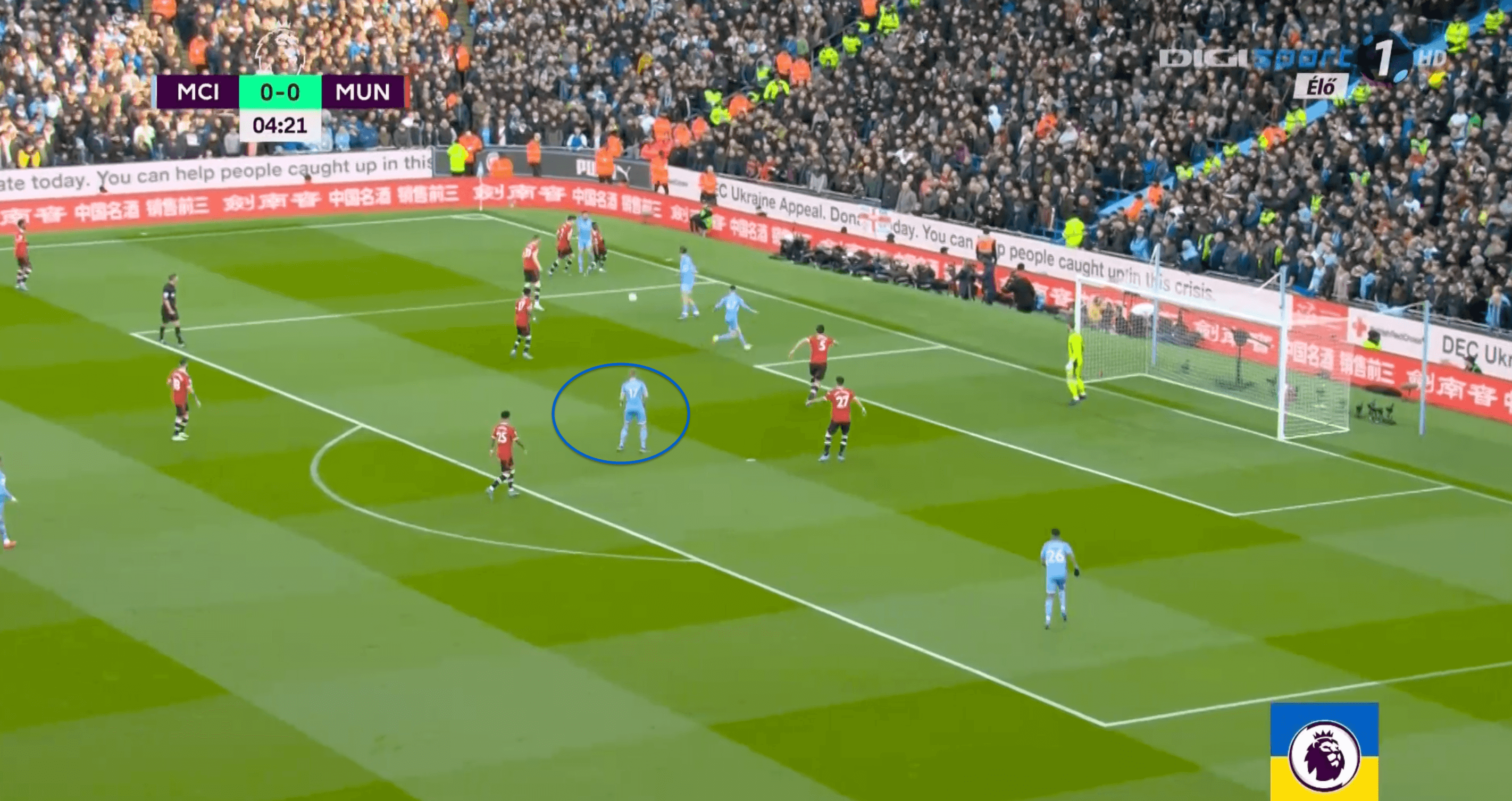 Another issue for them is the lack of sweeping from their main goalkeeper De Gea. For all his exploits in terms of shot-stopping this season, he still remains a liability in terms of coming off his line or collecting crosses in the box. This has led to United not being able to successfully play a high line in many games. We can see how he almost botched his timing with respect to sweeping in the image below where his lack of communication and understanding with the defence meant that he and AWB almost collided together. 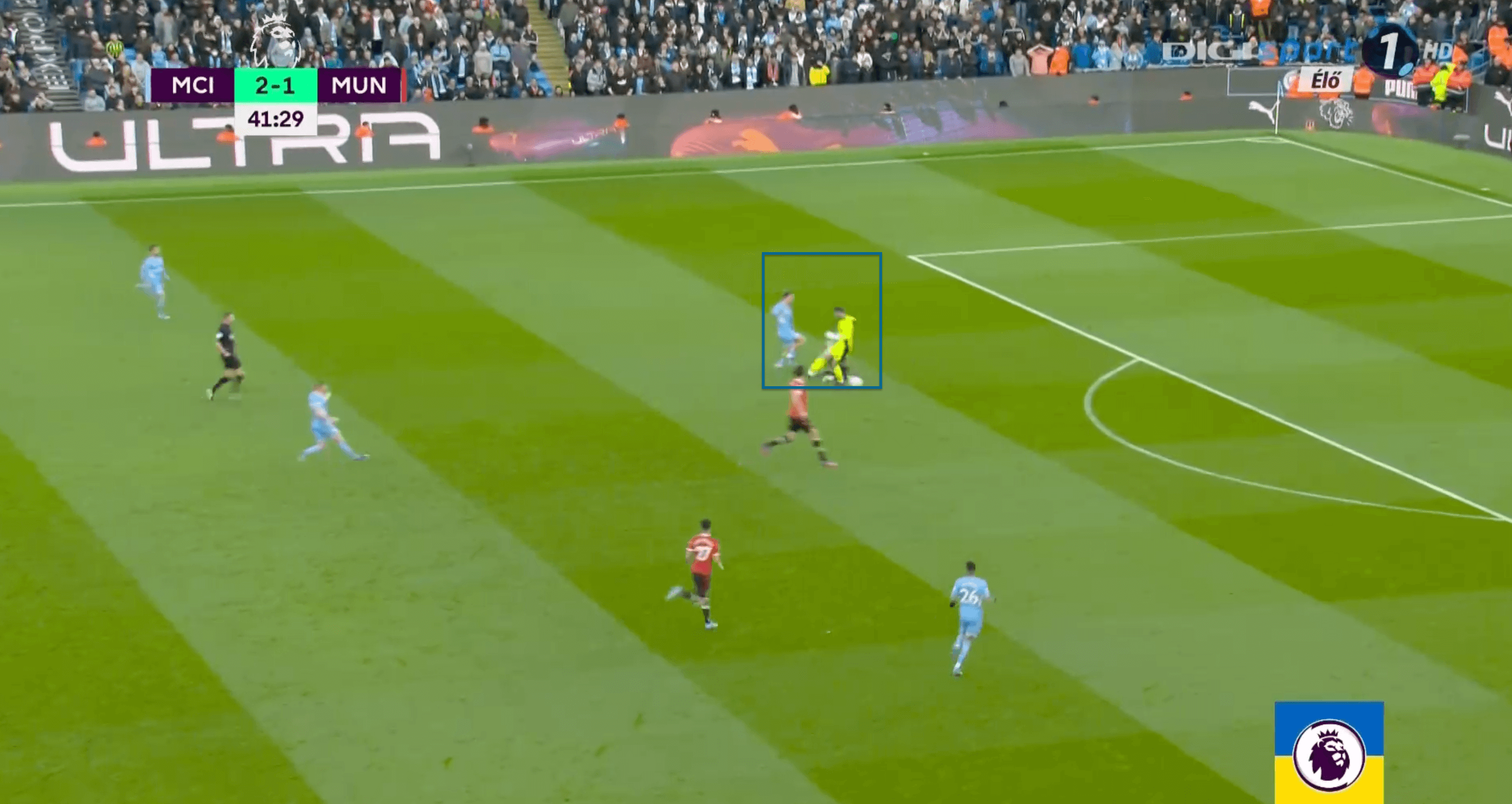 Diego Simeone has had a very difficult season with his club failing to meet the standards they set when they won the league last season. But the past few weeks have seen them build some fine form and also saw them better United in the first leg for the majority of the game. Both Griezmann and Luis Suarez has been relegated to the bench in recent months with Felix and Correa being their preferred front-two.

Simeone has also used his front two very well in recent weeks and Felix has been playing a very key role in their form. He generally drops into pockets of spaces and this was evident against United where he constantly found those and looked to make good use of that every time he received the ball. We can see that in the image below, Pogba moved forward to press and that created space for Felix to drop into with Rashofrd not using his cover-shadow well. This meant an opportunity for Felix to receive, turn and drive at the defence. 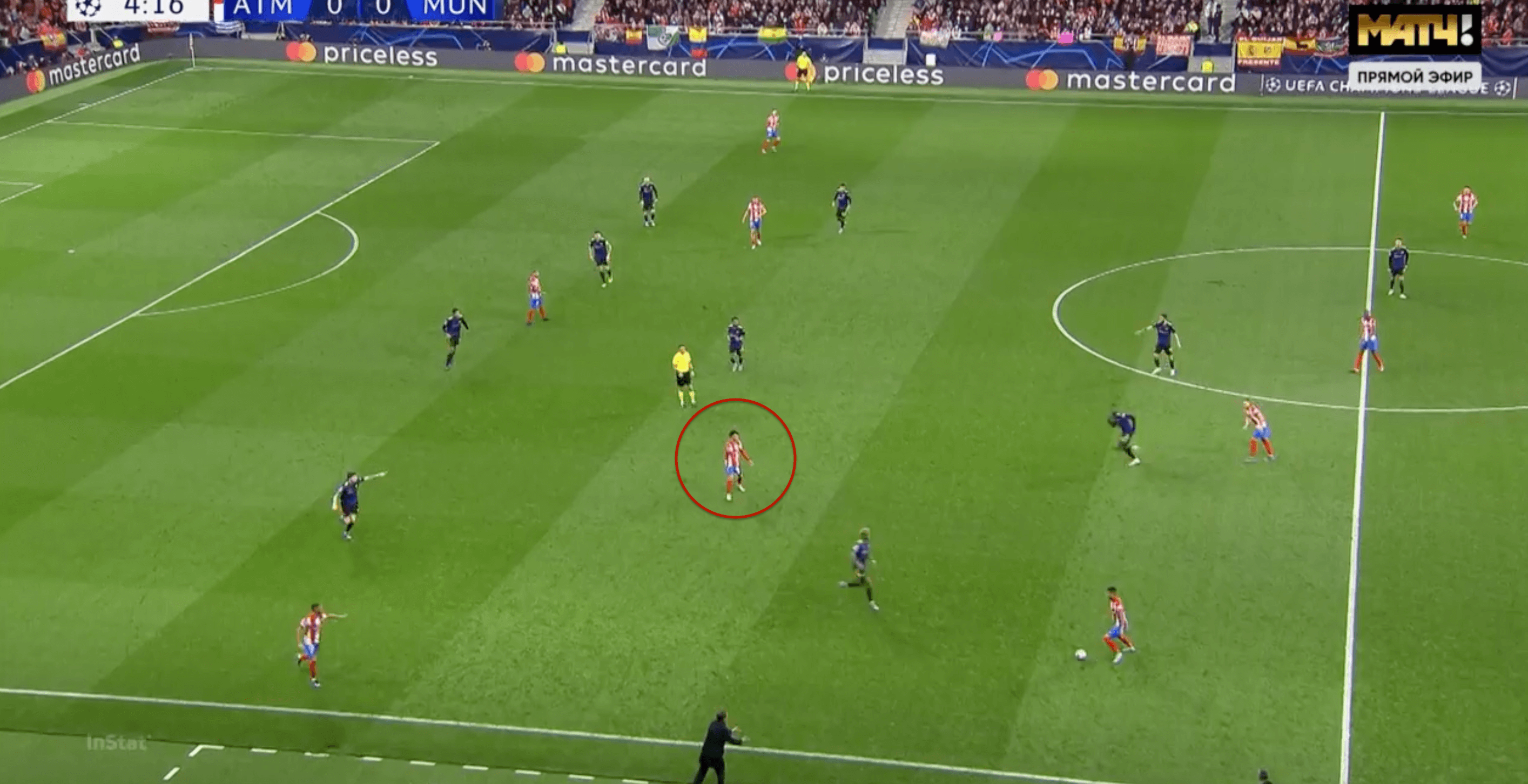 Both Correa and Felix complement really well where when one drops to receive the ball, the other looks to stay and pin the defensive line so that the spaces in between the line is created. With Correa doubtful for the game, Luis Suarez would right away take his spot in the lineup.

Atletico will vary of United’s issues with second balls where they would look to attack directly and make use of second balls to progress upfield. Even in the City game, there were instances in which United struggled to deal with second balls where their midfield players were very slow to get back as soon as possible in preventing these like in the image below with both Foden and De Bruyne showing much more intensity and speed to get back faster than Fred. 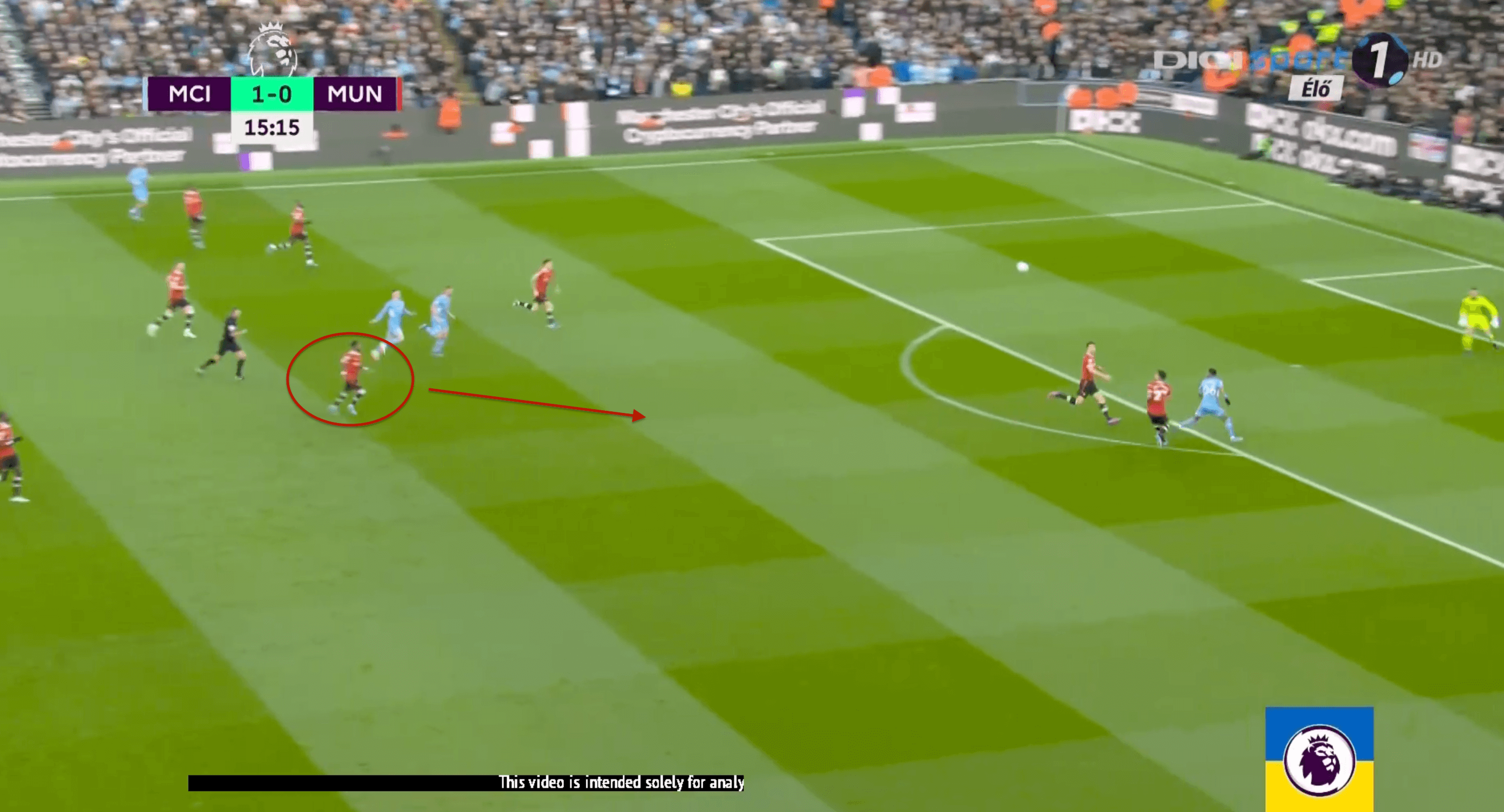 Atletico themselves scored a similar goal in their previous league win against Real Betis very early in the game where they went direct, won the ball aerially in the wings and immediately accessed the second ball to then play a cross for the goal. 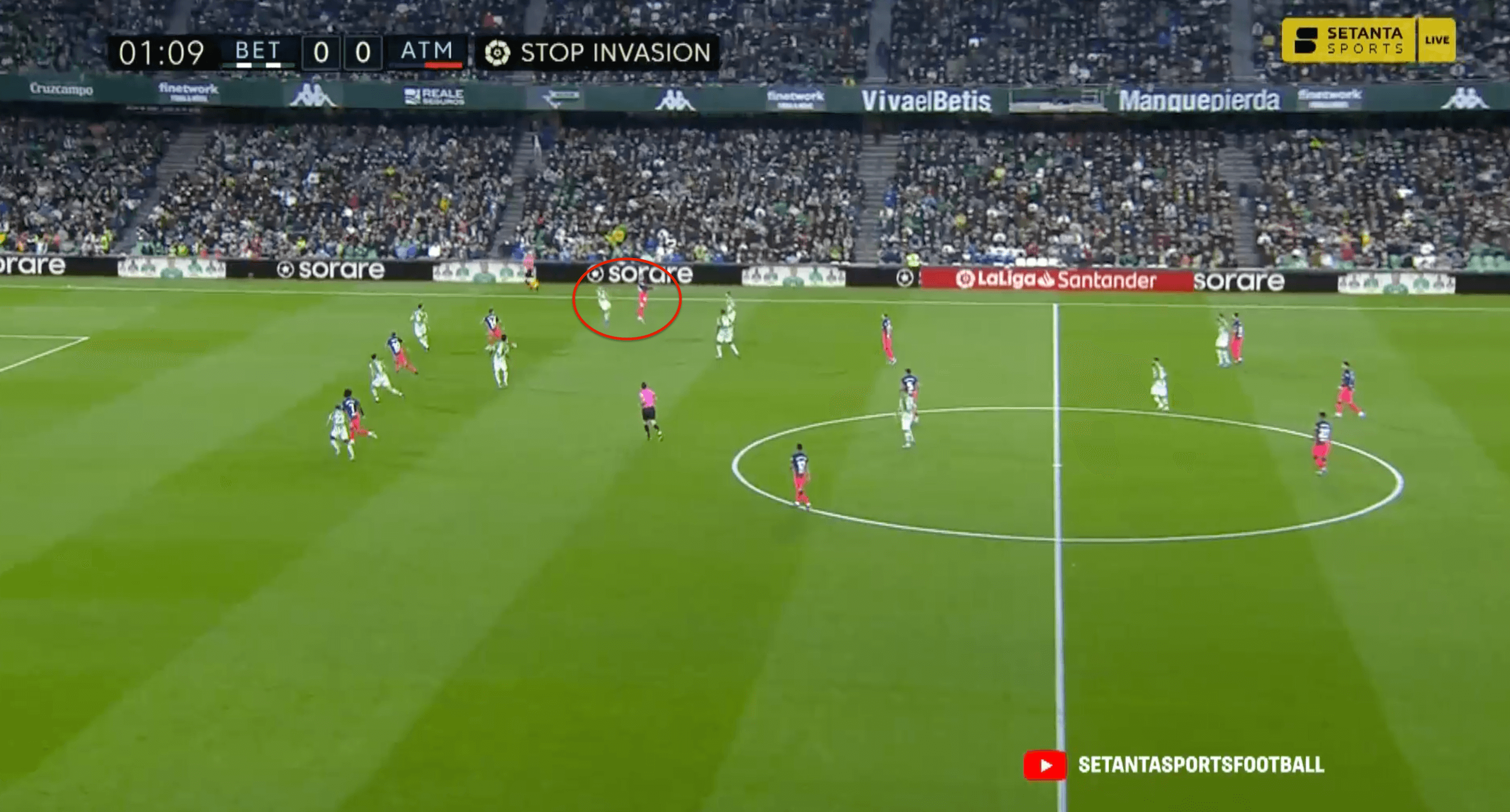 It would also be interesting to see who Simeone would start in the midfield with Kondogbia ruled out of the game. A midfield trio of Herrera, Llorente and De Paul might as well start the game but none of them are a bonafide defensive midfielder that can play as a lone pivot. A return to a 3-4-1-2 with Griezmann starting behind Suarez and Feliz could be on cards.

It will be interesting to see how the game pans out with both teams lacking edge going into the second leg. For Manchester United, this game will be important not only in terms of a trophy perspective but also given how Arsenal and to an extent Spurs have taken a lead in terms of league standings, the impossible job of winning the UCL is the only way in which they might make the next season’s competition.