Saturday afternoon will be a bit more emotional for some football fans. Liverpool are hosting Aston Villa but what is unusual is who is going to be standing in front of the guests’ bench. Steven Gerrard returns to Anfield but the occasion is a bit bittersweet – he will be going out against the club where he holds the status of legend as the new Aston Villa manager.

Many have been hoping that there will be a better reunion for him and his ex-club but despite that, it is certain that he will get the warm welcome that he deserves.

Gerrard’s task to get something out of this game will be difficult due to Liverpool’s form this season. The team have only been defeated once in all competitions and currently are the most efficient attacking team in the Premier League.

Aston Villa on the other side saw better days under their new manager as they have immediately improved in many areas but they are still very vulnerable. Winning three out of four games under Gerard, though, definitely brought some confidence back in the team and they look much better both in and out of possession.

But have they improved enough to challenge the title contender and limit Mohamed Salah who has scored or assisted in all but one Liverpool Premier League games this season?

Our tactical analysis in the form of a preview examines how the Merseyside legend can surprise the opposition and get a positive result out of the game through Villa’s improved tactics.

It is expected that there won’t be many changes in Liverpool’s squad compared to their starting XI against Wolverhampton. Jürgen Klopp still cannot rely on Roberto Firmino, Harvey Elliot and Curtis Jones but he does have a couple of players back from injuries which are important.

Naby Keïta and Joe Gomez, who were available against Milan too, will provide more options in midfield and defence and might be helpful against Aston Villa’s improved actions in possession. It is unlikely, though, that they will be starters in this game.

The manager will opt for their usual 4-3-3 formation and rely on high intensity and constant attacking movement to expose the opposition. It is expected that Villa will struggle with their coverage of the flanks as these are the areas where the team most frequently lose their defensive duels at. They frequently lose possession in the wide areas through inaccurate forward passing too. Matt Targett could be an easy target to Trent Alexander-Arnold due to his frequent loss of possession. It is expected that he will be available for Gerard but he will prefer to rely on Ashley Young at the left-back again.

Matty Cash and Douglas Luiz are also some vulnerable spots in terms of defensive actions which should be carefully considered, and they need to have better support from their teammates, especially in terms of anticipation and not giving the opposition too much space in their areas.

Ollie Watkins’ frequent loss of possession in the advanced areas could also be something Liverpool could use in their favour and Villa should be prepared for frequent counter-attacking actions.

Trezeguet might finally be available for the Villans after being ruled out since April due to injury. It is unlikely, though, that Gerrard will risk and give him a starting spot.

The new manager will most likely stick to a 4-3-3/4-3-2-1 formation and won’t be making any changes, although he might be willing to switch to Villa’s previously used 3-5-2 to have better defensive coverage of the half-spaces and the wide areas.

What are the Villans’ strengths?

The improvement in Aston Villa’s performance is noticeable and while a lot of it might be just as a result of a usual new manager boost it looks like the team have a better understanding of what they are required to do and also a better plan both in and out of possession. This is also supported by their data in Gerrard’s first four games, as they have improved numbers in each area.

Something that the Villans need to take advantage of is their set-plays. The team have been extremely successful in creating opportunities from set plays under Gerrard and they need to transfer this to Anfield too, despite Liverpool’s proficiency in defending them.

As it is unlikely for Villa to be allowed many chances on the goal from open play, they need to be smart in their set-pieces opportunities and make sure to threaten their opponents through strong positioning and smart set-piece strategy.

Liverpool will surely be prepared for this danger, but Gerrard’s side have been very efficient lately, scoring four out of their last seven goals from set plays (three from corners). They have increased their positional awareness and decision-making which allows them to convert their chances into goals.

On the other hand, Villa need to be equally aware of the threat that comes from Liverpool’s attacking set-pieces as they have been exceptional this season, scoring eight times from these situations.

The team have been much more threatening on a counter since Gerrard’s arrival. The team’s counter-attacking numbers have increased from 1.09 on average in their first 11 games to 3.05 per 90 in their last four games under the new manager.

A lot of it comes from their improved defensive performance as most of their counteractions come after they win the ball back in their own third. They not only win back possession after direct challenges but also have increased awareness and better reactions to the opposition’s inaccurate passing, which they use to make quick offensive transitions. It also helps them to take advantage of defending set-pieces and win the ball, trying to move it forward in the split second when the opposition might be disorganised.

The team now stay considerably deep as a unit and have an improved pressing strategy. Instead of involving in a high press and risking leaving gaps behind they have focused their press in the middle third where they have better coverage now. Their PPDA has increased since Gerrard’s arrival and they allow their opponents more time on the ball in their own third but pressurize them once they try to advance the ball in midfield. This allows them to stay compact and not break their structure, minimizing the gaps and having better defensive stability.

The team have an improved passing strategy as they now look to have control and use short passing and better movement to progress the ball. They have increased the pass frequency and having a better plan in possession has immediately affected their pass completion rates.

Their improved structure results in more accurate actions in the build-up and well-measured off the ball movement compared to their disorganised actions under Dean Smith.

The full-backs are required to support the attacking actions but also the movement of the other wide players has improved as they now switch positions and are more creative upfront. While the team now produce fewer shots per 90, they have an increased shot accuracy that has resulted in better goal efficiency. It is safe to say that Gerrard relies on quality over quantity.

The team were incredibly reliant on crossing under Smith, while now, they have fewer attempts but with better quality. Instead of constantly trying to expose the opposition through the wide areas, they now try to be more creative and use the other channels too, attempting more smart passes than before, indicating their improved connections and creativity. Their measured crossing approach has definitely affected their shot frequency, but the quality of the attempts has brought a better threat in front of the goal. 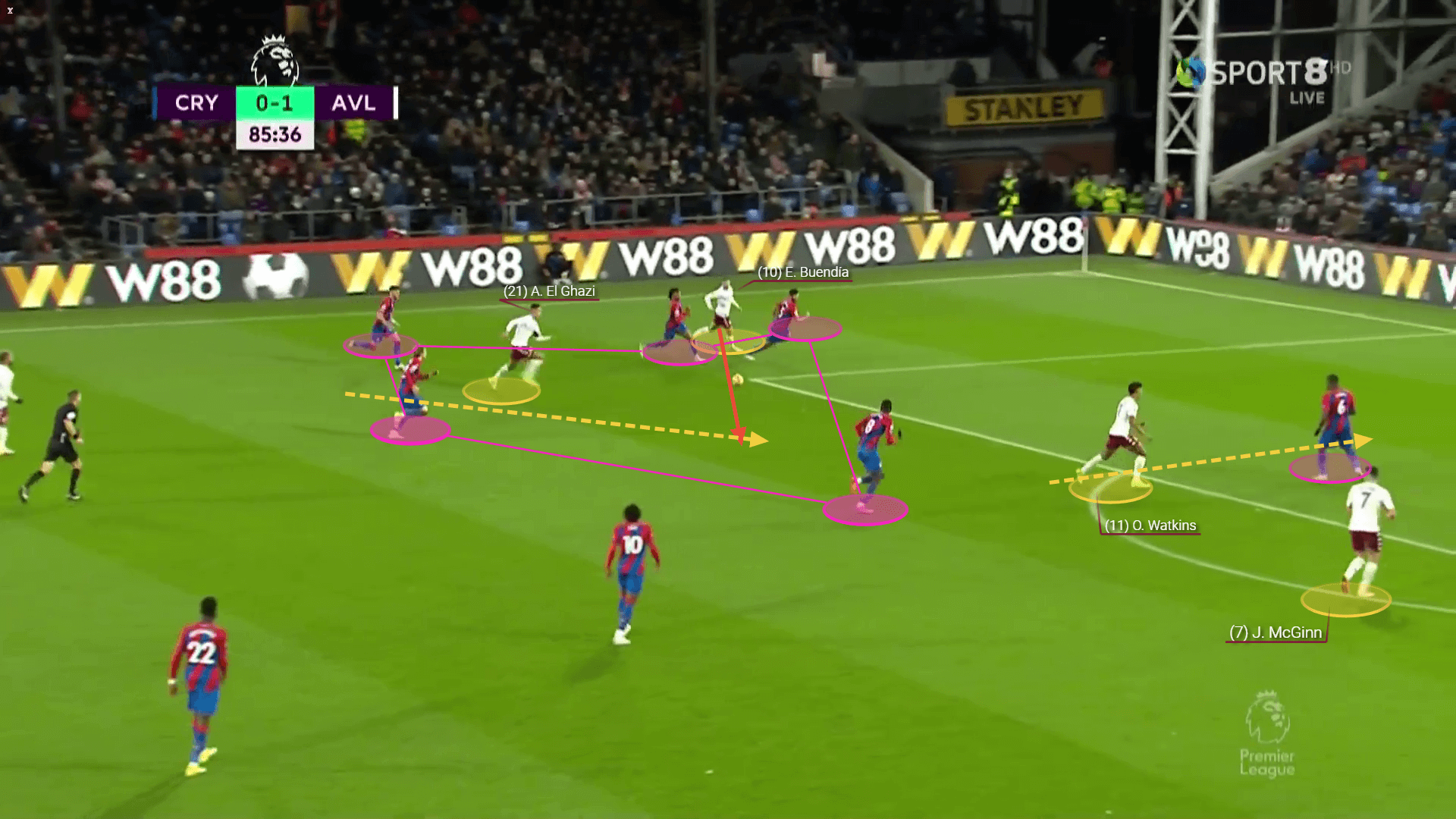 After creating shot pass combinations they quickly attacked and used their movement to drag players out of position, leaving McGinn completely uncovered and able to receive the ball and shoot.Liverpool need to be aware that Villa’s positioning now allows them to shoot from more dangerous areas and their patience on the ball can be the key to exposing any little gaps that occur.

With only one defeat against Manchester City in their last four games, Aston Villa showed their improvement under Steven Gerrard and showed that they have quality in the team. With an improved strategy both in and out of possession, the team are now more threatening and have their ways to expose the opposition. Being organised and calm against Liverpool will certainly be more difficult but the team need to have increased awareness and try to take advantage of their opportunities, especially when it comes to attacking set-pieces and counter-attacking actions.