Every football club is trying to find the next hidden gem, someone who is undervalued and can be attained for as little as possible. As the recruitment process has evolved data can play a vital role in this but also being aware of the market is a crucial factor. By that, I mean understanding the biases, market conditions and opportunities that arise during the recruitment process, something the best recruiting teams do excellently. A player who would tick all these boxes would be Enis Bardhi.  Bardhi is a 26-year-old Macedonian international who currently plays his football for Levante, who sit at the rock bottom of La Liga. Despite this, he has managed to consistently be a real threat on the ball and been a creative presence for the Spanish club.   His contract is up this summer, but Levante does hold the right to extend it another two years, however at the time of writing this hasn’t been triggered. Even if they did trigger the extension, the transfer fee required to sign Bardhi would be relatively low with Levante most likely being relegated (a perfect example of understanding the market).  This will keep the cost of the acquisition to a minimum.

This scout report and tactical analysis will take a look into Bardhi’s game and some of his creative attributes which make him an undervalued talent.

Bardhi is an attacking midfielder, who is versatile enough to play in different systems and tactics, being able to operate as a more box to box number eight but also can play as a number 10 or even as an inside forward. This is reinforced by his heat map below which shows him operating over the majority of the pitch. This season Bardhi has been used in a variety of roles, from a left-sided midfielder in a 5-3-2 to right inside forward in 4-2-3-1. His ability to play in a variety of positions too makes Bardhi very effective. 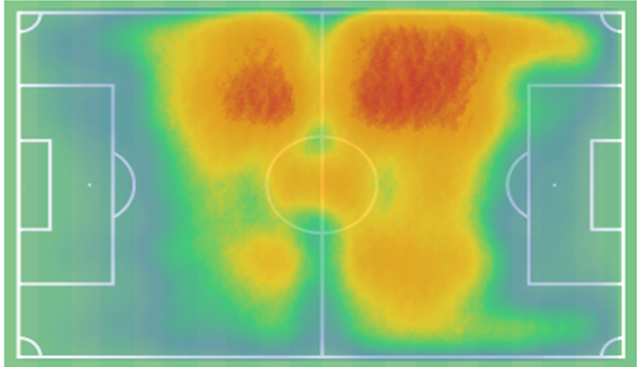 The use of data helped me identify Bardhi. He has managed to consistently perform well in creative metrics this season, which is interesting considering he is playing for the worst team in the league. This is arguably the best feature of data; it can allow you to identify potentially undervalued players who you can then take a deeper look at using more traditional methods, and this is what we will do in the analysis. In this section, we will look at some of the metrics Bardhi has been performing well in this season and what they reveal about the type of player Bardhi is.

Firstly, we will look at his at assists per 90 and expected assists per 90. Bardhi ranks above average amongst La Liga attackers and midfielders with over 1000 minutes. His assists per 90 are slightly below XA per 90 but a little bit of variation is normal. Creating an assist at that rate is impressive and is higher than someone like Antoine Griezmann at Atletico Madrid. 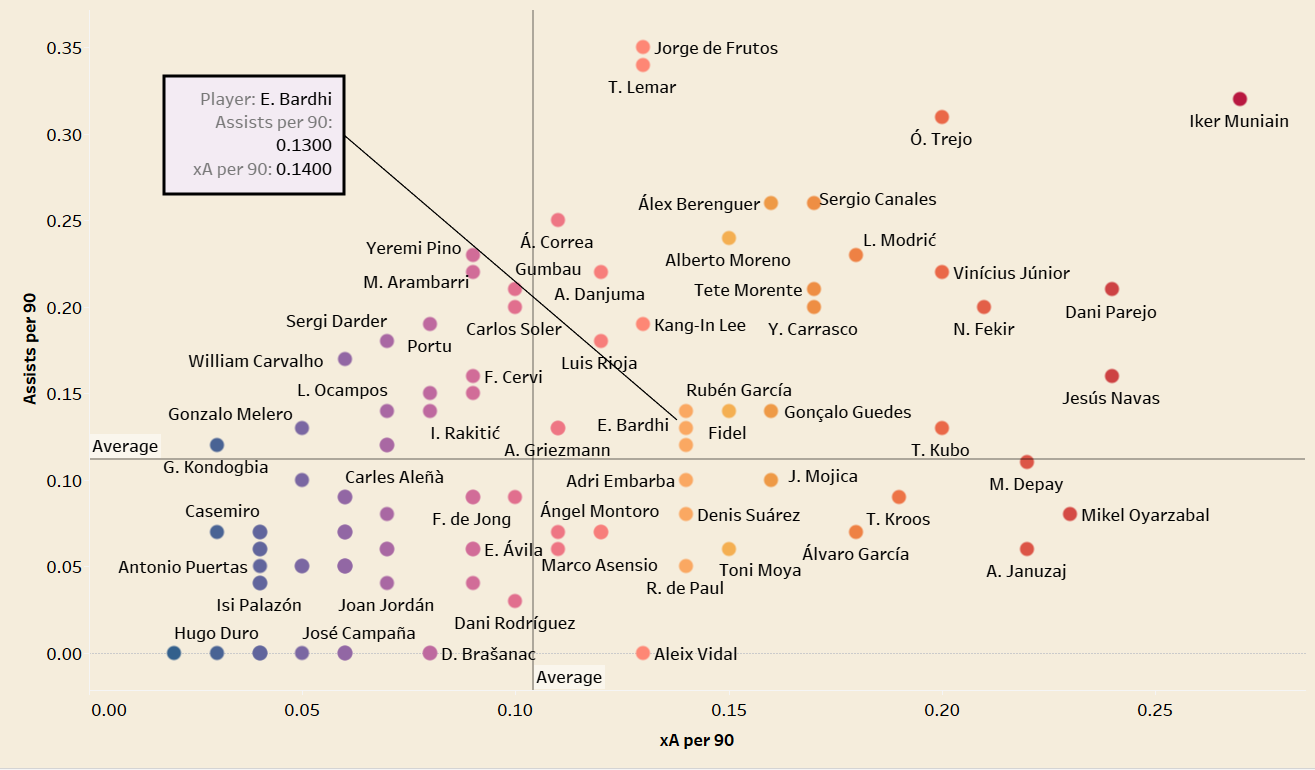 Another way of gauging Bardhi’s creative output is to look at key passes per 90 and smart passes per 90. Key passes are passes that directly lead to a goal-scoring opportunity for the team. A smart pass is a creative pass that attempts to break the opposition’s defensive line.  Below shows how Bardhi fairs in these metrics. 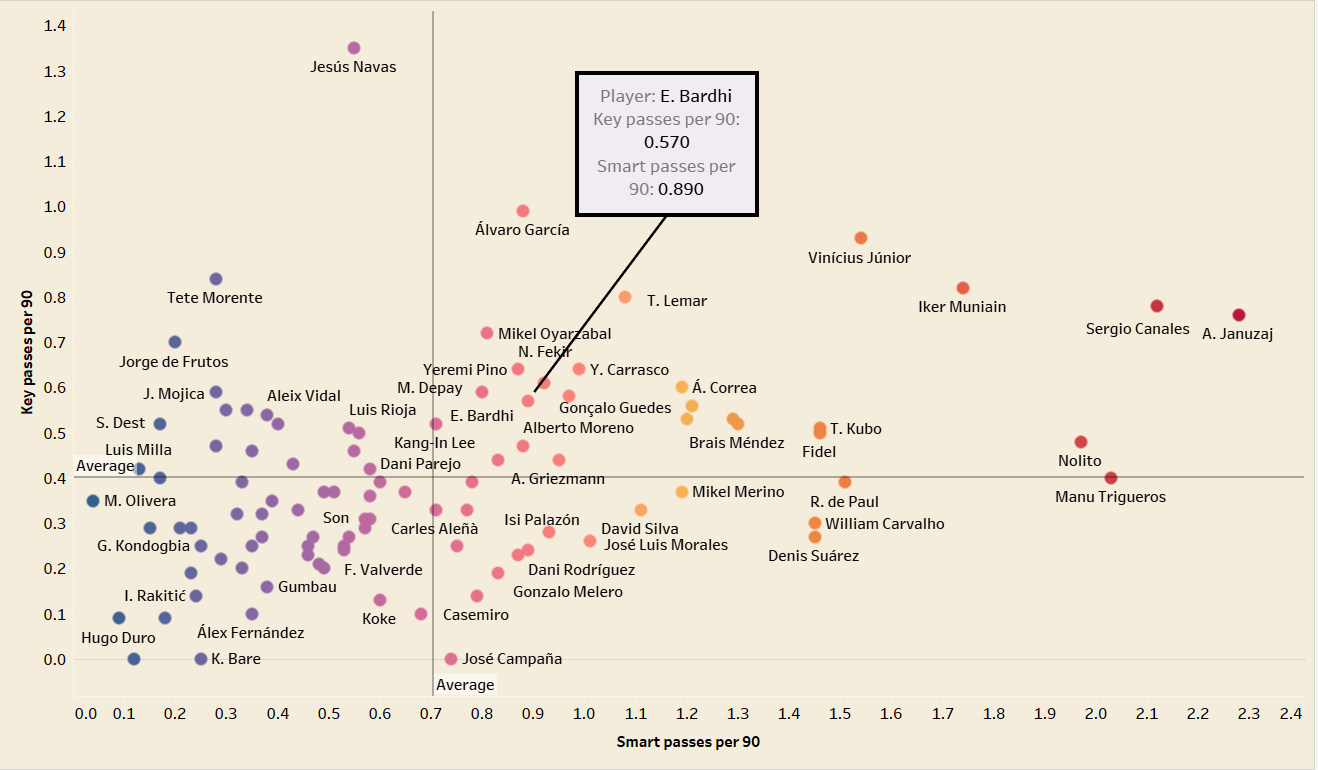 Again, he is above average in both, managing 0.5 key passes per 90 and 0.89 smart passes per 90. This is very impressive, especially considering he is playing for a team like Levante, who don’t dominate possession. The players in a similar range to Bardhi are the likes of Depay, Fekir and Oyarzabal who all play for top-six sides. Bardhi also performs well in progressive passes and passes to the penalty area, showing his ability to progress the ball forward. His progressive passes are slightly below the average of the sample but his passes to the penalty area are above average managing 3.19 per 90. This can maybe indicate that Bardhi is a player who excels in the final third and in and around the box rather than deeper in the build-up play. 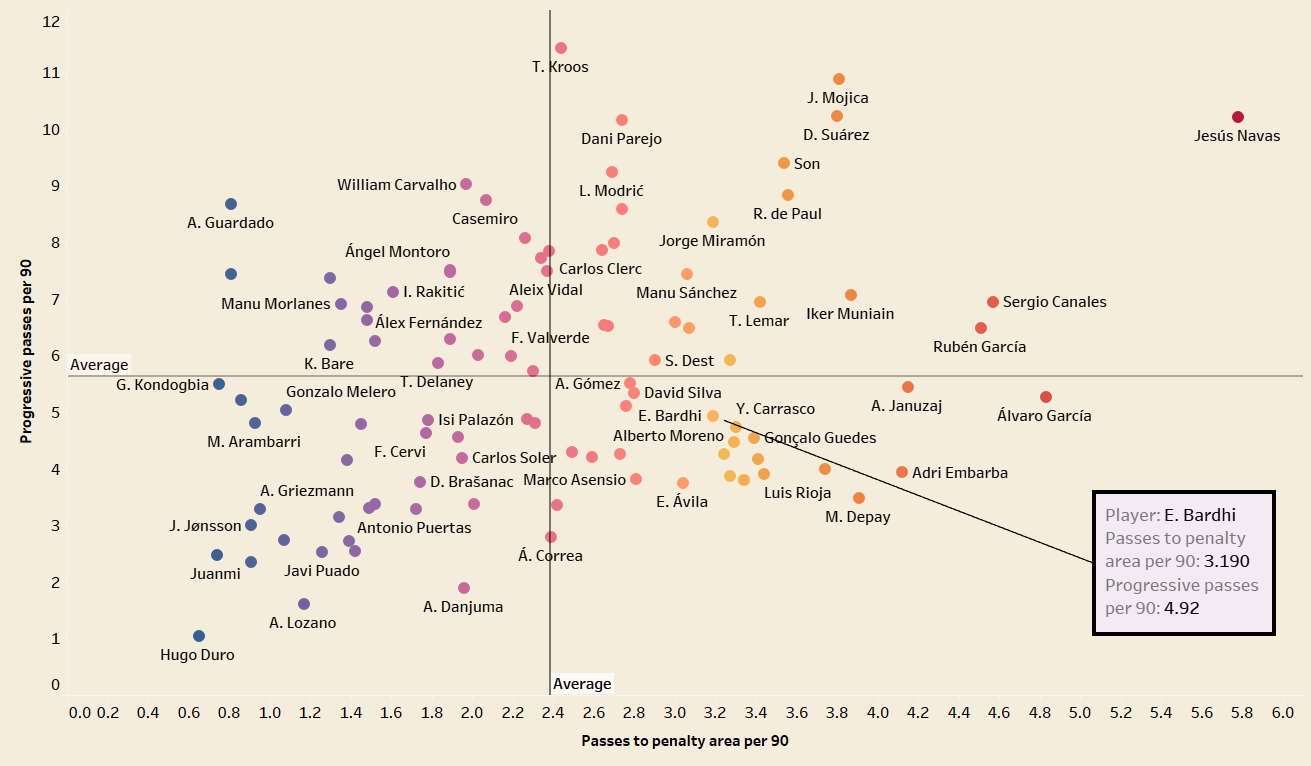 The final aspect of Bardhi’s creative ability we will look at is his dribbling, Bardhi attempts an above-average amount of dribbles per 90 at 4.47. He has an average win % of these dribbles managing to succeed 52% of the time. Bardhi has a low centre of gravity with a great burst of speed, this makes him dangerous with the ball at his feet, especially in the box something we will look at later in the report. 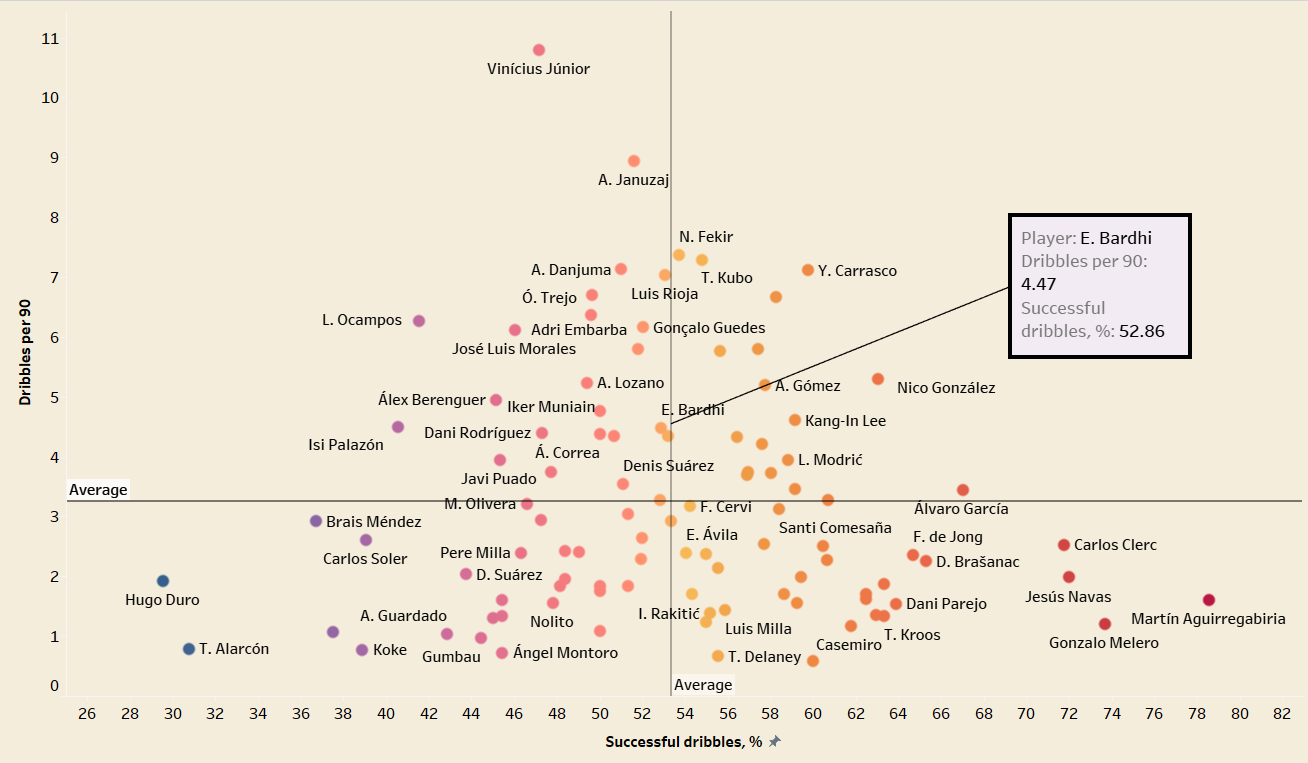 This data section should highlight Bardhi’s attacking and chance creating quality but also the variety of ways he can do this being effective in both passing and dribbling the ball. He consistently manages to perform with some of the league’s best over a variety of metrics and shows that Bardhi is an underrated player. The data also indicates that Bardhi’s best play comes in and around the box with him managing to create chances regularly.  In the metrics shown Bardhi performs similarly to someone like Goncalo Guedes, who transfermarkt have valued at £27 million. When you consider that Bardhi would cost a fraction of that it becomes apparent that Bardhi could well be a bargain this summer.

As established in the data section of this scout report, Bardhi is a great passer of the ball. Especially when he is in and around the box. He has a great vision to see passes but also great touch and execution to make the passes as effective as possible. Bardhi’s touch and finesse around the box can be perfectly demonstrated with the example below. The ball has just been cleared from a corner and a pass has been played to Bardhi, he has one touch and manages to scan the pitch at the same time, shifting the ball onto his left foot he picks out the only Levante man in the box.

He manages to chest the ball down but pushes his shot wide. This pass shows great touch and vision, creating a quality goal-scoring opportunity for the team which gets squandered. It also should be noted that this is why expected assists and key passes per 90 are vital when assessing creative contribution. As the player can only make the pass, they cannot score it, with it being out of their hand, their assist numbers can be heavily skewed.

This can be reinforced with another example, this time it comes against Real Betis. The ball has deflected in the air and Bardhi deftly brings the ball under control, he identifies that the Betis right-back is particularly high and ball watching. He plays a well-timed pass in behind for his teammate to run onto. The ball is far enough in the box to create a goal-scoring opportunity but not too close to the keeper.

The resulting shot hits the crossbar denying Bardhi an assist. But again reinforces the quality and finesse Bardhi has in the final third.

In addition to his excellent passing, Bardhi is dangerous in 1 v 1 situations. He has great footwork and a low centre of gravity being able to quickly glide past defenders. He also usually partners this 1 v 1 ability with the excellent end product to deliver a quality cross or cut back.  In this example, Bardhi has just received the ball on the edge of the box. He is going to go inside the defender and chop back inside, into the highlighted space. Doing this he leaves the defenders behind and smoothly creates a pocket of space in the box.

He then drills an excellent pass across the face of the goal only for his teammates to fail to get a touch and convert.

The next example is very similar, but this time Bardhi manages to beat three men before making a well-executed pull back. He starts the move by simply receiving the ball off a throw-in.

The two nearest Getafe men go to challenge Bardhi but he evades the challenges and ends up in another 1v1 situation. This time he uses his pace and acceleration to glide past the Getafe defender and carry the ball into the highlighted space in the box.

When Bardhi gets into the box, he again finishes the move off with an excellent cut pack for a teammate. Again, his teammate fails to finish the move with his shot hitting the post.

Both these examples show the quality Bardhi possesses with the ball at his feet both in terms of dribbling and passing and also that Bardhi can produce quality chances for his teammates.

The following scout report and tactical analysis should highlight why Enis Bardhi will make an excellent signing for someone this summer if someone is smart enough to act. You can’t help but feel he wasn’t from an untraditional nation, like Macedonia and wasn’t playing his football for a relegation team there would be more interest. Previously Arsenal was reported to be interested in Bardhi but nothing ever materialised. His attacking contribution partnered with the little or no transfer fee that would be involved certainly make Bardhi a hidden gem.