Ryan Gravenberch 2021/22: Is he ready for the likes of Real Madrid – Scout report

Ajax is world-renowned for producing world-class footballers – many would argue they are the best in the world at this. Their academy has and still produces some of the world’s best footballers who often have excellent tactical and technical skills. This current Ajax team has some of the most sought-after names in football and Ryan Gravenberch is arguably the top of that list.

Ryan Gravenberch is only 19 years of age and has already racked up over 50 appearances for the club and has become an integral part of their dominant side. He possesses both physical and technical attributes and is drawing the attention of Europe’s biggest sides including Real Madrid, Barcelona, and Bayern Munich. The Dutchman has vowed not to leave the club on a free transfer out of respect to the club and this will likely see him depart this summer. Players who come through the Ajax academy are always sought after due to the history of their academy, which sometimes leads to players being overvalued and this is part of the desire to write this article, to try and truly evaluate Gravenberch.

This tactical analysis and scout report will look at Gravenberch and whether he is ready to make the step up and play for the likes of Real Madrid.

Gravenberch is a central midfielder, who currently operates as a number eight. Ajax currently plays a 4-3-3 tactical system, with a midfield of Edson Alvarez operating at the base as a number six and two number eights, Gravenberch and Berghuis. Gravenberch operates on the left of this midfield three. He has the tendency to drift wide and operate those wide left spaces, shown below, this is predominantly down to the tactics Ajax adopt currently. This can be illustrated better by looking at the heat map below showing the majority of Gravenberch’s play is on the wide left. 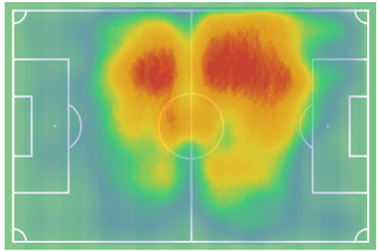 Within the scouting and recruitment process, data is now an integral part and must be considered when scouting and analysing a player. In this section, we will take a look at a couple of metrics that can help us understand Gravenberch and some of his key attributes but also how he is performing against fellow Eredivisie midfielders. The following graphs show Gravenberch amongst fellow Eredivisie midfielders who have achieved over 500 minutes for their club this season.

The first aspect of Gravenberch’s game we will analyse is his ball progression, both in terms of passing and ball carrying. If a player wants to progress the ball up the field, they can achieve this through passing the ball but also carrying the ball, something Gravenberch does better than most.  Gravenberch is second in the sample for progressive runs per 90 with 2.9 and ranks just above average in progressive passes. 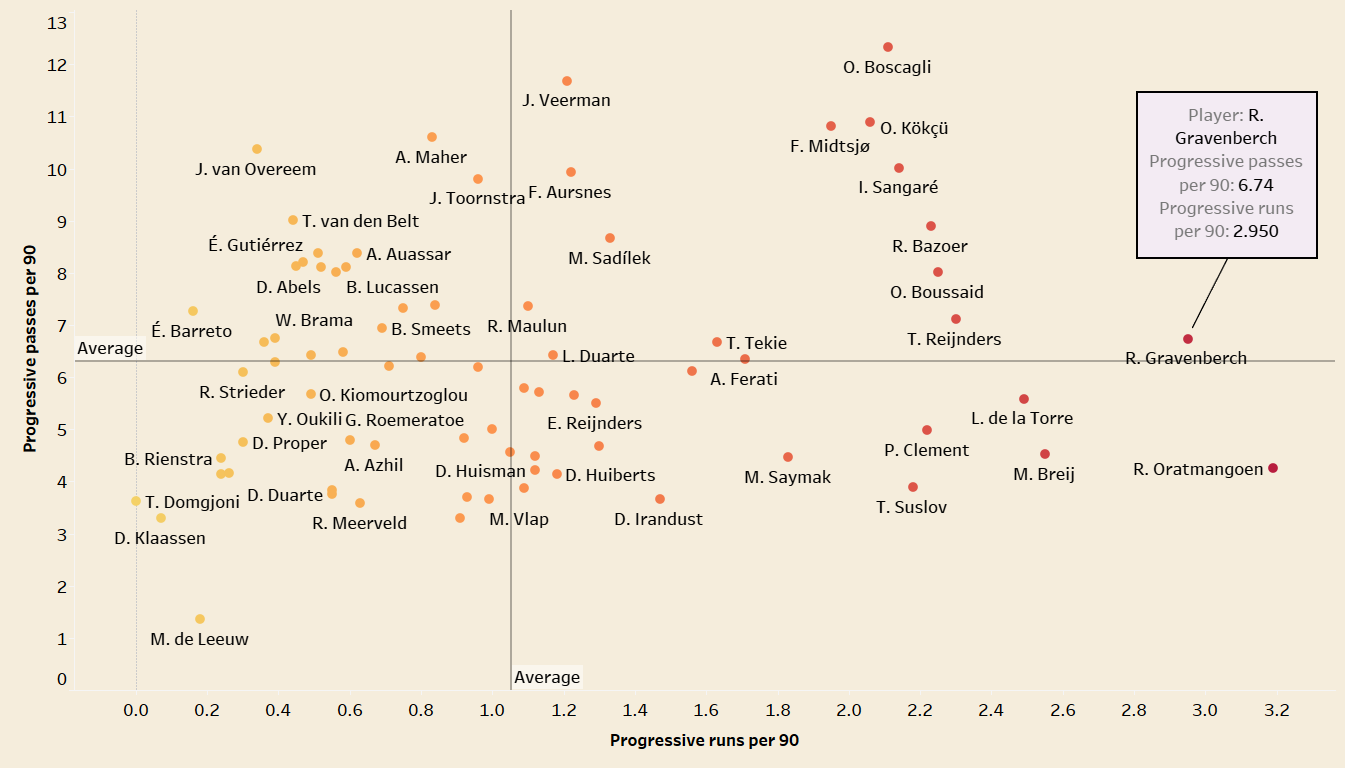 If you were to just look at his progressive passing you would be slightly concerned however he does counter this with an impressive amount of progressive runs. 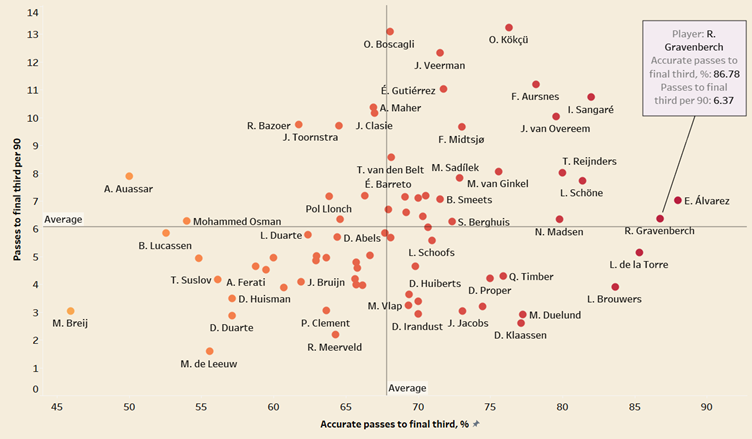 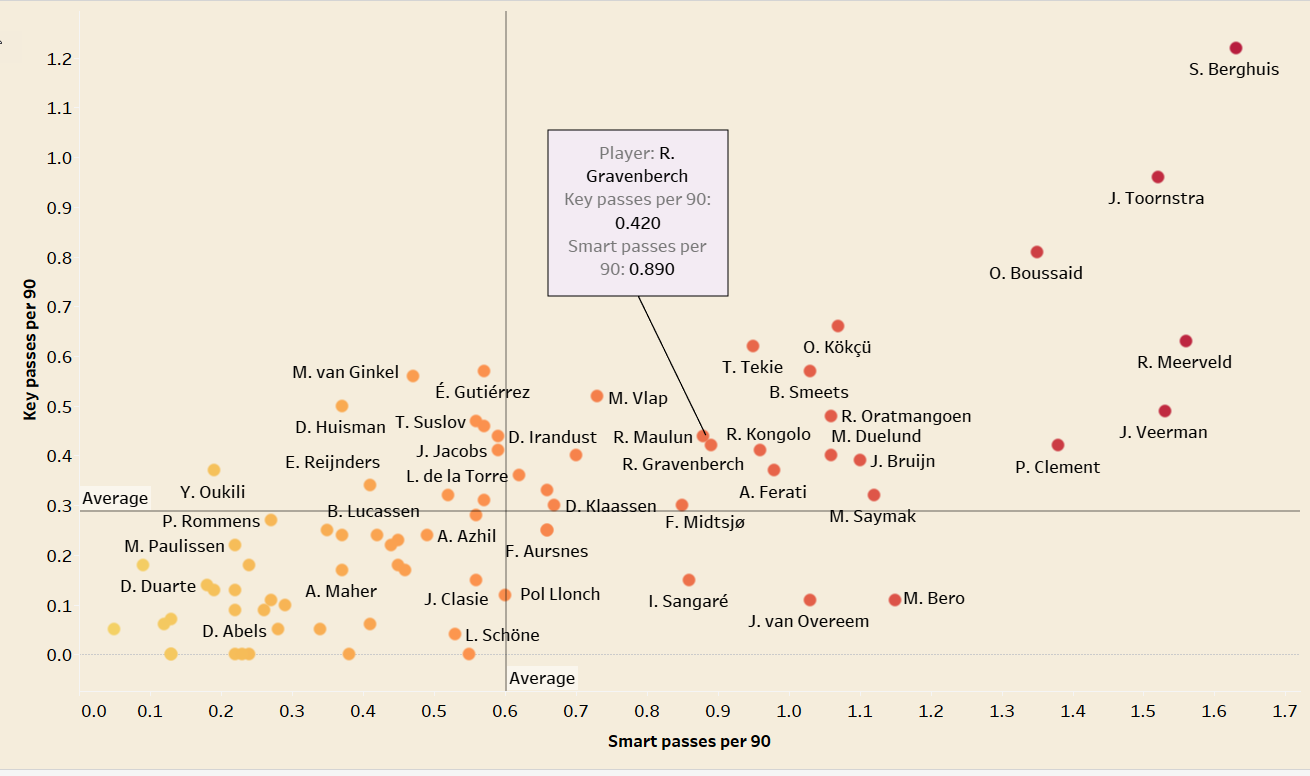 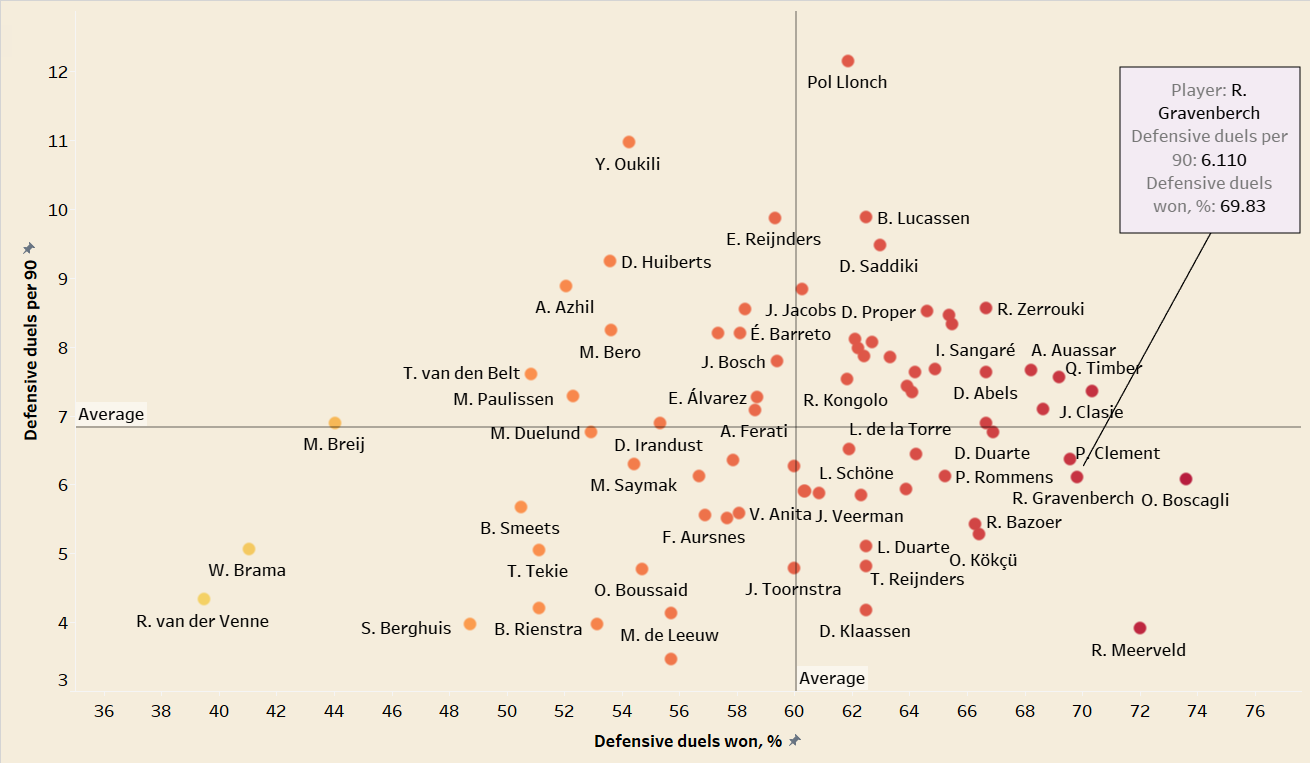 The final data we will look at shows possession adjusted interceptions and successful defensive action per 90 which will give us more of an understanding of the level of contribution Gravenberch makes out of possession. Gravenberch makes an effective contribution with 6.6 PAdj interceptions and 8.4 successful defensive actions but isn’t amongst the highest in the league. 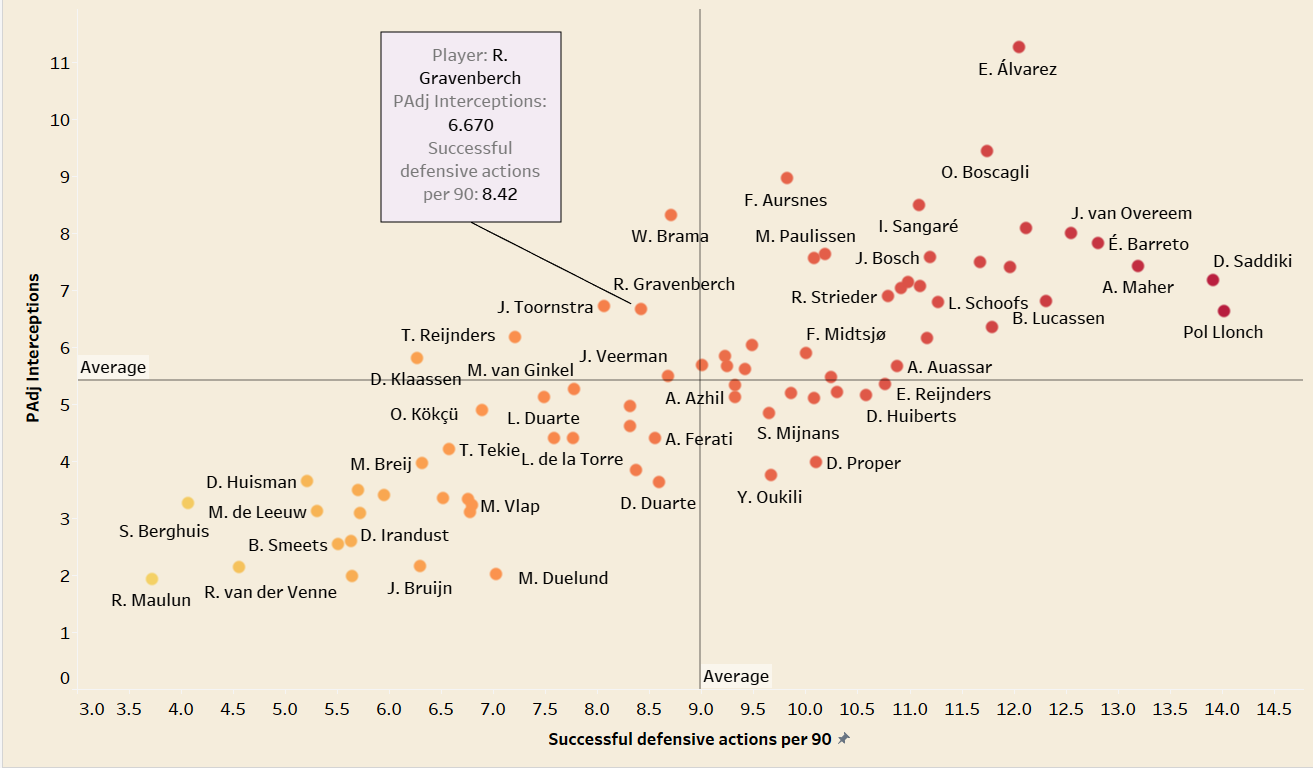 Hopefully, this data has given more of an indication of the type of player Gravenberch is but also how he performs amongst the other Eredivisie midfielders. Gravenberch does make an effective contribution, in and out of possession, however, he doesn’t excel in all areas, and the extent to which his data performance is better than other top Eredivisie midfielders, like Joey Veerman, Orkun Kokcu and Edson Alvarez, is to be determined. A more traditional analysis should help us answer this question.

When watching Ryan Gravenberch one of the standout features of his play, is the way he utilises his body. Standing at around 6ft 3, he uses his big frame to pin and manoeuvre defenders and this can provide a significant advantage. This is especially useful in the final third when spaces are tighter. The below example shows Gravenberch using his body brilliantly. Antony has just played the ball infield to Gravenberch, he goes to receive the ball off his front foot but pins the defender who has got very tight and receives the ball off his back foot.

He then opens himself up into the space highlighted and plays a pass to the on running Dusan Tadic. Tadic carries the ball into the box and scores for Ajax in the UEFA Champions League.

He also uses his physical presence when carrying the ball, as we showed in the data analysis Gravenberch is excellent in progressive runs. In this example, Gravenberch has just received the ball in his own half of the pitch and has little space to operate in, as shown.

To lose the Benfica defender, Gravenberch stops with the objective of the Benfica man lunging into a challenge before taking the ball away from him quickly, demonstrated here.

Gravenberch then carries the ball all the way to the edge of the Benfica box before releasing a teammate.

If we are being critical of Gravenberch, for him to play for a side like Real Madrid he needs to improve his accuracy and quality in the final third. His passes can sometimes be sloppy and wasteful. Both the accuracy of his smart passes and through passes are below average. Here Gravenberch has just received the ball deep in his own half. He is going to execute a brilliant run and take the ball into opposition territory. 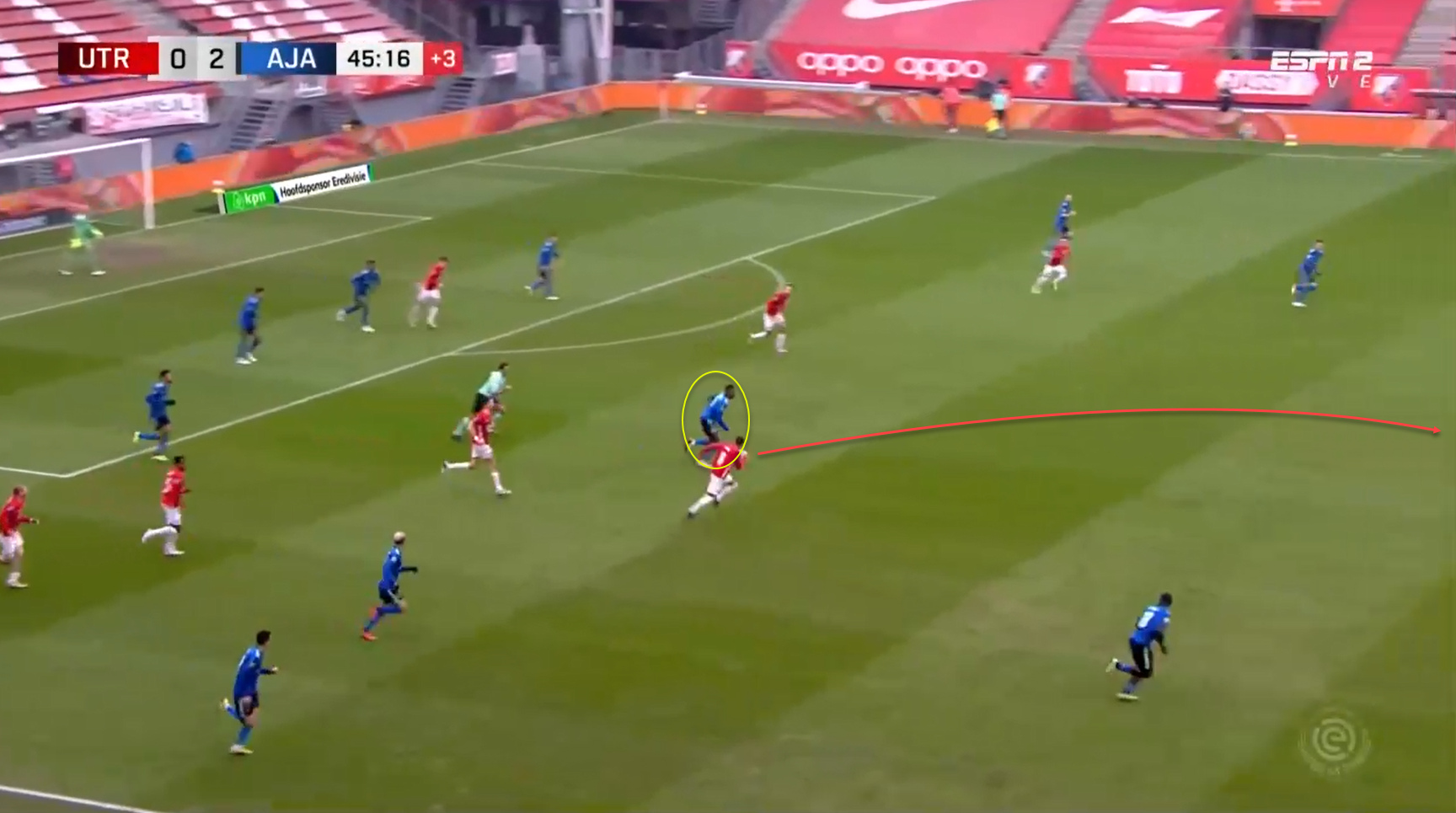 However, when he gets the ball into opposition territory, his pass lets him down. He hits a pass that is neither for Tadic nor Brobbery and the opposition turn the ball over. 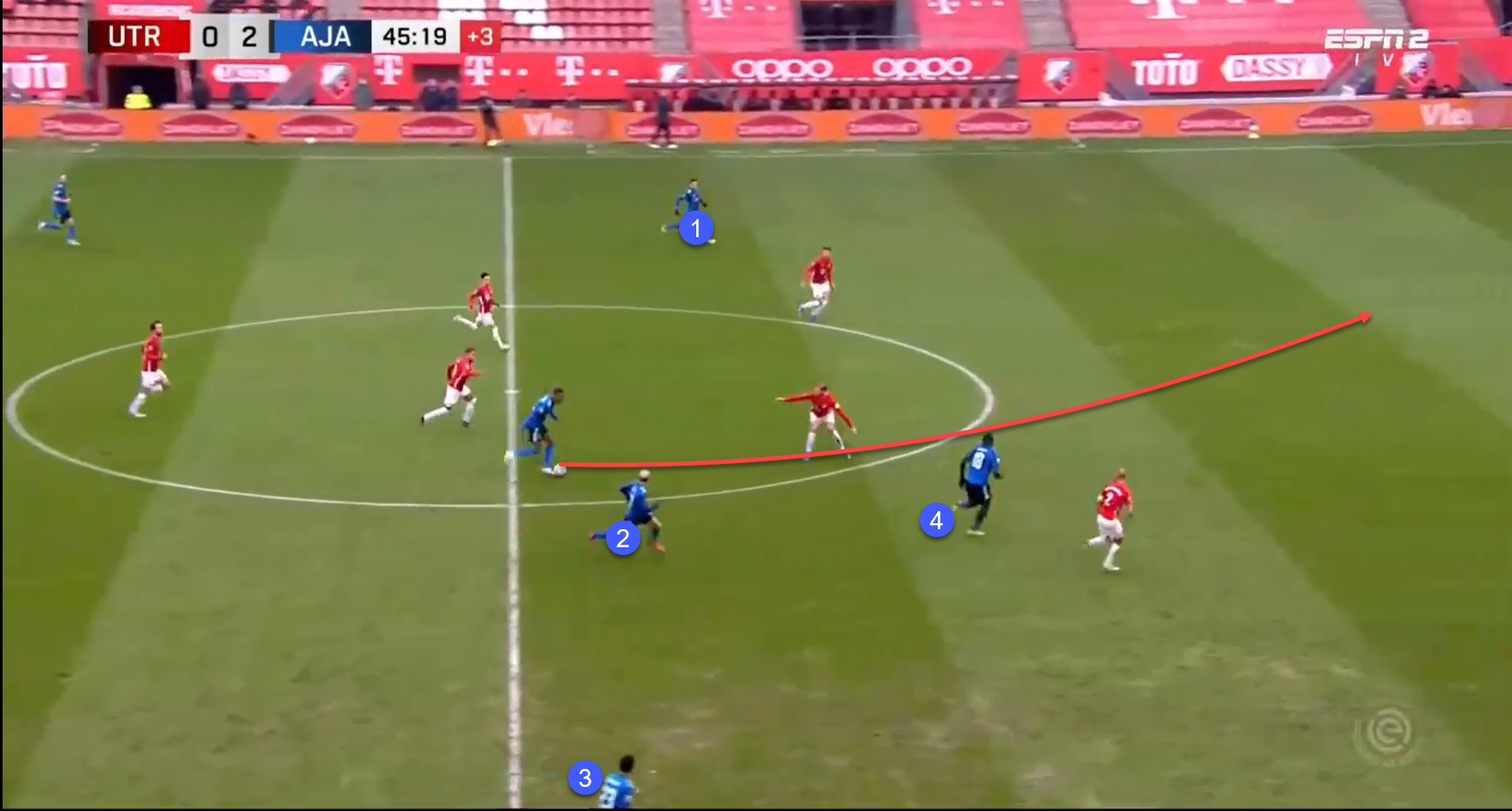 Gravenberch still makes a very effective contribution in possession and the fact Gravenberch has the ability to make this run shows his quality but in order to take the next step, he may need to tidy up his final pass.

Below shows PSV on the attack, Gakpo is going to play a ball into the highlighted space for Götze to receive. Gravenberch identifies this and makes a run to close down the space.

On Götze’s touch, he manages to tackle him and turn the ball over. He utilises his long frame to lunge around Götze and prevent him from carrying the below, as demonstrated here.

This leads to an Ajax turnover in a dangerous position for the opposition.

To answer the question I proposed in the introduction, the answer is yes and no. Gravenberch definitely has the raw materials and the ability to become a Real Madrid player – he has excellent both physical and technical skills which will allow him to go to the very top and hopefully this analysis had demonstrated that. However, he still has some development to undertake. He tends to be sloppy and drift in and out of games. In addition, to needing to improve his final pass. This must all be prefaced with the fact Gravenberch is still 19 and very few if any players at that age are the finished article. Considering his current ability and the potential he possesses he certainly has the ability to make the step up in the future.