Quick transitions and the 2-3-5: What to expect from Terzić and Pep with all to play for in the second leg

After a gripping first leg at the Etihad, Manchester City travel to Dortmund for the second leg of their UEFA Champions League quarter-final tie. The Premier League leaders lead by a goal, thanks to Phil Foden’s late winner but with Marco Reus having snatched a crucial away goal for Dortmund, the 2-1 scoreline from the first leg means that it is all to play for at the Westfalenstadion. In this tactical analysis, we will preview this fixture and our analysis will show us what tactics to expect from Edin Terzić and Pep Guardiola. 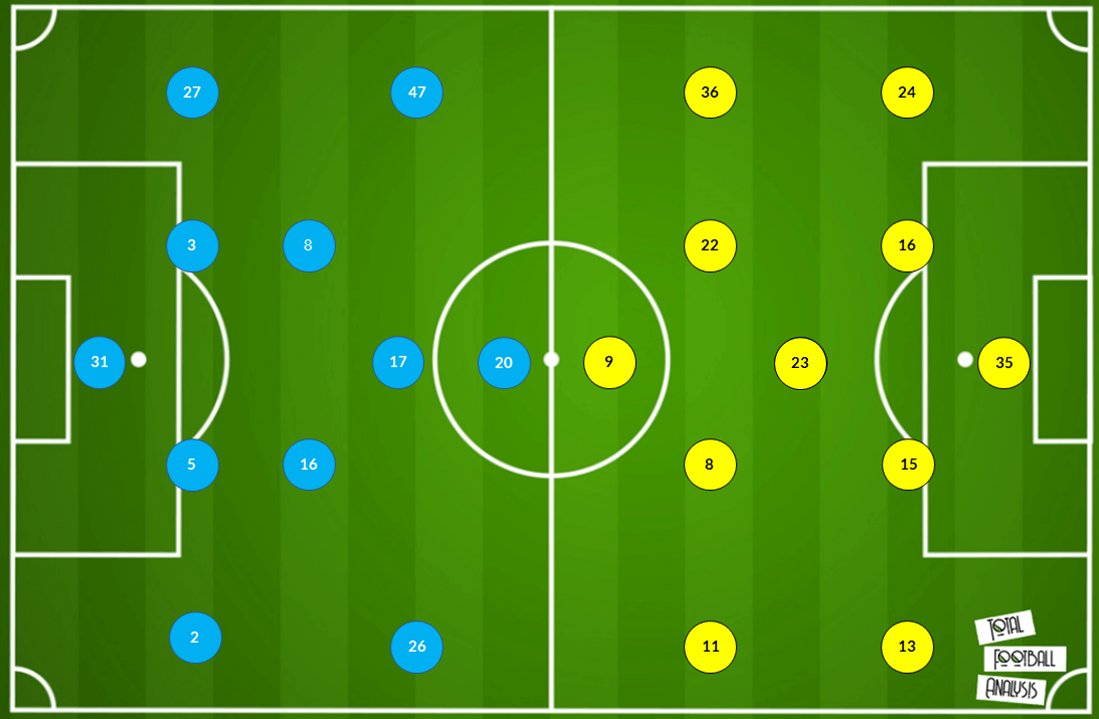 We predict the hosts to line up with nearly the same line-up as last week, with Thomas Meunier replacing Mateu Morey. The latter had started last week’s fixture but was replaced by Meunier later on and we expect Terzić to start the more experienced Meunier for this crucial second leg. We expect the rest of the defence to remain the same with Marwin Hitz in goal, Manuel Akanji and Mats Hummels at centre-back and Raphaël Guerreiro at left-back.

We also expect the midfield and attack to remain the same with Mahmoud Dahoud, Emre Can and Jude Bellingham the midfielders and Reus, Erling Haaland and Ansgar Knauff the attackers. Reus is an injury concern heading into the game but still looks likely to make the eleven and we also expect Knauff to start once more despite being taken off last week, owing to his impressive performance and goal at the weekend.

As for the visitors, we see them going with the exact eleven as last week. Ederson starts in goal with Kyle Walker at right-back, pushing João Cancelo to left-back. The partnership of John Stones and Rúben Dias should start at centre-back and we expect Rodri, Kevin De Bruyne and the impressive İlkay Gündoğan to start in midfield, the latter returning to his old stomping ground. As for the attackers, we expect Phil Foden and Riyad Mahrez to operate as the wingers and Guardiola to go with Bernardo Silva as the forward on paper in what would mostly be a fluid positional play. 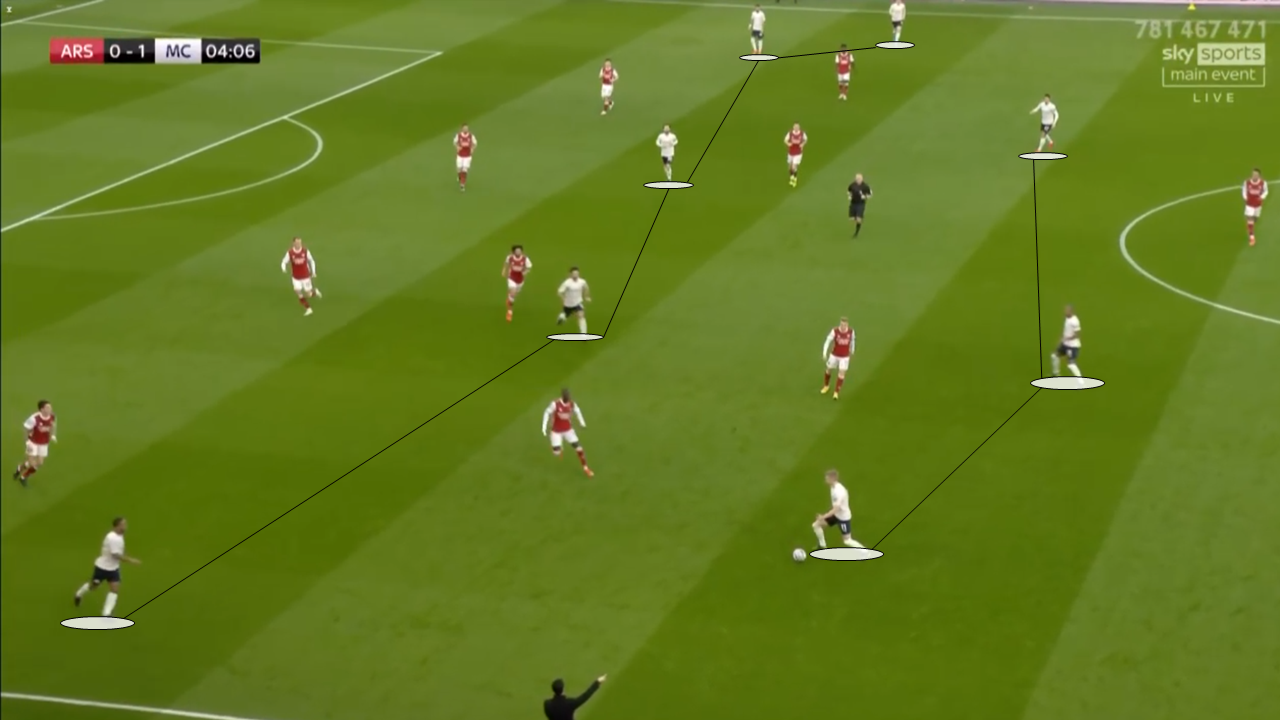 As always is the case with City this season, expect them to dominate possession and impose themselves on the game early on. Settling into a 2-3-5 set-up, pushing the full-backs into midfield and Gündoğan and De Bruyne into the attack. We can also expect City to look to stretch Dortmund, as they did against Arsenal as shown above. Mikel Arteta’s side had set out to defend deep against City earlier this season, but Guardiola’s side held their width and stretched their opposition across the pitch, creating larger gaps for their central attackers.

This specifically allows the likes of Gündoğan and De Bruyne to operate in larger pockets of space in the middle and they can find more time to pick out their next pass, a very dangerous tactic especially considering the passing ability of the Belgian. The pair can also work their way into the half-spaces more effectively and enable City to have better ball rotations down the wings leading to the central areas. We did see an example of this last week, with City moving to the 2-3-5 formation in possession. Dortmund, however, remained very compact as they looked to frustrate their opposition and settled into a 4-5-1 shape with the defence and midfield line close to each other, minimising the pockets of space available to the City players. Guardiola’s side was probably not as efficient in holding their width in this game and hence had to resort to cycling possession with their lines of two and three in order to find an opening. Hence, expect the visitors to stretch Dortmund more often in this second leg and maintain the bulk of possession. An important part of Dortmund’s tactics in the first leg was the use of star striker Haaland as a focal point of attack. The Norwegian would often be the sole attacker, with his side seeing considerably lesser possession, and when they won the ball back, Dortmund would look to play the pass to Haaland who would drop deeper, drag a defender out of position and hold up play long enough for his teammates to make supporting runs. This direct style of play in fact led to Dortmund’s goal last week, with Haaland’s movement dragging Stones ahead and opening the space for Reus to run in behind the defence and slot home. 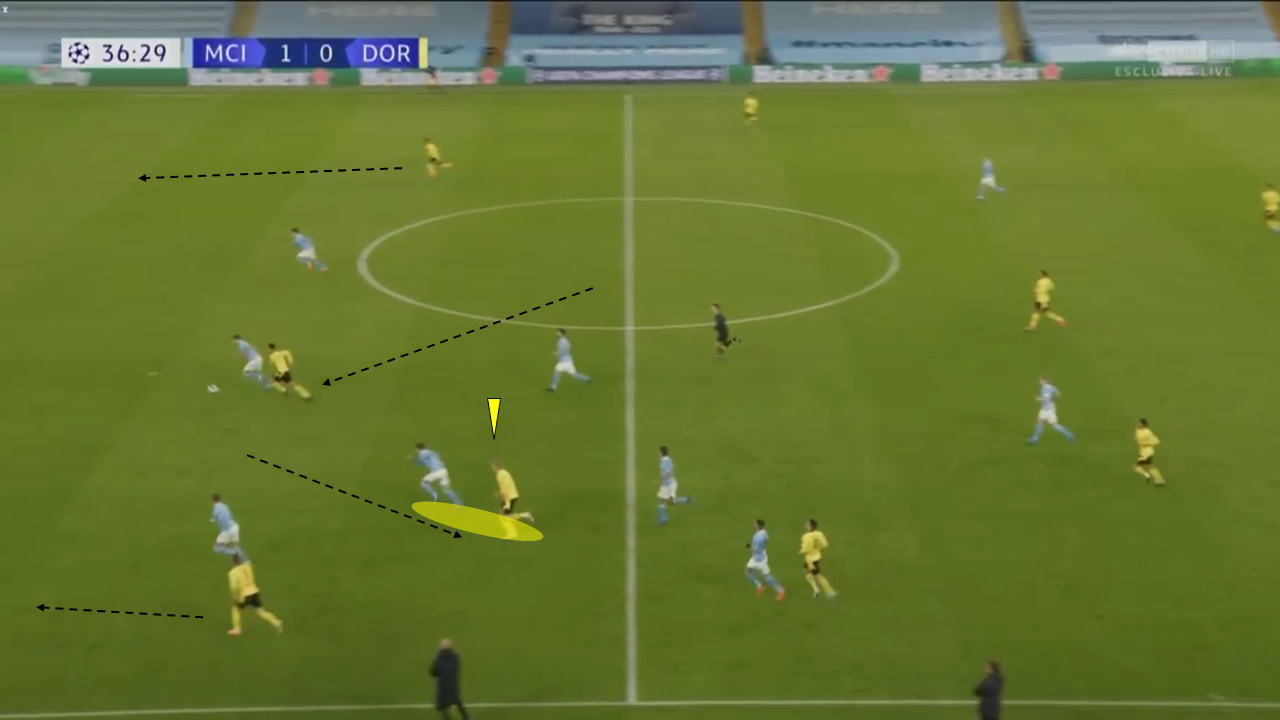 Haaland’s movement to drop deep will be crucial for Dortmund in this fixture too and the forward has impressive pace to get back in and around the box in time to support his other teammates who he has laid the ball off to. In fact, the ball does not even need to be played into him as his movement itself could open up spaces for his teammates to run into. This was something that we saw with Dortmund’s controversially disallowed goal last week, with Bellingham darting into space created by Haaland and Guerreiro could look to pick him out. Using Haaland as a pivot in attack in such a manner troubled City’s defence throughout the game and we saw the usually reliable partnership of Stones and Dias look uncomfortable at times. Hence, we expect Terzić to push for more of the same this time around as he looks to cut down the deficit as soon as possible.

Quick transitions could be City’s undoing 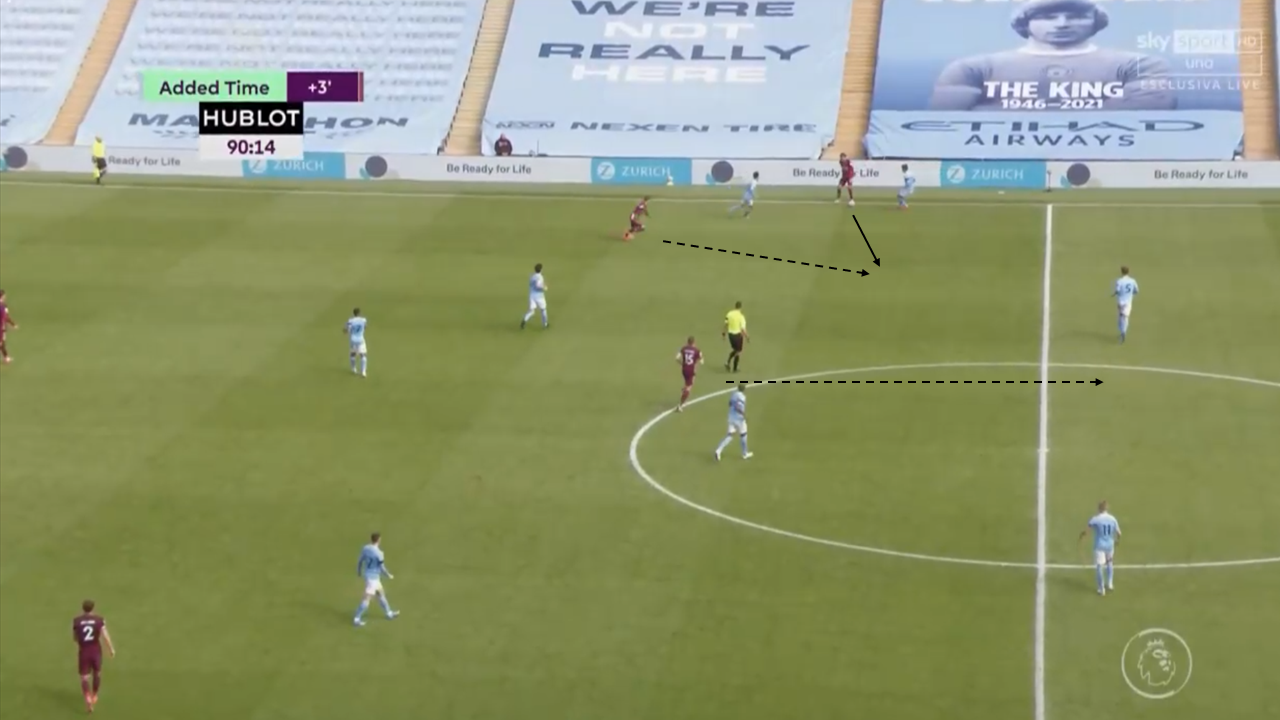 It is not often that we see a side as strong as City this season concede a late winner to a 10-men opposition, but this is exactly what happened at the weekend. Despite Leeds United’s resolute defending after going a man down, Guardiola’s side managed to equalise and heading into the closing stages were piling on the pressure on the opposition. Of course, it was a heavily rotated City side but despite that, a quick transition late on saw Leeds steal three points at the Etihad. Upon sending the ball out wide, Leeds are able to play a simple pass to bypass the City defenders and move centrally and with Stuart Dallas providing an excellent run through the middle, a simple through ball can send him clear on goal to score. This was not a one-off as well, with City conceding in a similar manner against local rivals Manchester United in the beginning of March. With United playing the ball out wide, left-back Luke Shaw was able to beat his defender down the line and move centrally while effectively bypassing City’s midfield line. His teammates could also get up in support in numbers and the City defence was unable to regroup in time, leading to Guardiola’s side conceding from a quick transition yet again. 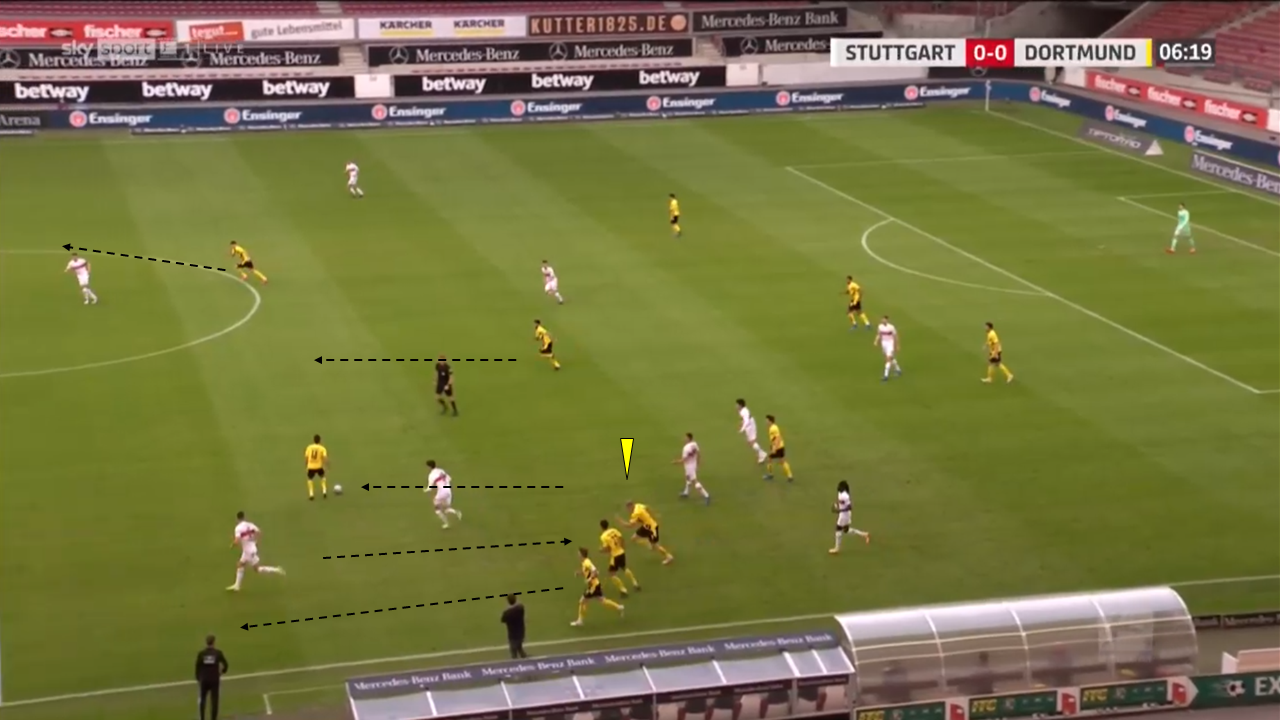 This would be interesting for Terzić as his Dortmund side are effective in their quick transitions as well. The game against Stuttgart over the weekend showed signs of this, with Dortmund able to overload the wing and then cycle possession centrally before quickly transitioning to the opponent’s half. It is interesting to note Haaland’s involvement in this as well, as he drags his defender out of position while involving himself in the play and enabling his side to transition quickly across the pitch. We saw earlier that Dortmund’s plans last week revolved around the use of Haaland as a pivot to start their attacks and if they can be more efficient from these transitions starting out wide to City’s box then they could find themselves right back in the tie. This may just be Dortmund’s best shot of a goal as it has been shown just how effective it can be against this City side.

While City lead this tie heading into the second-leg, they still need to find a goal to rule out Dortmund’s vital away goal advantage and will push to do this early on and settle the tie as early as possible. Dortmund showed great discipline in their defence last week but still conceded twice with one of those being an error from Can and this is something that they cannot afford once again this week. It almost seems like whoever scores first decides how the game will go, with the likes of Bellingham and Haaland crucial to the home side’s chances as they push for the early goal to draw level on aggregate but with Guardiola chasing an elusive Champions League title with City, this is easier said than done with the likes of De Bruyne and Gündoğan spearheading the attack.

This tie is by no means over and despite the advantage that City have, we still feel Dortmund have what it takes to make this a closely fought game. 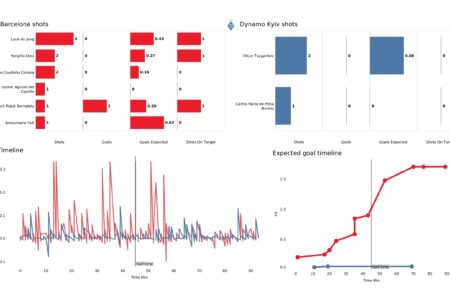 Wednesday night saw Barcelona get their first win of the campaign against Dynamo Kyiv in the Champions League. We’ve broken down […] 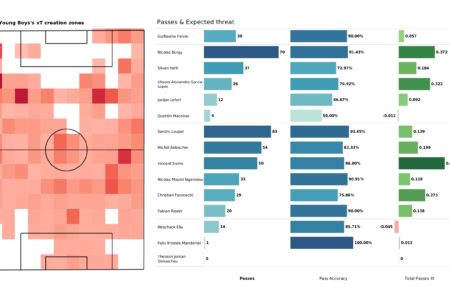