Quick breaks and defensive organisation: How Poch and PSG held on to go through to the semi-final

On Tuesday evening, European giants PSG and Bayern Munich met in the second leg of their Champions League quarter-final tie. Having won the first leg away from home in a drama-filled 3-2 win, PSG knew they would have to prevent Bayern’s attack from hitting its stride in this home leg. And that’s exactly what they managed to do, restricting Bayern to a 1-0 win which left Paris moving forward to the semi-final thanks to the away goals rule.

This tactical analysis will give an in-depth analysis of the tactics used by both Mauricio Pochettino and Hansi Flick in this closely fought tie.

Whilst the official line-ups show PSG operating in a 4-2-3-1, their overall shape was a culmination of things, sometimes looking more like a 4-2-2-2 than a 4-2-3-1 with Di María and Mbappe pushing high and wide, whilst out of possession they operated in a 4-4-2 which moved into a 4-4-1-1 mid-to-low block as Bayern progressed possession.

Bayern on the other hand operated in a more defined albeit slightly lopsided 4-2-3-1, with Alphonso Davies pushing on far higher than his right-back counterpart Benjamin Pavard. 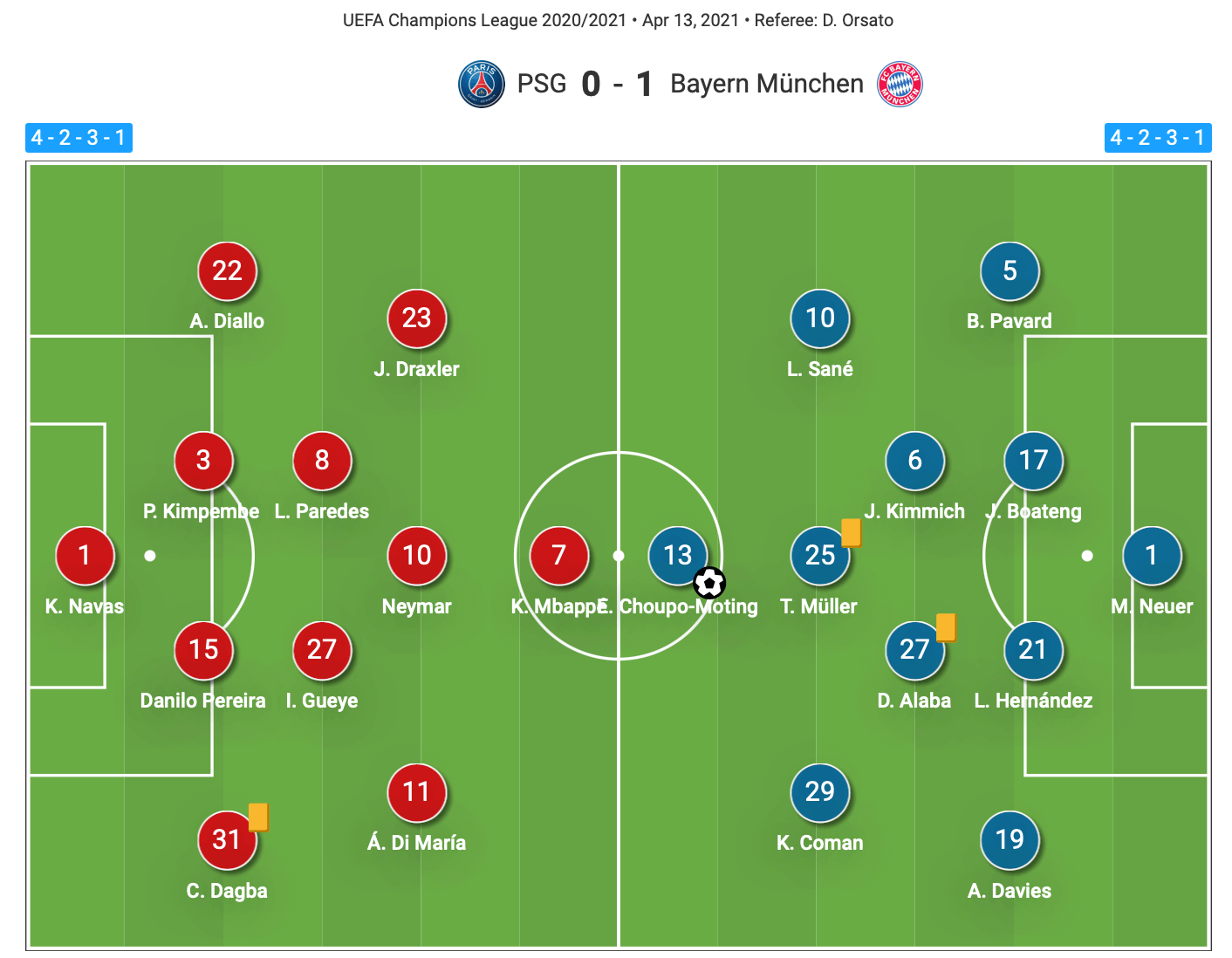 Paris could potentially count themselves lucky to just concede two, as similar to the first leg, Bayern underperformed against their xG, scoring once despite registering an xG of 2.04. PSG could only restrict the visitors to 13 shots, and Bayern hit the target with five of these efforts.

Nevertheless, they set out to present an organised and structured 4-4-2, with very little in the way of any pressing occurring, as their 15.39 PPDA testified. 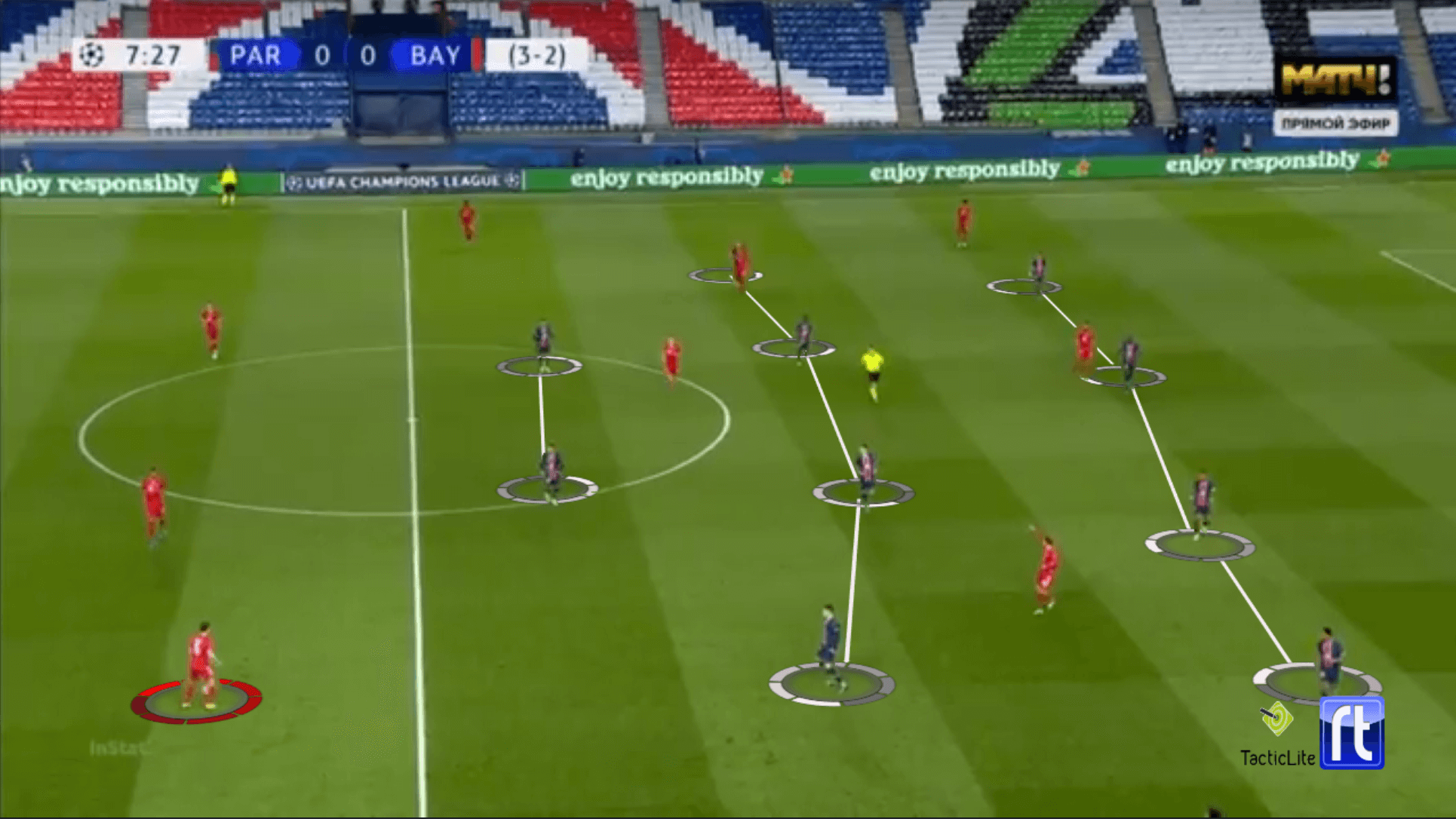 Whilst their back four and midfield four stayed compact, looking to give little to no room away in between the lines, Neymar would drop in between Mbappe and the midfield. With Mbappe staying high, Bayern had to constantly be wary of the threat of a long clearance, and despite Manuel Neuer’s outstanding skill as a sweeper-keeper, Jerome Boateng and Lucas Hernandez would have had very little interest in entering into a footrace with the PSG forward.

However, Neymar’s positioning, seen below, was such that he would be well situated to latch onto any clearances from his midfield or defence and immediately begin the counter-attack. Such is his brilliance as a dribbler, along with his pace and understanding with Mbappe, that Neymar was dropping in less to give defensive support, but more so to be close to any loose balls in order to begin the counter. 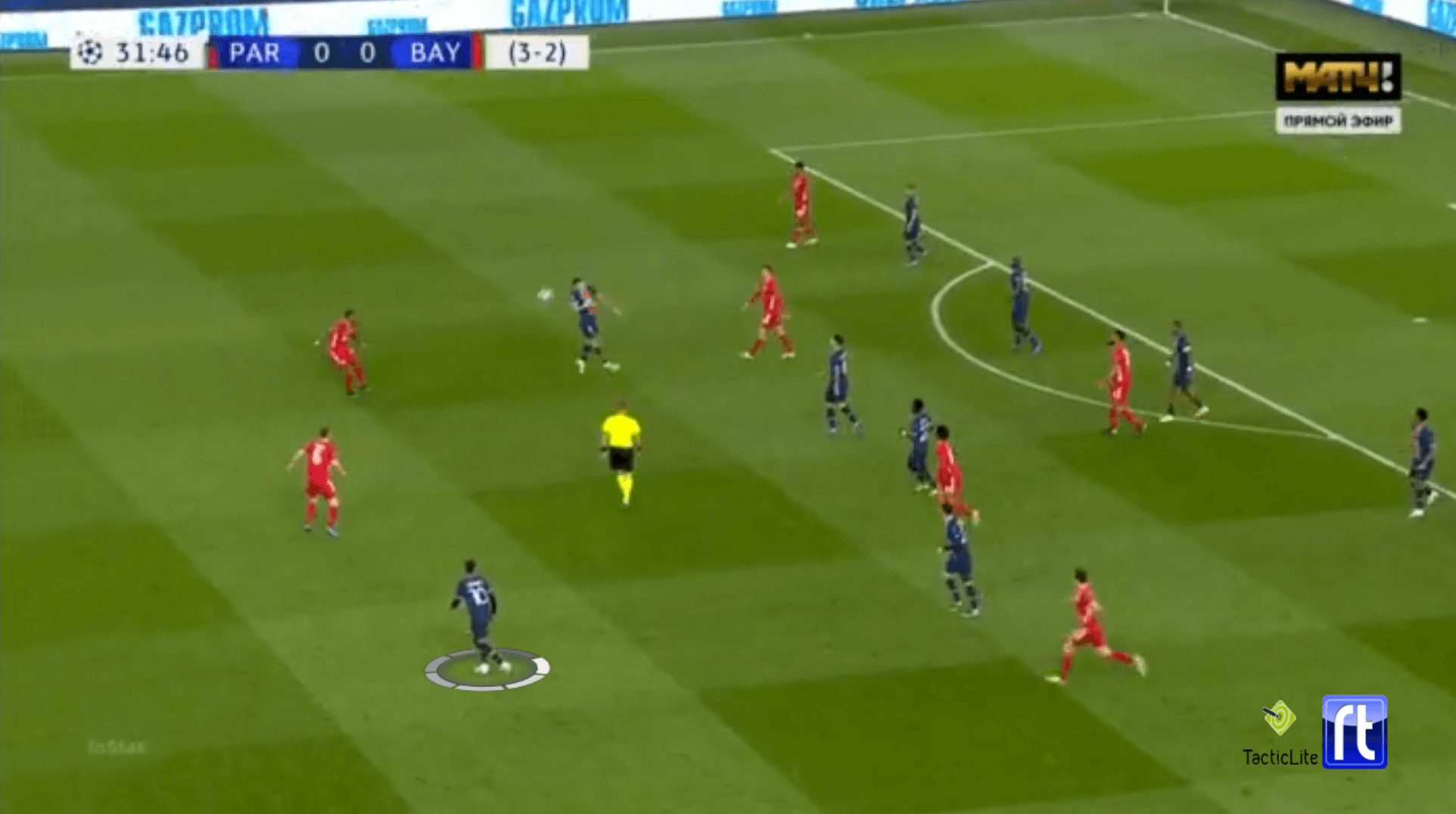 Whilst it’s true that PSG didn’t look to press with any great intensity throughout the game, the narrow positioning of Mbappe and Neymar had to be handled carefully as Bayern looked to build from the back. Should they lose possession with their two centre-backs looking to play out, and with both full-backs high and wide, they could be caught out easily on the counter. To prevent this and aid easier build-up, Bayern looked to build up with a back three. This could be done like in the image below where Pavard stayed narrow, letting Davies push forward, but Kimmich and David Alaba dropped into the full-back position on plenty of occasions, allowing both Pavard and Davies to push up. 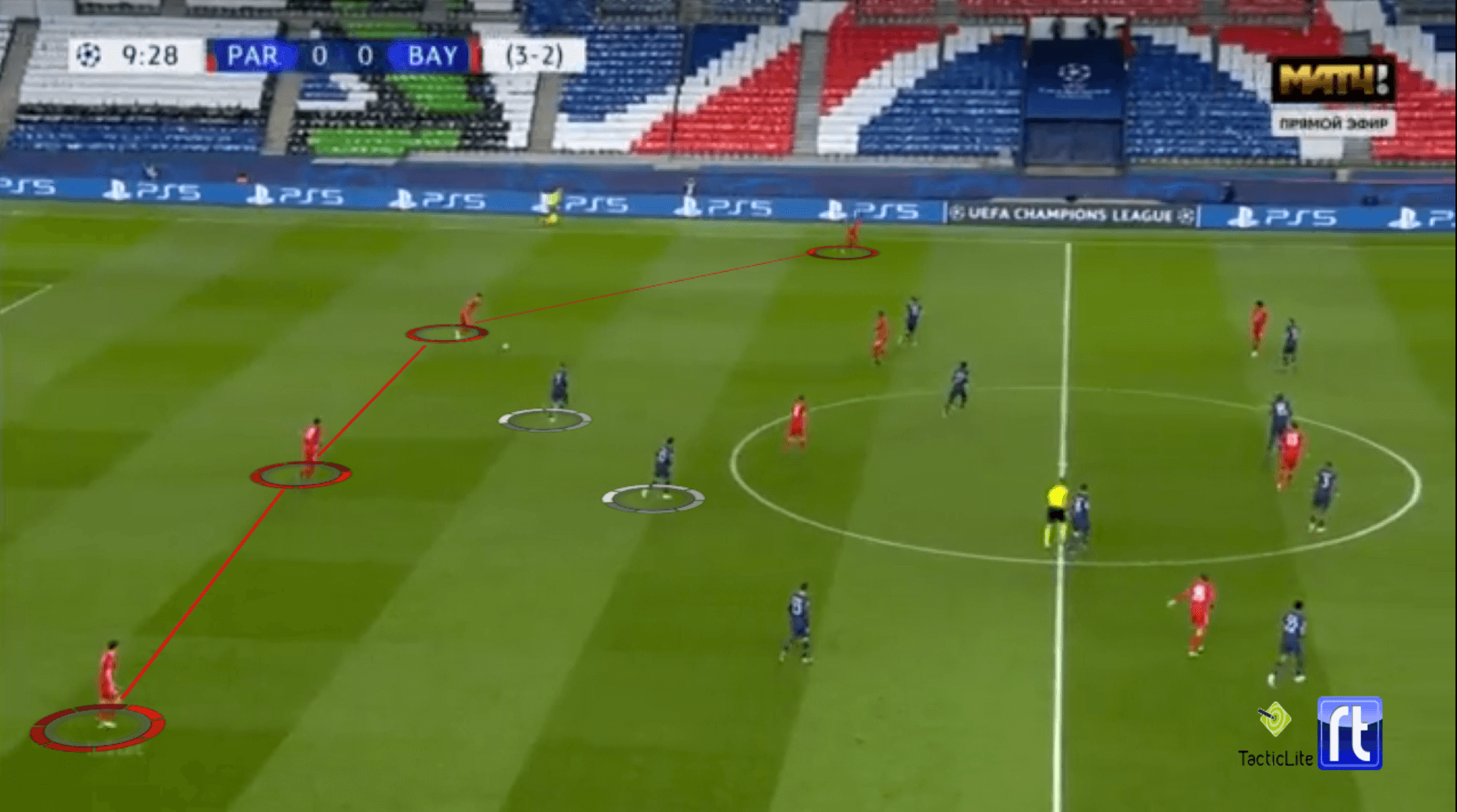 On paper, Müller would sit in front of Bayern’s double pivot, and whilst he certainly did that, anyone who has seen Bayern and Müller play will know that he operates with a licence to fill spaces as he sees fit. Bayern were aggressive in looking to push three or four attackers forward at once to pin back PSG’s back four and create even more space out wide, and as such Bayern’s double-pivot of Alaba and Kimmich could struggle to find any great space in the midfield, particularly in between the lines of PSG’s midfield and defence.

To combat this issue, Pavard would often drift inside himself, as in the image below. 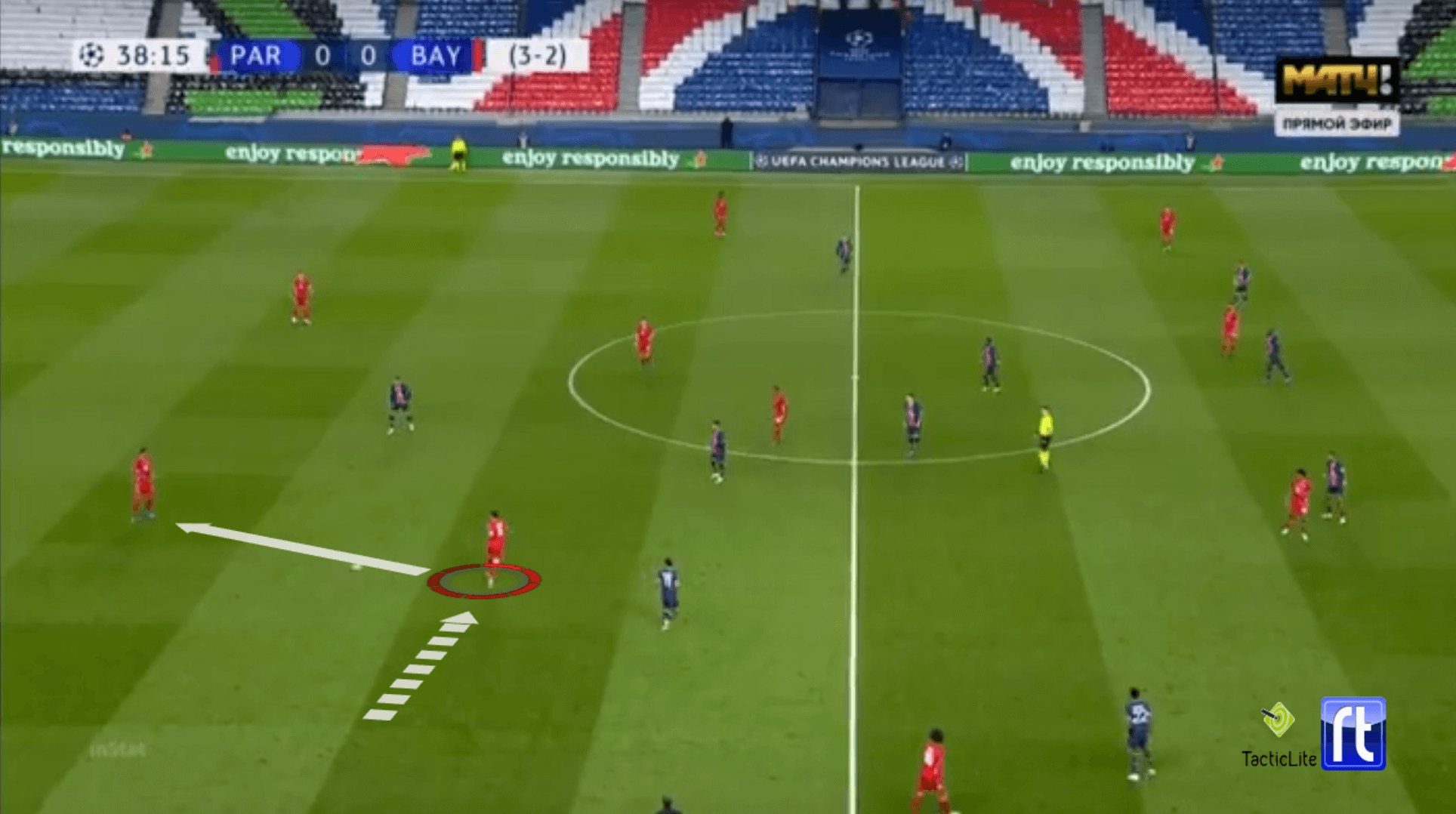 In response to this, one of Bayern’s central-midfielders was then able to push forward, drifting into the space between the lines, and all the while Bayern could maintain a solid double-pivot. We can also see the passing line open for Boateng to Sané on the right-side as a result too. 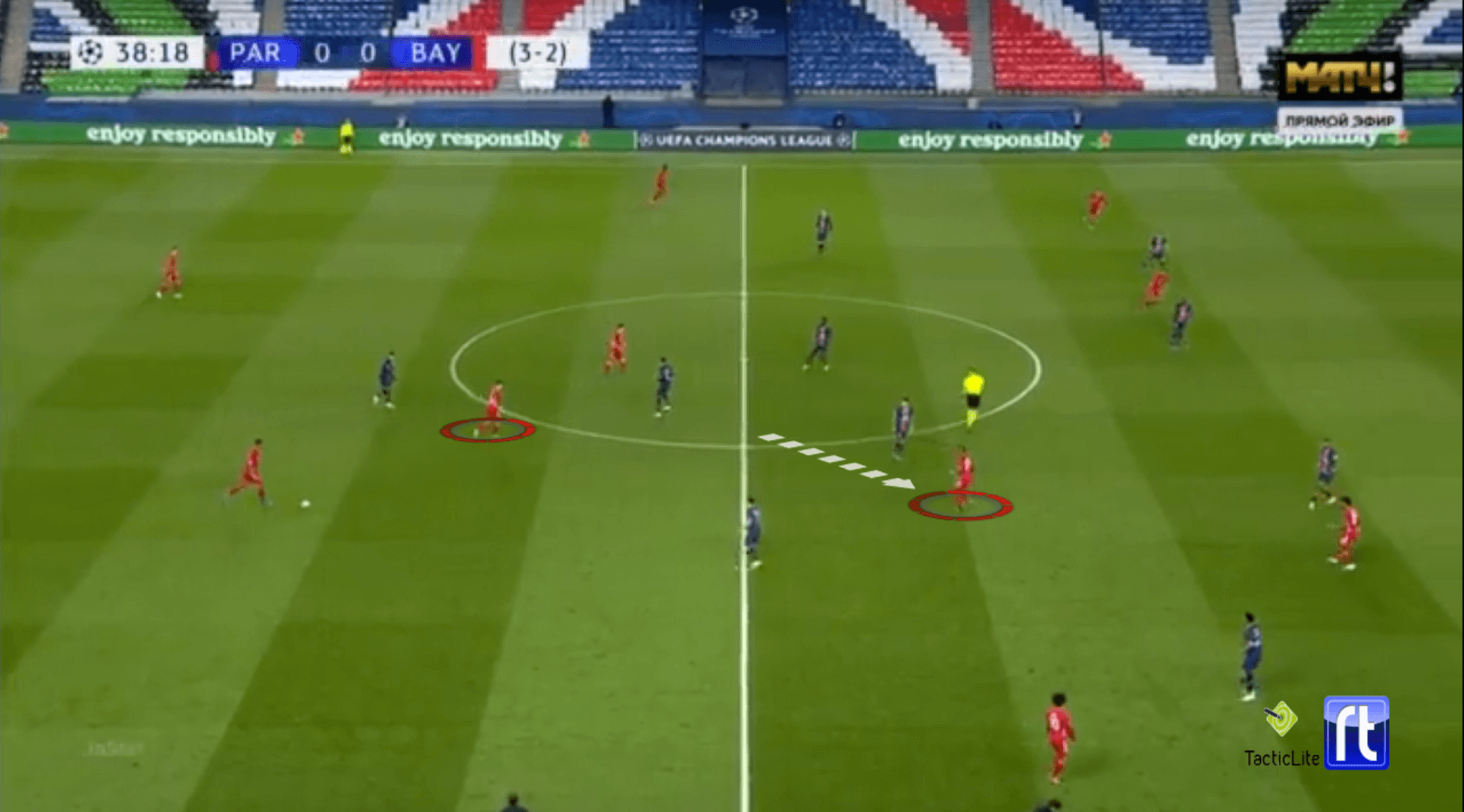 Finally, and as a nice segue into our next section, Bayern looked to begin to target drawing out PSG’s defenders by positioning players in difficult areas to defend. We can see the occupation of the half-space below and how it presents difficult questions for PSG’s defenders. 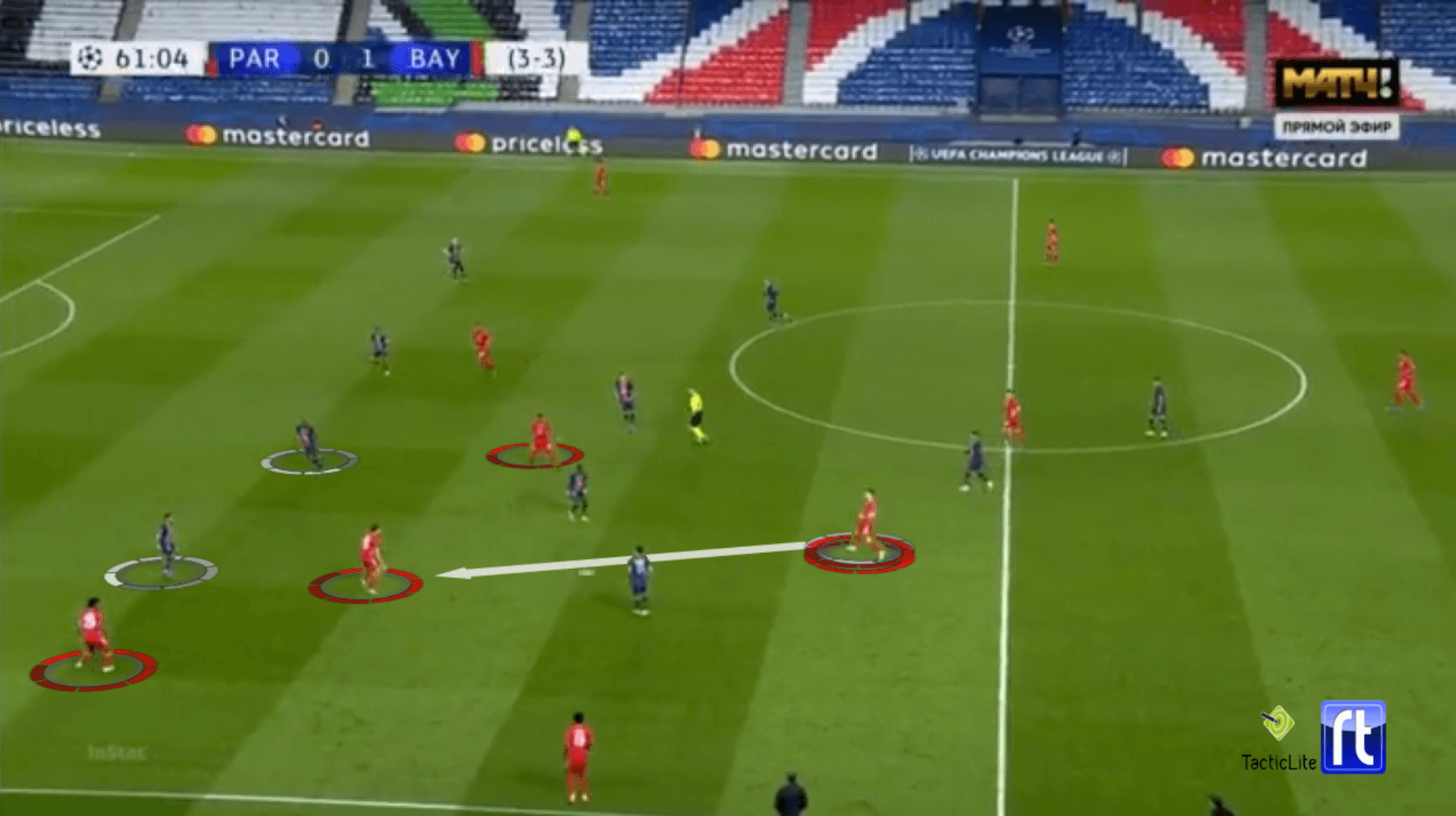 Should the right-back, Dagba, push forward, it creates space for Coman on his shoulder, whilst if Danilo Pereira were to push up then Alaba, positioned between the lines, would be able to run into the space vacated by the centre-back.

Bayern looked to consistently stretch the hosts as much as possible, with Sané and Coman, or Davies, always looking to hug their respective touchlines. In doing so they looked to draw PSG’s full-backs out and hit the space in behind.

They would either look to find these players directly with long, searching balls from either of their centre-back duo, or Kimmich or Alaba should either drop into the full-back position to do so themselves. 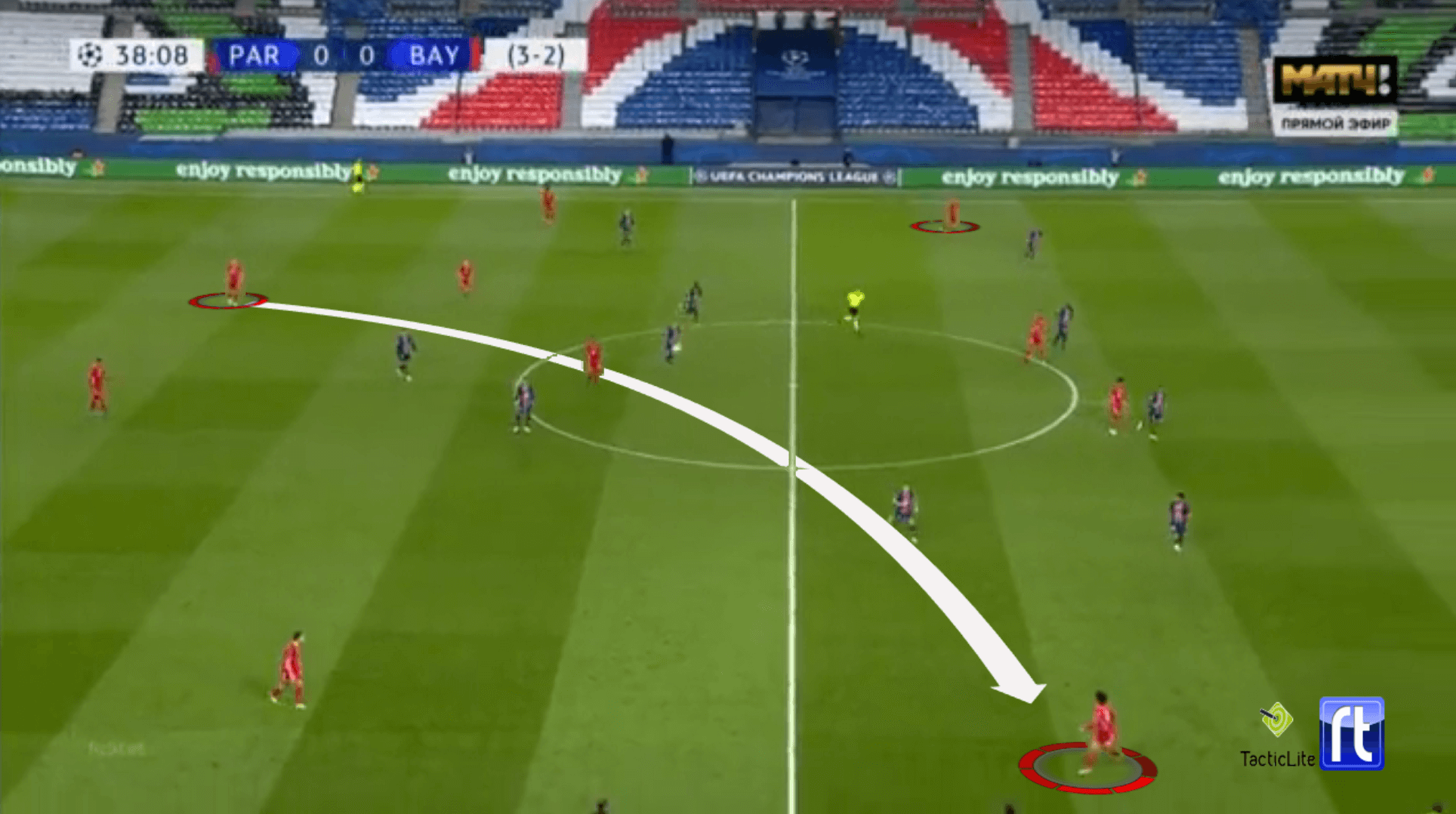 They would also look to find the players with flatter passes. These would only occur should either Maxim Choupo-Moting or Müller be in a position to drag one of the PSG centre-backs forward, such as below. In doing so, they created enough space for one of the wingers to cut inside to behind, to latch onto the lofted through pass. 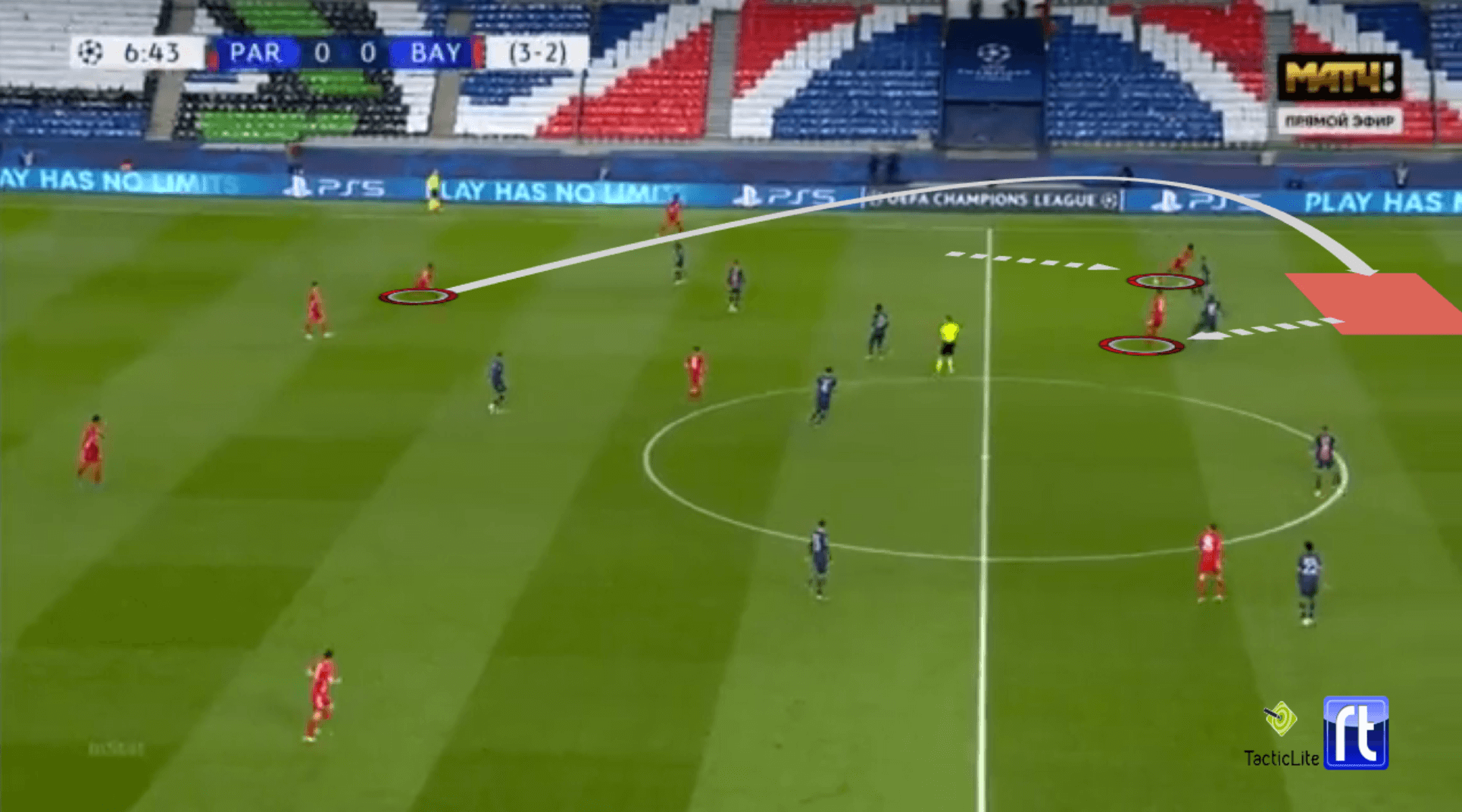 Similarly, the height and width provided by Bayern’s wide players also created opportunities for runs from Bayern’s midfielders beyond the lines. Should one of PSG’s full-backs be drawn out, like Colin Dagba is doing in the image below, there would be space for a midfielder to run into the half-space. This is only possible due to Choupo-Moting’s positioning on the shoulder of PSG right-sided centre-back Danilo Pereira. Due to Choupo-Moting being in this position, Danilo Pereira could’t immediately shift across to cover the run in behind. Again another variation of looking to manipulate the positioning of the full-back can be seen below. This time Sané made a move inwards, towards the ball in a bid to drag PSG’s left-back, Abdou Diallo, forwards at an angle, whilst Pavard looped around the back, looking for the diagonal through pass. 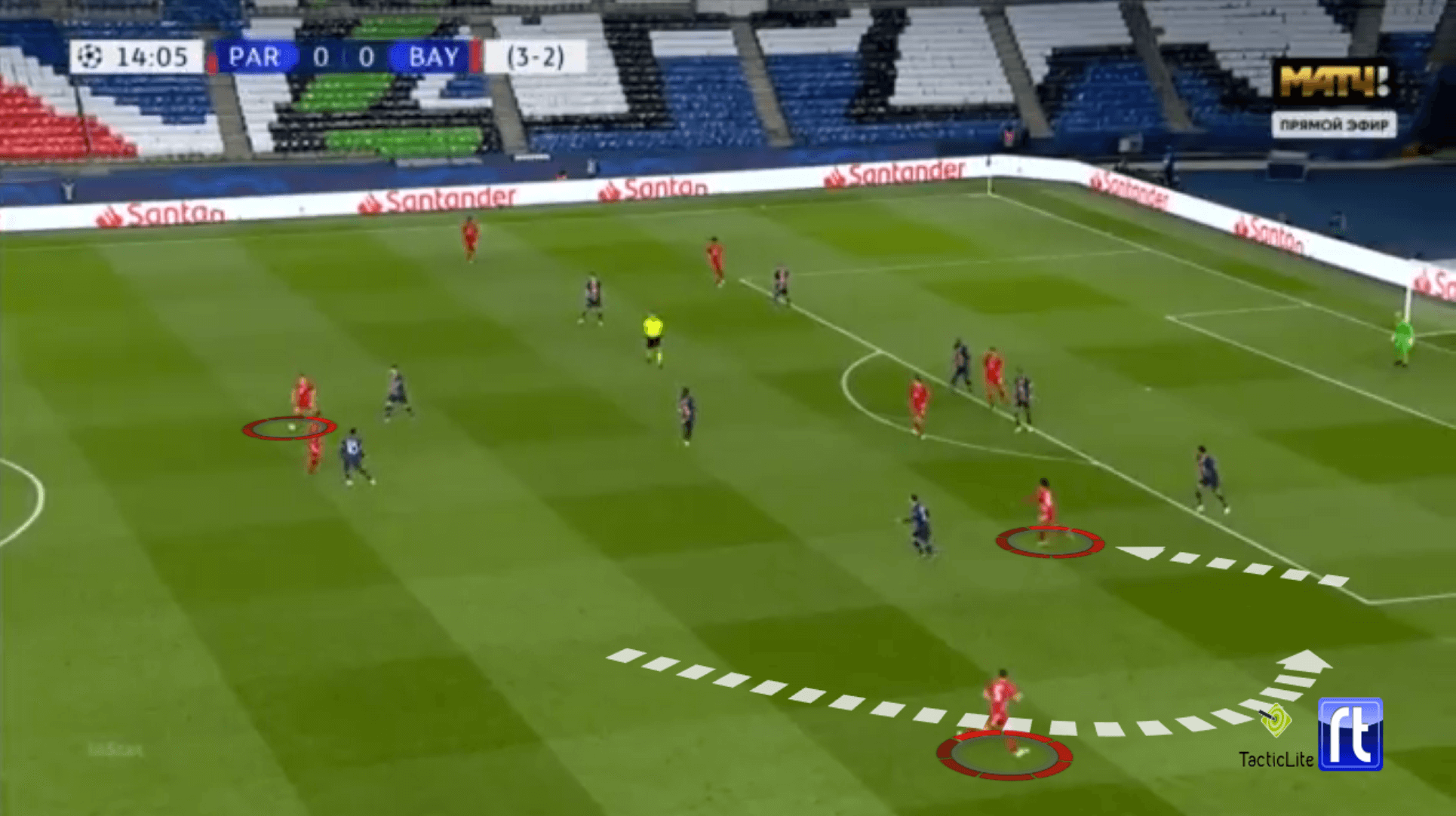 How PSG looked to find space for their attackers

PSG’s two gamechangers, and potential Champions League winners, are undoubtedly Mbappe and Neymar. And so, for Pochettino to get the best out of his side, he must get the best out of these two individuals. With opponents naturally focusing untold amounts of energy on preparing to deal with Mbappe and Neymar, it is no easy task, however, the use of swift breaks, wide positioning, combination play, and players dropping into the 10 space, certainly created enough room to cause issues for Bayern.

On top of this, Di María and Draxler pose a threat and combine with Neymar and Mbappe to create a fluid attacking group of four. PSG would position at least one of these attackers on the shoulder of a Bayern defender at all times. They would do this centrally, but from wide areas as well.

Neymar tended to drift into the 10 space, where he could pick the ball up and progress the ball as a dribbler. He would often start high, next to Mbappe, and make a late run into the 10 space, hoping to draw at least one Bayern defender forward. However, we can see how Mbappe continues to play on the last man, and with another presence out wide, finding Neymar in these spaces created opportunities where PSG could push the ball forward and quickly put the ball in behind the Bayern defence. 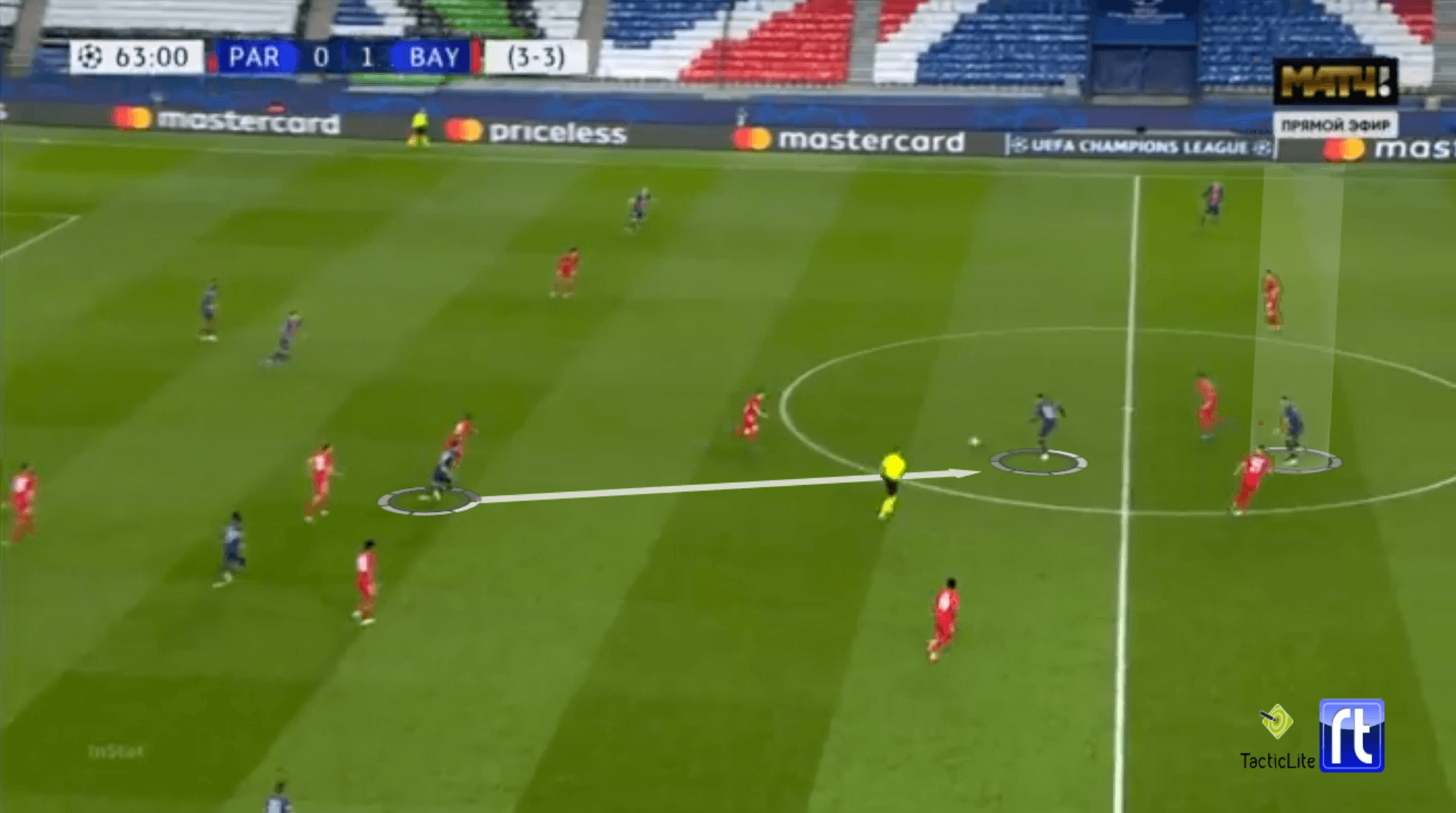 In the image below Neymar is actually deeper than Draxler who makes a run into the 10 space to receive the ball. By playing into a player in this kind of area, they also had a phenomenal chance to play an easy through pass in behind for one of their attackers. 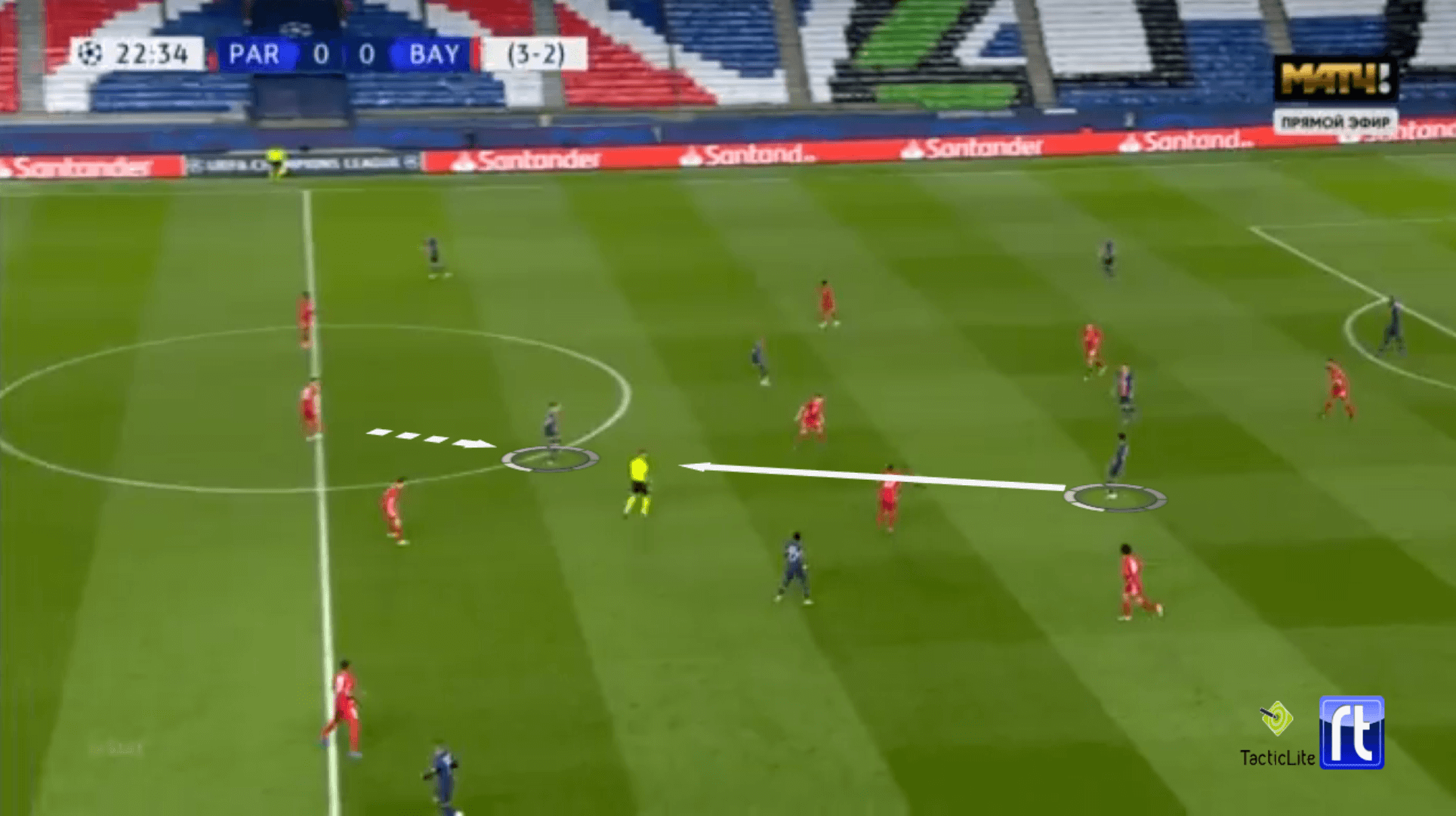 As the midfielder turned to face Bayern’s defence, we can see how both Mbappe and Di María are in terrific positions to angle their runs in behind onto a straight through pass. Regardless of Bayern’s back four being narrow, due to their flatness and the angle of the passer, there are spaces to play the pass through. 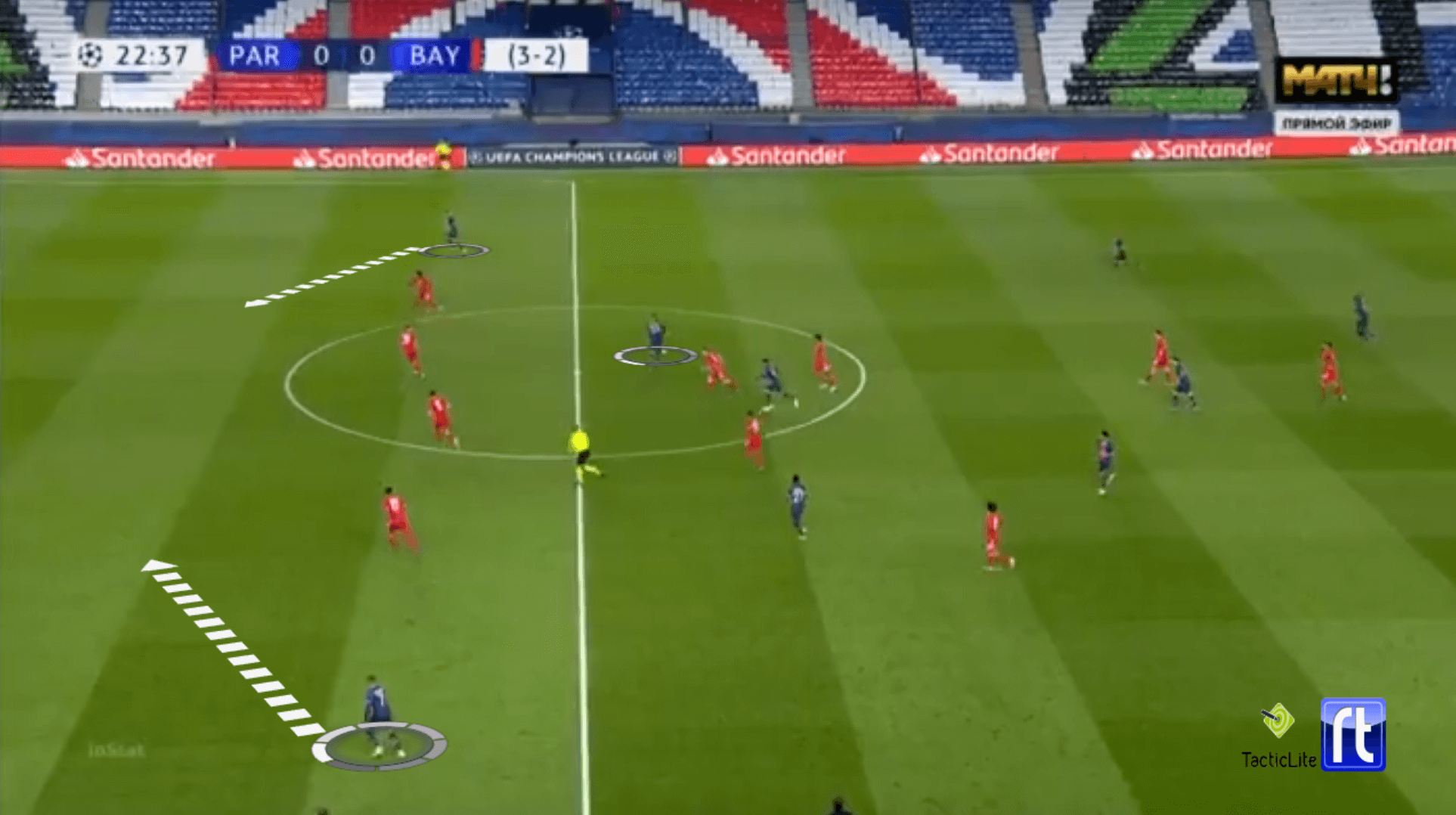 In this instance, however, PSG didn’t opt for the through pass but instead the ball was played wide to Di María. Yet this was no doubt planned for, as Di María and Draxler overloaded on Davies to progress the ball further. 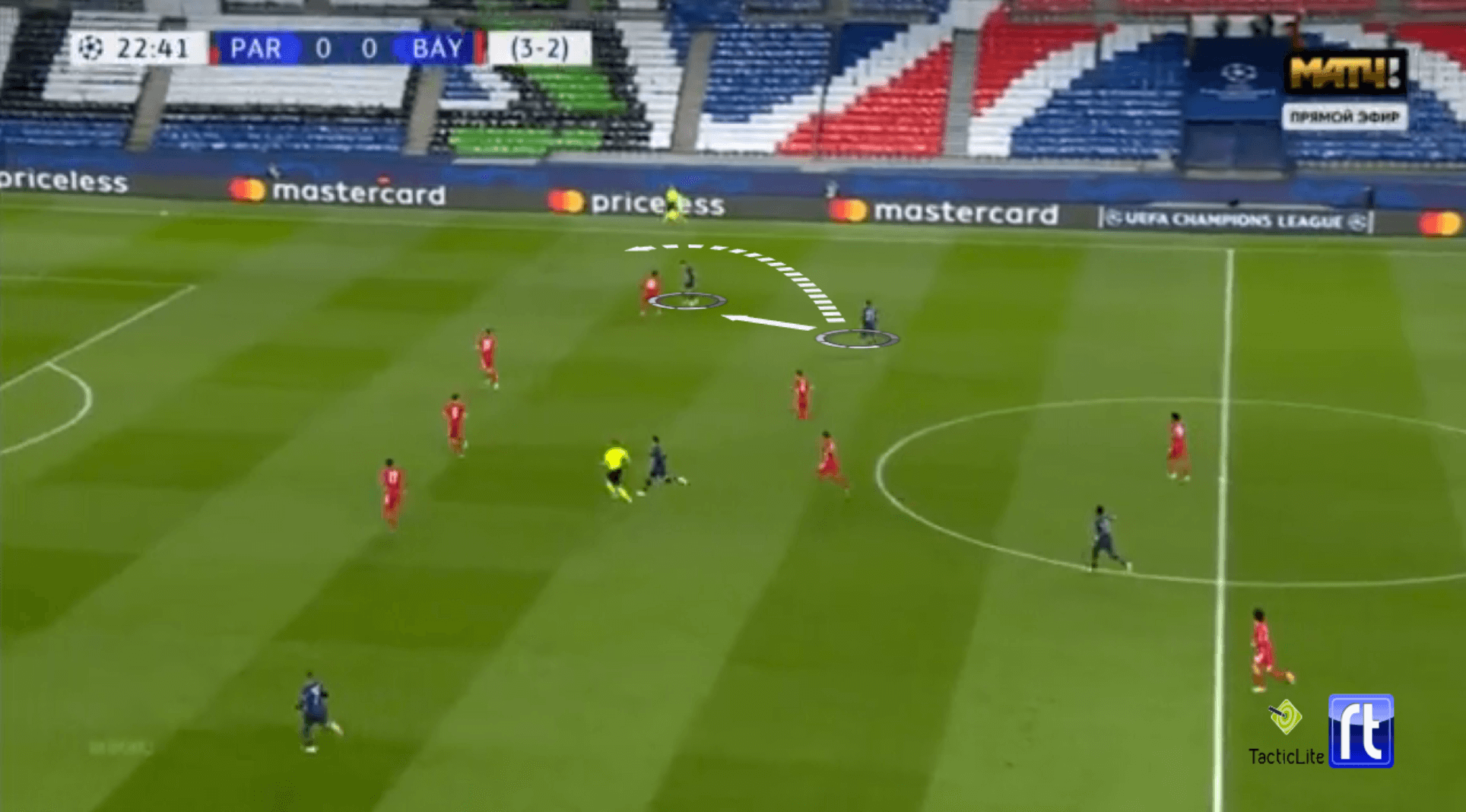 This resulted in Lucas Hernandez being drawn over, whilst Neymar’s late run into the centre of the pitch instantly drew the attention of Boateng and Pavard. And yet, all the while, Mbappe was able to move forward unmarked towards the back post, and were it not for a wayward cross from Di María, this move could well have seen PSG go ahead in this fixture. 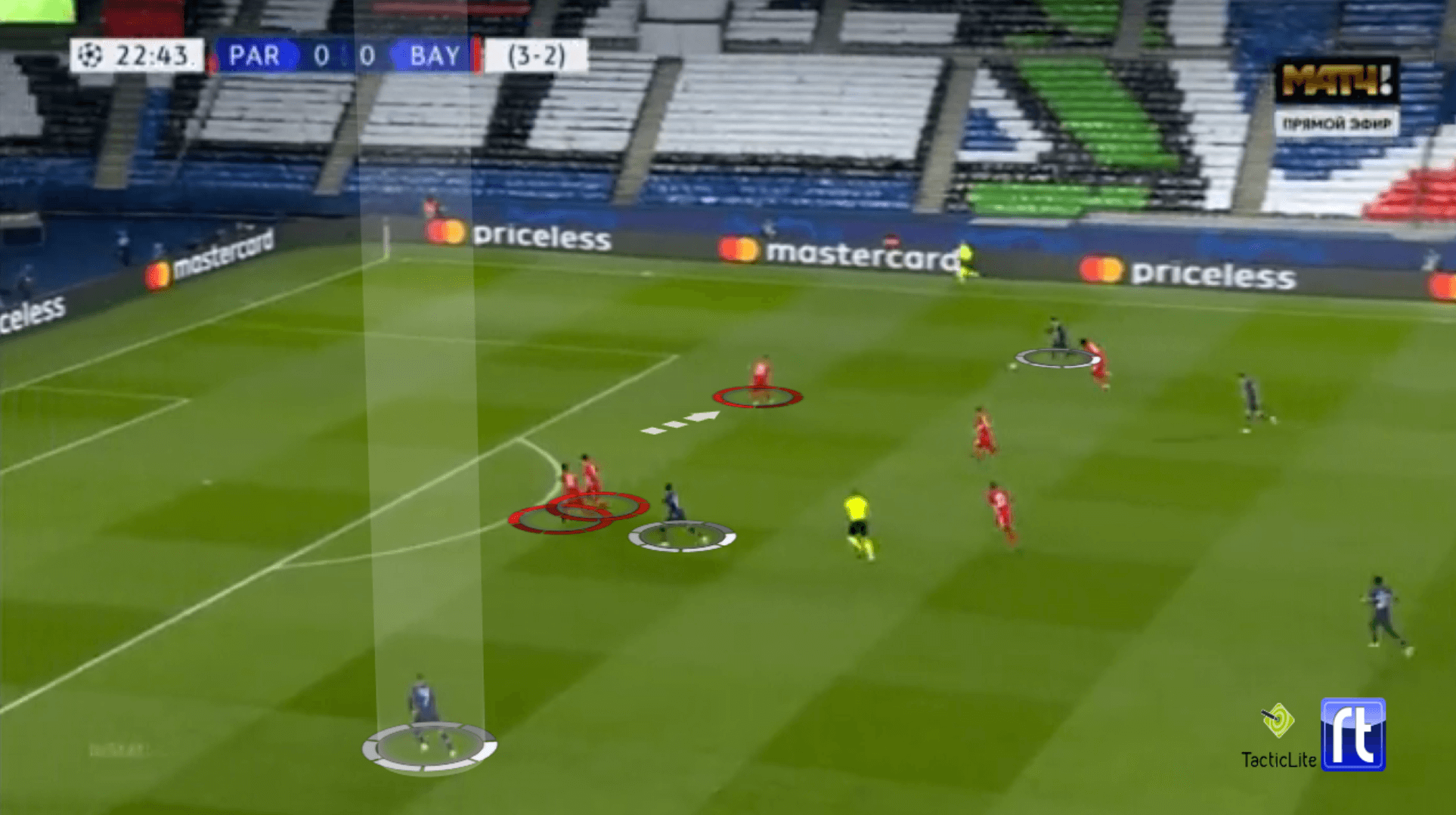 Regardless of Robert Lewandowski’s absence, with Marquinhos suspended, PSG would have been apprehensive about keeping Bayern’s attack quiet in this second leg. And whilst they didn’t quite have the same good fortune as they did in the first leg, where Bayern could have scored far more than their two goals, they did still lead somewhat of a charmed life in this fixture too.

Yet this fact shouldn’t take anything away from a PSG side that are undoubtedly one of the most dangerous teams in transition in Europe, however, also a side that consistently shows interesting ideas and true quality in possession, as well as a robust defensive shape. These traits will lead them to be worthy semi-final opponents against Manchester City and it wouldn’t be unrealistic to think PSG could go one step further this season and win the entire competition.