On Tuesday evening, we viewed the second leg tie between Chelsea and Porto in the UEFA Champions League, which was won by Porto, who did lose the overall tie. This tactical analysis will take a meticulous look at both side’s tactics, and how Porto managed to earn the victory. We will run through three key talking points, do an analysis of how Porto won this game, and what positives Chelsea can take heading into the semi-final. 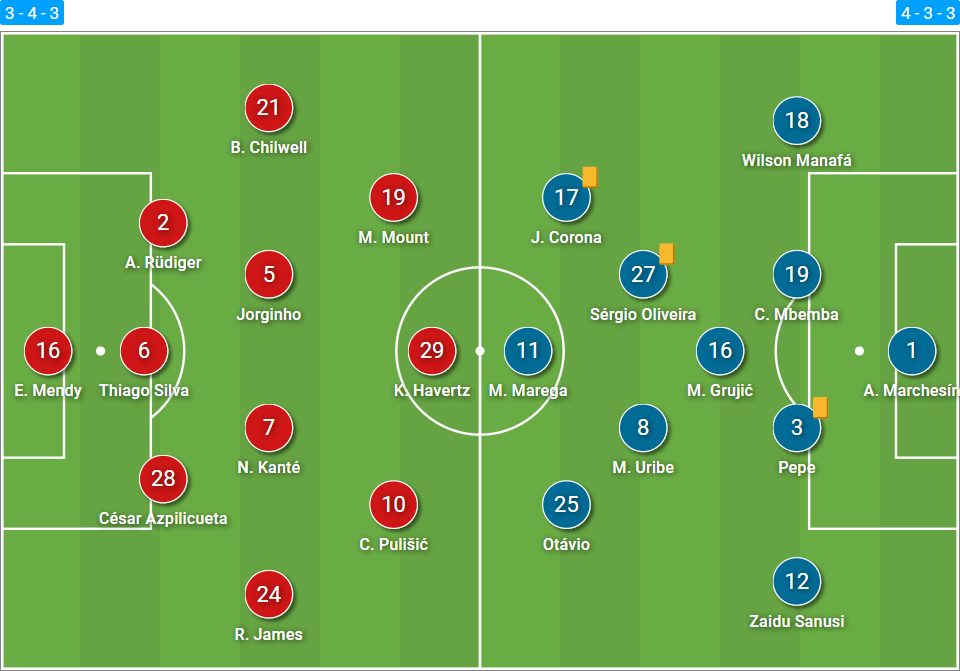 Thomas Tuchel only had one injury issue to concern himself with, other than perhaps the potential problem of rushing Kanté back too quickly with no natural central-midfield options on the bench too. Noticeably, former Real Madrid man Mateo Kovačić was absent from the full squad due to an injury. Tuchel stuck with his front three from their 4-1 win over Crystal Place over the weekend, with no recognised striker and Havertz leading the line. Though, three #9s were on the bench raring to go.

Sérgio Conceição had a few longstanding injuries, but no new problems heading into this game. Compared to the first leg, Porto lined up in more of an adventurous formation comparably, given they were in a 4-5-1 last tie. In terms of personnel, only one change which was switching Luis Díaz with Sérgio Oliveira, and Conceição moved Otávio to left-wing as a result.

Porto in the driving seat

Knowing they had a 2-0 lead over the Portuguese side, Tuchel clearly identified that his side did not need to take the game to Porto. Under the German’s reign, they have won games with over 75% of possession, but they are also capable of shutting out opportunities and conceding much of the possession. This game saw the ‘home’ side manage just 45% possession, leaving Porto with the other 55%.

The return of Oliveira was massive for Conceição’s team, but in truth, he did very little to impact this match positively. A 71% pass success rate for a central-midfielder is poor and he gave the ball away a few too many times down that right half-space. Compositionally, their formation in attack looked like somewhat of a 2-3-5 with the full-backs pushing higher to join the midfield, and Oliveira and Grujić connecting the midfield to attack. Here we can see Porto’s attacking band of four up against Chelsea’s back five, plus two midfielders who have engaged in man-marking.

Porto pressed high and wide here, with the full-backs especially putting a shift in defensively. Much of the game, from both sides, was played down Porto’s right-wing, as this is where the majority of Chelsea’s attacks spawned from, same for Porto themselves. The greatest chances created by Porto were via interchanges between the right-back (either Manafá or Nanu) and the right-winger Corona. 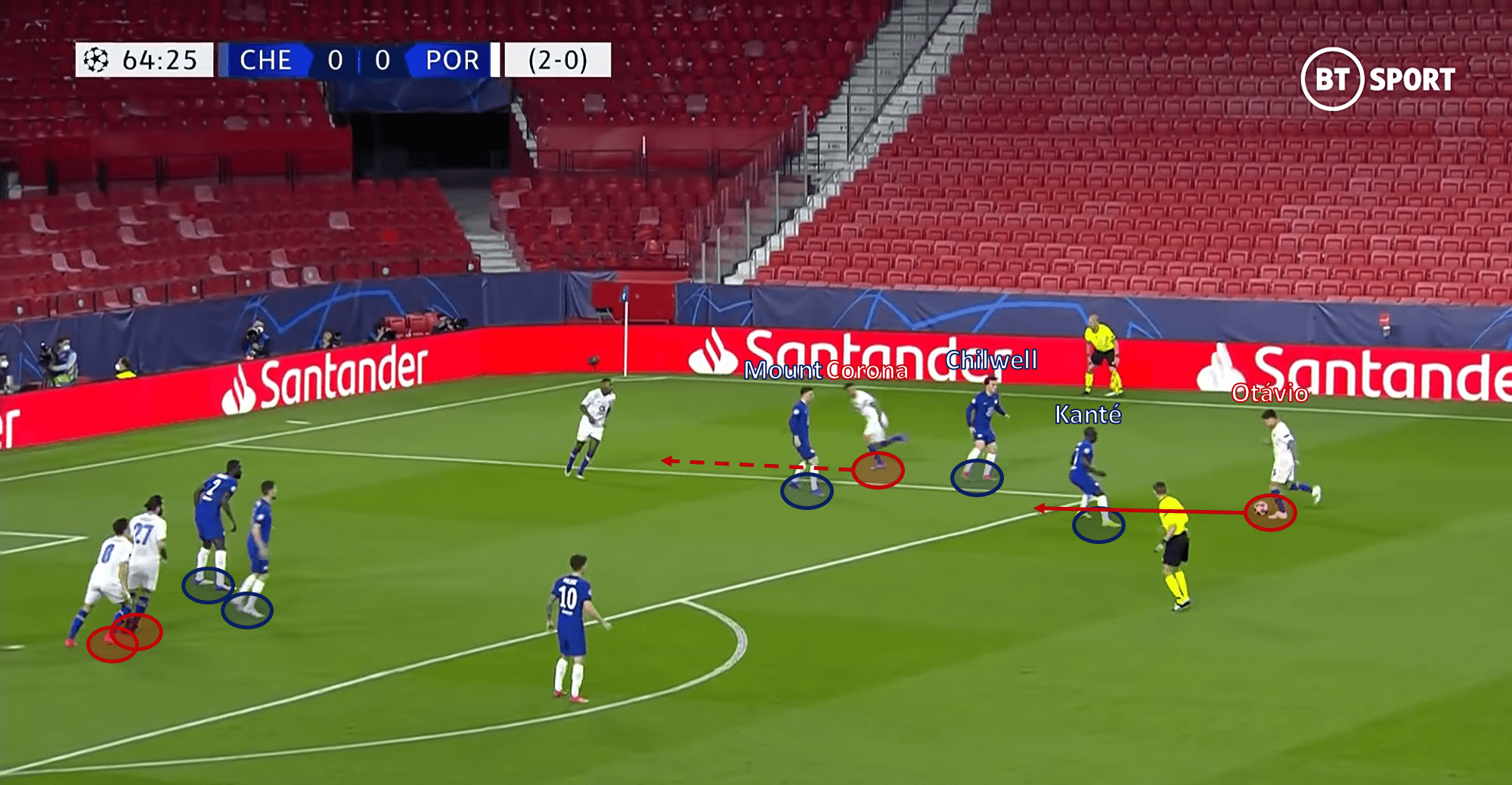 Otávio ventured out to the right-wing for this month, finding Corona with a lobbed through ball, going over the three Chelsea defenders, including Mount. 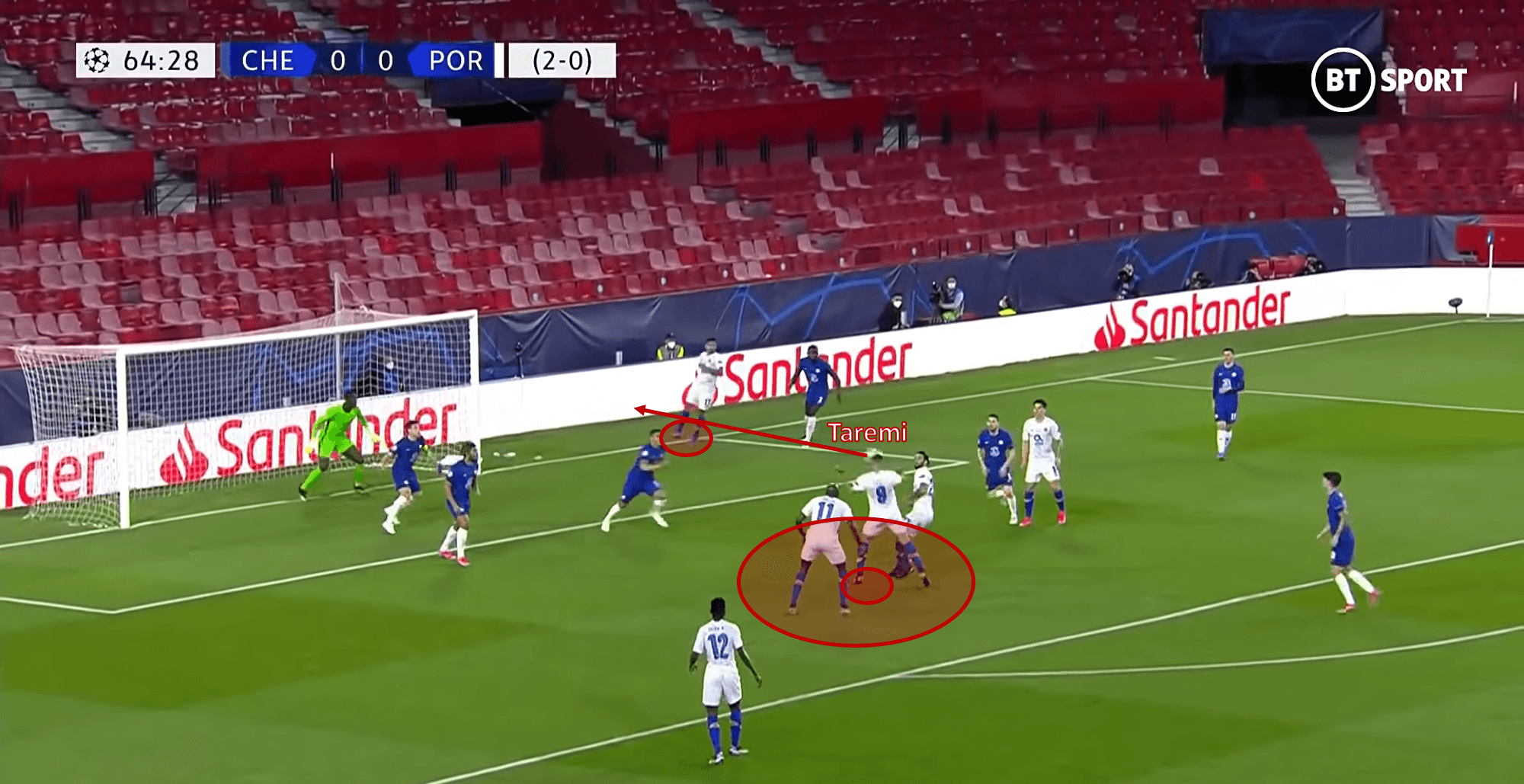 Chelsea are a bit standoffish at this moment, giving Porto men the time and space to shoot inside the box, although it would have been difficult to score with a header from there.

Matter of fact, it was how they scored their goal in the 90+4th minute. Simply, the ball was sent down the line on the right flank, and Nanu was the one to chase it and send in a lofty delivery towards the centre of the penalty area, where the other substitute, Mehdi Taremi, met it with a stunning overhead kick. He shinned it, sure, but still, credit where credit is due, it is a sensational effort and part of what made it so good was the complete lack of tension that preceded the strike. Or what followed after for that matter. 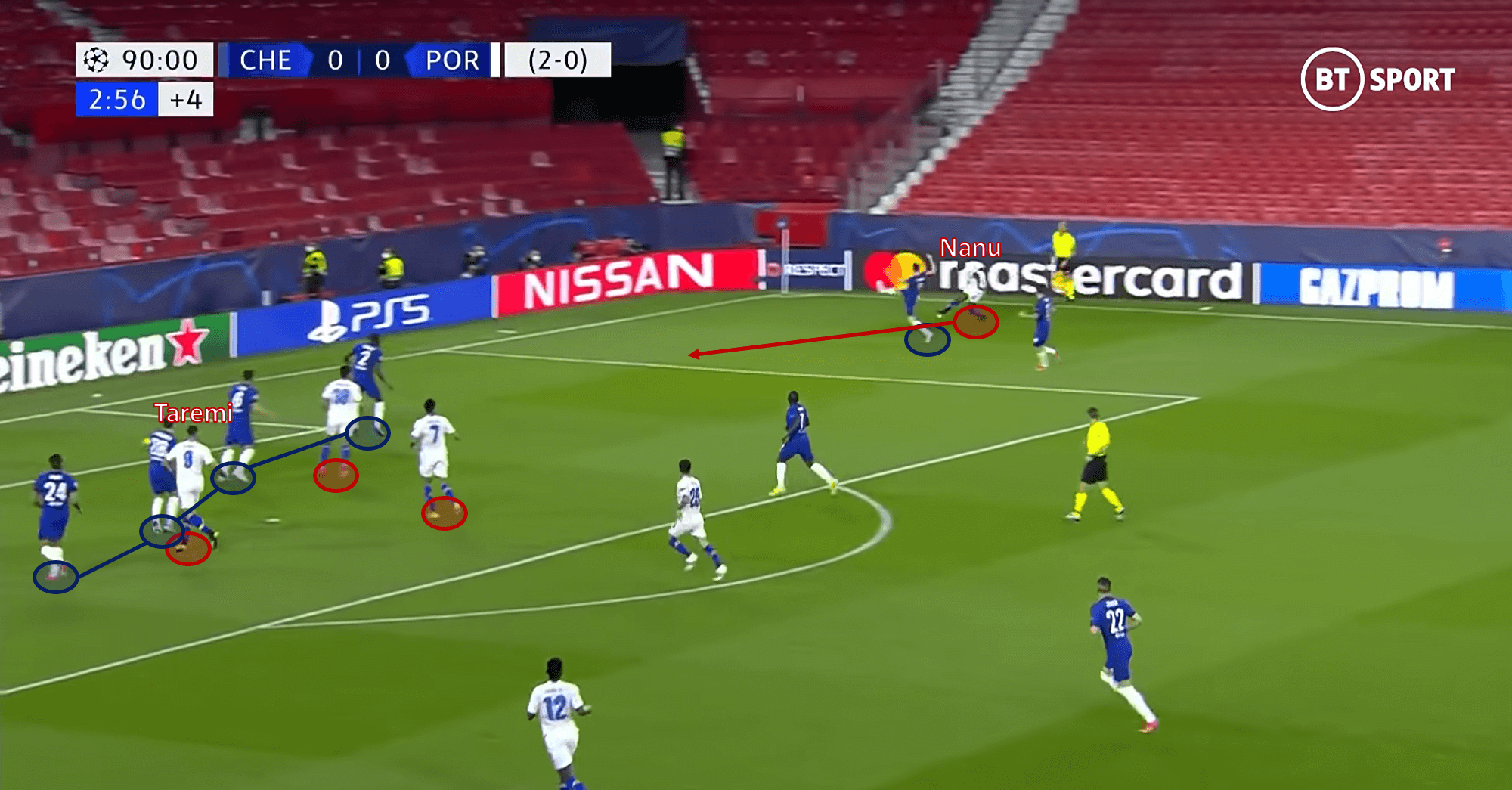 A through ball down the right flank is again another avenue for chance creation here. Nanu sends in a lofty delivery to the middle of the penalty area. 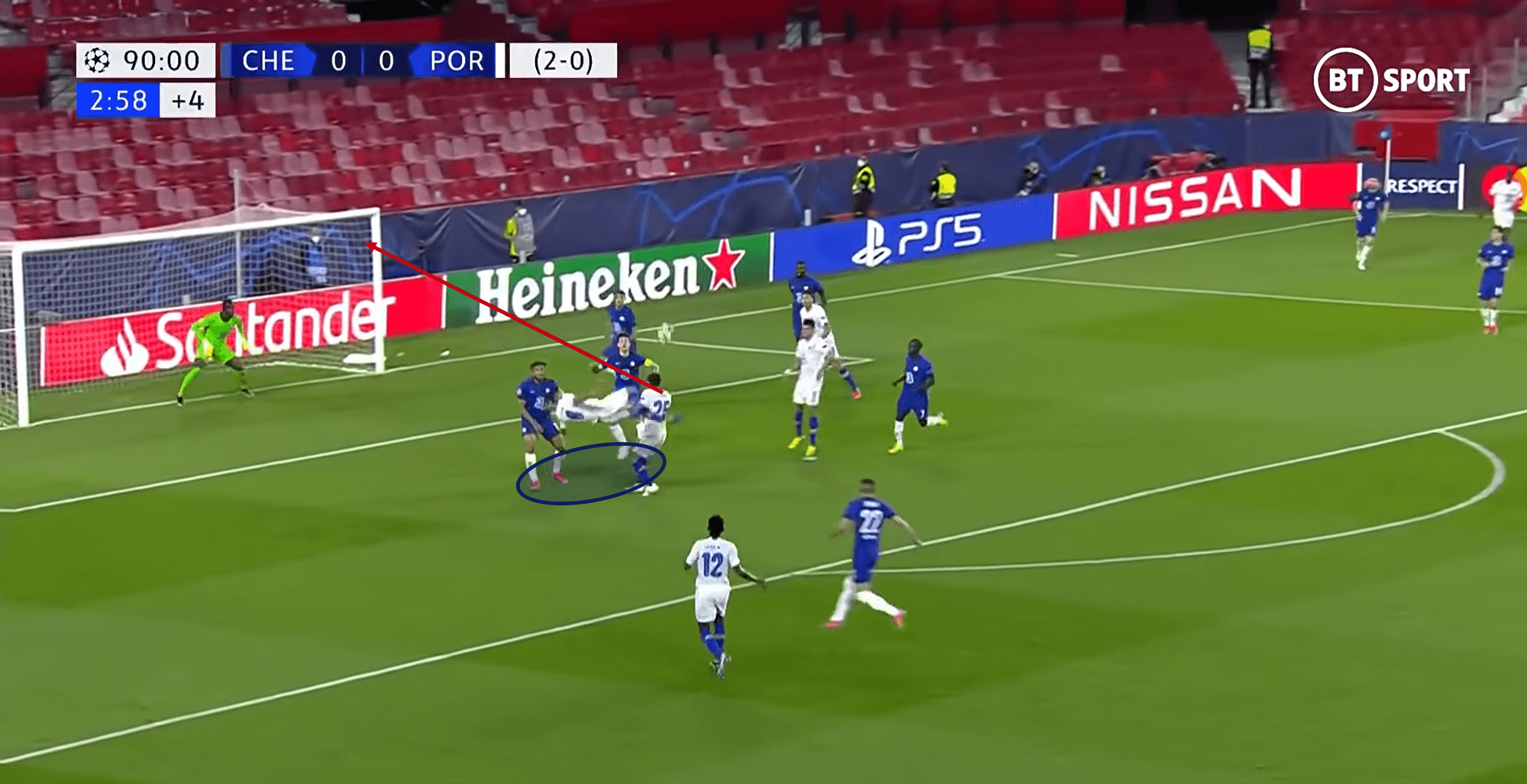 Unbelievably, Taremi steps back whips his foot into the air, and the ball comes cleanly off his shin to flow into the upper right of the net.

Chelsea hit them on the counter

Chelsea here continued with their 3-4-3 formation that has become so synonymous with Tuchel’s time at the club so far, and the success he has enjoyed with it. Chilwell and James have purposefully been the wing-back duo of choice for both legs of this tie, due to the athletic nature of the pair of them to maraud up and down their respective flanks. Much of the success in this game was met via Chilwell combining with Pulisic on the counter. 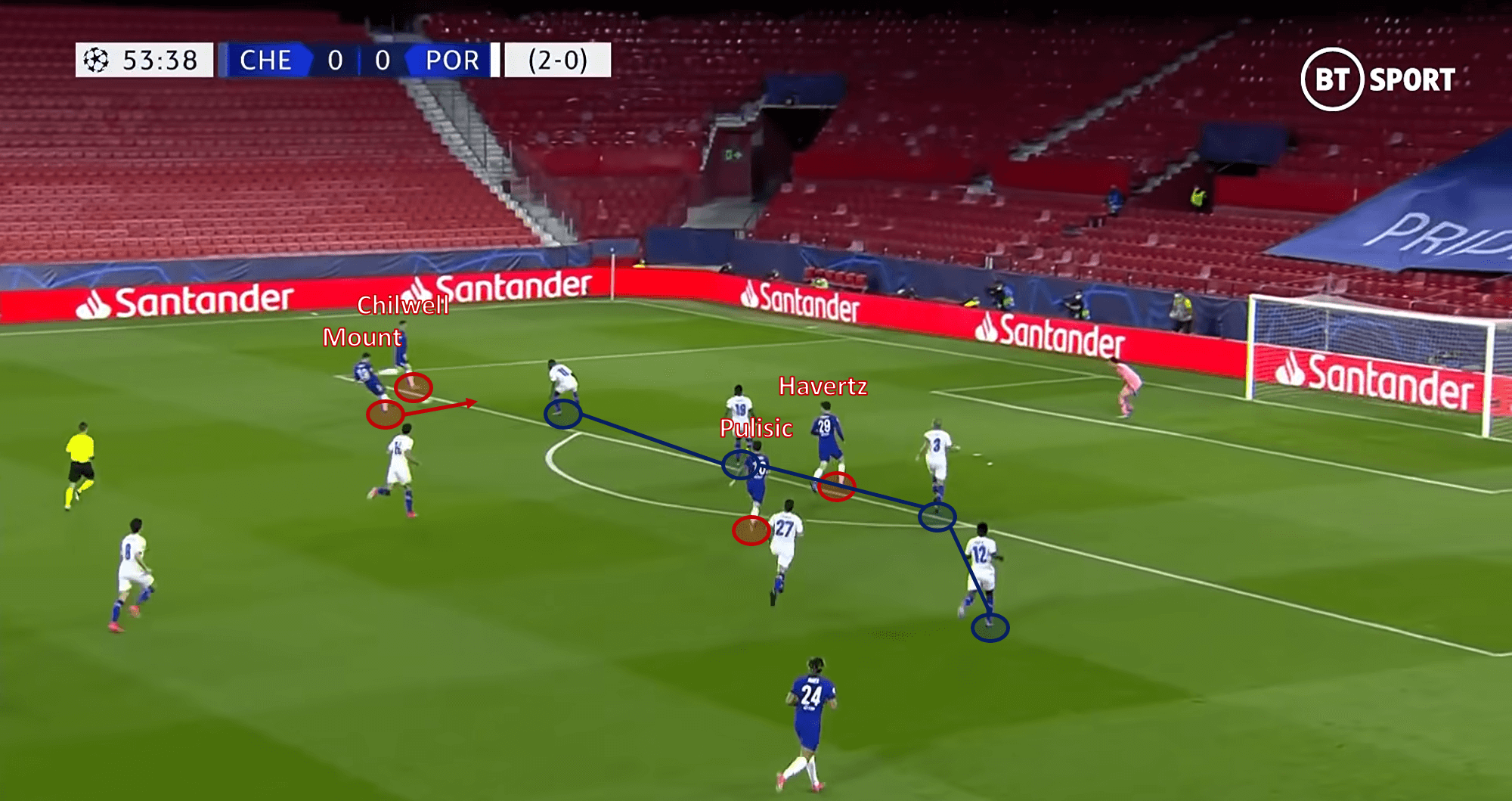 Mount receives the ball down the half-space and finds the overlapping Chilwell with a through pass. Pulisic and Havertz are the targets inside the box. Free inside the area, Pulisic only needs a calm cross from Chilwell for a decent opportunity on goal. Unfortunately, the ball hits Pulisic’s shin.

And as much as they can both do their bit attacking-wise; it is their ability to drop back with the defensive line and provide cover for the wide centre-backs which was useful as well. This team could smoothly transition from a 3-4-3 into a 5-2-3 within seconds, and this helped Tuchel’s side nullify any attacks that Porto had. With two of the Porto midfielder’s breaking from midfield into an attack, they aimed to exploit the space with their passing, but this formation flexibility did not allow them to do so successfully.

Although, the two heroes of this tie from a defensive perspective was the midfield double-pivot of Jorginho and Kanté, who moved about the pitch with energy and defensive awareness that enabled the Blues to hit Porto on the break. Of course, Chelsea did not have many attacks themselves, but they did not mind. The goal from the offset was to clearly keep opposition opportunities down to a minimum and hit them on the break where possible.

When it comes to Kanté, he was the more adventurous of the two, opting to go with a slanted double-pivot in moments where they looked to win the ball back. If Jorginho did win the ball back, then Kanté would step forward and look to receive the ball in between the lines, where he would usually rotate possession into the wide areas where the wing-backs and wingers could combine to create chances.

Kanté wins the ball back in midfield and he has both Pulisic and Mount available on the counterattack. As a result of this, Chelsea are in an advantageous 4v2 scenario, but they fail to exploit the situation to their benefit.

It was briefly mentioned, but the low block of Chelsea was the key to them keeping Porto at bay for much of this game. The organisation of the back three was well-drilled, as they rotated possession between them for a good proportion of the match. But overall, they aimed to not vacate from their pre-determined positions too much, intercept any attempted passes in the penalty area, and lay off the ball to one of the wing-backs or midfielders.

Man of the match

Overall, it must be said, this game did drag. It was not the most exciting affair, and for the most part, I wished I were watching the other more exciting tie. However, moments of joy did come from Pulisic in this game, who looked to consolidate his place in the starting line-up after an impressive performance versus Palace on the weekend. Though, he found it hard to really get into this game considering he was fouled 11 times across the ninety. 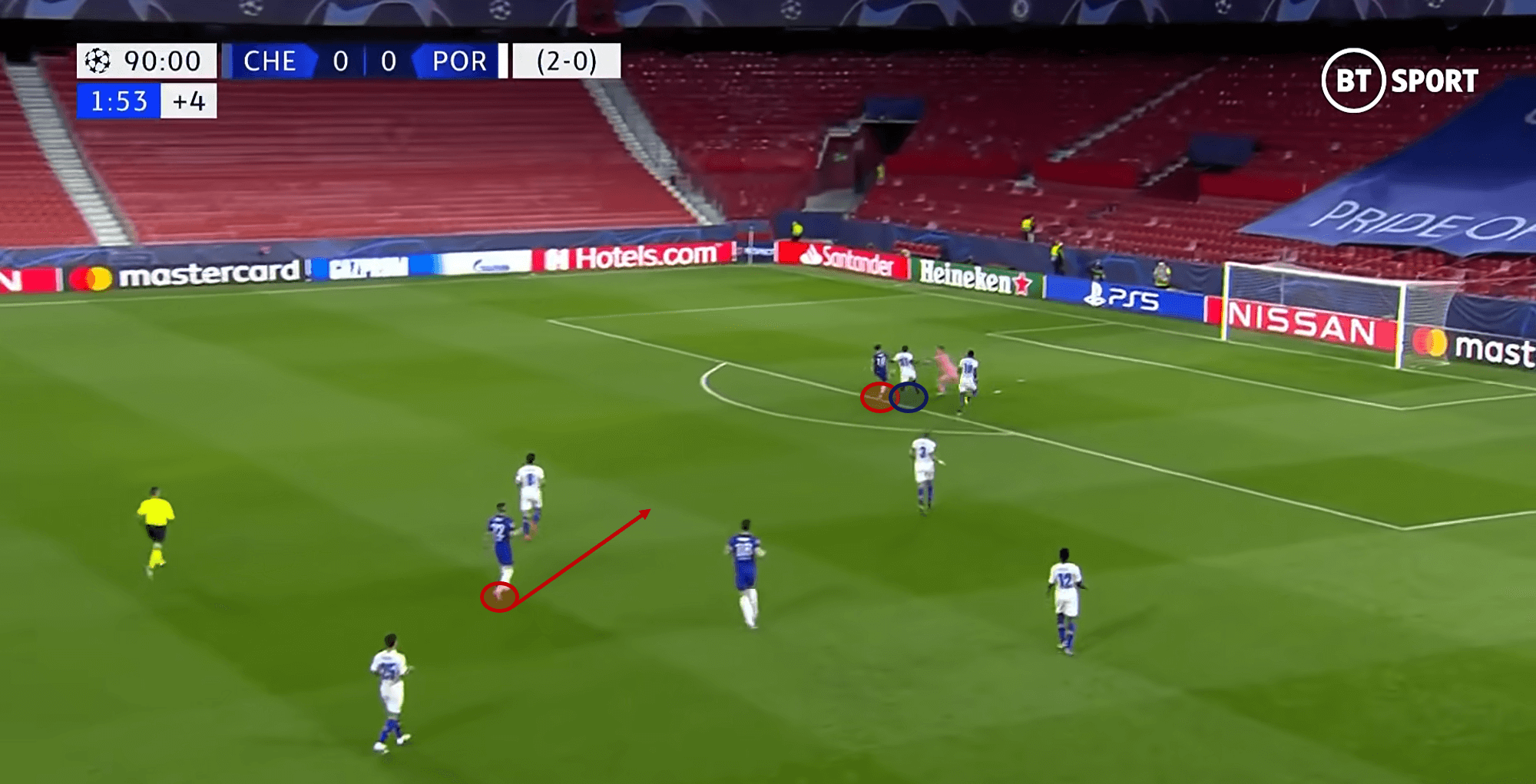 In the dying embers of the game, Pulisic is through on goal thanks to a Ziyech through pass but is shuffled off the ball before he can get a clean strike on goal.

His key standout statistics were: three successful dribbles, seven progressive carries, four shot-creating actions, and 0.5 xG were all the highest in the Chelsea team. He was the standout attacker in this match, and who knows, if he were not fouled every 8.2 minutes on average, he could have earned them at least a draw. His connection with Chilwell was strong, and his dynamic running on and off the ball nearly scored Chelsea a goal. 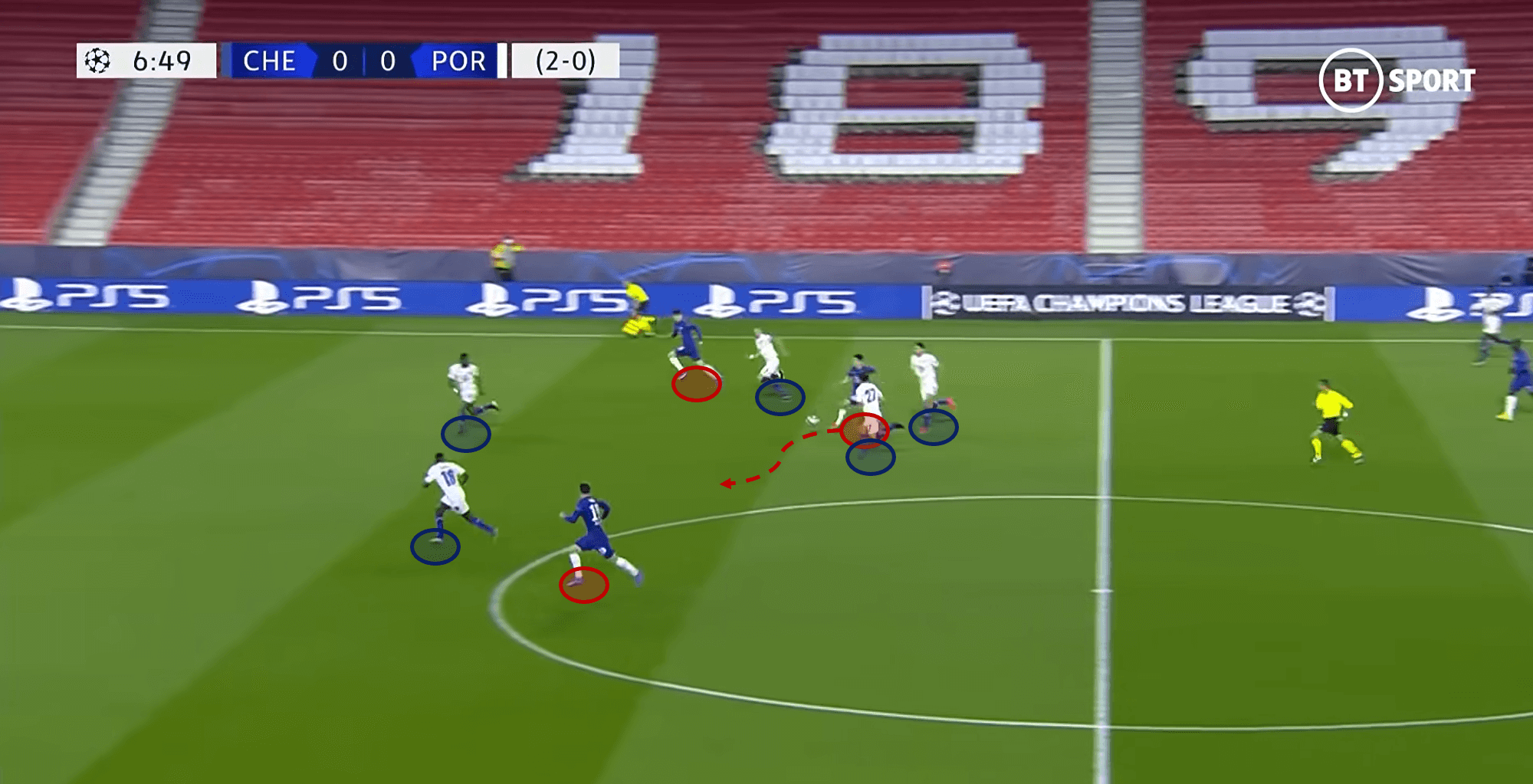 Early on in the game, Pulisic drives through the centre of pitch past a few Porto men, with Mount and Havertz in support on both flanks. While Mount pulls back for a shot, Pulisic does continue his run after his dribble to offer support in the attack.

If he can take this strong form into the latter end of this season, similarly to the way he did last term, he could well land back into the discussion of one of the Premier League’s brightest youngsters, given he is still just 22-years-old. That is injury-permitting of course. He has the talent and is entirely reminiscent of a young Eden Hazard, a player who was just hungry to create chances and take on his opponent directly.

Chelsea can now head into the semi-final against either Liverpool or Real Madrid with high hopes of getting through to the final. A 2-1 win against Porto on paper is not the best result possible but going ahead in the first leg and not really being tested in the second is a testament to Tuchel’s ability to coach this squad diligently. The same occurred in the previous leg against a really tough draw in Atlético Madrid, the team that everyone wanted the least at the time. Despite only playing a few days prior, Chelsea managed to keep control on a game that could have easily spun out of control if they let Porto do so. Exciting times ahead for the Blues, and eerily similar to their 2012 road to victory as well.