The NWSL Challenge Cup was a success for women’s football in the United States last season, so the NWSL decided to bring it back this season as an early season cup competition. Neither of these teams was involved in the competition last fall. Racing Louisville is starting their first season, while the Orlando Pride withdrew from the previous season’s edition of the Challenge Cup after a surge of COVID-19 cases.

The first round of the NWSL Challenge Cup is the first matches to take place in home markets, with supporters in the stands, in over a year. The teams have completed the longest pre-seasons in NWSL history and are coming into this competition in the hopes of getting off to a positive start. Racing Louisville is hoping to avoid the struggles common to new US soccer teams, while Orlando Pride hopes to put their defensive problems of the last two seasons behind them. Analysis shows that Orlando has averaged over two goals allowed per match, ranked as the worst defensive side in the NWSL.

Five hundred thirty-six days after the NWSL announced an expansion to the area, Racing Louisville made their debut at home in the Challenge Cup. Christy Holly’s tactics for the first match was a 4-4-1-1, with team captain Michelle Betos starting at goalkeeper. The defensive line consisted of Erin Simon, Nealy Martin, Brooke Hendrix, and Emily Fox. Getting the start in the central midfield was Freja Olofsson, who joined the new NWSL side from KIF Orebro in Sweden, lined up beside Lauren Milliet. Hometown product Emina Ekic got the start on the right-wing, with 2011 FIFA Women’s World Cup winner Yuki Nagasato starting on the left-wing. CeCe Kizer was the primary striker, with vice-captain Savannah McCaskill playing a slightly deeper role.

After only playing five matches last season, in the NWSL Fall Series, Orlando Pride manager Marc Skinner had to deal with a changed roster and missing pieces with his first lineup of the season. Switching from the 4-3-3 that he used during the Fall Series, Skinner opted for a 4-2-3-1 in this match. Club captain Ashlyn Harris started in goal, with centre-backs Phoebe McClernon and Konya Plummer ahead of her. Two experienced internationals started at full-back, with New Zealander Ali Riley on the left side and American Ali Krieger on the right side. 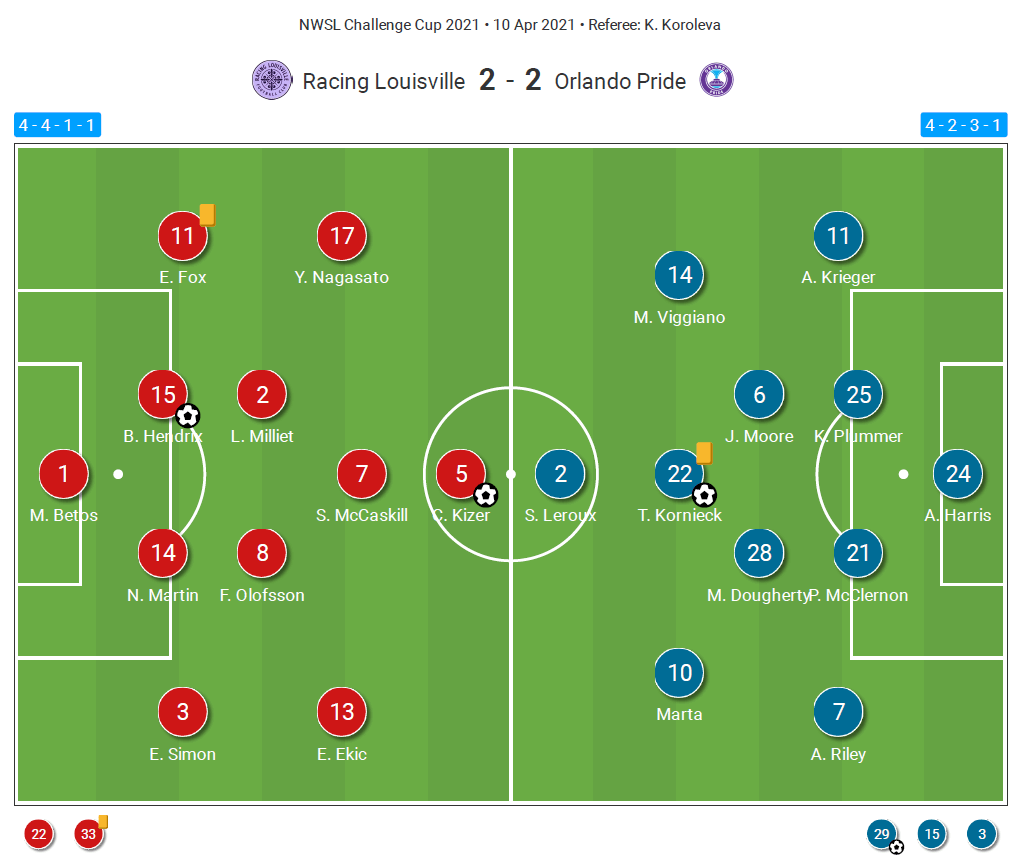 This tactical analysis will show how Orlando Pride showed poor defensive structure, allowing the home side to pick them apart repeatedly. This analysis will also look at how Racing Louisville created numerous chances but struggle with poor finishing. Finally, we will look at the tactics that let Orlando back into the match to eventually take the lead before conceding a last-minute set-piece to leave the match at 2-2.

Chances were created early in this match and continued throughout the first 15 minutes. From the beginning of the match, it was easy to see why Orlando Pride has had such a dismal defensive record the past two seasons. There was very little communication between the defenders and no connection between the defensive and midfield line.

Both of Orlando’s centre-backs took up problematic positions, which left them exposed. The centre-backs problems weren’t helped by Ali Krieger’s aggression at right-back, as she constantly looked to get high up the pitch. Yuri Nagasato took advantage of this several times, as she drifted behind the right-back and was a constant attacking option.

Racing Louisville was also able to control the ball in the midfield with very little pressure. The lack of pressure allowed players like Savannah McCaskill to play lethal balls through the defence. An excellent example of this came in the fourth minute. 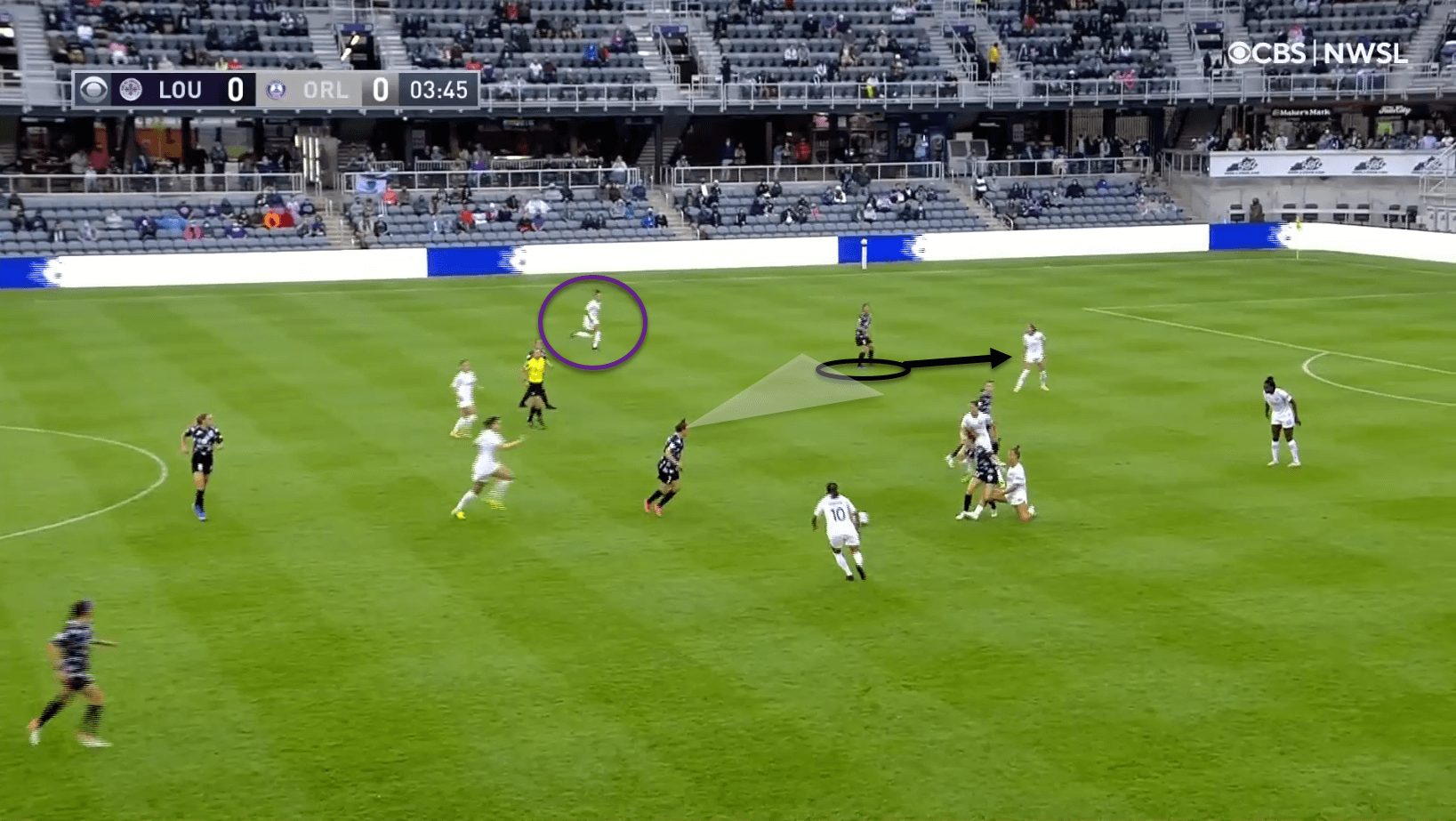 The image above shows both of these problems. The ball is rolled back from Emina Ekic to McCaskill. Nobody is marking the midfielder, and she’s able to get her head up to look for passing options. Ali Krieger (purple) has allowed Nagasato to get goalside of her, and the Japanese international makes a run to get behind the disorganized Orlando Pride defenders. 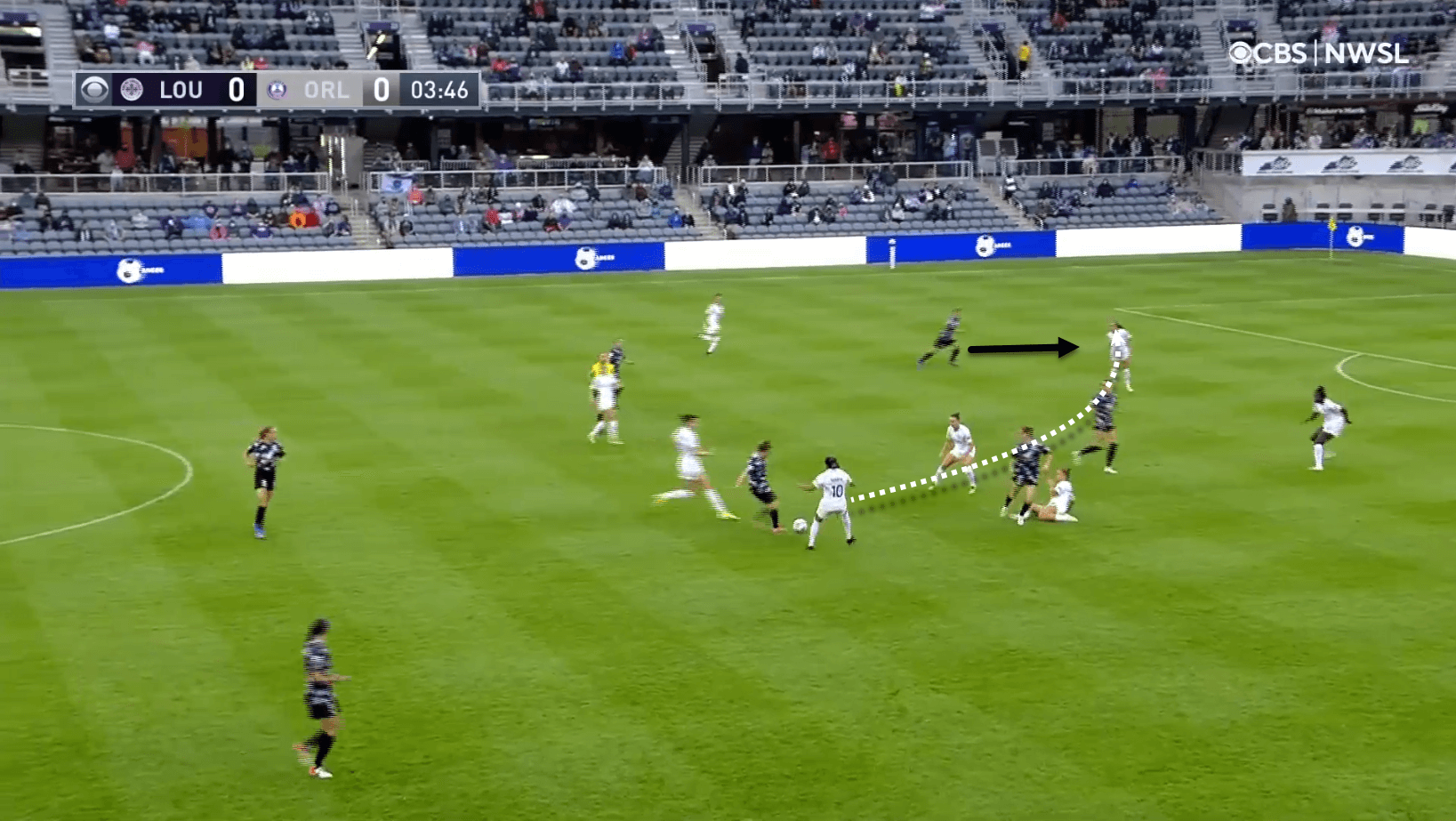 In the image above, we see that McCaskill plays a first-time looping pass towards Nagasato, who is making a run towards the far post. Luckily for Orlando, Phoebe McClernon is just able to head the ball away, sparing Ashlyn Harris from a dangerous one-on-one attack. This chance was the second scoring opportunity carved out in this match, which wasn’t even into the fifth minute.

Another chance would come less than a minute later. Central midfielder Lauren Milliet drifted into a wide position on the right side and gained a yard of space to cross into the penalty area. The image below shows that Ali Krieger is in a better defensive position, but she gets caught ball watching. 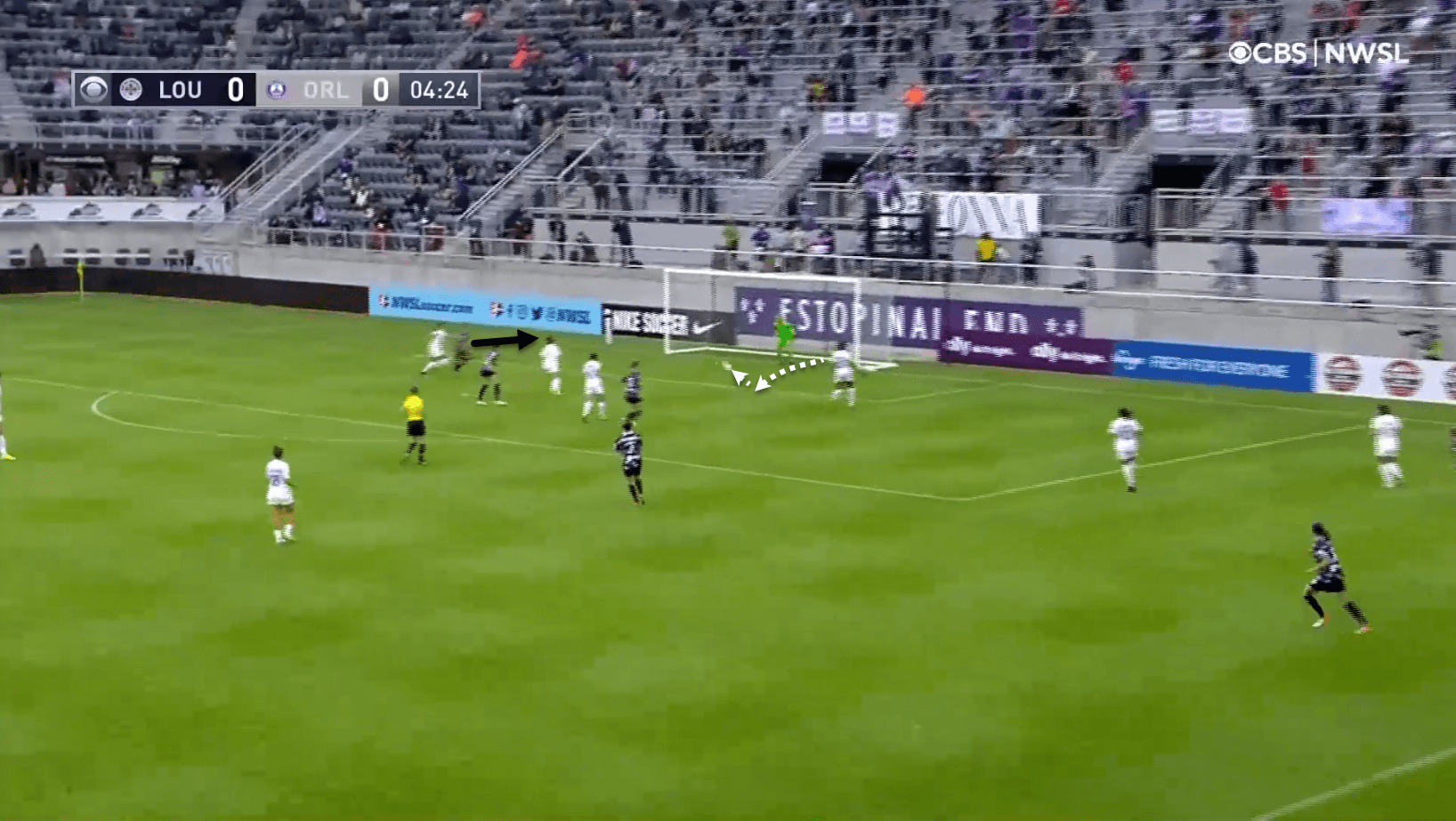 The preceding image shows that Konya Plummer is slow to react to the cross and allows the ball to bounce through the penalty area. Krieger has allowed Nagasato to move in front of her and get to the loose ball first. Only an excellent reflex save by Harris prevents the home side from taking an early lead.

This defensive unit honestly had an opening 15 minutes to forget. Every time that Racing Louisville came forward on the attack, Orlando seemed to show a parade of moves to avoid. Poor communication, poor positioning, too much space, and a lack of pressure were recurring themes.

Racing Louisville couldn’t have asked for a more accommodating opponent in their first match. If their finishing had been better, the home side could have easily scored three goals in the opening 15-20 minutes. Louisville attacked Orlando right flank repeatedly, but they were often let down by their final touch in the penalty area. 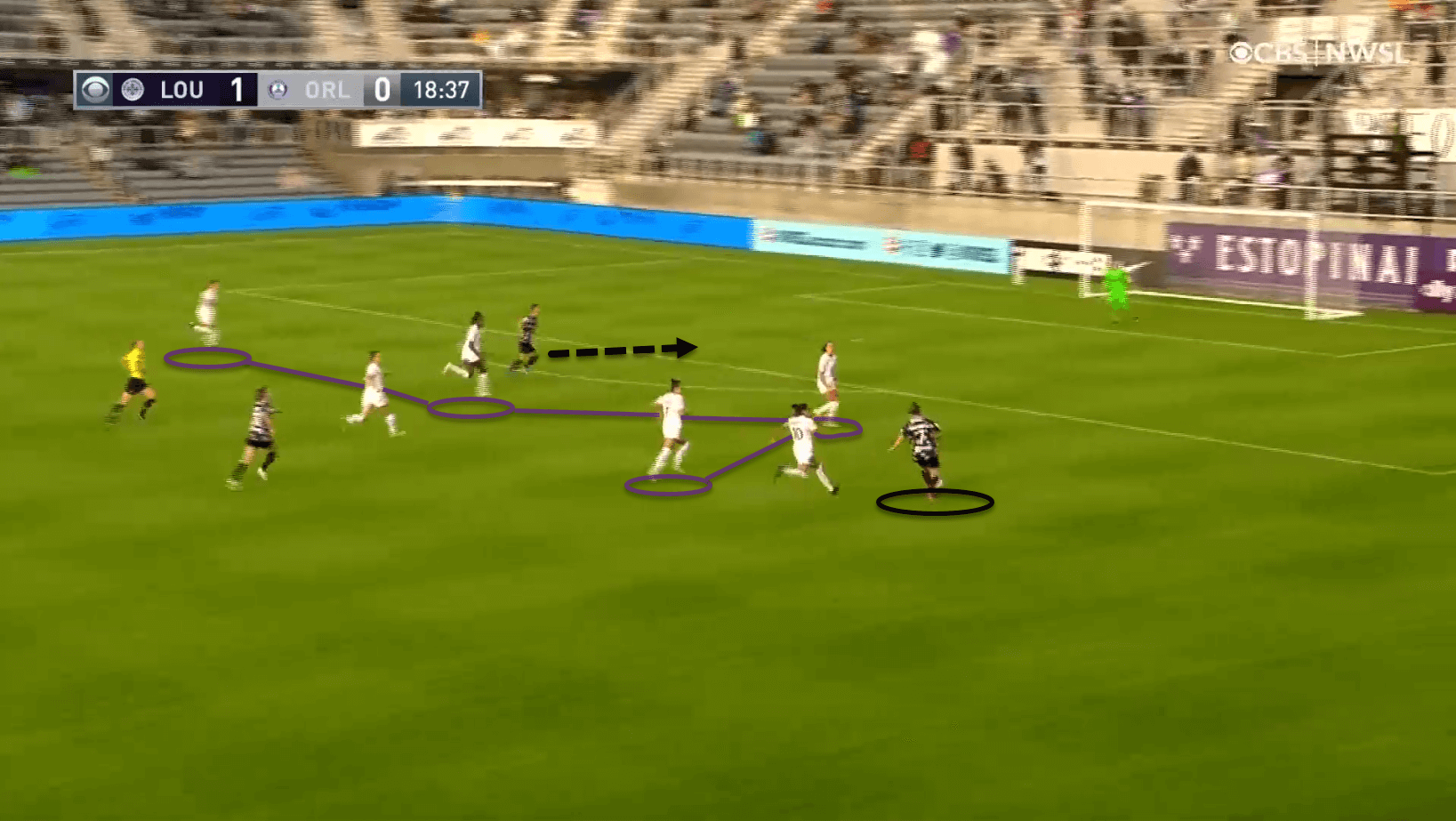 Unfortunately, McCaskill plays the pass slightly too far ahead of Nagasato. The image below shows that Nagasato can reach the ball, but her first touch lands behind her, allowing the defence to get back into position. An attack that should have resulted in a high percentage shot instead ends in a scuffed shot that a defender easily blocks. It took until the 12th minute for Racing Louisville to finally open the scoring. Many of the issues we’ve already talked about surface again in this sequence of play. It starts with Emily Fox, Louisville’s left-back, advancing with the ball and coming under no pressure. Without any pressure, Fox can pick her head up and scan the field for passing options. 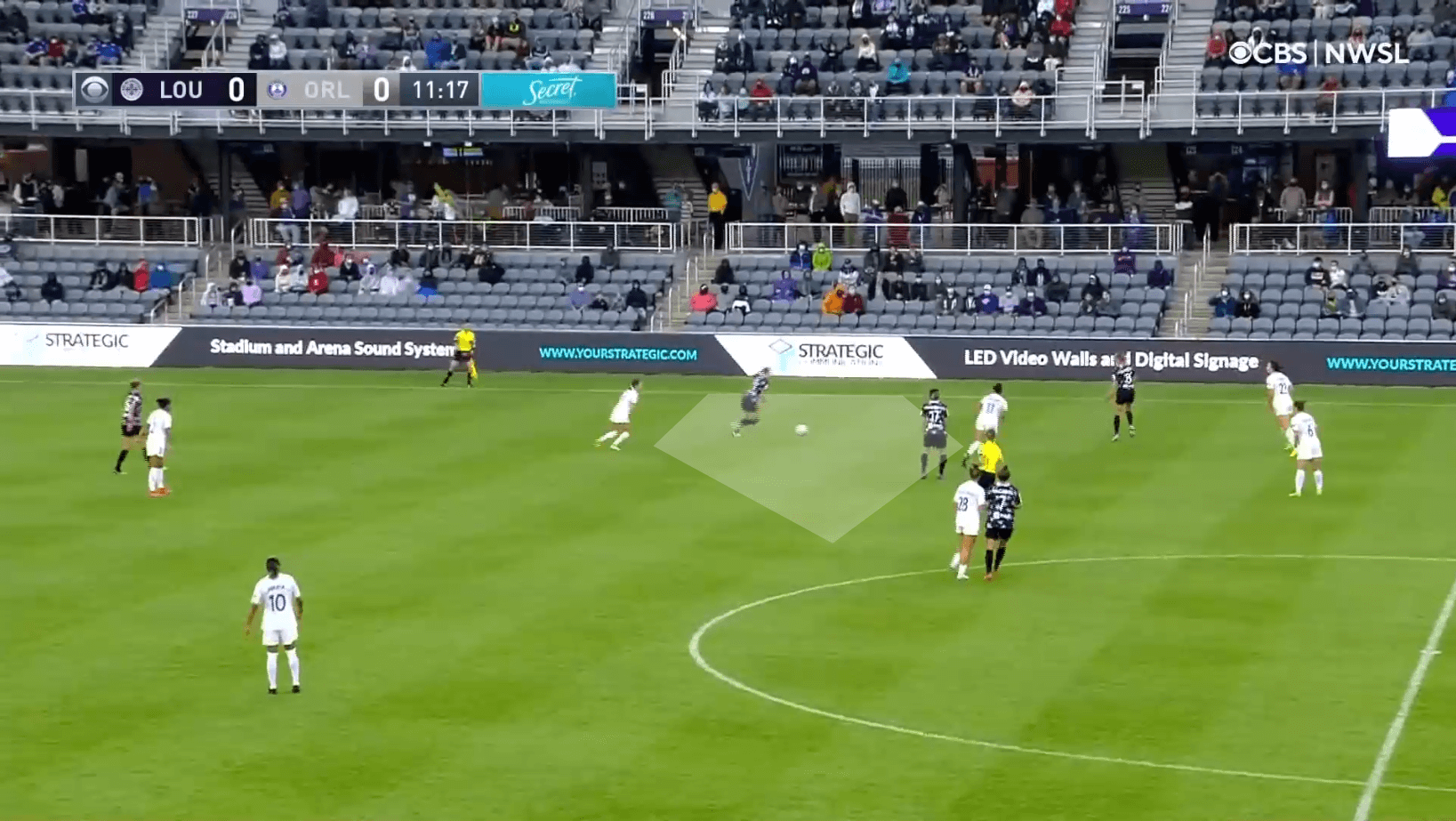 Fox lofts the ball forward behind the defensive line. CeCe Kizer exploits the left channel to get behind Krieger and Plummer. The following images show how Kizer’s speed allows her to quickly leave Plummer behind, with Krieger just keeping up but not close the distance. With her pace, Kizer can get on the end of Fox’s long pass and easily slot the ball past Harris. 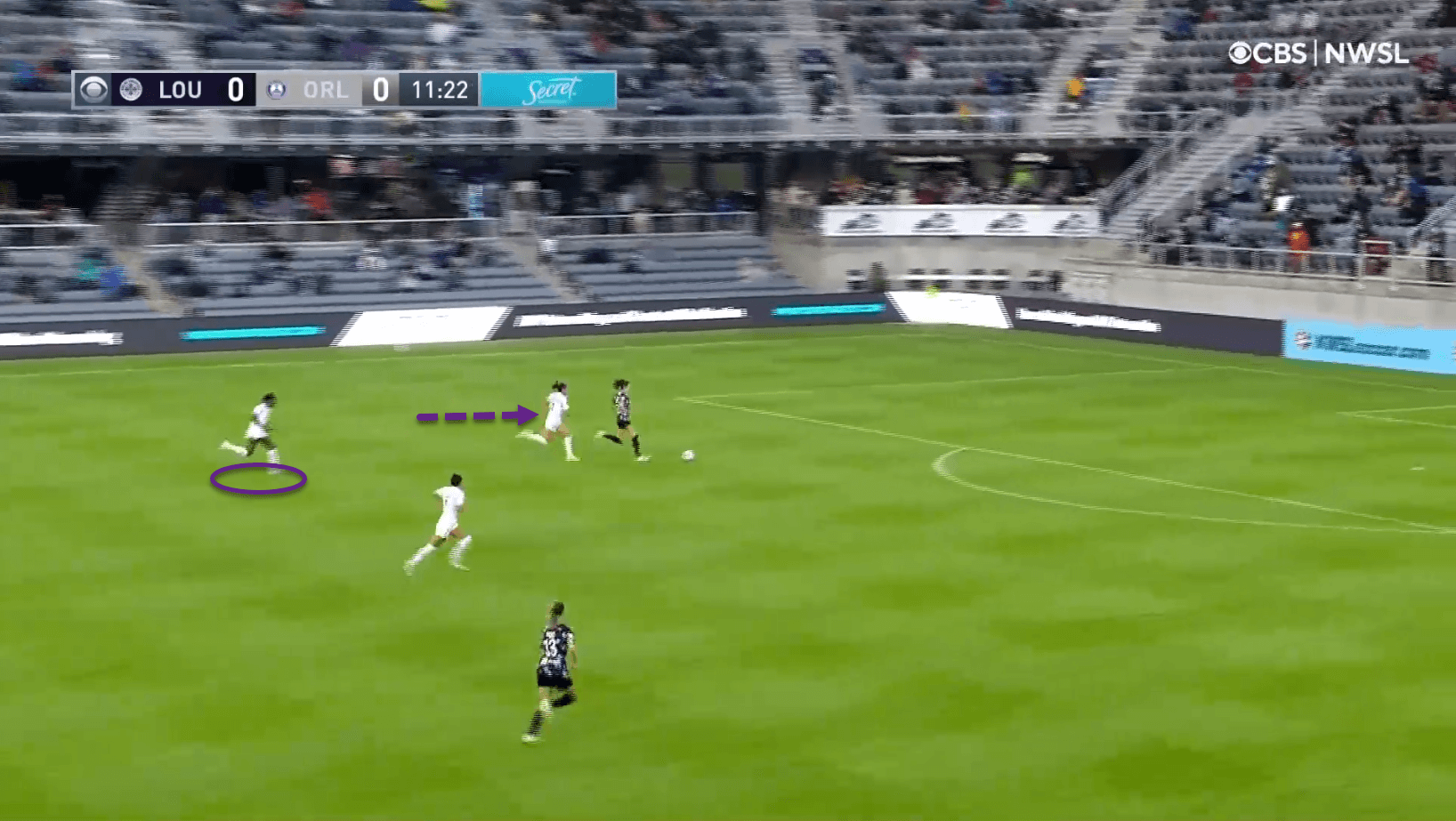 After the defensive disaster on show early in this match, Ashlyn Harris used the time after the goal to have a conversation with her defensive unit. I shudder to guess what was said during the conversation, but Harris was frustrated with the amateur level defending she was watching. 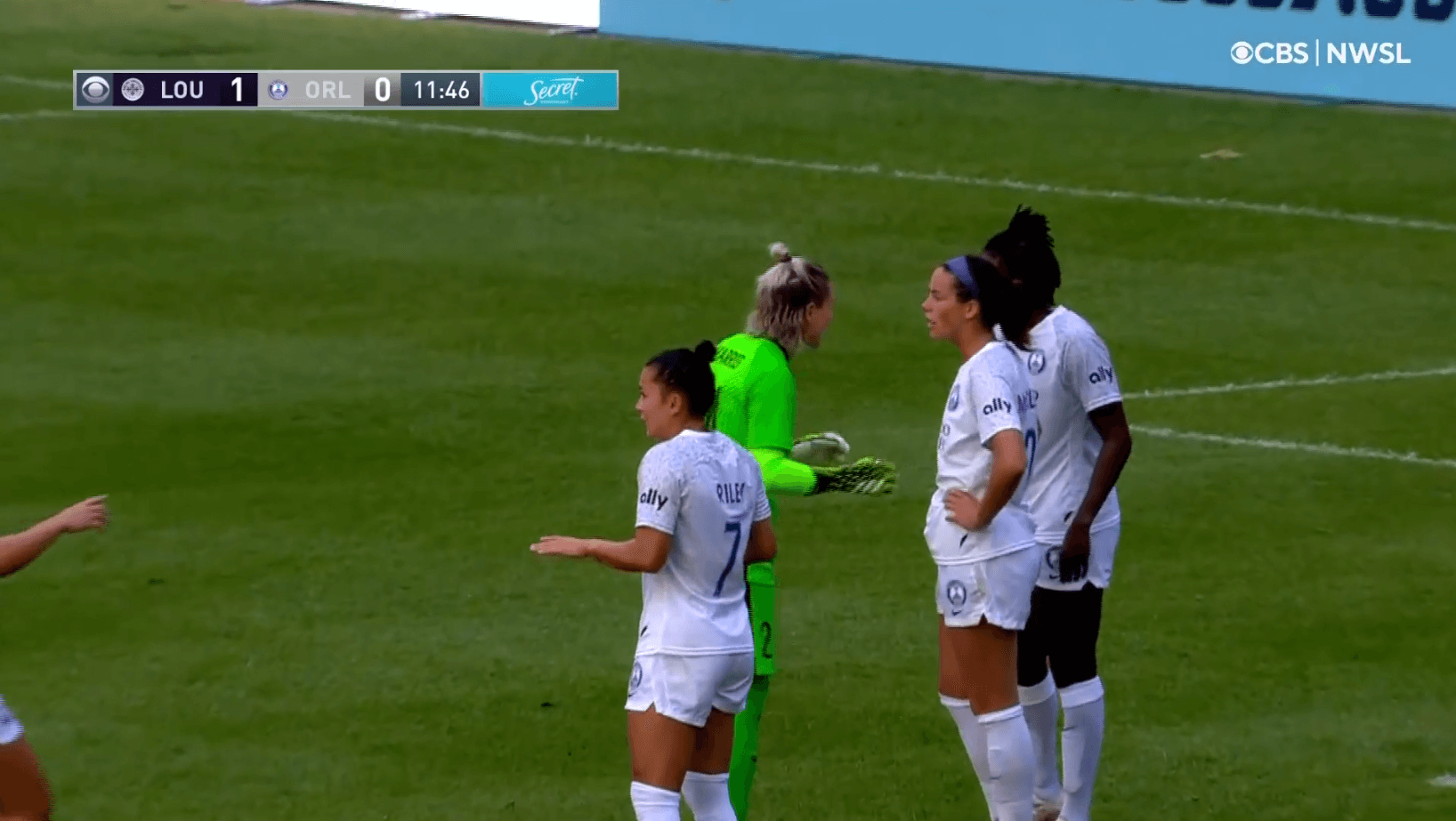 A few minutes after Racing Louisville took the lead, the skies above Lynn Family Stadium opened up. A heavy rainstorm that lasted about 15 minutes did more to stop the home side’s attack than the Orlando defence. The players struggled to keep their feet, and the passing quality decreased. During this period of the match, neither team could complete more than 70% of their passes.

The away side started to grow into the match towards the end of the first half. Once the rain stopped, Orlando Pride began to take more control, and their defence improved.

Orlando has dangerous options in attack. Opposing defence’s focus their attention on Sydney Leroux and Marta, but Taylor Kornieck was the focus of their attack in this match. Operating as the central attacking midfielder, she floated into the space between Louisville’s lines. Her touch and skill were exceptional, but her strength and size set her apart in this match. 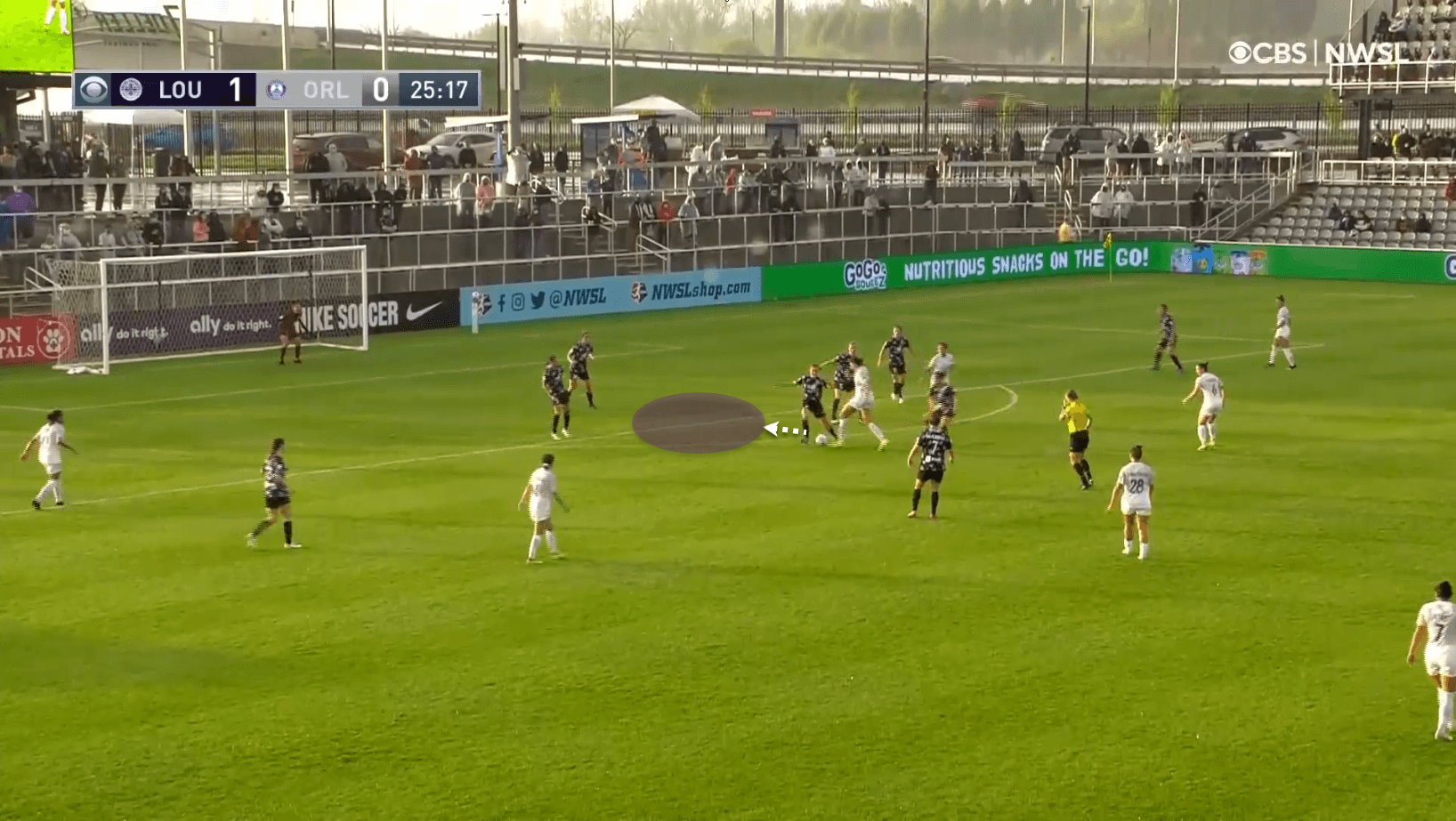 The image above shows Kornieck receiving the ball in a small pocket of space. She takes a touch and nutmegs the midfielder in front of her. This move allows her to size up a shot that eventually goes wide of the net. Few players would have been able to receive the ball in such a tight area and have the skill and strength to carve out a shooting opportunity while under pressure from four defenders.

Kornieck’s skill and size were critical in creating the opening goal for Orlando. In the following image, Meggie Dougherty Howard has drifted into a wide position and found space to cross into the penalty area. The following image shows Kornieck getting in front of her marker, who is considerably shorter, and Kornieck can quickly head the ball in. This goal allowed Orlando, who were outplayed for much of the first half, to go in at halftime with the score tied 1-1. 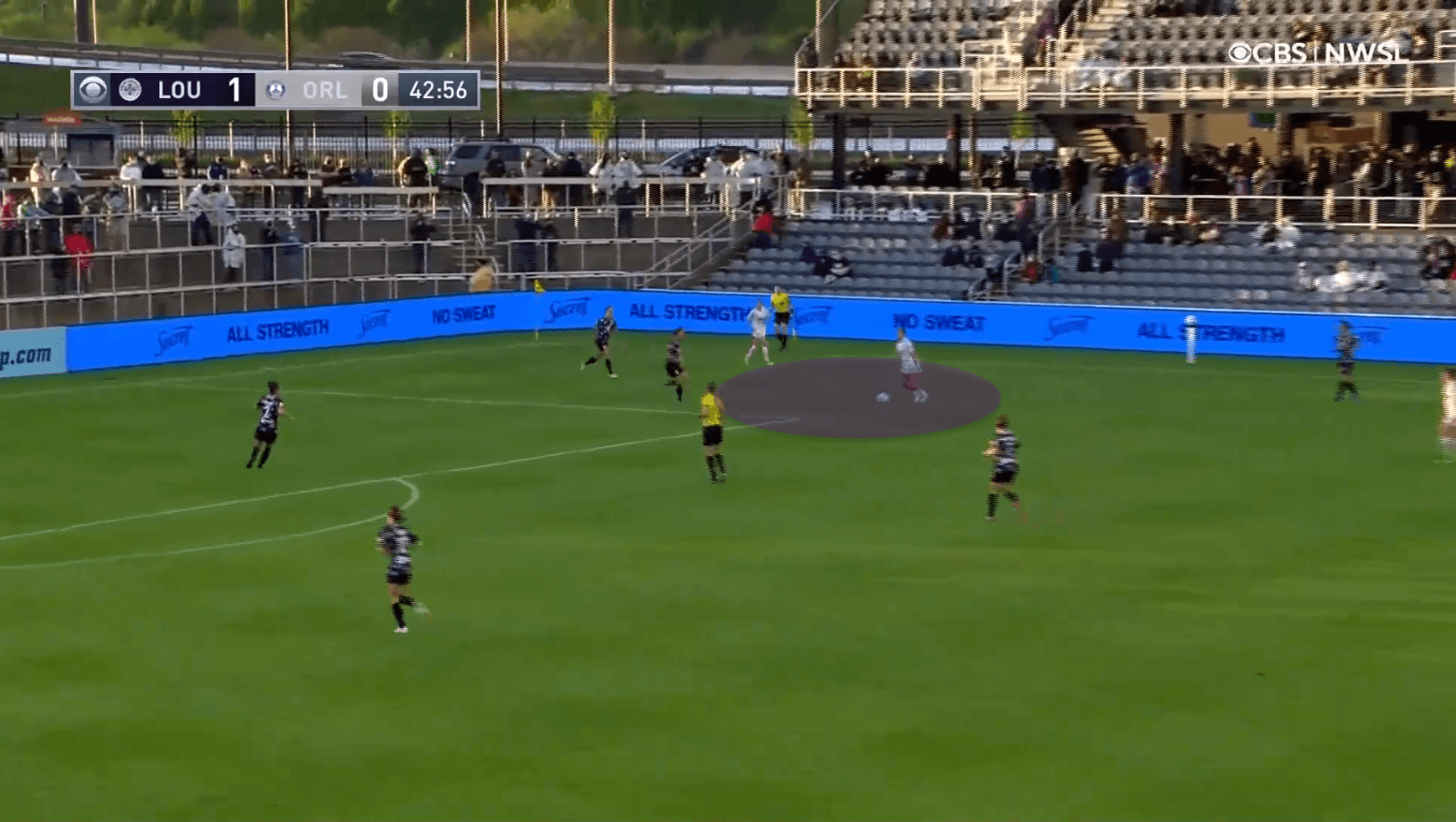 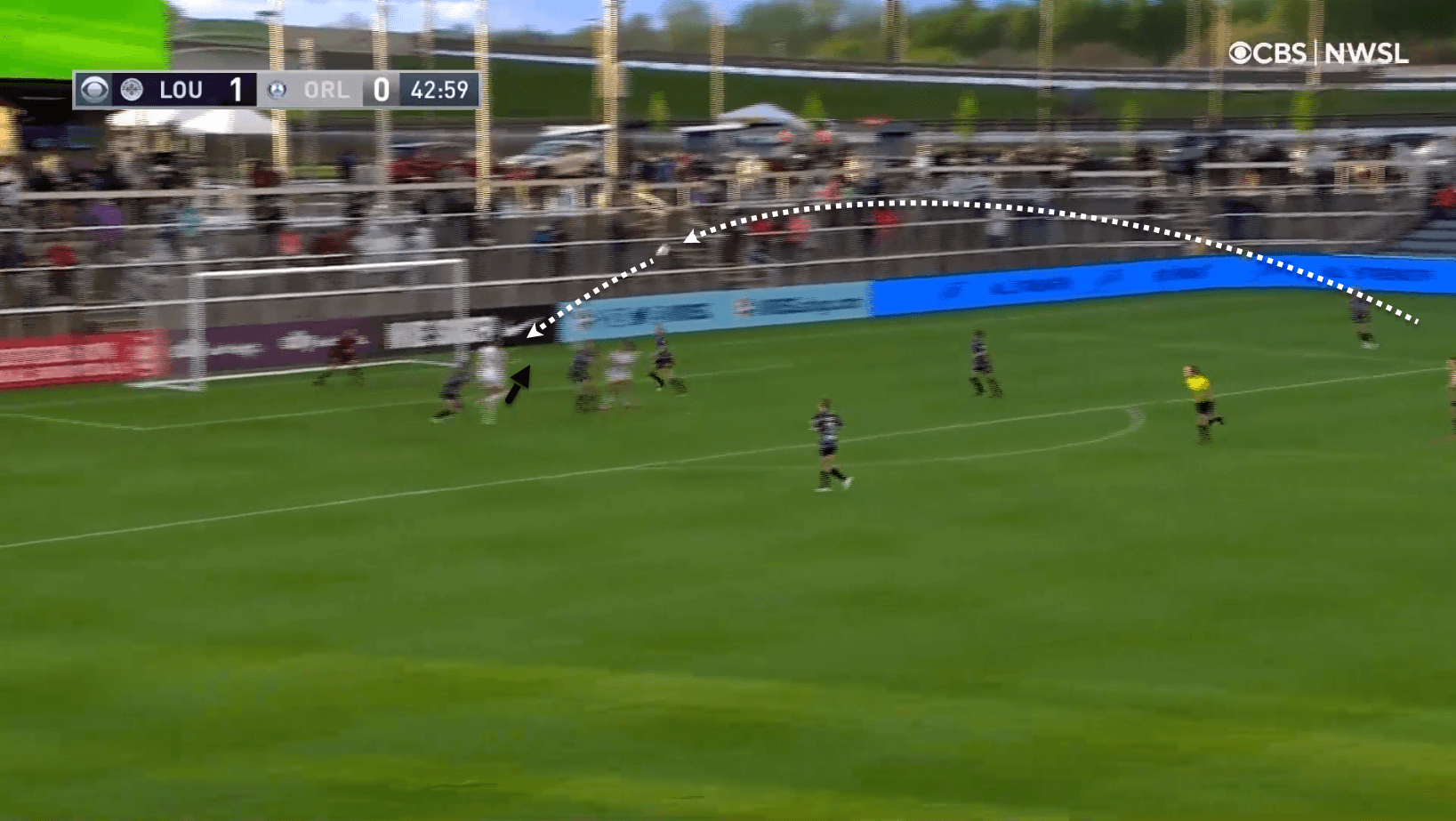 The second half was a much more even affair, but neither side created any clear chances. However, Orlando continued to build pressure on the home side, and it wasn’t until the 88th minute, when legs were tiring, that the next scoring opportunity presented itself.

As Louisville became more stretched, Orlando could counter-attack and use their attacker’s speed to overload the defence. The following image shows Marta, with nobody from Louisville applying pressure, playing an easy pass into the middle of the park for Dougherty Howard. The midfielder has yards of space to run into. 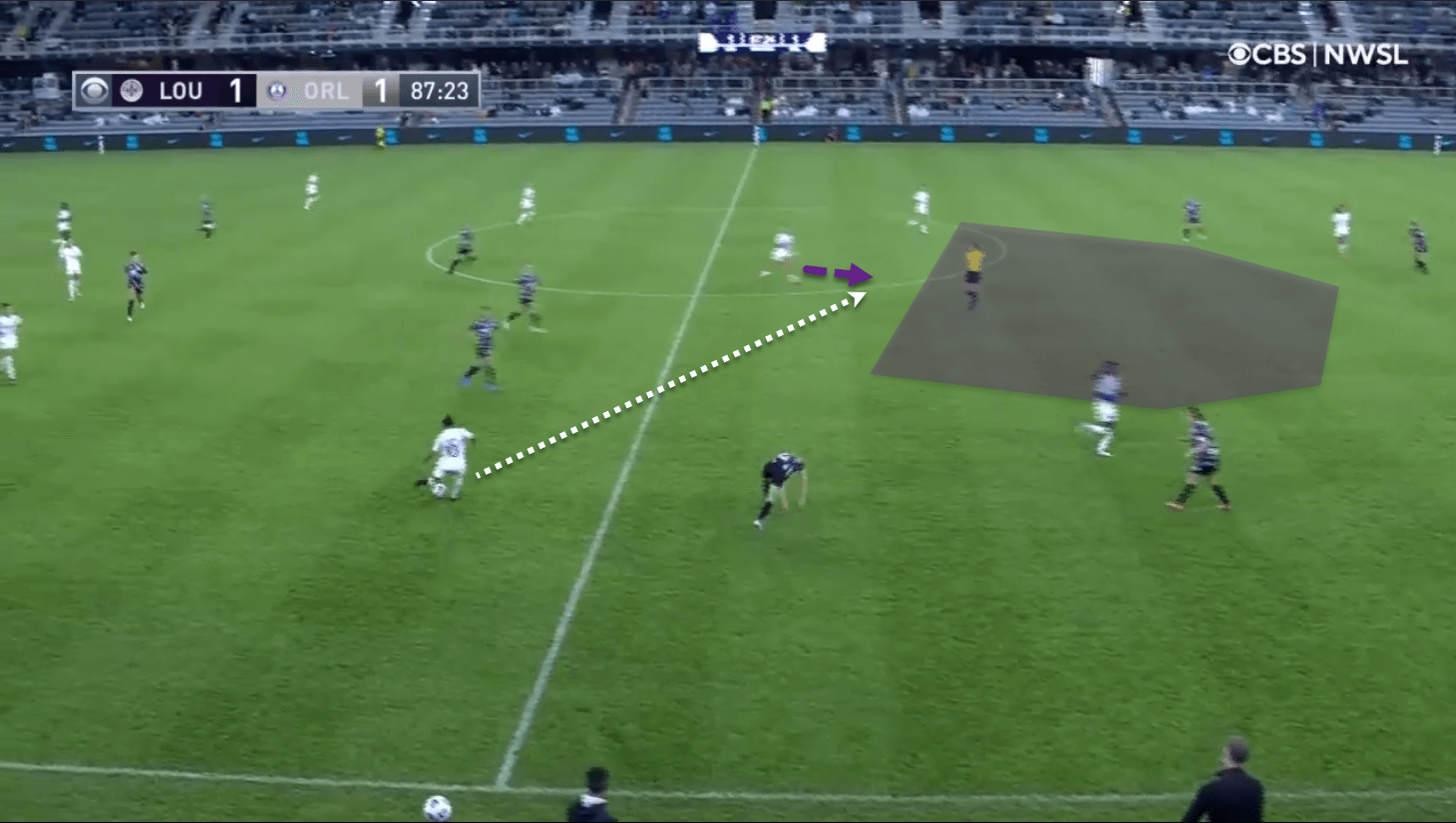 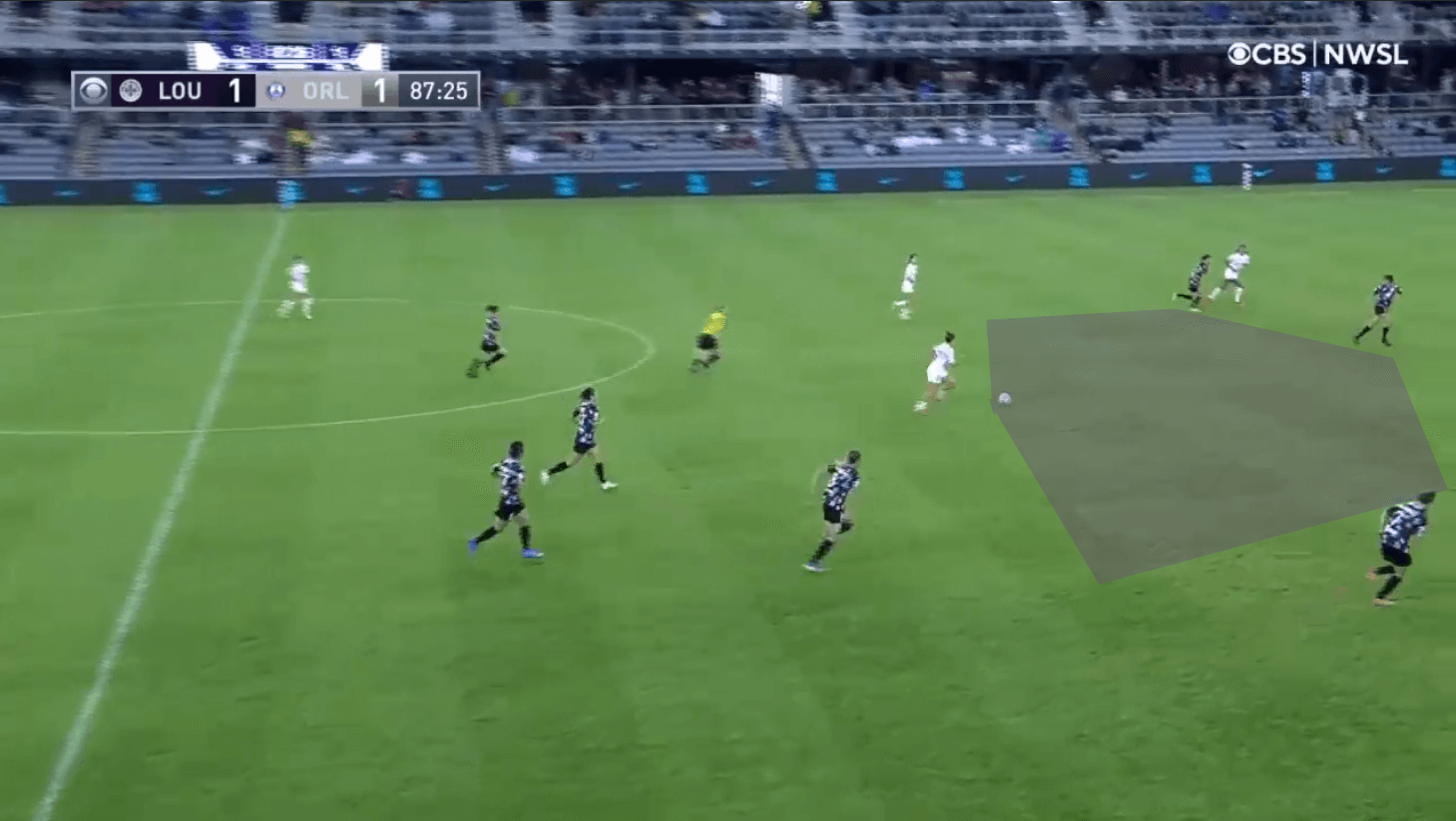 The above image shows the space Dougherty Howard has to operate. One of Louisville’s centre-backs is forced to leave her position to challenge the ball, allowing the midfielder to slide a through ball for Abi Kim easily. The next image shows the space that Kim has, and she’s able to slot the ball home past Betos. 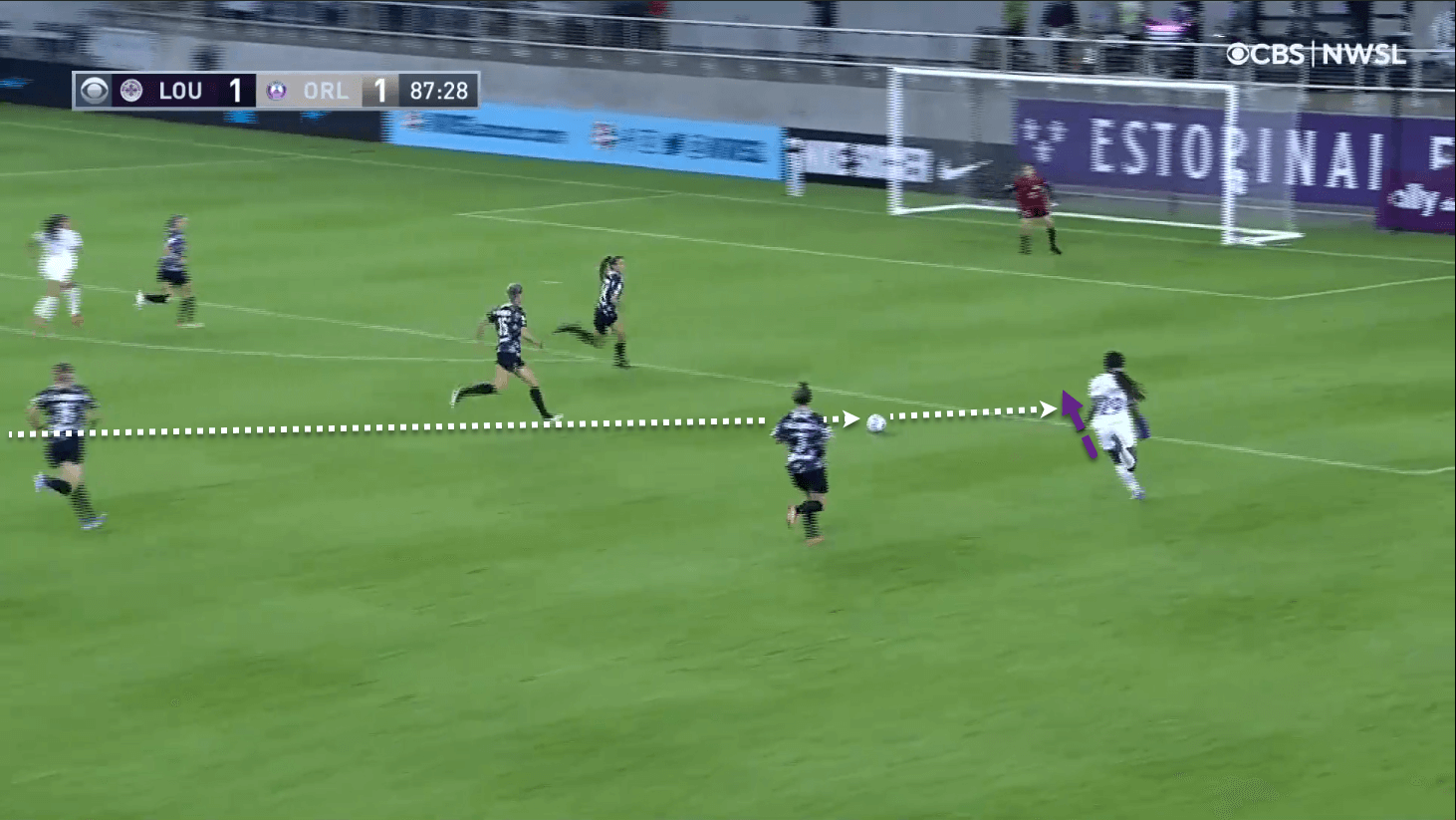 A late goal from a set-piece ensured that both sides came away from this match with a point. If you just watched the beginning 15 minutes of this match, it’s unthinkable that Orlando would have been able to get anything. Their defence was shambolic, and Racing Louisville was able to carve them apart at will. Yuri Nagasato had two quality chances within the first five minutes. It took a torrential rainstorm to stop the flow of chances for the home side finally.

At the end of the first half, a goal ensured that they went into the break at 1-1. An even second seemed like this was going to end 1-1. An Orlando goal in the 88th minute allowed the visitors to take a shocking 2-1 lead and look likely to claim all three points. However, Racing Louisville fought until the end and secured a draw in the second minute of stoppage time with a Brooke Hendrix goal from a deep free-kick.

Racing Louisville will be glad to claim their first point in their first match, while Orlando will struggle to watch the opening 20 minutes of this match without a feeling of shame. With plenty of football left to be played Orlando will have a lot of time to fix their defensive issues.