In La Liga, the race for the title, Champions League spots, as well as the relegation battle, are getting tighter and tighter as the season progresses. At the top, Atletico Madrid have suffered a minor blip in a form that has opened the title race wide open, while at the other end, just one point separates the teams between 17th and 20th place.

Both Real Madrid and Elche have their own ambitions for the season. The former is challenging Atletico for the title while the latter is looking to survive for another season in the top flight. Elche, meanwhile, were also coming into this game off the back of a great victory against Sevilla last weekend. This tactical analysis will look at the tactics deployed by both managers, and we will try and explain where this match was won and lost in our analysis.

Zinedine Zidane decided to alter his line up by shifting the formation from a 4-3-3 to a 3-5-2. For this, he drafted in Sergio Ramos, Vinicius Junior, Isco and Federico Valverde for Toni Kroos, Rodrygo, Marco Asensio and Luka Modric. 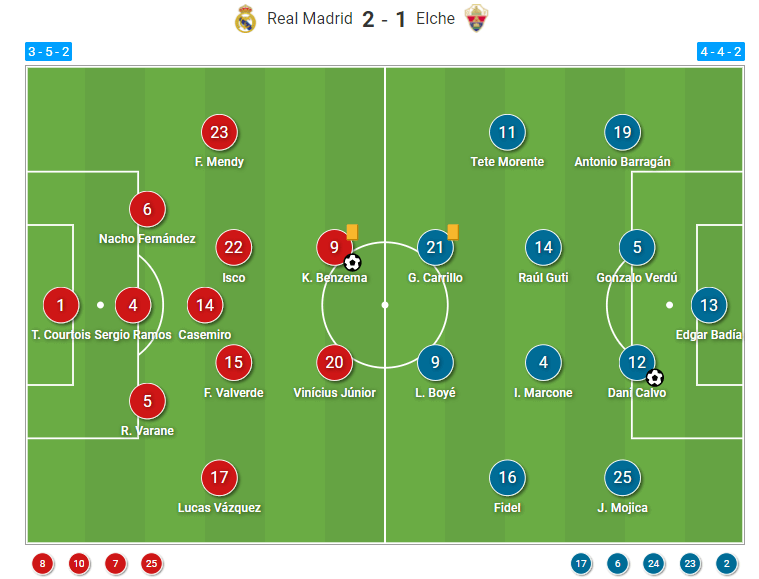 Elche meanwhile made a single change to the lineup that beat Sevilla last weekend. Left-back Josema was replaced by Johan Mojica, as otherwise, they went with the same set of players and system.

Elche set-up in a mid to low 4-4-2 block as they looked to be compact and control the central areas, forcing Real Madrid to the wide areas. From these regions, they would attempt to win the ball and counter-attack immediately. 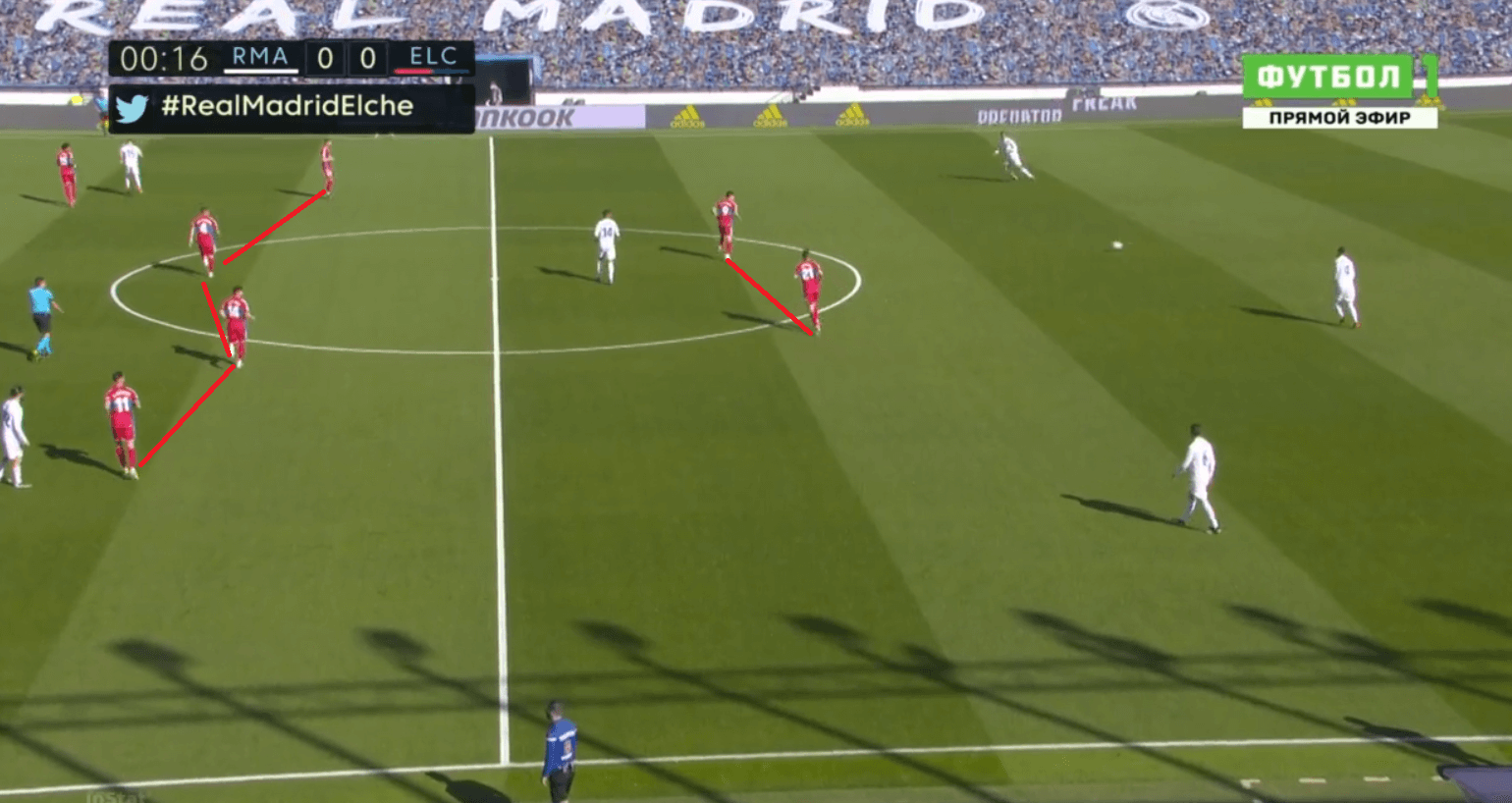 The strange aspect of their structure was that they left huge spaces in between their midfield and forward line i.e their midfield line did not press higher up the pitch in support of the forward line. This is because of Real Madrid’s high vertical distance, leaving Elche with only two options to deal with this. They would have to press high, pushing their midfield and defensive lines up the pitch. However, this would mean a huge amount of space could be left behind the defence that could be exploited by Vinicius or Benzema. The other option is to just push the front line ahead of Casemiro and look to block the passing lanes to him. Leaving such a space was not a big issue since Madrid did not have players dropping into space at times, and even if they did, it was when the ball was on the flanks, by which time the whole Elche structure would be organized to win the ball back. An example of this can be seen in the image below. 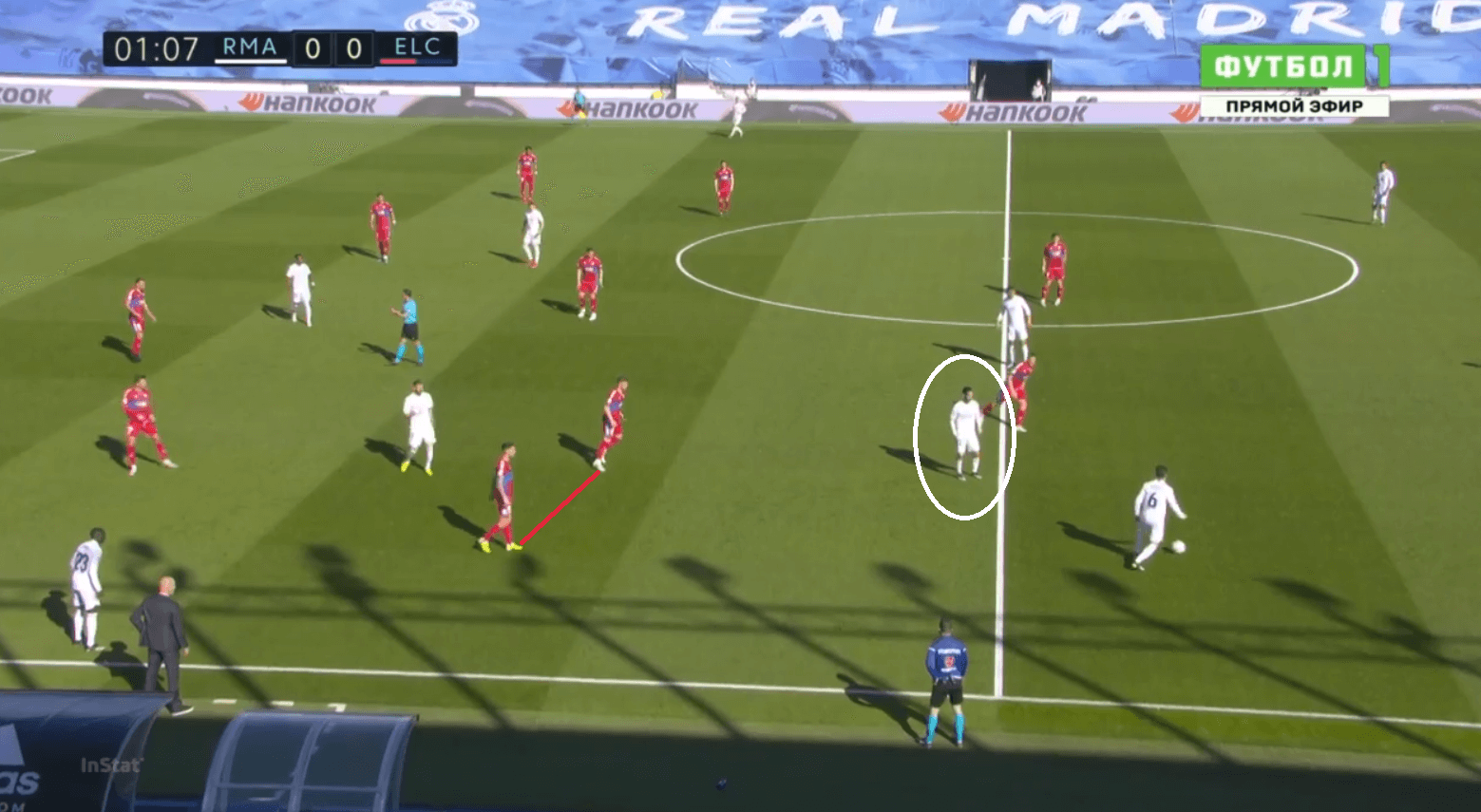 The most important aspect of Elche’s structure was their discipline on the pitch. They looked to maintain their positions and have good coverage of the zones they occupied. Like every other team that uses a 4-4-2, Elche also used a zonal defensive system, with a good balance between man-oriented and position-oriented marking. This meant that the far side flank could have a huge amount of space but Elche were willing to have that trade-off to restrict Madrid’s ball side progression. 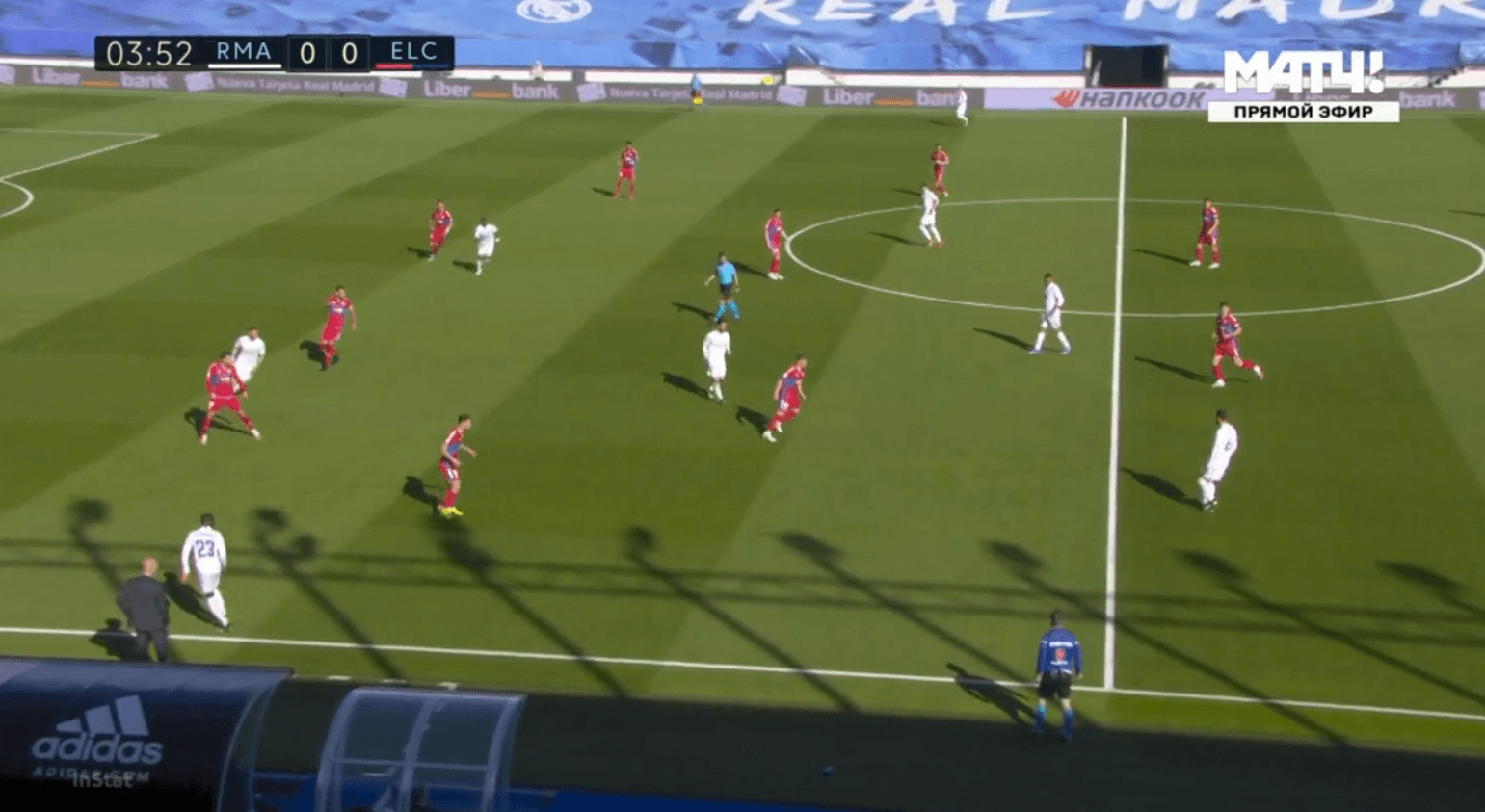 The right-back’s body positioning in the above image shows that he is showing the player outside with his body, and when the ball was played to Ferland Mendy on the flanks, he would immediately press him while the centre-backs would shuffle across to cover Benzema and Vinicius. The wide midfielder’s position here is for two reasons. First, to stop the initial pass to Mendy, and if that pass is, in fact, played then his next job is to protect the half-space or track runners, especially Isco. down that flank. 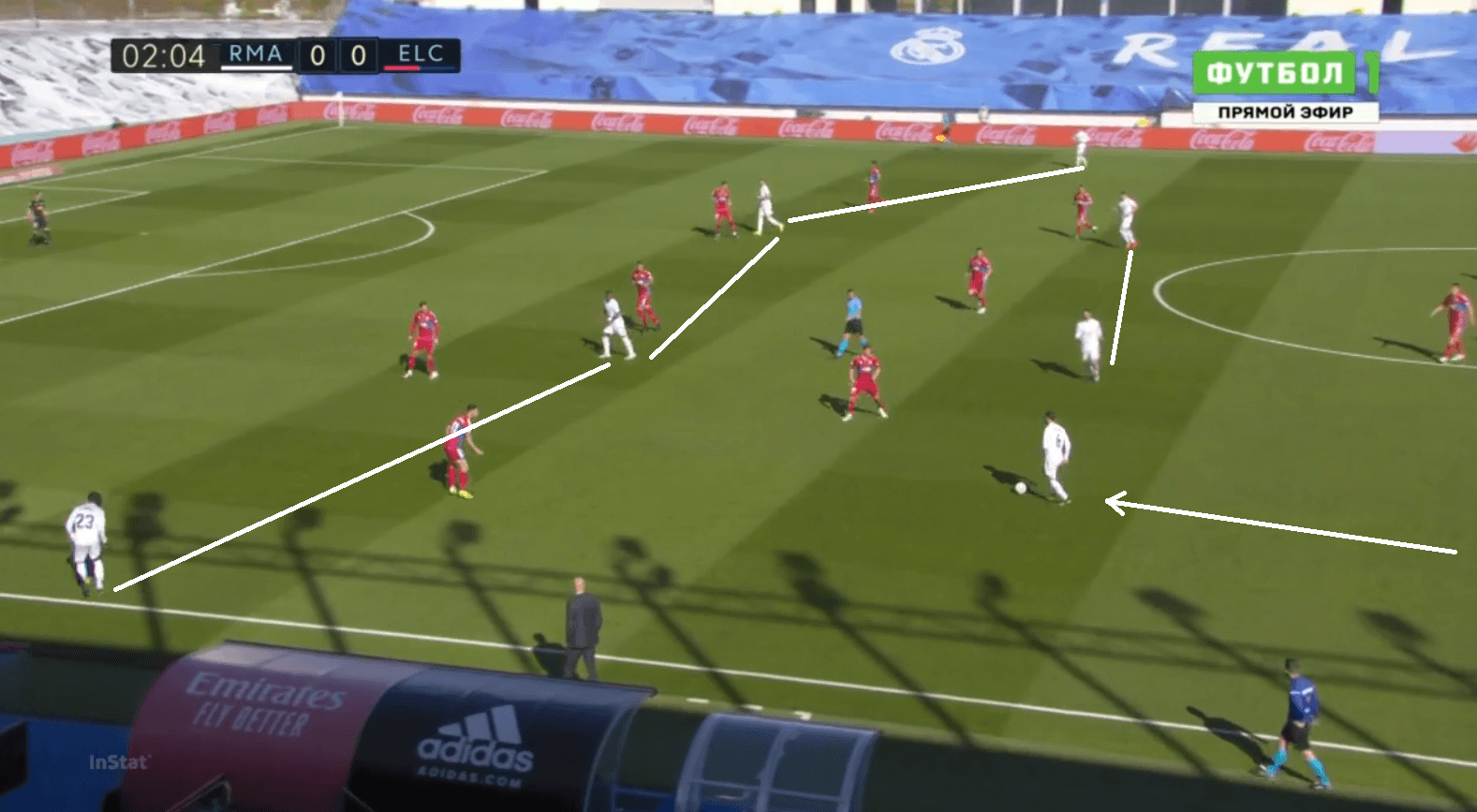 The Elche front two mostly focused on covering Casemiro and blocking the lanes to him. This meant the Madrid centre-backs were left free to run into space forward, as we see how Nacho has run into space in the above image. Nacho does not have good options to pass to, however, as Elche’s players around the ball are positioned well while also having very good body postures. The wide midfielder shows the inside, this means that if a through ball is played he can look to intercept that and also look to create a cover shadow to block the passing lane to Mendy. The right-back is facing the outside, this means if a ball is played over the top he’ll be the one who will move out to the wing to engage with Mendy while the wide midfielder will move inside to protect the interior and his posture facilitates that.

Elche’s disciplined defending can be noted statistically as well where they restricted Real Madrid to very low-quality shots. Despite attempting 17 shots, 13 of them had an xG value less than 0.1. The image below shows Elche committing a lot of players inside the box and we can see the ‘bus’ restricting Real’s space. 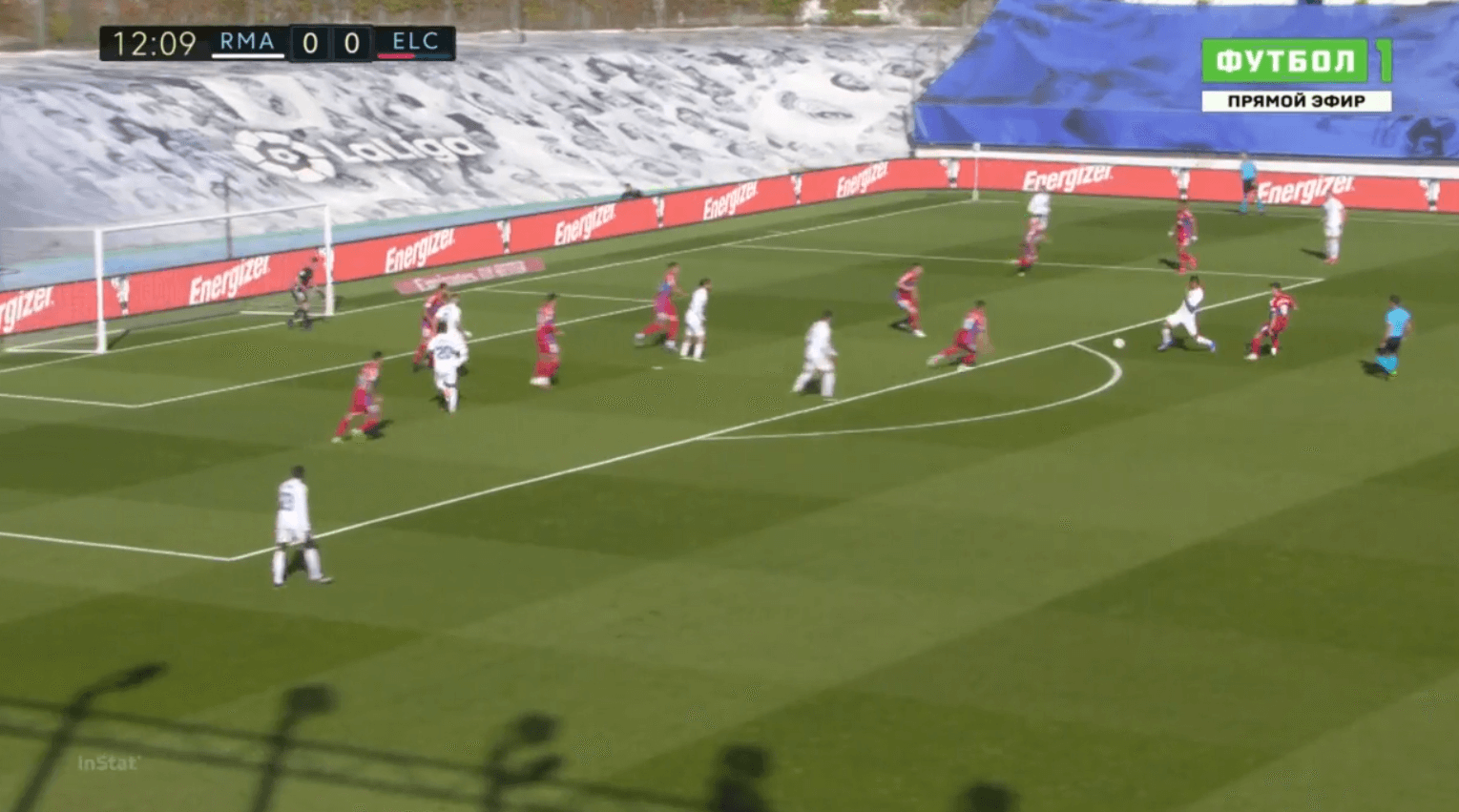 Though Elche were brilliant without possession and always looked to suffocate Madrid by not conceding the spaces that the Madrid players needed to operate in, Madrid themselves were to be blamed for their performance with the ball. This wasn’t just a structural issue – Madrid’s decision-making in the game was also quite poor, so that they were not able to take advantage even when their structure was good. They lined up in a 3-1-4-2 system that converted into a 3-1-6 in possession, with Casemiro as a single pivot in a 3-1 shape against Elche’s front two. The shape can be seen in the image below. 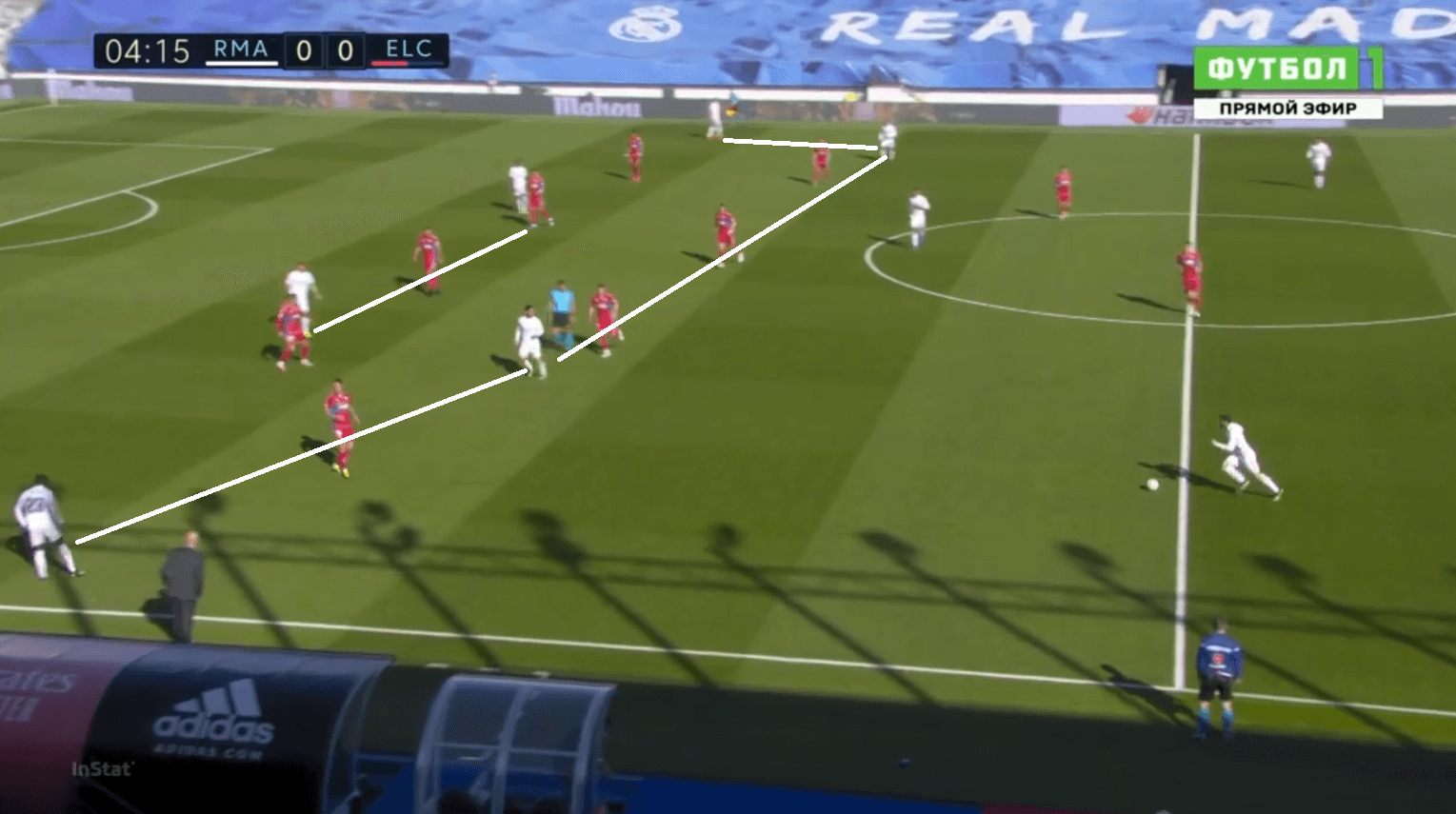 We can see how the Madrid players have lined up in a very good shape and structure that has good spacing between the players horizontally. The front two, Benzema and Vinicius, position themselves exactly in between the centre-back and full-back. This means that all four players in the Elche backline are pinned by these two Madrid players. This opened up the spaces on the flanks for the wing-backs. We see Nacho driving forward since the Elche front two do not pressurize the centre-backs, giving the wide centre-backs in Madrid’s back three space to move ahead. Since Nacho is coming forward, he might have the attention of the wide midfielder for a brief amount of time. It is at this time that Mendy makes a run forward. Nacho could have easily played a ball over the top to him and his overlaps could have created a problem. 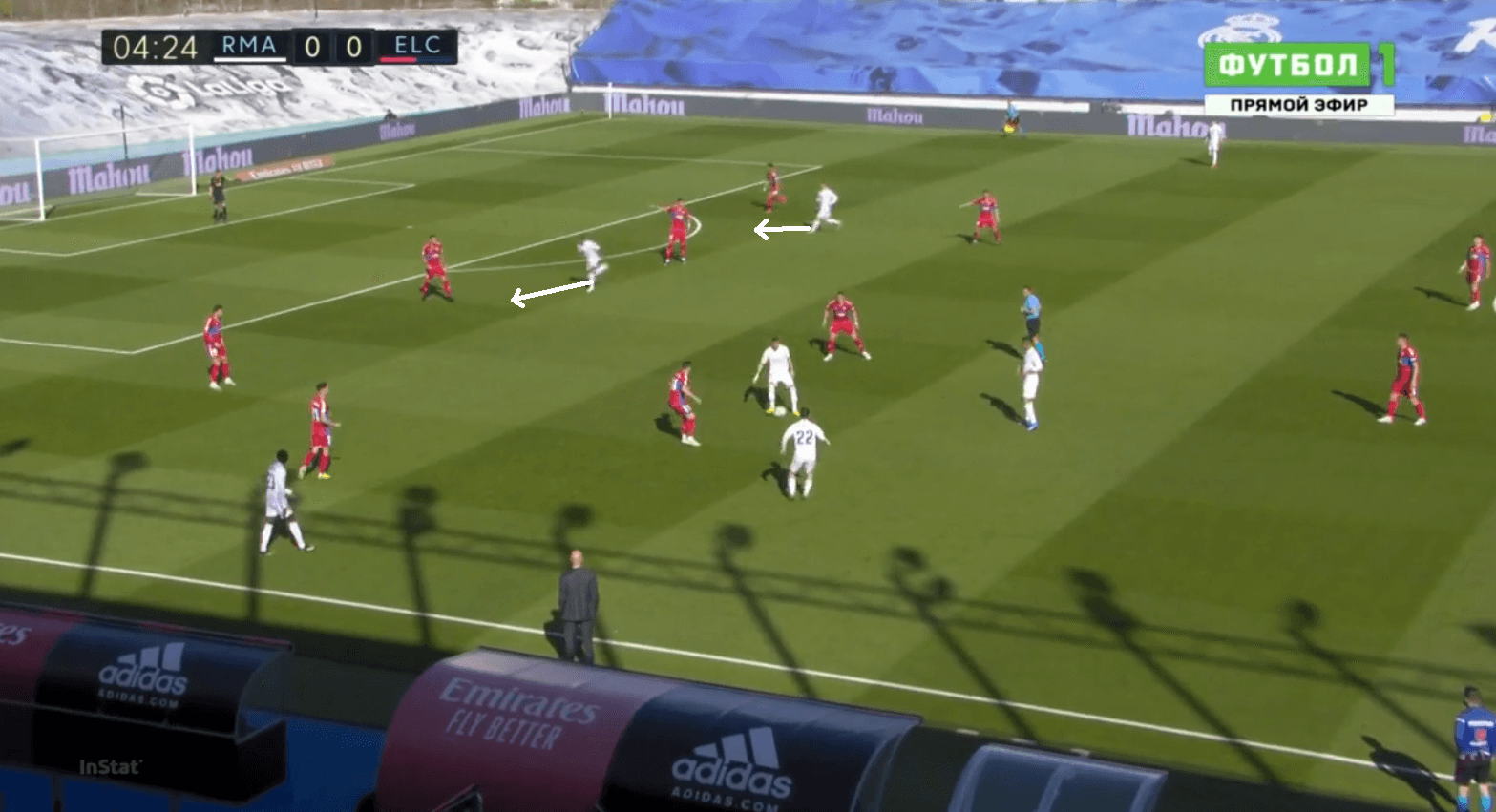 In the above example, Madrid’s two players higher up the pitch – Valverde and Vinicius make runs centrally that drag the defence with them as they move into central positions. This could have been the right time for one of Isco or Nacho to switch the play across the field to Vasquez. But Madrid fail to do that and they miss the chance to stretch the Elche defence. Since most of the players were on the same flank, this crowds that side of the pitch, making it easier for Elche to defend. Madrid did not use the central areas – only 18% of their attacks in this match came through the central channels. This is understandable due to Elche’s compact 4-4-2 shape. However the split of attacking duties with respect to the flanks shows that they were pretty unbalanced. They used their left flank 47% of the time while the right flank was used only 35%. Focusing on one particular flank also made it easier for Elche to defend. 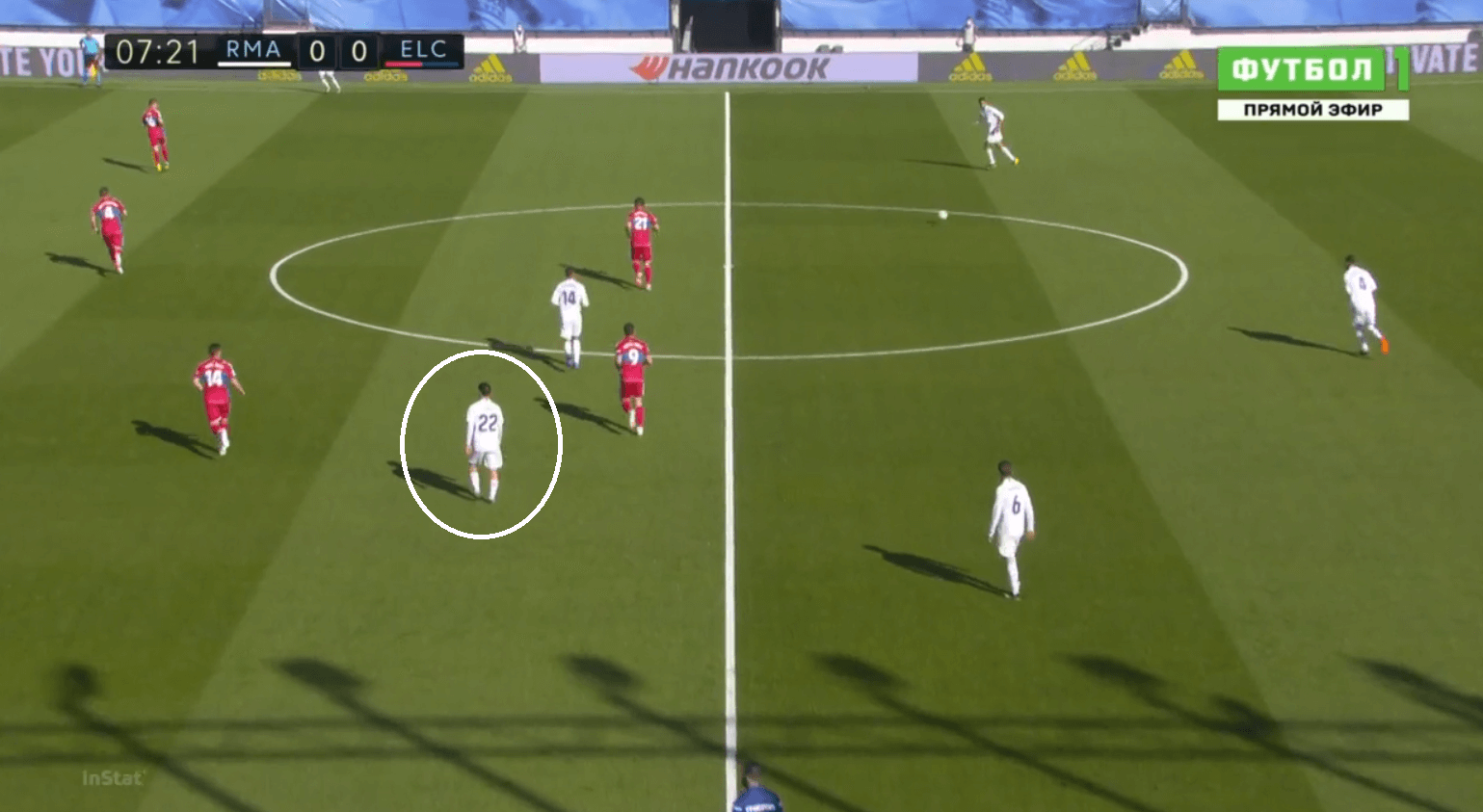 We can Isco dropping deep during the build-up phase to help Madrid build-up on the left flank. However, on the right flank, Valverde didn’t drop and was told to stay higher up the pitch. This was still feasible at times since Madrid could still have Varane driving forward with the ball on the flank, as the image above shows. Immediately after this, Varane moves to the wings after Vasquez carries the ball inside. This showed good rotation and movement up until there. But Vasquez messed it up with a high back pass (white arrow) to Nacho instead of playing a pass to Isco (black arrow) who has good space around him. 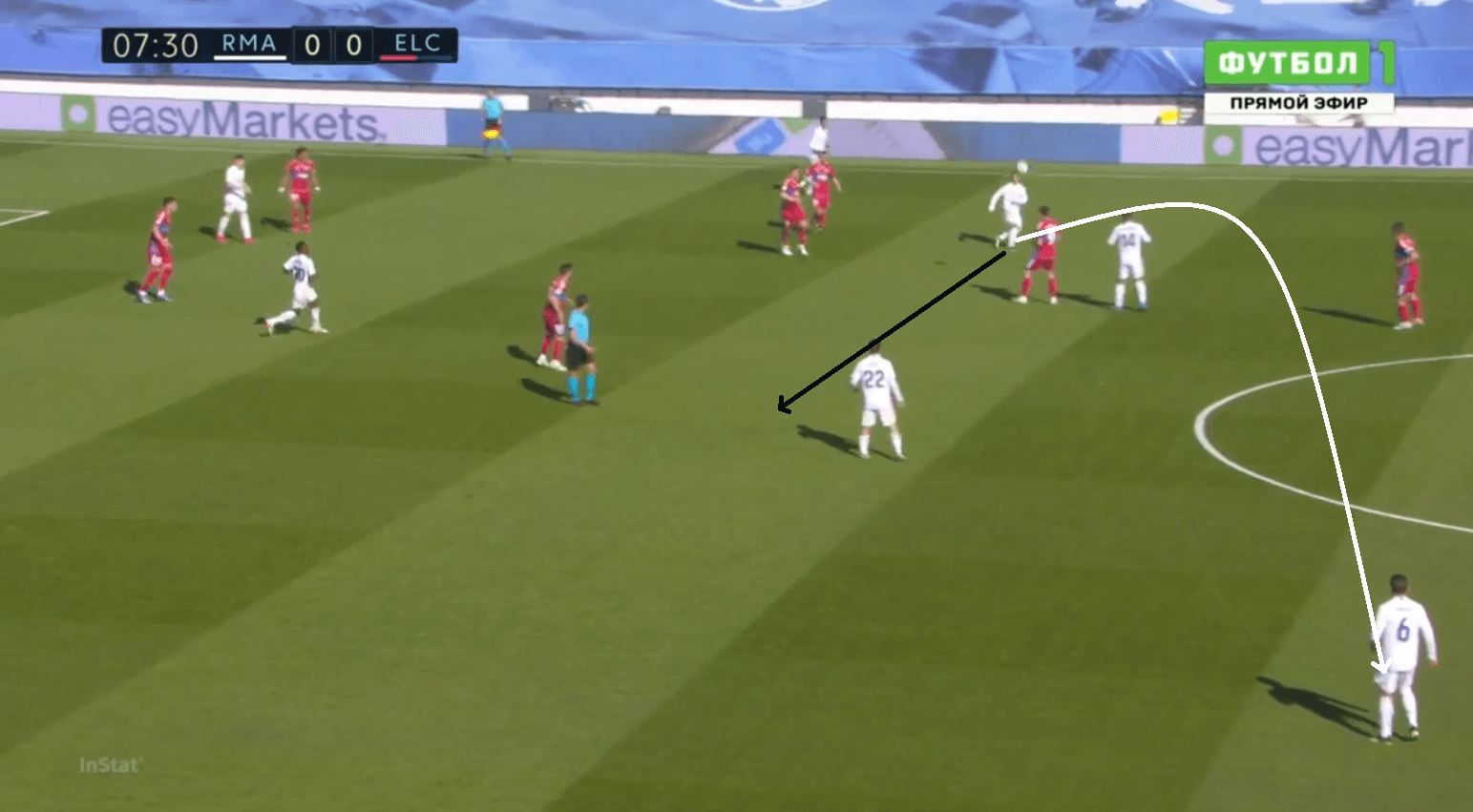 Benzema was heavily involved, as he would drop deep and would drag defenders along with him. This was to create space for the likes of Vinicius or Valverde to exploit. But Elche defended these well with discipline and were conscious of this movement from the Real players. Vinicius, in particular, was constantly threatening as he looked to stretch the defence vertically with well-timed runs. 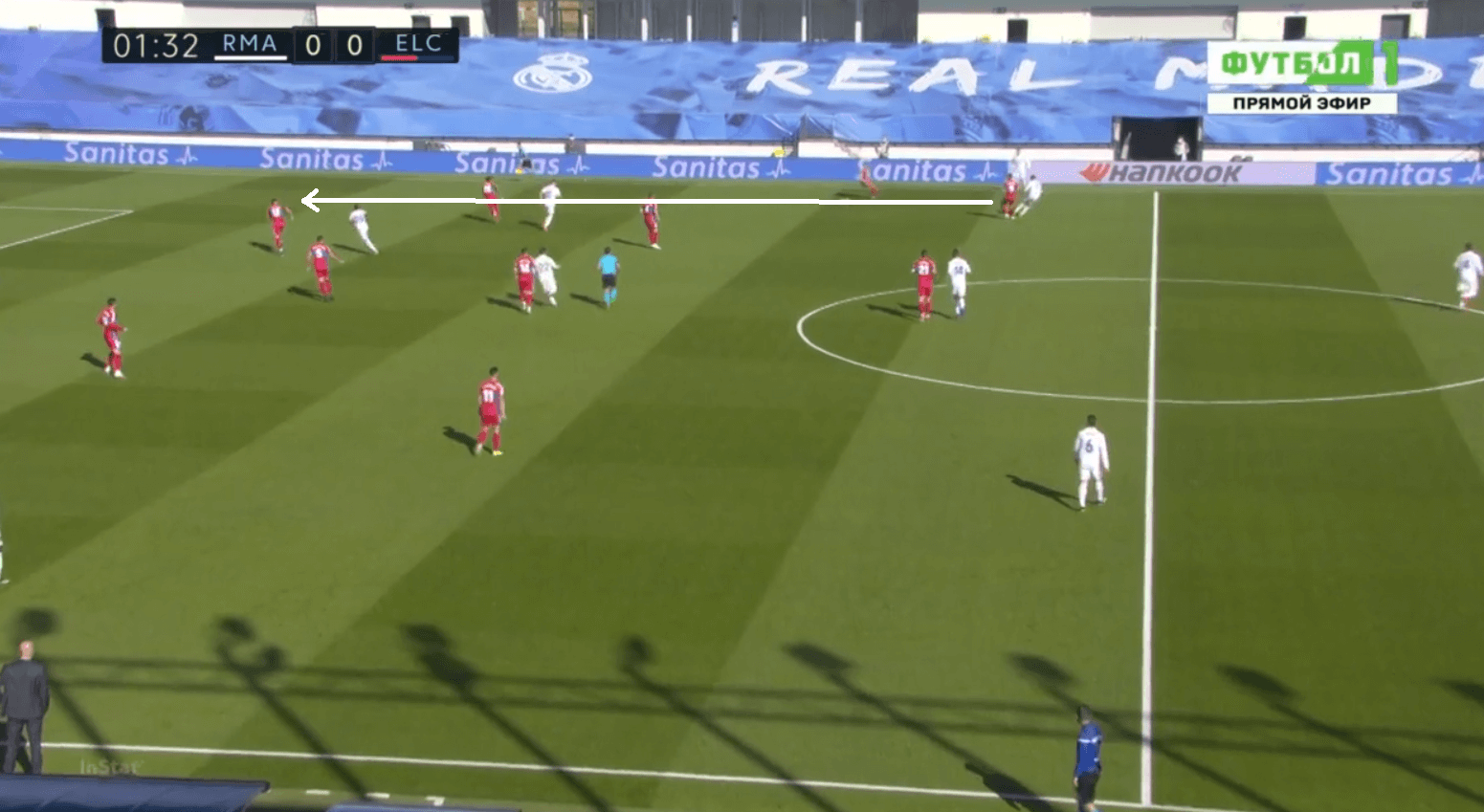 Elche use Real Madrid’s right flank to cause issues

Elche too looked to attack a specific flank to threaten the Madrid backline. 47% of their attacks came down the right flank, which was also the flank where Madrid concentrated their attacks (Madrid’s left). They would usually look to win the ball on the flank, and with most of the Madrid players higher up the pitch, they would then attack the space. In the image below, we see Ferland Mendy very high as Madrid have pushed players up the pitch to attack. Elche then look to attack that flank. 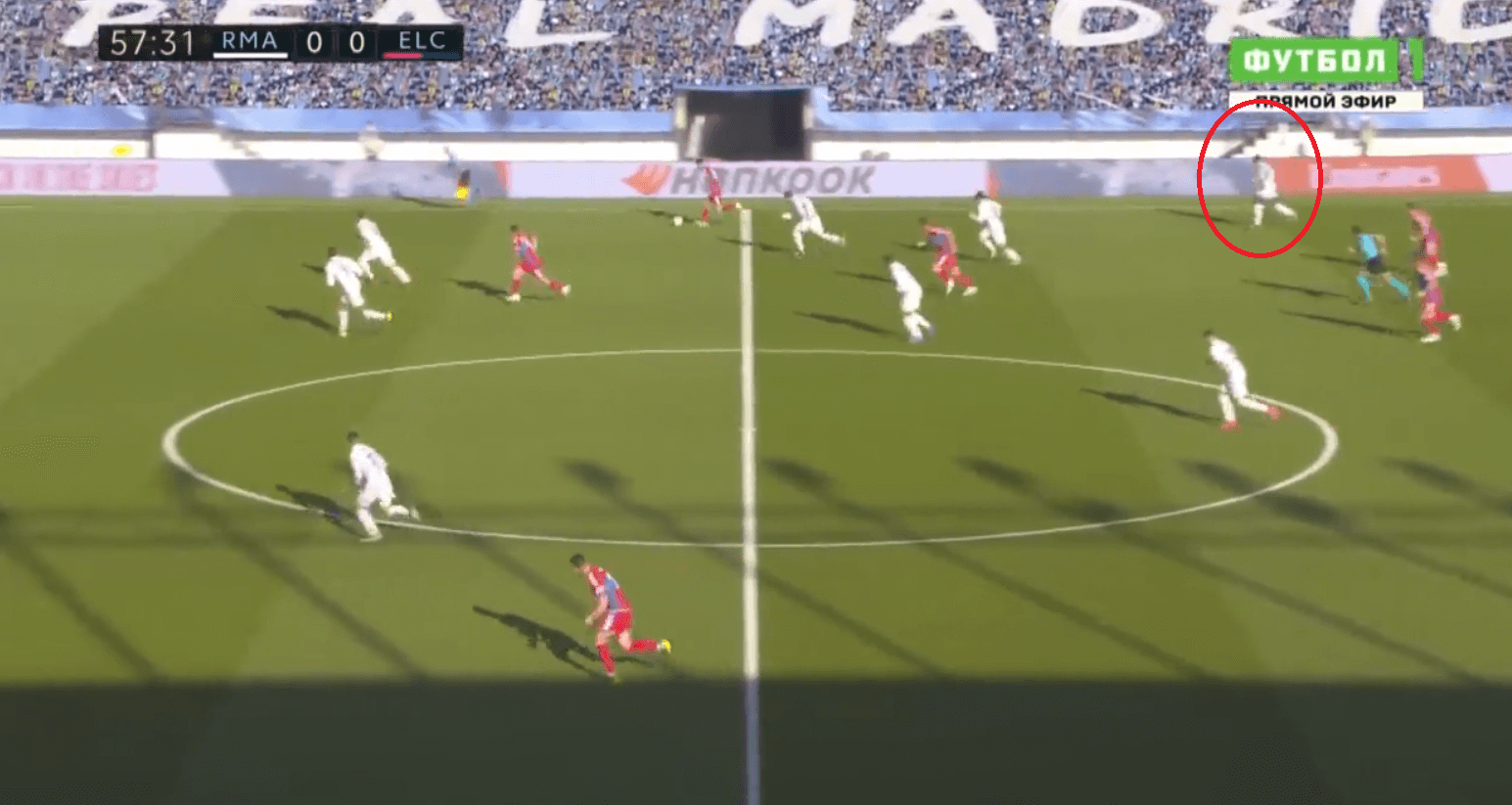 Though they created just three shots, they got behind the Madrid defence numerous amount of times during counter-attacks, most of which came down their right flank.

In the end, Madrid were able to register a comeback in the dying moments as Benzema bragged a superb brace to win them the three points. The late surge means that Elche’s effort went in vain, which is a harsh result given how they had managed to keep Madrid at bay for most of the game.

This win took Real Madrid six points behind Atletico Madrid at the top, who had to settle for a draw against Getafe a few hours later and thus opened up the title race a little bit further, with 11-12 games to go in the season.