The 26th game week of the 2020-21 Premier League season saw runaway leaders Manchester City host 4th place West Ham. Both the teams are on the back of impressive displays in their previous encounters. David Moyes especially would be content to see his team put in some impressive shift every week.

Manchester City, meanwhile have been empathic on the back of a tremendous 19 game-winning run across all the competitions. While the teams around them have dropped points over the past 2 months, they have remained clinical and impeccable in various games. This tactical analysis will discuss the tactics deployed by both managers. Let’s begin the analysis.

After their clinical performance in the Champions League against Borussia Mönchengladbach, Pep decided to make some alterations to his team keeping in mind the double game week. Sterling, Cancelo, Rodri, Foden and Jesus made a way out for Torres, Mahrez, Fernandinho, Kevin de Bruyne and returning Sergio Aguero respectively. 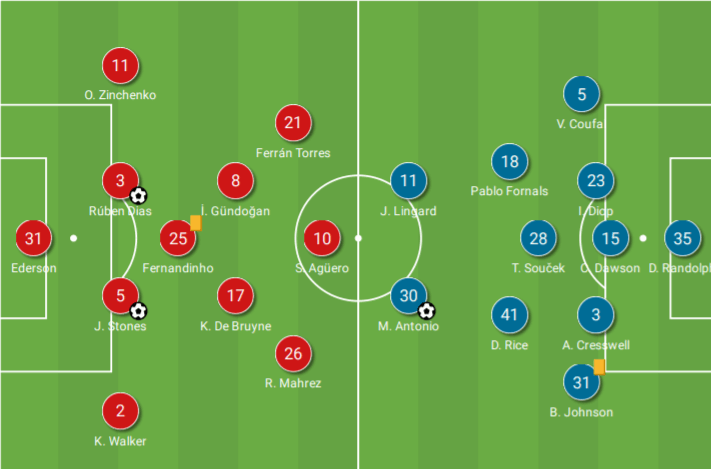 West Ham meanwhile made a single change to the lineup that won the London derby last week. Ben Johnson came into the lineup for Jarrod Bowen as Moyes looked to change his shape into an asymmetric structure.

David Moyes went with a 5-4-1 defensive setup, his preferred one this season. It looked to tighten things at the back with an additional body of protection offered. The main strategy was to lock the interiors by squeezing the space and forcing the City players outward to the flanks. The 3 forwards along with the 2 central midfielders formed a good central block with optimal body postures that City found unpleasant. Also, the space between the lines was very less with West Ham opting for a comparatively higher line for a mid-block. The image shows an example of that and City has to go outward with no available space in the centre. 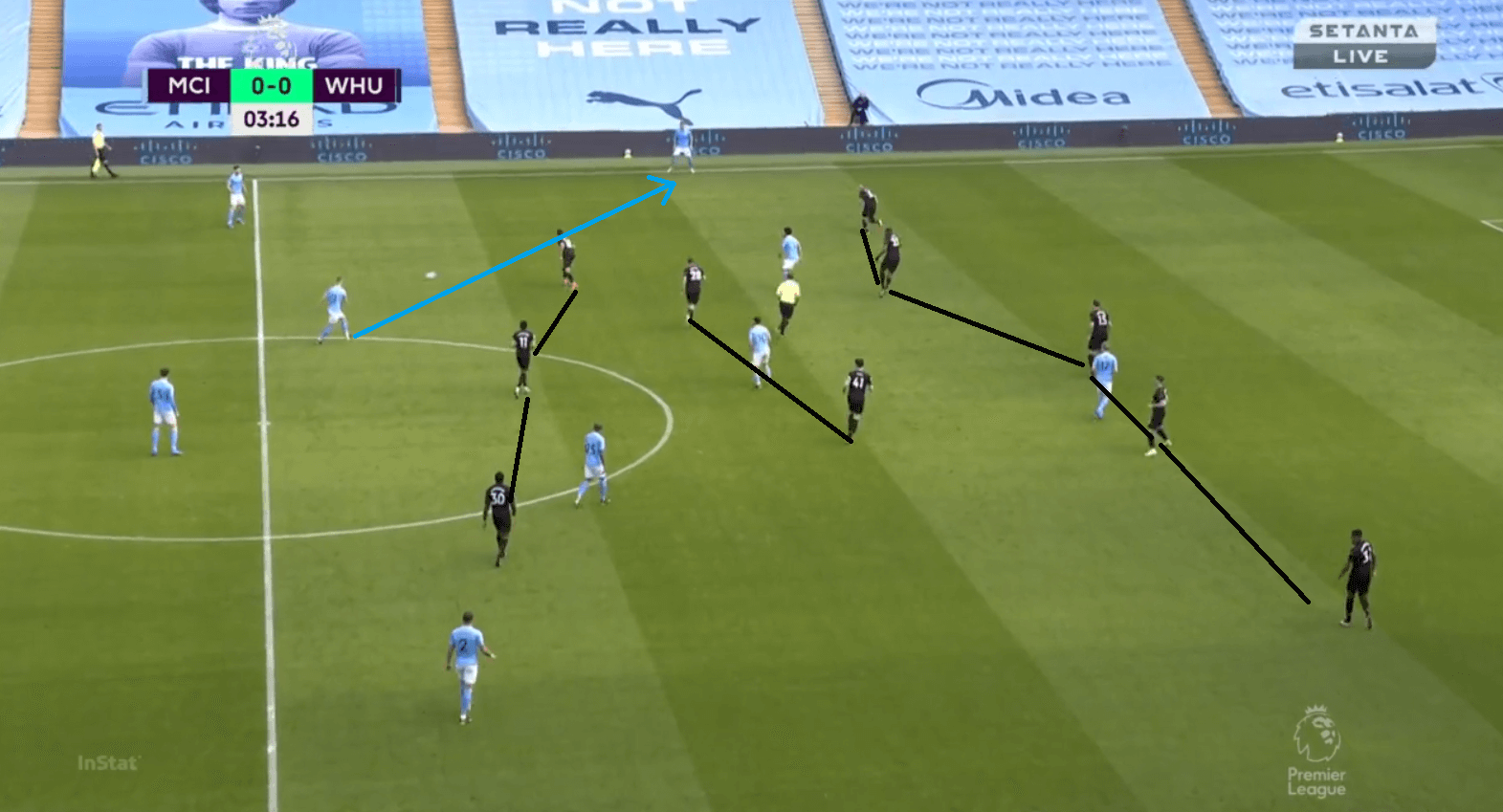 The strange aspect of this was it wasn’t exactly a 5-4-1 and more of a 5-2-3 / 5-3-1-1 at times (asymmetrical in shifting to each other), which is a riskier structure as it leaves space exposed in the half-space just behind the one of the wide defensive front-3. This requires heavy communication and awareness among the players to ensure the lanes are completely blocked at the right angle. Another advantage that Moyes had with this against City was no player were able to drop into that space as it would go against their principles of positional play. Guardiola expects horizontal stretching from his players with each of them occupying different lanes across the pitch and no two players at the same lane. City are already looking for a vertical stretching with De Bruyne high up and occupying CBs with Aguero dropping deep. Walker and Fernandinho cannot go into that space beside Rice as that would expose the defence against West Ham forwards. The only other option is for Mahrez to drop but that would mean no horizontal stretching for the Blues. As the game went on the structure became much more clear with West Ham opting for the asymmetricity. 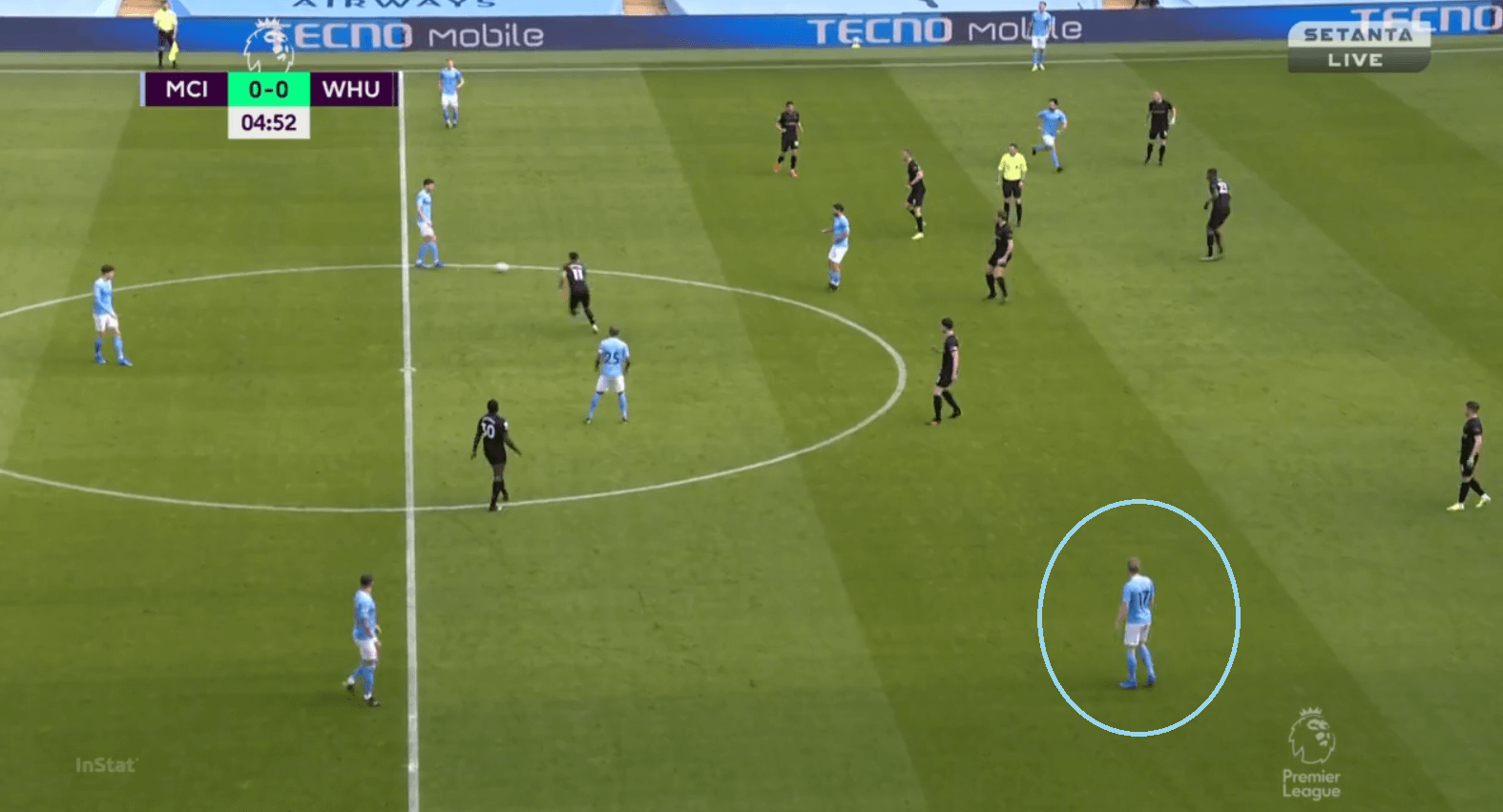 De Bruyne is now in a very good position, but the issue was to get him access to the ball. We can see Dias not having a single viable passing lane open to the Belgian and all he can do is to recycle it to the flanks. West Ham structure here is extremely good with optimal body positioning. 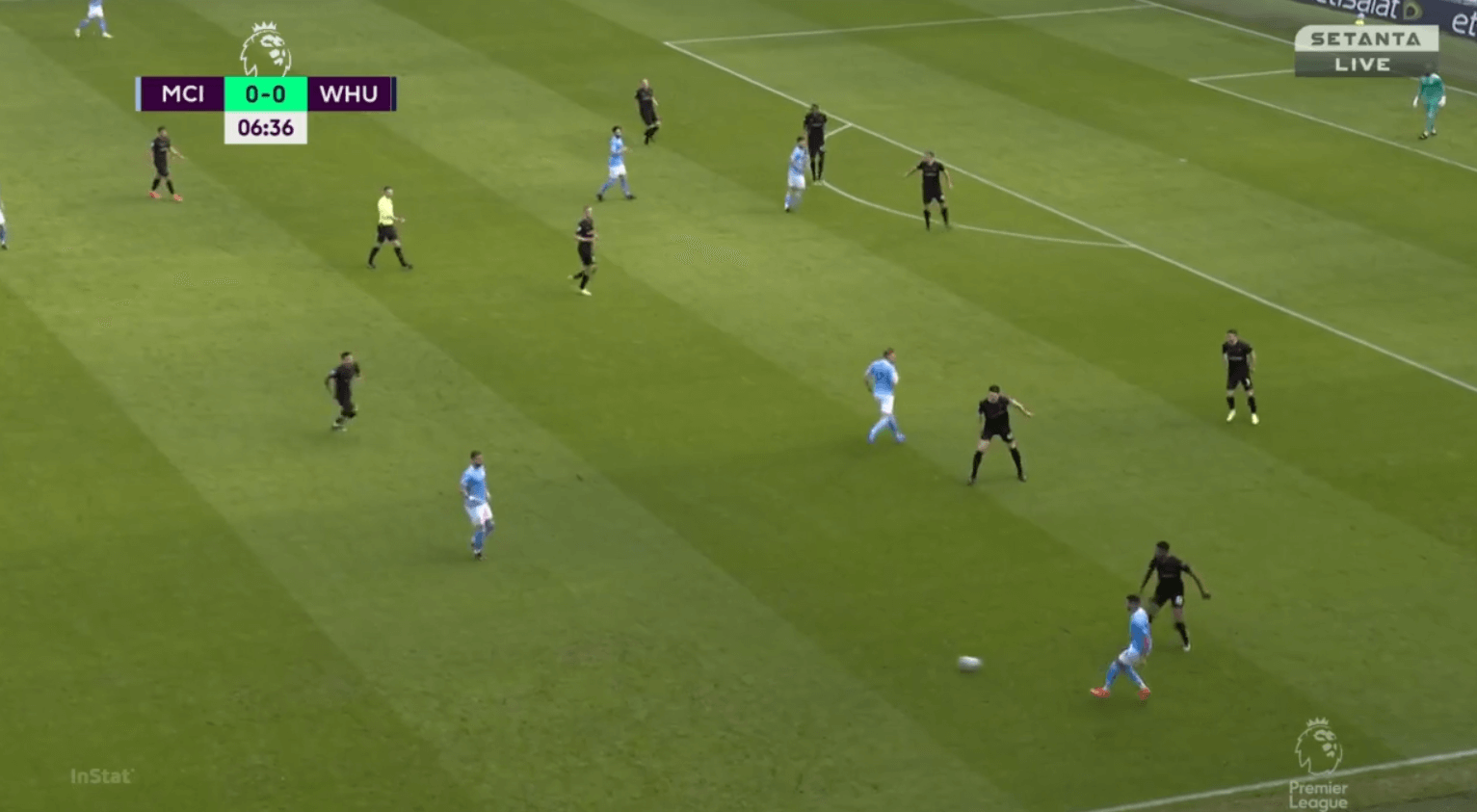 West Ham were also able to commit numbers in the wing and when they weren’t able to squeeze space they would look to have the right numbers to keep track of any 3rd man runs from the West Ham players like in the image above. They were easily able to outnumber the City players with a 4v3 or a 3v2 situation. Even when City entered the final third after quite a struggle, West Ham would gather a good amount of numbers inside the box and they defended it extremely well. 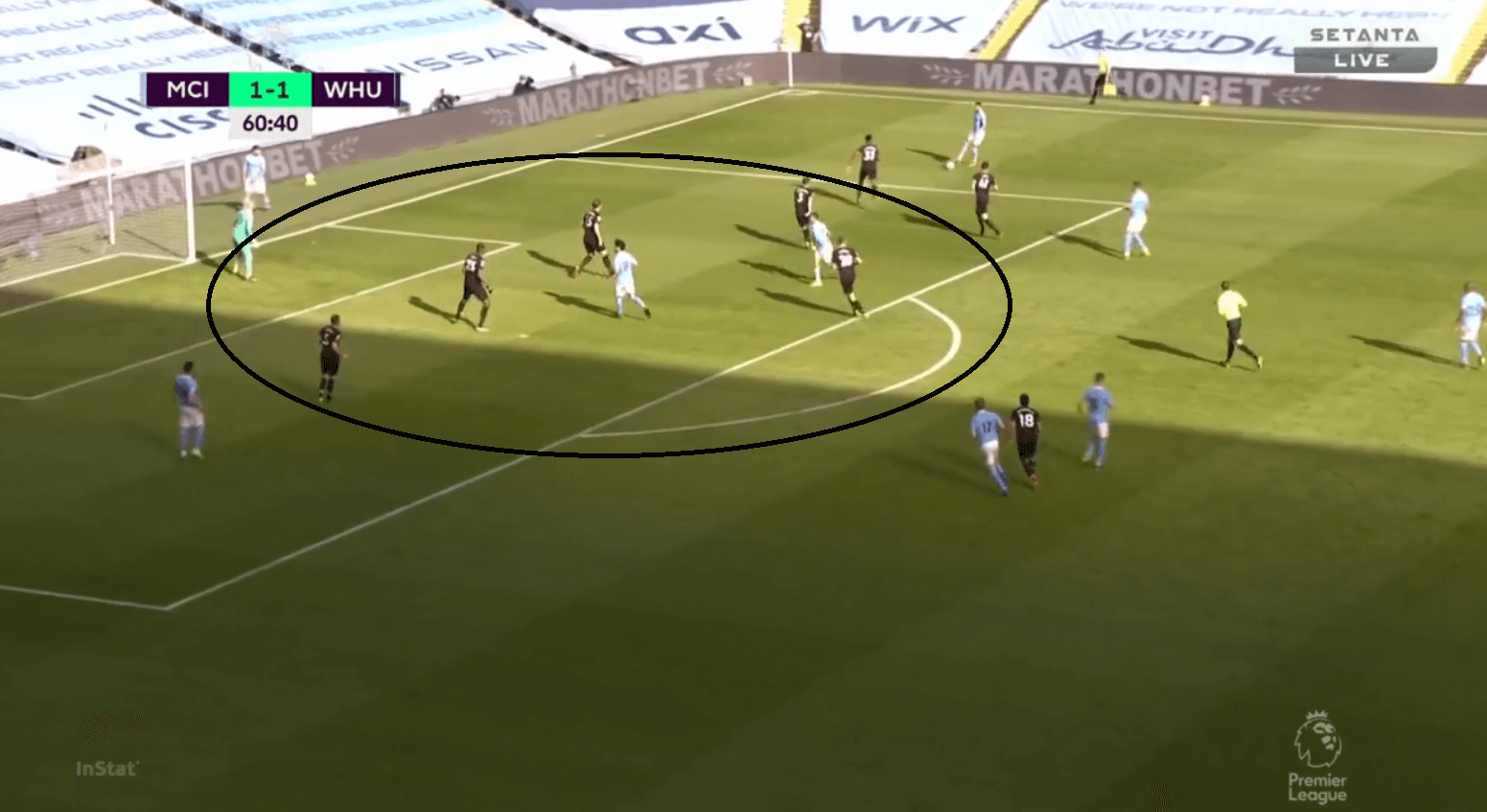 Another brilliant aspect of their structure was the level of zonal defending incorporated. It’s straightforward to deploy a man-marking against City’s midfield and forward line and look to win duels in an individualistic manner but Moyes knows has drilled some good defensive principles into his players to get the best out of the team. 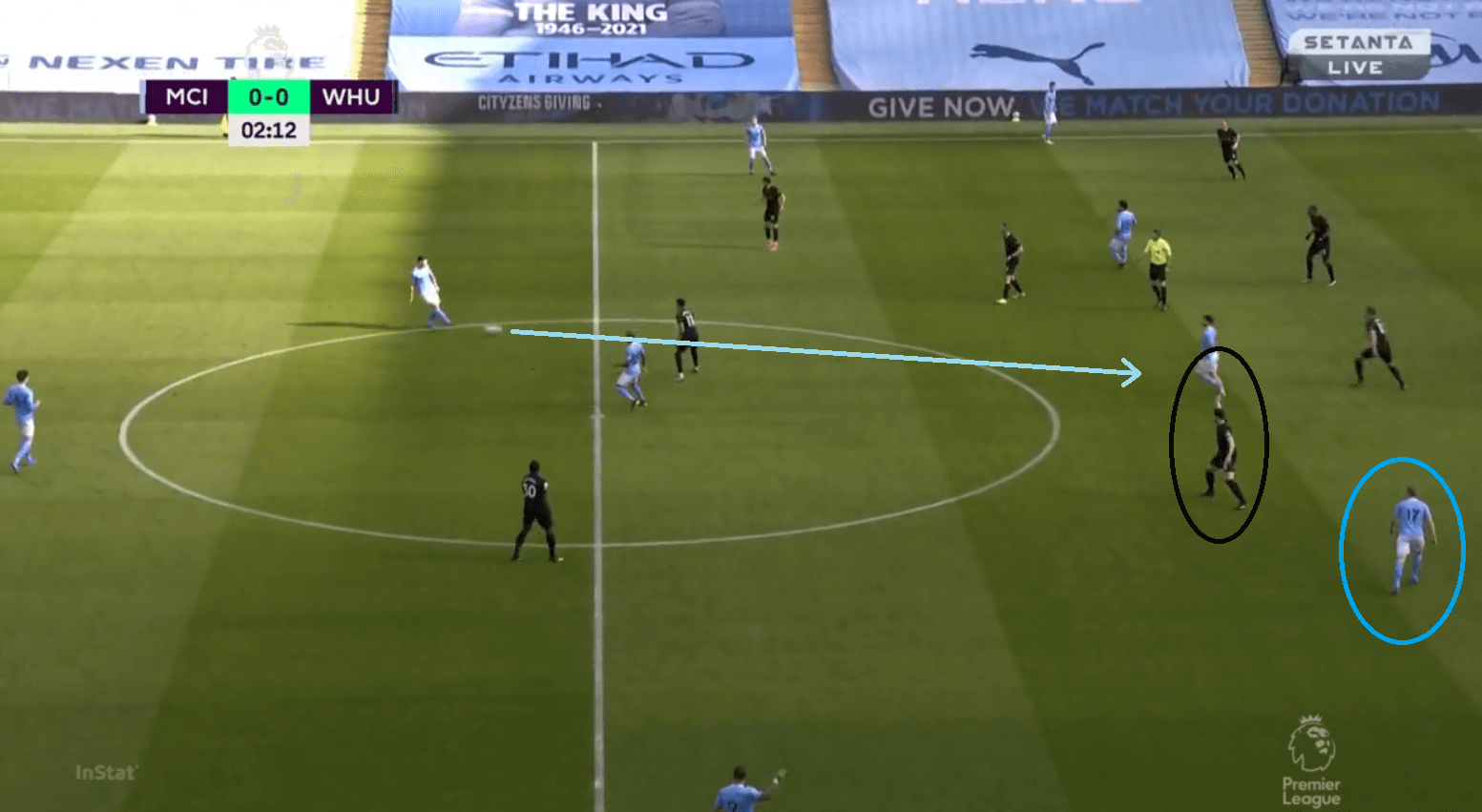 In the above example, Aguero drops deep to receive a pass from Dias. This forces Dawson to follow him and leave a gap in the defence. Both Diop and Cresswell adjust their position very well to close the impending gap left by Dawson. Also, De Bruyne (blue circle), who was in Rice’s, looked to attack that space, but we can see Rice immediately pointing to Cresswell to note De Bruyne’s movement and passes onto him while Cresswell also moves centre to close the gap.

Higher up the pitch when City built from the back, West Ham went with a 4-2-3-1 structure with the wing-back Johnson joining the front line. Johnson would press Walker and Fornals would press Zinchenko (Zinchenko inverting made it easier for Fornals to press him as he stayed central). Johnson did a good job in adjusting his role immediately once City progressed the ball to the final third as West Ham shifted to a 5-4-1 / 5-2-3 with Johnson joining the back 5. 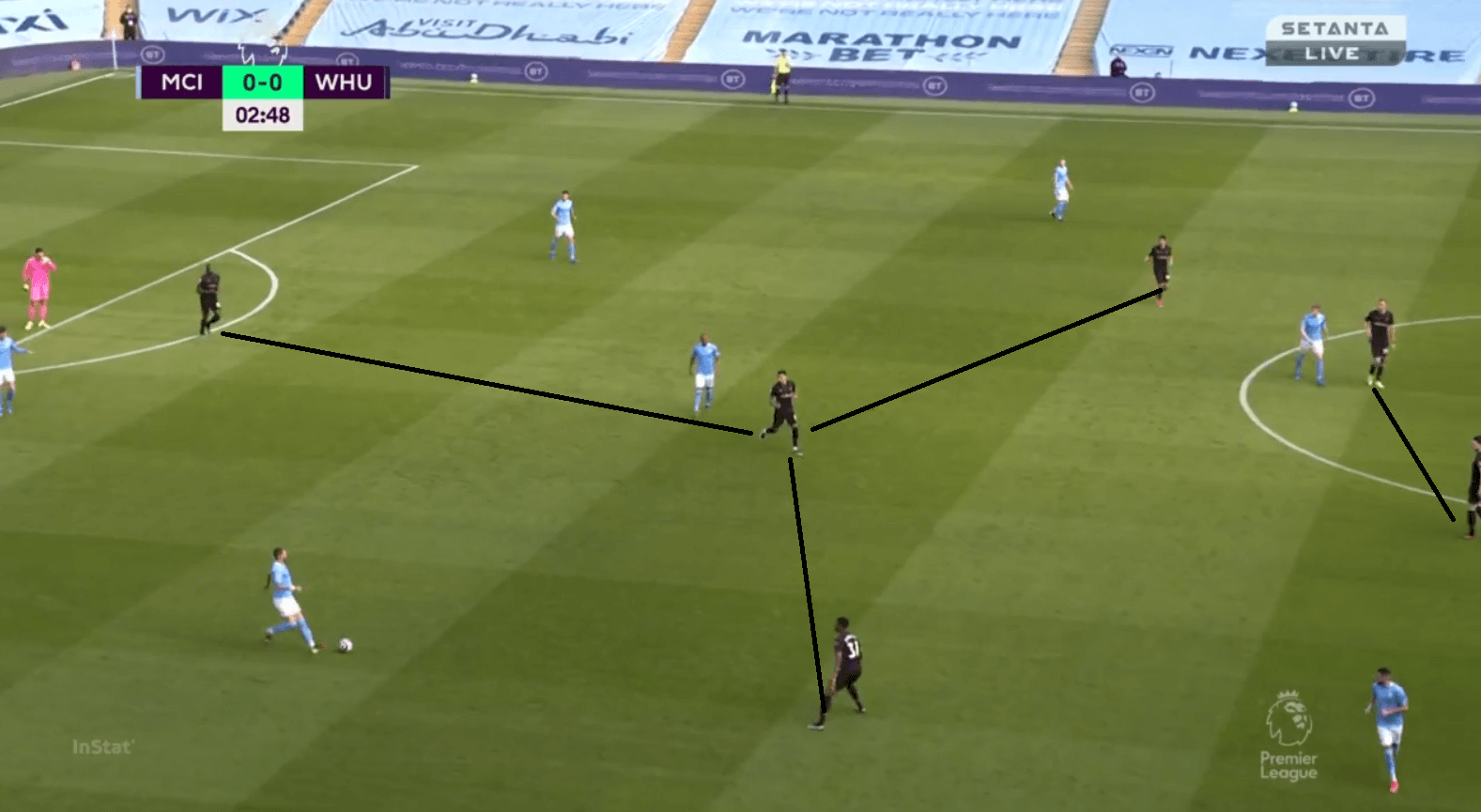 As the game progressed, City found access to the half-space more often. Fernandinho would drop into the defence and Zinchenko would take his position inverting into the midfield. This allowed Walker to now take the half-space position and with Antonio staying up in an asymmetric setup with sub-optimal marking position and Lingard marking Zinchenko, Walker had space to run into. 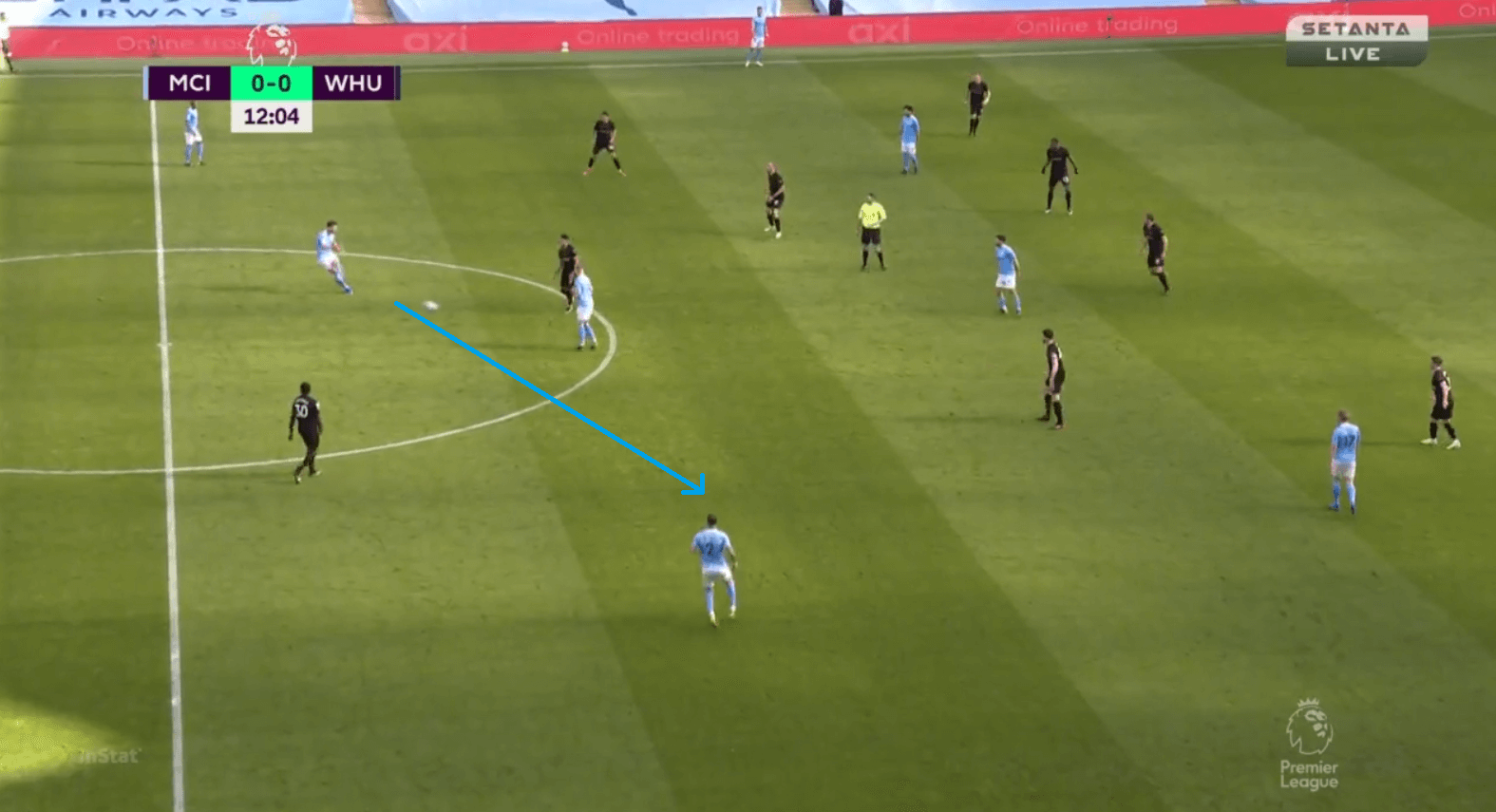 Another way City could have exploited and looked half-threatening was in situations where Aguero dropped deep. In the example below, he drops deep and attracts the nearby West Ham players. This opens space and passing lanes for Gundogan beside him and also De Bruyne is in between the line. 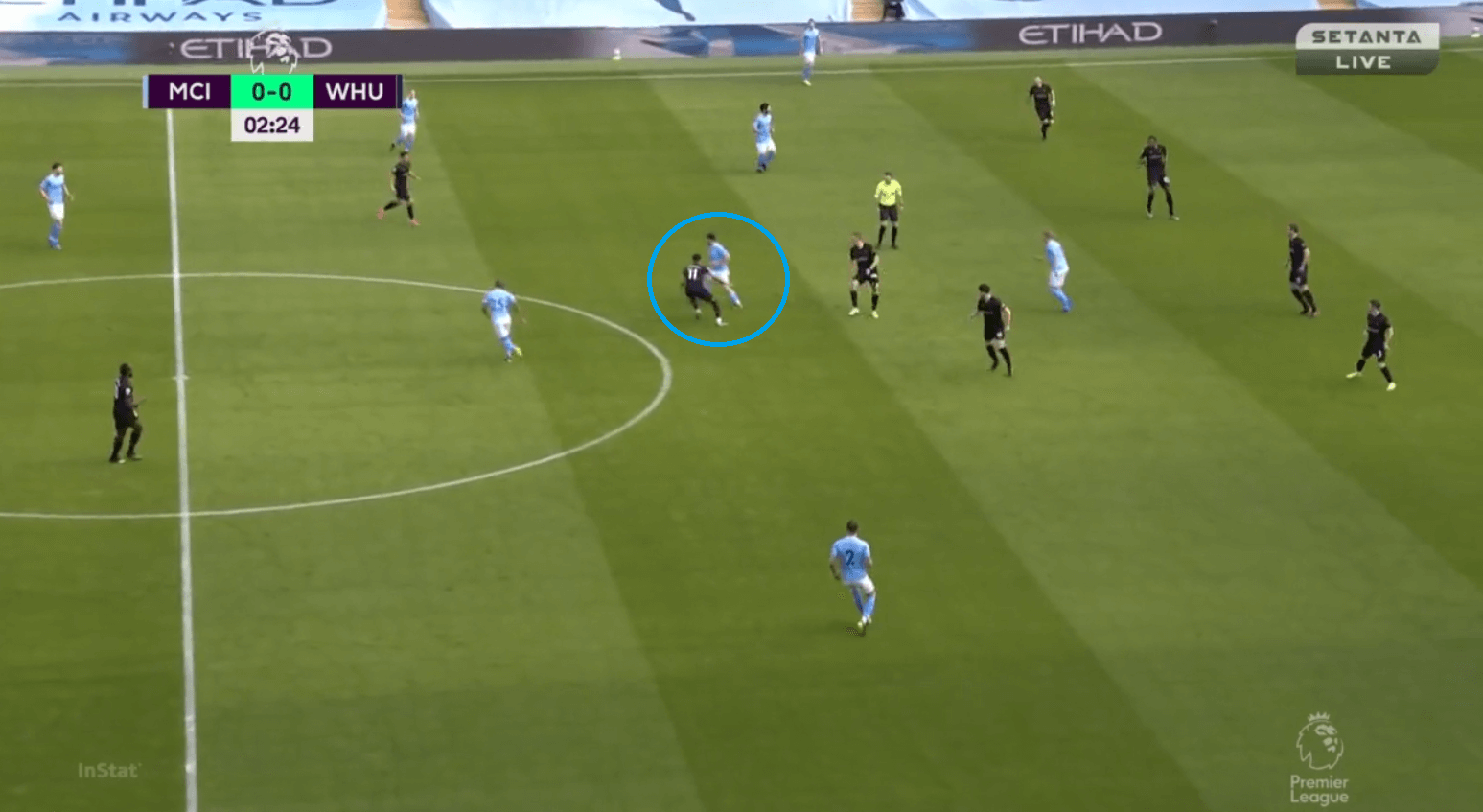 West Ham did tremendous defensive work throughout the match, thus conceding an xG of just 0.82 in this game, which among the lowest City have recorded in this season especially in their 20 game-winning run.

As mentioned before West Ham were both brave in and out of possession. With the ball, they were much more smart and ambitious than their opponents on the pitch. They looked to invite City to press high. We have seen numerous times this season that City defenders don’t entirely push up with their midfield and forward lines as they look to regroup and delay things as possible to bring up numbers. These tactics were visible in their match against Liverpool and Spurs too. West Ham identified this and looked to win second balls in the space in between the defensive and midfield lines. 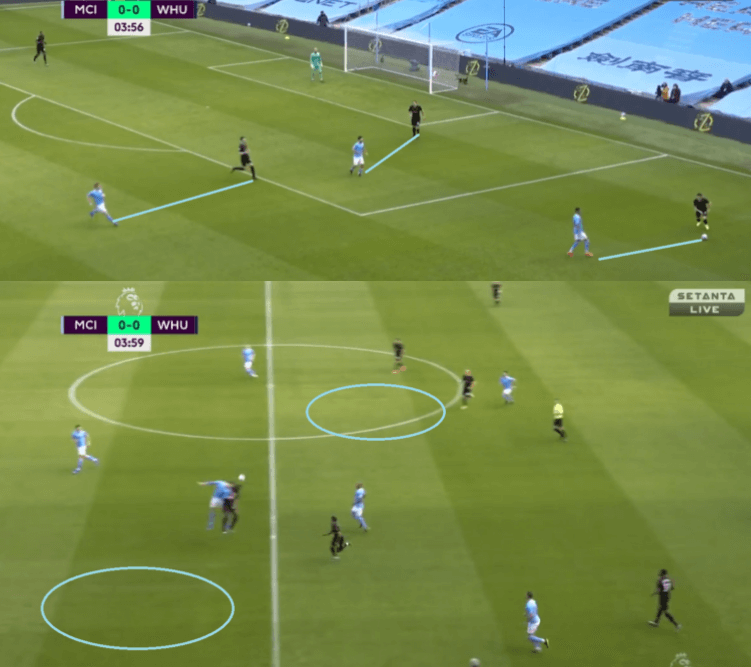 In the above graphic, we can see West Ham inviting City higher up the pitch to press. Cresswell immediately looks to ignore the second phase and directs a ball to Antonio. Look at how Dias and Stones are positioned very deep as they didn’t want to press high. But with the midfield and forward gone high, it created spaces in front of the City defence. Antonio wins his duel against Stones and the second ball lands onto two West Ham players centrally and they can attack the final third.

They were quite dangerous in attacking transitions throughout the game as they looked to hit City in such situations. Initially, it would start with a pass to Antonio and he would hold the ball and his marker really well. By this time, West Ham would have runners starting to make their way into the City half. His bounce pass would be then played by one of the midfielders to any of the runners in the other flank. 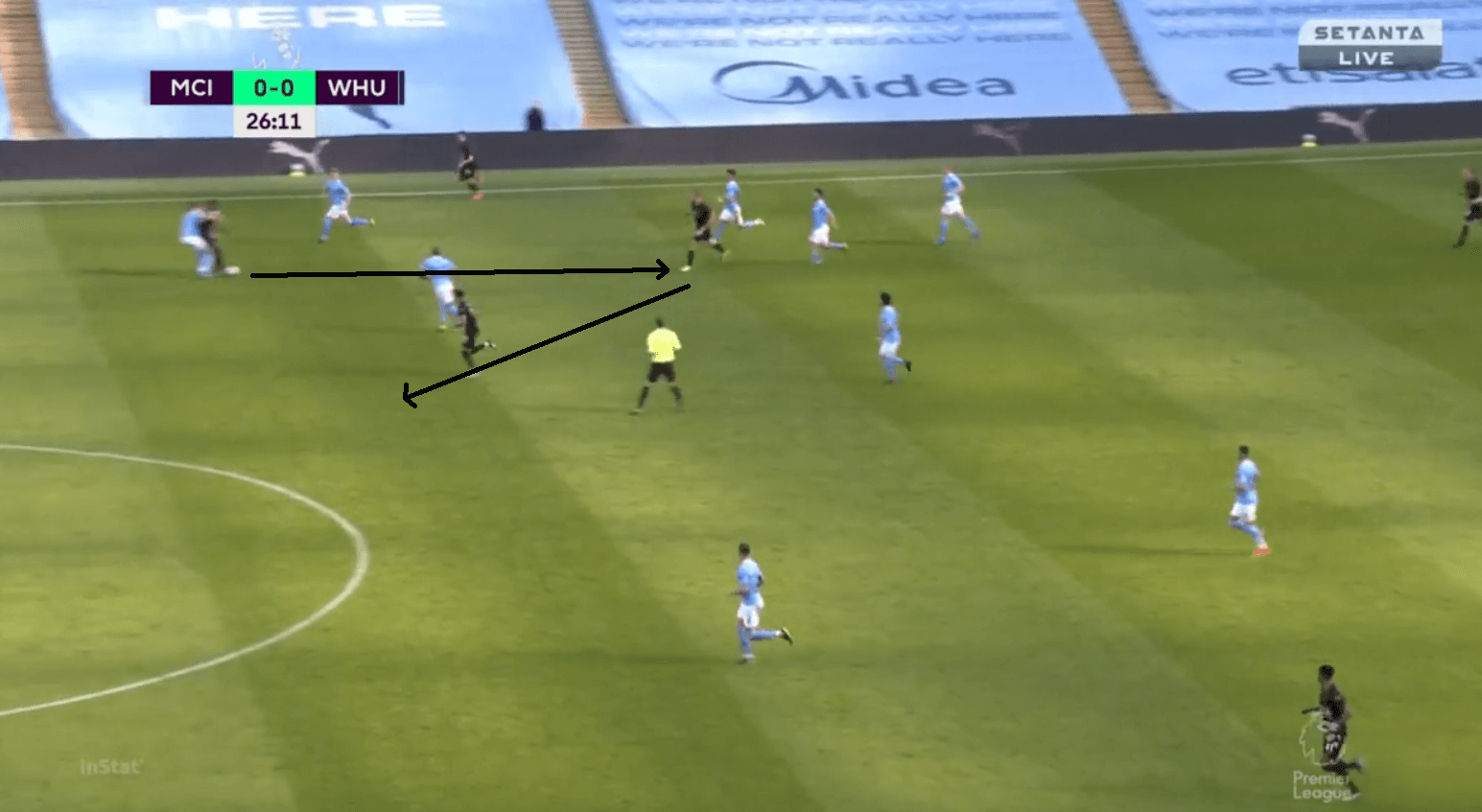 Johnson and Coufal would provide the width in these situations on either flank. Occasionally, Cresswell would overlap from his centre-back position when Johnson moves inward. West Ham were also good in switching to the opposite flank immediately. This unsettled the City defence as they struggled to shift immediately to the opposite flank. Most of their dangerous moves came on the back of this pattern. The sequence below lead to a crucial chance for West Ham to equalize. 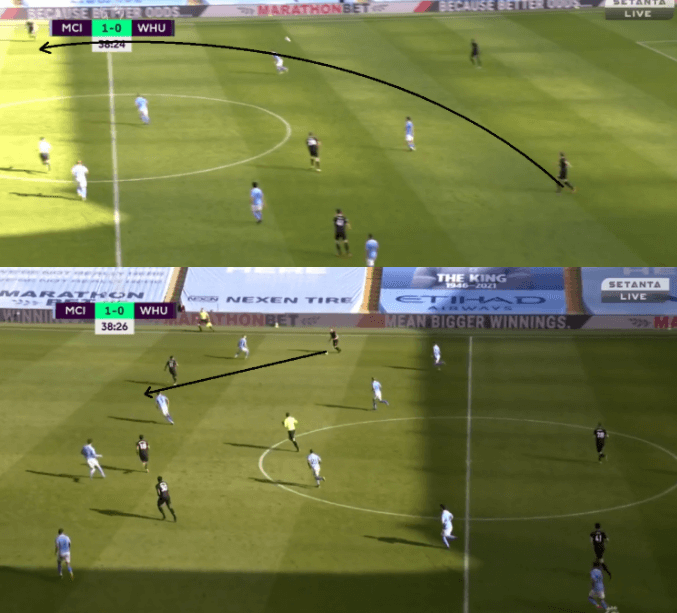 Their goal initially saw West Ham win the ball in City’s right flank. With City committing so many players on the near flank during a throw-in situation it left them exposed on the opposite side. Lingard immediately plays a ball to Coufal, out on the flank and Torres who was very high was left behind. Coufal then played a low cross for Lingard to shoot which was deflected into the net by Antonio at the far post. 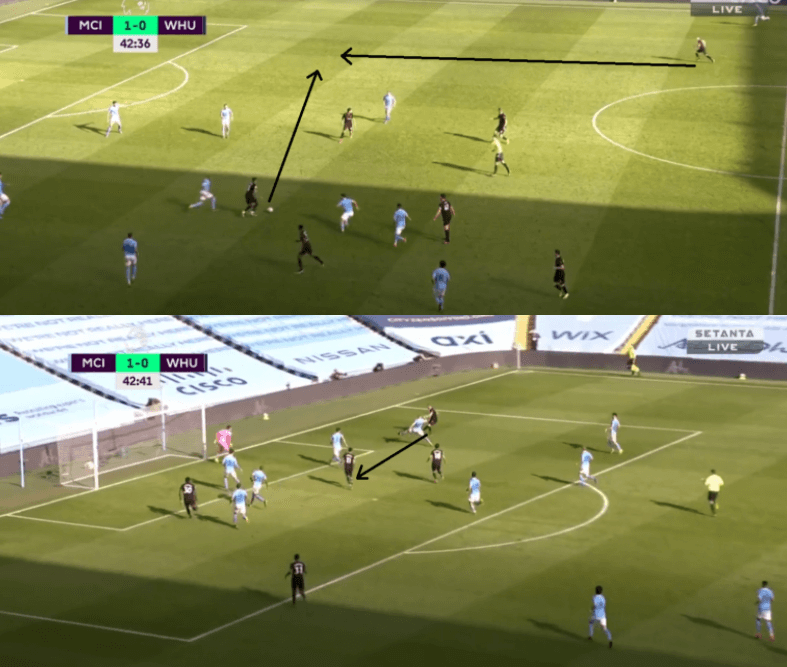 Despite creating chances worth 2.09 xG, West Ham were outdone by some average finishing and City’s individual quality. Despite the loss, they were probably the better team with the better plan on the day and Moyes would be extremely disappointed to not have collected points from the match.

City, on the other hand, continues to keep racking up wins and edge closer to the title. With fixtures pilling up across multiple competitions, Pep would be extremely happy about the result if not the performance.