In last week’s data analysis, we looked at interesting talented midfielders in the Primavera, and this week we will take a look at centre-backs from the same league. It is interesting to note that the three Italian centre-backs with the highest current market value based on Transfermarkt came through the Primavera before playing in Serie A. Alessandro Bastoni developed at Atalanta before making €31 million move to current Serie A leaders Inter Milan, having played just 153 minutes in Serie A before that transfer.  Current Milan captain Alessio Romagnoli played for Roma’s Primavera squad, while a new Roma signing this season, Gianluca Mancini, played for Fiorentina at the Primavera level.

This analysis will provide us with the essential pieces of information to find out which players are ready for the next step and possibly could play in Serie A next season. It contains Wyscout statistics for players who have played more than 300 minutes in the league this season. After looking at graphs and player abilities for the centre-back position we have chosen four players, who are marked in red on our charts. It is important to note that these players were chosen based on data and this only means that they have been among the best in terms of statistical output – further scouting will be needed to assess their abilities in game situations.

In this section, we will evaluate the defensive qualities of the highlighted centre-backs and how they compared to the rest of the league. In the first graph, we will look at successful defensive actions per 90 and PAdj interceptions. This data will give us information on how often centre-backs are involved in defensive actions, as well as their reading of the game. 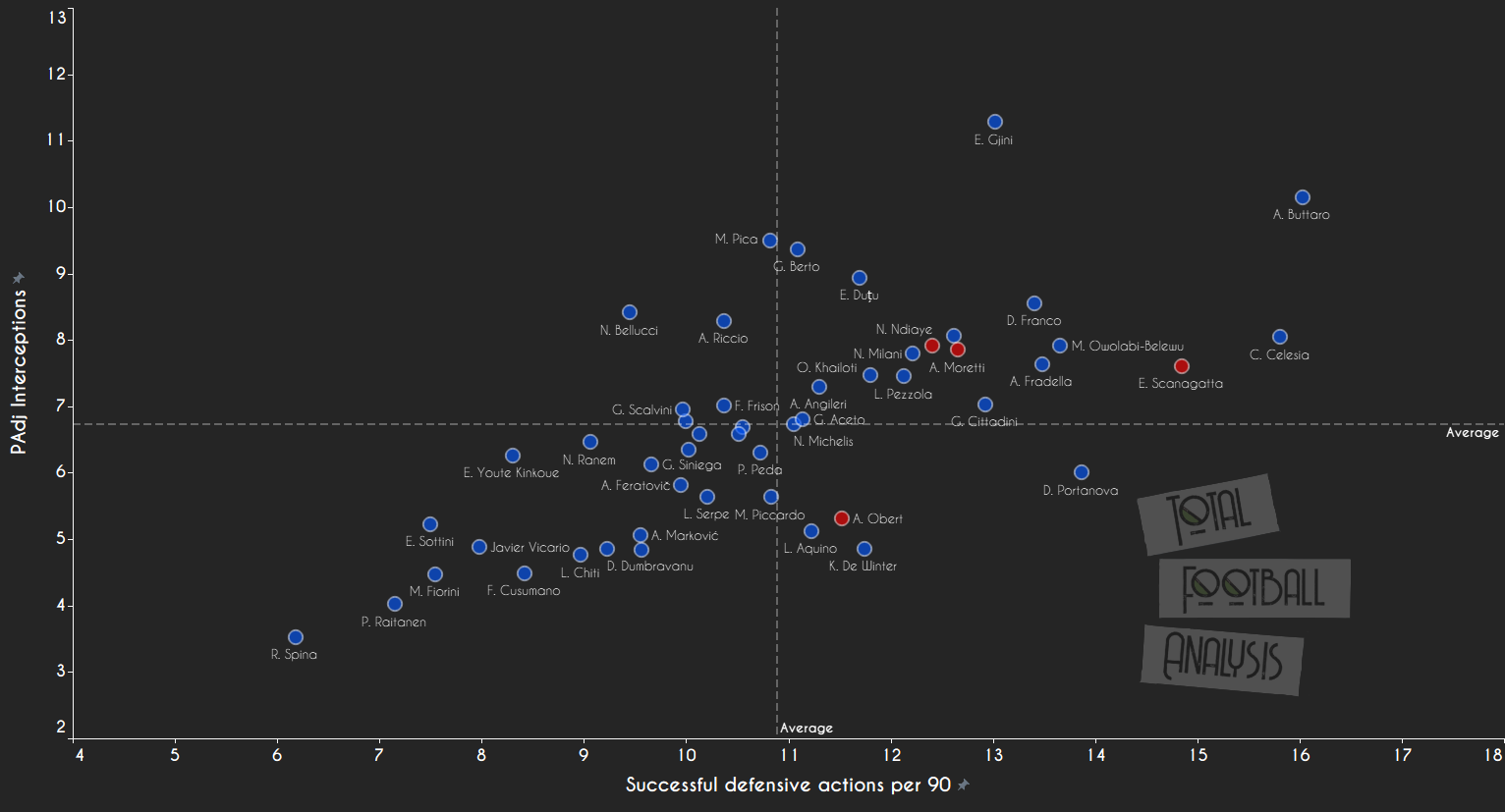 Three out of the four players we highlighted are above average in both metrics. The most impressive player from highlighted players on this graph is Edoardo Scanagatta, 18-year-old Atalanta centre-back. Scanagatta is averaging 14.85 successful defensive actions per 90 and 7.6 PAdj interceptions. Scanagatta is 3rd best compared to the other league centre-backs in successful defensive actions which shows that he is often involved in his team’s successful reactions in defence.

The next graph will show us the success rate in both defensive and aerial duels. This will show us if they are physically ready to compete on a senior level. 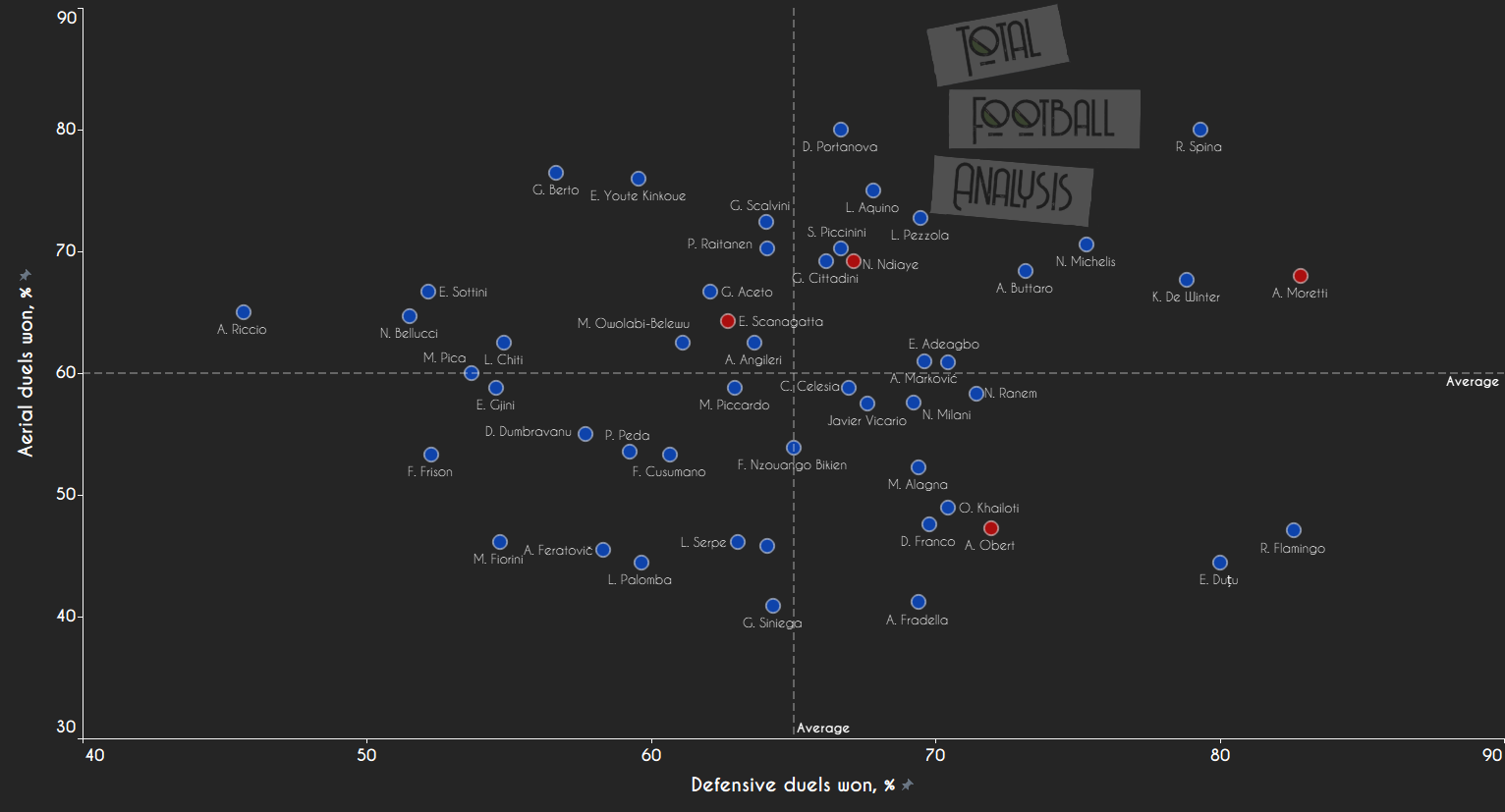 This section shows that Moretti and Ndiaye are above average in evaluated defensive metrics meaning their defensive ability is the finest in the league based on data. However to get a better overview of their capabilities we have to take a look into their passing ability and progressive actions. We know that modern centre-backs are involved in build-up and most teams now demand from their centre-back to be able to make quality passes towards the opponents goal. The next section will show us how Primavera defenders look in passing metrics

To evaluate those passing and progression we will first take a look into how much centre-backs are involved in passing and how accurate they are with their passes. We will use passes per 90 and passing accuracy % to evaluate and the size of the markers represents the number of attempted long passes per 90. 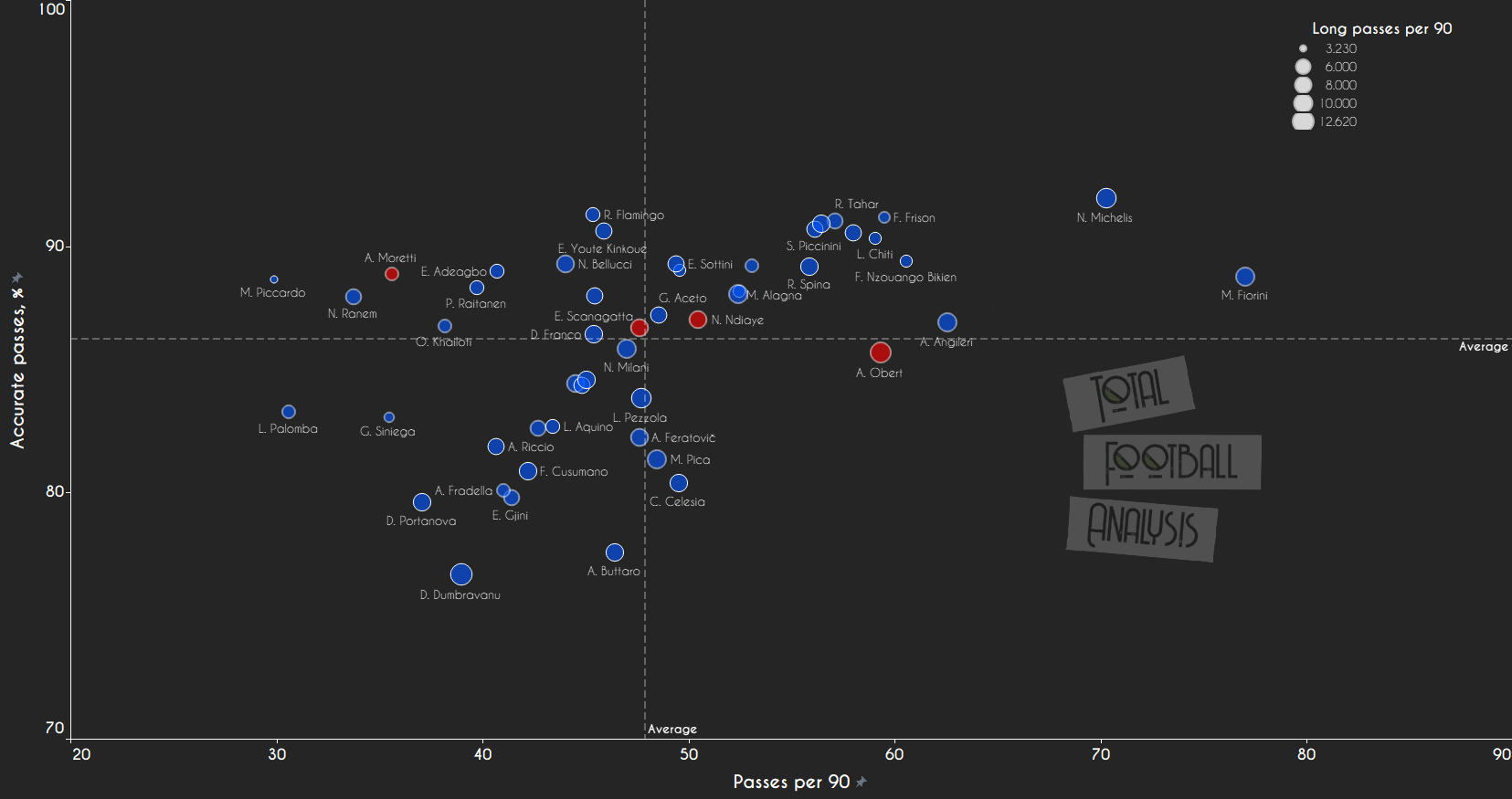 What is important next is to find out players passing tendency. To determine that we made two calculations: forward passes per 100 passes and lateral or backwards passes per 100 passes. This will give us a better idea of which players are taking more risks and tend towards the advanced solutions and which players tend to play simple low-risk passes. 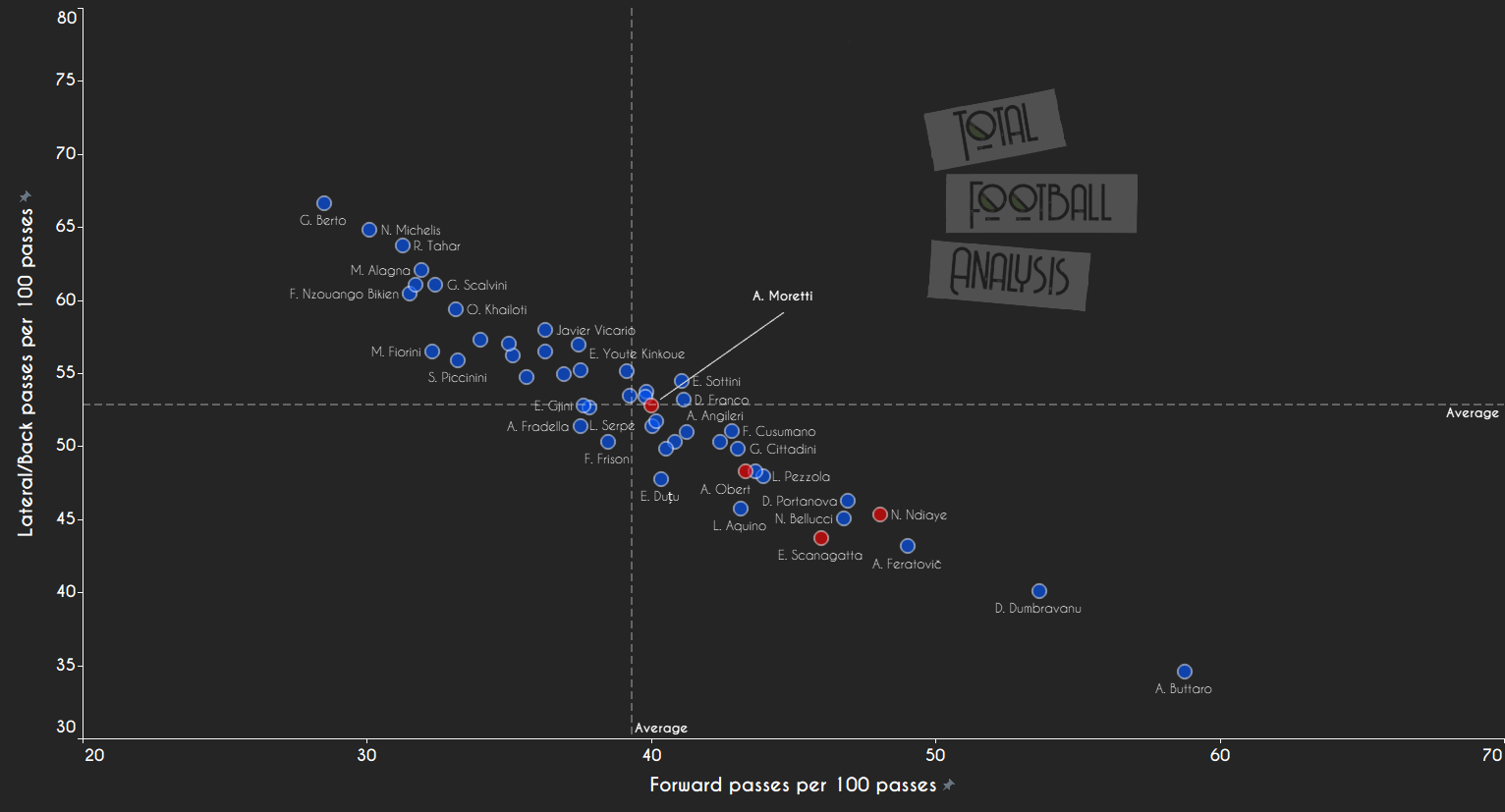 As we can see all the highlighted players are above average in forward passes per 100 passes which shows they are tending to play forward often. However, Moretti is a less advanced passer just like we saw on the last graph and he tends to play more laterally or backwards than forward. The other three players show a tendency to play forward and make an impact in the build-up. It is interesting to see their output in the next graph where we will take a look into the progression. 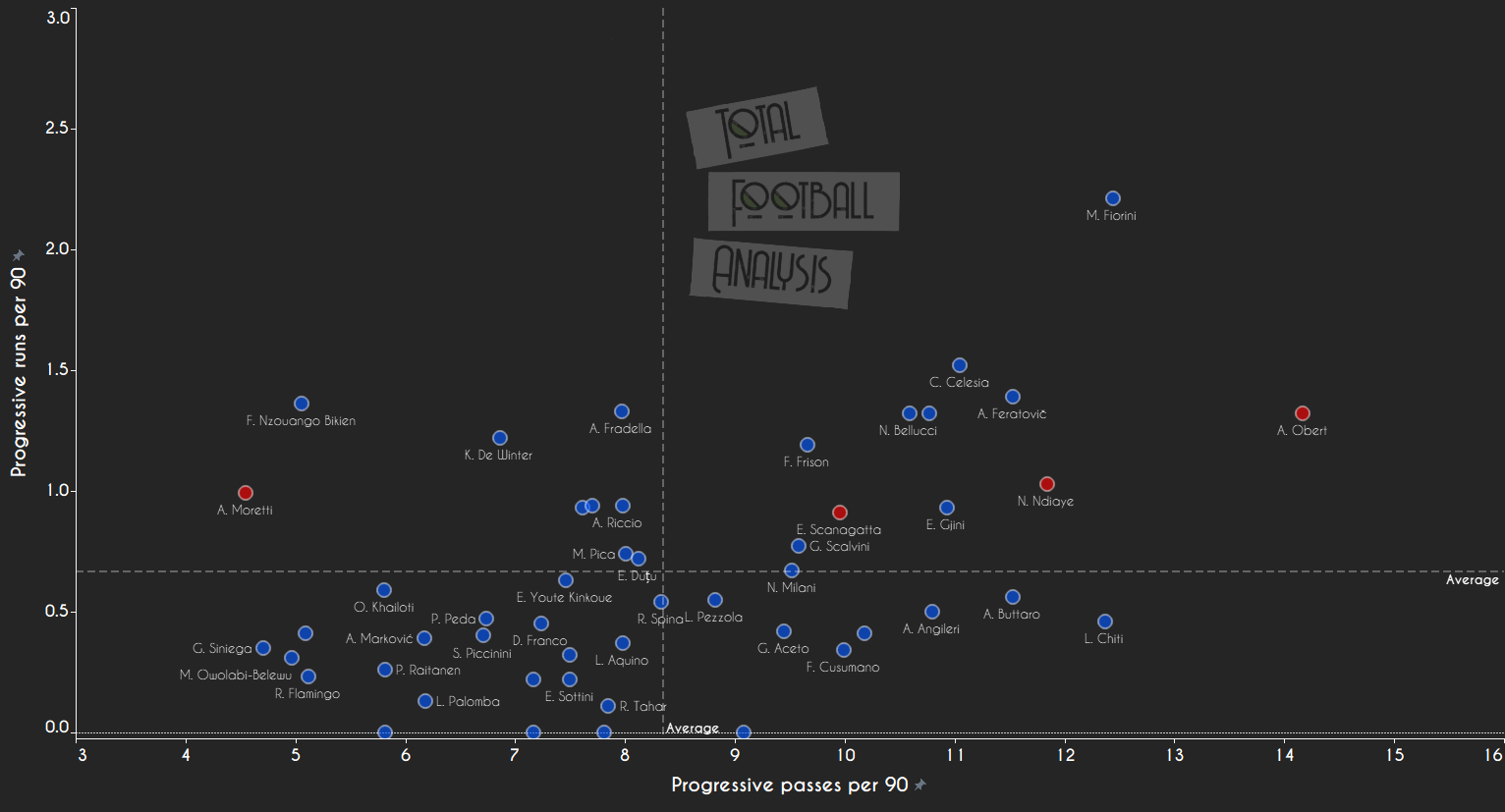 Maissa Ndiaye – Senegalese born in 2002 in Dakar. Joined Roma this season from Afro Napoli. He is listed 184cm and he is right-footed. Primavera data analysis shows why talented centre-back is already labelled as next Koulibaly Ndiaye is already compared to Koulibaly who is one of the best centre-backs in Serie A. Going through this analysis we can conclude that based on data Ndiaye is the most complete centre-back from those we highlighted, meaning probably that he is the best centre-back in the Primavera this season.

Andrea Moretti – Italian centre-back born in 2002. He is Inter Milan academy product and he spent one season on loan at Novara youth team. He is listed 183cm and he is right-footed. Based on the data we evaluated he showed impressive defensive ability which shows that defensively he could be ready for senior football. However, he showed that he doesn’t make enough impact in the build-up and he has a lot of room to improve in that department especially if he wants to play at Inter where centre-backs are highly involved in the build-up.

Edoardo Scanagatta – Atalanta centre-back born in 2002. He is an academy product and played for Italian U16 and U17 team. Scanagatta is listed 184cm and he is right-footed. Going through the graphs we noticed him being very good in most of the metrics and probably the only real weakness he showed was in defensive duels compared to the other centre-backs in the league. However, it is not too bad because he is winning 62.7% of defensive duels which is a high winning percentage and he still has room to improve and work on his timing and physical attributes.

Adam Obert – Slovakian centre-back born in 2002 in Bratislava. He is currently playing for Sampdoria and he arrived in 2018, one year after his compatriot Skriniar was sold from Sampdoria to Inter. Because Skriniar proved as a success it led to Sampdoria signing another Slovakian centre-back in the hope that he can follow his steps. Obert is listed 186cm and he is left-footed. His passing ability can make a difference in the build-up, but he needs to improve in the aerial duels which is his weakness. It shouldn’t make him a lot of trouble improving in the air given his height, but he should work on it instantly because in senior football he would be a liability in the air against experienced forwards.

All the players mentioned above show quality through data and they are some of the best performers in Primavera this season. Based on Bastoni example it shouldn’t surprise us if Obert or Scanagatta are already tracked by top clubs. Ndiaye and Moretti are surely players who could earn some minutes in the next season of Serie A. It is no coincidence that each season Serie A is rewarded with few talented players who developed at Primavera to be ready for senior football.