Advantage City: but here’s why Dortmund should remain optimistic for round two

On Tuesday evening, we viewed an eventful victory for Pep Guardiola’s Man City over Borussia Dortmund in the UEFA Champions League. This tactical analysis will take a detailed view of both side’s tactics, and how City managed to win ‘ugly’. We will have a look at three key talking points, do an analysis of some intriguing tactical concepts from both sides, and truly understand why City deserved the victory, just. 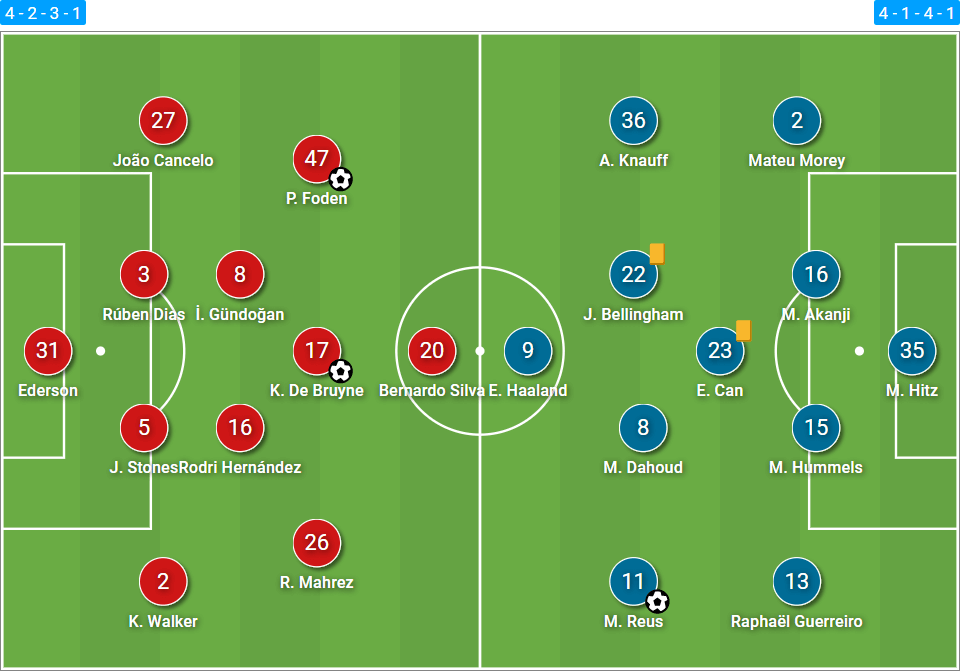 It seems in the bigger games, or at least in recent UCL fixtures, City have utilised the 4-2-3-1 for a bit more rigidity from a perspective of protecting the backline. This also facilitates former Chelsea man De Bruyne to line up as a #10, rather than part of a midfield three, which arguably suits him better, moving him further towards the opposition’s goal. Of course, however, without a recognised striker, Foden, Silva, and De Bruyne all acted as false 9’s, rotating positions as the game went on to confuse the Dortmund backline.

Edin Terzić had a few selection issues for Dortmund on the evening which did not help him. Jadon Sancho is of course still injured, as well as young starlet Youssoufa Moukoko, who had registered three goals in just over 400 minutes of senior football so far this season (at 16 years old…). The big surprise was from the coach was starting youngster Ansgar Knauff, over the likes of Thorgan Hazard, Gio Reyna, and Reinier who could all play in that position. It was a gamble, but did it pay off?

Tight contest in the first-half

In truth, the first half introduced a few intriguing tactical tweaks from both managers, but it was a bit of a stalemate for a large period of the first half. City did take the advantage in the 19th minute (more on that later), but each side had just three shots each in the first 45 minutes of the match. Dortmund packed the middle of the pitch, both in terms of midfield composition and in their pressing tactics.

When the ball went out wide to Cancelo or Walker, the pressing from Dortmund lessened, and the focus returned to maintaining the shape of their formation. Conversely, when the ball was played centrally, and especially when City played the ball backwards, Haaland, Reus, and Knauff switched on their aggressive pressing mode, and it certainly worked on occasions. In these moments, midfielders like Bellingham would also get involved as well.

Generally, this season, we have seen City engage in less pressing than we have become accustomed to under Guardiola. “The only difference is that we are running less” said Guardiola in January of this year when describing the difference between this year’s side versus last season in the Premier League. However, in this game, especially in the first period of play, City’s attackers were pretty tireless in their man-marking and pressing.

Silva was hooked off at the hour mark, but he gave his absolute all from a defensive point of view. He started the game as a false 9, but he switched with De Bruyne as and when Dortmund began to understand how to evade his energetic pressing. Moving deeper, he worked well with Gündoğan in the midfield to dispossess their opponents, which earned them a few chances of their own and resulted in the first goal. 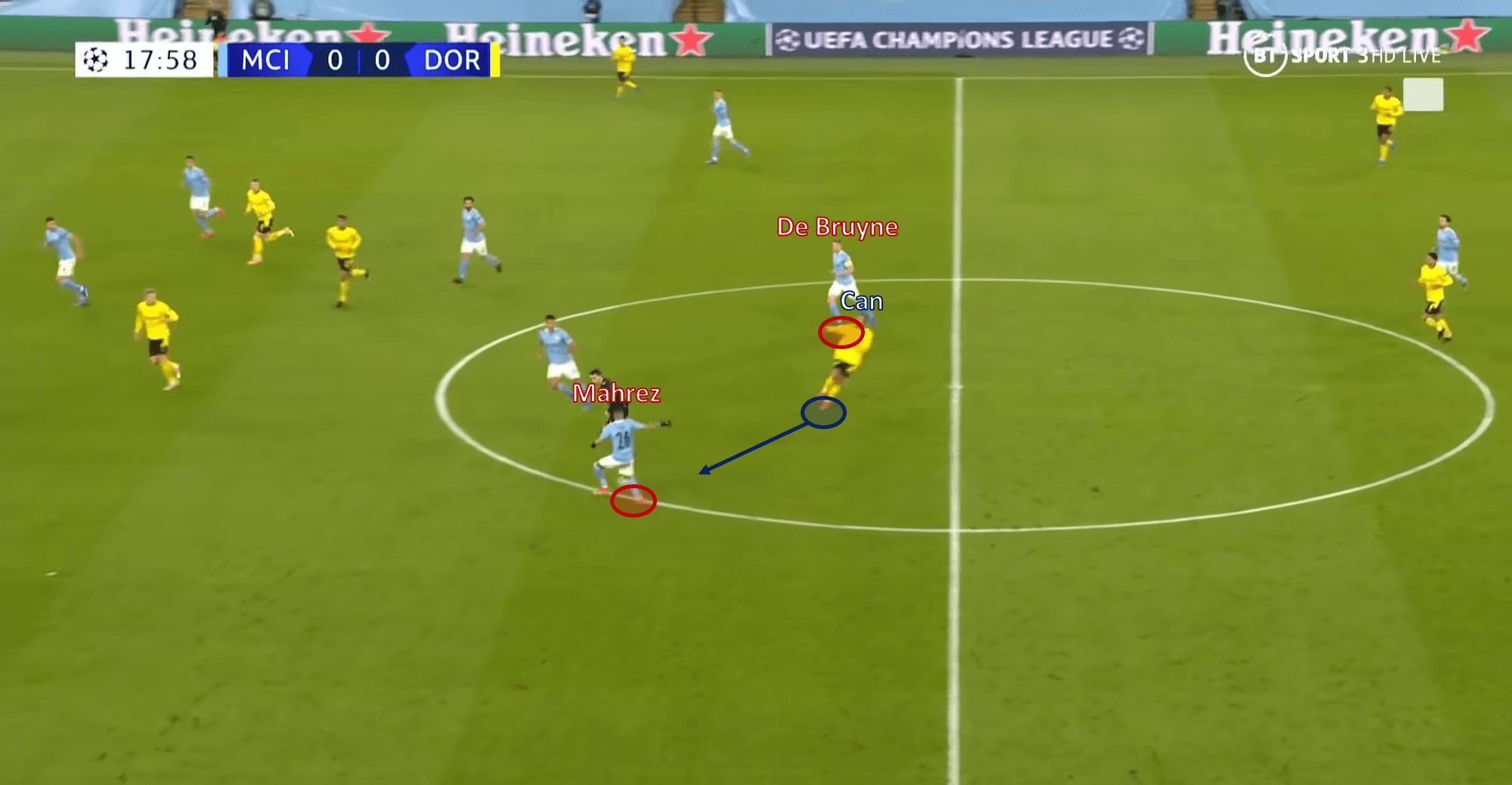 Can sloppily misplaces his pass into the path of Mahrez, who immediately plays the ball into De Bruyne’s feet. 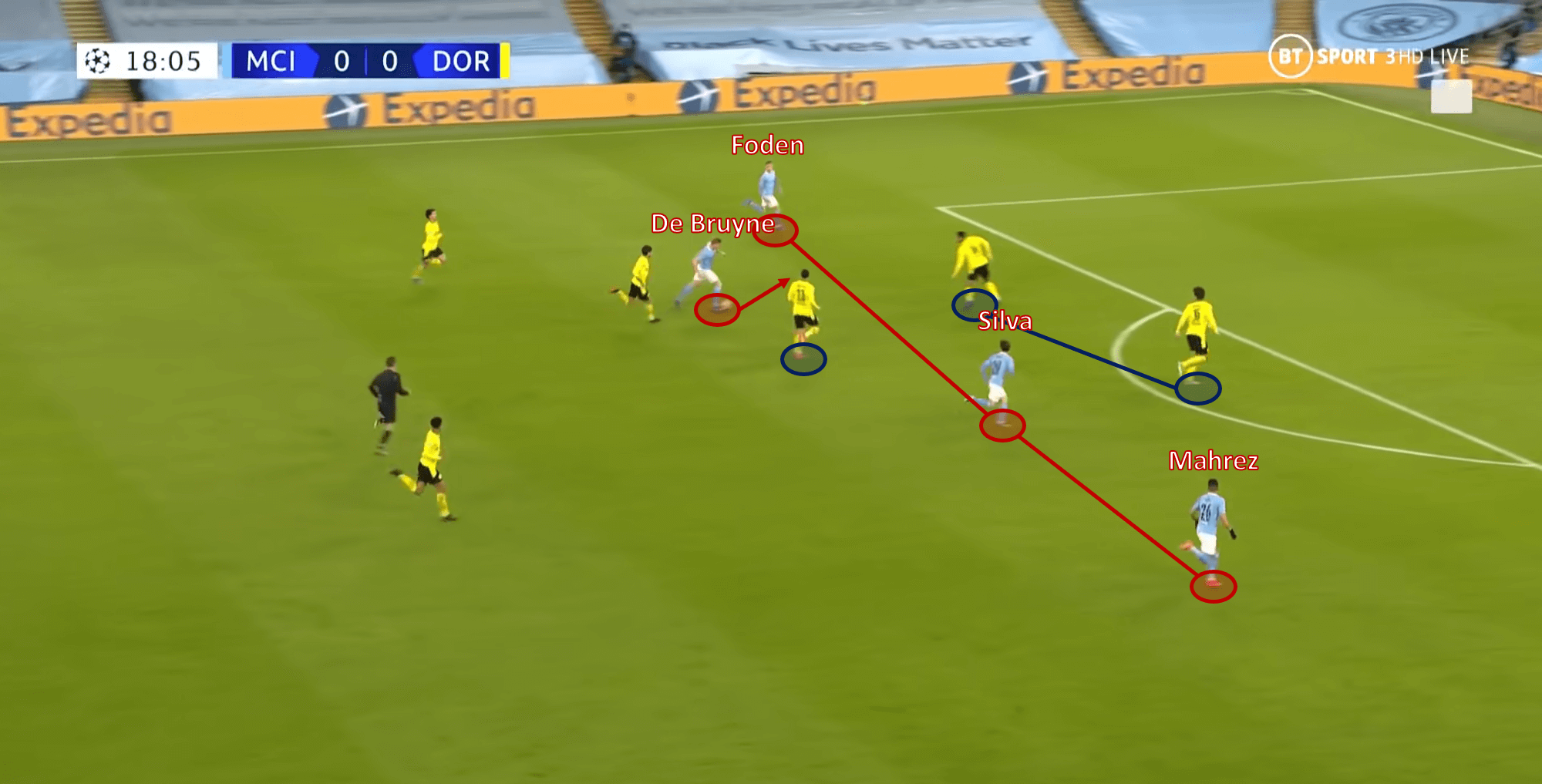 De Bruyne steamrolls past Bellingham in midfield, and is essentially a 3v2 scenario, he lays off the ball towards Foden, with Mahrez in space at the opposite end. 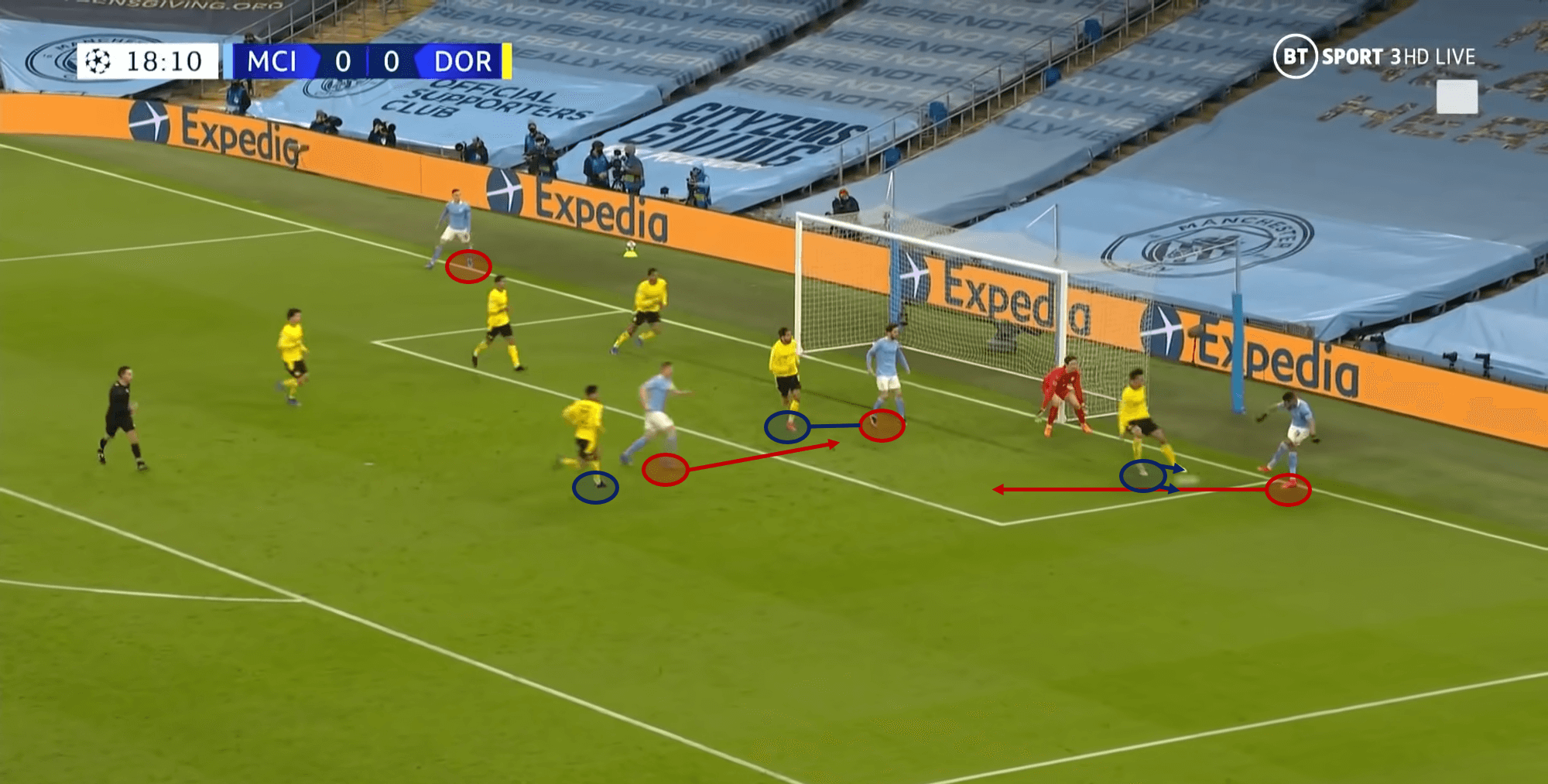 After a switch of play from Foden, Mahrez collects the ball with an exquisite first-touch, cuts back, and plays the ball into the path of a free De Bruyne, thanks to Silva’s excellent positional play inside the six-yard-box.

Another point to note from the first half was the performance of Bellingham in the centre of the park. His positioning was top-notch, consistently making himself available for a pass, both in the final third and in the build-up phases of play, where he would position himself in between the lines. And of course, in his pressing, where he moved beyond the midfield to apply pressure and force the mistake. Which he did, and was unrightfully disallowed a clean dispossession of the goalkeeper to score a tap-in. 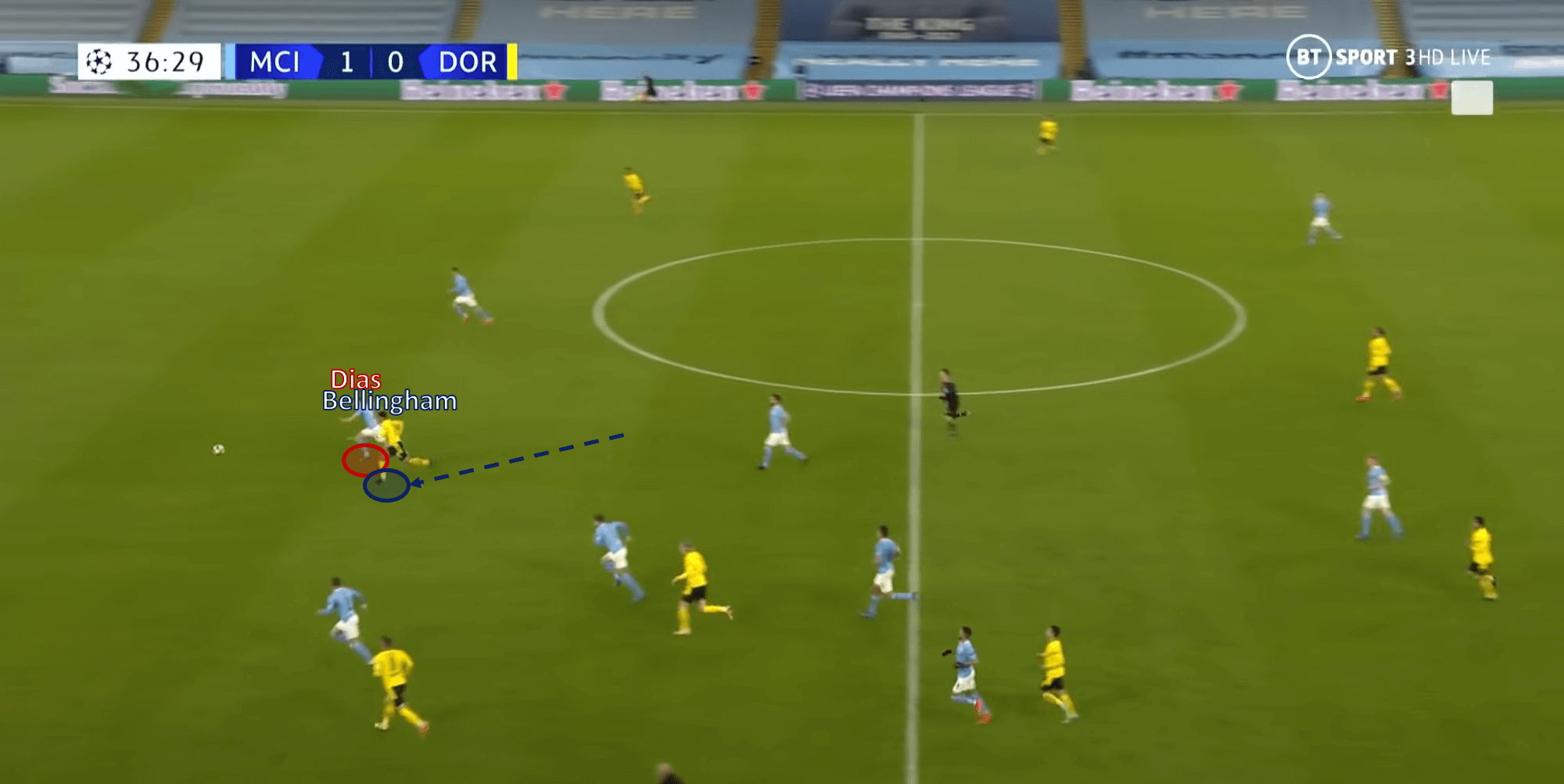 With Haaland dropping deeper, dragging a defender with him, Bellingham makes a run from midfield to latch onto Guerreiro’s through pass. 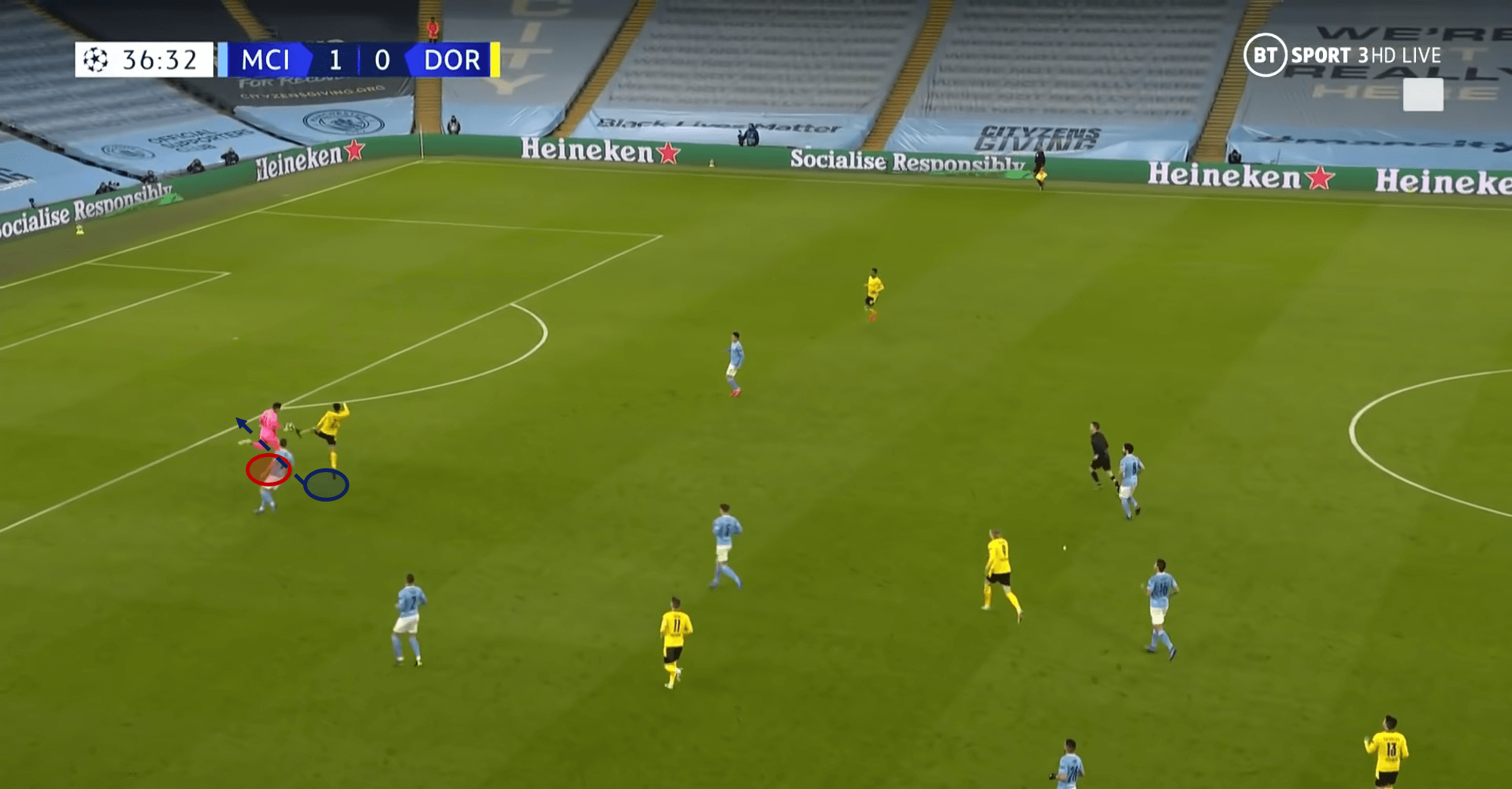 Here, Bellingham wins the ball, without touching Ederson, and runs through on goal, but the whistle is blown before the 17-year-old can even feel the elation of scoring a first UCL goal. Unjust.

A focus of both sides is usually to get to the byline and produce cutbacks into a dangerous area. Achraf Hakimi was emblematic of this last season for Dortmund in their 3-4-3, and Guerreiro similarly this season in their varying systems. Without Sancho on the right-wing in this match, they struggled to really get the ball into advanced wide areas and earned the bulk of their chances through the middle of the pitch.

32% of Dortmund’s attacks came down the centre of the pitch, compared to City’s 19%, and a lot of Dortmund’s greatest chances had come from individual errors by the likes of Rodri, Cancelo, and Dias. In their attacking approach, Dortmund looked like a 3-3-1-3, with a player just behind the forward line to ping passes beyond the defensive line, primarily looking for Haaland’s signature blindsided runs. 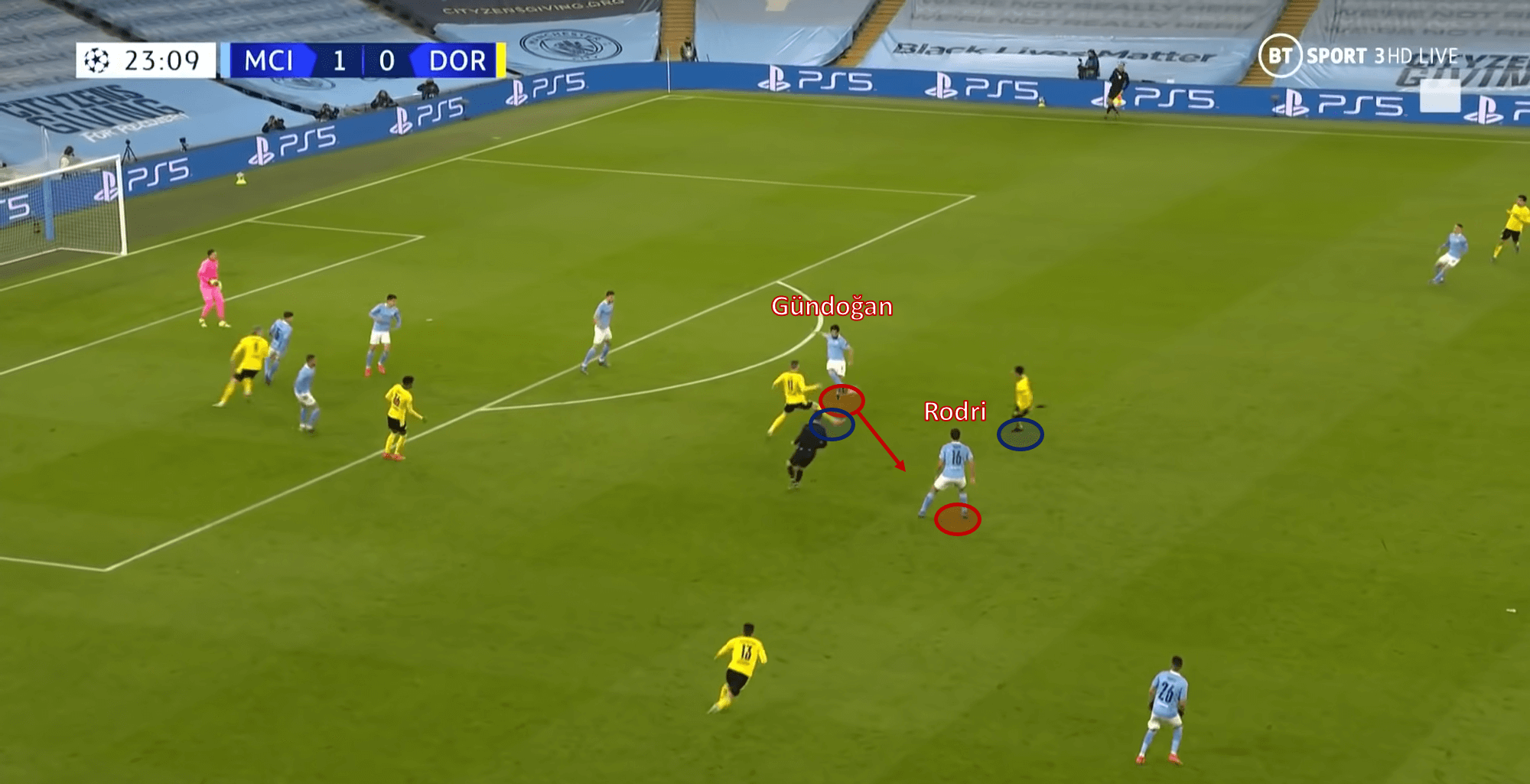 Gündoğan and Rodri are offset from each other, with Rodri positioned slightly higher to act as a platform for ball progression, and Rodri receives the pass from his teammate here. 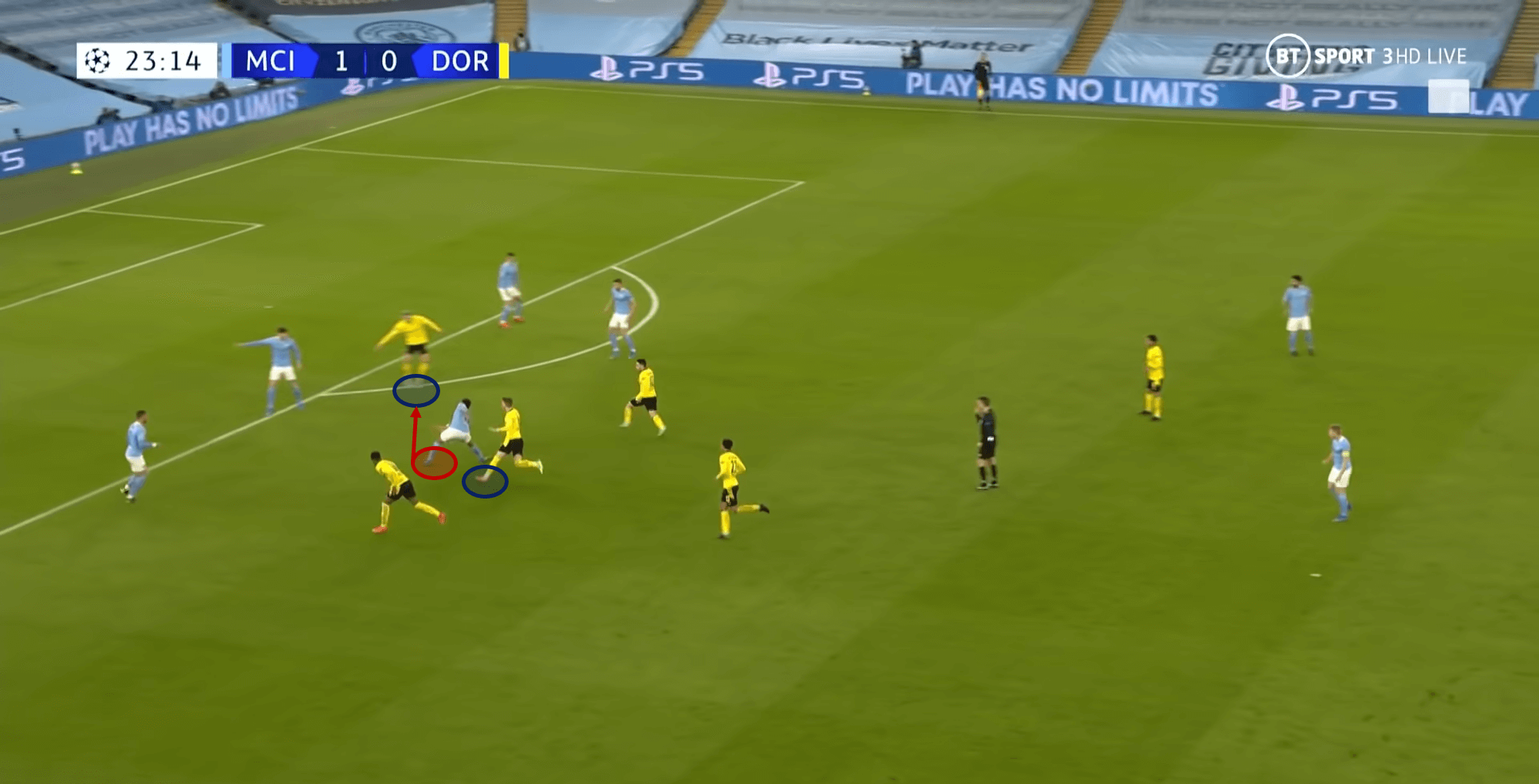 He dribbles backwards into pressure, and passed it into the feet of the dangerous Norwegian.

On the other hand, City managed to carve chances through the centre of the pitch, before shifting it wide and driving crosses towards the far post, rather than the six-yard-box, who would then drag it back to the middle of the penalty area, where someone can take a shot on goal. This is a slight adjustment from their usual attacking tactics, and it worked to a decent effect in this match.

Otherwise, De Bruyne, probably City’s second-best attacker in this game behind Foden, was key in driving at the Dortmund defence and destabilising their structure. Although he does not possess excellent pace, his magnificent technique and power was significantly difficult to defend against, and he routinely got into the half-space where he could play simply driven passes into the area to create chances. 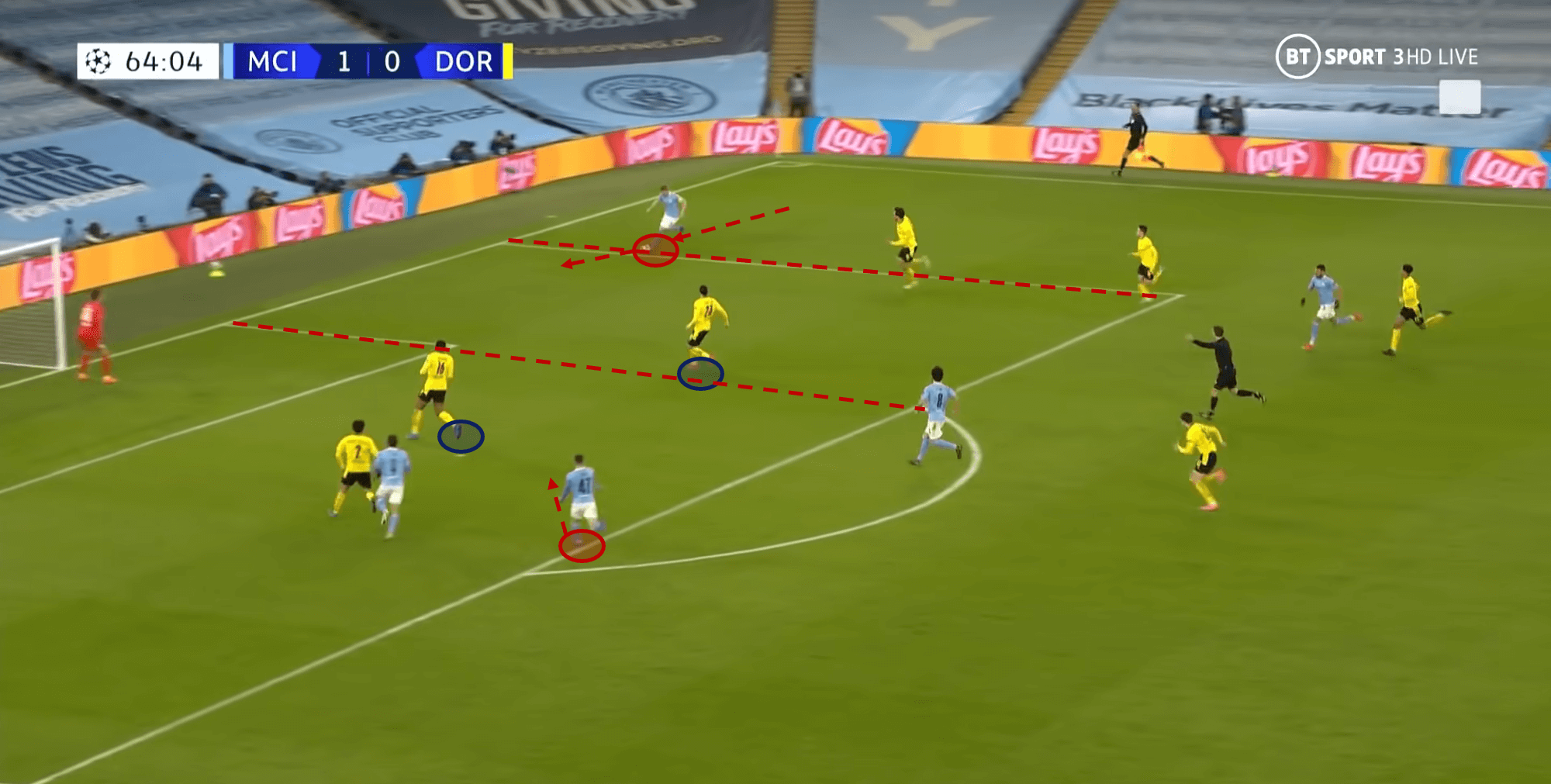 De Bruyne picks up the ball and drives into the penalty area, with Foden looking to move towards the near post, before switching at the last moment. 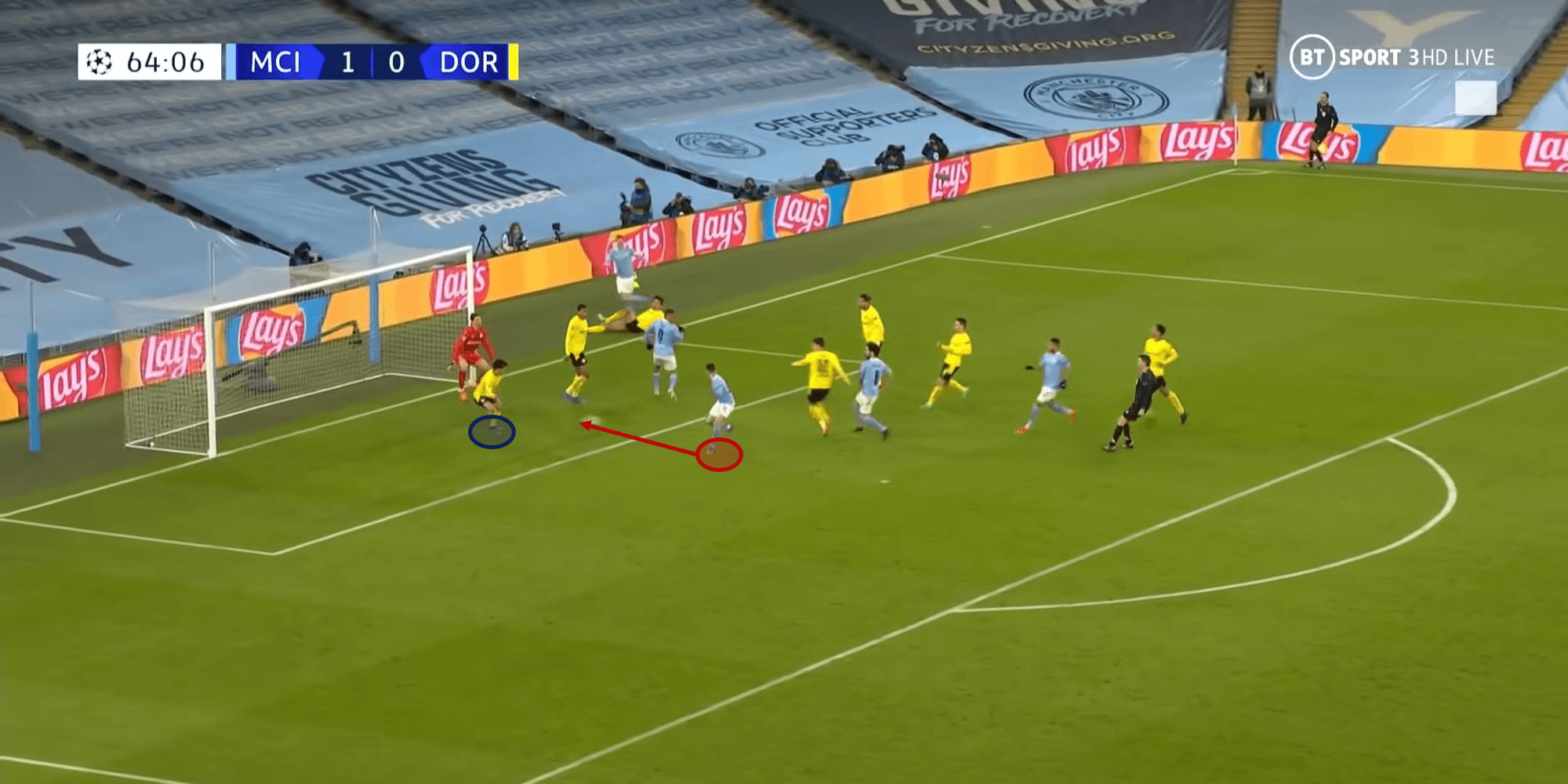 Arguably, Foden should do much better here. He hits the ball right into the Dortmund defender instead.

Foden, however, as mentioned, was City’s best player on the night. 20 years old, he was City’s most ambitious attacker, especially towards the end of the match, where he used his fantastic and nimble dribbling technique, and drove directly into the penalty area. As well as this, he positioned himself excellently off the ball to be on the end of a handful of goalscoring opportunities.

The statistics speak for themselves. Five shots, three dribbles, and three tackles was emblematic of his all-around performance. In tandem with Silva (and then Gabriel Jesus) and De Bruyne, Foden would press aggressively in the middle of the pitch, while he would look to cut off passing lanes, rather than going directly for the man possessing the ball. 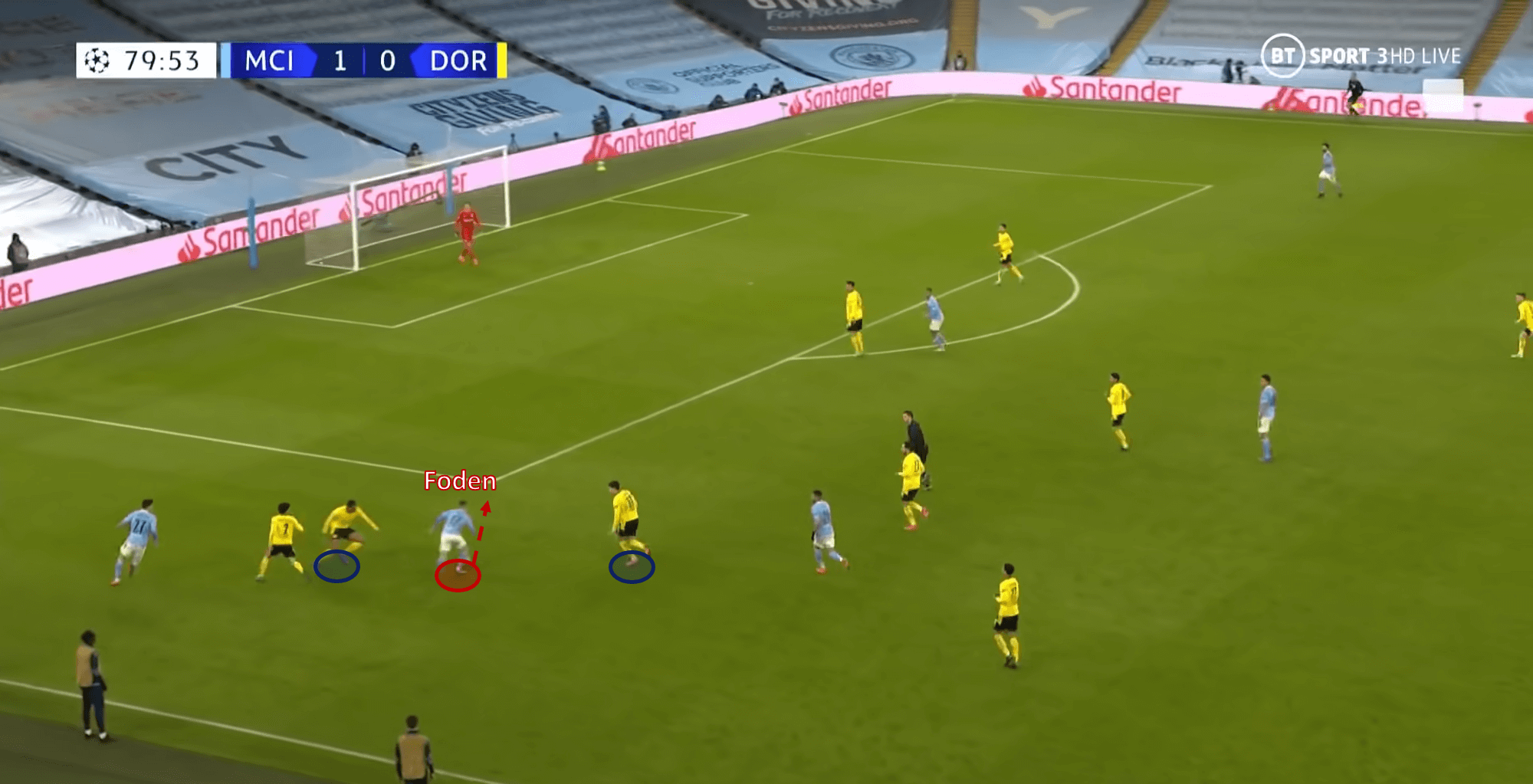 Foden receives the progress pass, jinks his body left to right to create space and drive into the penalty area. 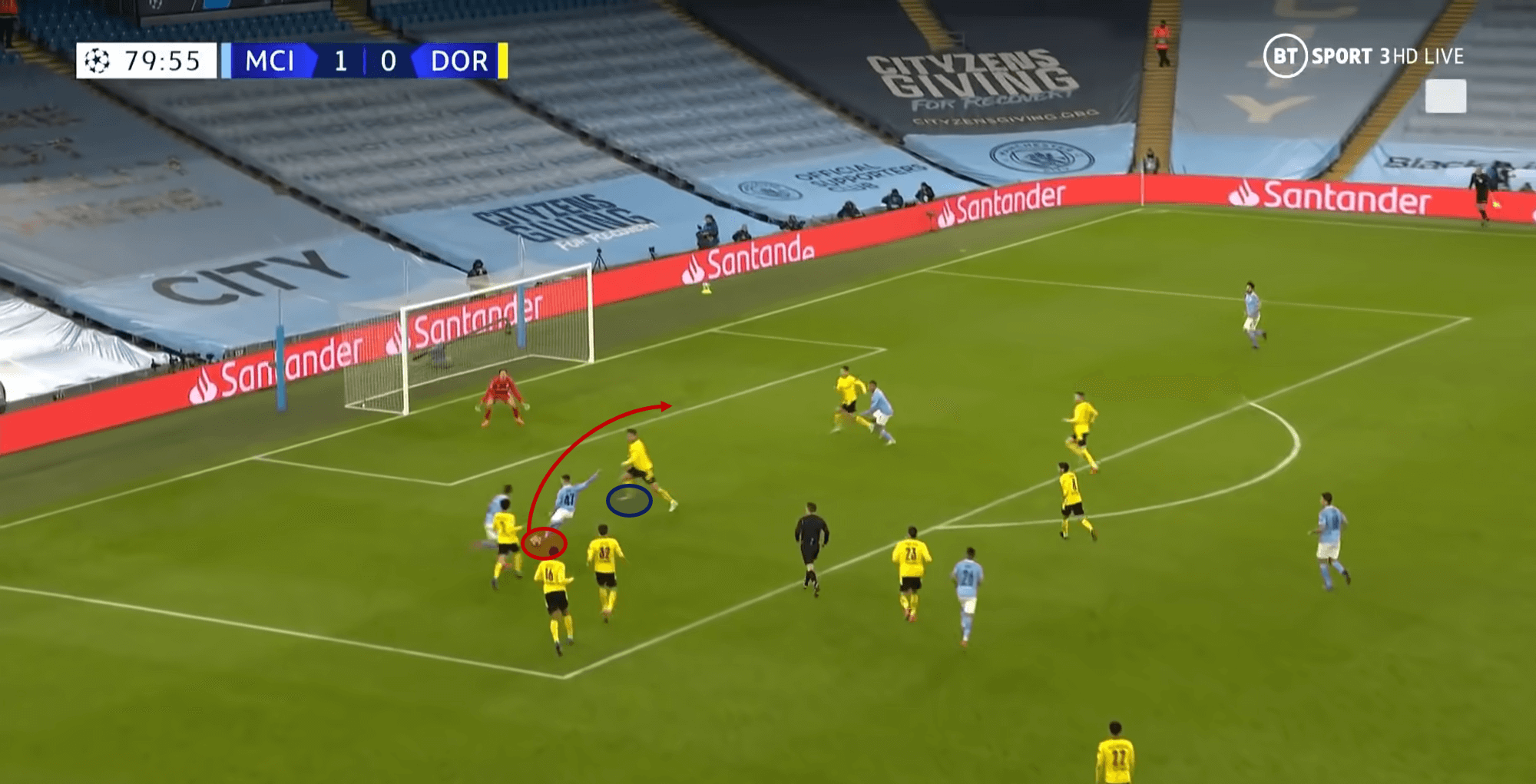 Instead of shooting, Foden opts to play the direct pass across the face of the goal, unfortunately to no one.

City trying to control the game into submission

In the second half, it seems as if Guardiola, influenced by the 1-0 scoreline heading into the break, decided he wanted his team to control the tempo of the second half, drop the line of engagement, and protect the lead. Their energy levels were visibly lower, and while they attempted to control possession, but they struggled to do so thanks to Dortmund’s excellent pressing regime.

It is fair to say that when both sides headed out for the second half, Dortmund won the first 15 minutes. Outside of speculative Foden chance, Dortmund had the majority of attacking endeavours and looked the more threatening side at that time. Dortmund probably created their highest-quality chances in this period, and ones they would score more frequently (according to xG) than the goal they actually scored. 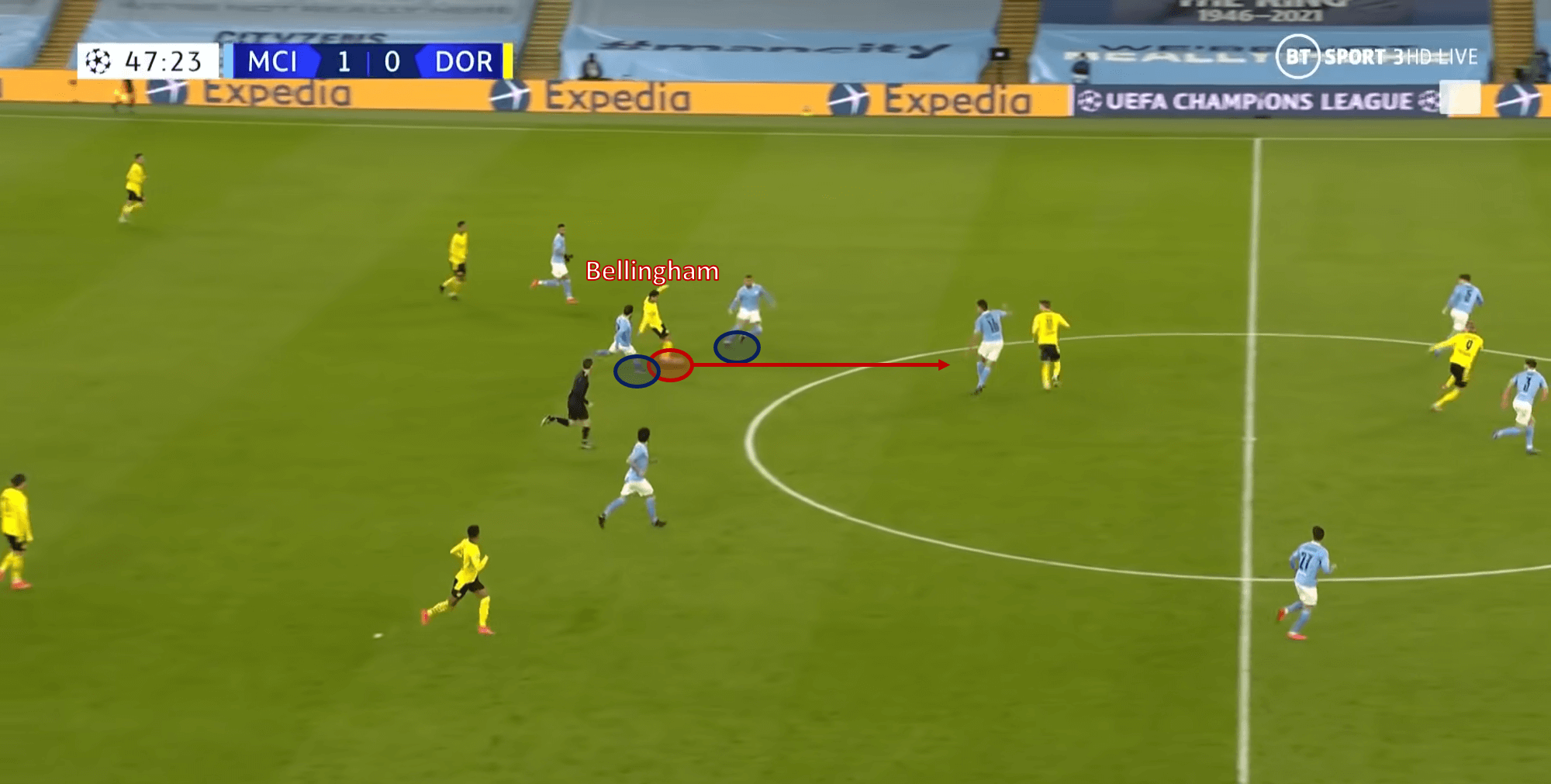 Bellingham plays the long through pass into the path of Haaland’s run, an excellent ball from inside his half.

Haaland is through on goal here, but stumbles upon entry into the penalty area and fumbles his opportunity.

Outside of their attackers though, it was hard to look past Gündoğan as City’s best performer. While for much of 2021, the German has been utilised in more of an attacking #8 role, in this game he was part of a deeper double pivot with Rodri, and the gulf in quality between the two was enormous. Whilst Gündoğan was composed in every phase of play, Rodri looked sloppy, slow, and haphazard in possession and positionally at times.

Overall, City, I would say, just deserved this victory over Dortmund, but it did raise plenty of questions for Guardiola heading into the second leg. 2.1 – 1.1 was the xG tally for this match, which backs up that statement. Bundesliga side Dortmund can head into the next leg with a sense of optimism, they were really able to withstand much of City’s attacking intent in the first half, a team who had won 27 in their last 28 matches. So, in round two, who will win? It’s hard to predict, which makes it all the more exciting to watch.