Tottenham Hotspur hosted Arsenal in an important north London derby in the FA Women’s Super League. This is the second straight year that the Spurs have hosted Arsenal at their new ground, but there were no supporters in attendance, unlike last season. Arsenal came into this match looking to continue their 100% record against their north London rival, including a 2-0 victory in this fixture a year earlier.

Arsenal continue to pursue Manchester United and was boosted by a clinical 2-0 victory that kept them three points behind the Red Devils in the FAWSL’s final European slot. Earlier in the day, Manchester United had secured a rather easy 2-0 victory over a poor West Ham United side, which meant that Arsenal needed a victory against the Spurs to keep pace.

Tottenham came into this match in eighth place, five points above the relegation zone, after replacing Karen Hills and Juan Carlos Amoros in November 2020 with Rehanne Skinner. However, after replacing the pair that moved Spurs up the divisions, Skinner and Spurs have endured a horrible run of form, without a victory in their last six matches. Their last victory came on 17 January 2021- a 1-0 victory away to West Ham United.

Skinner changed her formation from the 4-2-3-1 that drew 1-1 to Bristol City the previous weekend. Her side lined up in a more compact 4-4-2, with Kit Graham and Rianna Dean leading the line for the home side. Two changes were made in midfield, with Josie Green and Gemma Davison getting the start in the derby, while Angela Addison started the match on the bench and Ria Percival missed the match.

Arsenal controlled this match from the beginning, as Tottenham had problems escaping their end of the pitch. Arsenal pressed very effectively, making it difficult for the home side to progress the ball up the pitch. Even with the problems, Spurs resisted the urge to play the ball long and instead continued to try and build play from the back. The result of this stubborn play was Arsenal consistently recovering the ball high up the pitch. 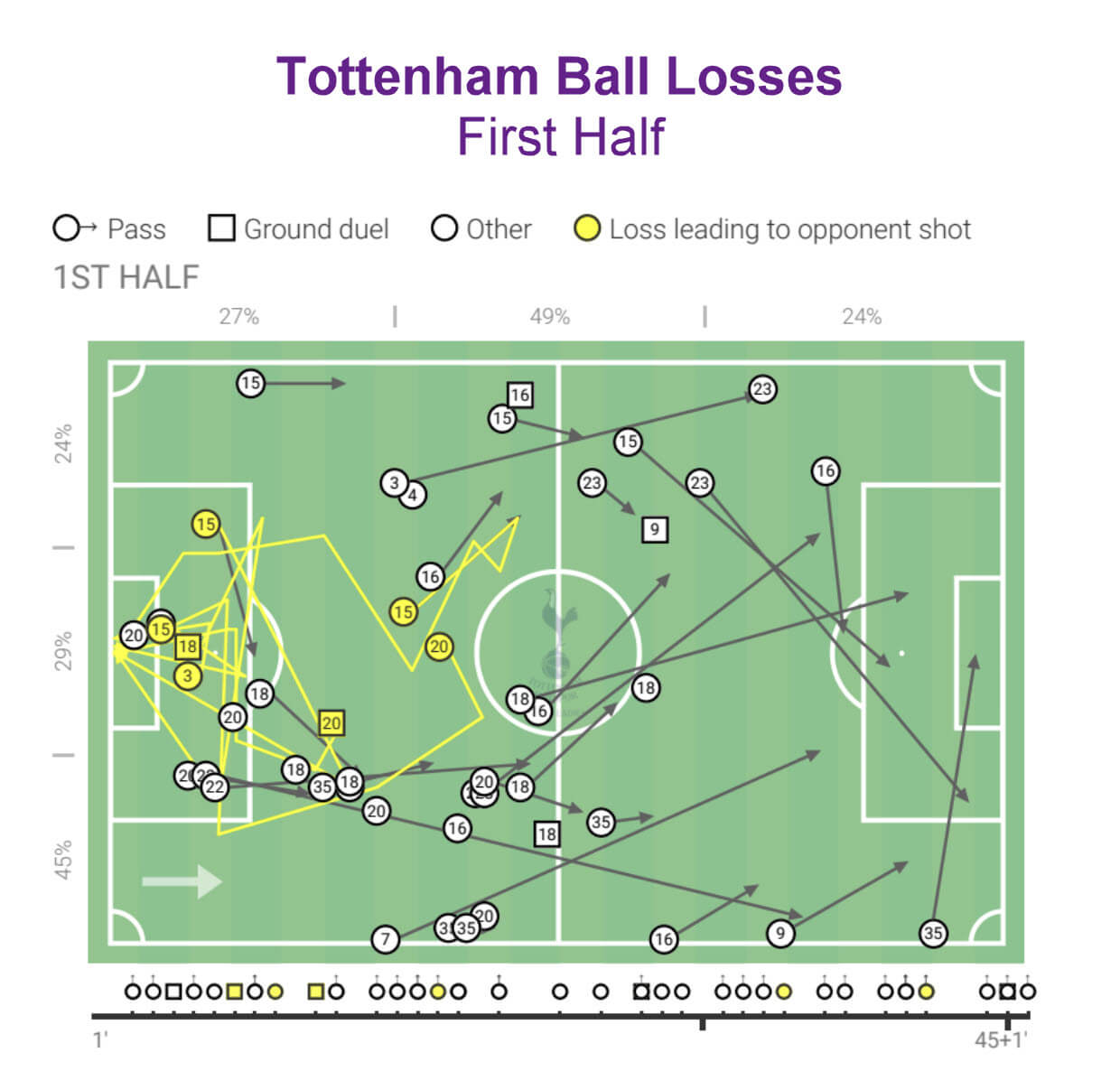 Tottenham tries to counter-press Arsenal after they recovered the ball, and this prevented the visitors from converting the recoveries into easy attacking transitions. As we see in the image below, Kim Little has recovered the ball for the Gunners and is immediately put under pressure by the Spurs central midfielders. The pressure on the ball prevents Arsenal’s captain from being able to get her head up and spot the unmarked runs going forward by Katie McCabe and Jordan Nobbs. This delay is enough to allow the rest of the Tottenham defensive block to get back in position. 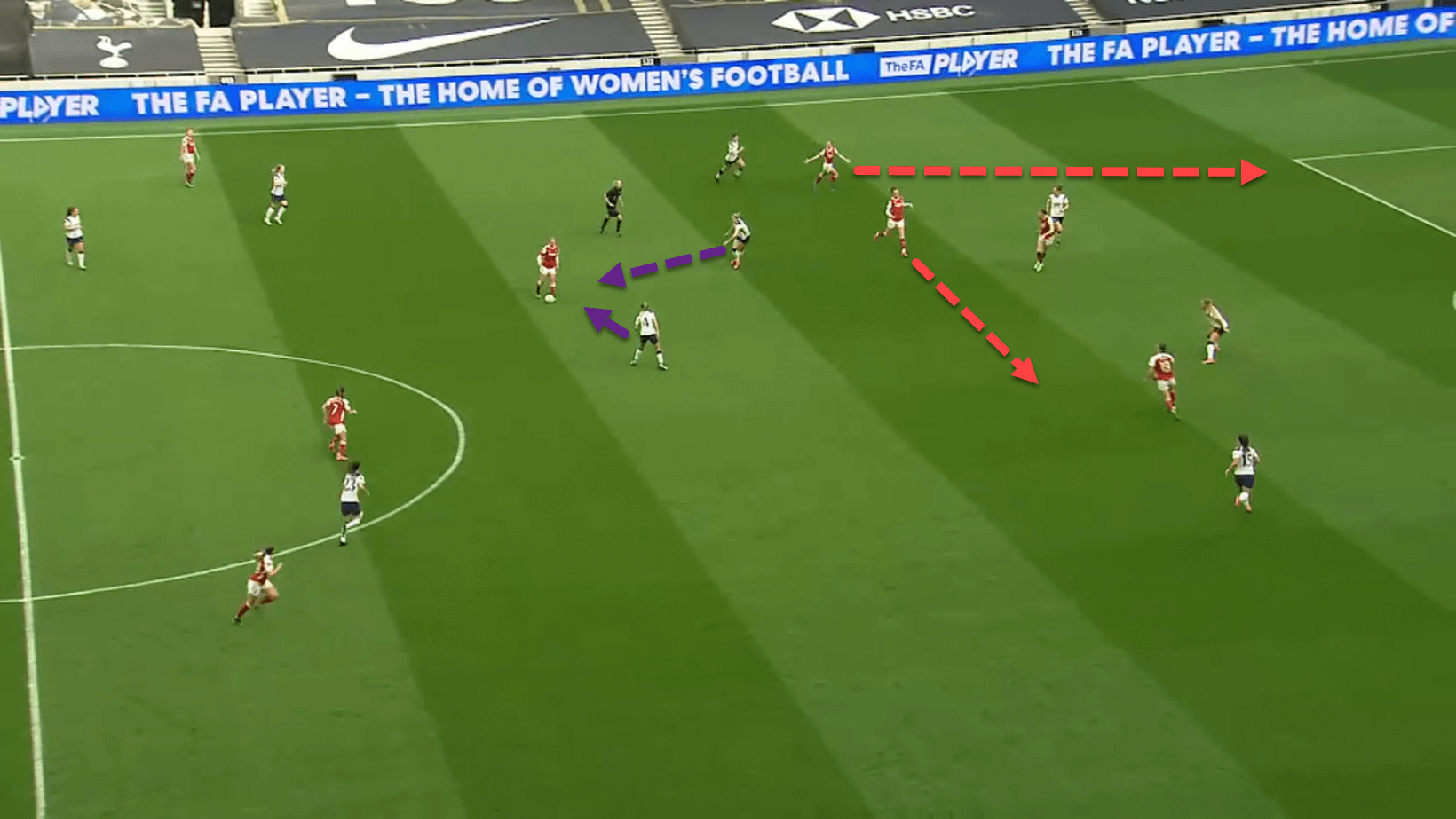 Arsenal attack down the left, and behind the Spurs fullbacks

The visiting side controlled possession, and territory, throughout the match. The most common area of attack came down the Arsenal left side, with joint WSL assist leader Katie McCabe combining effectively with Nobbs and Vivianne Miedema.

One of the first chances for Arsenal came in the opening 15 minutes, as a result of the passing combination down the left side. The image below shows Nobbs coming centrally with the ball, forcing Tottenham right-back Esther Morgan and central midfielder Alanna Kennedy to confront her. Katie McCabe makes the overlapping run, with both Spurs players more worried by Nobbs. In the next image, Nobbs can cut the ball back to play a through ball for McCabe. Caitlin Foord and Danielle van de Donk make runs to the near and far post respectively, dragging the left-sided centre-back and left-back with them. The right-sided centre-back Abbie McManus is forced outside to confront McCabe, leaving space for the trailing run of Miedema. 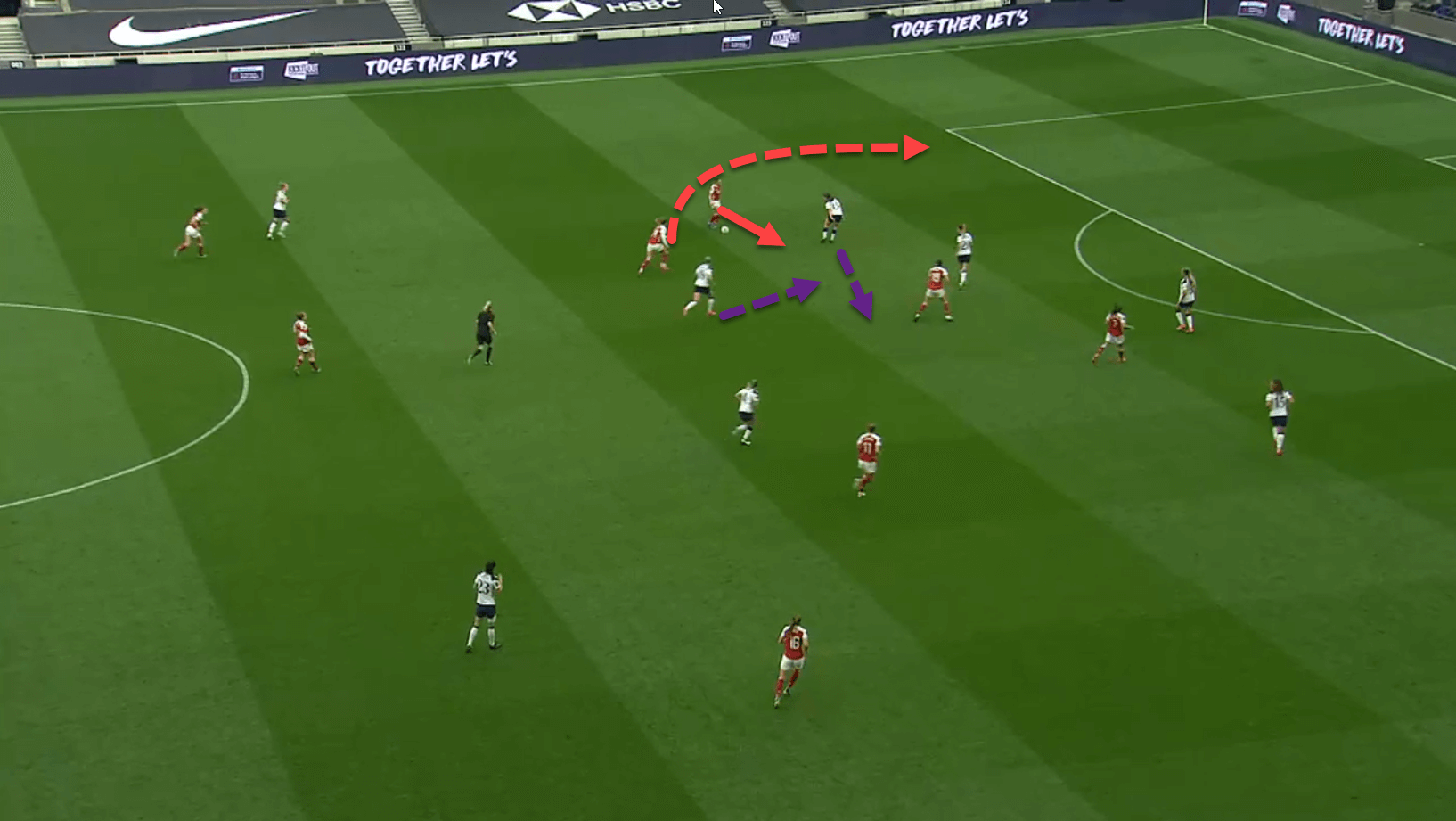 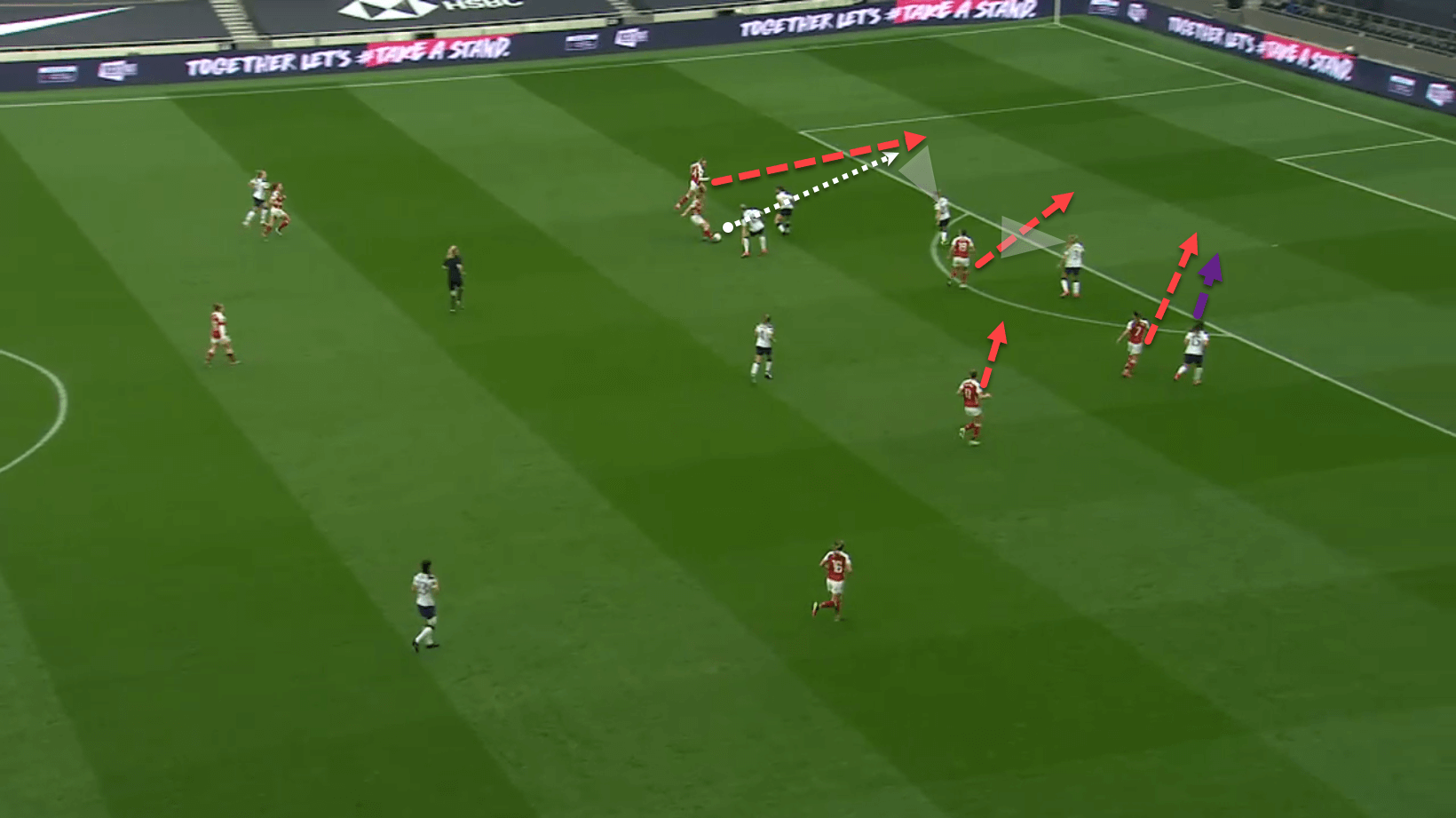 McCabe cuts the ball back, as shown in the final image below, and plays a simple square pass to Miedema in space near the penalty spot. This could have easily been the first goal of the match, but Miedema took a second too long with her touch and Shelina Zadorsky was able to block the shot, allowing goalkeeper Rebecca Spencer to easily collect the ball.

Montemurro’s side seemed to identify the Spurs fullbacks as a weakness, and they attacked them repeatedly but in different ways. On the left side, it was common to see McCabe start the plays from a deeper position. As Arsenal passed out of the back, she would receive the ball on the left side with Nobbs ahead of her on the touchline. Nobbs would come short along the touchline to receive the ball, while Jill Roord would make a forward run into the space vacated by Nobbs. 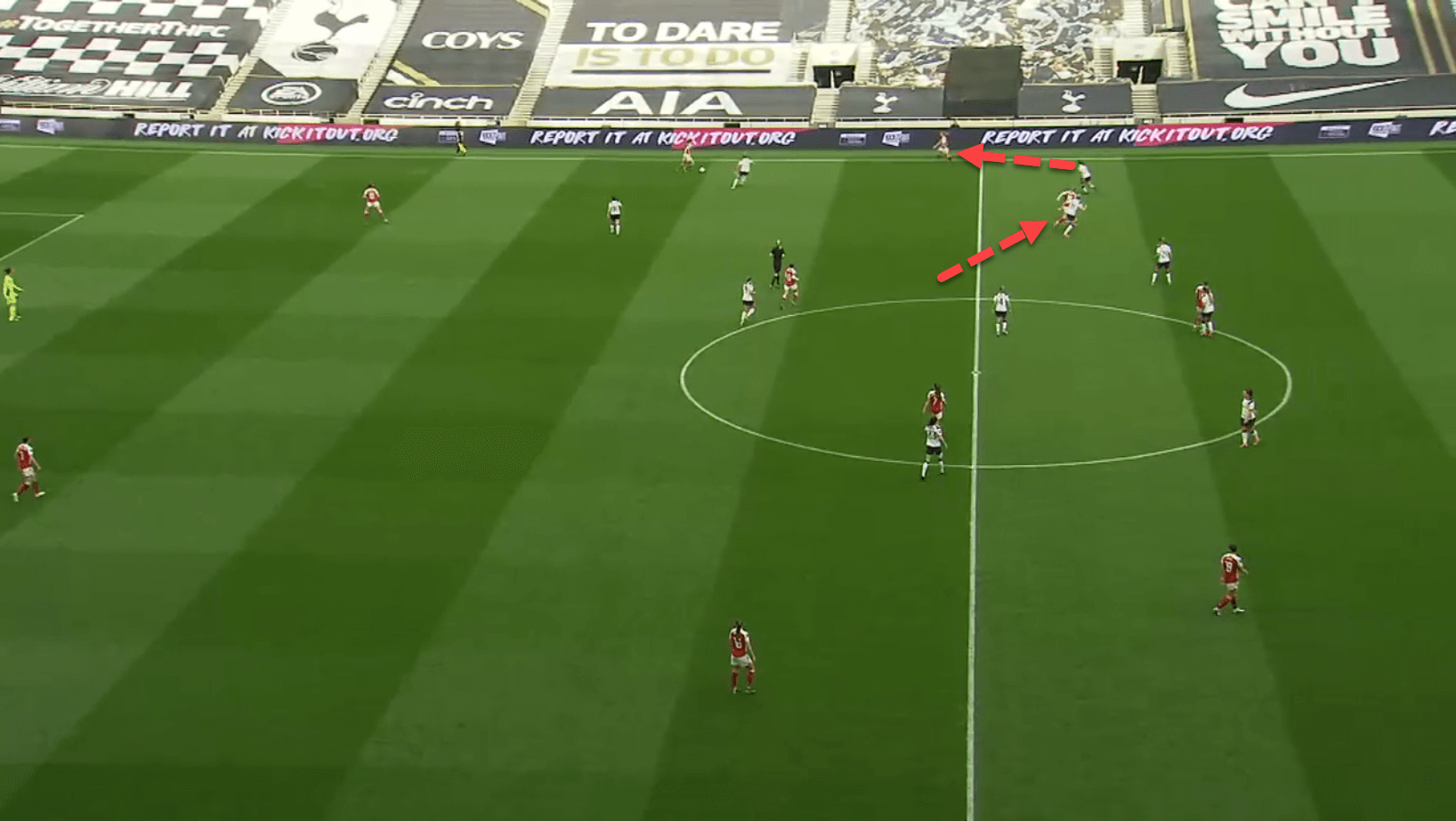 As Nobbs would receive the ball, McCabe would make an underlapping run ahead of her marker. It was common to see Nobbs slide the ball for McCabe to run onto. This was a simple way of disorganizing Tottenham’s defensive structure, and Arsenal did it repeatedly throughout the match. The fact that such a simple set of movements was able to move the Spurs block around doesn’t speak well of the host’s defensive structure. 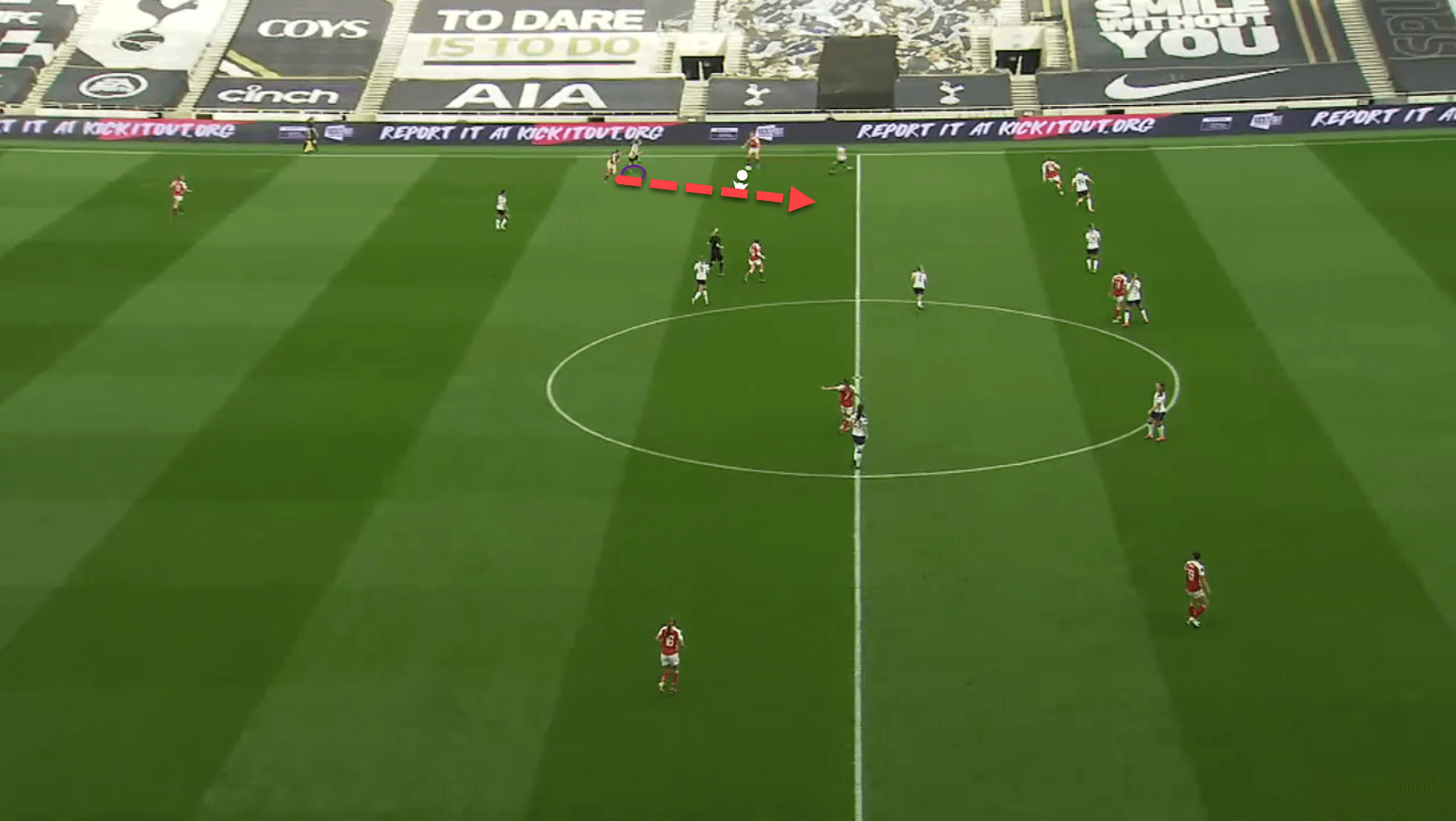 Arsenal had the most success attacking down the left side, but their first goal came on the right. The visitor’s right-winger Foord would prefer to play more centrally, supporting Miedema through the middle of the pitch. This meant it was left to the right-back, Noelle Maritz, to provide the width down this side. A simple one-two pass between Foord and Maritz meant that Arsenal was able to bypass Siri Worm, allowed Foord an easy shot past Spencer.

With the first goal, the match looked to have already gotten out of reach for Tottenham Hotspur. Arsenal continued to take advantage of the Spurs fullbacks, created numerous scoring chances in these wide areas. Arsenal’s wingers and fullbacks combine to run into space beyond the host’s backline. The only solution for Tottenham would have been for their wingers to drop deeper, and provide more cover for the beleaguered fullbacks, but this never happened. 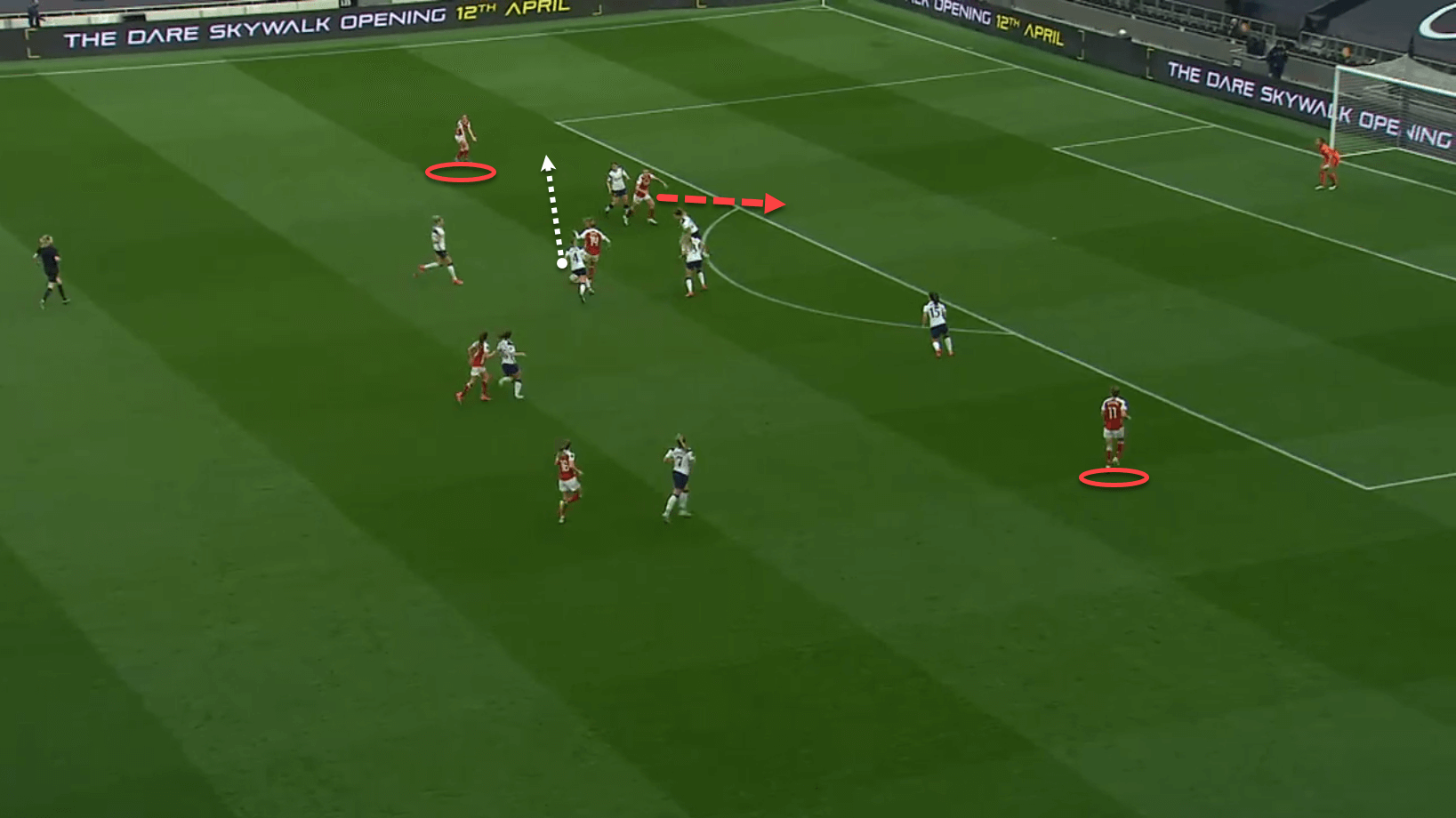 The image above shows how Nobbs makes a run in the channel between Spurs’ centre-back and right-back, allowing Arsenal’s left-back McCabe to run completely unmarked into the final third. Tottenham’s right-winger Gemma Davison doesn’t mark the run by McCabe, instead choosing to retreat centrally to provide very little assistance against Roord.

Tottenham didn’t just struggle in the wide areas, they also had issues in the middle of the park as their two central midfielders, Kennedy and Green, were forced to confront three opposing midfielders. Not only was there a deficit in quantity, but also quality.

Arsenal found it easy to move the midfielders around the pitch, creating pockets of space for others to operate in. The two images below show an example of this, as Roord comes towards the ball, showing herself available for the pass. Kennedy marks her, but this leaves space for Kim Little to receive the ball as it bypasses Roord. 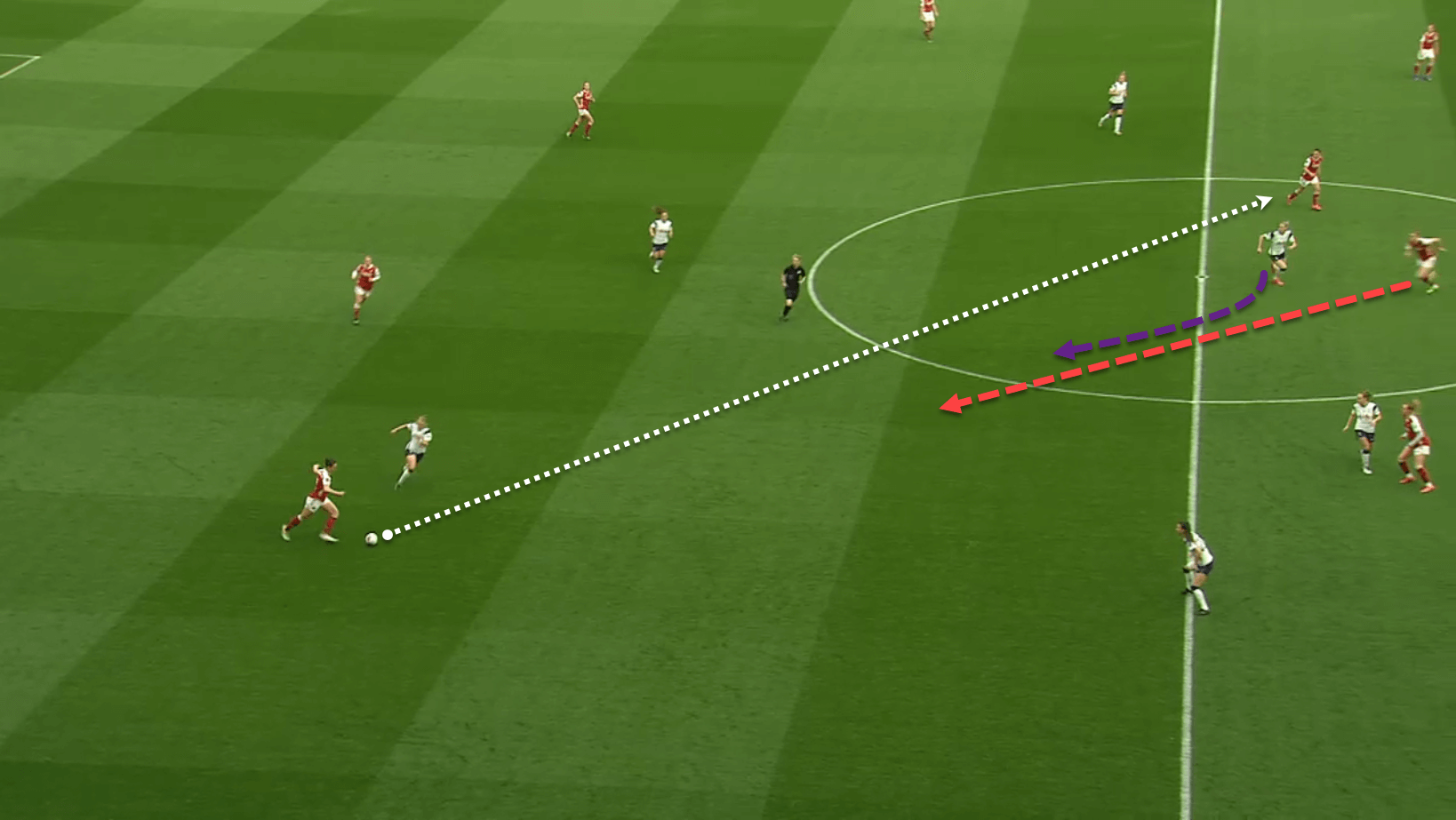 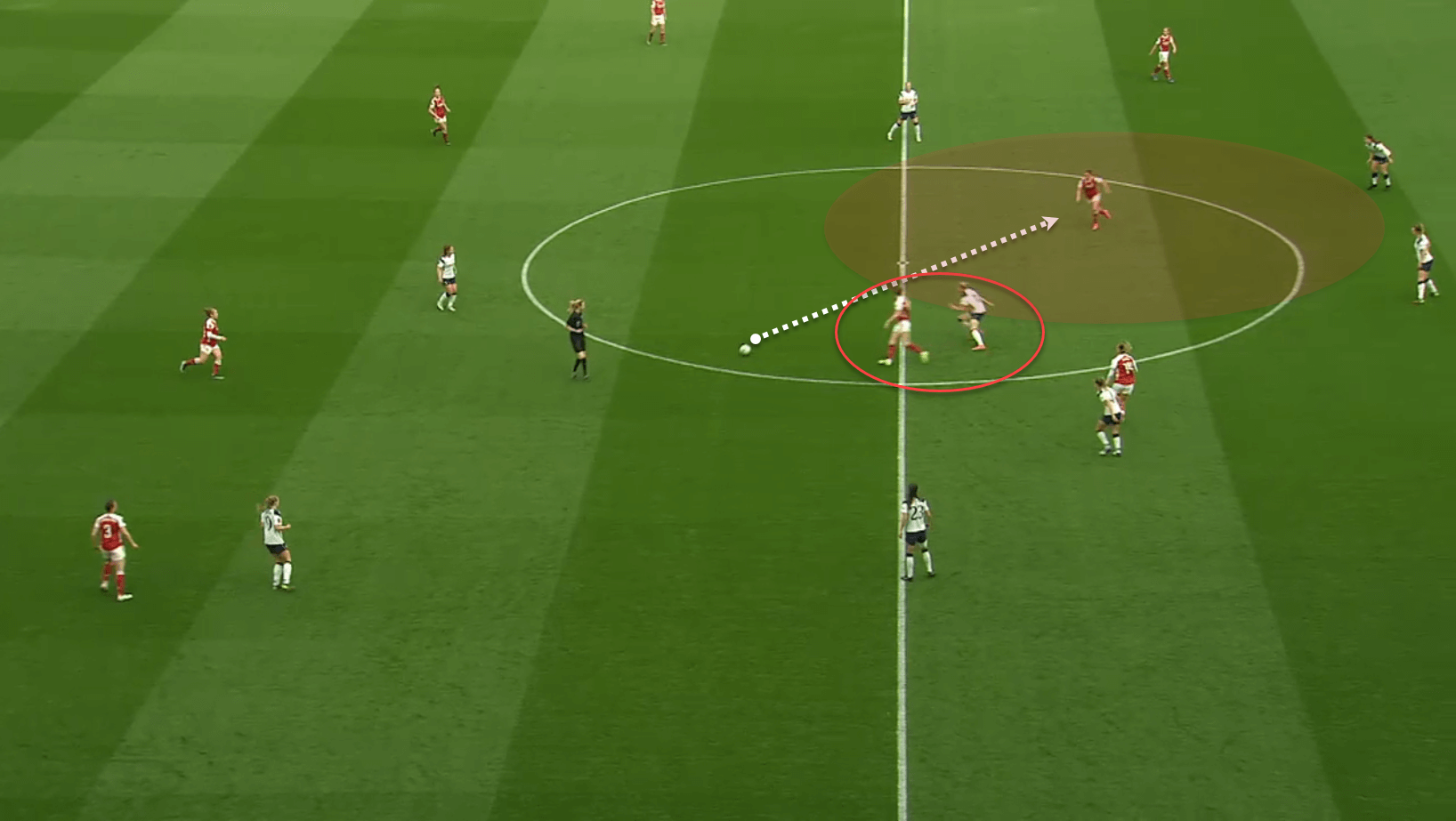 Arsenal got their second goal of the match in the 35th minute, from a corner. Tottenham seemed to switch off at the corner, allowing Arsenal’s best player, Vivianne Miedema, to find several yards of space just outside the six-yard box. She was able to put the ball home with a sweetly struck volley that left goalkeeper Spencer with little to no chance of making a save. This goal provided an example of not only structural but also mental weakness in the Spurs defence. A marking lapse can be the only reasonable explanation for leaving such a dangerous player unmarked.

The third and final goal came early in the second half and resulted from another mental mistake from the home side. A simple backpass to Morgan was easily intercepted by Katie McCabe. An important part of this goal was the dominance that Arsenal showed throughout the match, as was evident by McCabe pressing the opposing fullback in the final third of the pitch. 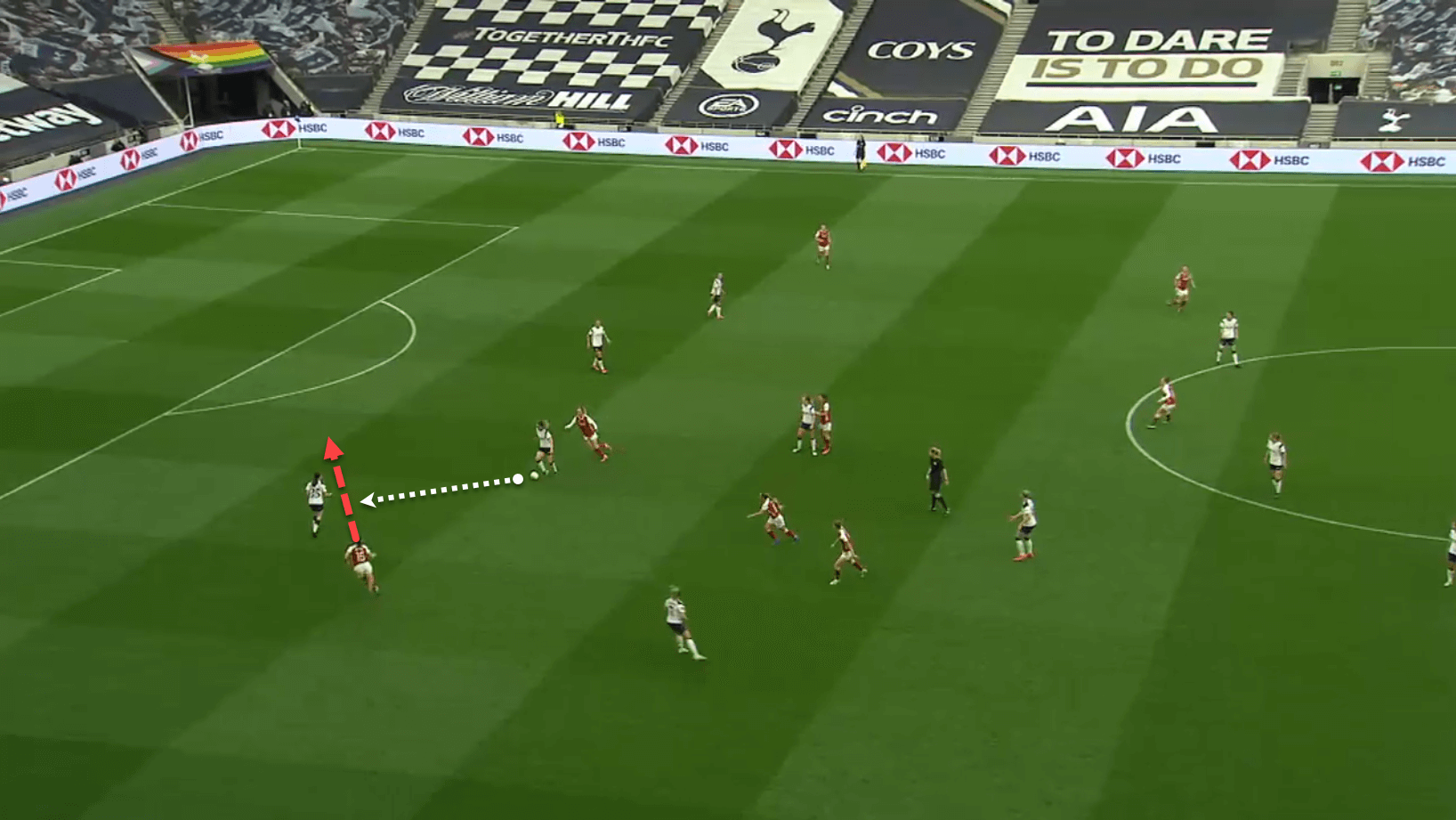 After the third goal for Arsenal, Tottenham made a change that allowed them to become a more attacking threat. Rachel Williams came into the game, playing up front alongside Graham, but the match was already over at this point. Perhaps more attacking ambition earlier in the match may have allowed the Spurs’ defence more space to breathe, but it seems unlikely. The visitors took all three points convincingly, showing how dangerous this side could be if they can play this way regularly. This victory meant Arsenal continues to trail Manchester United by three points for the final UWCL spot, but the quality on display in this match has to leave Casey Stoney’s side worried.