Dash Deadlock: How Houston and Chicago Red Stars cancelled each other out tactically in the NWSL Challenge Cup

The NWSL Challenge Cup kicked off last week with some competitive matches including the Houston Dash Women vs Chicago Red Stars Women clash. The game ended with a 0-0 draw that does not really serve the ambitions of both teams ahead of their next tough encounters.

In this tactical analysis article, we will break down the tactics of both teams to see why did the game end scoreless and what prevented both teams from scoring, and this will be done while relying on data, extensive analysis and consideration of the game’s key actions.

Houston Dash, coached by James Clarkson, started the game with the 4-1-4-1 formation relying on Lindsey Harris as a goalkeeper, Haley Hanson, Megan Oyster, Katie Naughton and Ally Prisock in defence, Gabby Seiler as a defensive midfielder, Shea Groom and Emily Ogle as central midfielders with Katie Stengel and Brianna Visalli as wingers to support Veronica Latsko, who is the team’s striker, in the attacking phase.

Chicago Red Stars however played this match according to the 4-2-3-1 formation, a formation that many teams in Europe are using with success actually, such as Manchester United, Bayern Munich and Atletico Madrid. And head coach Rory Dames preferred to use this formation for this match with Cassie Miller as a goalkeeper, Casey Short, Kayla Sharples, Sarah Gorden and Arin Wright in defence, Danielle Colaprico and Morgan Brian Gautrat as central midfielders, Kealia Watt and Sarah Luebbert as wingers with Vanessa DiBernardo as an advanced playmaker just behind Katie Johnson, the team’s striker. 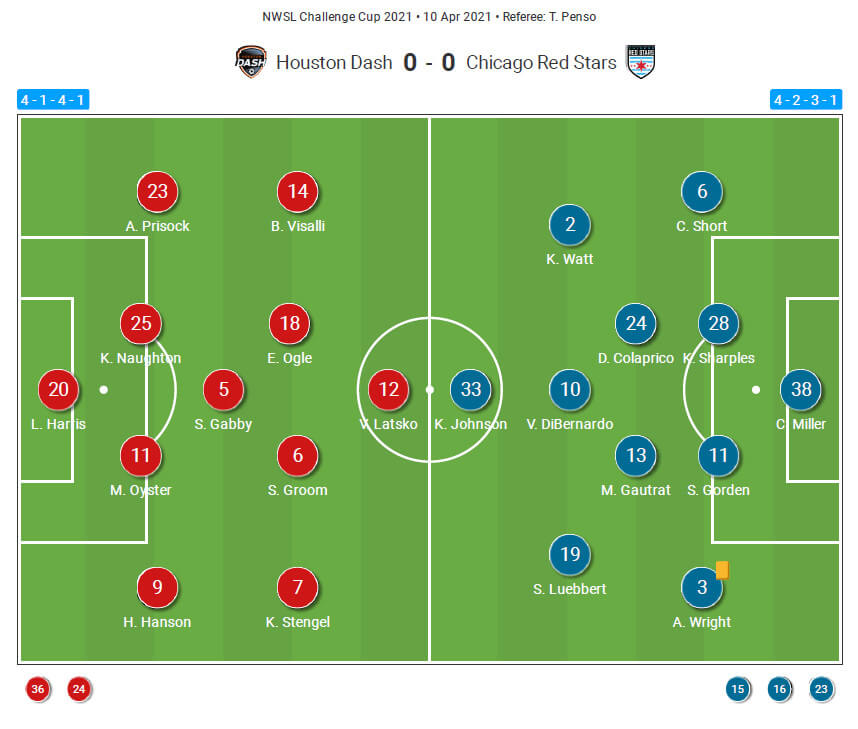 Both teams started the match with a low tempo as opposed to expectations, and we saw Houston Dash having more possession in the first-half yet they were not really able to have an advantage with that possession even though they threatened Chicago Red Stars’ goalkeeper several times.

Houston Dash relied on Gabby Seiler to link defence to midfield as she played in front of defence and was key to the build-up of the majority of Houston Dash’s attacks. Seiler was very useful to her team especially thanks to her continuous intelligent movements whenever one of the two centre-backs had the ball in defence. For instance, you can see how she positioned herself on the defensive line to escape from marking and support both centre-backs in the build-up. She often helped them by providing passing options and then she was responsible for passing to either midfielders or wingers. 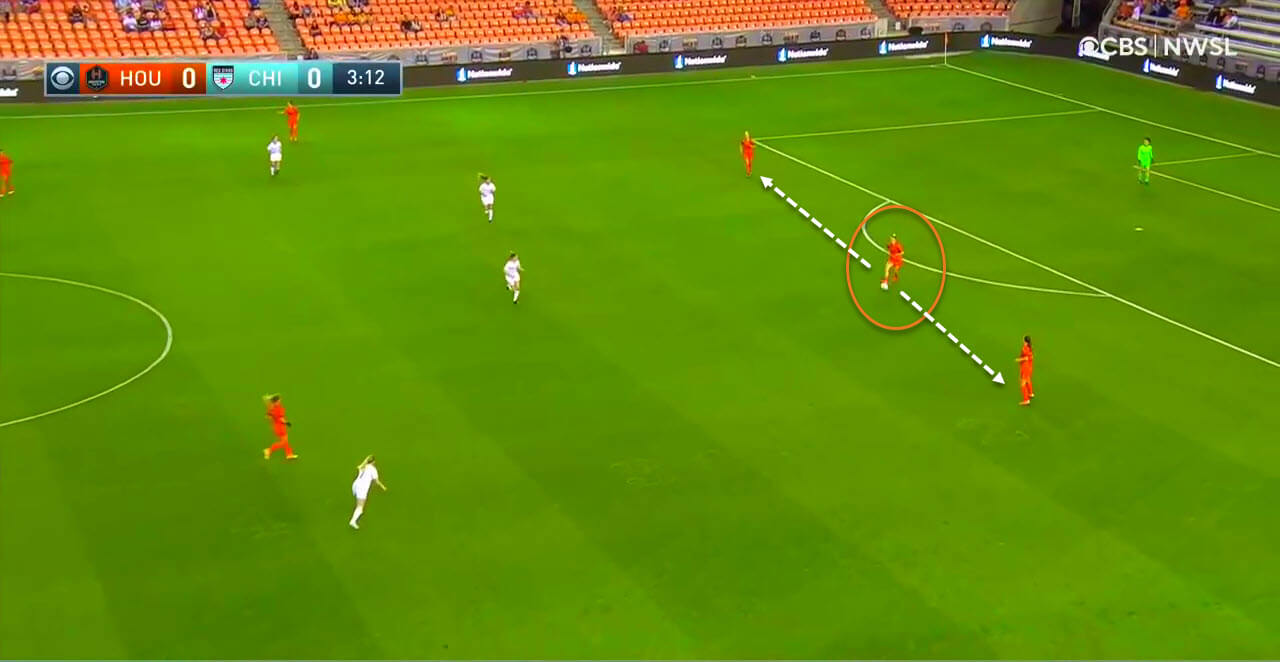 Moreover, whenever she got the opportunity of advancing, Seiler positioned herself in key spots and was very dynamic in doing that and in exploiting the fact that she was unmarked in the numerous times in which she advanced to attack. And as an example, you can notice how she got the ball in a dangerous zone in the picture below and she waited for her teammate to move without the ball in order to give her a through pass behind the defence. 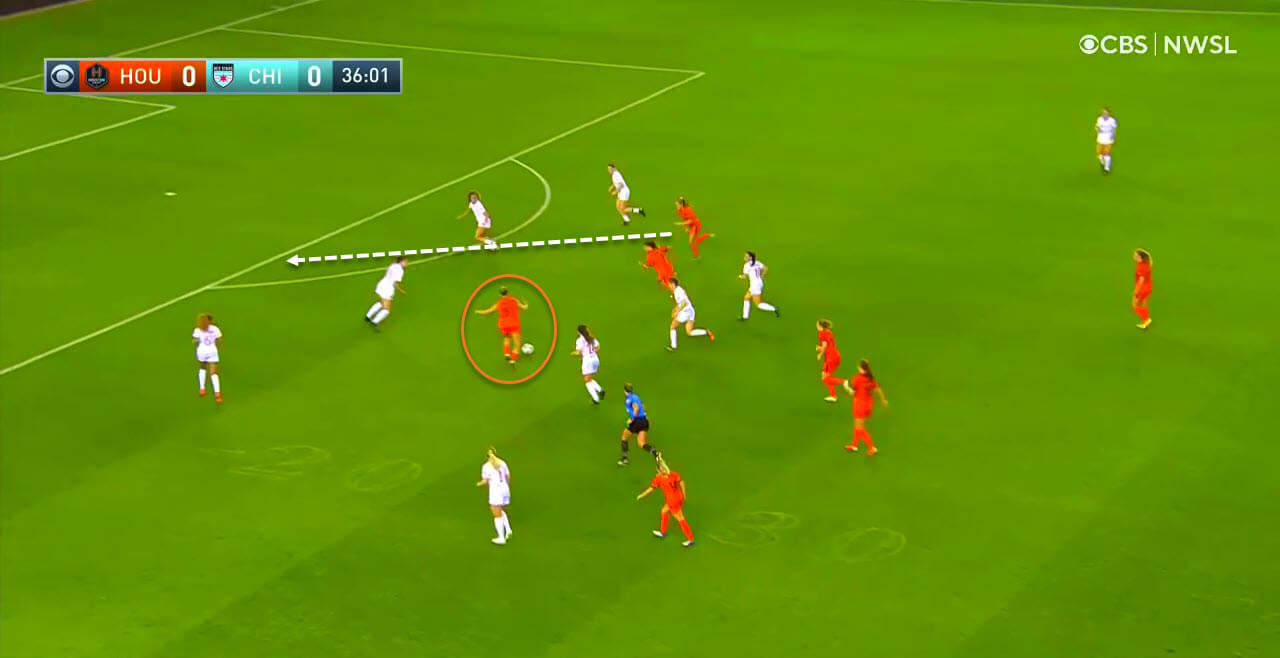 Moreover, Houston Dash resorted to long-balls whenever they had no clear passing options, and both centre-backs relied mainly on Latsko’s physical abilities and strength in aerial duels in order to win balls and keep the attacks going. And at the same time, she was supported by both wingers and the two central midfielders who were always very close to Latsko to exchange passes with her and reach the box, but this was not enough to disturb Chicago Red Stars’ back line. And in general, this is how Houston Dash players were lined-up throughout the game. 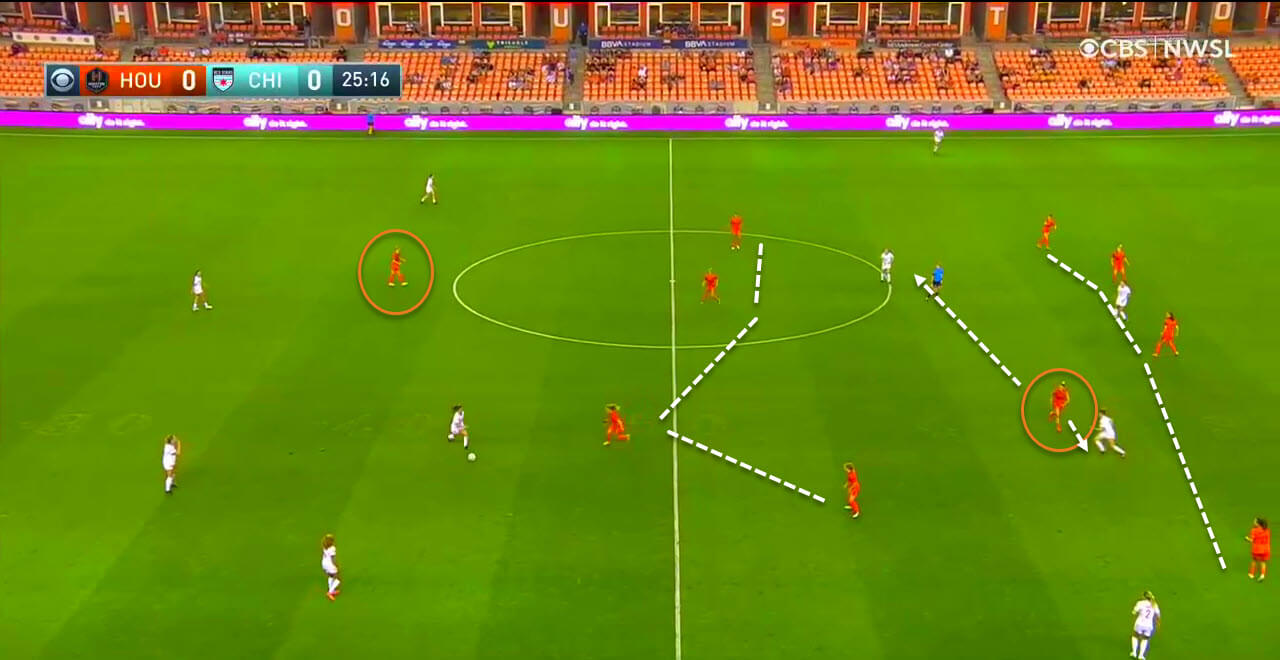 Those two lines helped Houston Dash in preventing Chicago Red Stars’ players from reaching the final third easily, while Latsko was responsible for pressing high on defenders to disturb their build-up phase and Seiler had to make sure that no player remains unmarked at the back of the midfield line, but of course, Houston Dash committed some marking mistakes and Chicago Red Stars were able to reach the box and threaten Harris many times in this match.

Houston Dash however were poor in terms of finishing, they shot only three times in the match with zero shots on target, and this shows just how Houston Dash’s attacking performance lacked determination in the final third and more importantly, the players were not able to overcome Chicago Red Stars’ solid defence easily. And that’s what prevented them from shooting more often especially when bearing in mind that Houston Dash had many absent players such as Rachel Daly who could have been very useful in this regard.

In fact, in the following picture you can see one of Houston Dash’s rare occasions of the match. It was a counter-attack launched by Groom, who slipped but was able to pass the ball to Ogle who gave it to the unmarked Visalli on the left-wing. The latter aimed at shooting the ball near the right post yet her shot went inches away from the goal. But apart from that, Houston Dash were not able to create tangible scoring chances. 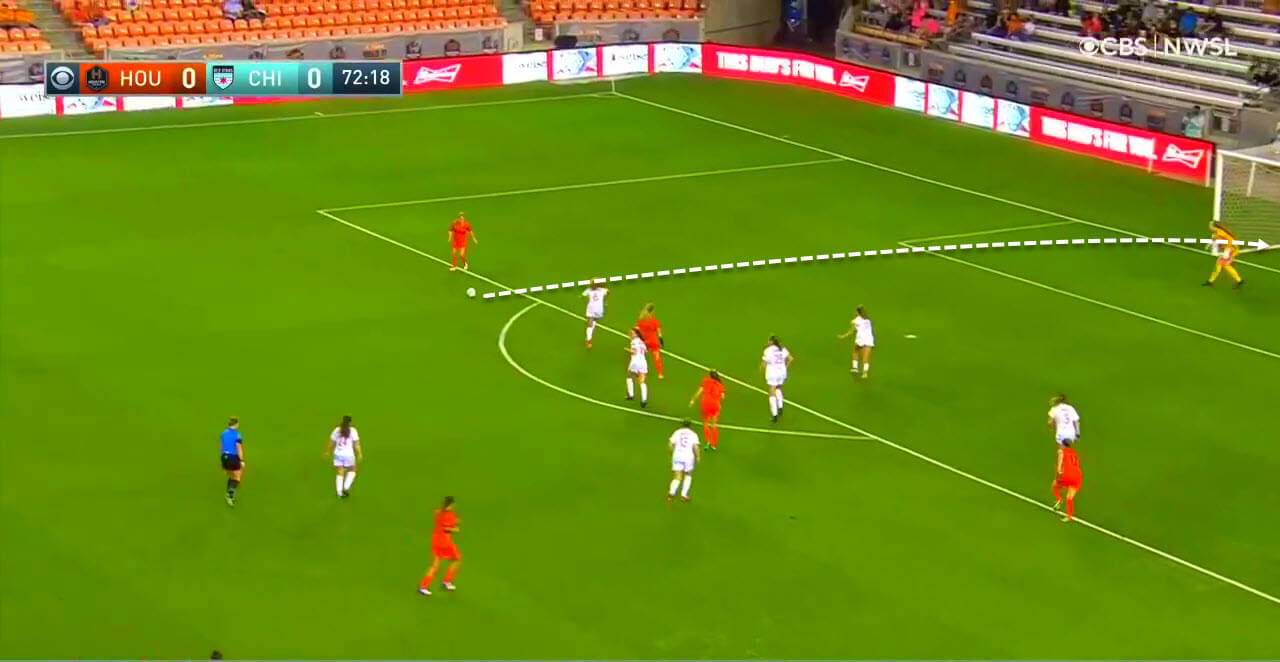 Chicago Red Stars created the chance of the match early in the game and exactly at the 17th minute, when Watt crossed the ball with accuracy towards Sharples who was already inside the box because there was a corner-kick prior to this action. Sharples however, being a defender and not a striker, was not able to put enough power into her shot even though she coordinated her body perfectly to direct it towards the goal. And in the end Harris was able to save her shot which could have been more dangerous if a more attacking player was in the shoes of Sharples. 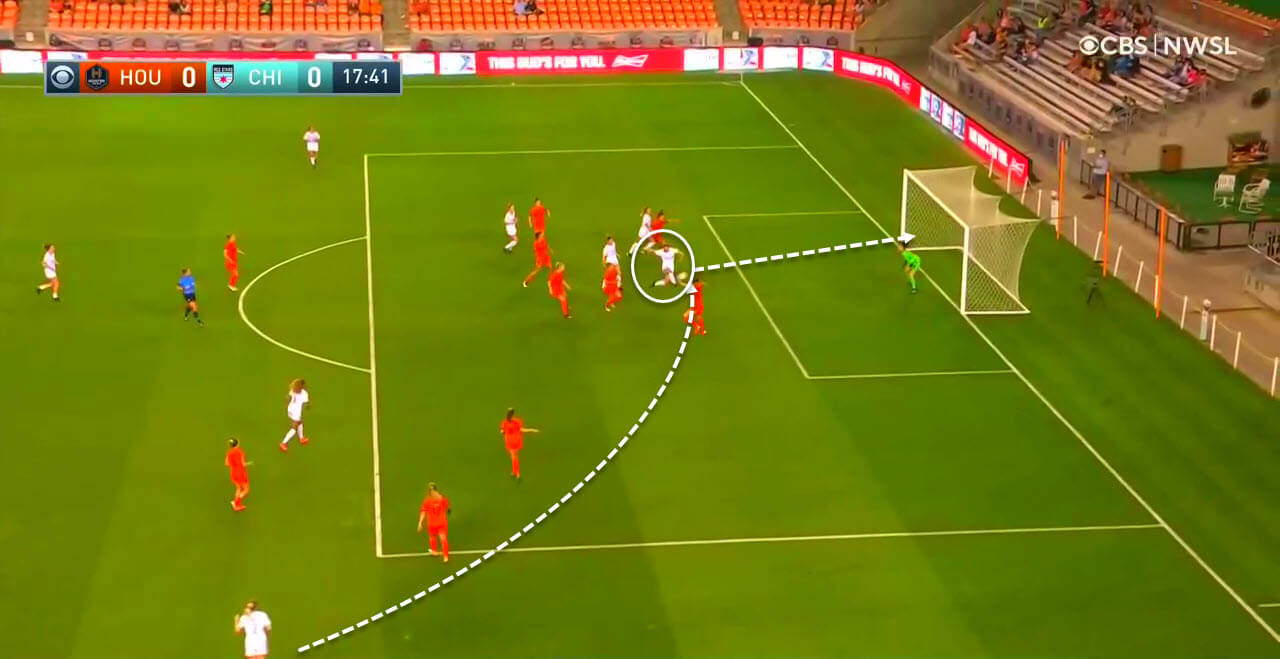 In the second-half, Chicago Red Stars attacked with more determination and looked more dangerous as we saw Harris saving a few shots to save her team from a late Chicago Red Stars’ winner. The three attacking players of Chicago Red Stars, Watt, DiBernardo and Luebbert created a lot of troubles for Houston Dash’s defence and they contributed in making 33 accurate passes towards the final third in this match as opposed to 23 for Houston Dash.

Moreover, DiBernardo had a scoring chance at the 70th minute when she was able to dribble past her marker and shoot from outside the box since Naughton did not disturb her and stayed far away from her. But luckily for Houston Dash, the shot hit Naughton and got deviated and this allowed Harris to save it with difficulty. 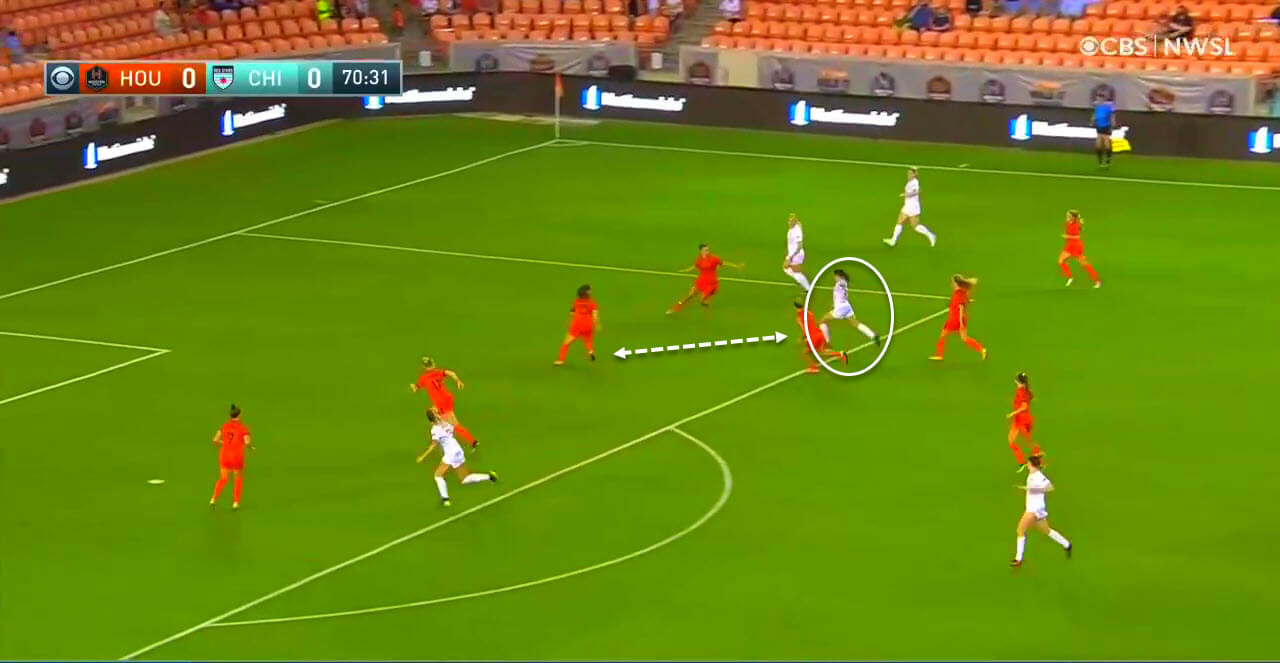 Both teams wanted more than one point out of this match, however, they both lacked a qualitative finishing when they had some few goal-scoring chances. And if we bear in mind that this was their first match of the season, it was normal to see a 0-0 match with a few chances since both teams are similar in level. Houston Dash and Chicago Red Stars should be happy about the positives of the game while considering what went wrong soon in training especially when it comes to the attacking phase to perform better in the upcoming matches and be able to create more chances.