Beat the low block and dominate the flanks: How Liverpool can execute a European comeback

In the build-up to the first leg of this Champions League tie, much of the media focus was centred around Liverpool getting revenge on Real Madrid for their 2018 Champions League final defeat to the Spaniards. Jurgen Klopp & co. were quick to clarify that this was not the case, but now they find themselves chasing the tie after falling to a 3-1 defeat in the first leg.

Both sides come into the second leg in decent league form. Liverpool have won their last 3 Premier League fixtures, while Real haven’t lost a game at all since January 30th and came out victorious in El Classico in La Liga over the weekend, against Barcelona. This tactical preview will provide an insight into some areas Liverpool may look to exploit to kickstart a comeback, while also looking at how Madrid will look to combat that effectively and manage their lead in the tie.

Poor defending and a lack of creativity cost Liverpool dearly, and they will definitely look to rectify these areas in the second leg. Los Blancos have a few notable players absent – Dani Carvajal, Sergio Ramos, and Raphael Varane are all likely to miss the second leg, along with Eden Hazard and Lucas Vazquez. However, it is possible that Varane makes a comeback if he recovers from Coronavirus in time. Meanwhile, the Reds have no fresh injury concerns other than the ones that existed before the first leg. Curtis Jones missed Liverpool’s weekend win over Aston Villa as a precaution and is 50/50 to return to the side for this second leg tie. Below you will find the predicted lineups for both sides. 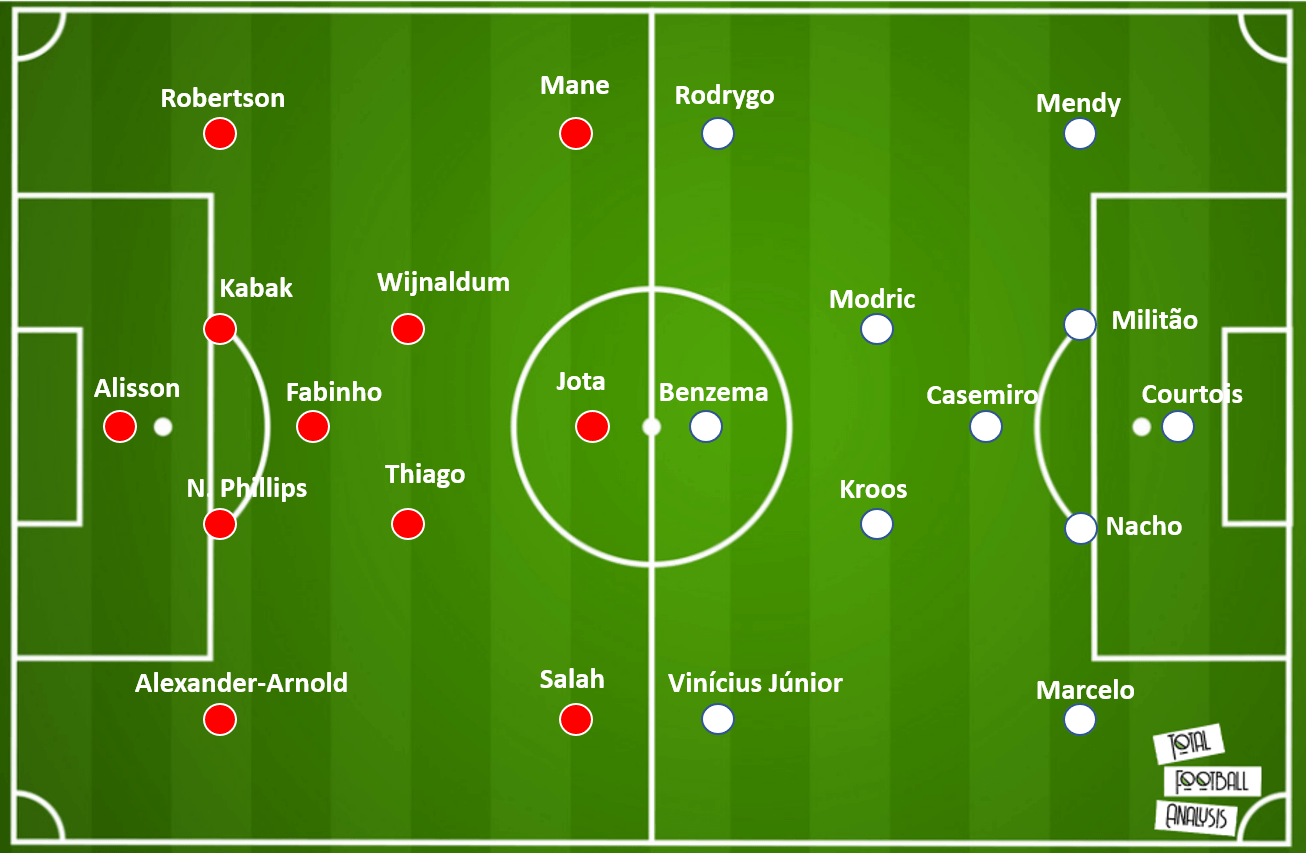 We expect no formational changes from either side’s lineup from the first leg, with both clubs likely to deploy a 4-3-3 formation. Diogo Jota gets the nod ahead of Roberto Firmino due to his superior form, with Thiago partnering up with Wijnaldum in the middle – Jordan Henderson is still out injured. The Dutchman’s role may fluctuate between attacking and defending duties to aid with coping with the Madrid wide counterattack. While it is possible for Varane to make a return this week, we feel as though manager Zidane will stick with Militão in a cautious move. Real’s big dilemma lies at right back. With Carvajal and Vazquez out, Odriozola is the only senior right back at the club, but it would appear that Zidane does not have full faith in the player. Due to this, we think Mendy could move to right-back, with the experienced Marcelo coming in at left-back. Meanwhile, Rodyrgo’s quickness and tricky feet may lead to his selection coming at right wing ahead of Marco Asensio.

Reds to attack the flanks

Building attacking via the wide areas is nothing new to Liverpool. In recent years, we’ve seen Klopp put attacking responsibilities on both full-backs, with the winger, often Mane and Sane, causing havoc for the opposition full-backs. Liverpool may look to attack this way to exploit a weakness of Madrid’s. Mendy would likely struggle at right-back, especially if Mo Salah is in the mood. Similar can be said of Marcelo – while he was world-class just a few seasons ago, a lack of game time may prove to be detrimental. Finding success in wide areas could be a game-changer for Liverpool, especially with the form that Jota is in.

This example of Liverpool attacking wide in the first leg shows that there is an opportunity to be taken in these areas. With Salah on the ball, Alexander-Arnold makes an underlapping run behind Mendy – a decoy run. This causes the Madrid full-back to track the Liverpool right-back, opening up space in the middle for Salah to exploit. This is a move Liverpool have deployed on numerous occasions over recent weeks, with the timing of it becoming more and more well-executed each time. If Liverpool can recreate spaces like this, it would give Salah a number of options – a cross, dribble inside and drive at a Real defender, find a through pass, or take a shot on. While Madrid’s central midfielders pull their weight in a defensive capacity, the wingers do not often share that energy. This will allow Liverpool to create overloads in these wide areas.

This example includes Alexander-Arnold again and shows him in a position that we have become accustomed to seeing from either Liverpool full-back. Completely free of any opponent, Alexander-Arnold drives on towards the byline, effectively playing as a winger in this phase. His positioning and role in these attacks enable both Salah and Mane to take up central roles and make themselves targets for a cross or a pass. This would be something that Sergio Ramos and Raphael Varane would probably be able to handle, but the understudies at the back may have a difficult time remaining organised, making it hard to combat the fluidity of Liverpool’s attacks.

Again, Alexander-Arnold is involved. But, again, we see moves like this on the opposite flank from reds as well. Mo Salah’s tricky feet cause Wolves to commit more men to closing him down, leaving space around Salah to be exploited. Instead of bursting forward in an overlapping run, Alexander-Arnold just sits as a lay-off option for Salah. This then gives the full-back a chance of a cross, and the movement of Liverpool’s front three when they’re in the mood is difficult to deal with. Expect to see Mane and in particular Jota making movements in the box where a Madrid defender fails to track them.

A common theme in Real Madrid’s game plan in this season, especially in bigger games, is to allow the opponent time on the ball. Madrid look to sit back, with the midfield and defensive units compact, soaking up pressure that comes their way. This caused a problem for Liverpool in the first leg, and it’s a system Liverpool have struggled against on more than one occasion.

This analysis provides an example of Real Madrid defending deep in an effective manner – they are compact, leaving very little space for Liverpool to build on the possession they have; the back four also often moulds into a back five for Madrid to plug any spaces that may be a danger – this can be extremely helpful in wide areas as it allows the full-backs to solely focus on man-marking the Liverpool wide men. On the flip side to this, however, being a full back isolated with the likes of Salah, Mane, or Jota could be a very dangerous line to walk to Madrid. The before-mentioned overlapping runs from the full-backs would add another element of danger to Liverpool possession in instances similar to this one. It is worth noting that there is no Madrid player pressing Wijnaldum on the ball. This is usually the case – they wait until the ball meets an opposition close to them before instigating the press. This allows them to swarm the man on the ball with 3-4 players, raising their chances of breaking down the attack and winning the ball back.

However, defending in this way just invites pressure, and can be draining for the defenders – both physically and mentally. Madrid are guilty of not being able to defend with their backs to the wall over a long period of time. We saw most recently in El Classico as they almost threw away their 2-0 lead due to losing their organisation at the back. It resulted in players not being picked up in the box, giving Barcelona more encouragement to carry on attacking the Madrid backline. Liverpool would react in a similar way once they sense Madrid’s defensive approach starting to crumble. Jota will be a key player in times like this as he is extremely impressive at finding even the smallest space to exploit.

As mentioned, Liverpool will likely see a lot of the ball in the second leg tie, with Madrid looking to hit the reds on the break. This was done very well via Vinicius in the first leg, but it’s also a system that Liverpool can look to make impossible for Los Blancos. The reds will have their full-backs in advanced positions on a regular basis, but they will have to be on high alert to plug the space that Vinicius or Rodrygo will look to drop into, halting the counterattack. This is an issue Madrid have faced before and have consequently struggled to transition into attack once winning the ball back on occasion.

Due to the nature of their approach in defence, when Madrid do win the ball back, their only option of possession is to try and launch a counterattack, since they often win possession back deep in their own half, with several opponents in close proximity. This is where Vinicius and Rodrygo would hope to play a huge part for Real, as they can be very dangerous outlets from defensive possession. However, quite often, it has resulted in Vinicius either having the ball but being very isolated, with very little to work with, or the winger spends a lot of time chasing down optimistic through balls. Now, this is where the defensive cover of Fabinho and Wijnaldum will be required, as Robertson and Alexander-Arnold may be too far up the pitch to assist in defending. The two mentioned midfielders are very good at reading the game and breaking up play – especially Fabinho, and it will be their job to work with Kabak and Phillips in isolating the Madrid forwards when Los Blancos look for a direct counterattack.

This analysis is an example of how Madrid struggle to act in an attacking transition, even after winning the ball high up the pitch. There are three attackers immediately present, with reinforcements arriving. There are 2 weak areas that may be of interest to Liverpool. The first is the execution of the attack. Benzema, on the ball, looks to run at the Barca defender, but heads in an entirely different direction to his 2 attacking teammates, effectively isolating himself against 3 Barcelona defenders, killing the attack. The second point is that Madrid’s instinct in this moment was to quickly launch a counterattack (regardless of its quality) when they are outnumbered by Barca defenders – in the last 10 minutes of the game while defending a 2-1 lead. The sensible thing to do would be to slow the game down and await the arrival of support, to kill Barcelona’s momentum. This is something Liverpool will have to be aware of, but they could also use it to their own advantage.

Make no mistake, Liverpool have a mammoth of a task ahead of them to turn this tie around. Real Madrid’s stubborn defending can be hard to break down, which could cause the likes of Salah and Mane wanting to do all the work by themselves. Patience will be key for Liverpool, but this does mean they have to be slow – there’s a difference. Playing to their strengths also helps them exploit Madrid’s weaknesses – recognizing the lapse in focus and organisation in the Madrid defence can be hit by playing combinations in wide areas. In terms of attacking wide areas, if our predicted lineups are correct (with Madrid’s full-backs) we expect Liverpool to target the flank that is not being occupied by Mendy as that is where more weaknesses will lie. Liverpool are in with a shout to make yet another historic Champions League comeback but do not forget that Madrid are serial winners, and are well drilled in their game plan.