Real Madrid outplayed and beat Barcelona in what could still be a season-defining El Clásico in La Liga. Zinedine Zidane continued his dominance over Los Blancos’ fiercest rivals by deploying his team in a slightly unusual system, completely nullifying Ronald Koeman’s newfound tactics.

The hosts cut through their guests with power, pace and a direct approach, leaving them scrapping for the majority of the first half. Barcelona did recover in the second half but it wasn’t enough to salvage a point.

This tactical analysis will dissect both teams’ tactics and explain just how did Real Madrid tally another convincing victory over Barcelona.

We’ll start our analysis by introducing the lineups. Real Madrid made some changes to their roster, partly influenced by the unavailability of some big names like Sergio Ramos and Raphaël Varane, and partly due to Zidane’s new tactics. Thibaut Courtois was still in goal and in front of him was a quartet of Lucas Vázquez, Éder Militão, Nacho Fernández and Ferland Mendy.

In midfield, Real fielded some familiar names in Casemiro, Luka Modrić and Toni Kroos but they were also joined by Fede Valverde, who had an interesting role to play. Finally, Karim Benzema and Vinícius Júnior were Los Blancos’ focal points in attack.

On paper, Real Madrid were deployed in a 4-3-3 formation (4-1-4-1 according to Wyscout) but that wasn’t always the case, as we’ll mention further down the line of this tactical analysis. 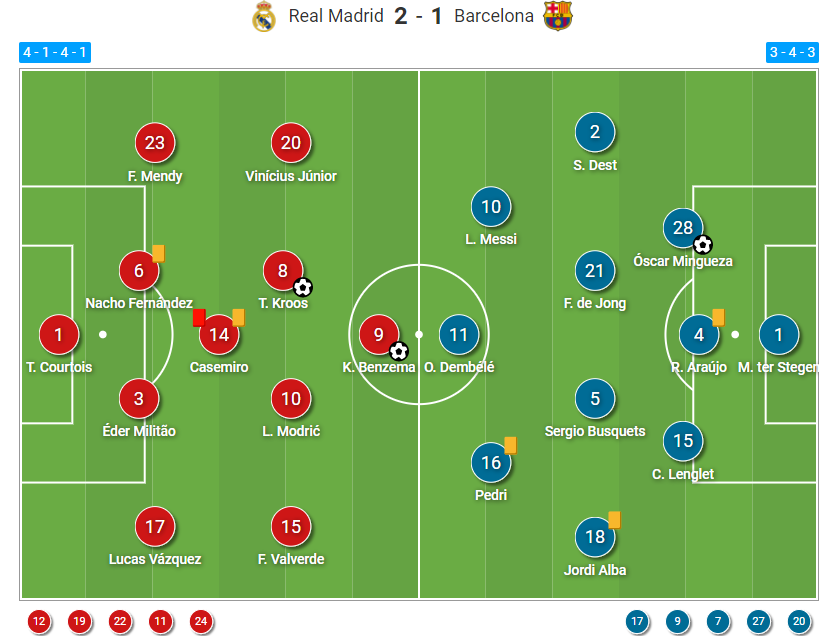 Barcelona, on the other hand, didn’t make many changes to their best XI. With Gerard Piqué still not fully fit, Ronald Araújo started the game, slotting next to Clément Lenglet and Óscar Mingueza in a back three ahead of Marc-André ter Stegen. Koeman opted for Frenkie de Jong in midfield as opposed to his new libero role and the Dutchman was there alongside Sergio Busquets and Pedri, who floated across the thirds throughout the clash.

Jordi Alba and Sergiño Dest provided the width as wingbacks while Lionel Messi and Ousmane Dembélé completed the forward line on the night.

Barcelona were deployed in a 3-4-3 system against their rivals, swapping back to 4-3-3 in the second half.

With 69% possession, Barcelona were able to dominate the ball but couldn’t do much with it. For the majority of the first half, the Catalans were on the attack while it were Real Madrid who caused all the damage. However, despite the narrative being that Koeman’s plan was lacking, that simply wasn’t the case in the first 20 minutes of the game.

The main idea of the 3-4-3 structure was to retain possession and ensure Real Madrid’s high press is nullified by Barcelona’s three in the back system. And in situations when Los Blancos deployed their man-marking press, the visitors were able to play through it to create advantages higher up the pitch. A very similar thing happened with Real Madrid’s initial defensive structure which was offering too much space for their opposition to exploit and find key targets in the half-spaces, specifically Messi. 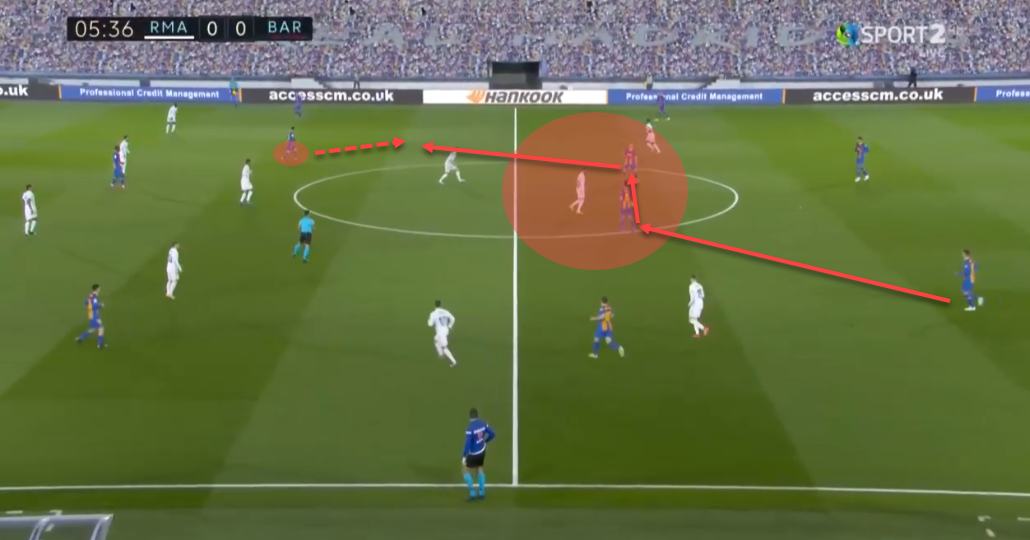 In the above image, for example, Barcelona use their numerical superiority in the first phase to easily progress up the pitch and De Jong is free to thread a ball towards Messi in space. This kept happening in the opening stages of the game and Barcelona seemed in control. However, Zidane quickly adapted to completely neutralise the visitors.

While in certain situations Real Madrid did employ high-press tactics, that was not the case for the majority of the game, as can be seen from their PPDA score of 12.11. Instead, Real dropped into a much more compact 5-4-1/ 5-3-2 structure with Vázquez tucking in as the third centre-back while both Valverde and Mendy completed the back five on their respective flanks.

Now, both Alba and Dest were covered while Vázquez was deployed in a jumping centre-back role, following Pedri deeper and applying pressure upon the youngster’s contact with the ball or simply when he was moving to open a new passing channel. 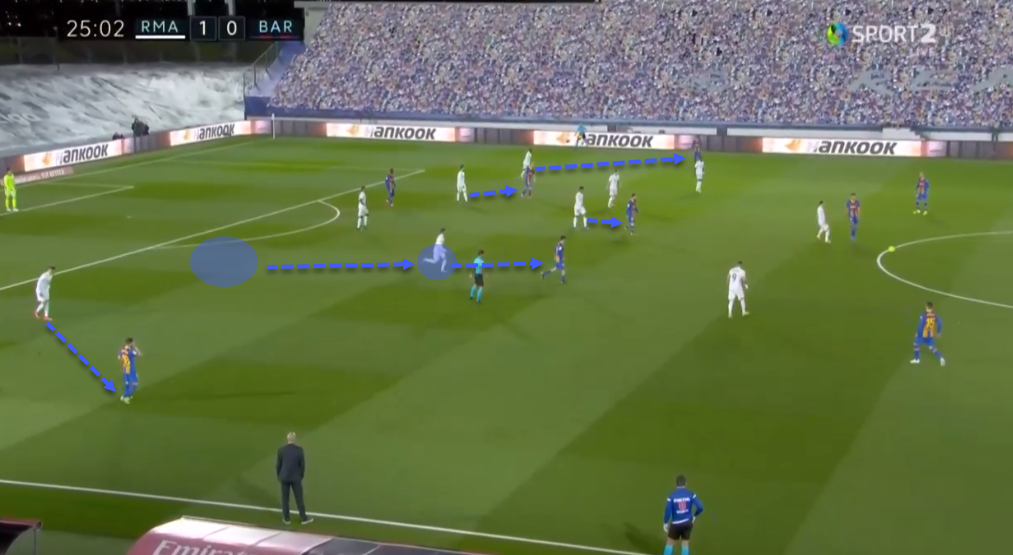 Seeing how Barcelona almost always enjoyed a numerical superiority in the first phase, running with the ball was essential for their centre-backs, especially Lenglet. The Frenchman was the most progressive of their defenders, advancing up the pitch to combine with Pedri and Alba on the left.

Interestingly, Barcelona’s goal arose from such a combination on the left but for the most part, Zidane was once again able to adapt. Real Madrid ensured they were never overloaded by pushing Modrić to meet Lenglet once the latter progressed towards the final third.

That way, he didn’t have the time or space on the ball to deploy a pass towards his teammates. And even if he did, Real felt comfortable in that 3v3 situation with Valverde on Alba, Vázquez on Pedri and Modrić on Lenglet.

With Barcelona’s main width providers in Alba and Dest neutralised and the only other source of pace in Dembélé in those central corridors, they had no other choice but to go down the middle. However, that was perfect for Real Madrid as they could easily collapse on them in and around zone 14, denying them any chance for a shot on goal.

Below you can see Barcelona’s offensive duels (left) and Messi’s dribbles (right), both of which will shed some light on the whole situation. We can see that they were mostly unsuccessful in that particular area, setting the stage perfectly for Real Madrid to counter swiftly upon a ball recovery.

Note that the white squares represent lost offensive duels while the red ones are successful. For the dribbles on the right, it’s self-explanatory: circles were successful and crosses unsuccessful.

With Messi also tightly marked at all times and the middle being congested, the Argentine attempted six shots, five of which were blocked by the defenders, ultimately increasing his tally to seven games in a row against Real Madrid without scoring a goal.

It does feel like Koeman counted on Zidane to come out aggressively, pressing high and trying to disrupt their build-up phase. Him not doing so made the whole three-man in the back redundant. The reason for that is the superiorities it failed to achieve. Barcelona had control over the first phase of attack but lost the numerical advantage higher up where it mattered the most.

The backline had the time and space to run with the ball but didn’t do anything to attract the second line of Real Madrid or disrupt their defensive structure. And with Lenglet being the only real progression option in the backline since De Jong was in midfield, it forced Busquets to drop deeper to assist their advances.

Such a system complicated things higher up the pitch despite a good start to the game. As Real Madrid adapted, Barcelona started suffering a lot and played directly into their opposition’s plan. Zidane’s decision to drop deeper and cut Barcelona apart in transitions was the right one considering Koeman’s 3-4-3 structure with high wingbacks and no rest defence.

The idea was to win the ball in central channels and then use Vinícius as an outlet against Barcelona’s backline. 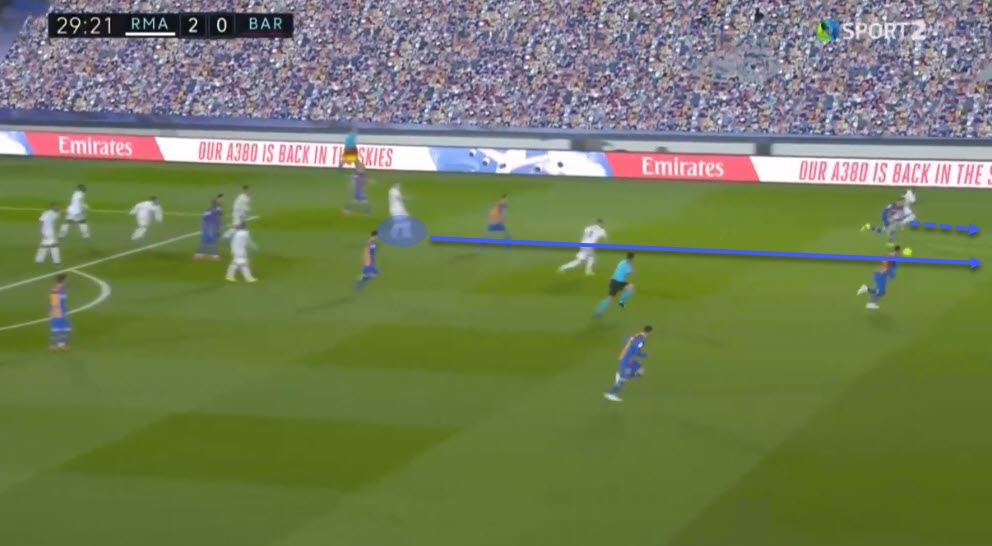 In the example above, we can see how a quick turnaround after an interception results in a clear-cut transition chance. Vinícius and Benzema stay as the highest players on the pitch and more importantly, the former is isolated in a 1v1 foot-race against his marker. Kroos’ ball into space behind puts Real Madrid in a promising situation and this pattern was on repeat for the majority of the game, especially the first half.

One other clear outlet they had was in the form of Benzema. Apart from scoring a spectacular goal, the Frenchman was used as a lay-off option to eject Vinícius as well. Benzema would drop slightly deeper to receive the ball and then use short passes to set up his teammates or execute third-man runs.

The image below is an excellent example of the same thing. 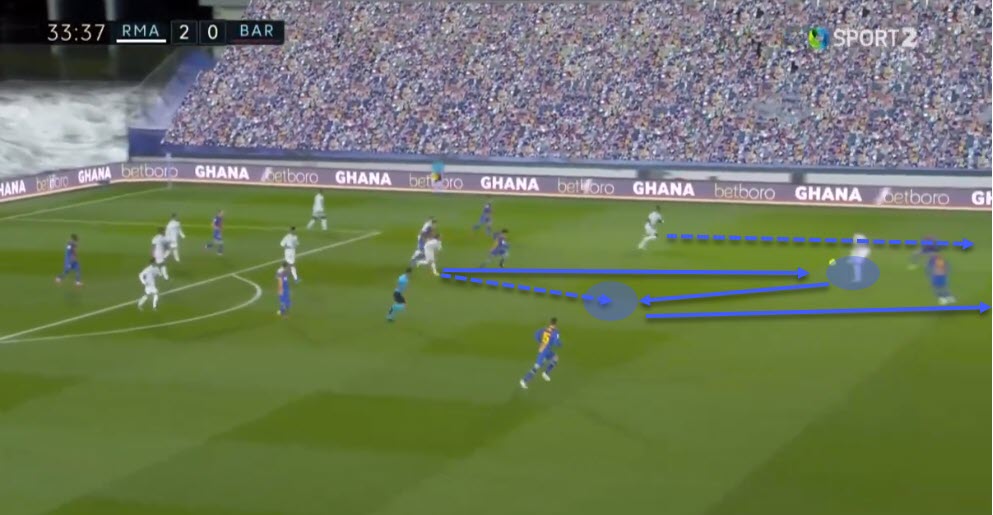 Modrić finds the Frenchman from the deep and all Benzema does here is lay the ball off back to the Croat. But that is enough to first attract Barcelona’s backline and make them push up, leaving space behind their backs to be exploited by Vinícius.

The young Brazilian bursts forward and Modrić uses his extraordinary vision to find his run higher up. The key here is to achieve that isolation and put their forwards in 1v1 duels against the backline. Whenever they managed to do that, Los Blancos were extremely dangerous and we can see it from the stats as well as they had 14 counter-attacks on the night with four ending with a shot.

It has to be noted as well that Barcelona’s counter-pressing was also lacking, which was directly responsible for the first goal. Let’s dissect it a bit more below. 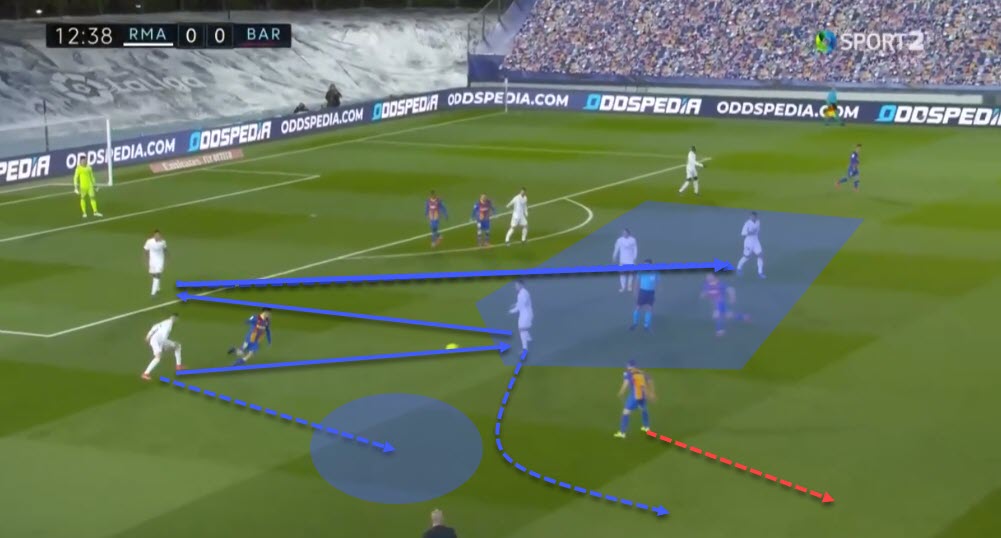 Barcelona lose possession in the final third of the pitch but their counter-press is very disjointed and leaves too much space for Real Madrid. Notice how De Jong is overloaded in the middle and Vázquez’s movement drags Alba away, opening space for Valverde to step into.

With only Pedri and De Jong pressing and Busquets late to arrive from the deep, Real Madrid have no issues playing out of the counter-press, ending the play with an impressive backheel goal by Benzema.

Despite a very shaky start, Koeman made some good changes in the second half, almost enough to salvage a point on the night. Antoine Griezmann replaced Dest and Barcelona shifted to their more traditional 4-3-3 formation with Messi as the false nine.

This system mostly utilised a two-man backline in possession, creating a diamond in midfield and ensuring numerical superiority in the second as well as the first phase of play. The centre-back duo was enough to overload Benzema while Messi at the tip of the diamond created a superiority over Real Madrid’s midfield trident. 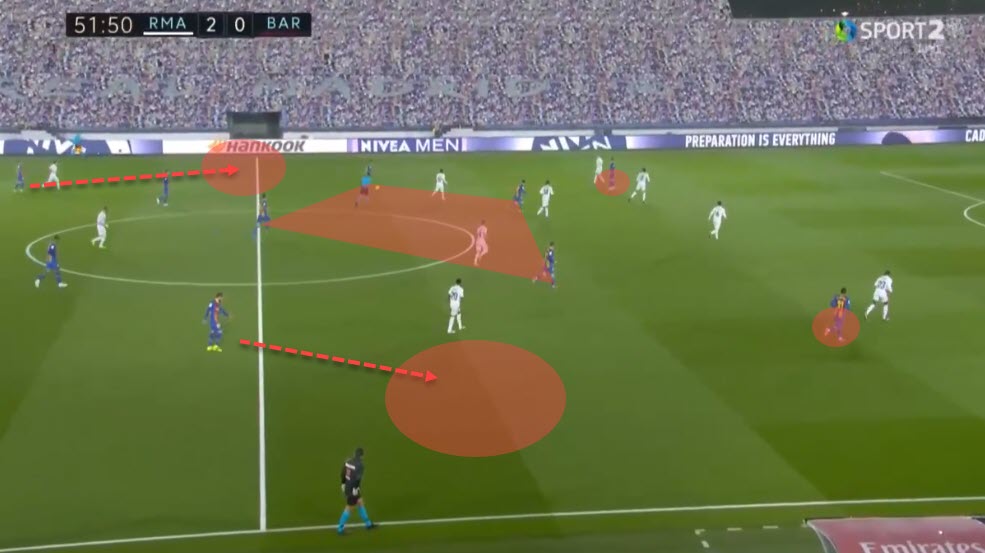 But it’s also important to note how Griezmann and Dembélé are now pinning the full-backs, forcing them deeper and thus limiting Real Madrid’s transitional options. With superiority in the middle and width on the flanks, Barcelona were now far more dangerous while also improving their rest defence.

The following image will also show us how the newly introduced system aimed to do that by plugging the holes behind the wingers. Whereas before, Barcelona’s wingbacks would leave acres of space for Real Madrid to attack into, now with wingers there instead and full-backs covering behind, it was difficult for Los Blancos to get out of their half so efficiently.

Barcelona managed to create good chances and even rattled the frame of the goal in the final moments of the game. However, the inability to take their chances was a huge aspect of the clash and ended up costing them dearly.

The season-defining El Clásico fully delivered with sublime goals, interesting tactical concepts and inevitable controversy. With that win and a double over Barcelona, Real Madrid are now firmly back in the race for the title. Their Catalan rivals, on the other hand, will now have to depend on others to falter if they are to sit back on the Spanish throne.

We’re in for a fiery finale of this season’s La Liga.