The 2019 MLS Cup Playoffs are finally here. 14 teams still have a shot at lifting the coveted MLS Cup, including defending champions Atlanta United. LAFC and NYC FC have both secured byes to their respective conference semi-finals, leaving 12 teams to duke it out for a spot of their own in the first round. This MLS tactical analysis will preview the match between Seattle Sounders and FC Dallas.

Seattle Sounders finished second in the Western Conference, making them favourites heading into the match against FC Dallas who clinched the seventh, and last, Western playoffs spot. Both team’s tactics have helped them finish a playoffs spot, but playoff football can be a completely different game to league play. Find out our predictions in this MLS tactical preview.

Seattle Sounders injuries: Will Bruin (Out with an ACL tear) // Victor Rodríguez (Doubtful)

Generally, FC Dallas look much more comfortable defending against teams who sustain possession. On the transition, Luchi Gonzalez’s team can get caught out with balls over the top into space. Naturally, FC Dallas prefer defending with more players behind the ball, resulting in their regular use of a low block defensive system.

The Sounders can be patient, switching the ball from one side of the field to another in an attempt to open up the opposition. We will explore Seattle’s attacking width in the next section of this analysis.

I have a strong feeling that this game will be won or lost with FC Dallas’ ability to close down Seattle Sounders’ wide attackers. In the below image, we can see FC Dallas’ shape when defending a team who possesses the ball in wide areas. The game was FC Dallas and Seattle Sounders’ first meeting of the season.

When Seattle Sounders attacked down the line, Dallas committed three defenders to close down the attack. Ryan Hollingshead was able to anticipate the pass intended for the overlapping full-back, Brad Smith. Edwin Gyasi and Jacori Hayes were able to prevent Handwalla Bawalla from penetrating on the dribble. 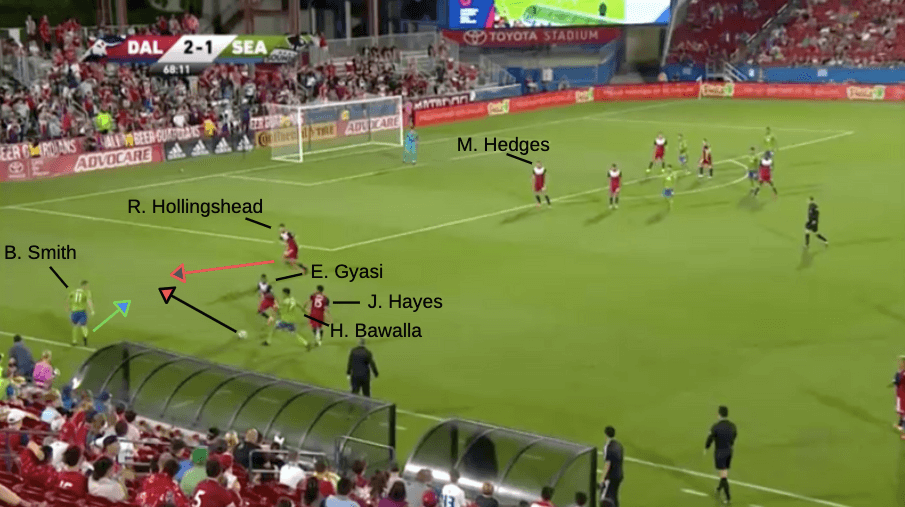 The image shows how FC Dallas are able to quickly close down wide players to create a defensive overload. This makes it difficult for opposing players to get into wide players unopposed, or beat the pressing defenders on the dribble.

However, if that press is broken and opposition players can break into deep wide areas, FC Dallas can be left exposed in the box. In the above image is a perfect example of this. When Ryan Hollingshead drifts across to help provide defensive support in the wide area, he creates lots of separation between him and centre-back Matt Hedges. Had Smith beaten Hollingshead to the ball and beaten him on the dribble, Seattle would have found themselves in a 5v5 attacking situation. Players like Jordan Morris, if given similar opportunities, will punish the Dallas backline.

Width has been a big part of Brian Schmetzer’s attacking plan this season. The likes of Jordan Morris have the speed and technical ability to breaking lines on the dribble. Morris can play anywhere in the front line and has 10 goals to his name this season. With six assists, he has shown his ability to score goals and set them up too. He will be an asset to Seattle Sounders as they attempt to break down FC Dallas’ defensive low block.

On the other side of the attacking lineup, Seattle have turned to different players throughout the season. More recently, however, Joevin Jones has been a regular starter. Jones can play on both sides of the attack, providing Schmetzer with an opportunity to play Morris off the left or right.

But unlike Morris, who likes to dribble at defenders, Jones is a player who prefers to whip crosses into the box from wide areas. This diversity gives the Sounders multiple attacking options. The quick closing down from FC Dallas could prevent the likes of Jones from putting in crosses, but could be ideal for Morris, who is more than capable of taking on multiple opponents. As mentioned in the above section, the battle between Jordan Morris and FC Dallas’ fullbacks could largely impact the outcome of this matchup.

Ironically, the area in which Seattle Sounders find success offensively can be the same area that causes them vulnerabilities defensively. While it may not always result in a goal, Seattle Sounders have a bad habit of allowing attacking opposition the chance to win free balls in the penalty area.

We can see a perfect example of this poor marking in the penalty area the last time Seattle met FC Dallas in the league. An unmarked Michael Barrios was able to freely run onto a cross from Paxton Pomykal. Barrios was unable to convert the chance but had he been more clinical, it could have been the game’s winning, and only, goal. 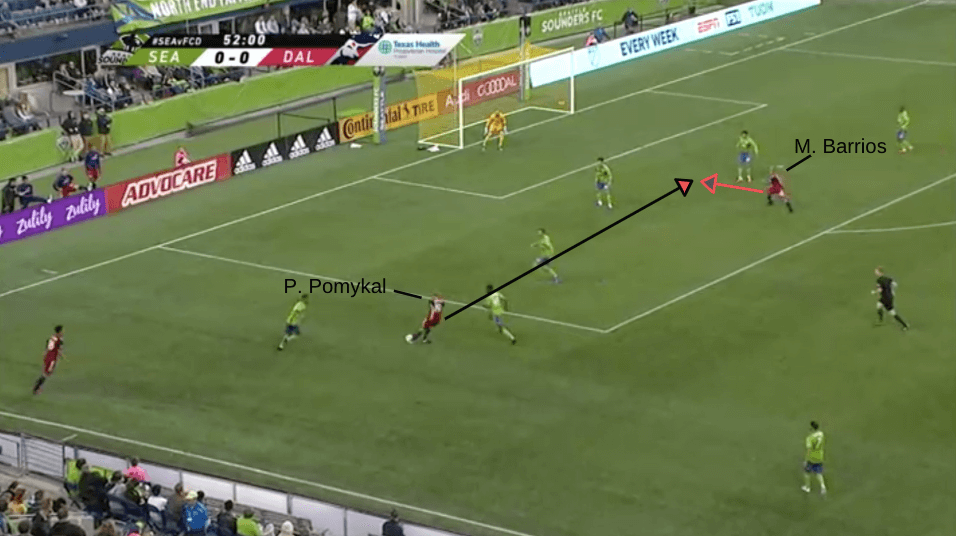 In fact, a majority of Seattle’s goals conceded in the last few months have come from wide areas. When committing players forward, Seattle Sounders leave themselves exposed in these wide areas. This leaves space for opposition teams to exploit with quick transitional play.

In the following image, we can see how Seattle were caught out after leaving themselves exposed in wide areas. This manoeuvre was the action the preceded the chance above during their last match against Dallas. Brandon Servania’s run into the area to receive the pass pulled Jordy Delem from his central area. Paxton Pomykal was able to make a run into the vacated space and receive a return pass from Servania. This opportunity presented itself because Dallas were able to take advantage of the space Seattle left unoccupied behind their fullback. 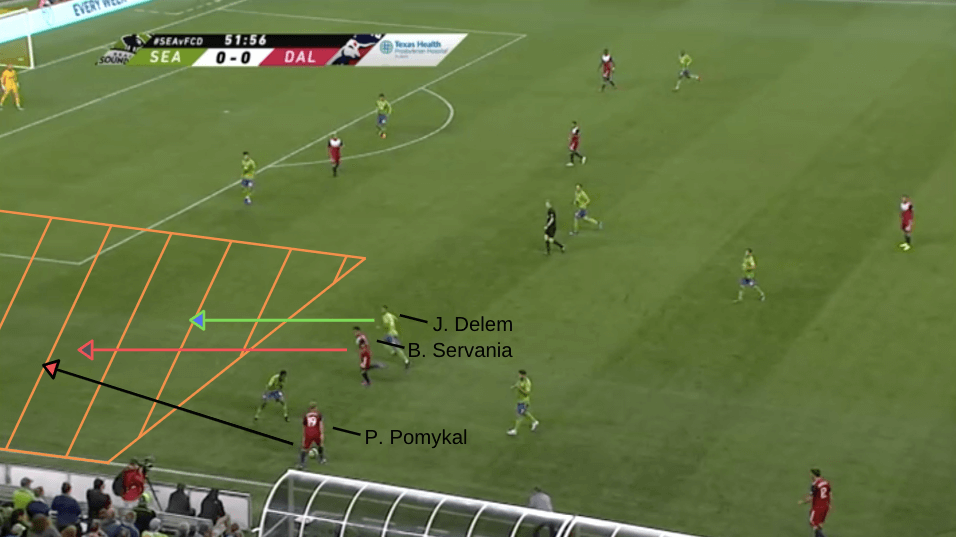 The big question will be whether or not FC Dallas can capitalise on this or not. The team have shown their ability to score from crosses this season, especially from corners delivered by Michael Barrios. Crosses from balls delivered from the touchline are not FC Dallas’ most frequent scoring technique though. They can attack much narrower, and like to cut the ball back into the box when in the halfspace.

We can see an example of FC Dallas cutting the ball back into the box in their 6-0 smashing of Sporting KC during their last regular-season game. Santiago Mosquera cut the ball back across the face of goal for Matt Hedges to tap in at the far post. 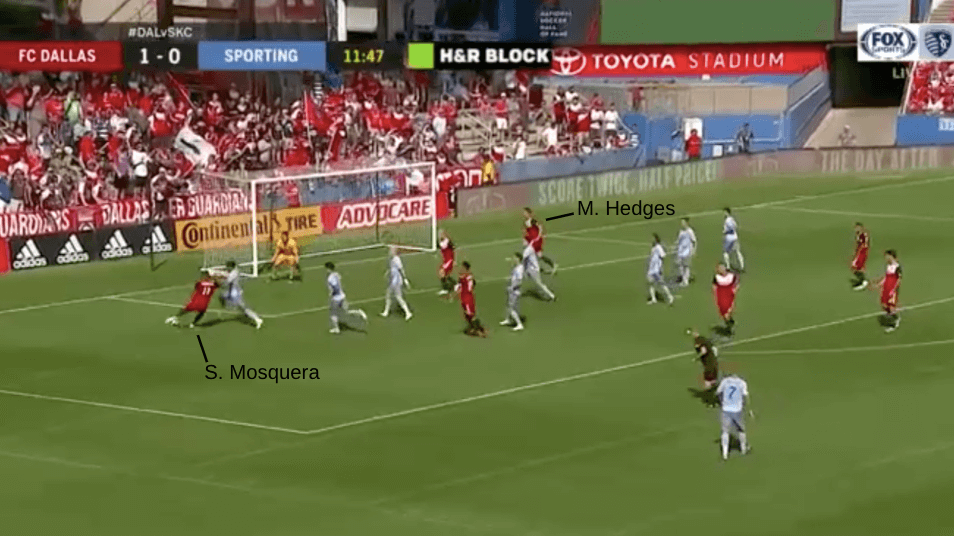 The last time these two teams met in the league, the game finished in a goalless draw. With that being said, however, this playoff match could easily be a goal-fest. Both teams have shown the ability to score multiple goals in games and have shown vulnerabilities defensively.

Despite this, I expect the game to be largely controlled by Seattle Sounders, with FC Dallas willing to sit back and defend until they can transition on the counter. The opening stages of the game will largely impact the outcome. An early Seattle goal could open the game right up, while an early FC Dallas could result in them parking the bus.

Patience will be key for the Sounders. They must be willing to possess the ball until they can find the opportune moment to strike. For FC Dallas, the key will be disciplined defending and finishing their chances when they present themselves.

The game is too close to call, but on paper, Seattle Sounders should win this. My gut, however, is telling me that FC Dallas could end up winning the game 1-0.