Rarely has the phrase “a game of two halves” been more appropriate than when looking to describe the 3-3 draw at Olimpico on Saturday. Atalanta were utterly dominant in the first half, leading 3-0 at the break. In the second half, they took their foot off the gas, allowed Lazio to get back into the game and were punished by the home side’s spirited fightback to only draw the game in the end. This tactical analysis will look at Atalanta’s pressing tactics, Alejandro Gómez’s impact in a new deeper role, and Simone Inzaghi’s second-half changes which underpinned their fightback. 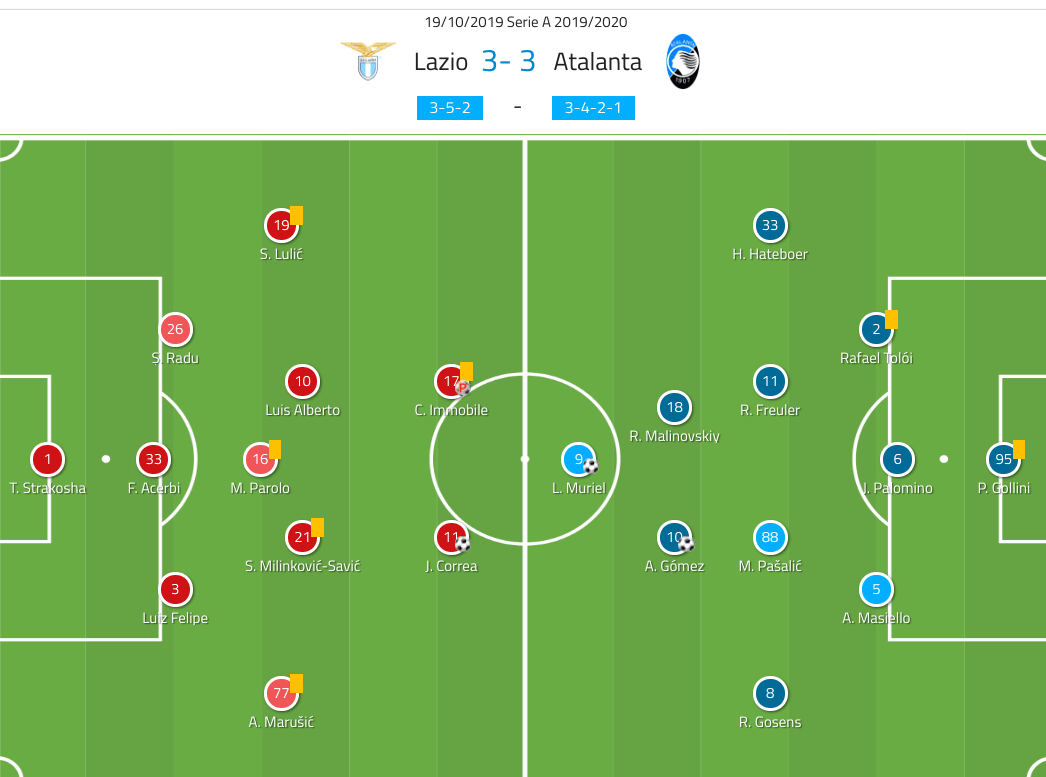 Inzaghi did not surprise with his selection, it was the usual 3-5-2 and no real changes in the starting eleven. That meant a strong central midfield trio of Marco Parolo, Luis Alberto and Sergej Milinković-Savić supporting the front-two of Joaquín Correa and Ciro Immobile, who went into this game with seven goals in the first seven games.

Gian Piero Gasperini produced more of a surprise. Not in terms of personnel, other than Duván Zapata and Josip Iličić missing out and being replaced by Luis Muriel and Ruslan Malinovskiy respectively, but specifically in the role played by Alejandro Gómez. The diminutive creator was deployed in central midfield, with Mario Pašalić instead playing the more advanced role. This decision had a huge effect on Atalanta’s performance, as we will see below.

As always, Atalanta pressed in a very aggressive, collective man-orientated manner. Lazio’s back-three provided a good platform for the front-three to start their pressing, while Gómez pushed up from central midfield to mark Parolo. Remo Freuler was tasked with marking Luis Alberto, which left Milinković-Savić alone behind Gómez. Atalanta solved this by having the left-sided centre-back, Andrea Masiello, step into midfield whenever the ball approached the Serbian. We can see the initial pressing line of Atalanta below. 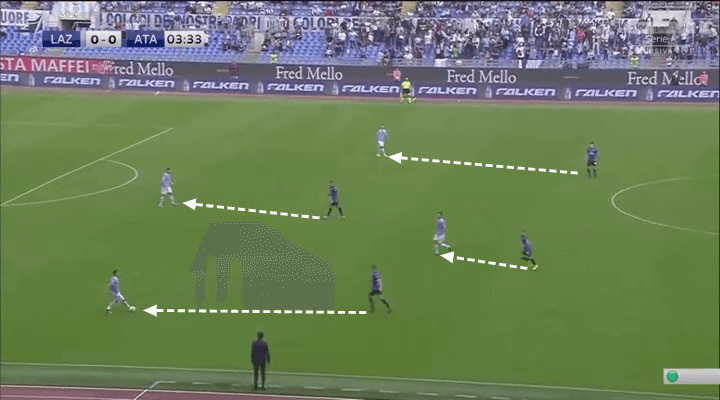 Lazio should have been prepared for this but still, they struggled badly against the intense pressing of the visitors. For long spells in the first half, Lazio could not make it out of their own half with any sort of coordinated play and were instead forced to go long. This is obviously exactly what Atalanta wants, and the back-three dealt with Immobile and Correa easily in the aerial duels. The image below highlights the issue Lazio’s defenders ran into. As soon as Luiz Felipe receives the ball, he has Pašalić sprinting towards him. Parolo and Francesco Acerbi, his only passing options, are marked and there is no help from the wing-back (who is also marked by Atalanta’s) or from Milinković-Savić. Repeatedly, he was forced long, or to go back to Thomas Strakosha, who was then forced to go long. 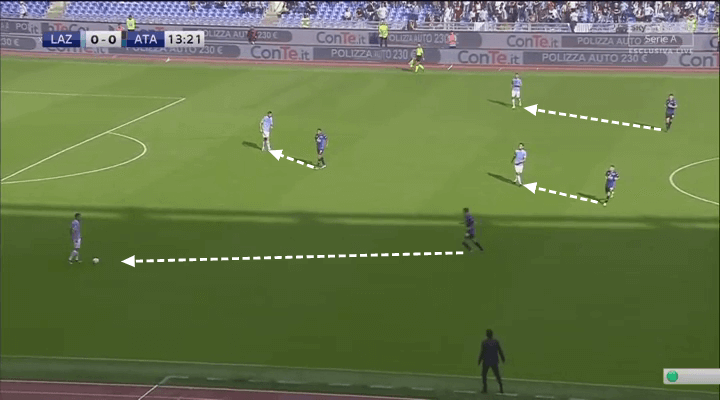 Lazio’s build-up struggles were punished heavily when Atalanta scored their third goal of the afternoon. We can see this in the image below. Luis Alberto played a pass towards one of his strikers, but Rafael Tolói steps in and breaks the pass. He then plays it forward to Muriel, who lets the ball run on into the path of Gómez. The Argentine attacker is then through on goal and makes no mistake. It was aggressive, vertical and ruthless, and highlighted the difference between the two sides in the first half as Atalanta romped to a three-goal lead. 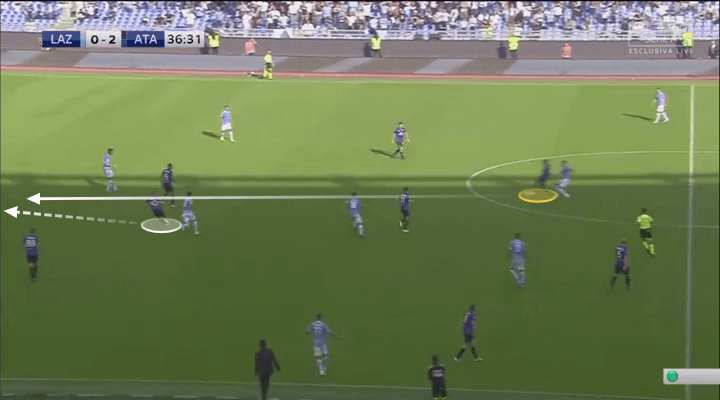 Throughout Gasperini’s magnificent spell at Atalanta, Alejandro Gómez has been the most instrumental player. He is the one that makes them tick, he is the one who creates almost everything in the final third and he is the one who largely runs this team. Interestingly, Gasperini seems to want Gómez to run the side from a slightly deeper position in some games, and he positioned him in central midfield at Lazio. This meant Pašalić moved into Gómez normal inside-left forward position. Atalanta’s attacking setup can be seen below.

Using Gómez rather than Pašalić or Marten De Roon in midfield gave Atalanta a much-improved possession play. Additionally, Gómez sublime 1 vs 1 ability gave the visitors an extra edge when looking to build attacks, as the playmaker could dribble out of tight situations or simply drive into empty spaces to progress the ball. Most importantly though, the positional change meant that their best player spent more time on the ball.

In the image below, we can see one of the benefits Atalanta gained from having their number 10 in a deeper role. After receiving the ball from the left wing, Gómez drops his shoulder and drives into the empty space in midfield. Actions like this one draw attention from opposition midfielders, and thereby opening gaps for the attackers to exploit. 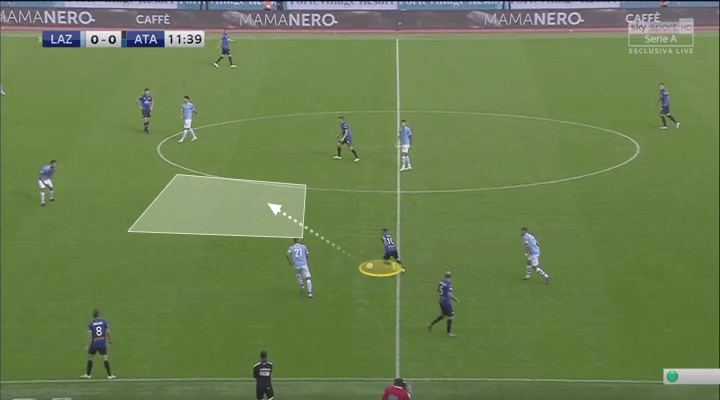 Below is another example. Gómez positions himself behind Lazio’s front-two and out of reach for the midfield three of Lazio. Masiello threads the ball into him, and Gómez then instantly turns forward and drives with the ball to attract opponents towards himself and away from others. 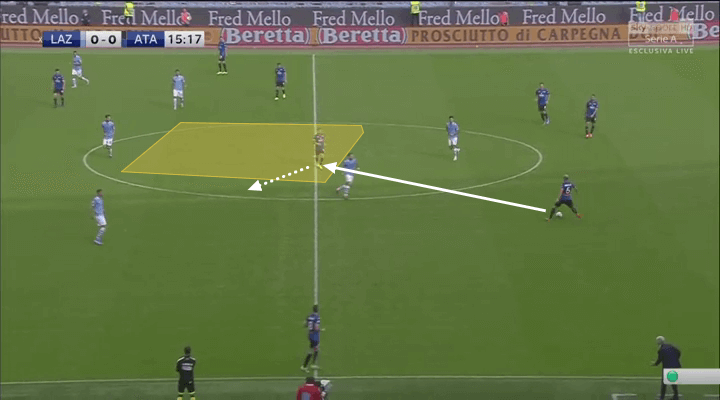 With Gómez pulling the strings in deeper areas, he was also able to spend more time on the ball faced forward. Given his passing ability, vision and creativity, this was an obvious issue for Lazio. The image below highlights such an occasion as Gómez (yellow) faces the Lazio team and has plenty of time on the ball. He goes on to thread a pass through to Muriel. 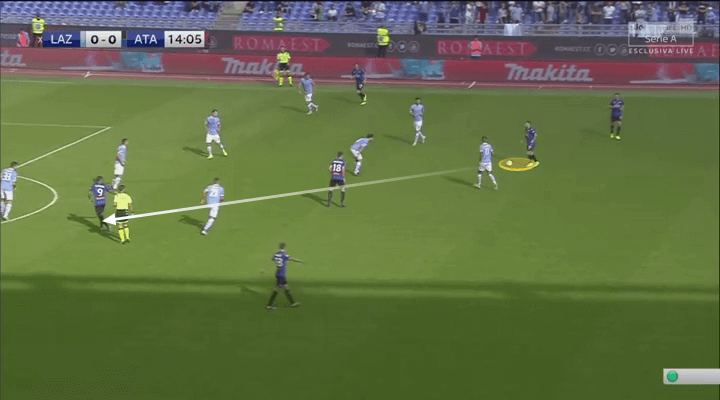 The positional change with Pašalić also saw the Croatian thrive. Of course, he has spent time in central midfield and as an attacking midfielder under Gasperini, so it was not entirely new to him. His main contribution to this team is his running off the ball, as he is superb at timing runs into the box. Starting as the inside-left forward, he caused Lazio problems throughout his 60 minutes on the pitch. The image below highlights the type of run he excels at. Malinovskiy is on the ball and spots the Croatian’s run. The Ukrainian then threads the ball through and Pašalić produces a shot on target. Notice also how Gómez has popped up in such a high position, and the run of Muriel to the opposite side to open up the space for Gómez and Pašalić to attack, which highlights Atalanta’s fluid attacking play. 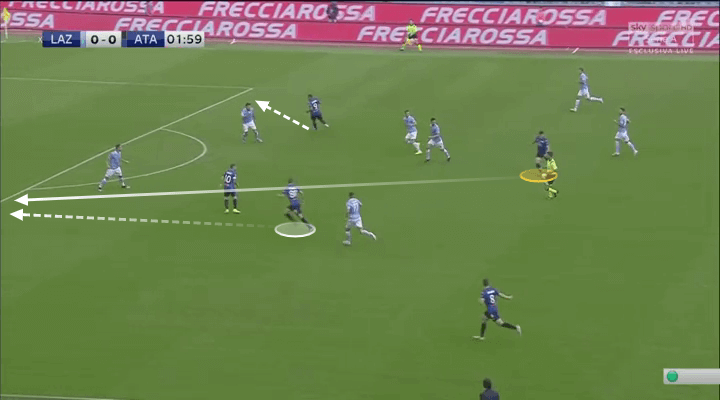 The image below is another example. On this occasion, Muriel has just received the ball and plays it on into the path of Pašalić in behind the defence. 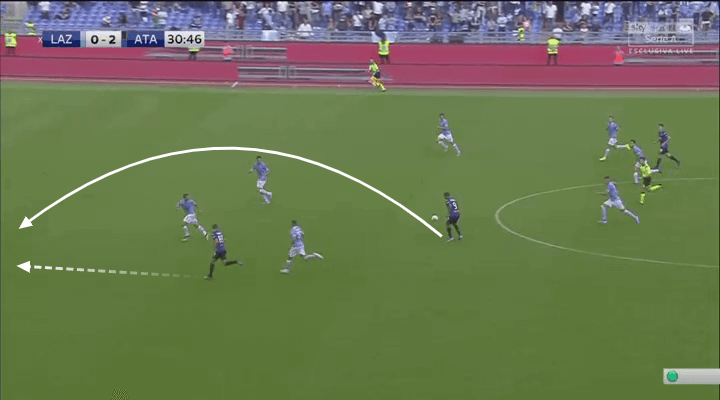 The experiment with Gómez in midfield was extremely encouraging and made Atalanta even better in attack. Given it also suited Pašalić, this is something Gasperini should continue to deploy in games where he feels Atalanta will likely be the dominant side.

As good as Atalanta were in the first half, Lazio were still toothless, laboured and devoid of ideas. I have already discussed their build-up struggles, and they were even worse defensively as they became easily stretched, had no energy, and left oceans of space for the visitors to attack. The image below highlights this perfectly. The ball is with Hateboer on Atalanta’s right wing. He plays the ball into Malinovskiy, who is all alone in a huge space behind Lazio’s midfield line with all three Lazio midfielders caught out of position. Incredibly, this is just 82 seconds into the game. 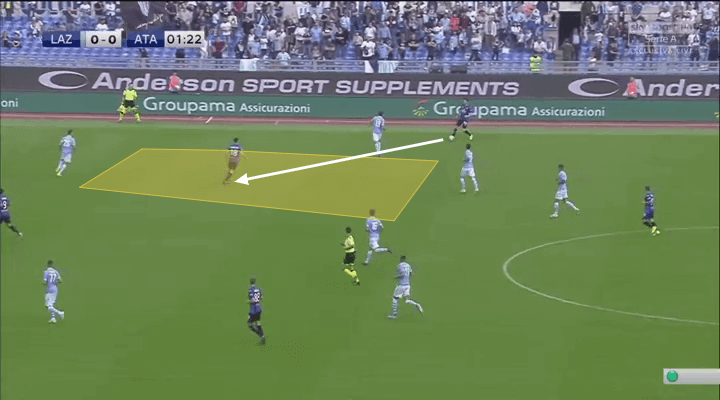 Fortunately, Inzaghi made some clever changes at the break. Danilo Cataldi and Patric came on to replace Parolo and Marušić. Both substitutes injected energy and fight into the side. Lazio also began to press higher and with more energy. We can see this in the image below with the front-two pressing the goalkeeper Pierluigi Gollini while two midfielders are waiting to pounce on the next pass. As it happens, Gollini plays it to Hateboer who then goes on to lose the ball under pressure. 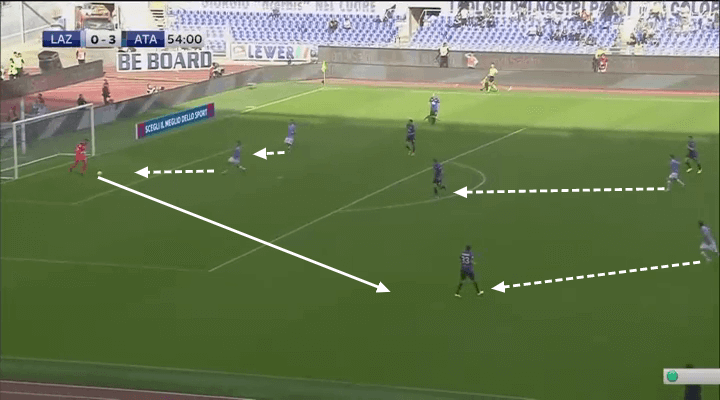 Inzaghi made no real noteworthy structural changes at the break so Lazio’s improvement were mainly about energy and pride after such a poor half. They were helped by Atalanta’s lacklustre second-half showing though. The visitors looked complacent and spurned plenty of good counter-attacking opportunities to put the game to bed at 0-3 and at 2-3. What must irritate Gasperini most, however, is the way they defended without the intensity we saw in the first half.

The following three images are good examples of this. In the first image below, Cataldi plays the ball into Milinković-Savić, who is granted so much space to turn that you would be excused for thinking Lazio were playing a different club after the break. 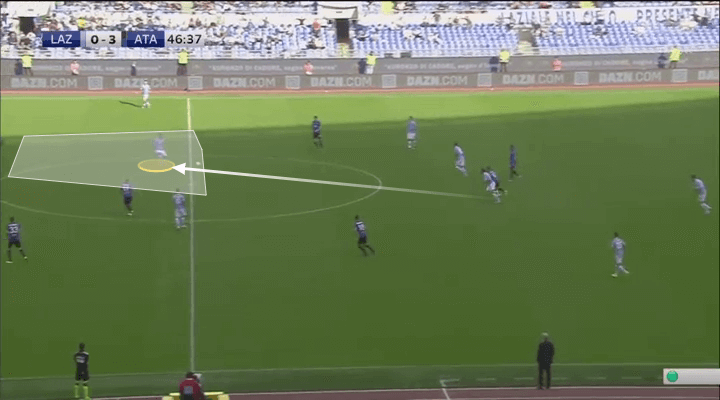 In the next example, Acerbi plays a pass through Atalanta’s team to Correa, who can turn without any Atalanta player anywhere near him. 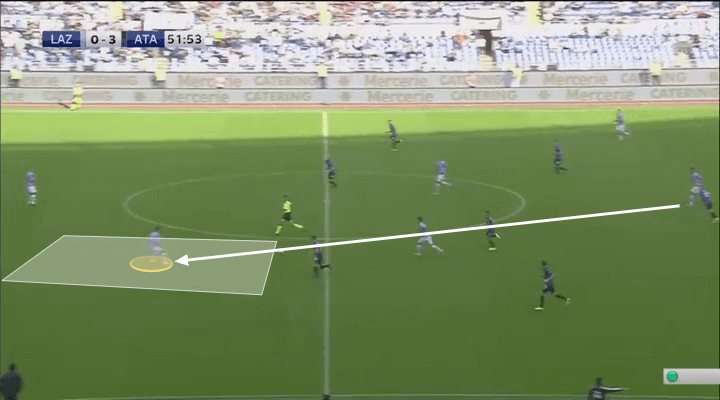 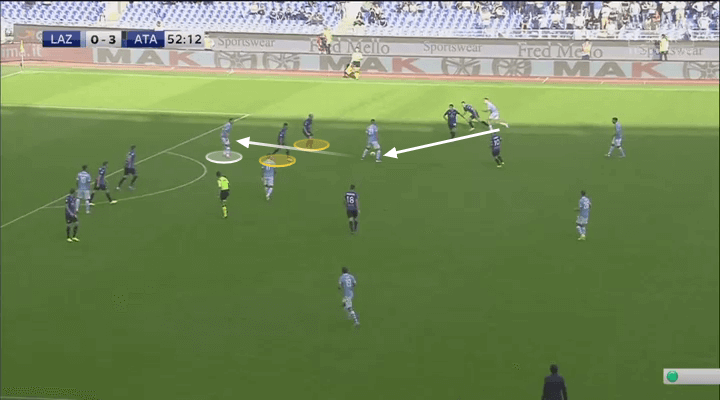 Also, Atalanta’s passing was sloppy after the break and they struggled to keep hold of the ball compared to what they had done in the first half. This allowed Lazio to hit them on the break on more occasions, and then the pace of Immobile and Correa proved devastating. Lazio realised this, and started to play the ball in behind Atalanta’s defence earlier. One of those situations is highlighted below. Atalanta have just lost the ball in midfield and Lazio break. Patric plays the ball early into the run of Immobile, who then goes on to win the penalty that started the comeback. 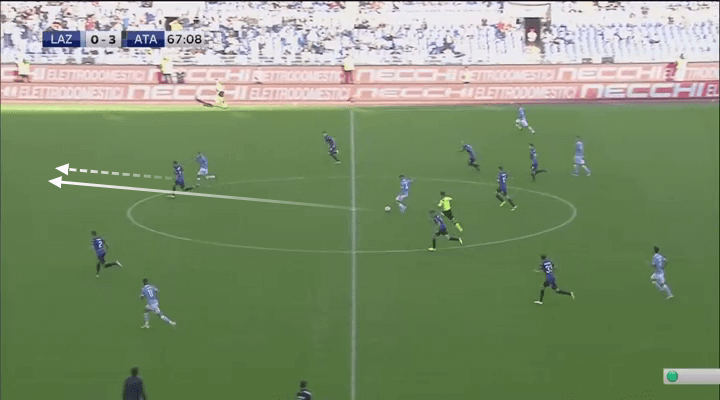 Ultimately, Lazio should be given credit for their spirit after the break, but Atalanta allowed them to get back into this game when there really was no need for them to do so.

As this analysis has shown, Atalanta will be kicking themselves for their inability to earn three points in a game they were so dominant in. Lazio will be buoyed by their spirited second-half comeback but also worried by how poor they were in the first 45. For all neutral watchers, we are happy to have been treated to a true classic of a game from the Serie A.