While both teams had already clinched a playoff spot before MLS Decision Day, Seattle Sounders vs Minnesota United was a big match. The winner would not only guarantee a home playoff game but also finish second in the MLS Western Conference. With LAFC earning a bye from finishing first, the second-place team would earn the highest seed spot in the quarter-finals, guaranteeing a route to the semi-finals without facing Supporters’ Shield winners LAFC.

On paper, both teams looked fairly even throughout the game, but a header from Román Torres was enough to secure all three points for the Seattle Sounders. Find out exactly how the Sounders managed to overcome Minnesota United in this tactical analysis.

Brian Schmetzer only made two changes to his side that beat San Jose in the penultimate match week of the MLS regular season. Román Torres came back into the lineup after Xavier Arreaga received a red card against San Jose. This meant that Kim Kee-hee remained in the centre of defence for the Sounders. Nicolás Lodeiro also made his way into the lineup after replacing Víctor Rodríguez. The side lined up in a 4-2-3-1.

Adrian Heath made four changes to his side that squeezed a point out of their match against LAFC. Chase Gasper returned to the lineup after being sidelined because of suspension while Ángelo Rodríguez, Ethan Finlay and Osvaldo Alonso made their way into the starting XI, replacing Mason Toye, Robin Lod and Lawrence Olum respectively. Minnesota United lined up in a 4-1-4-1 formation. 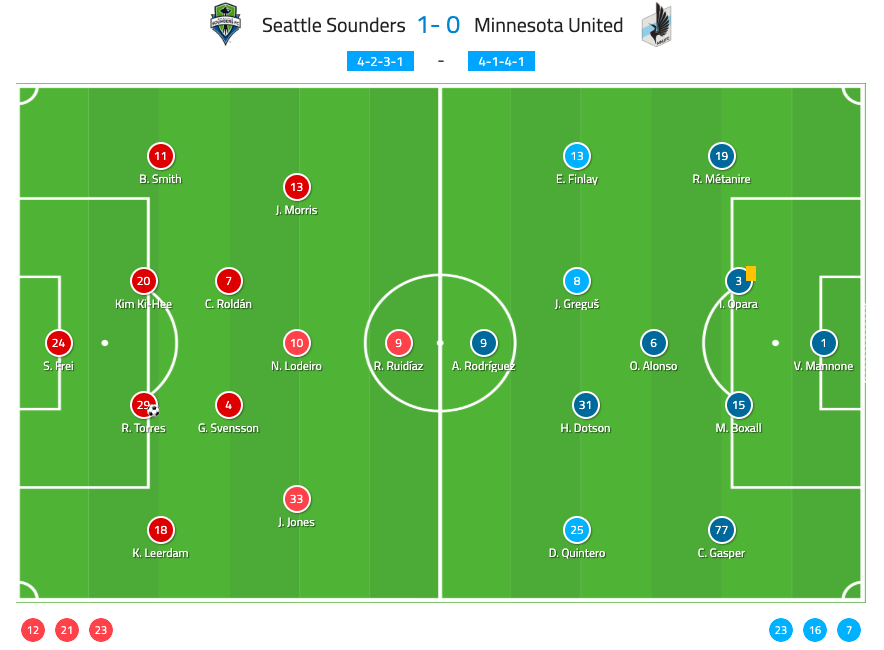 Seattle Sounders down the right

Early in the match it became clear that Seattle’s favoured point of attack was down the flanks. Jordan Morris and Joevin Jones were utilised early in the match, with Seattle taking advantage of Minnesota United’s high pressing fullbacks. The spaces in behind these areas were exploited multiple times in the match’s opening minutes.

But as the match began to mature, Seattle Sounder’s began favouring the right-hand side as their primary point of attack. The width provided by Jones allowed right-back Kelvin Leerdam to take a more central position in the middle of the field. We can see just how central the right-back positioned himself in the below image. 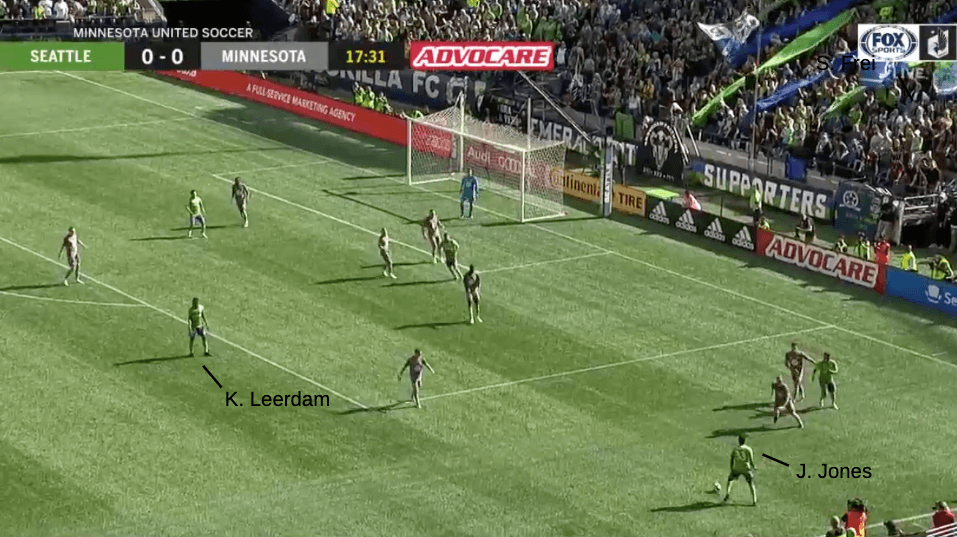 The right side is where Seattle looked most dangerous, whipping crosses into the back post. Later in this analysis, we will showcase how Minnesota United’s poor marking on crosses left them exposed from wide areas, specifically during Seattle Sounder’s goal.

One of the main reasons for Seattle’s sudden switch to attack solely down the right may have been from Minnesota’s compactness in defence. On the left side, Jordan Morris was keen to dribble into the centre of the field with the ball at this feet. Despite his technical proficiency in dribbling past defenders, Morris was constantly met with limited space the further he came inside.

On the contrary, Jones’ willingness to receive the ball out wide forced Minnesota to step to him in possession. This created holes in their defence which were exploited by Seattle Sounder’s central players.

If a direct ball into the middle wasn’t on, Jones was able to play the ball back to his teammates who were able to exploit these spaces from a different angle. We can see an example of this in the image below. As Minnesota United’s left-back Chase Gasper steps out to mark Jones, the winger plays the ball back into the middle of the field. He then makes a run into the space he created which Nicolás Lodeiro spots before making the pass. 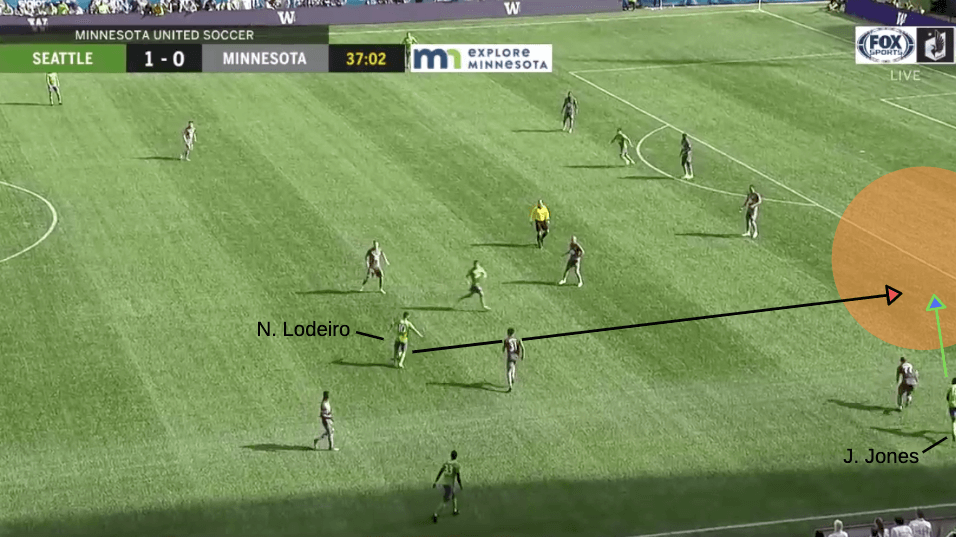 By spreading Minnesota’s defenders out of their central zones, Seattle created problems for United defensively. We now look at how Minnesota United were unsuccessful at marking Seattle’s attackers in the box when crosses were played in.

While Minnesota seemed to have numerical superiority in the 18 yard box, their inability to effectively mark Seattle’s players left them vulnerable. This was especially true for the area at the back post. As we discussed in the previous section of this analysis, Seattle Sounders stretched Minnesota’s backline by occupying the ball on the right touchline. Below we can see an example of how Minnesota United chose to mark areas of low risk while leaving areas of high risk inadequately defended. 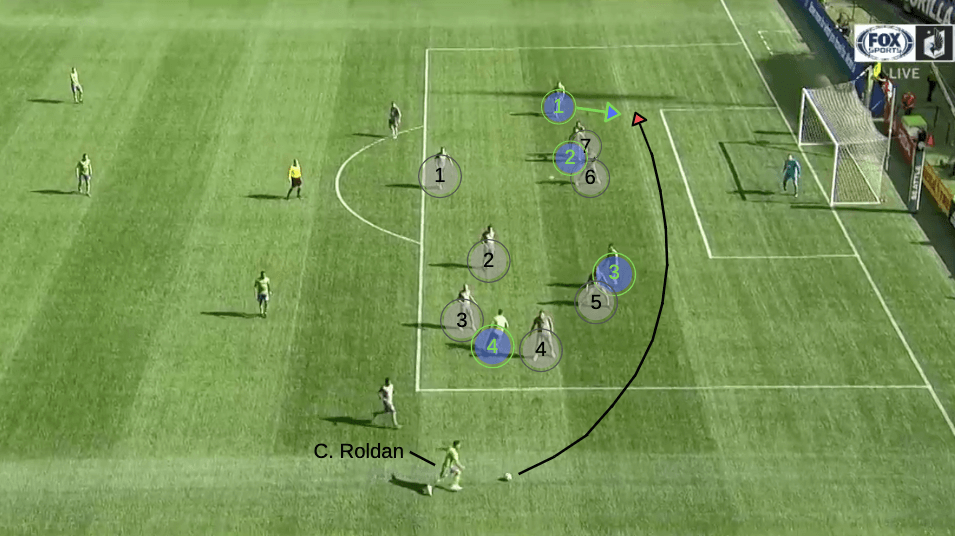 In the image above we can see seven Minnesota United players in their penalty area, with only four Seattle Sounder’s players present in the box. While Minnesota have positioned themselves well to prevent players from dribbling into the area, they have left themselves exposed to a 2v2 at the back post.

Because Seattle Sounders have proficient dribblers like Jordan Morris who can play on both sides of the field, it makes sense why they would want to overload the spaces that wide players could dribble into. However, the inability to effectively create numerical superiority at the back post left them vulnerable.

Seattle’s eventual goal came from a back-post header. In this instance, Minnesota’s defenders were still central after defending a corner, but showcased their inability to mark Seattle’s attackers after a switch of play. As the ball makes its way out to Joevin Jones, Román Torres begins his movement to the back post. Jones is able to play a ball into the back post area, where Torres has a free header to score. 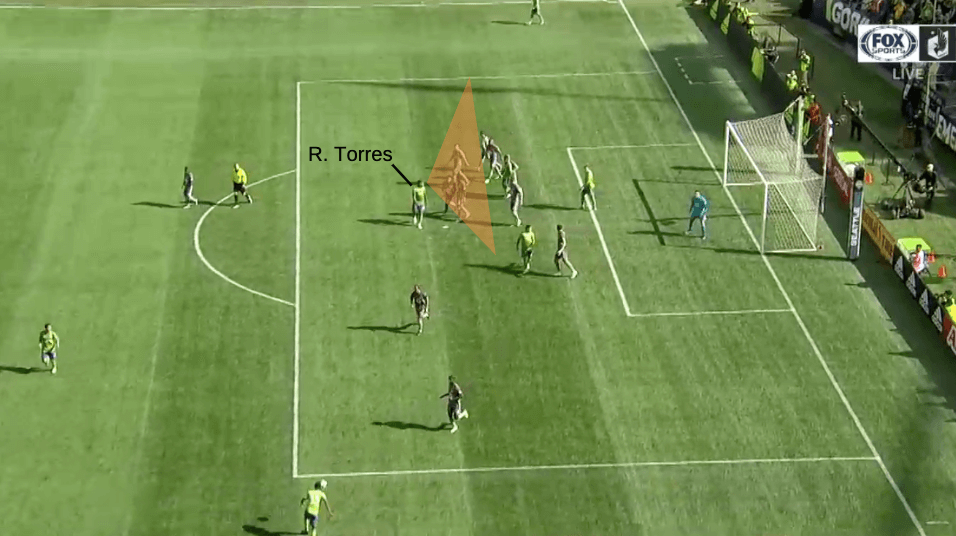 In the above image we see Torres check his shoulder as Minnesota United’s defenders readjust to the new point of attack. Below we see Torres find space back post for a free header. Once again, we see Minnesota’s defenders outnumbering Seattle’s attackers six to four in the area. But past the penalty spot, there are two Minnesota defenders covering four Seattle attackers. 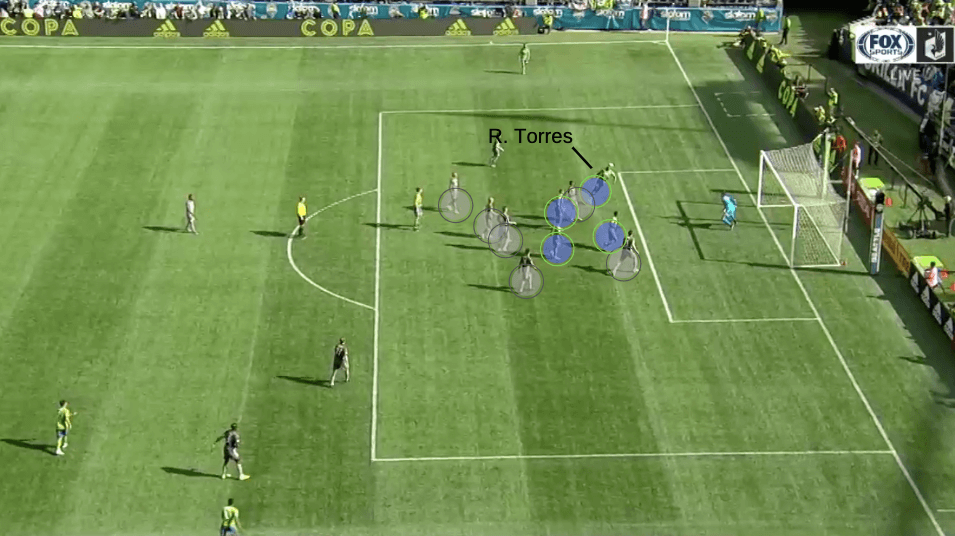 The above image shows Torres check his shoulder as the corner makes its way back post to Jones. Seeing that his marker is not present, he simply jogs to the back post. The confusion of an overhit cross caused the Minnesota defenders to switch from defending from their right to their left. This switch in play, whether it was intended by Seattle or not, provided the Sounders with an opportunity to find dangerous pockets of space inside the box.

When width was created by Seattle’s wide players, depth was created by their two pivots Gustav Svensson and Cristian Roldan. These two holding players were important when it came to Seattle switching the point of attack from one wide area to another.

But their depth not only allowed Seattle to quickly switch the park. It also allowed Nicolás Lodeiro space to operate in the middle of the field. His influence on the game was large, racking up 100 touches on the ball, the most of any other player on the field. He also made the second-highest number of passes in the game with 74, second only to Seattle right back Leerdam with 75, according to WhoScored.com.

But his influence goes deeper than simply having the most number of touches and passes. While his starting position was central, Lodeiro frequently drifted out into the channels to support his wide teammates. His movement into these channels was an important part of dragging out Minnesota’s defenders, as mentioned above.

Off the ball, Lodeiro was brilliant at creating space by moving defenders in central areas as well. While other teammates were in possession, he orchestrated the buildup by providing verbal and visual guidance of passing options. That communication came with a sense of anticipation.

In the following image, we can see Nicolás Lodeiro communicating to Kelvin Leerdam to play the ball backwards. As we can see by the image, Leerdam has other options, including a forward pass to his winger Joevin Jones or a switch across the park to Jordan Morris in space. Leerdam even has the option of playing the ball to Lodeiro centrally who could turn into space. 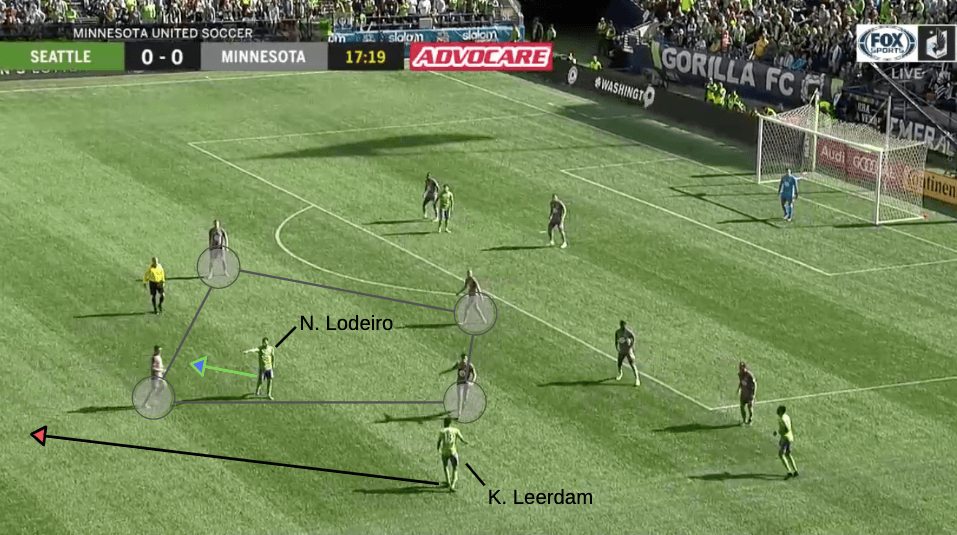 But Leerdam follows Lodeiro’s suggestion and passes the ball back to Cristian Roldan. As the pass is made, Lodeiro drops off into space to receive the ball. This small movement pulls Minnesota’s defenders out from their compact position, creating space in depth. We can see the space that Lodeiro’s movement created between the lines below. 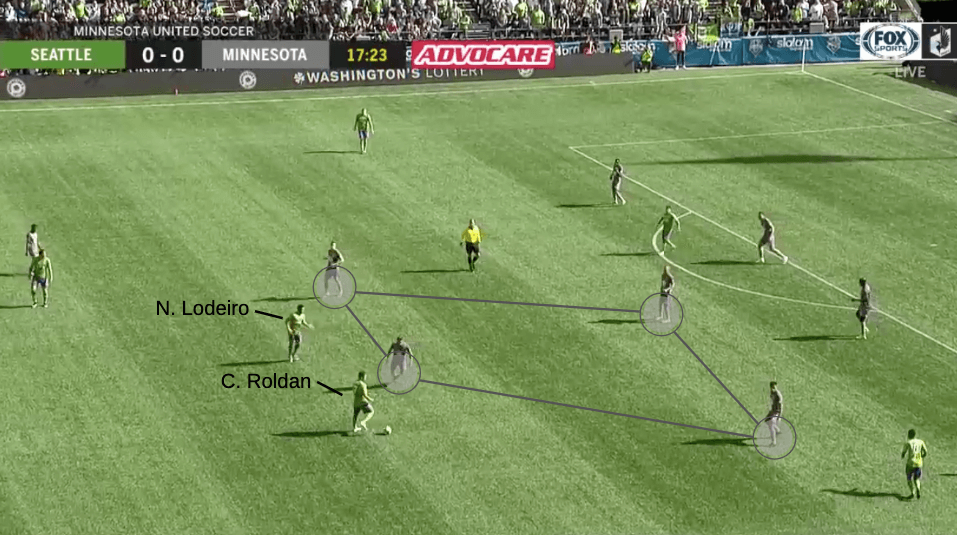 But instead of utilising Lodeiro right away, Roldan plays a direct ball into Joevin Jones who is once again high and wide on the right side of the field. As this pass is made, Lodeiro explodes into the box through the space he created from his off the ball movement. We can see in the image below how much space the backwards pass created in Minnesota’s backline. 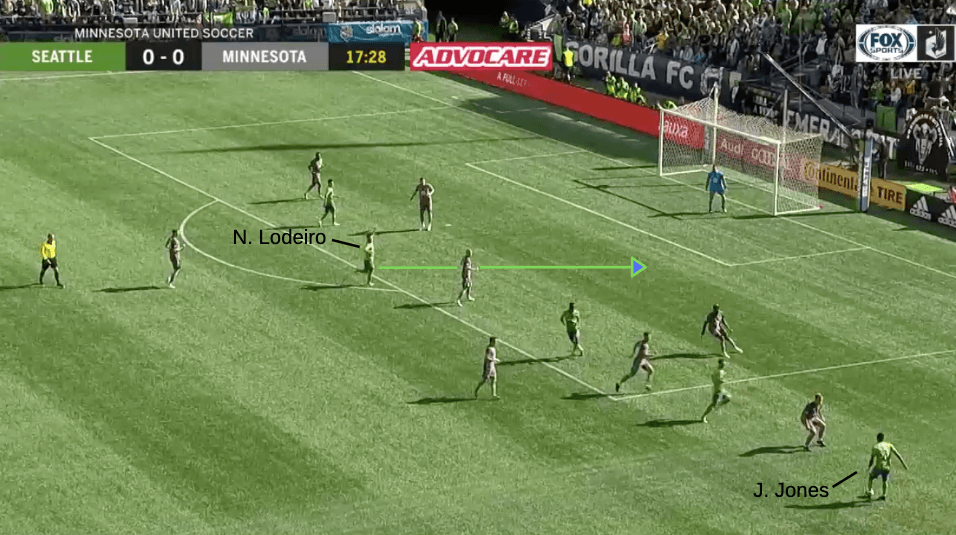 In this instance, nothing came from the chance. Jones utilised Leerdam who was again paying more centrally. The passage of play above perfectly illustrates how Seattle Souders attempted to play during this game. Their ability to move the ball vertically and horizontally to create space was aided by the off the ball movements of their central players. This combination created problems for the Minnesota defenders who struggled to mark their man.

At the end of the day, Brian Schmetzer’s tactics allowed Seattle Sounders to overcome Minnesota United. An LA Galaxy loss means that Minnesota United have still managed to earn a home playoff game where they will face the Galaxy themselves. A win against the Galaxy, though, would place them in a difficult semi-final match against LAFC. Both teams will both be playing in the 2019 MLS playoffs, and you can be sure to find an analysis of each game on Total Football Analysis and Major League Soccer News.