Even though Franck Ribéry’s move to Fiorentina was not particularly one of the bigger bombshells in the past transfer window, the Frenchman immediately showed that he is still an elite player despite being 36 years old. He was even voted Player of The Month for September in Seria A, which just proves his class. Like fine French vine, Ribéry is ageing well.

This is reason enough for us to take a closer look at how Fiorentina coach Vincenzo Montella uses the former Bayern legend with a scout report. This tactical analysis will explain Montella’s approach in implementing Ribéry into Fiorentina’s tactics and bringing out the best out of him.

It seems odd to start the analysis looking at this particular side of the coin. However, there are good reasons for that. Fiorentina’s 5-3-2/3-5-2 formation, which Montella strongly prefers, can be best seen when the opponent is in possession, as Fiorentina are very fluid when they attack themselves. Furthermore, adding the 36-year-old Ribéry into a defensive corset is the true tactical masterpiece Montella created.

Even though the sample size is rather small with only seven games being played so far, Ribéry has only won 38.7% of his duels and was successful with every second dribble only. These figures indicate that he has lost some physical strength due to his age. Thus, it just made sense to use him as one of the two strikers up-front, where he can focus on closing passing lanes. 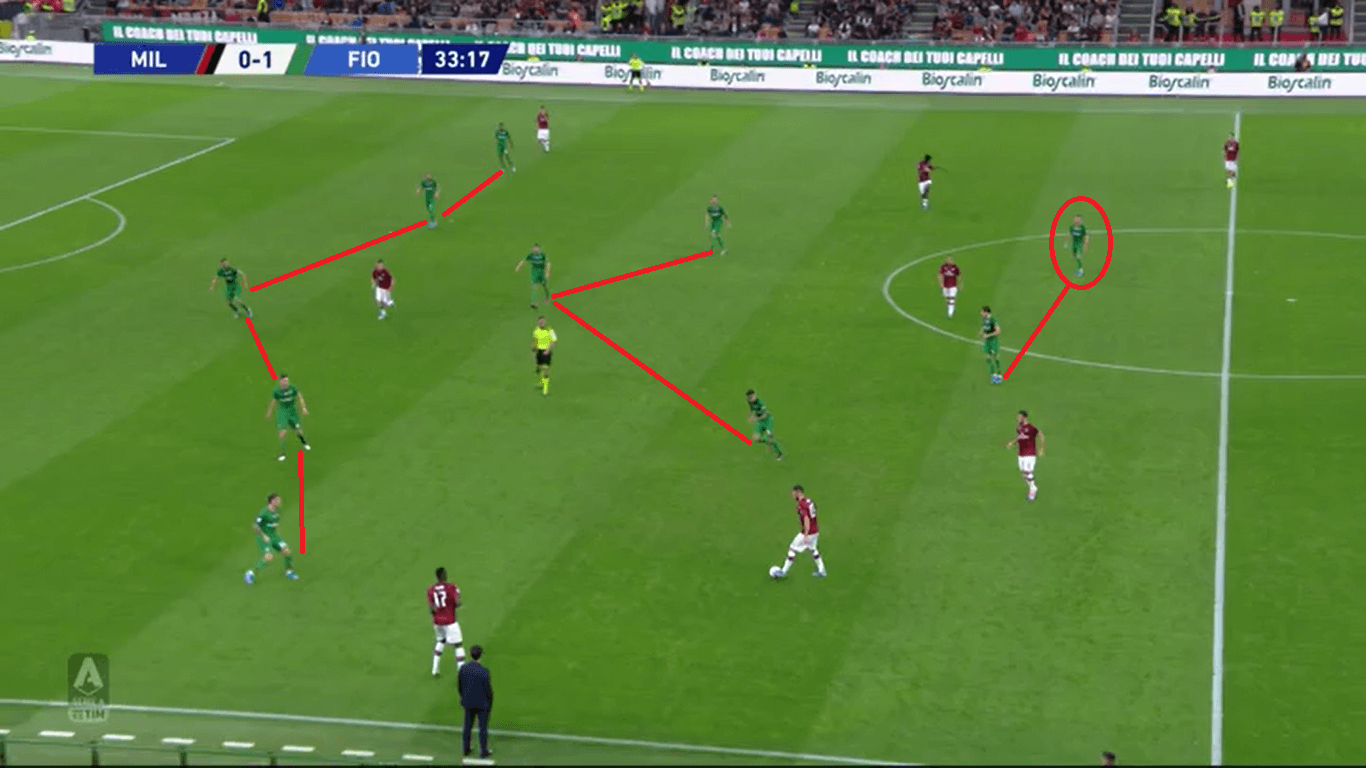 As we can see in the image above, Ribéry and Federico Chiesa are the tow strikers up-front. Both stay tight in the centre. As it is often the case when playing with a back-five, pressuring the opponent’s full-backs is one of the main issues, since a 5-3-2 formation lacks width in higher areas of the pitch.

Montella solves this with the ball-near midfielder moving out, which enables his strikers to focus on the centre. If necessary, Ribéry and Chiesa may also shift to the wing, but mostly, they try to cover the central areas of the pitch. 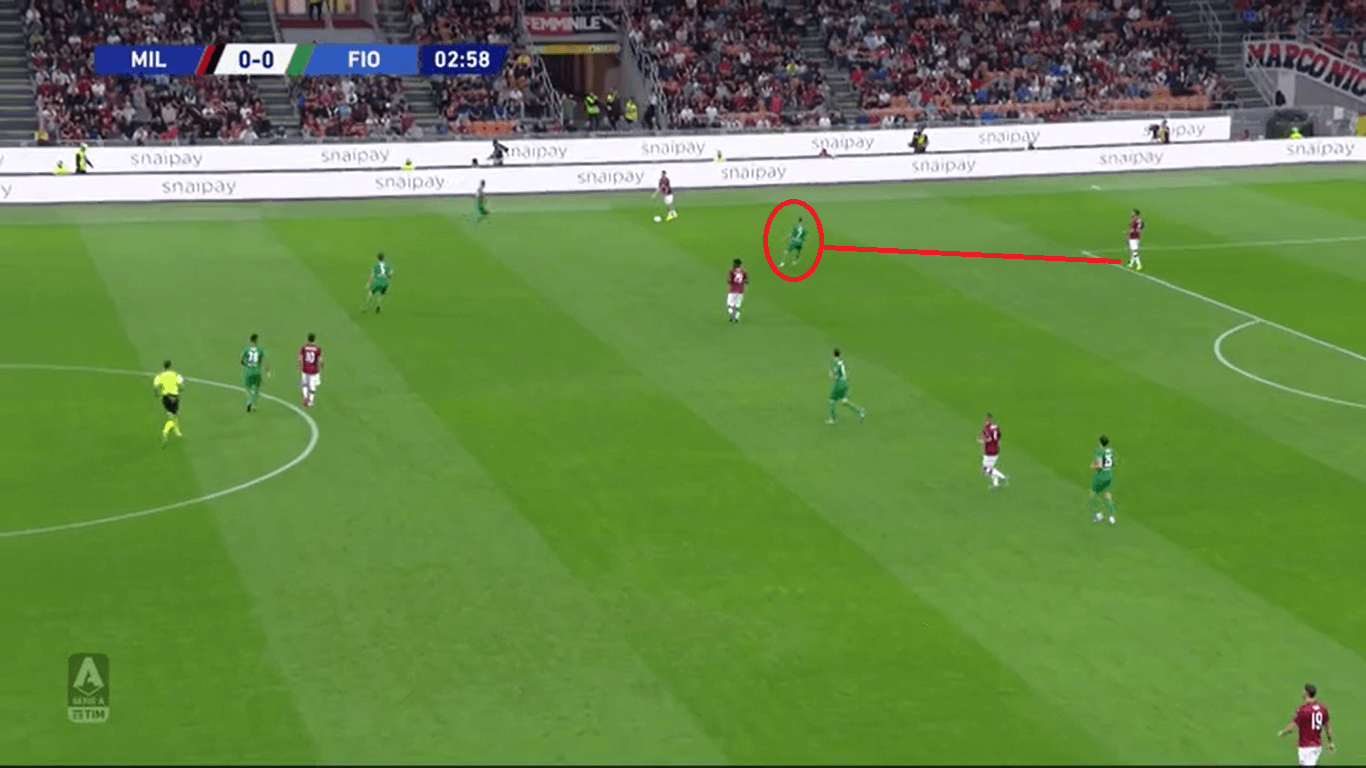 When pressing high, like in the image above, the ball-near wing-back also joins the press, so Ribéry again is able to focus on the centre. He decides to cut the back pass to the centre-back, which is probably not the best decision here. Nonetheless, it is sufficient to maintain a stable defensive set-up without even wasting much energy. This is perhaps the main factor why Ribéry functions so well at Fiorentina. He can preserve his energy for the game-changing moments but also contributes defensively up to a certain point.

Against Juventus, Ribéry also supplied an iconic moment when he tackled Cristiano Ronaldo. Such moments demonstrate his fighting spirit and make the fans love him even more, but the eye-test from all games so far rather suggests that this was partly caused by the importance of that game. Throughout the season, we will most likely see Ribéry conserving his energy defensively.

At Bayern, Jupp Heynckes once stated that the key factor for winning the treble in 2013 were Ribéry and his partner in crime, Arjen Robben, learning how to help the team with their defensive contribution. 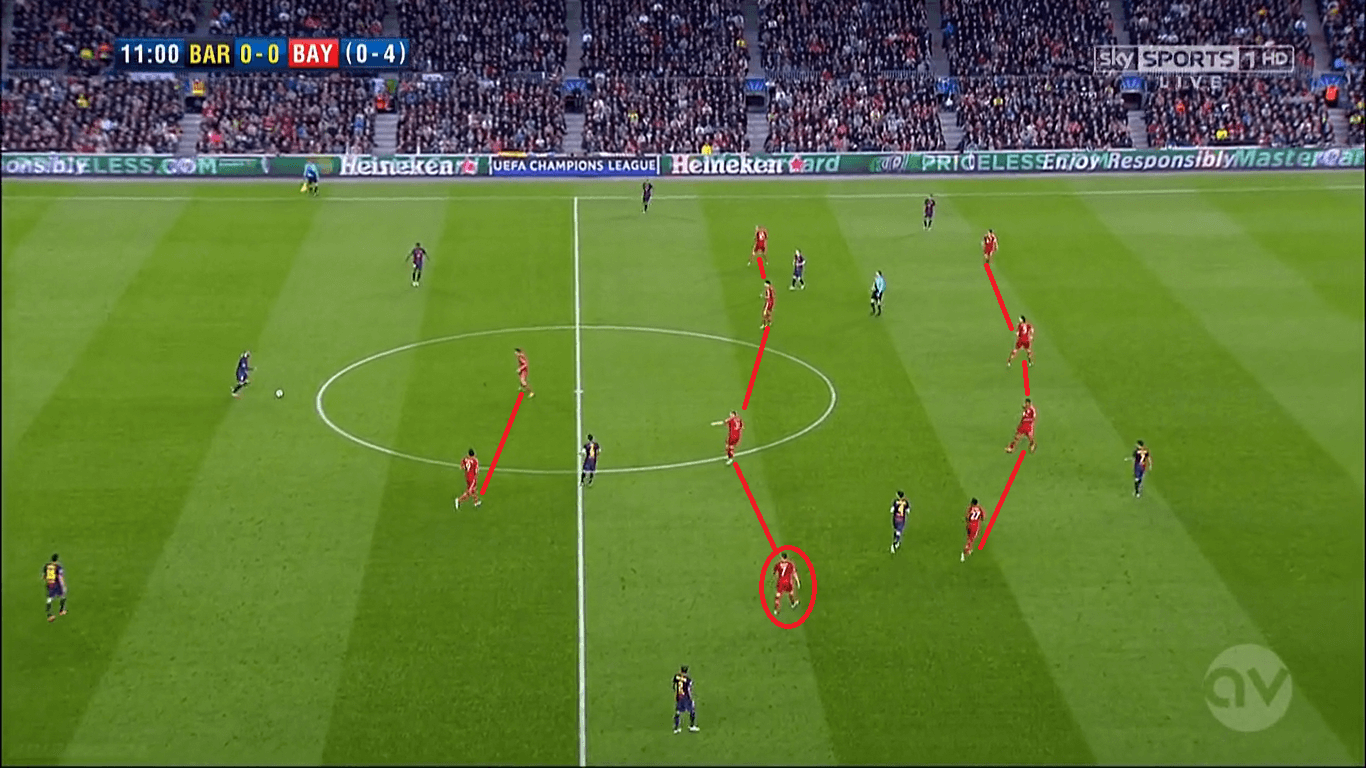 Ribéry took the left-wing position in the midfield line, constantly keeping an eye on one of the most dangerous full-backs of all time, Dani Alves. The fact that he was able to take Alves out of the game is accomplishment enough. However, as we have shown, his role will be somewhat different at Fiorentina.

Offensively, we mentioned that Fiorentina are rather flexible. The fact that both strikers, Ribéry and Chiesa, are natural wingers underlines this. The Frenchmen thus is often found on the left-wing still. 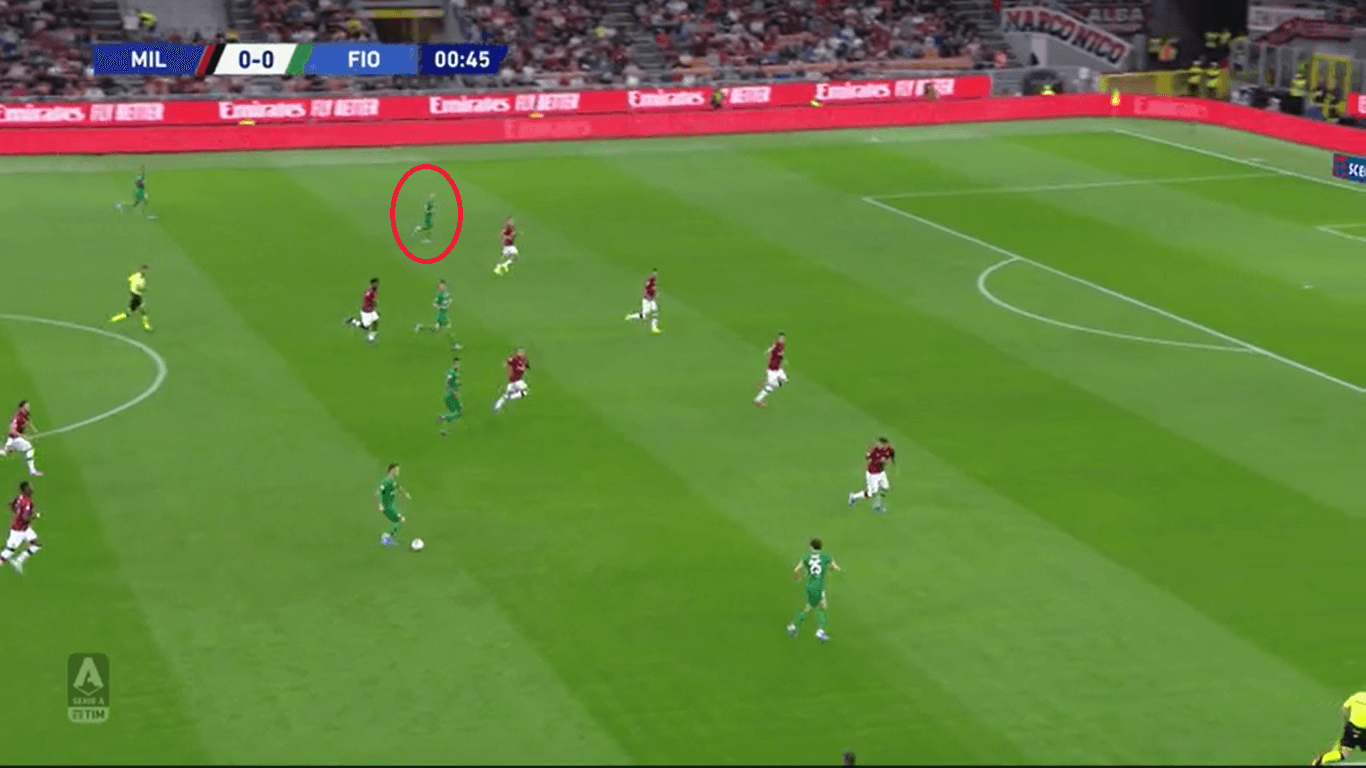 At times, it looks like Fiorentina do not even play with a striker, as Ribéry and Chiesa use the width of the pitch and have a huge distance between them. This may make sense if the midfield three are able to move forward with tempo and occupy that space that the strikers would normally be in. Also, if Fiorentina are able to switch the wing quickly, Ribéry and left wing-back Dalbert could be in a great position to break through. 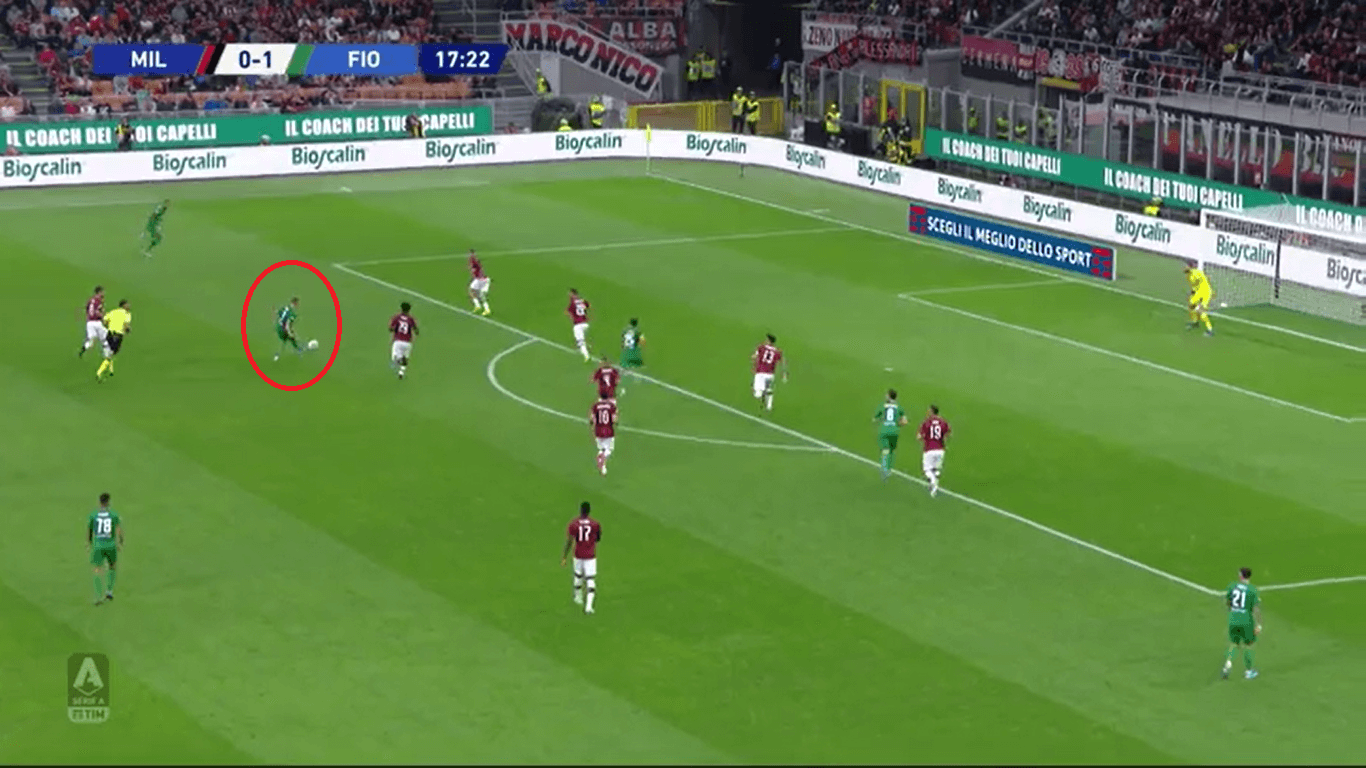 One such example can be seen here. Dalbert overlaps Ribéry and receives the ball being wide open on the wing. Thanks to Ribéry’s strong foot being the right one, he usually has a lot of options operating from the half-space, which makes it very difficult for the defenders to anticipate what will come next.

Instead of passing out to the wing, there is also the option of cutting in and trying to shoot or even the possibility of chipping the ball to Chiesa into the box. This set-up strongly reminds us of Bayern using left-back David Alaba in a similar role overlapping Ribéry, so the Frenchman had a lot of option to continue the play. 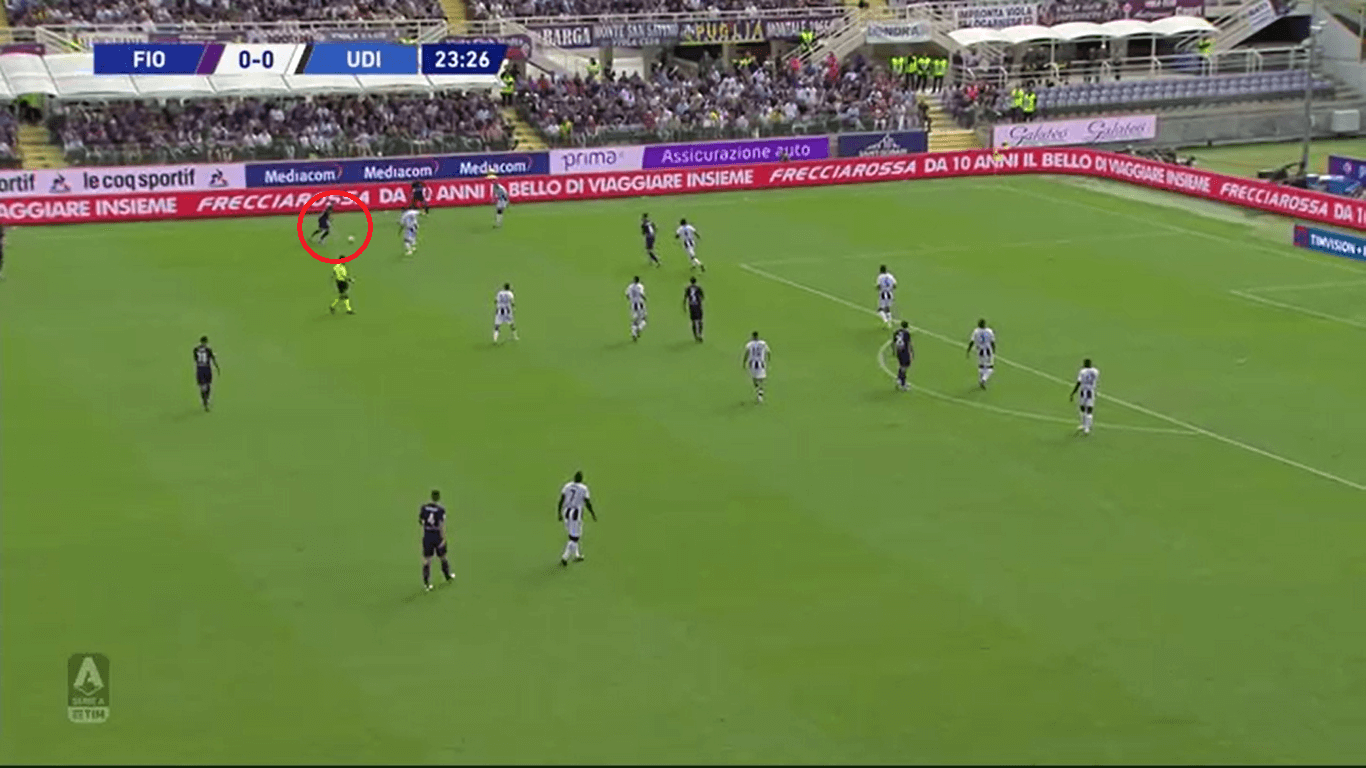 Even when he is not in the half-space, but rather fully on the wing where it would get crowded, Ribéry is always able to find solutions in tight spaces. Again we see Dalbert further advanced, but also the midfield three try to provide deep passing options. This is truly a rather unique approach by Fiorentina, which does suit Ribéry quite well.

Ribéry does what the game requires

When Louis van Gaal joined Bayern in 2009, he wanted Ribéry in the centre of the pitch on top of a diamond midfield. Ribéry refused to do that back then and with the addition of Arjen Robben to the Bayern squad, van Gaal’s idea was passé anyway. However, Ribéry truly matured, as he does not stick on the left-wing stubbornly, but rather moves the way the game requires. 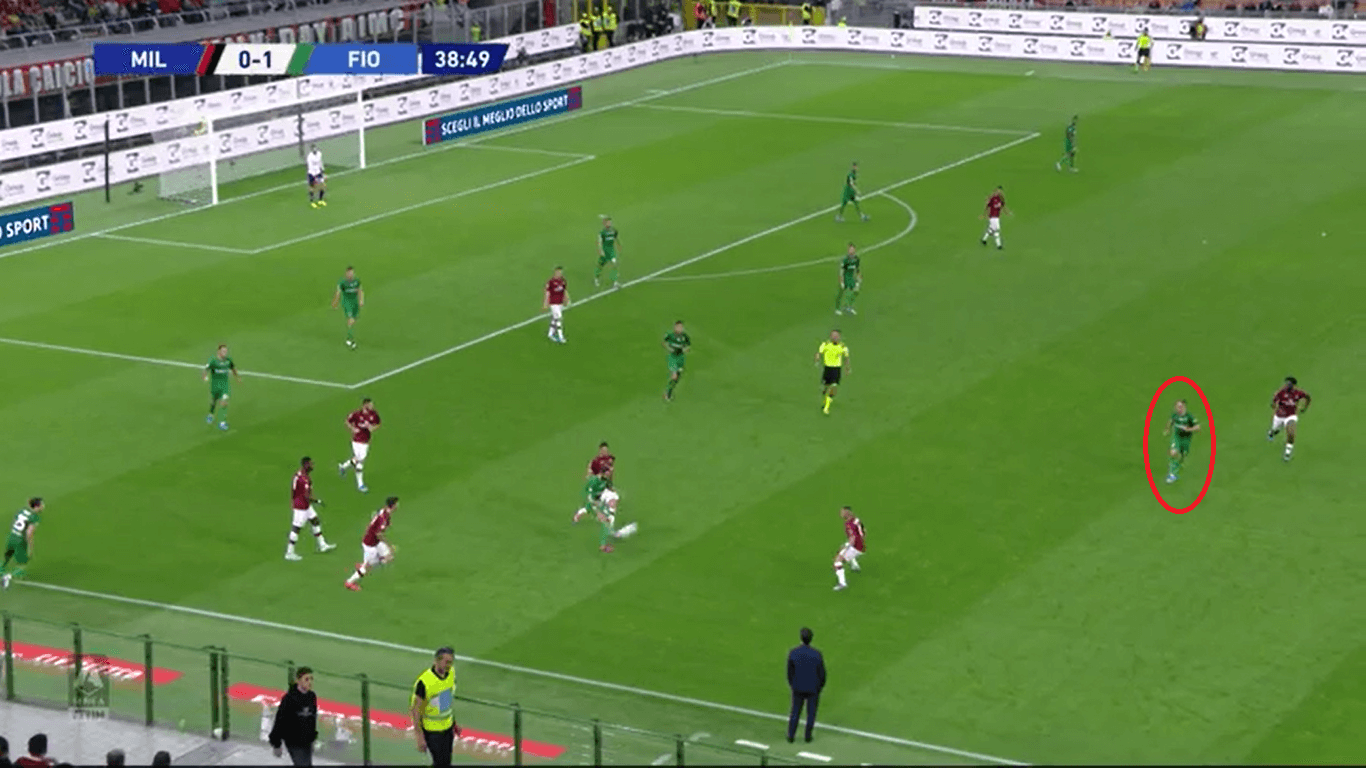 Especially when his team is in transition, we often see Ribéry near the ball to provide a short passing option, like in the image above. 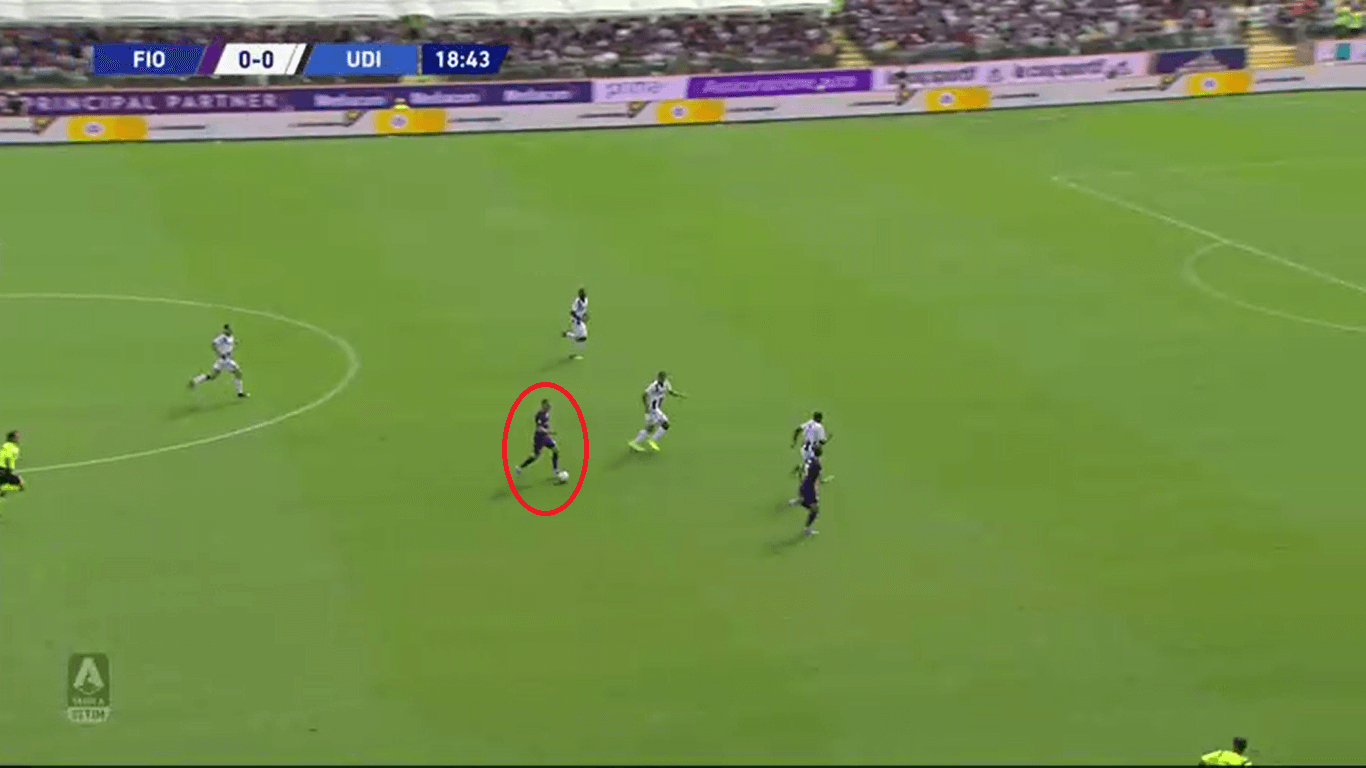 Here again, we see Chiesa and Ribéry counterattacking. These are moments in which Ribéry always prefers to be close to his teammate in order to be creative and make the most of the situation. 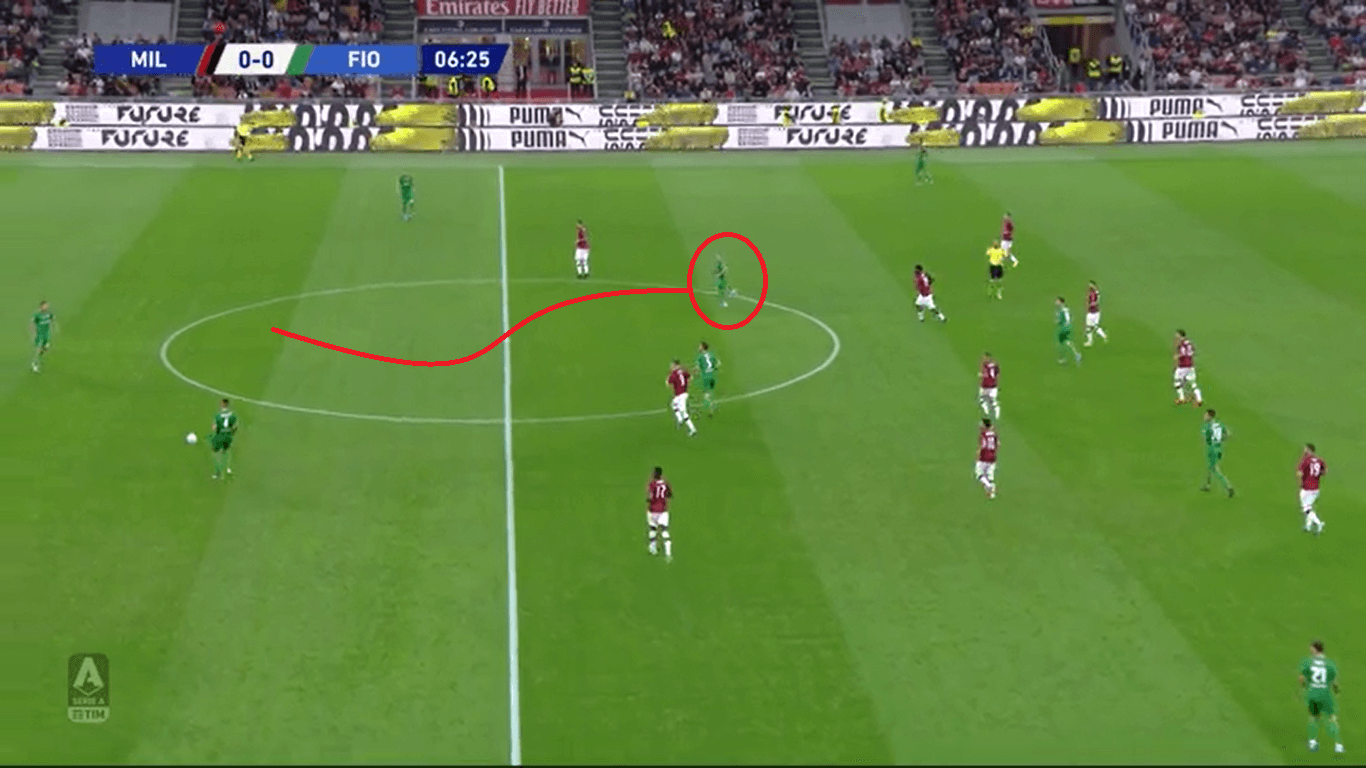 Occasionally, when Fiorentina seem to struggle during possession, Ribéry tries to help out by dropping back. It is rare in top-class football that someone who is listed as a striker drops back next to his centre-back. In such situations, it seems as if Fiorentina’s defenders are also somewhat surprised, as they tend to pass the ball somewhere else without using Ribéry at all. If Montella is able to make better use of such situations, this could fairly improve Fiorentina’s possession game. Ribéry’s skill set, experience and knowledge of possession play should be important for Fiorentina.

Despite some minor problems like this one, Ribéry’s great quality in the final third proves to be incredibly valuable for Fiorentina. 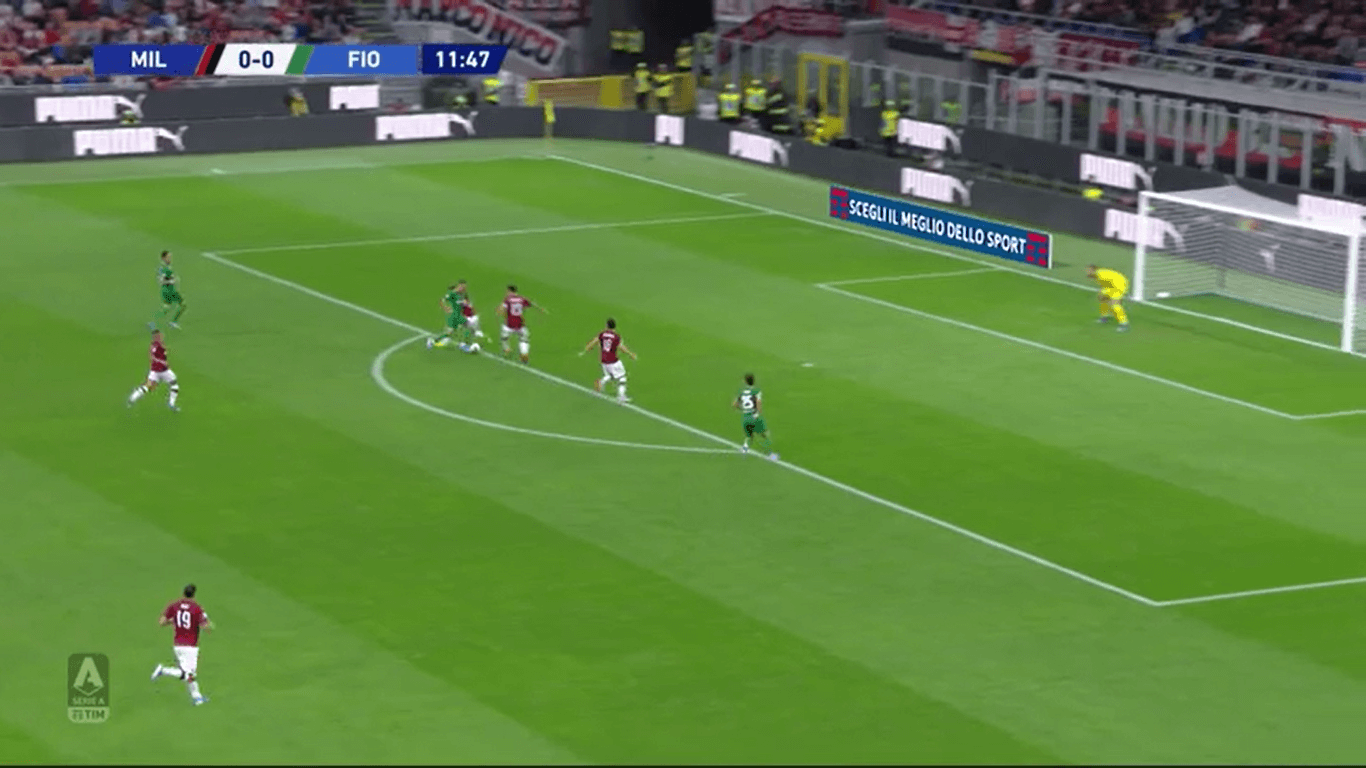 This dribble against Milan, splitting two defenders, was sheer world-class. At the end of this sequence, Fiorentina were able to score the opening goal.

In that very same game, Ribéry scored a great goal cutting inside a bit and finishing clinically. This kind of quality is not often seen and will for sure bring a few extra points for Fiorentina in this year’s competition. 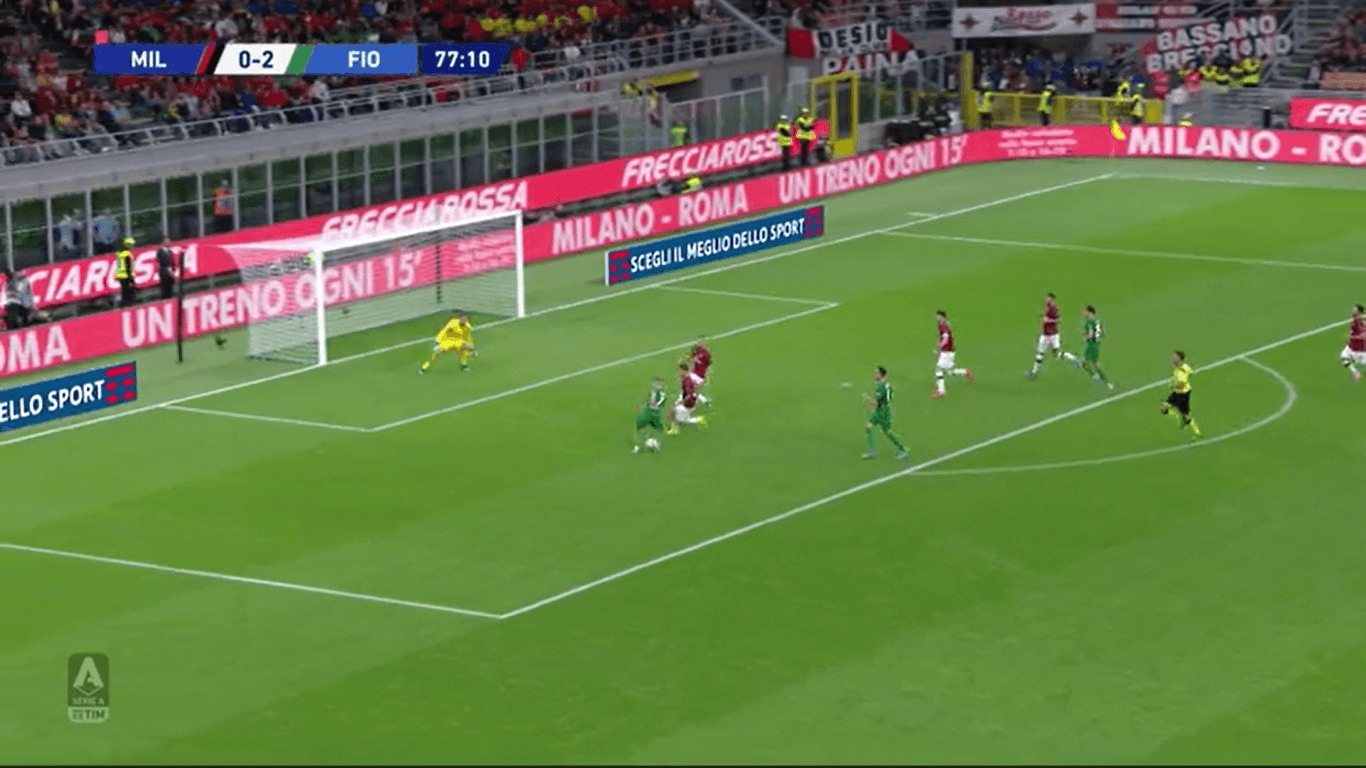 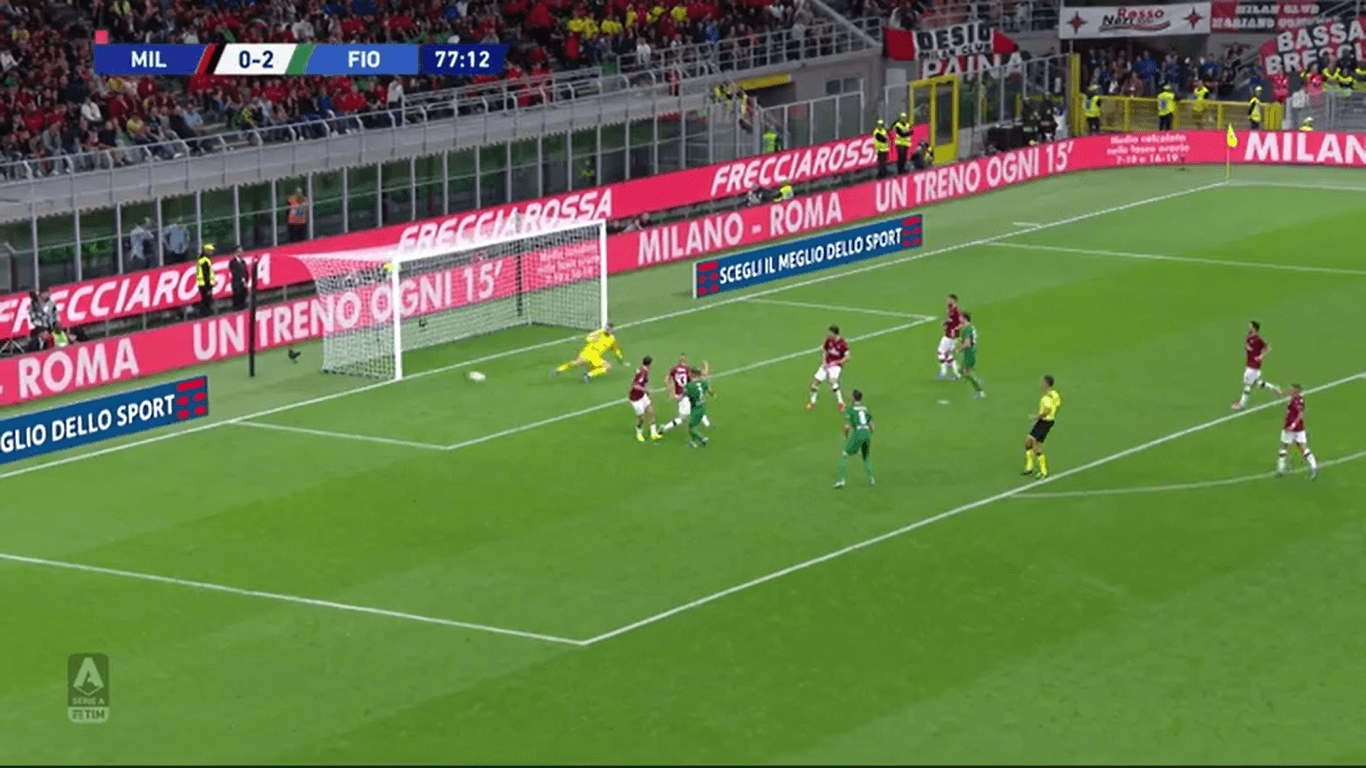 Ribéry has aged and thus plays a different role compared to his peak at Bayern. Nonetheless, he is extremely important for Fiorentina and still one of the best players in Seria A, like our tactical analysis showed. Thanks to Montalla’s defensive set-up, Ribéry is able to preserve his energy while still contributing to the team’s defence. He is then able to unleash his bear strength when it comes to showing his creativity in the final third. If Montella can also adjust the possession game and make better use of Ribéry in that sense, both Ribéry and Fiorentina will be even better.