Antoine Griezmann was Barcelona’s big scoop of the summer as the Frenchman joined the Catalans from Atlético Madrid for €120m. And even though he managed to bag three goals and assist further two so far in the 2019/20 campaign, the first months away from the capital were quite rocky for Blaugrana’s World Cup winner.

This tactical analysis scout report will use analysis to try and figure out why is Griezmann struggling to adapt to Ernesto Valverde’s tactics and what seems to be his problem at the moment.

The core of the problem is rather simple at first – Griezmann is no winger despite spending some time out wide at the beginning of his career. If we take a quick look at his time with Atlético Madrid, we can easily conclude where exactly does the Frenchman feel most comfortable.

In the 257 games he played for Rojiblancos, he managed an impressive 133 goals but the key information here is actually that he was played as the team’s centre-forward in 121 of those games, scoring 73 out of the 133 goals in the process.

This shows us that there is no doubt – Griezmann arrived at Barcelona hoping to become their striker, deployed either by himself up top or accompanying Luis Suárez in a formation that utilises a tandem in the forward line.

So far, that hasn’t happened since Barcelona prefer the 4-3-3 system as opposed to Diego Simeone’s 4-4-2 Griezmann is used to. In the former scenario, the Frenchman is delegated to the left as long as Suárez is on the pitch.

But obviously, that hasn’t really worked out for him as his performances diminished and he is yet to make a significant contribution to the team while playing out wide.

This tactical analysis scout report will now turn to an analysis of both of these positions and try and find reasons for the Frenchman’s struggles.

One thing that we’ve seen so far and can say for sure is that he won’t really thrive at his current left-wing role. The reason behind this is a straightforward one – out wide, Griezmann is not given enough freedom to operate, is limited in what he can offer and often ends up isolated from the team.

What we’re used to seeing from him is brilliant movement that creates space for others. At Atlético Madrid, and also at Barcelona when given the chance, Griezmann would often drop to deeper positions in the pitch in order to receive the ball, drag the marker and then start the attack himself.

When deployed out wide, however, his tendencies to support the build-up are mostly wasted because Barcelona lose any sort of presence further up the pitch and without runners to swap positions with or players who simply give him an option to advance the ball via his passing, he suddenly becomes invisible.

Notice below how that often looks on the pitch.

Griezmann has dropped deeper to receive the ball but is easily collapsed upon and has nowhere to go. Notice how his absence up front has left a lot of unused free space but with no one to exploit it, this becomes a weakness for Barcelona rather than an advantage.

Similarly, below we can see more examples of how teams adapt and can effectively mark him out of the game. Since he’s not the type of player who often beats his man with pace and skill, his wide positioning and hugging the touchline actually work against him in that scenario.

Notice below how he’s isolated from his teammates and has no options to move into or possibilities to drag his markers away.

What kept happening in that specific game against Inter Milan was the Nerazzurri man-marking him and giving him no link-up possibilities by stopping the overlap as well. As a result, his only touches of the ball were out wide and in isolation where he wasn’t able to contribute anything.

A similar thing happened when Barcelona faced Athletic Bilbao and Getafe. Griezmann would only receive the ball in one specific area of the pitch when the Catalans were building-up.

But the course of action after that would always follow the same patterns – Griezmann can either cut inside and enable the overlap or stay wide and be forced backwards. Either way, the opposition didn’t have much trouble stopping the attack. 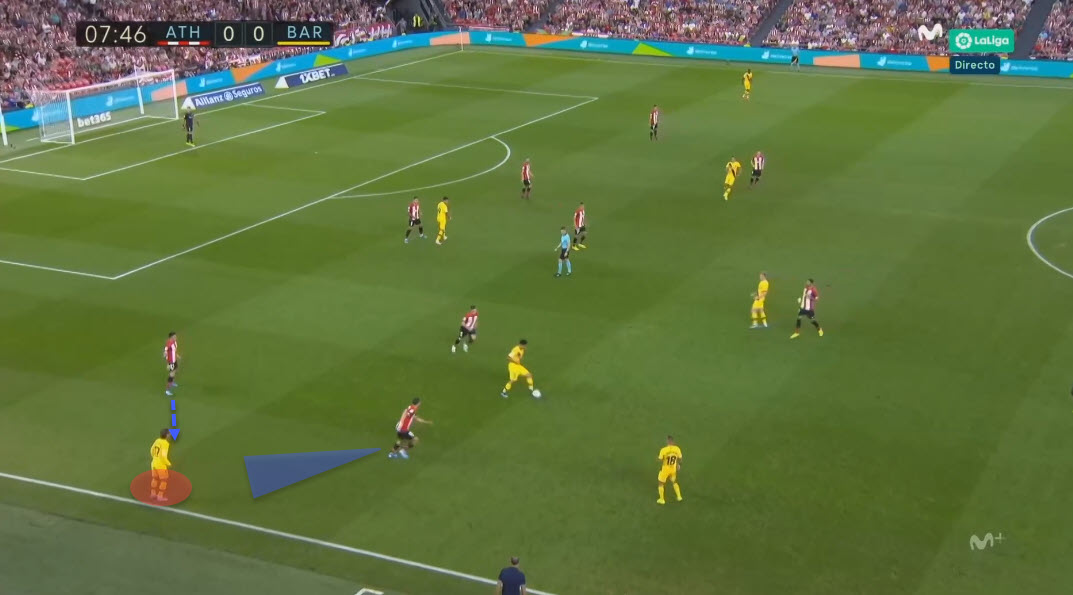 Finally, with his tendency to cut inside, Barcelona would lose their width completely and Griezmann would end up occupying the same space as either Suárez or Lionel Messi. The latter also traditionally always cuts inside and the former occasionally drops deeper as well.

Notice in the image below how that sometimes resulted in both players basically occupying the same position, making themselves an easy target for the defenders.

Let’s take a look at Griezmann’s pass map and heatmap from a fairly average game he played as a left-winger. What we can immediately notice is his tendency to strictly occupy the left half-space and hug the touchline out wide.

Not only does that mean that Barcelona lose out on any width on the left if the full-back is either not offensively oriented or simply shut down by the opposition, but it also makes Griezmann a fairly predictable target that’s easily marked out of the game.

This is even further emphasised by the fact that he only averaged 46.6 touches in the six games he’s played in that position.

Clearly, being played on the left-wing isolates him too much and limits him in what he can bring to the team and his qualities suddenly become less visible and wasted.

But he’s a completely different kind of a player when deployed as the team’s centre-forward. This tactical analysis scout report will now see how his skill set aids Barcelona’s tactics in that scenario.

When we talk about Griezmann’s biggest qualities as a prolific forward, most of them come to light when he’s actually given the licence and the freedom to express himself.

One of his signature moves is his ability to drop deeper into midfield in order to provide a link-up channel and help progress the ball forward. As we’ve seen from the previous section of this tactical analysis scout report, that particular tendency did not align with the overall tactics of the team as Griezmann would end up isolated and Barcelona without any runners up front when acting as their left-winger.

In this scenario, however, Griezmann dropping deeper allows him to utilise his passing range and good decision making. For instance, take a look at the example below.

The Frenchman drops deeper to receive the ball, dragging two markers towards himself, creating space both in-between the lines in zone 14 and also enabling Ansu Fati, the team’s winger, to get more space out wide.

The reason why this works here and not out wide is that this situation gives Griezmann more freedom and crucially, targets to aim for with his balls.

With his dynamic movement across the pitch, Barcelona can use it to create advantageous scenarios all around the field of play. He will regularly step into the midfield to either add bodies and counter the inferiority or simply offer a link-up option to advance the ball, both of which can be seen in the following examples. 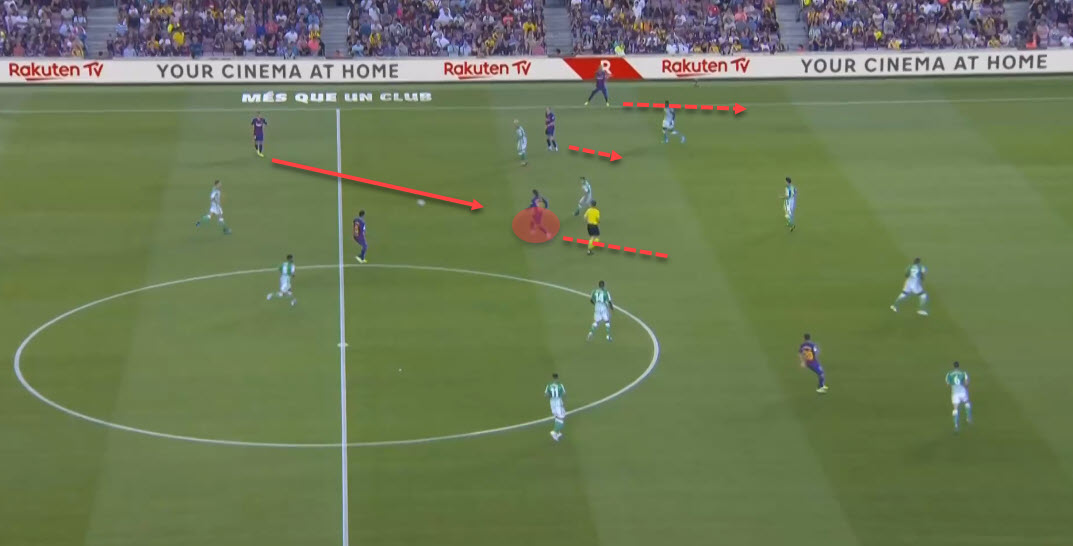 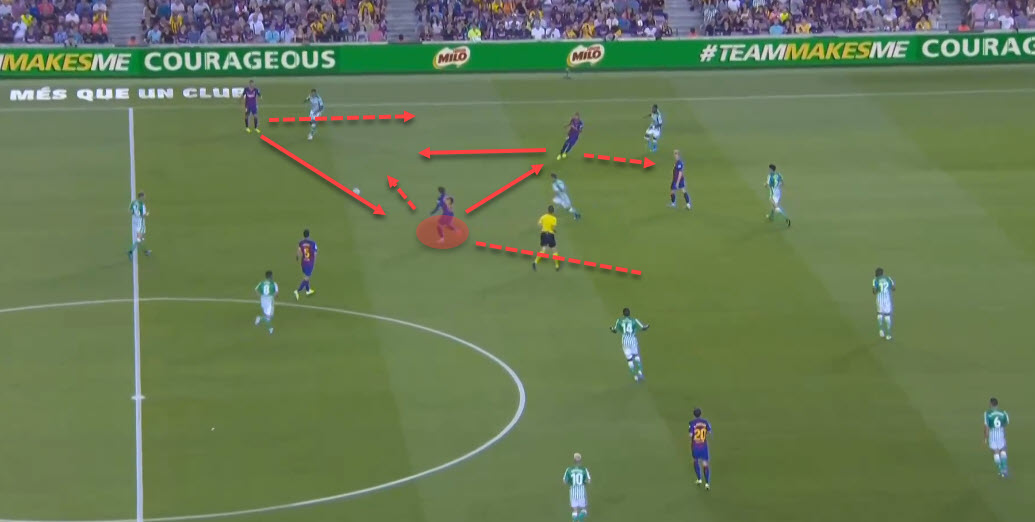 What is also interesting to note is that that’s the very same role he is given when playing for his national team.

For France, Griezmann is almost exclusively a central player, either deployed up front or just behind the striker, where his skill set can be utilised the most.

Their manager often instructs him to do the very same thing – drop deeper to collect the ball, help bypass the press and then carry it forward either by himself or by providing a teammate with a good pass. 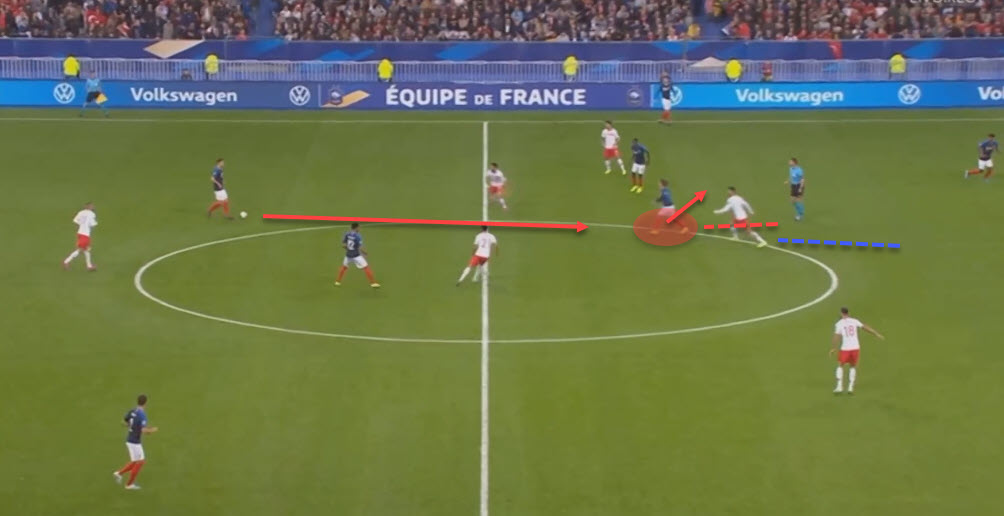 As a centre-forward, Griezmann simply has a bigger area he can impact on the pitch. This is more clearly seen when we take a look at one of his pass maps and heatmaps from a fairly average game in that role.

Notice how different that is from the maps we saw earlier in this analysis. As the team’s centre-forward, he is much more involved in the overall play and can start the actions practically all over the opposition’s half.

As a result, he already averaged 56.6 touches in only three games he played in that position with the highest one being against Real Betis with 83 touches to his name.

Similarly, two of his goals and two assists for the club so far have come from that position as well as it grants him the necessary freedom and tools to express himself.

Clearly, Griezmann’s skill set is mostly being wasted out wide because teams can easily shut him down, isolate him from his team and limit his obvious qualities, which, hopefully, this tactical analysis scout report made easier to understand.

When deployed as a centre-forward, however, Griezmann’s dynamism and the extra freedom he possesses can be better utilised as a whole – his movement, passing range and reading of the game all come to light in that scenario as he is more involved in the game in the first place.

It will now be up to Valverde to decide how he wants to proceed with this but for Griezmann’s sake and the sake of the club, let’s hope he chooses the right thing.