Shrewsbury Town hosted Sunderland at Montgomery Waters Meadow in League One at the weekend in Phil Parkinson’s third game as Black Cats boss. They were hoping to follow up a 5-0 home victory over Tranmere Rovers on Tuesday night with another impressive display, whilst their hosts were aiming to put right a poor performance at home to Gillingham last time out, where they could only muster a 1-1 draw.

It was the Shrews who secured a hard-fought 1-0 win here, Jason Cummings’ smart finish in the 22nd minute enough to secure the points. In this tactical analysis, we will analyse the tactics of both sides, and look at how Shrewsbury managed to clinch a fifth victory of the season. 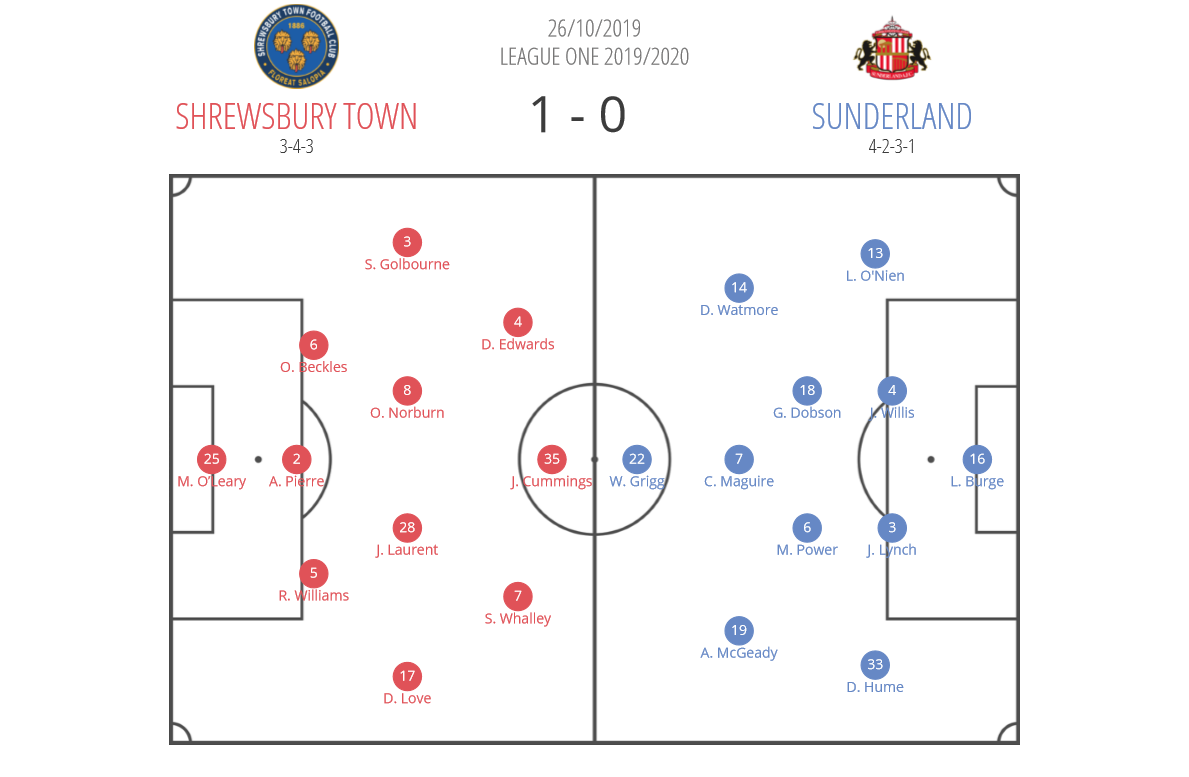 Home boss Sam Ricketts made three changes from their poor display at home to the Gills – albeit two of those were enforced by injury. Scott Golbourne came in for the injured Ryan Giles at left wing-back for his first league start of the season, whilst Dave Edwards and Shaun Whalley were favoured to Daniel Udoh (the second casualty for this match) and Sean Goss, with Ricketts opting for a slight formation tweak from their usual 5-3-2.

Consistency was chosen by Parkinson as he understandably kept faith with the same XI that had seen off Tranmere four days earlier, which meant a third start in a week – and fourth in a row – for the returning Duncan Watmore. He operated on the right of an attacking three behind striker Will Grigg, Chris Maguire and Aiden McGeady completing the trio, as they lined up in a 4-2-3-1 formation.

Shrews set out to frustrate

As alluded to above, Shrewsbury set up in a slightly different way to their usual tactic this season – a 5-3-2 with two frontmen. Here, the additions of Edwards and Whalley meant that they had some tactical flexibility in their play, switching between formations depending on if they were in or out of possession in order to negate a big part of Sunderland’s attacking armoury – their ability to make the pitch wide whilst also overloading centrally.

Both Edwards and Whalley, at 33 and 32 years old respectively, brought a great amount of experience and discipline to a reasonably young Shrewsbury team, which allowed them to switch between either a 3-4-3 when on the ball, or a 5-4-1 when out of possession. If this tactic was to be a success, then it needed players who understood their roles and were able to carry them out efficiently and quickly – as they indeed did.

Starting with when Shrewsbury were looking to attack, the two players would advance up in support of Cummings in order to provide greater numbers in the final third. In turn, wing-backs Golbourne and Donald Love would step up into the role of wide midfielders, moving into the spaces vacated by the two forward players, leading to the creation of a 3-4-3, as can be clearly seen below. 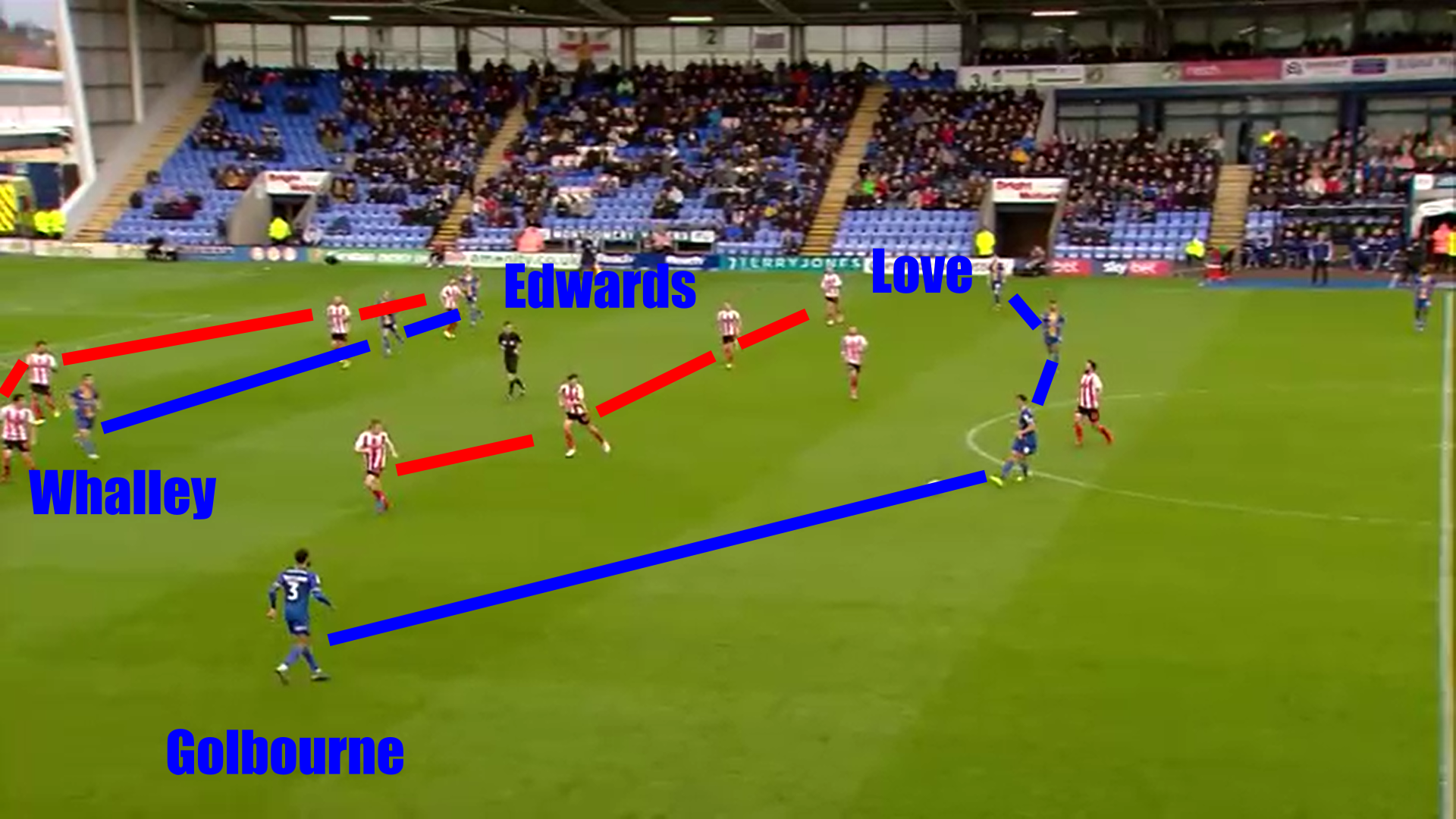 With Whalley a winger by trade and Edwards a central midfielder, their methods of attack on an individual basis were slightly different. Whereas Whalley would frequently look to isolate opponent one-versus-one in-and-around the final third in the hope of beating them with either speed or skill, Edwards opted to move inside into the role of an attacking midfielder, able to give support through smart movement and positions as opposed to direct running. Both were equally as effective, however, as they allowed the Shrews to pose a threat in various ways.

When off the ball, both would retreat to form a flat bank of four in the midfield (as seen below), allowing them to keep tabs on their respective opposing full-back as they advanced up the pitch (something we will analyse in greater detail later on in the piece). 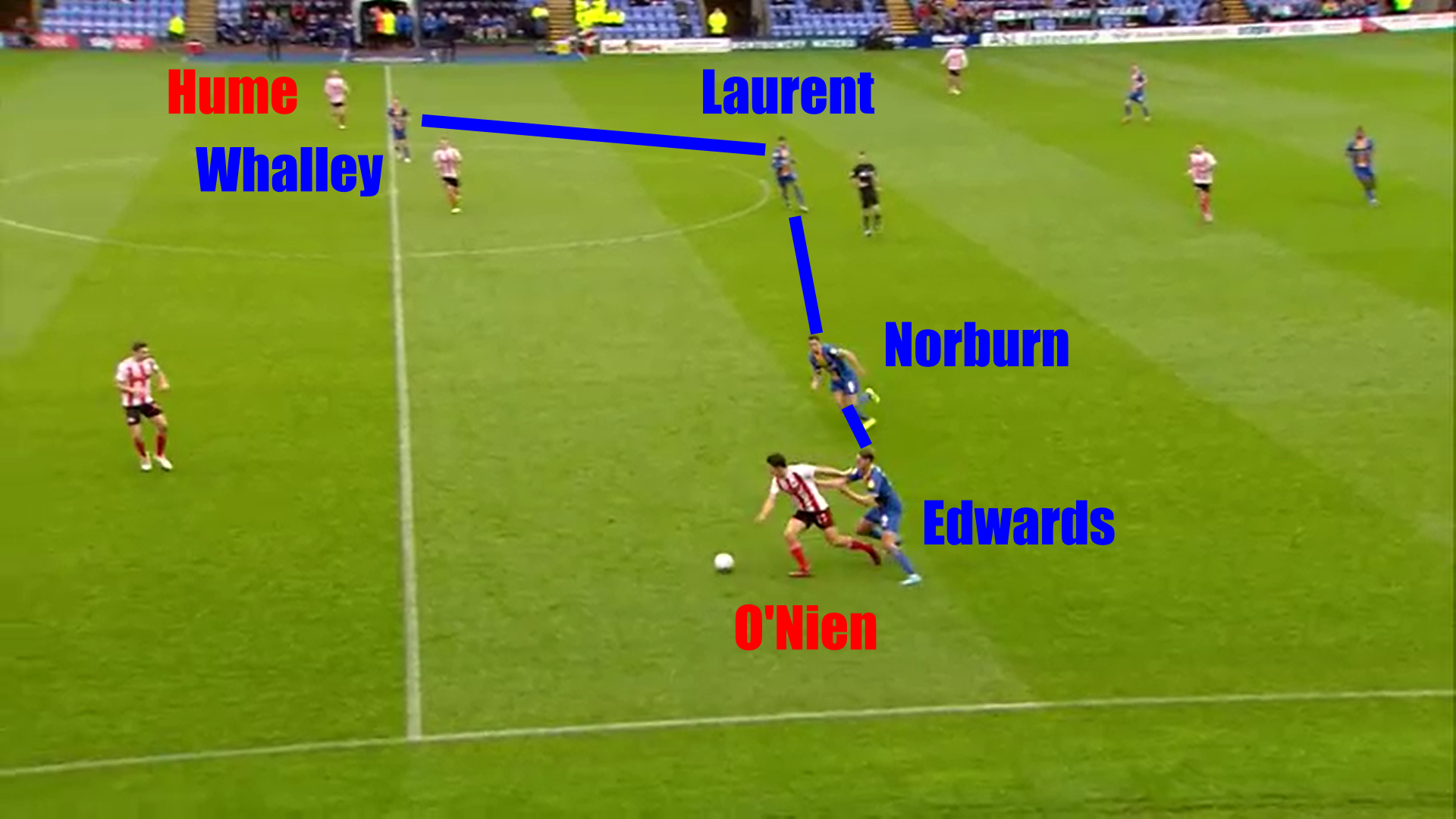 With Luke O’Nien and Denver Hume at right- and left-back respectively, Sunderland had two players adept at being a threat in the final third, and rightly looked to capitalise on this whenever possible. Yet, the awareness and discipline of Edwards and Whalley meant that both defenders were always tracked whenever they advanced into the final third, and so they could not easily give an attacking option on the ball.

With a star-studded forward lineup at this level consisting of players such as Grigg (101 goals and three promotions from League One), McGeady (formerly of Everton and was once transferred for £9.5 million) and Maguire (29 goals and 20 assists in this division), it is no surprise that Sunderland look to make the most of the attacking talents of their forward players as often as possible. The use of a three behind a striker allows them, in theory, to get on the ball and allow their talents to shine. As opposed to the widest of the three religiously remaining out wide, they are given the freedom to drift inside should they wish so that they have a wider field of vision of which to play from and cause damage. It was no different here, with McGeady, in particular, having a penchant to move in off the touchline as he looked to get on the ball in the half-space and create from there.

In doing so, this would create space for Hume to overlap, and the benefit would be twofold: not  only could they have numerical superiority inside through the movement of McGeady, but Hume’s aggressive run would allow them to retain width and thereby occupy as many varied areas on the pitch as possible, through a range of horizontal and vertical positioning from players. An example as such is seen below. 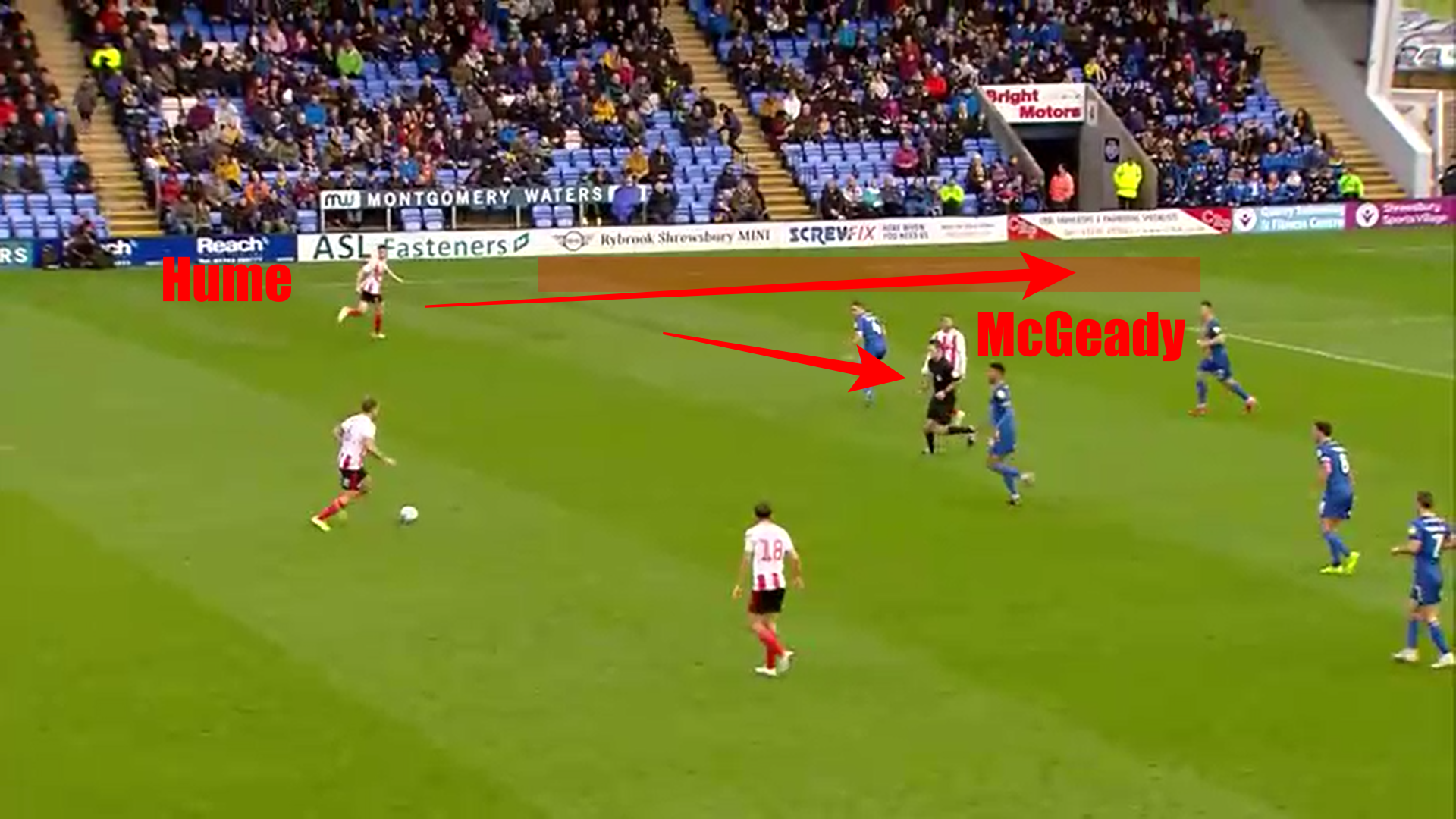 As the game went on, and the longer Sunderland were behind for, the more they were looking for their attacking stars to get on the ball and spark them into life. McGeady is usually key to their offensive threat, and so he frequently moved inside more and more for the reasons outlined above, whether off the left- or right-hand side, with Hume or O’Nien reacting accordingly to ensure they did not sacrifice any horizontal width, as seen below. 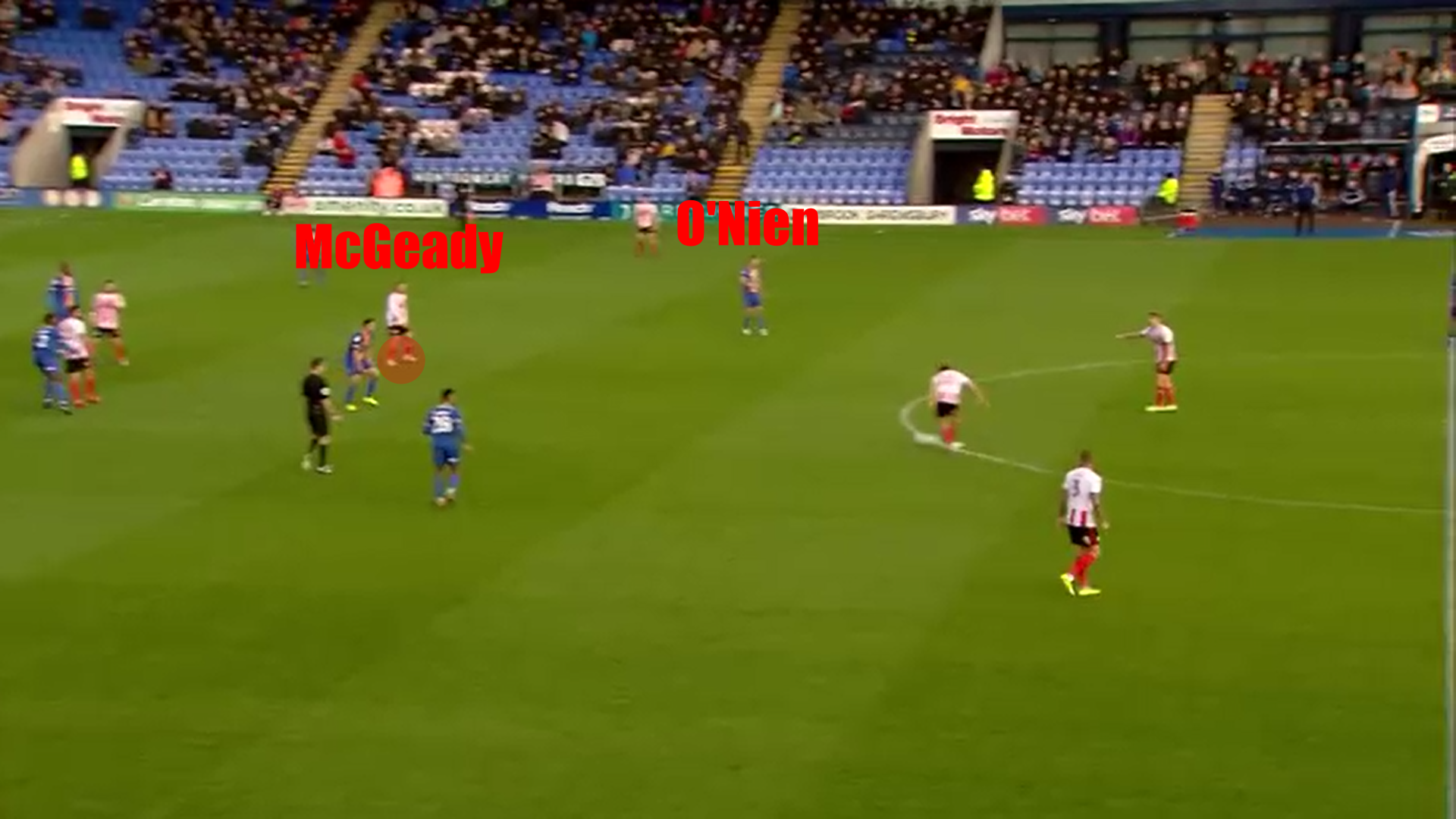 For the majority of the match they were kept at bay by a resolute Salop defensive unit, and it must be noted that they did not have much luck, hitting the woodwork three times. However, when they were able to carve open any opportunity they were not ruthless enough to take the chances.

Shrews get deeper as time goes on

Understandably with the longer you are put under pressure, Shrewsbury retreated further back in search of a clean sheet and the win. For the majority of the second half they sat in two flat banks of a five in defence and four in midfielders, focusing solely on preventing Sunderland from scoring through resolute defending as opposed to an aggressive display. Whilst it worked here, it should be noted that given how defensive it was, it will likely not do so should they adopt this every week. However, they were able to repel all that Sunderland threw at them here.

There was no intention of pressing the visitors in search of winning the ball back, playing in a low block and aiming to be compact, resolute and hard to play through. It can be seen here just how deep they were playing, with their midfield being situated only ten or so yards in front of the back five. It gave Sunderland’s central midfield duo of Max Power and George Dobson time and space aplenty on the ball, forward Fejiri Okenabirhie (on for Cummings) opting to sit on the player without the ball (in the below instance, Dobson) so that they could not switch the play easily and thus forced them into only one horizontal half of the Shrews’ defensive half – making it easier to contain. With O’Nien out on the right touchline, the only way they would be able to reach him is with an aerial diagonal ball which, if played, would give the hosts’ defence time to slide over and deal with it.

It was imperative that the unit as a whole remained compact and solid, but specifically the midfielders. Should one have been tempted to engage the man on the ball, this would have created gaps for Sunderland’s attackers to play in (as McGeady is seeking to find below) and ultimately removed any effectiveness of a low block. 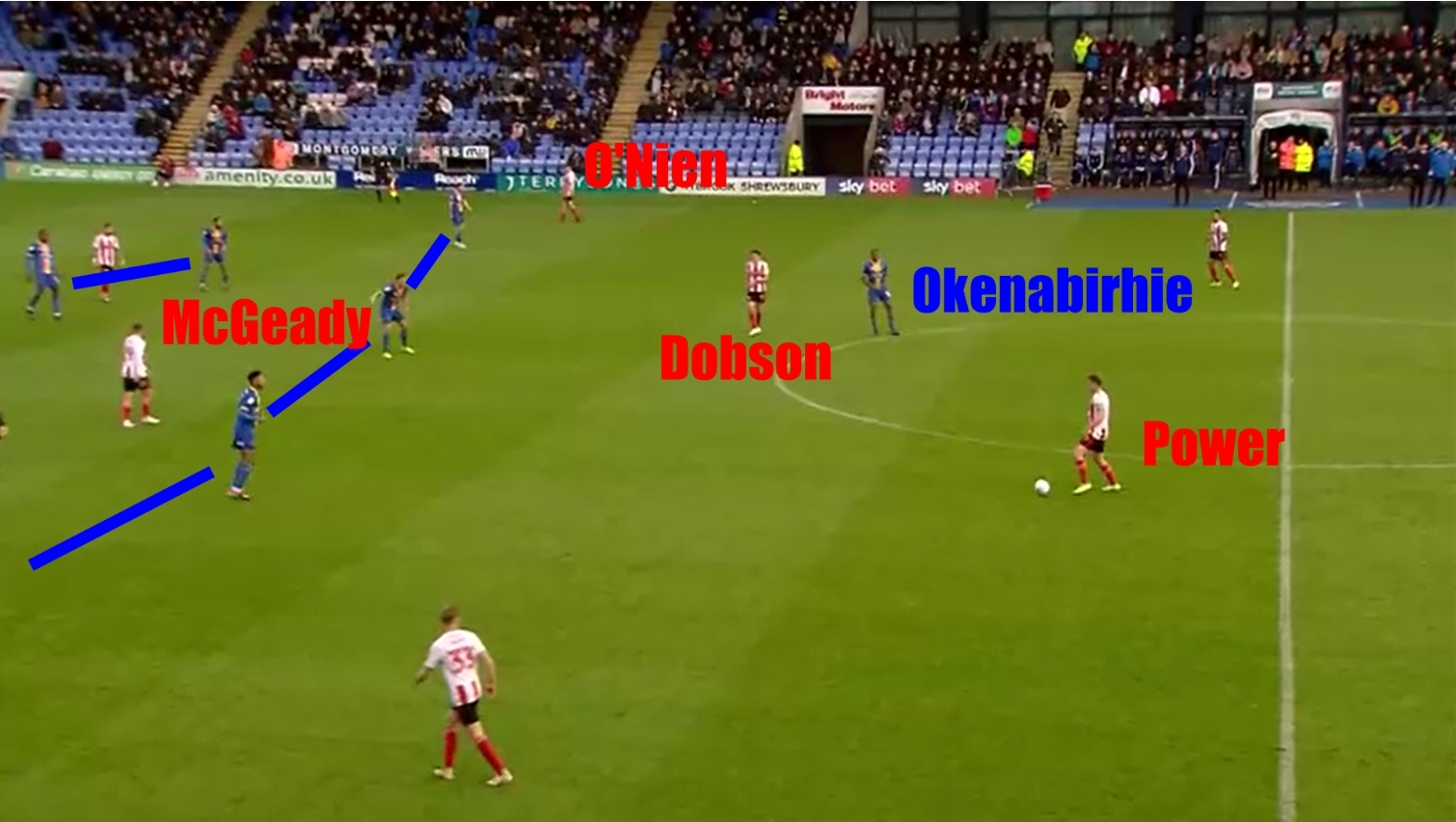 Far from being compact vertically only, Ricketts also instructed his men to be rigid horizontally. An example that highlights this perfectly can be seen below, with Edwards engaging McGeady out wide where you would usually expect the full-back to be in. As it is, right-back Love – signed by Ricketts from the Black Cats in the summer- remains extremely narrow and is defending the penalty area as a central defender would usually do. This is an approach not without danger – Edwards, clearly, does not possess the same aptness in defending in one-versus-one situations as Love, and so could have been passed easier by McGeady – but it did ensure that Shrewsbury had plenty of bodies defending their box at all times. 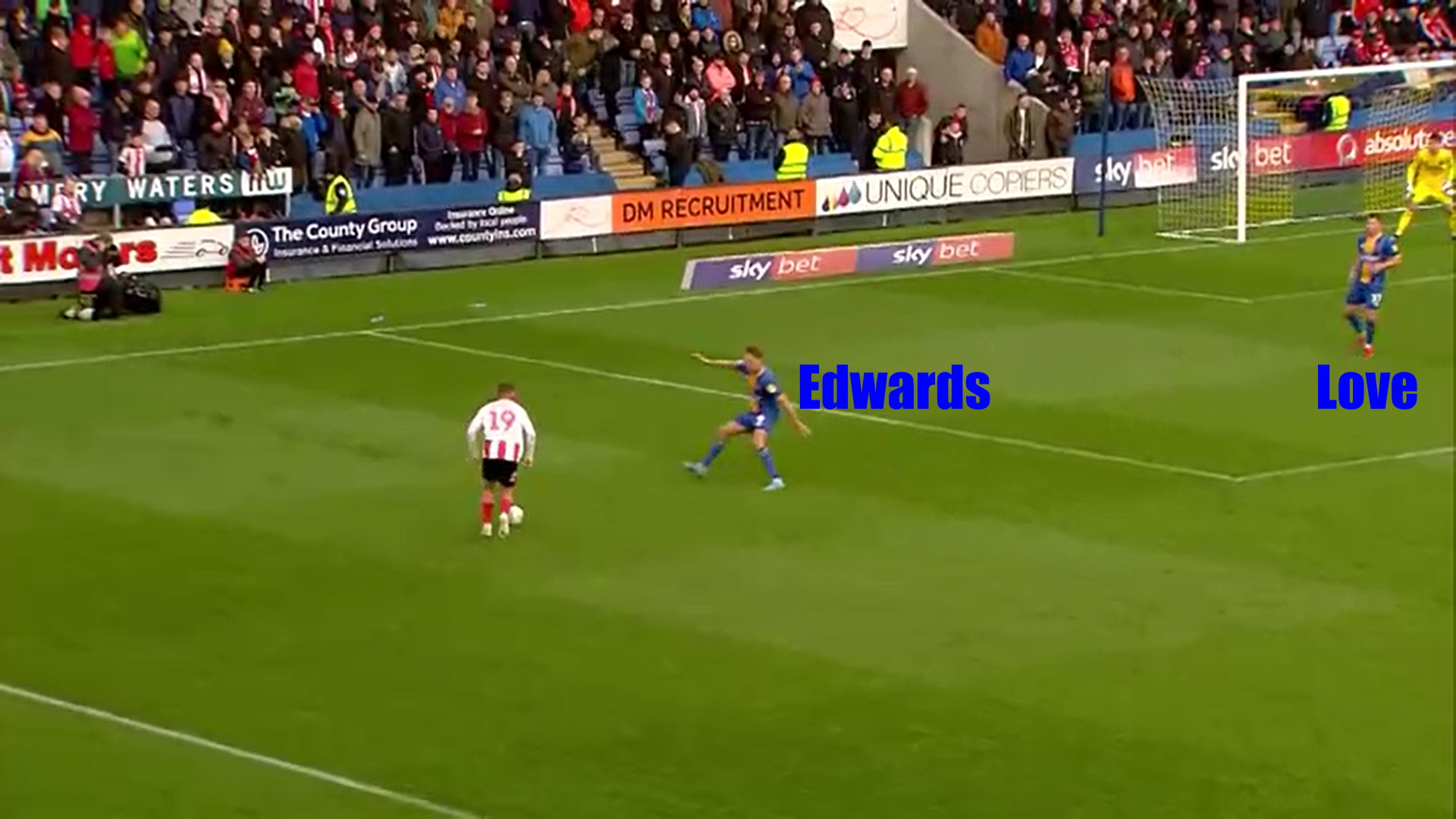 With Sunderland sacking Jack Ross at the beginning of the month, the appointment of Parkison has been made with the aim of returning to the Championship. After two losses in three, he needs to rectify their below-par start to the season if they are to have any ambition of moving back into the second tier. As for the Shrews, they will be understandably delighted at their first-ever victory over the north-eastern team. It was an extremely disciplined gameplan not only conjured up by Ricketts, but executed by his players, and the result is certainly a marker of what they could be capable of moving forward.