Preston North End played host to Leeds United on Wednesday evening in a clash between two sides fighting it out at the top of the Championship table: Preston sit sixth, whilst their opponents are second.

It was an entertaining match at Deepdale, with the home side opening the scoring through Tom Barkhuizen in the 74th minute. Just as it looked like they may have been able to secure all three points, substituted Eddie Nketiah popped up with a superb looping header to level the scores in the 87th minute, ensuring the points were shared.

In this tactical analysis, we will analyse the tactics of both teams, and use our analysis to explain the tactics used by the two sides. 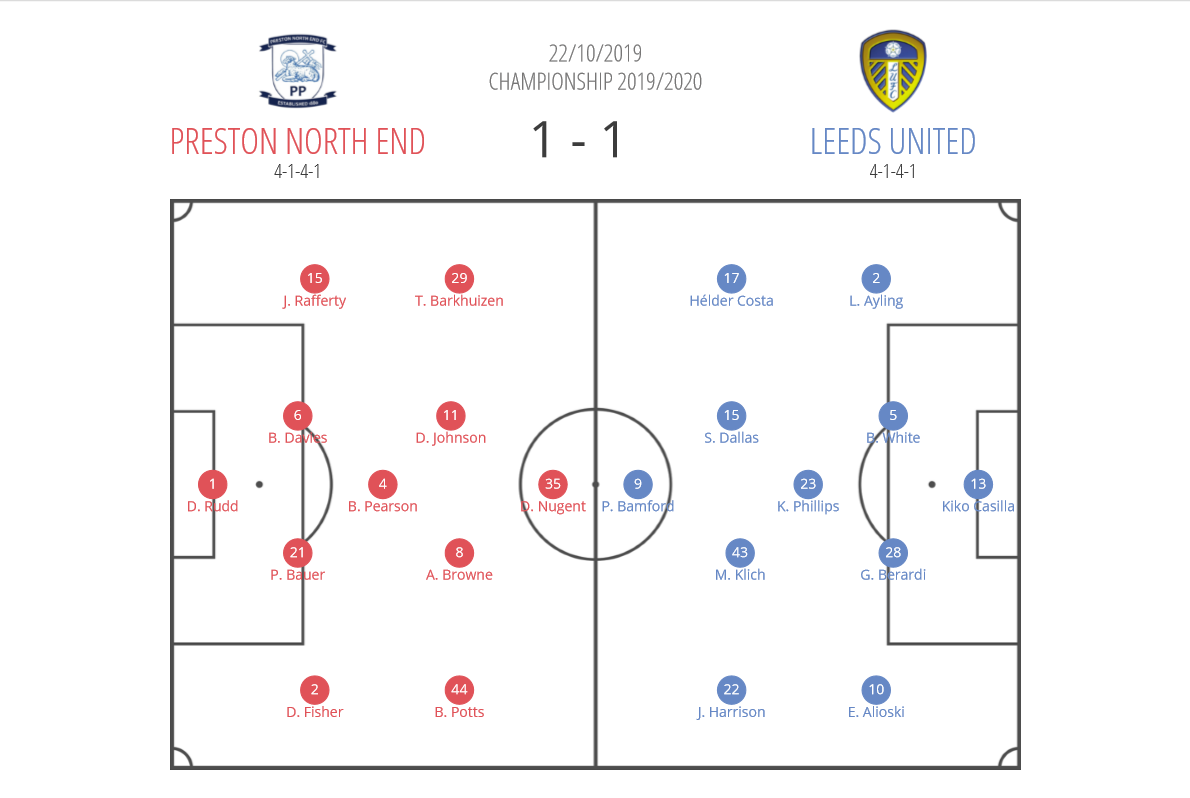 Preston manager Alex Neil made three changes from their disappointing defeat away to Reading last time out: Joe Rafferty replaced Andrew Hughes at left-back; Paul Gallagher dropped to the bench as Alan Browne was favoured in central attacking midfield; Brad Potts came into the side on the right of the attacking three ahead of Sean Maguire.

As for the visitors, they kept the same XI that had beaten Birmingham City 1-0 four days earlier. The attacking quarter of Helder Costa,  Stuart Dallas, Mateusz Klich and Jack Harrison were tasked with supporting lone frontman Patrick Bamford, with the goalscorer from that victory over the Blues, Kalvin Phillips, the man giving defensive protection in central midfield.

Neil has been keen to implement an aggressive style of play, and is very keen for his men to press opponents high up the pitch as they look for regains in their offensive third. It has been a feature of their game this season, and is a key reason for their successful start to the campaign.

However, against a side as comfortable on the ball as Leeds, the challenge was to ensure that their press was organised, well-practised, and that every individual in the team knew their roles – or else they would be open up and picked off. The fluid positional rotation displayed by Marcelo Bielsa’s outfit means that it is hard to press Leeds high, as often their players do not take up orthodox positions (for example, a full-back may be situated where a central midfielder would be expected to be, and vice versa). It was clear to see that every aspect of Preston’s will to try and squeeze United high has been well thought out, and taken on board by the players responsible for doing so.

In the below instance, with right-back Luke Ayling on the ball, Preston are intent on hurrying him to ensure he does not have the time or space to pick an easy pass into midfield. Such is the energy and zest that they are looking to press with, it is actually energetic defensive midfielder Ben Pearson – usually the deepest of their central midfield trio – who is engaging Ayling here on the left touchline. It is not as if he is the only Preston player in the vicinity – there are four more supporting him – and so the fact that it is Pearson, a player renowned for his energy and intent, who has been instructed to press the most aggressively clearly shows that they had been instructed to be extremely vigorous when looking to win back possession.

With Pearson vacating the space where you would expect him to operate – the centre of the pitch in front of the back four  – there could have been a danger of his teammates structuring themselves incorrectly and thereby exposing this now-open space for Leeds’ attackers to capitalise upon. Yet this is where the organisation of every player within their unit is so important and worked so well.

The players not pressing were positioned in such a way that it was nigh-on impossible for Ayling to play the ball into an area where his attacking teammates could have picked up the ball without the challenge of Pearson, and so this, therefore, removed any possible threat that could have come about through Pearson’s exuberance.

Looking below again, the midfielder is right on top of Ayling, and so any potential ball over the top could be smothered and prevented. Daniel Johnson is offering support to Pearson in the shape of being able to instantly engage Ayling should he turn inside, whilst Barkhuizen is positioned slightly further back to mop up any potential reverse pass inside that Ayling may be able to slip through. Finally, David Nugent is alert to the potential of a pass backwards, and so is situated in an area to be able to press should this arise. The only realistic option if Ayling wishes to keep the ball is back and across to Berardi – which is the exact decision he makes. It appears that this would then allow the Leeds defender to switch the play fully across to Alioski, who could then counter – but again, the systematic positioning of Preston prevented this. 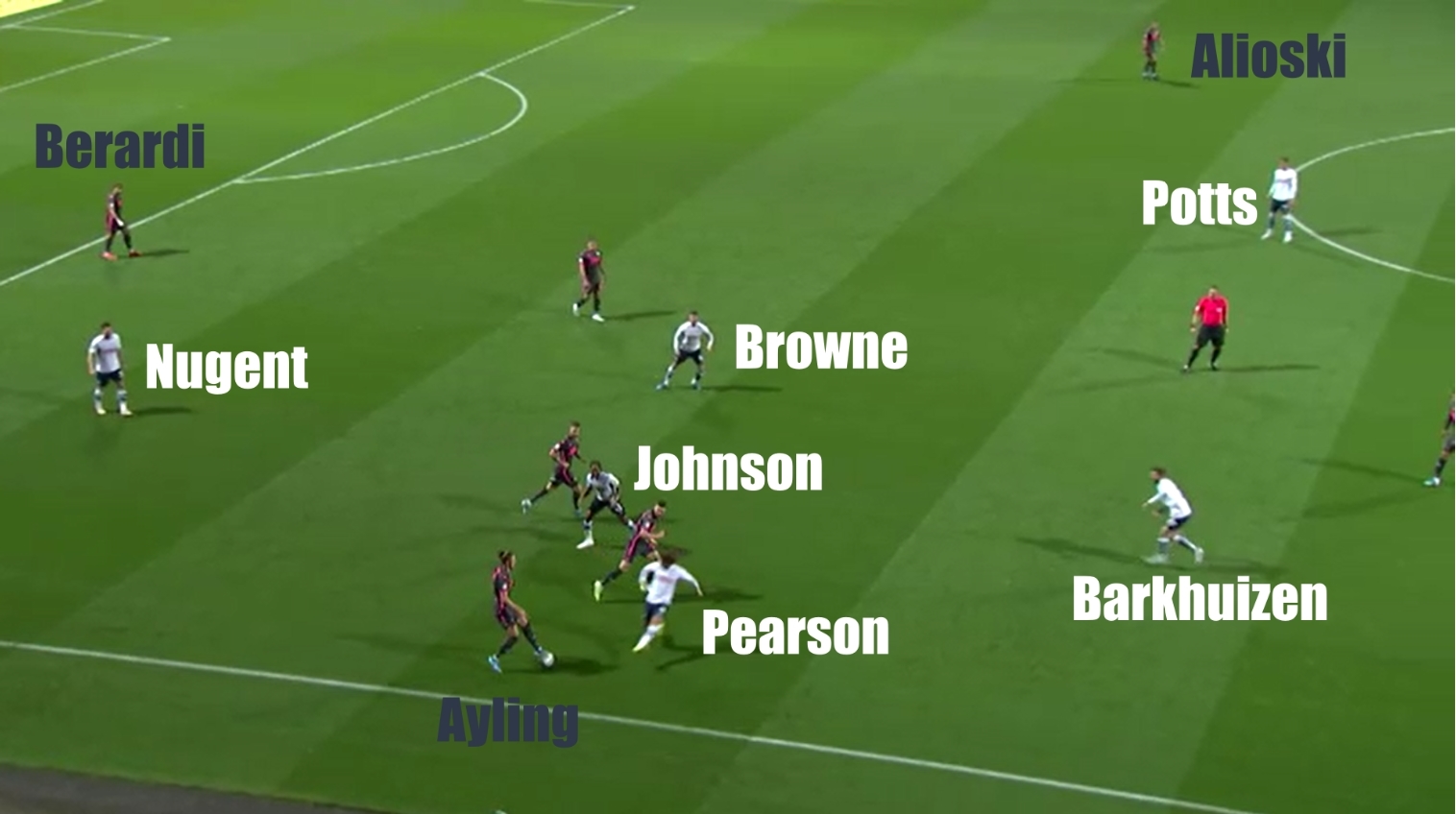 As the ball is worked across the pitch Preston quickly slide over, denying Leeds the chance to quickly manipulate the ball higher up. Potts instantly engages Alioski, whilst Johnson is aware of the importance Phillips plays in Leeds’ build-up play –  offering himself as a player to either bounce the ball off across the back four, or receive, turn and drive up the pitch – and so ensures that he is tight on the back of the young midfielder to prevent him turning defence into attack. Finally, right-back Darnell Fisher fully tracks Harrison back and therefore can press him from behind upon receiving. 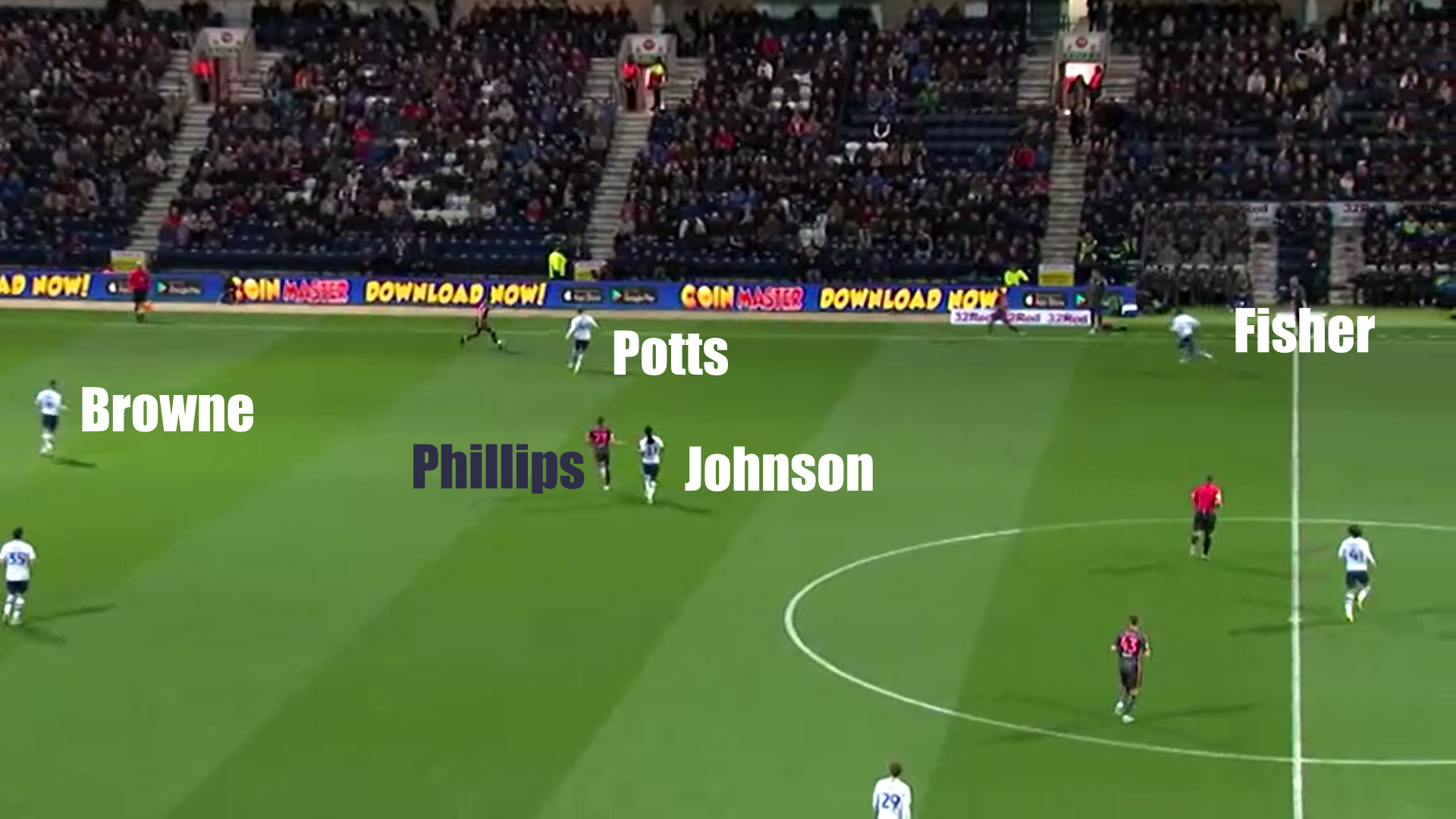 To further highlight the efficiency and effective of Preston’s pressing, a second example (below) is analysed.

Here, they force Leeds’ defence to play the ball across the pitch, preventing them from playing line-breaking passes through their structural solidity. In this situation, with Ben White on the ball, Barkhuizen remains narrow enough so that he is closing off any central passing lanes – preventing White from directly feeding one of their attackers, such as Dallas, who is looking to make a run off the back of Barkhuizen. However, he is not too narrow so that he cannot engage Ayling should White choose to pass to him instead. 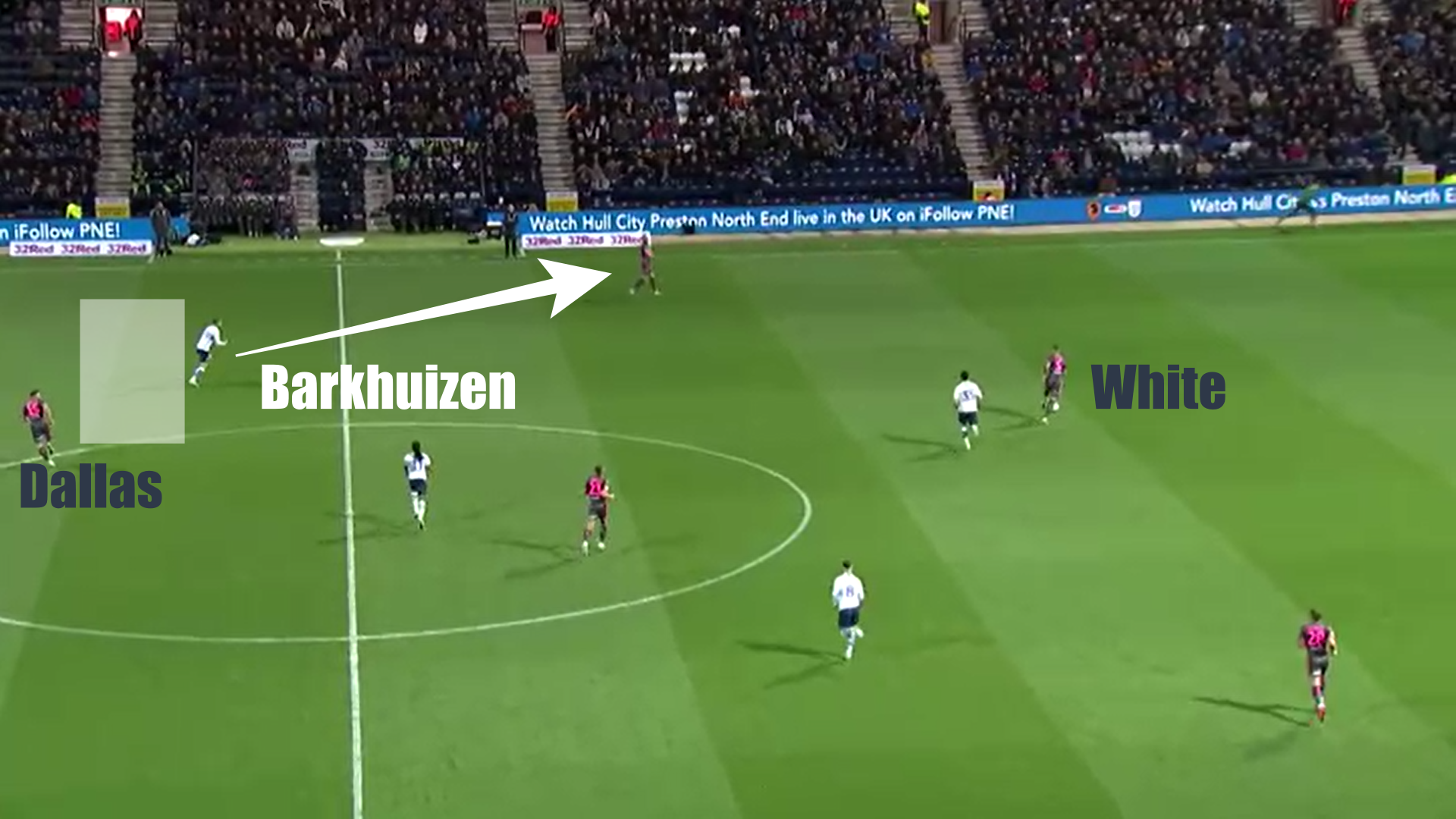 As it is, Barkhuizen waits for White’s body shape if give a big indication of where he is going to pass, and then reacts accordingly. Here, as soon as White closes off any possible forward passing option (he is also partly denied the chance to by the blindside closing down of Nugent behind him, below) Barkhuizen knows that Ayling is the only possible destination should White offload the ball and so can then quickly engage the full-back and deny him the chance of playing the ball forward with ease. As it is, Ayling is put under pressure and his pass in-field is intercepted – meaning that Preston’s press forced an error, and thereby worked to a tee. 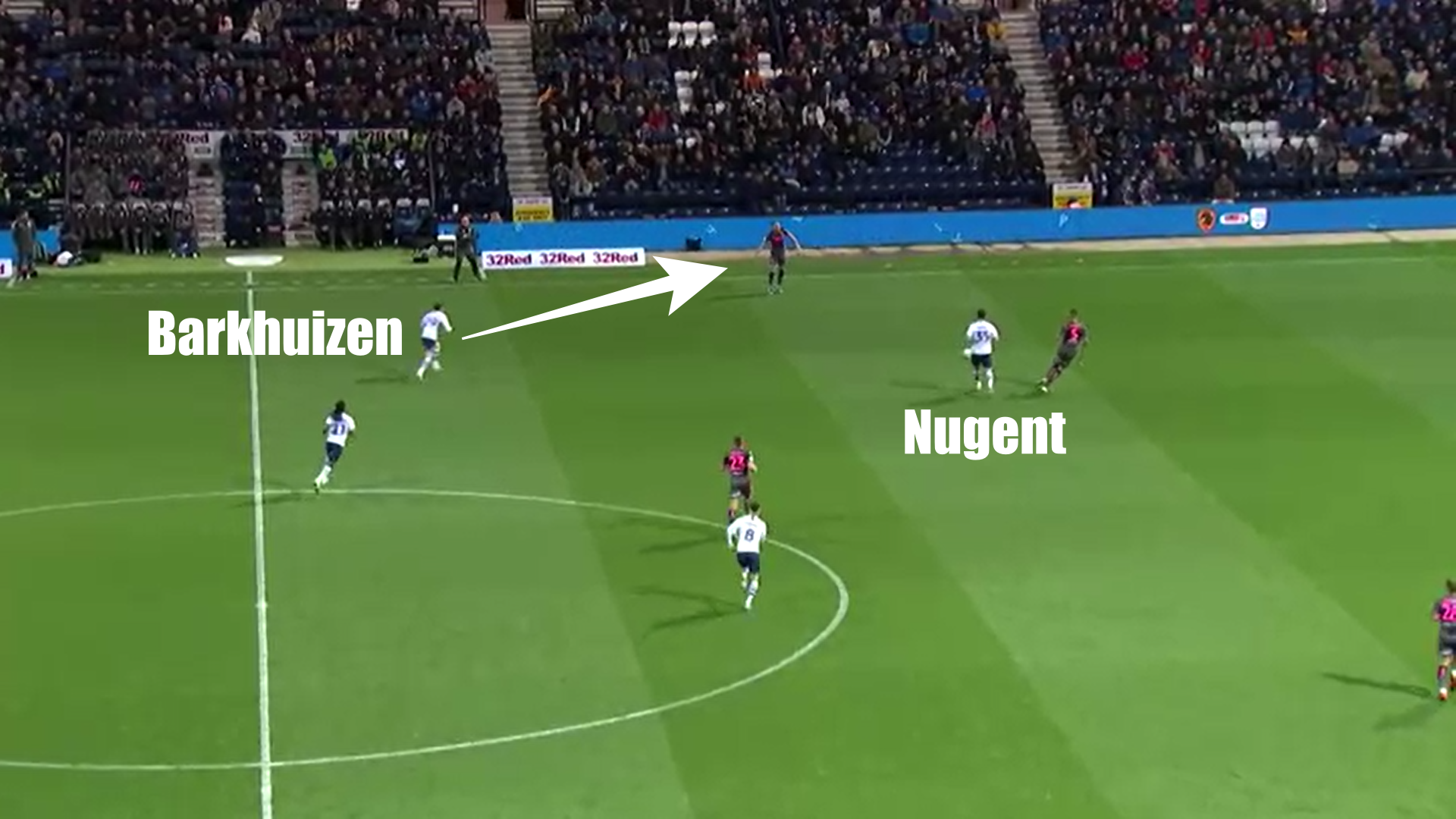 Despite Preston’s intelligent off-the-ball play, there were still clear signs of the attacking danger Leeds possess. As alluded to above, the four forwards behind Bamford are all incredibly quick and skilful, and this makes them exceptionally dangerous in transition. The side as a whole are adept at manipulating the ball and their positions to capitalise on this, and ensure there is constant width in order to exploit all possible areas of the pitch in transition.

Here, having won the ball back, Klich and Dallas, the most central two of the attacking four, remain narrow in order to create a 3 v 1 alongside Phillips and against Pearson. This is a rare instance of where Preston’s press was not successful, as with only Pearson as cover in front of the back four, there is a large vacant channel of space (highlighted) for either Dallas or Klich to turn into after receiving the ball. Additionally here, Harrison, and to a lesser extent Costa, retain their width in order to keep alive the option of a diagonal, thereby stretching Preston’s defensive lines horizontally. 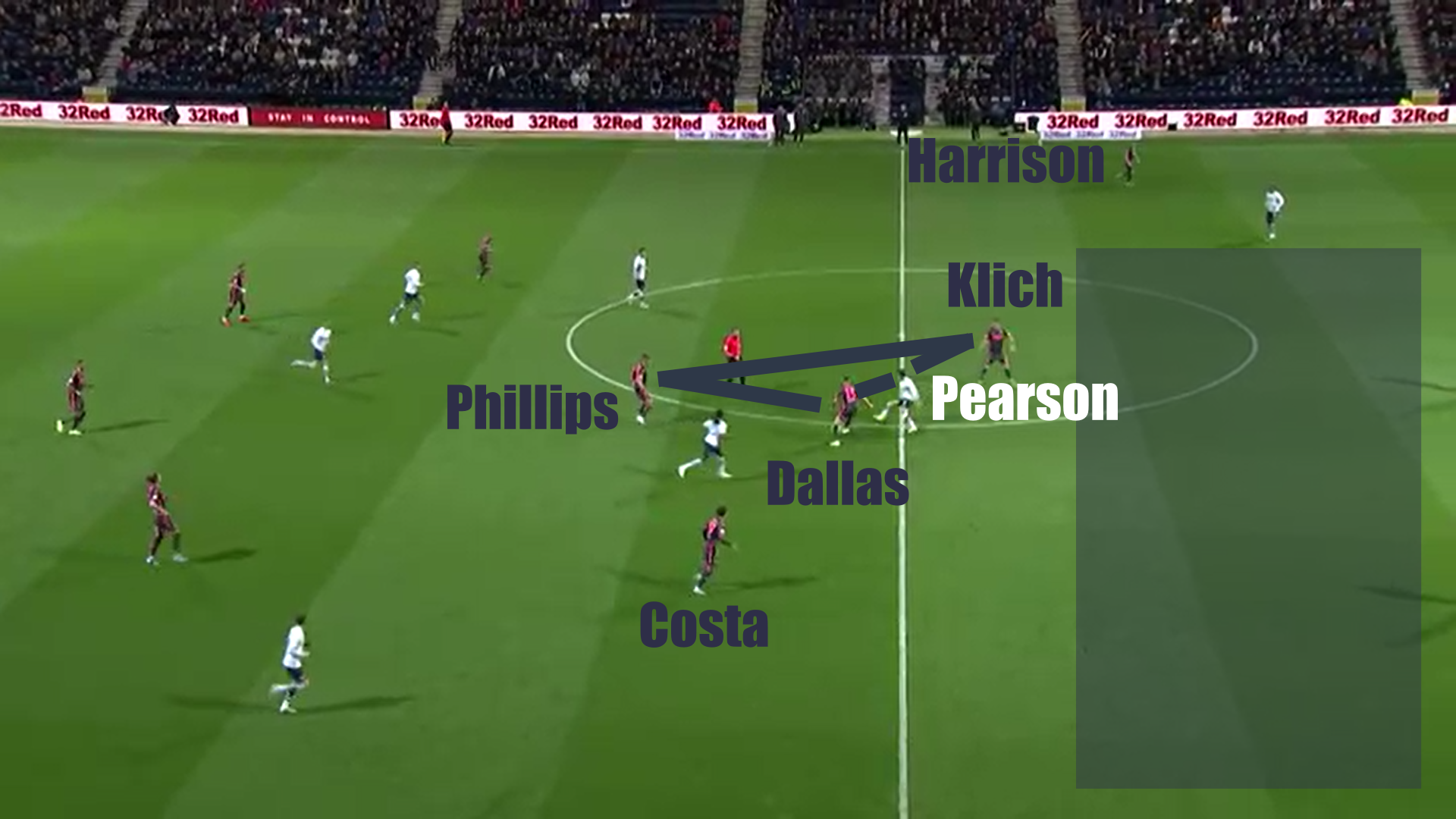 The option of a quick switch is key to Leeds’ play, as they have several players extremely capable of beating opponents in one-versus-one situations. As many teams look to remain compact and dense against the Whites, opening up and finding such opportunities can be hard – which is where the positioning of their wingers comes into play.

For the ball-far winger, no matter how distant they are from the play, they always remain extremely aggressive in their positioning to ensure the option of a switch of play is on.

An example is seen here, with Costa situated very wide whilst the ball is being worked across the pitch. 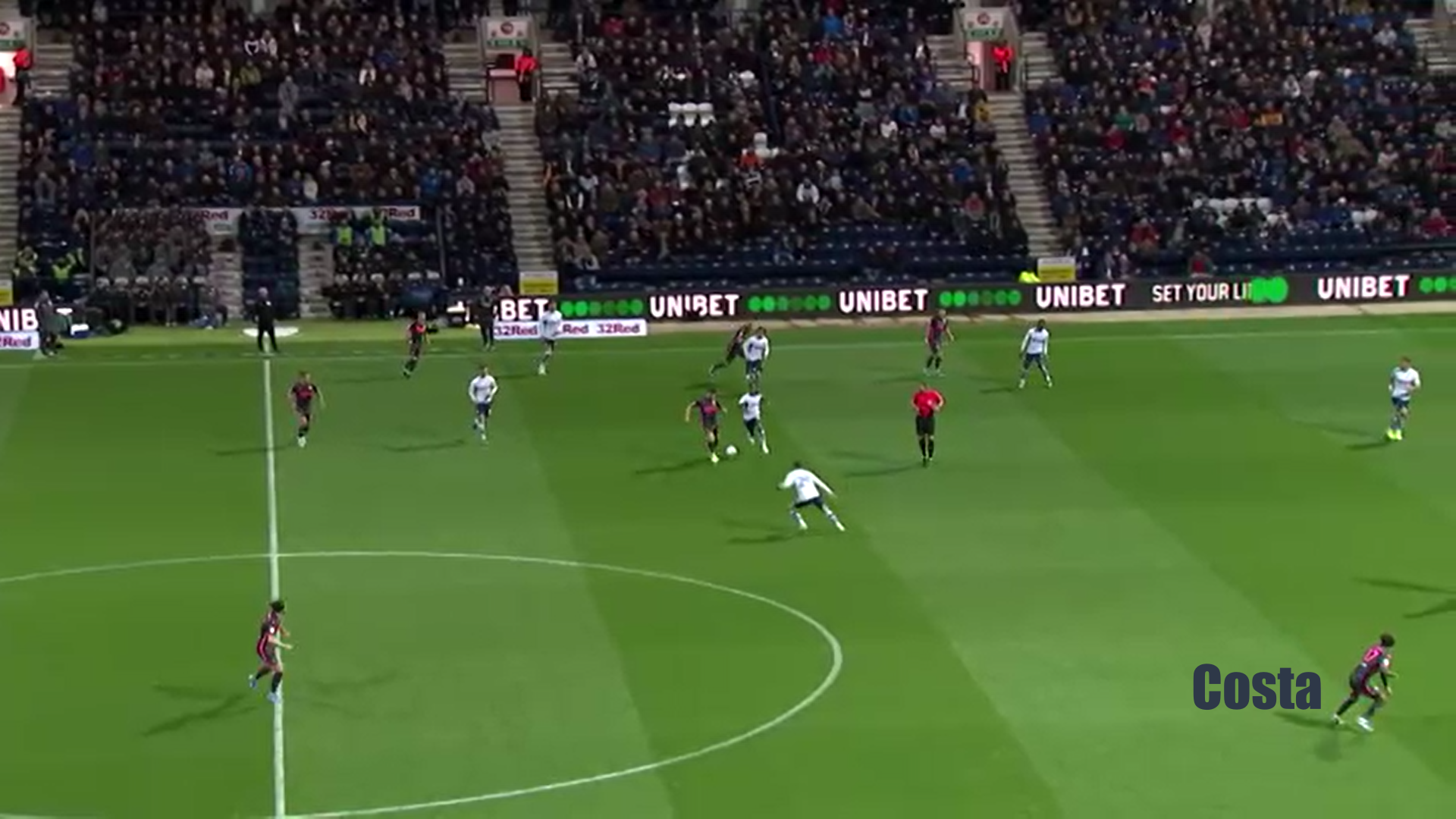 As it reaches Ayling, the fact that Costa is already out on the touchline means that Rafferty has to account for this by moving slightly further to his left – which then opens up a wider gap between him and Davies. Leeds’ quick switch allows Ayling space to advance into and play a slide ball through to Bamford, who profits from this open space to run into. Even though Costa did not directly influence the play here, his positioning was vital in the creation of a chance for Bamford. 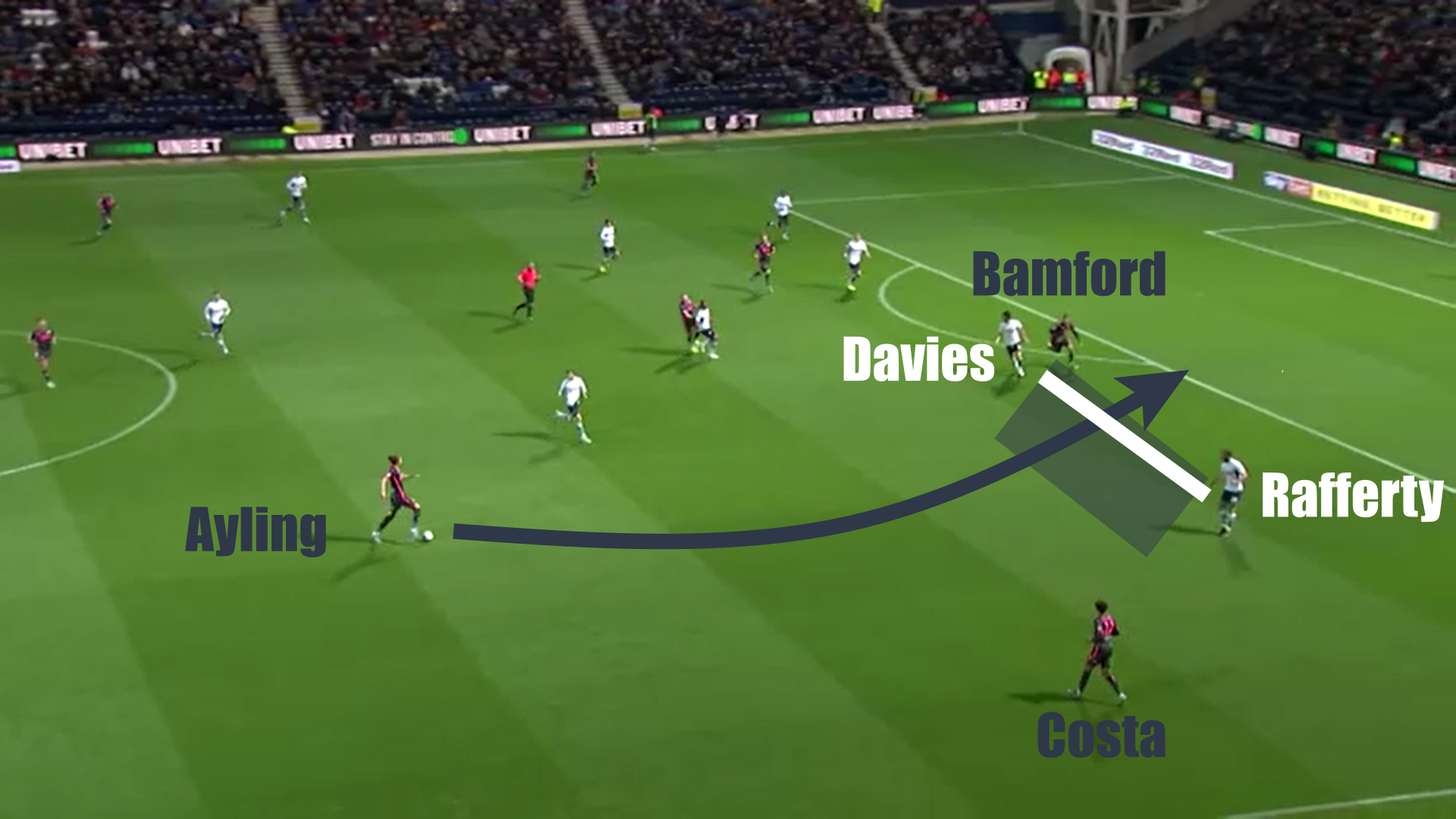 Additionally, the presence of the ball-far winger permanently remaining wide is also useful in allowing Bielsa’s men to relieve pressure.

Here, Preston are, once again, successfully suffocating the Yorkshiremen of time and space on the ball in order to prevent them from advancing up the pitch, with four players close to the ball as they look to press. As it falls to Ayling, he instinctively without even looking plays a drilled cross-field pass out to Harrison, knowing that the winger would be there. The benefit of this is twofold: not only has it bypassed Preston’s press and prevented Leeds from losing the ball amidst swarms of Lilywhites’ players, but it has also allowed Harrison the chance to take on his full-back one-versus-one. 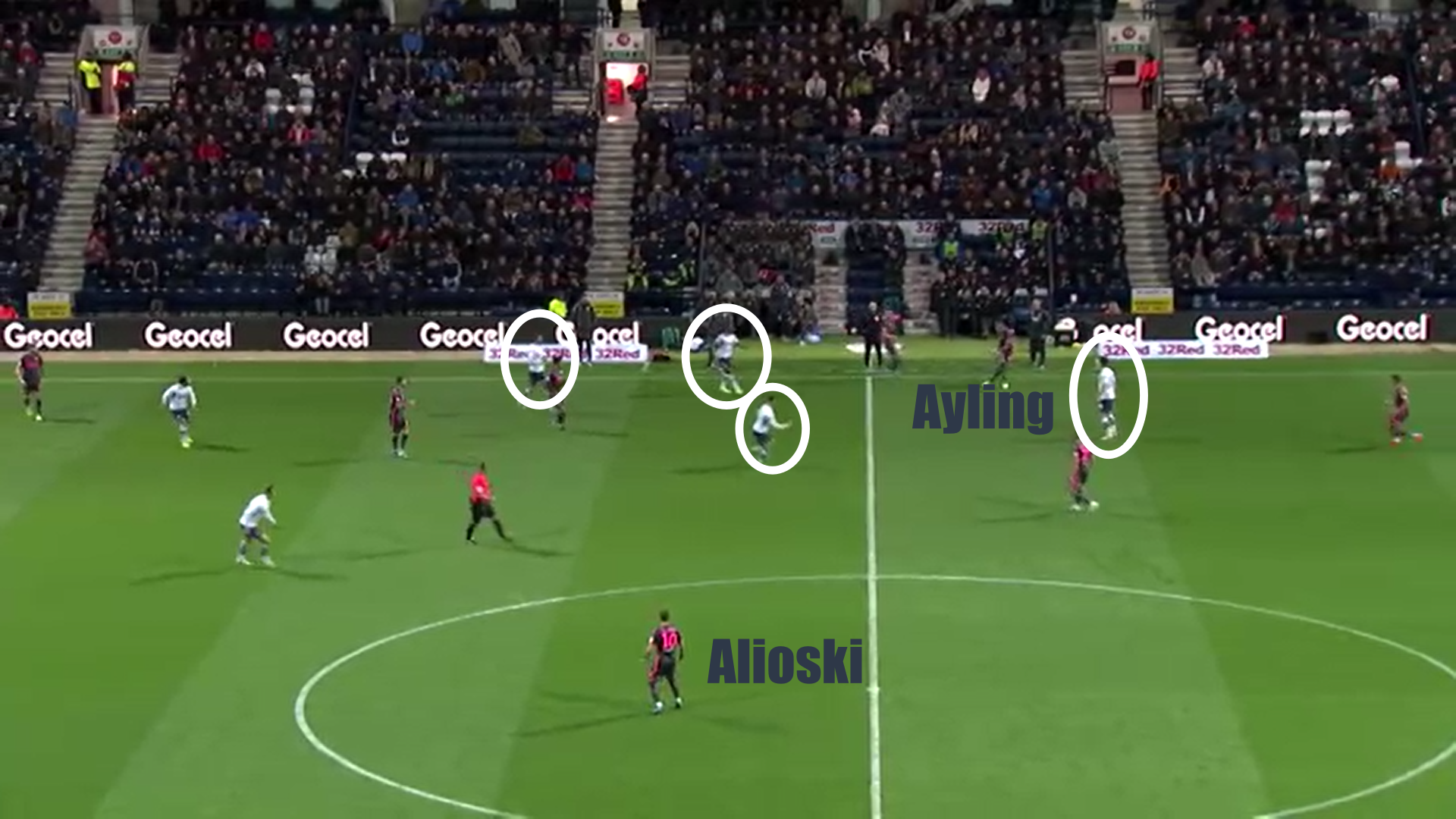 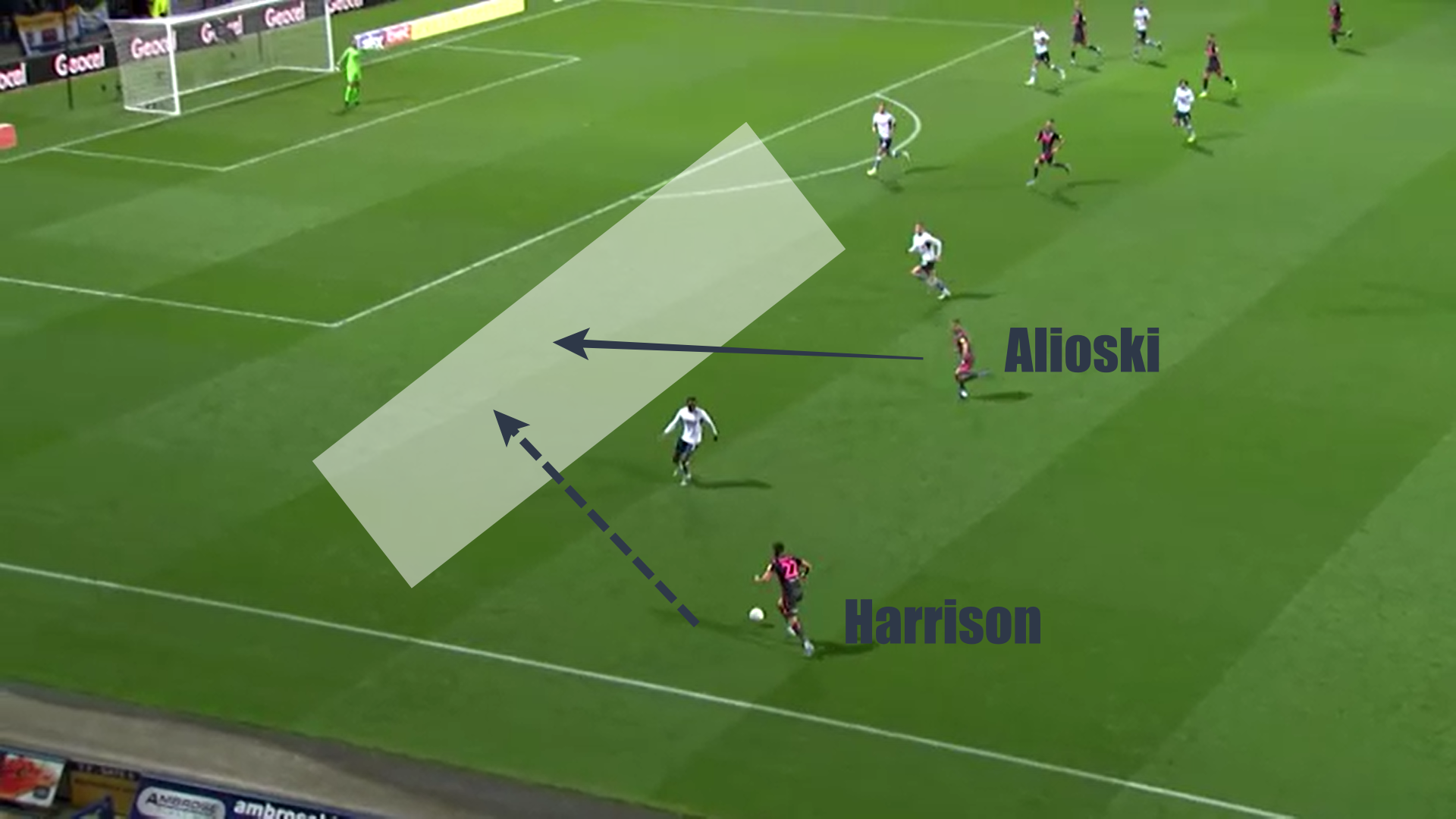 The positioning of Alioski must also be noted here, with the Macedonian initially situating himself in an area from where he can influence in both attack and defence.

To start off with, he moves into the half-space in order to provide both defensive balance should Preston break through the area, but also to give another potential option on the ball. However, as soon as the ball is switched out to Harrison, from where he is he can also dart beyond the Preston full-back and create a 2 v 1 with the winger as they look to overload out wide, as indicated above.

Bielsa is an expert at creating smart, tactically astute and aware teams capable of overloading opponents in all areas of the pitch – which has been indicated in the examples above.

This was a fascinating match between two even teams, both of which will surely be at the right end of the table if they continue to put in the kind of displays they have done so far. Preston and Neil must be given credit for nullifying Leeds’ potency going forward, with the game playing out to be an intriguing tactical battle.