Hamburger SV were beaten by VFB Stuttgart in the DFB Pokal by a 2-1 scoreline. The result was a stark contrast to the weekend when the same fixture saw Hamburger thrash Stuttgart 6-2 in the 2.Bundesliga. Two penalties in the first 20 minutes saw both sides go into the break at 1-1 and the cagey nature of the game continued until full-time. A late winner in extra time from Hamadi Al Ghaddioui proved to be the difference and sent Stuttgart into the next round of the cup. This tactical analysis looks at the tactical approaches of both sides. 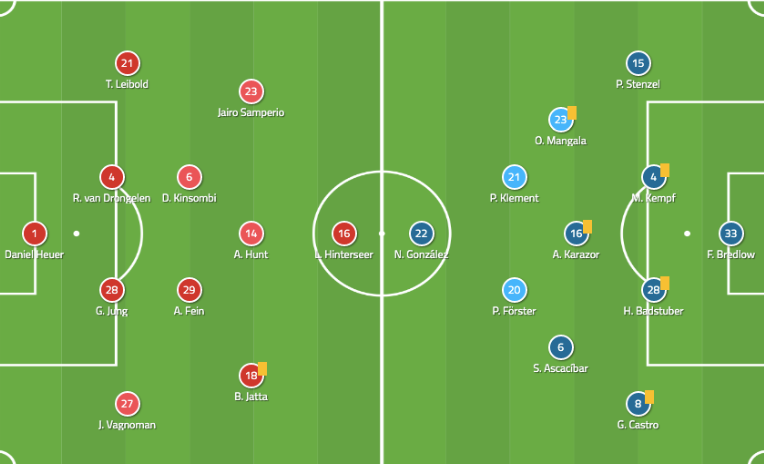 Hamburger lined up in a 4-2-3-1 formation with Lukas Hinterseer leading the attack, while Jairo and Bakery Jatta played on the wings. In midfield, Adrian Fein played along with David Kinsombi as part of a double pivot. Gideon Jung and Rick van Drongelen played in defence with Josha Vagnoman and Tim Leibold as the full-backs.

Stuttgart opted for a 4-3-3 formation with Nicolás González playing as the striker along with Philipp Klement and Philipp Förster on the wings. Orel Mangala and Santiago Ascacibar were the more advanced midfielders in the trio playing ahead of Atakan Karazor.

Stuttgart were the far better side on the night. The visitors, perhaps hurting from their humbling on the weekend, played with a great deal of intensity and commitment for the entirety of the game. While attacking opportunities were few and far between, Stuttgart controlled the game and had Hamburger on the back foot for most of it. Stuttgart’s tactics were to press high up the pitch starting from their forwards. By doing this effectively, they ensured that Hamburger struggled in their transitions from defence to attack. Stuttgart’s pressing was concentrated on ensuring that Hamburger’s central midfielders either did not receive the ball or did not have the time to make a forward pass. On various occasions, the home side’s midfielders can be seen left isolated and this forced Hamburger into less-effective approaches to get the ball forward.

Stuttgart’s midfielders played an important role in acting as a second line of defence but also in facilitating the attack. With Ascacibar and Mangala playing together, the visitors had the energy and stamina in the centre of the pitch to intercept passes, make tackles and ensure mobility. This mobility was especially important in helping the full-backs defend against Hamburger’s only outlet which was their wingers. Playing a more expansive brand of football, Stuttgart’s midfielders were not afraid to maintain wider positions considering there was virtually no threat from the opposition through the middle. This also helped to facilitate some slick passing sequences and exploit the space between the Hamburger lines.

Stuttgart’s defensive pairing have to be given credit for the way they dealt with Hamburger’s physicality but still managed to maintain their high defensive line with minimal errors. This defensive line acted as the foundation for Stuttgart to press the opposition and play out from the back. The fearless approach of both central defenders enabled them to comfortably evade any pressure by Hamburger’s attackers. Stuttgart had 55% of the possession, indicating how they dominated proceedings even while playing away from home.

Stuttgart’s attacking sequences relied on the width their wingers provided in the buildup. The next sequence would usually have the midfielders arriving in the box in order to facilitate crosses from the wings. Tim Walter’s side had seven shots on target but ought to have been more clinical in their finishing. The visitor’s wingers caused a lot of issues for Hamburger. They did so both defensively and stifling their attack by preventing their full-backs from pushing up the pitch. Stuttgart’s penalty came from a pass played over the Hamburger defensive line.

Hamburger, on the other hand, were very poor on the night. Although they managed to deal with the majority of Stuttgart’s attacks, Dieter Hecking’s side offered a bare minimum in attack. Stuttgart can take credit in part for this but the home side also failed to adapt themselves to the roadblocks their tactics faced.  Due to the visitors’ intensity, Hamburger were restricted to playing the ball long and struggled to beat the press. They were also quite tentative in their approach to the game, taking few risks and not committing players to attack when they did have possession of the ball. Jairo and Jatta were the only Hamburg players given any freedom on the ball and on most occasions, only the attacking trio were seen near the Stuttgart goal, even when Hamburger transitioned from defence to attack.

Hamburger’s problems originated from their static midfield. As mentioned above, Stuttgart made a conscious effort to keep the home side’s double-pivot as disconnected as possible and both Kinsombi and Fein accentuated this by not positioning themselves intelligently in spaces and situations where the ball could have been progressed. As a result, they frequently received passes facing their own goal and were forced to pass it back to Van Drongelen or Jung. This would then result in the ball being cleared forward in the hope that either Jairo or Jatta would win the aerial duel and get to it. The lack of creativity and attacking impetus cost Hecking’s side and was quite odd given they had just put six goals past the same opposition a few days earlier.

The home side were victims of their own lethargy and the result reflected the same. Hamburger had just three shots on target and generally did not look like scoring.

As this analysis has shown, VFB Stuttgart certainly made amends for their performance over the weekend by beating the same opposition away from home in the DFB Pokal. Through their tactics, Tim Walter’s side certainly took the game to the opposition, capitalizing on Hamburger SV looking tentative and slow in possession and their approach to attack. In the end, the result was justified given Stuttgart’s dominance and they could have had more goals if they were more clinical in front of goal. For Hamburger SV, the result will be disappointing given how enjoyable a strong cup run can be but Dieter Hecking’s side are still first in the league and can focus on making it a successful season in that regard.