Thirty-two teams remained fighting as the FA Cup fourth round kicked off this weekend. Tranmere Rovers previously knocked out Premier League side Watford days earlier and were immediately thrown into a battle with Manchester United. United narrowly eliminated Wolverhampton Wanderers the previous week but aimed to regain some positive form after suffering two Premier League losses in a row.

After analysis, we see that United deployed in an untypical formation with off-the-ball attacking movements from defenders, midfielders, and forwards alike. Tranmere used counter-attacking tactics in an effort to remain defensively stable, while also creating damage in the form of goals. How did Manchester United walk into their halftime talk ahead with a score of five to zero? This tactical analysis will tell us exactly what happened. 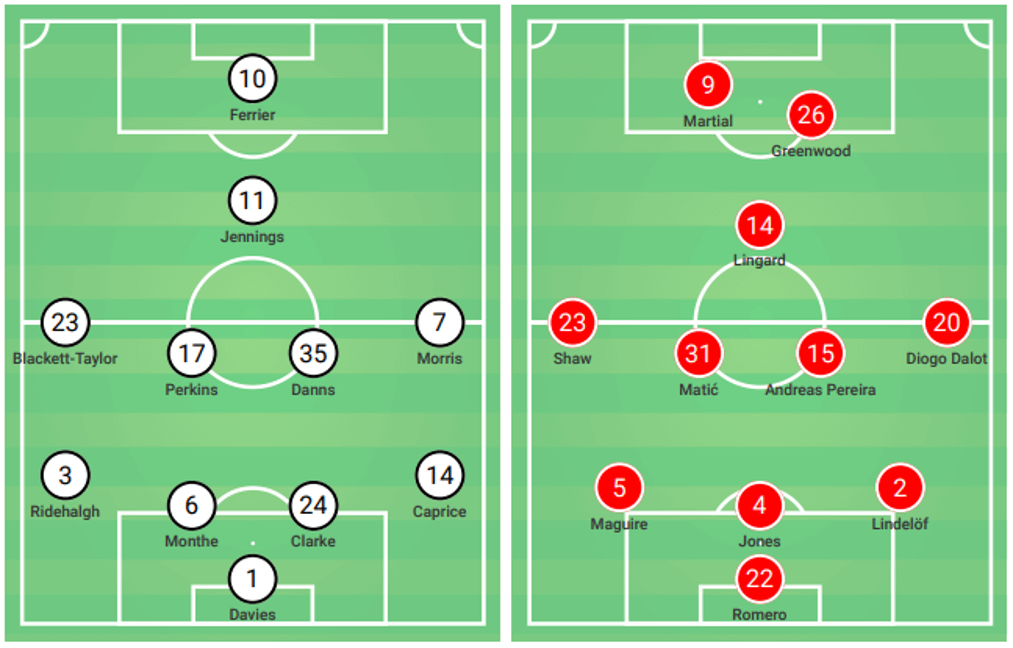 When in the attacking third of the pitch, Manchester United sought to use defender Harry Maguire as an offensive weapon. Although he is already considered a skilled 1 v 1 defender, Maguire is also a quite capable 1 v 1 attacker.

At this moment, Maguire would push up into the midfield line in the left half-space ready to receive the ball and penetrate into the forward space. Luke Shaw, as we’ll discuss later, created width in attack by pushing high and wide. Shaw’s positioning, along with the central striker, pinned the Tranmere defensive line back and helped maintain space for the forward progressing Maguire.

Ten minutes into the match, United had settled into the attacking third and were searching for space to exploit. After an unsuccessful attack up the right flank, Andreas Pereira chose to switch the point of attack and move the ball to Maguire.

Maguire, positioned in the left half-space, immediately penetrated forward upon receiving the ball. Tranmere’s defensive block struggled to slide horizontally across the pitch to smother the new United attack. 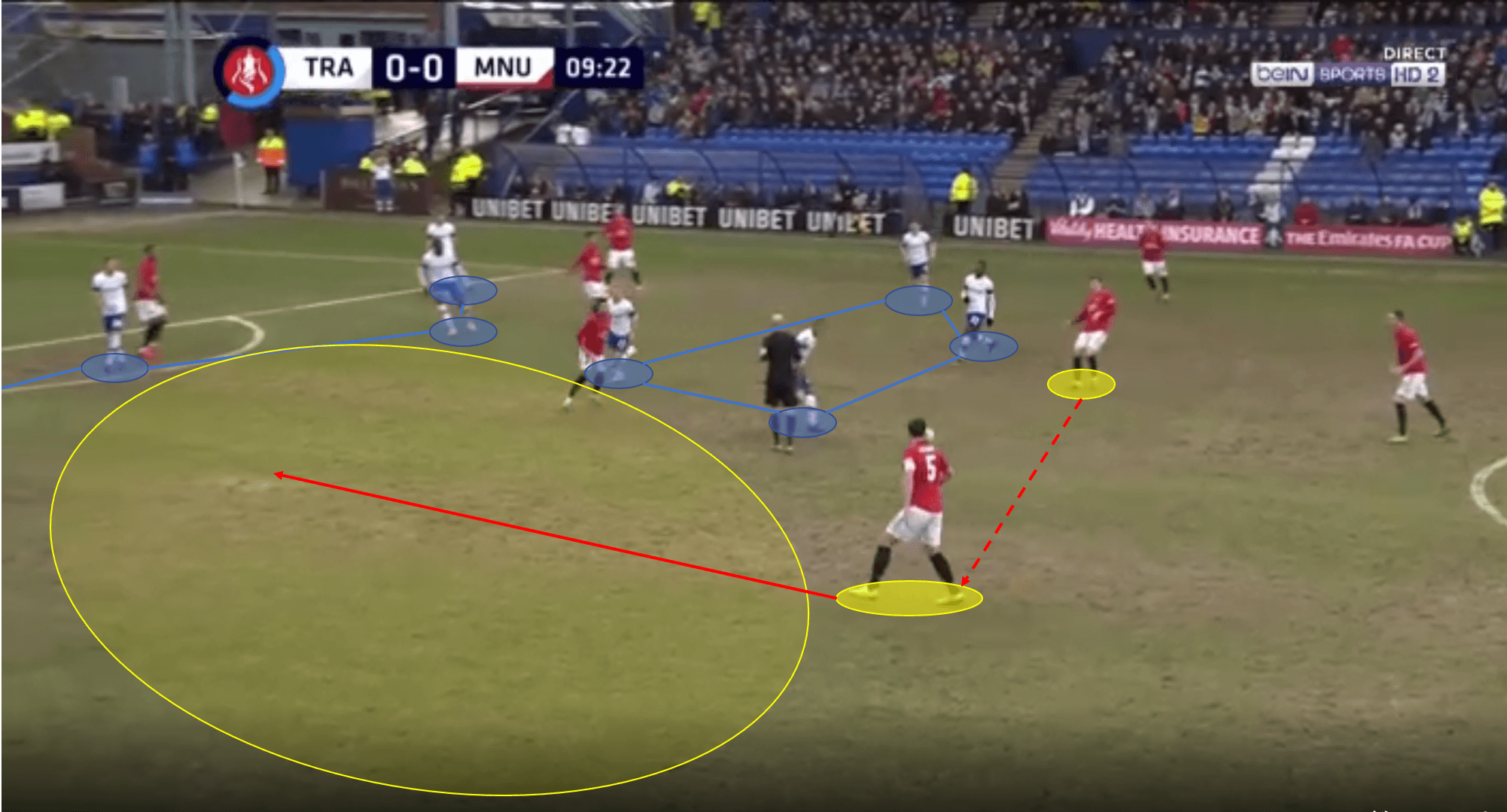 Tranmere central-midfielder, David Perkins, was able to move in between Maguire and the goal to create a 1 v 1 situation. Maguire did not hesitate to unbalance Perkins and push past his left side. He then ripped a direct shot into the upper right corner and put United up one goal. 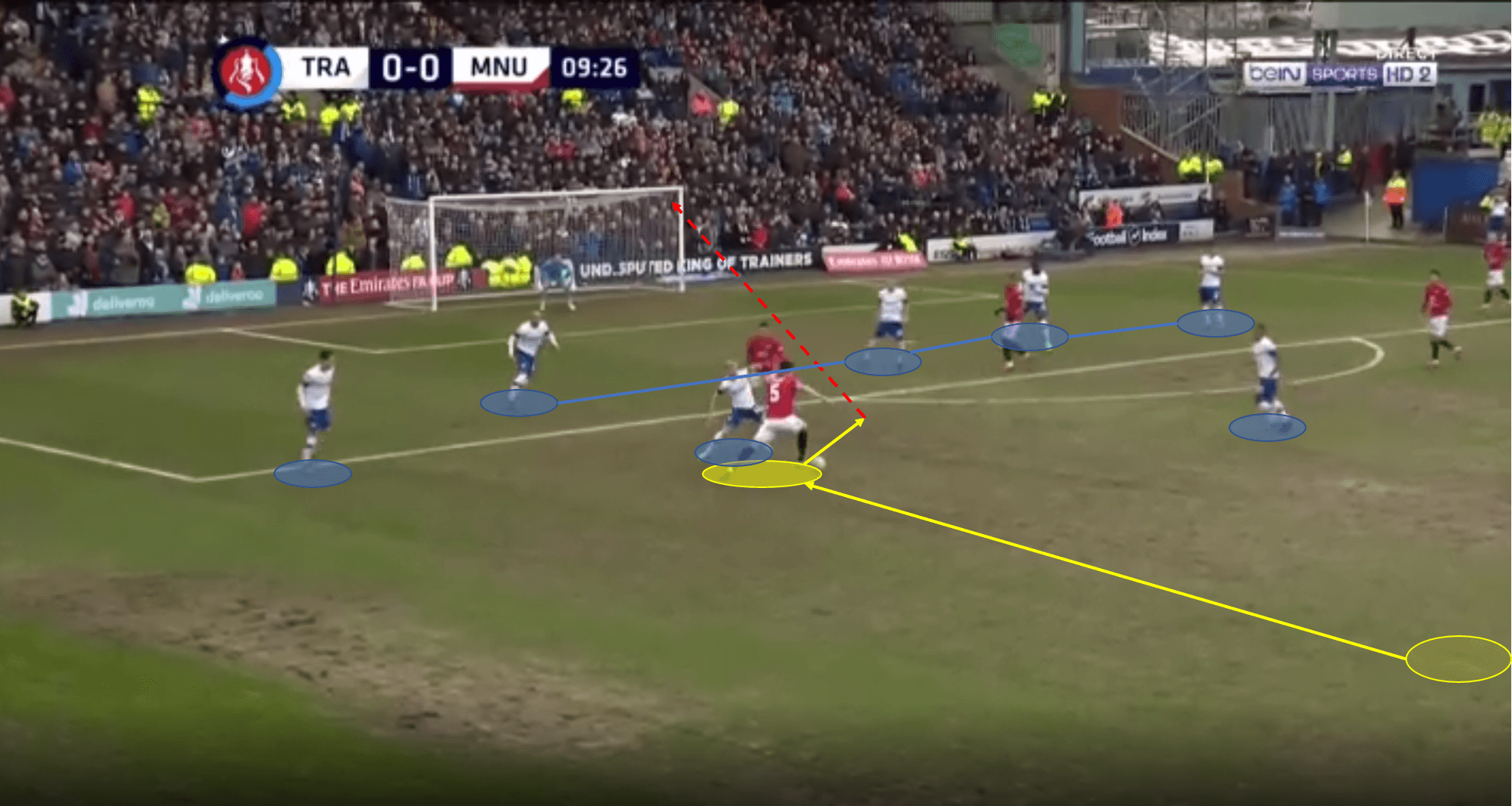 Notice how the moment that Maguire conducts his attacking 1 v 1, Jesse Lingard is waiting to receive in a dangerous central pocket of space directly in front of Maguire.

Almost exactly six minutes later, a very similar situation plays out. United have attempted to play up the right flank, only to be smothered by the sliding Tranmere block. Once again, the ball is circulated to Maguire who is waiting in the left half-space.

Maguire penetrates forward again, but this time Tranmere have two midfield players (Neil Danns and Kieron Morris) ready to close down and win the ball. 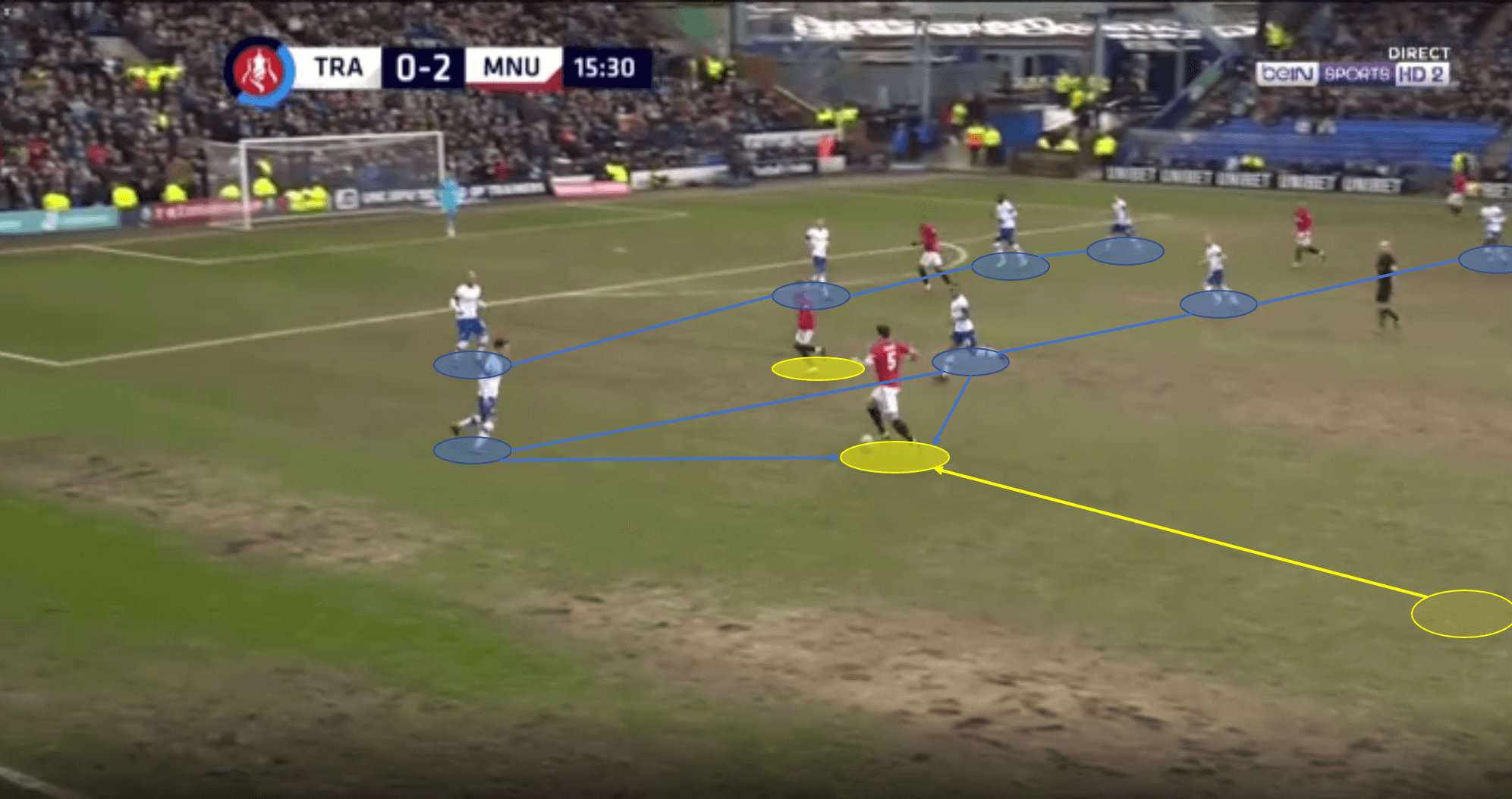 Maguire continues forward into a 1 v 2 situation, knowing that Lingard will be positioned in his pocket of space in front of the Tranmere defensive line. Maguire holds the ball until he has completely drawn in Danns, Morris, and right-back Jake Caprice. Maguire releases the ball to Lingard who opens up his body to the goal and immediately places the ball into the top corner to put United up by three goals. 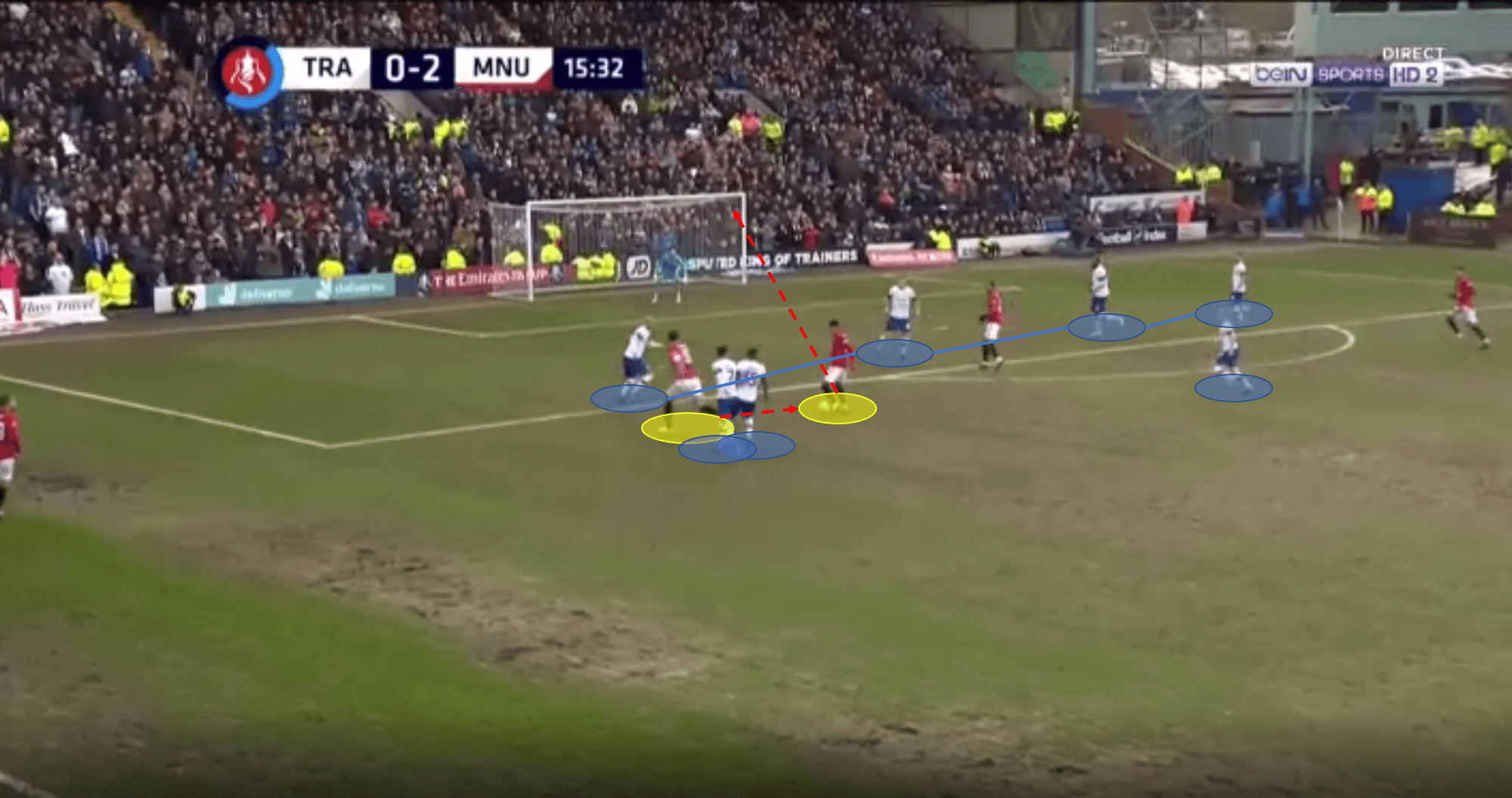 By using piercing runs from Maguire, United were able to penetrate towards the Tranmere box. Arriving at the box, United were then able to use multiple attacking options within the moment to create quality chances and goals.

As a relegation-threatened League One side, Tranmere were quite aware that it would be difficult to go toe to toe with the visiting Red Devils. Tranmere employed a counter-attacking tactical model in the hopes of maintaining a strong defensive structure while also creating quick and dangerous chances on goal.

Tranmere directed the majority of their counter-attacks to the left flank. Once the ball was moved to the left flank, Tranmere sought to draw the United defensive unit out of the central area with fast and aggressive forward runs. Once United had been disorganised, Tranmere would cross the ball to awaiting attackers in the United box.

As we can see in the pass map below, Tranmere also directed most of their passes to the left flank. When gaining possession of the ball, left midfielder Corey Blackett-Taylor (23), would immediately move to find space in front of or behind the Manchester United defensive line. Blackett-Taylor’s runs were so forward and aggressive, we can see that his average position for the match is in line with the starting forward Morgan Ferrier (10). 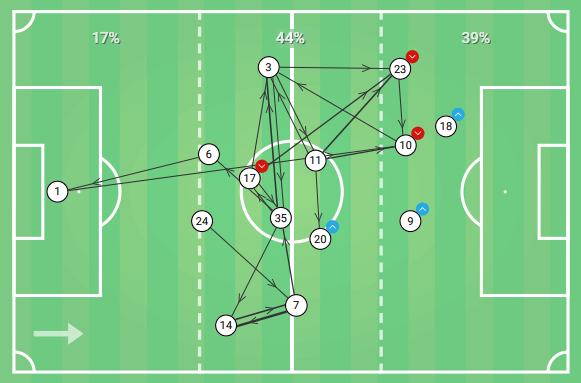 Once the ball had quickly made its way to Blackett-Taylor, he would penetrate towards the corner flag in the hopes of drawing over the United defensive and midfield lines. This would leave space in the central channel that could be exploited with a well-placed cross. Below, we see that 91% of Tranmere’s crosses in the first half came from the left flank, a majority of those coming from Blackett-Taylor. 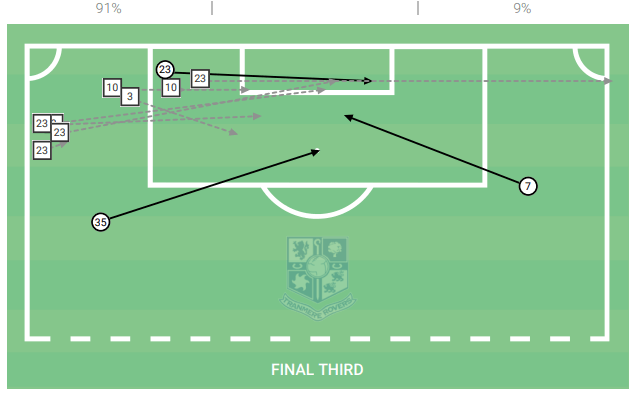 In the opening minutes of the match, we see that Tranmere created a chance on goal with this counter-attacking tactic. Blackett-Taylor and Ferrier have taken the ball deep down the left flank, and this is when almost the entire Manchester United defensive and midfield lines have been drawn away from the central channel in the Tranmere attacking third.

Only Shaw remains as an obstacle on the receiving end of a cross. Unfortunately, Tranmere only have one attacking player (Morris) in the United box. The cross is eventually recovered by United and Tranmere retract back to their defensive shape. 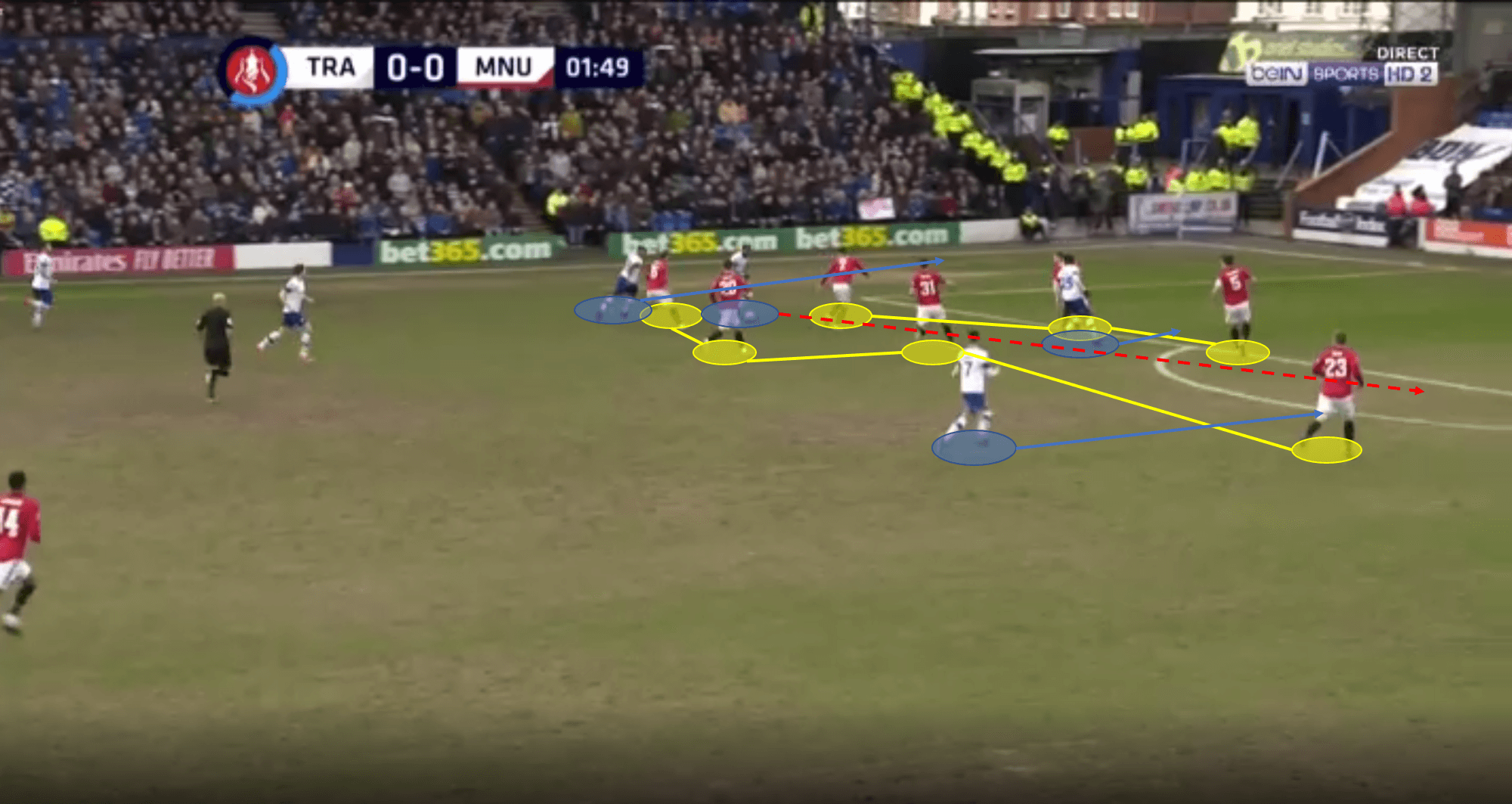 By focusing counter-attacks down the left flank, Tranmere sought to manipulate the Manchester United defensive unit and create space in dangerous areas. Unfortunately for Tranmere, this tactic was rarely effective.

For much of the 2019/20 campaign, it can be said that United favour a 4-2-3-1 formation. Only on two occasions have United started a match with a back three: against Sheffield United and against FK Partizan Belgrade. Both matches produced unconvincing results at best. With that in mind, it was interesting to see United deploy a 3-4-1-2 in attack.

Width in attack was provided by wing-backs Shaw and Diogo Dalot, who both also made diagonal interior runs depending on the movement of the strikers. Dalot and Shaw’s high positioning was also used to pin back the Tranmere full-backs and restrict the Tranmere defensive line from moving forward to pressure attackers between the lines.

Strikers Mason Greenwood and Anthony Martial worked together by using dropping movements into the midfield to aid progression. Greenwood and Martial also maintained a high position to pin back the Tranmere centre-backs, and the strikers were often found alternating in these tactical duties throughout the match.

Jesse Lingard roamed horizontally between the Tranmere midfield and defensive lines, seeking to aid in progression to dangerous areas of the pitch. Earlier we saw that Lingard’s movements between the lines helped in aiding and executing successful shots on goal with Maguire.

Within the opening United possessions, we saw Martial dropping deep into the midfield line when Matic, Pereira, or the defensive line were in possession. Below we can see that Martial has dropped all the way to the left flank from his high central position.

By doing this, the Tranmere line has shifted to focus on Greenwood, who has also shifted to the left flank. Tranmere now have a massive and exploitable gap between their centre-backs. Shaw plays the ball to Martial and immediately penetrates forward towards the open space. Martial quickly plays the ball into the attacking run of Shaw who continues forward and this leads to a chance on goal. 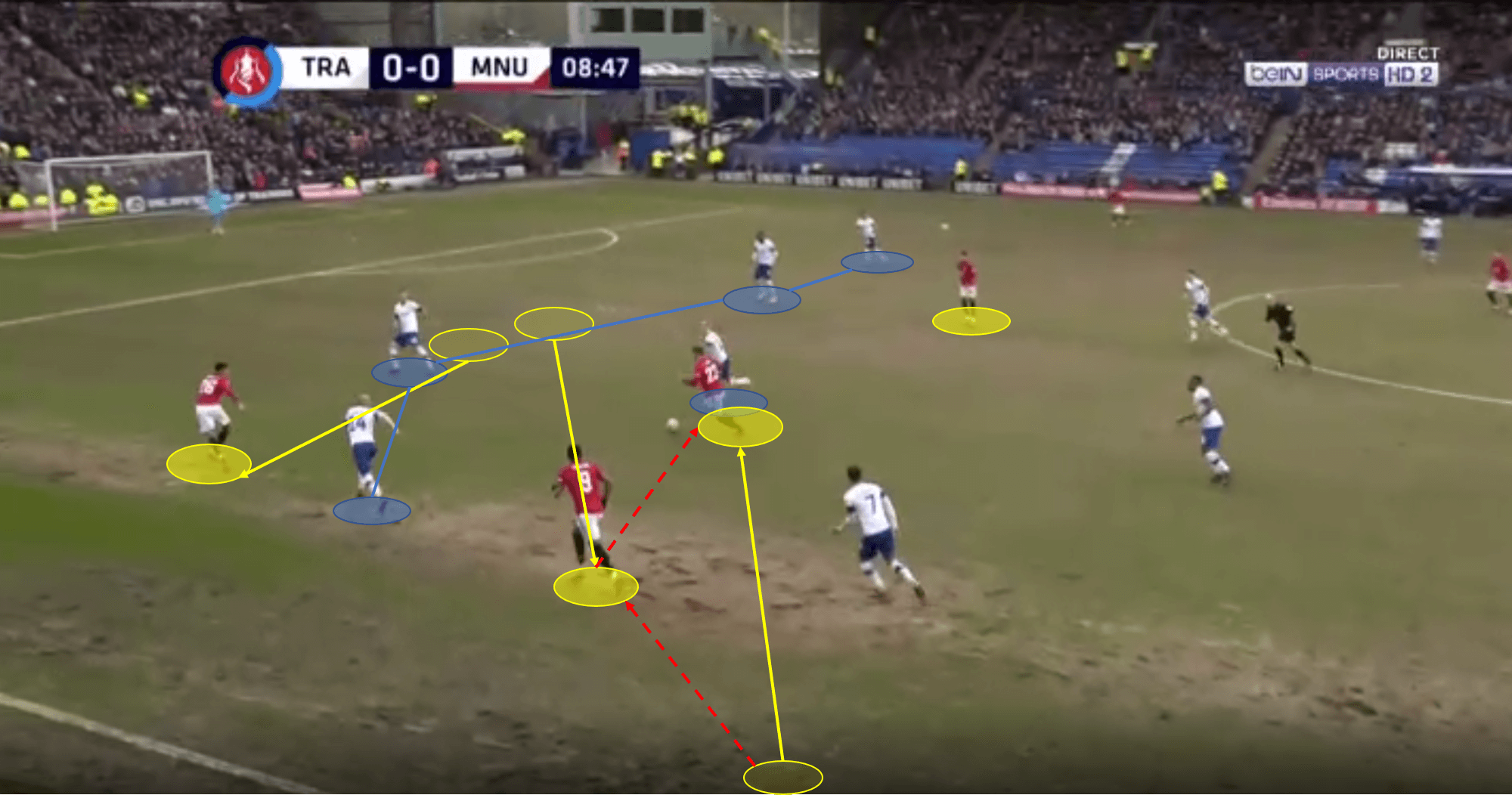 This movement also played out with Dalot on the right side of the pitch and directly led to United’s second goal. Martial has dropped into space towards the right flank. By doing this, Martial has also drawn Tranmere centre-back Emmanuel Monthe with him, so Dalot sees that there is now space in the Tranmere defensive line to exploit. 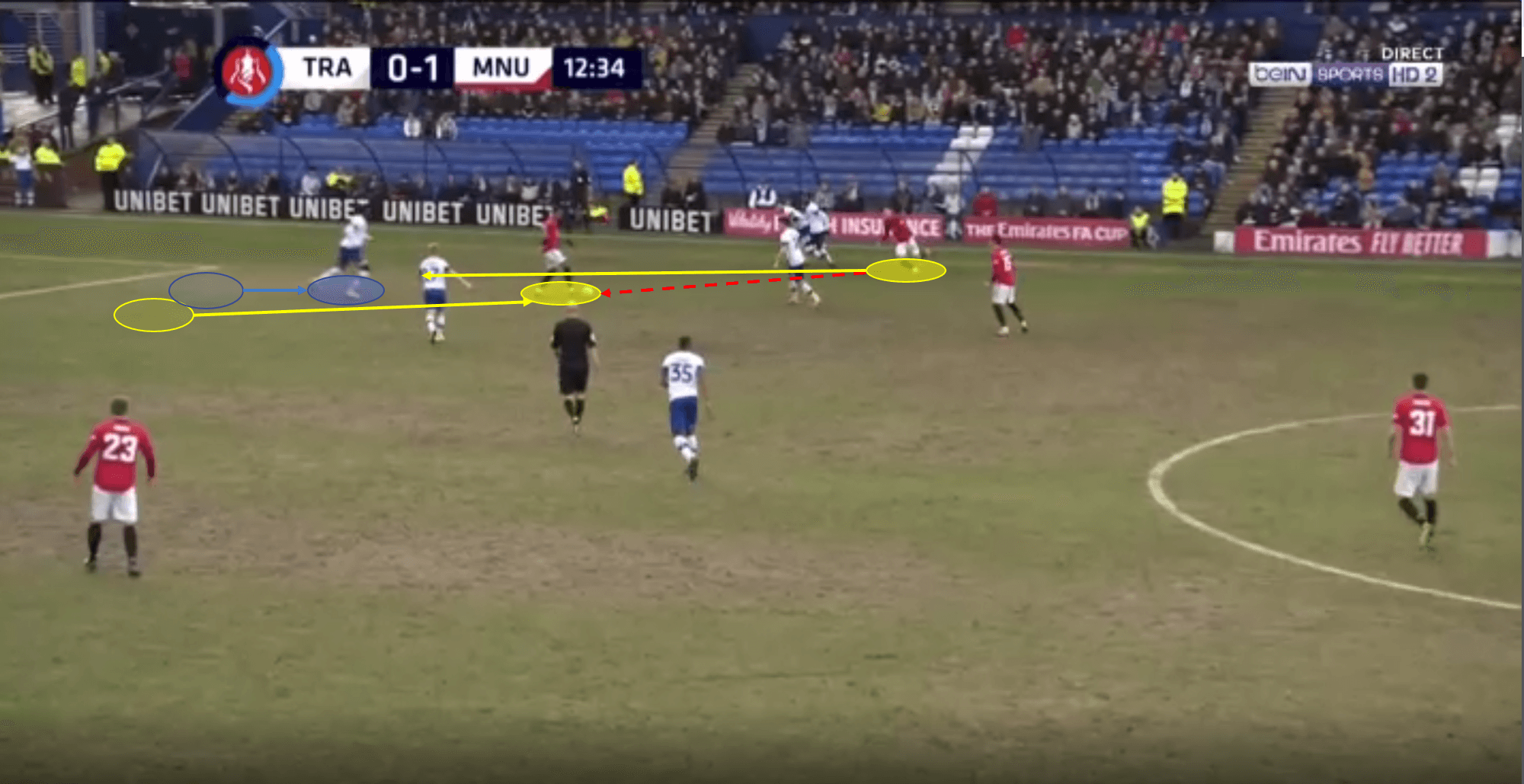 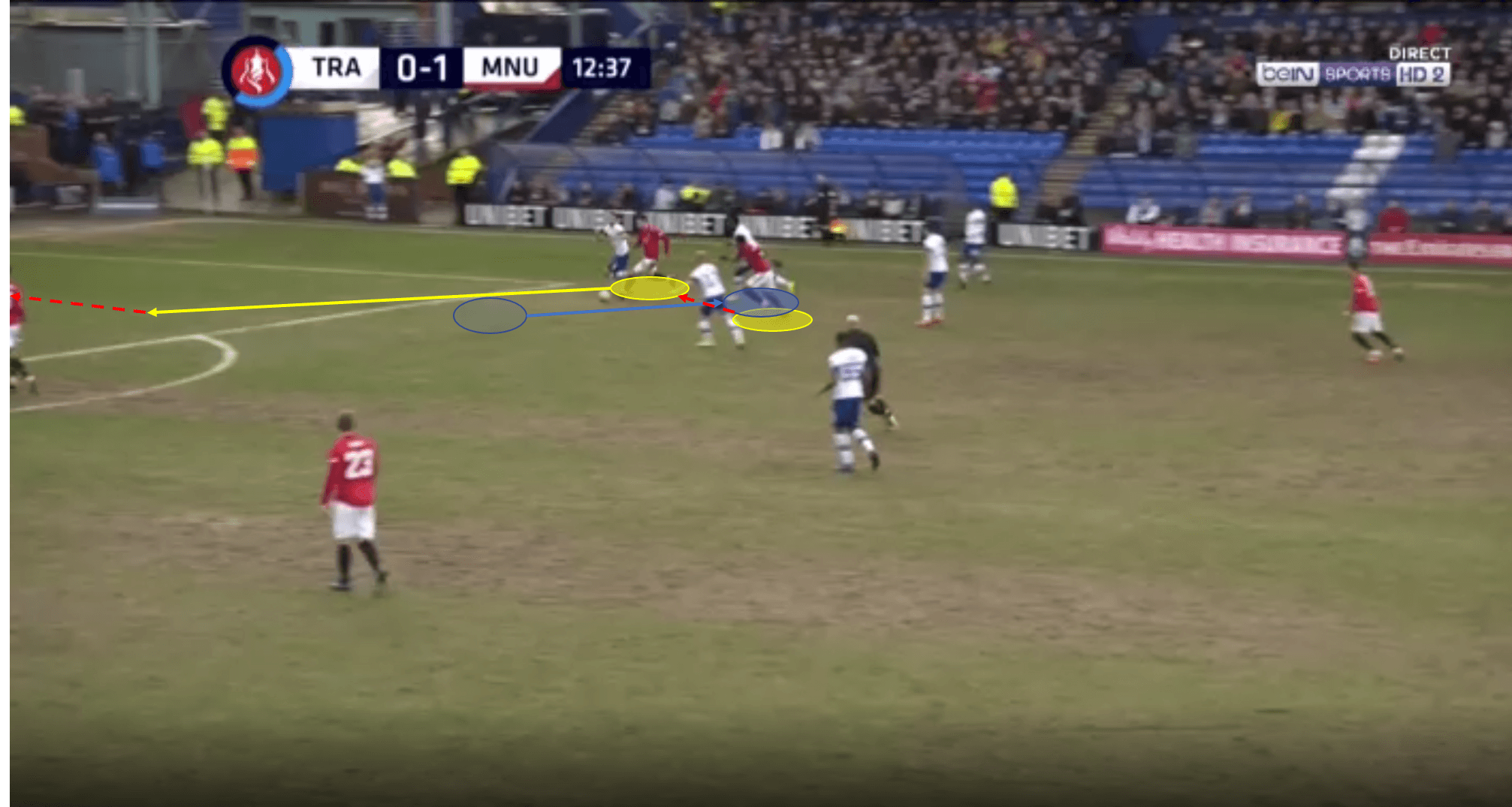 By applying dropping movements from the strikers and attacking runs from the wing-backs, United were able to set up and create quality chances on goal. This off-the-ball tactical movement helped to create, manipulate, and exploit gaps in the Tranmere defensive shape.

In the end, United left the pitch with a completely dominant performance. This was much needed after a very bitter defeat to Burnley at Old Trafford some days earlier. Tranmere return to their League One fixtures with the objective of remaining within the league in the upcoming 2020/21 season.