The performance of Manchester United was beyond satisfaction recently. In the Premier League, they kept a five-point margin with Chelsea, still yet to reach the top four. Before the match, they lost three out of six in the new year. Chelsea did not win against Arsenal despite their numerical advantages and Manchester United were looking for chances to reduce the gap.

Burnley did not have their most comfortable season since their promotion to the Premier League. However, they won some vital games – for example, such as Bournemouth, Watford, Newcastle, and the most recent victory was vs Leicester City. They travelled to the Old Trafford and took all points from United.

In this tactical analysis, we will reveal how Burnley obtained all points. It is an analysis that focuses on tactics.

Ole Gunnar Solskjær lined up his team in a 4-2-3-1 formation. Given the recent outstanding performances of Juan Mata and Nemanja Matić, both players started. Andreas Pereira was given a chance and started ahead of Jesse Lingard. Marcus Rashford suffered an injury recently and was sidelined along with Scott McTominay and Paul Pogba. Anthony Martial started as a lone striker.

Sean Dyche’s Burnley played in a 4-4-2. Charlie Taylor was the left-back; Jeff Hendrick and Dwight McNeil were playing as wingers; Chris Wood and Jay Rodriguez partnered up front. 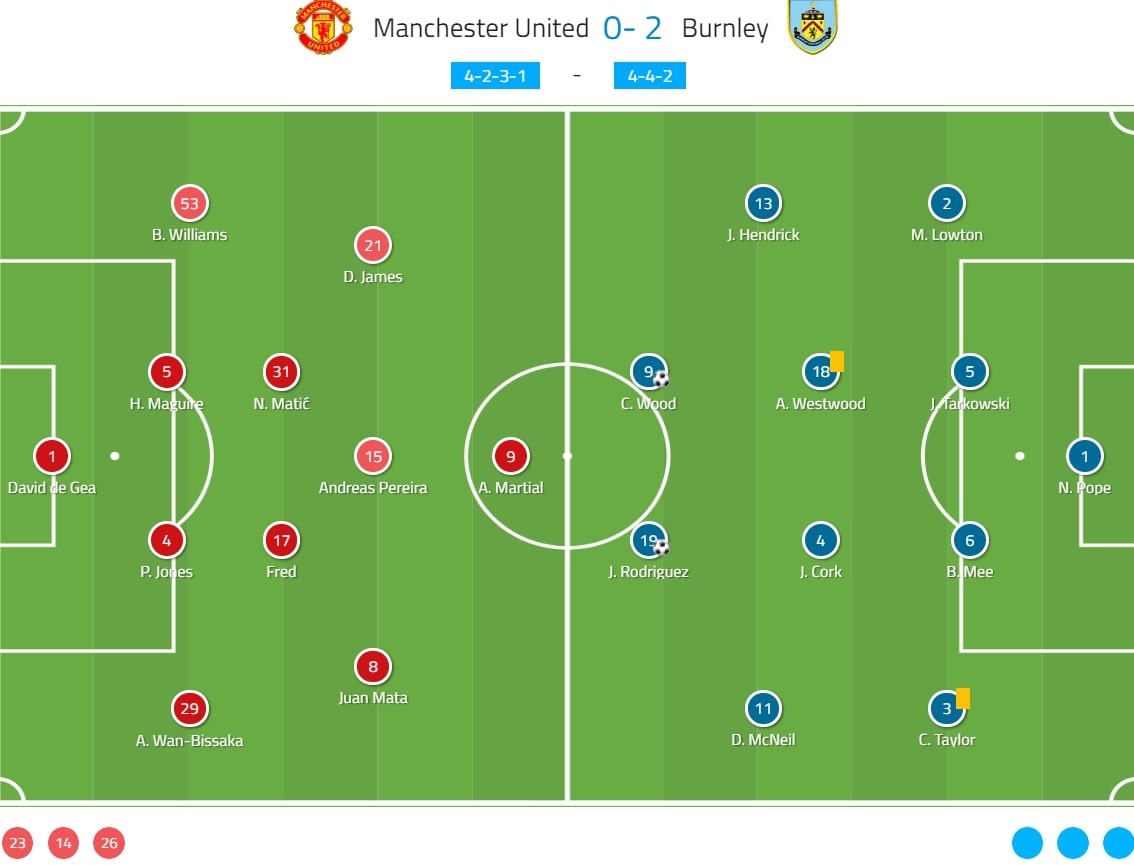 In this game, the away team had two phases of defence. When Untied were trying to play out from the back, they pressed high to disrupt the build-up. The build-up of Untied followed a similar pattern as they previously played. Two centre-backs and two pivots were involved. The positioning of the full-backs was a change, as both Brandon Williams and Aaron Wan-Bissaka positioned themselves higher up the pitch.

In order to match the numbers in the oppositions’ build-up, Burnley committed at least four players in the high press. Both strikers were on the centre-backs, while Jack Cork and Ashley Westwood took care of Fred and Matić.

Burnley did not mark their opposition too tight since they wished United players to pass the ball, and then they could intercept the poor passes. Both strikers defended a lot, the two handed seven interceptions, two clearances, and Rodriguez won eight defensive duels out of 13.

The following image illustrates the high press of Burnley. As we mentioned, when David De Gea was on the ball, Westwood, Cork, Rodriguez and Wood picked their targets to mark. With no short solution for De Gea, he played long, and James Tarkowski won the ball. 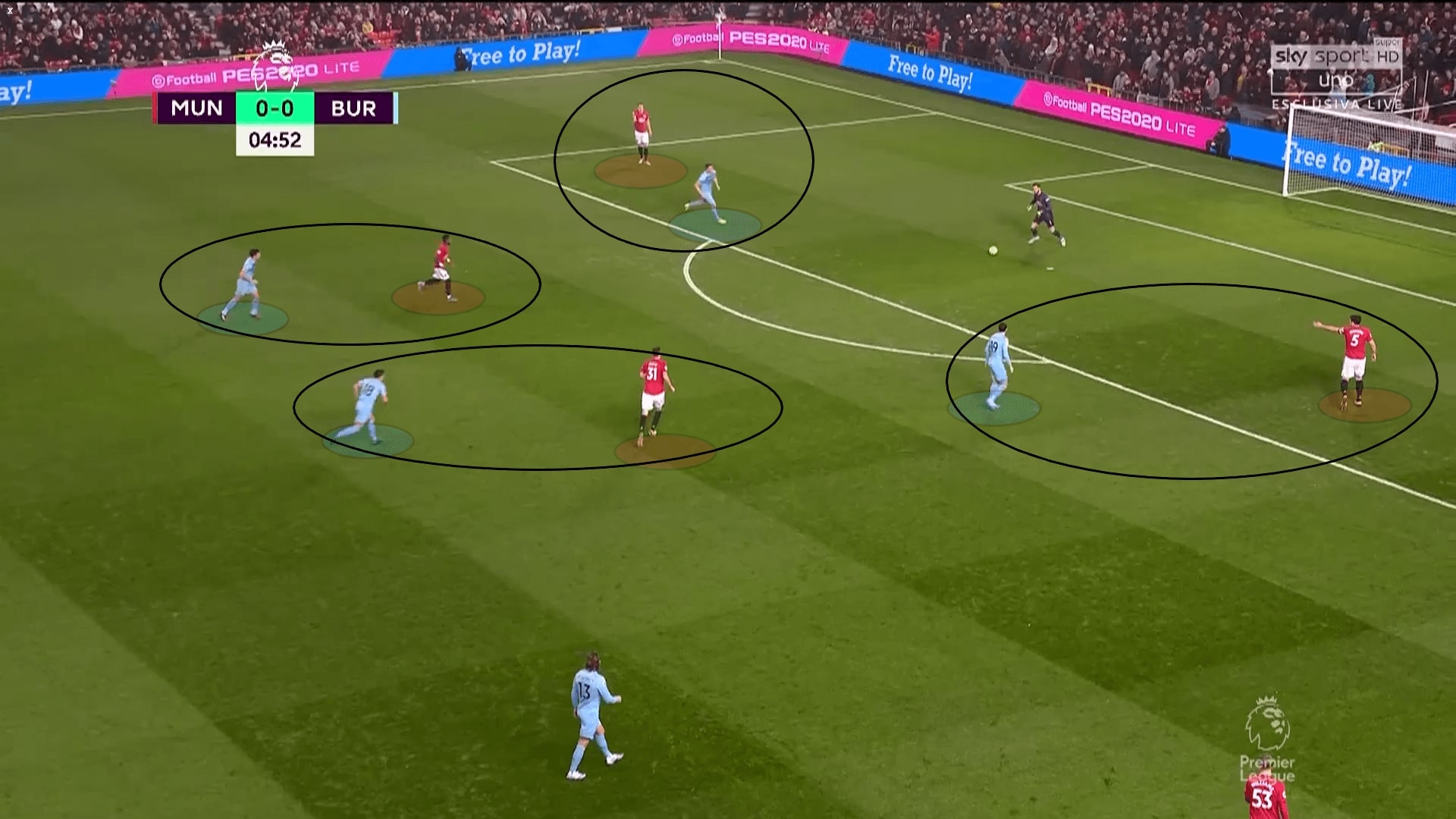 Below is another image showing the high press of Burnley. Cork pressed Fred from behind to force a return pass, then, continued his run to pressure Harry Maguire. Again, the four players contained Matić and Fred. Since Hendrick stepped out and Maguire was bounded by his body orientation, Williams was not an option.

However, this proved the press of Burnley was far from perfect. As, on this occasion, Maguire found Pereira, who stayed between the lines, and he was totally free to progress the ball. 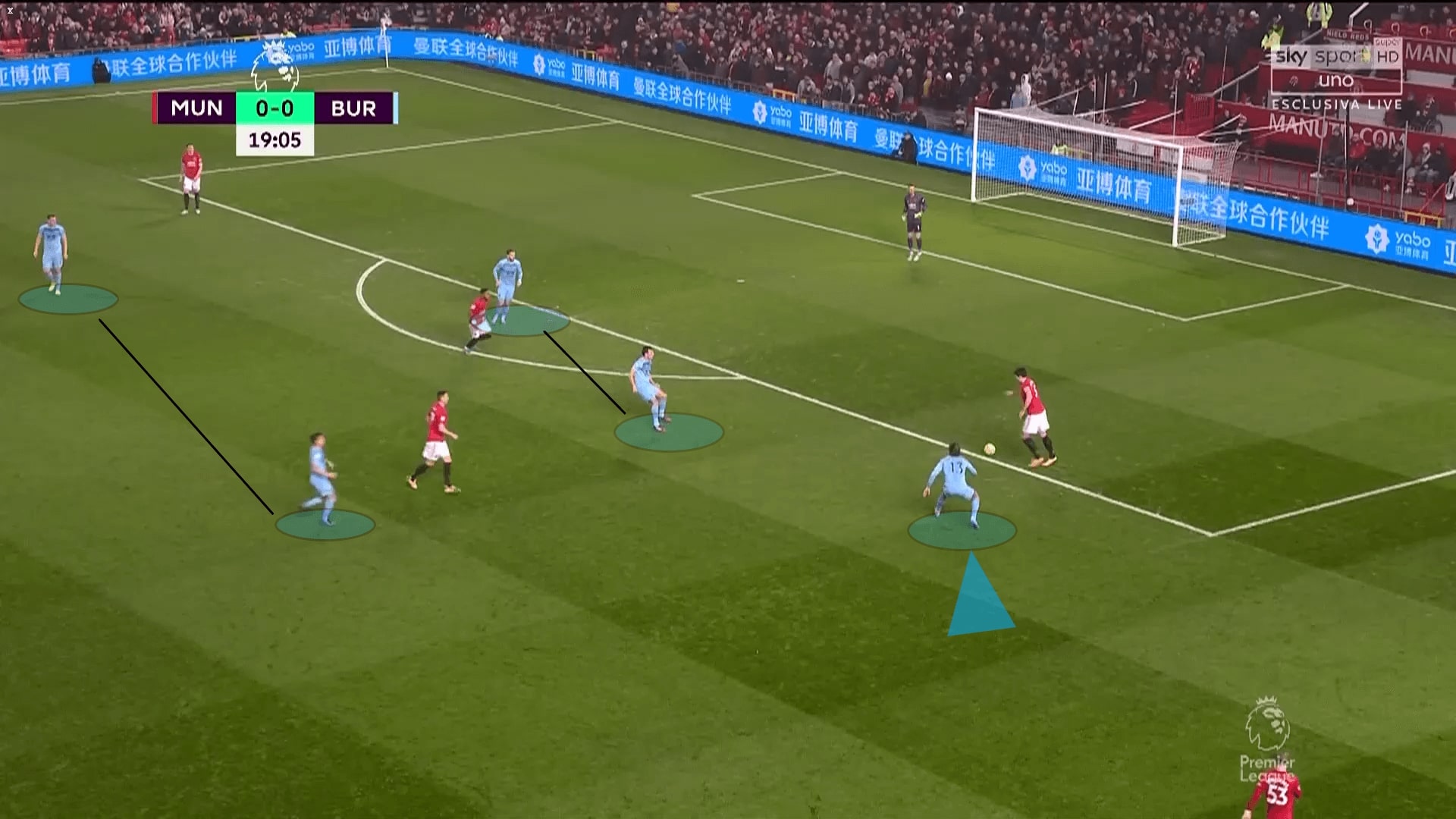 Since United attacked with their full-backs on the flanks, the main task of Burnley’s defence was to defend the wide area. When defending deep, Burnley stayed with a 4-4-2 low block, with the defenders staying compact. Given the lack of movements of United players, there was only one successful cross from the left flank in the first half.

The below image illustrates the block of Burnley. When Daniel James had the ball on the left flank, he confronted four players if he drifted inside. If he went down the flank, then, he was forced to use his weak foot. Both cases were not the idealist situation.

There were two more points to note. First, the left-back of United, Williams, stayed too deep and did not contribute in this attack, leaving James to play against four players. The second – between Martial and Mata, one was marked, and for the other, the passing lane was shut. United found themselves difficult to break Burnley’s compact defence. The away team players blocked six shots (29%) throughout the game. 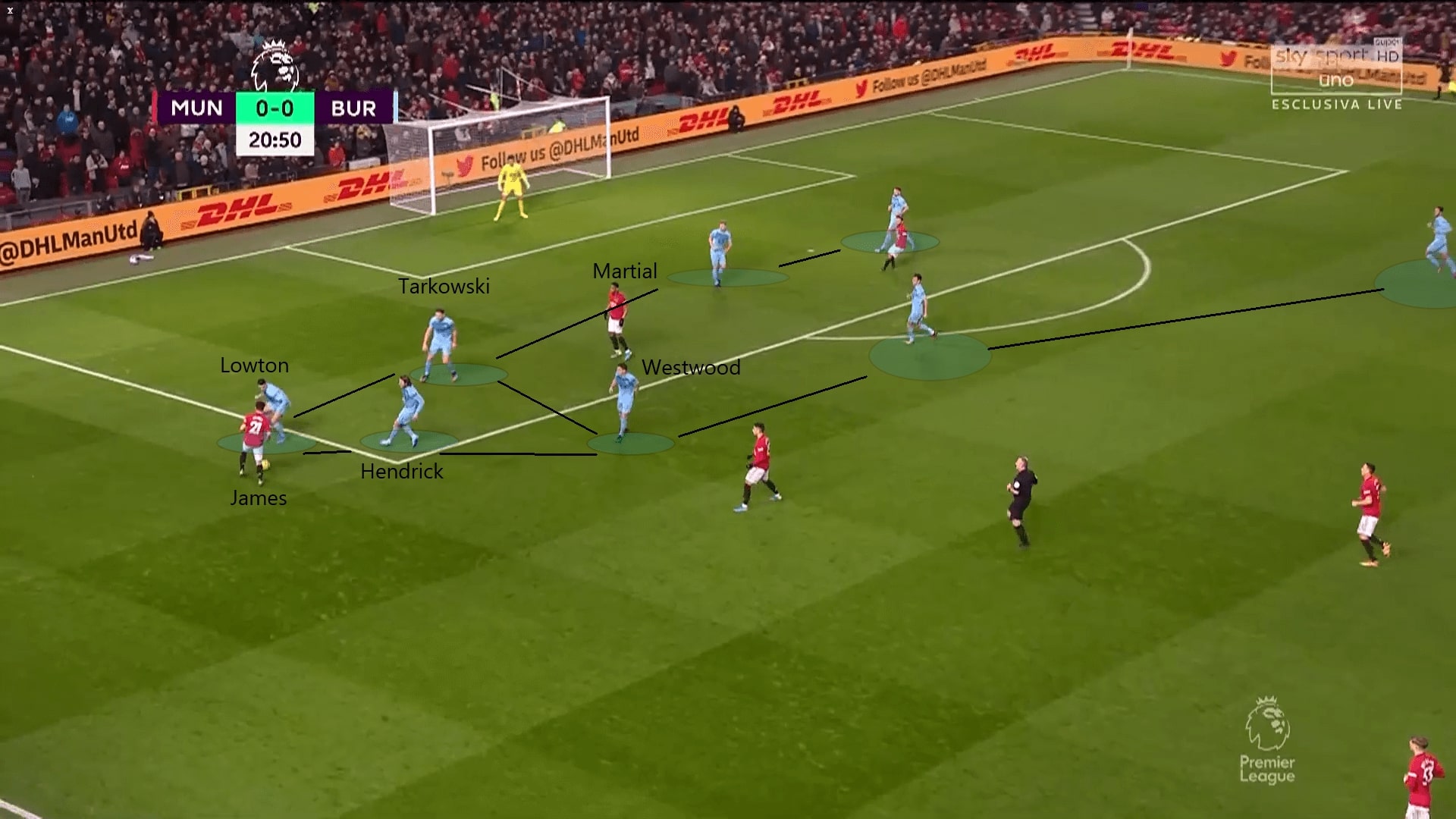 Below is an example to illustrate the discipline of Burnley’s defence. They sacrificed almost everything to keep the defensive line compact. On some occasions, the wingers defended as full-backs. This limited the space for United’s wide players.

In this example, Mata drifted inside, confronted Cork and Westwood. Meanwhile, Wan-Bissaka stayed wide to provide the width. McNeil had to drop to the defensive line and deny the United right-back as an option, therefore, Mata could not pass to Wan-Bissaka and he chose to play a one-two with Lingard first. Then, Burnley had time to react to when the ball was passed to Wan-Bissaka. 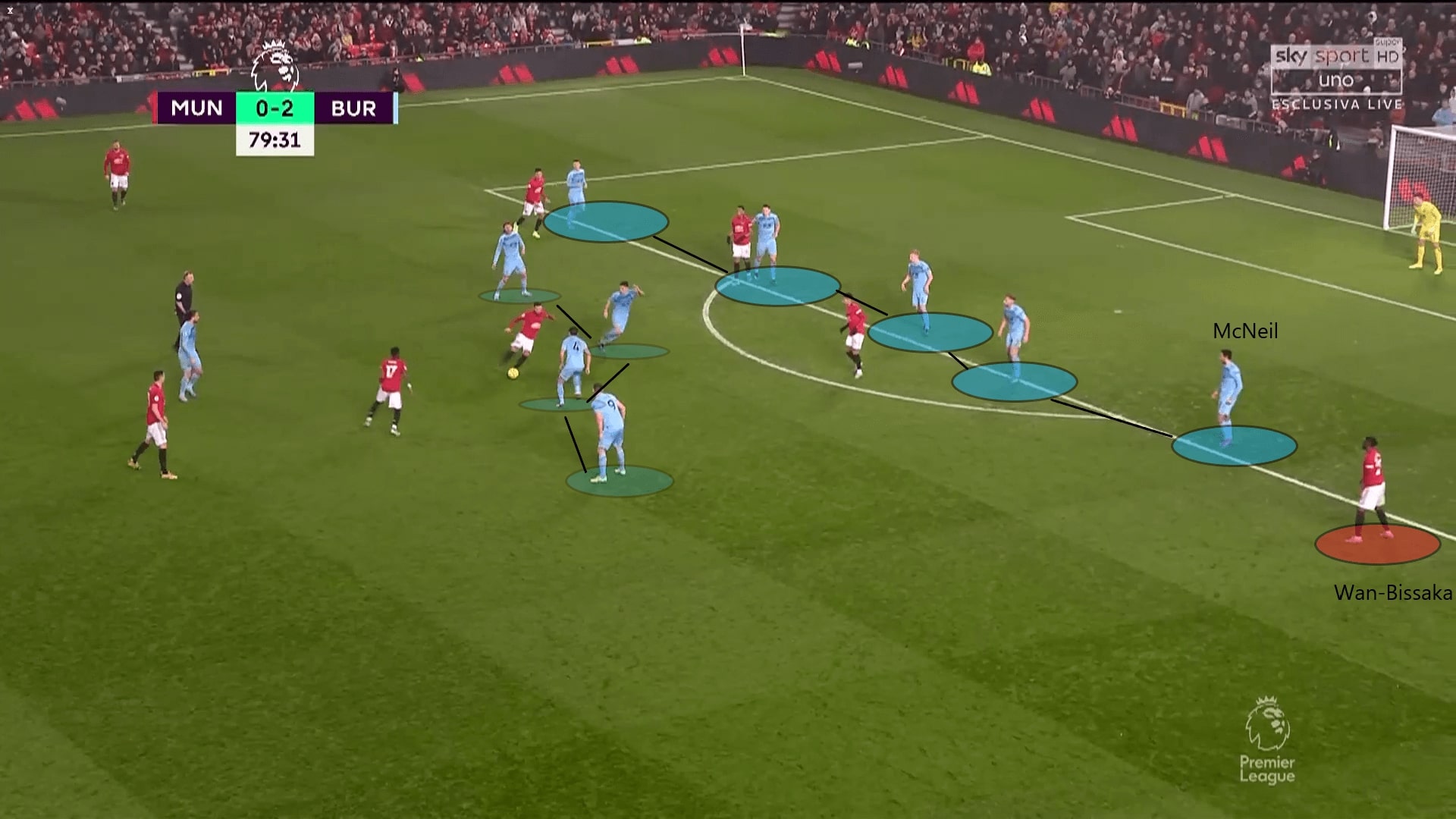 In this match, United changed their attacking approach slightly. They were less direct, and, had success in the wide-area. Below is the average positioning map of United as we use this to illustrate the general attacking shape of their approach.

We can observe that a large number of United players stayed at the centre, including both wingers, James and Mata. These two players played closely with Martial. In the wide area, Williams and Wan-Bissaka provided the width. It showed that United attacked the flanks with the full-backs, which we are going to explain below.

First, we explain how United transitioned their attack from the first phase to the final third. They played less direct vertical long balls to find the frontline players. With the technique of Maguire and the free players who dropped between the lines, Untied could play out from the back. The spaces occurred when Burnley defenders or midfielders did not step up to cooperate with a high press.

When United entered the final third, they looked for Wan-Bissaka on the flank. The below graph shows the passes received by Wan-Bissaka. This graph could be interpreted in two ways. First, the total number of pass finding him was 48, higher than the average figure of 34.23 this season. Also, 28 of the received passes occurred in the opposition half, these hinted Wan-Bissaka was the attacking focus of United.

Wan-Bisssaka stayed high and wide on the pitch, providing the width and looking for crosses. His xA was 0.52, which was the highest figure since he joined United in the Premier League; also, he contributed eight crosses, more than the average of 2.89 crosses this season. Matić’s passes were quite important in the match. He attempted 13 passes to the final third and completed 11 of them. Another player who released Wan-Bissaka was Fred, as these two players exchanged 14 passes.

The following image is an example to demonstrate the attack of United. Solskjær kept his attacking players, Mata, James, Martial and Pereira at the centre, as they should be better at shooting. When Mata roamed his position, Wan-Bissaka pushed high. On this occasion, Matić found the right-back, who was free and unmarked on the right flank. Since Burnley defender stayed compact, no one was going to engage Wan-Bissaka.

Wan-Bissaka may not be the best crosser in the league, but given time and space to cross, he still provided some threats. However, surprisingly, Mata could not find the ball from the cross on this occasion. 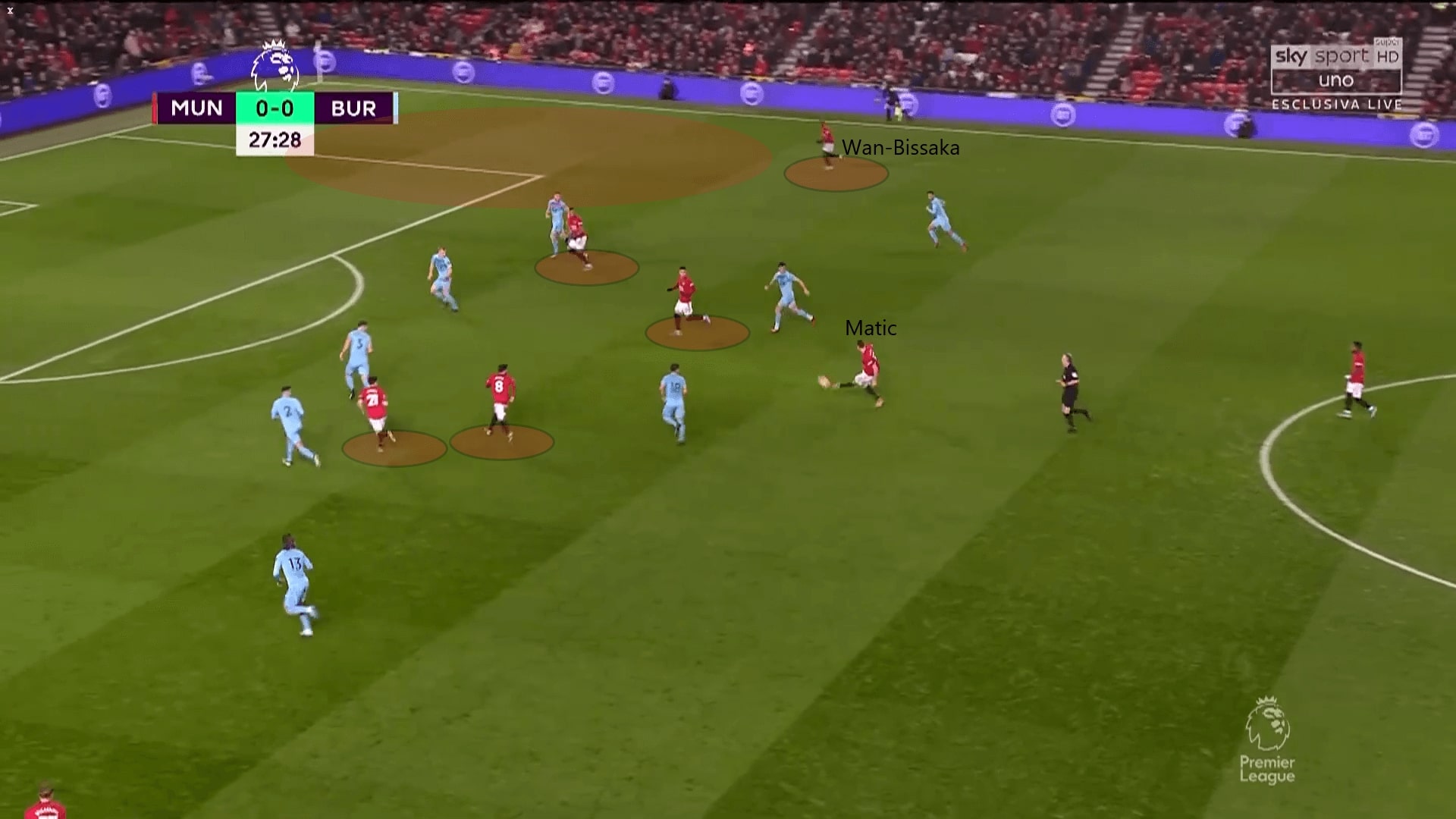 Another benefit of United’s offensive approach was an easier central penetration. With a free player, Mata, roaming his position on the pitch, he could overload a player with his teammates. Although this was a case that seldom happened, it still worth mentioning.

In this scenario, Matić, again, had the ball in the final third. Mata came inside and left Wan-Bissaka out wide. This time, the Serbian did not switch play to the right flank. Instead, he noticed Mata’s run, which caused Mee’s attention, and Mata took Mee with him.

Originally, Mee was marking Martial, therefore, now Martial was a free player. The Frenchman received the ball from Matić, had a one on one chance against the goalkeeper. However, he took too many touches and wasted a good chance that had a value of 0.27 xG, highest for United in the game. 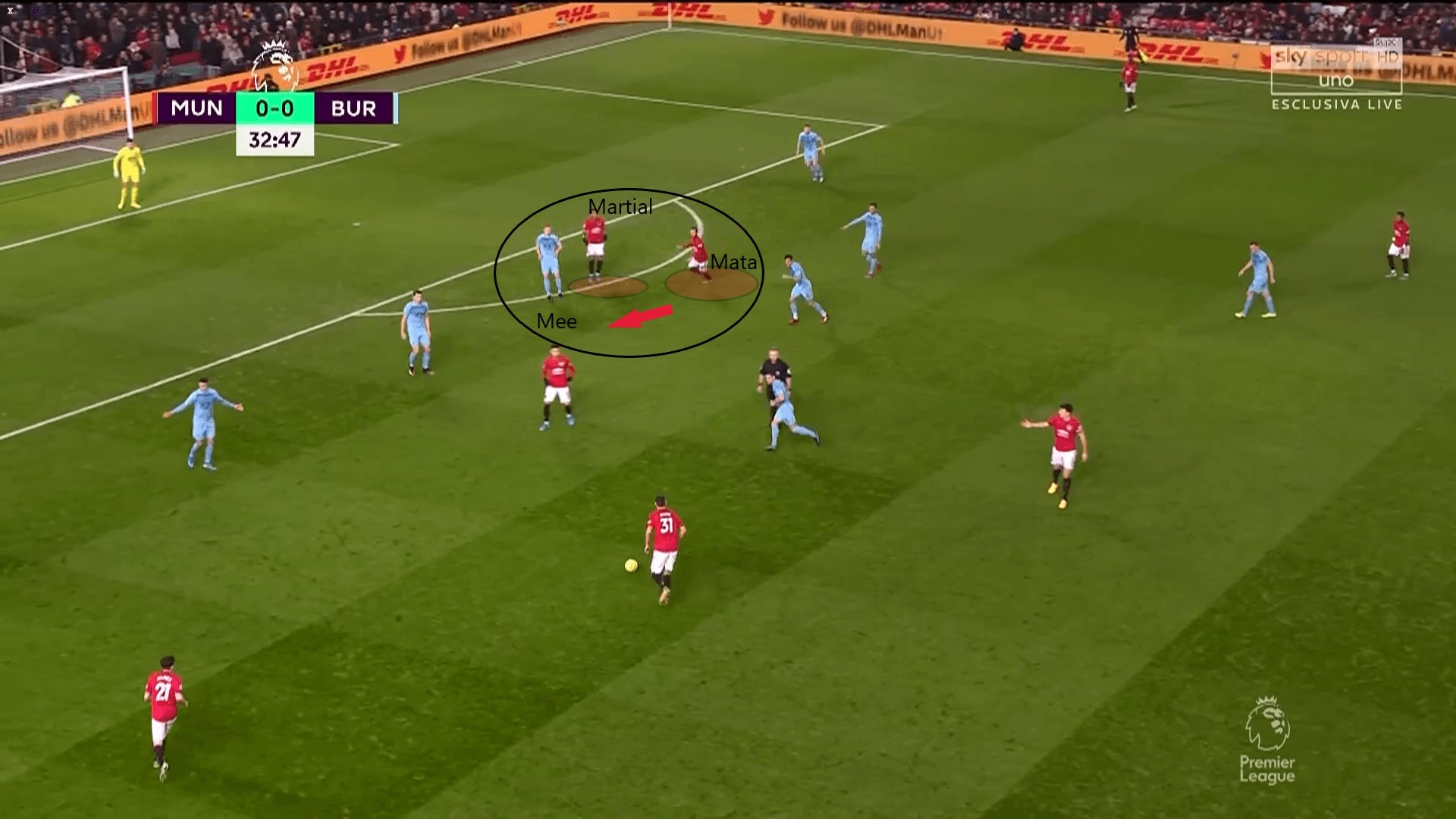 As the game progressed, United players looked tired. This was hinted by the xG figures. In the first half, the xG of United was 0.90 as they could still create some chances for themselves. However, this figure dropped to 0.56 in the second half.

United dominated the game in terms of possession, which they had 72% after 90 minutes. And, in this match, they restricted Burnley’s counter-attack number into one only. A part that United did very fine, was their counter-press in this match. They reacted quickly to win the ball back whenever it was lost.

We used the below situation as an example. United lost the ball in 15:01 when James’ chipped pass was intercepted by Lowton. Just a second later, United players counter-pressed. First, both Westwood and Cork were marked, so Burnley could not pass the ball to the centre. James pressed Lowton once he lost the ball, and Fred, who tended to step out early always, was marking Rodriguez.

Therefore, despite Lowton tried to find Rodriguez, he was disrupted by James, while Fred anticipated the pass and won the ball back for United. 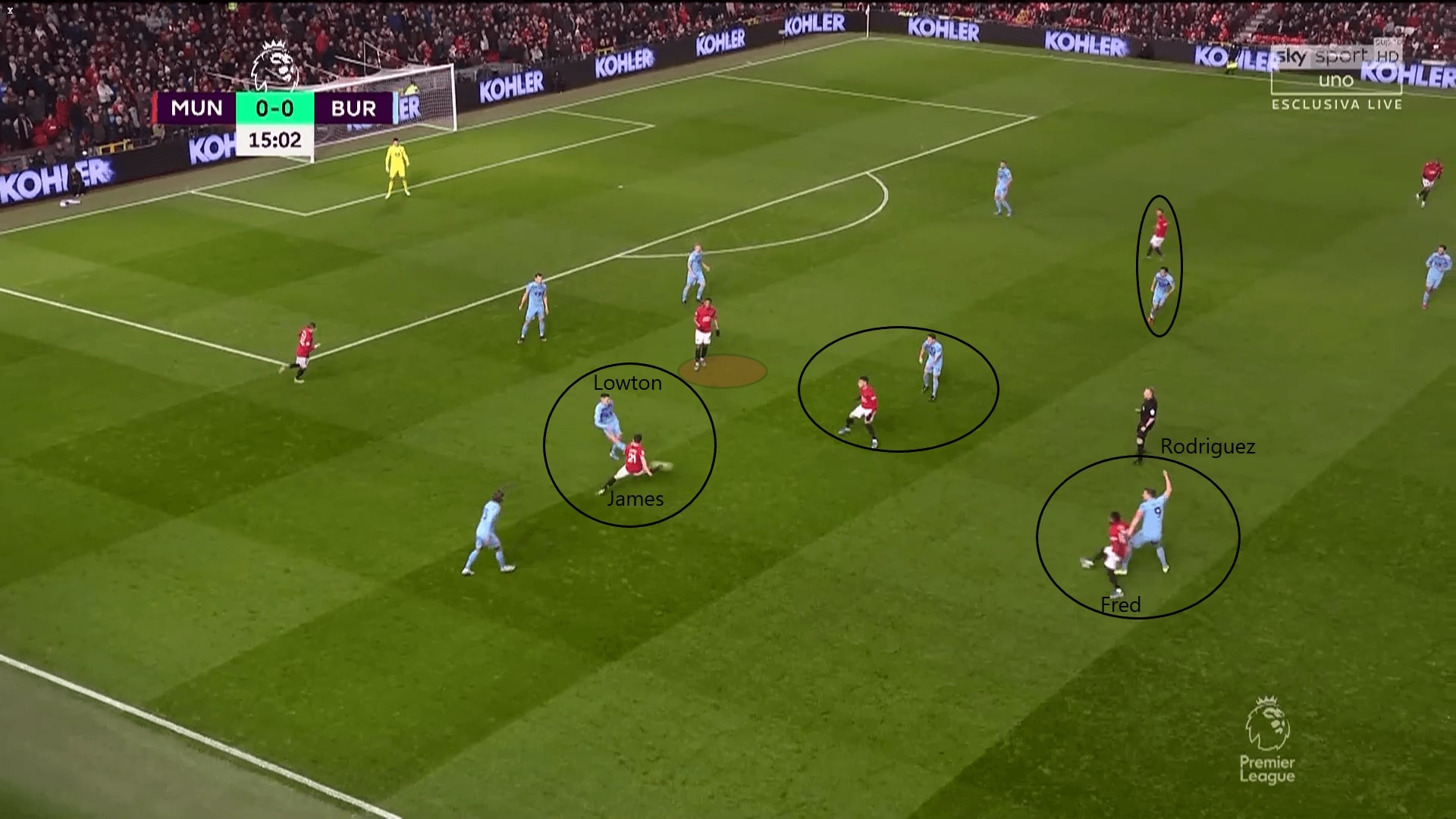 Burnley had a total of four offensive freekicks throughout the match, their shot conversion rate was 100%. Also, Wood scored a goal in the offensive set-piece. Therefore, we must illustrate these types of attacks by Dyche’s team.

Apart from Wood’s goal, we pick another example that occurred in the 23rd minute. Burnley got a freekick near the midfield line. At that moment, United defence was split into two. Four players were on the far side, while the other three on the near side, marking three players.

Then, Rodriguez began his run, leaving Fred. The Brazilian instructed his teammates to pay attention to Rodriguez and maybe he did not follow as United were defending in a zonal system. Hence, Rodriguez became a free player, and he could run into any space to overload a defender with his teammate.

The ball went to the far side first, then, it was headed inward, and we could notice the positioning of Burnley players at the centre. Wood came inside and overloaded Maguire with Cork. Since Williams was the player who marked Cork, therefore, Rodriguez was free at the far post. To summarise, at that area, Untied were in a two v three situation as Fred did not help.

Eventually, the ball was headed over Maguire as the skipper was marking Westwood. And, Wood had a shooting chance with 0.3 xG. 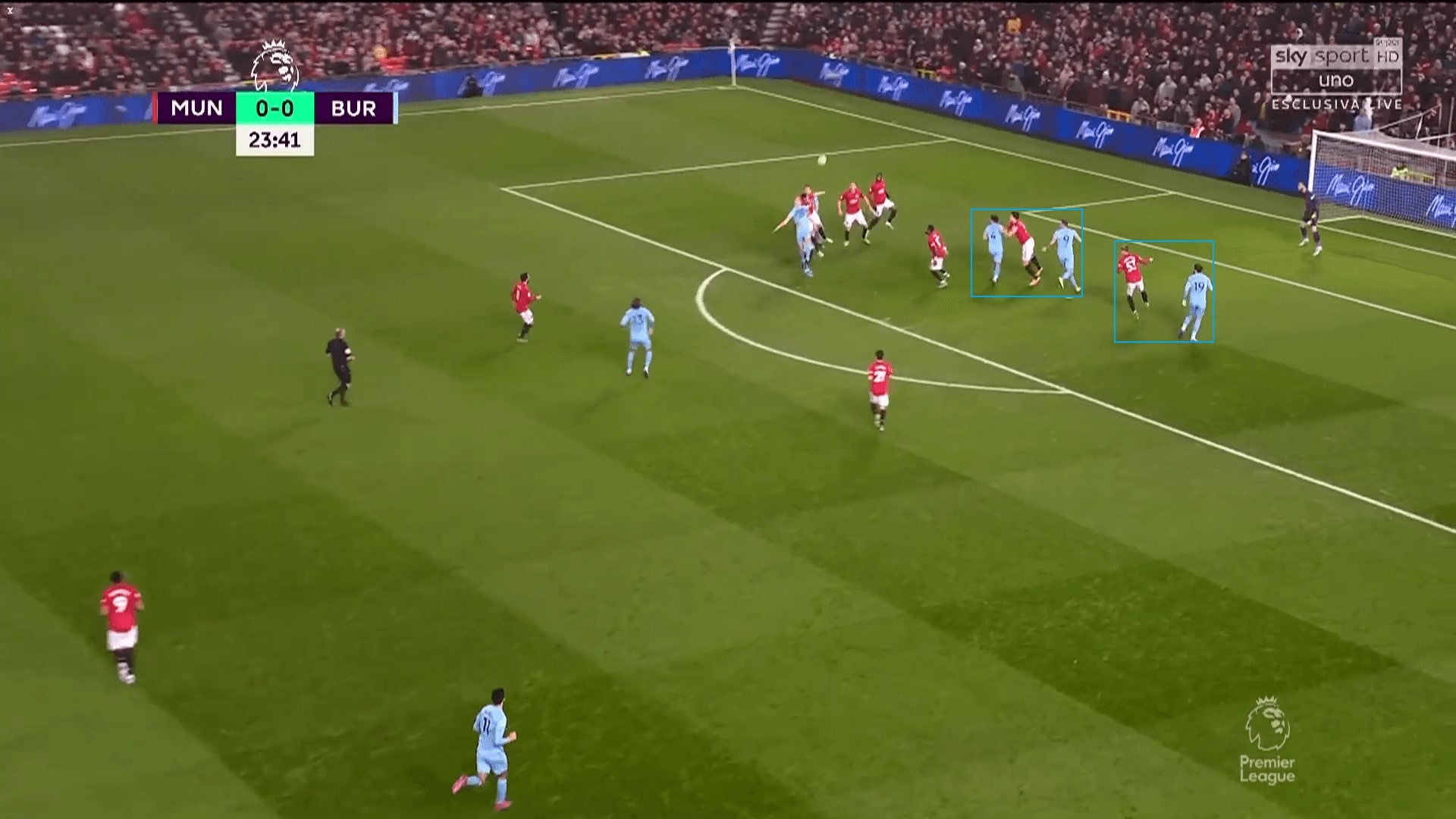 To sum up, it was another dismay at the Old Trafford again. Despite starting the players that performed better recently, the problems still exist. For example, they lacked creative or confusing movements in the final third and attempted too many shots outside of the box. When Solskjær tried to boost the attack on the left flank, he substituted Luke Shaw to replace Williams but the mindset was same. Still, United only wished to look for crosses which made them too predictable. A good point of this game would be the use of Wan-Bissaka, as, he was perceived as a right-back who defended very well, but not the best in the attack. This could be another approach for United’s attack in the future.

For Burnley, these three points were very important. Now, they have 30 points, sit 13th in the league table, just four away from United. Their next opponents are Norwich, Arsenal, Southampton, Bournemouth and Newcastle, which could be crucial for their survival in the top division. Finally, we have to appreciate the wonderful goal of Rodriguez that came from an xG of 0.09.