In the FA Cup third-round replays, there was a clash between two Premier League teams: Manchester United and Wolves. In the previous game, neither side scored any goals, resulted in a nil-nil draw. This time, they moved to the Old Trafford, for another game to decide who to progress through.

Manchester United recovered from the loss against their rival, Manchester City, they had a four-nil victory against Norwich at the weekend. Since they did not have an advantage in the English League Cup, they also prepared the FA Cup games seriously. Ole Gunnar Solskjær played Nemanja Matić and Juan Mata, which was vital to their victory.

Wolves had 34 points in the league, just three behind United. Their form dropped slightly after the epic comeback against City. Despite participating in the continental competition, Nuno Espírito Santo still started a very strong team.

In this tactical analysis, we will show you how United progressed to the next round. It is an analysis that focused on tactics.

United lined up in a 4-2-3-1 formation. Harry Maguire returned from injury, partnered Victor Lindelöf at the centre of the defence. Since Paul Pogba and Scott Mctominay remained sidelined, Fred and Matić played as the defensive midfielders, while Andreas Pereira was on the bench.

Nuno’s team played in a 5-4-1 formation. With Patrick Cutrone leaving the team, Pedro Neto remained as a suitable option to replace Diogo Jota, who was unavailable for the game. Romain Saïss, Conor Coady and Leander Dendoncker played as the back-three on the pitch. 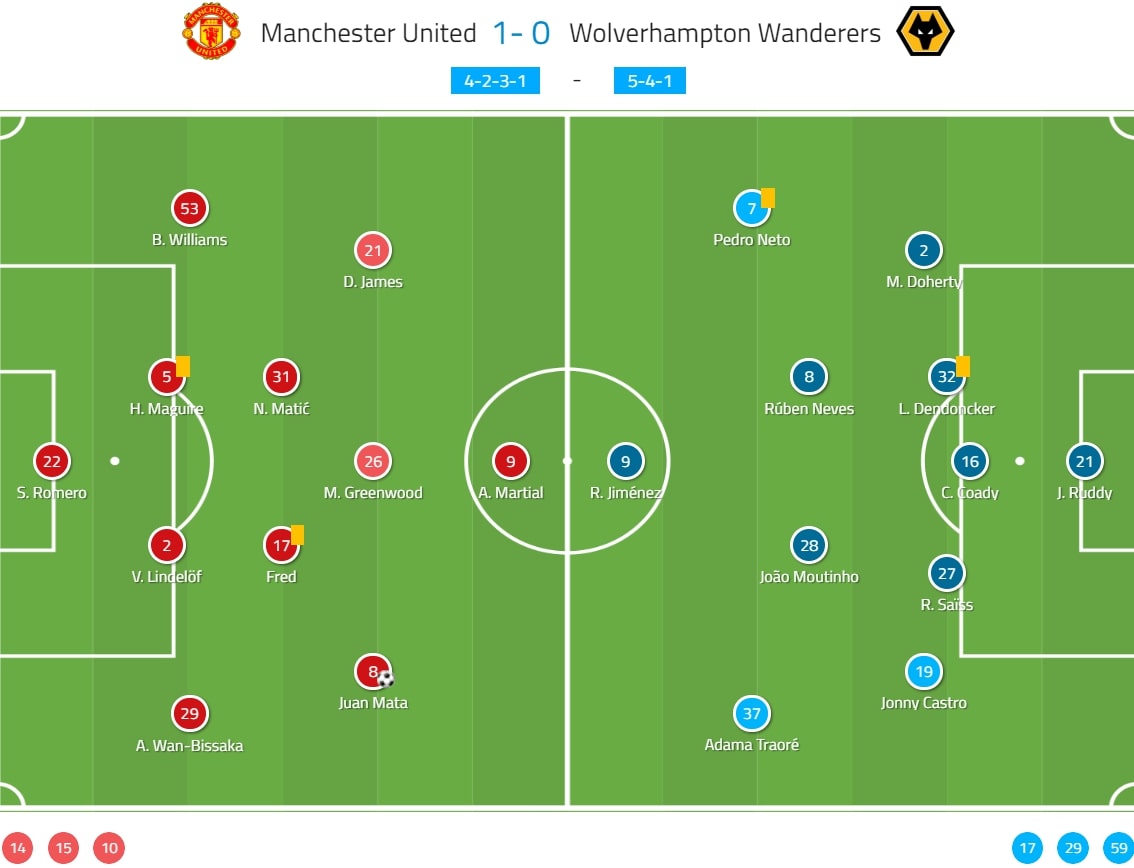 In general, Wolves defended in a 5-4-1 block, they tried to force United going to the flanks instead of playing at the centre. Usually, João Moutinho will step out early to close of the defensive midfielder. Since then, Mata or other United players would exploit the space between the lines, so Rúben Neves would stay deeper to cover the space. With this approach, they covered the centre and denied short penetrations.

The following example demonstrated the block of Wolves. When Matić holds the ball, Moutinho stepped forward, with Adama Traoré covering Fred. The passing lanes to Mata or Daniel James were quickly closed by Moutinho and Jiménez. Therefore, he did not take the risks and played the ball to Maguire.

On other occasions, one of the wingbacks could step forward to close the ball carrying centre-back off, then, the shape of Wolves was liked a 5-3-2. When United reorganized the attack, Wolves would return to that 5-4-1 shape. If Wolves’ press succeeds, they could have some offensive transitions to generate chances. 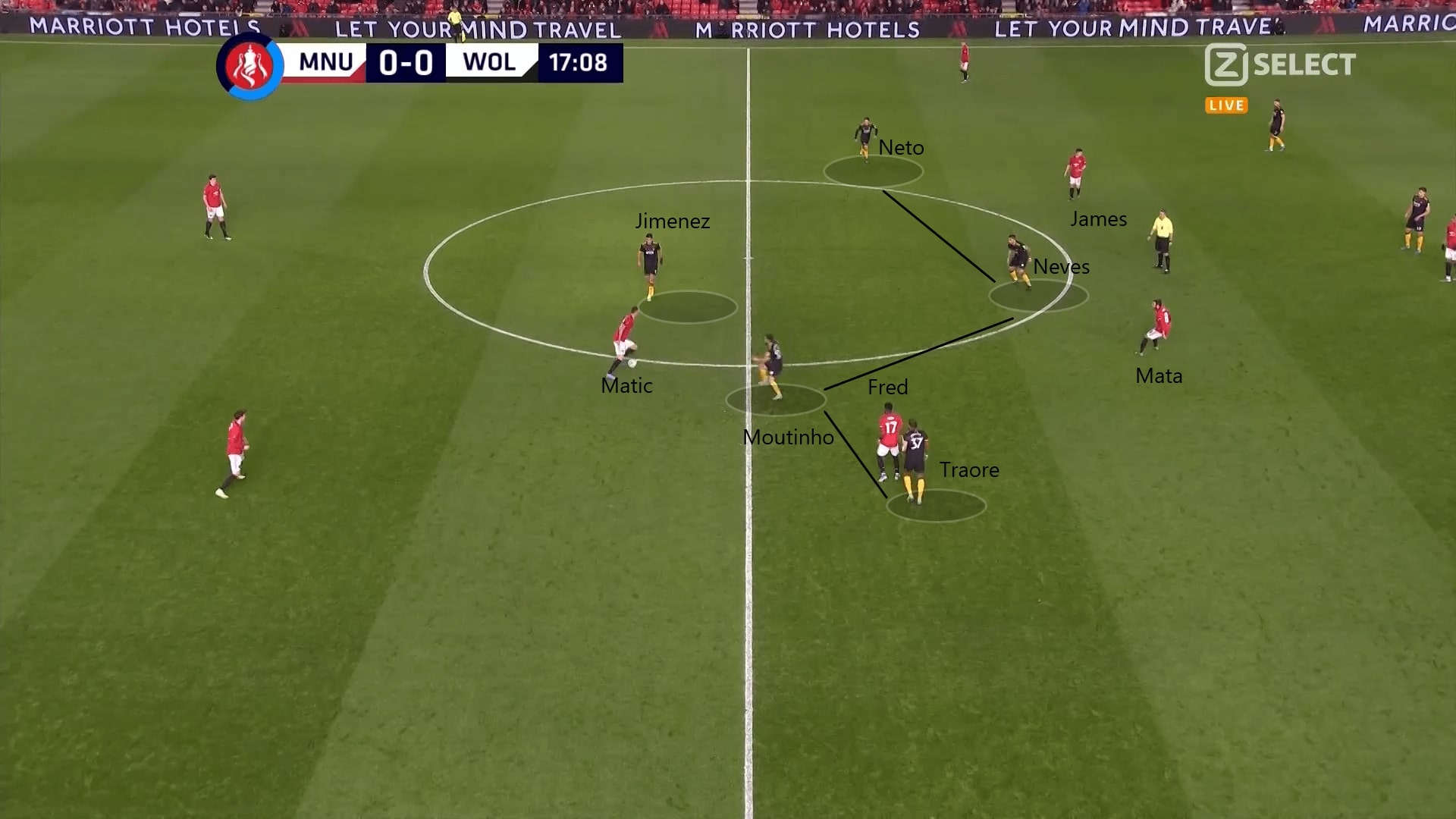 Solskjær instructed Mata to roam his position in this game, therefore, he seldom holds his position on the right. This might become a reason that United was trapped at sides. Once the ball was forced to the side, Wolves players picked the closest options around the ball, stopped the progress of the attack.

In this example, Aaron Wan-Bissaka had the ball, facing Jonny Otto. Mason Greenwood was making a forward run, but, Saïss was behind him. Coady and Moutinho shut the space around Mata, the Portuguese also instructed Traoré to cover Fred.

Since Jonny was coming from a deeper position, he limited the space for the United right-back to dribble into. At that moment, Wan-Bissaka could not progress the ball. The ball eventually returned to the legs of the centre-backs. 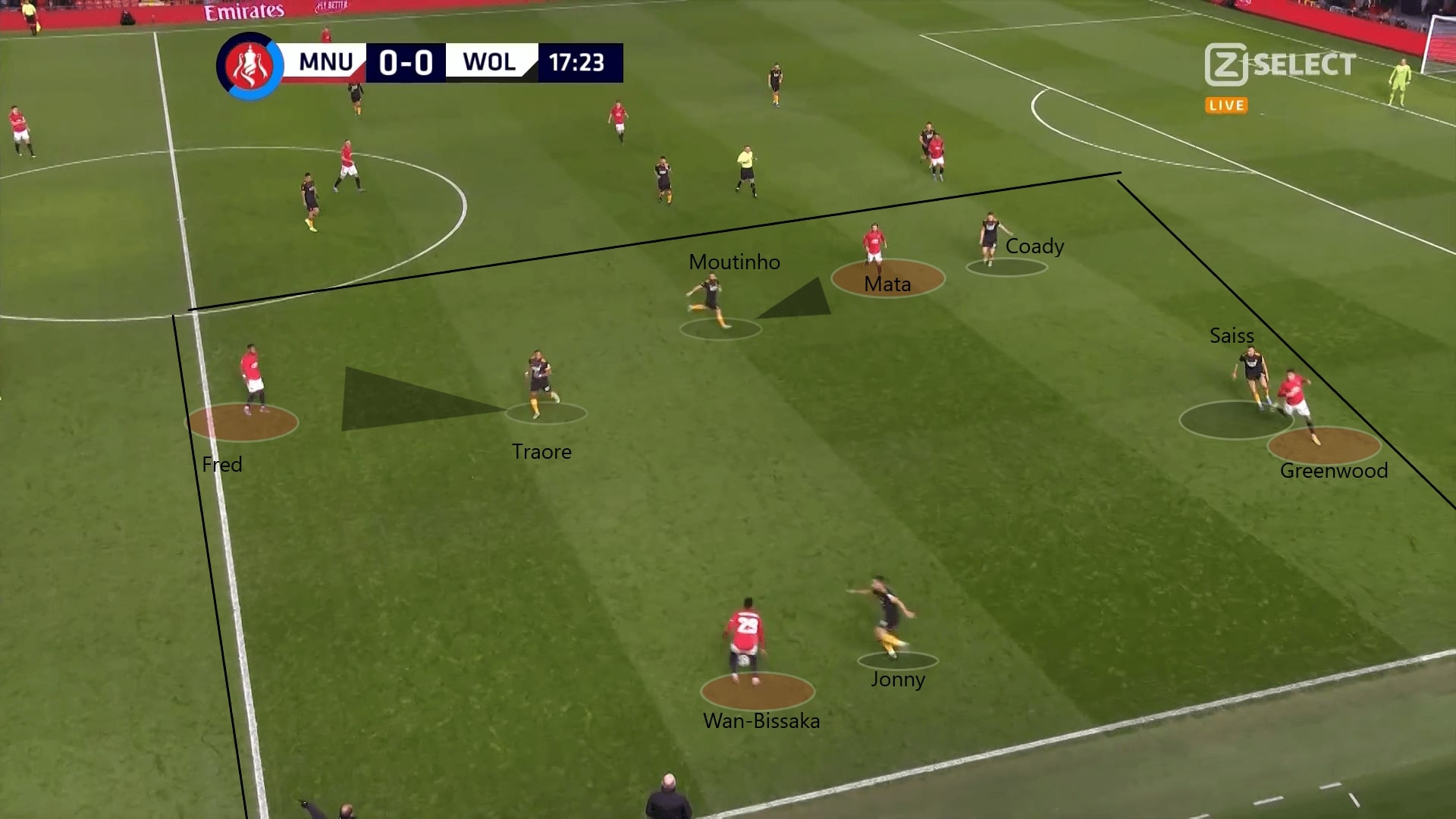 However, the defence of Wolves was not flawless. When the away team pressed high, with five to six players, United, on many occasions, still played the ball out. Below is the passing map of Matić, we should focus on the lateral passes he made this game. Matić made 77 passes in the game and completed 90.9% of them. The Serbian showed his composure and calmness when dealing with the press. When United opened its shape in the build-up, Matić served as the entrepot to move the ball to the opened area. 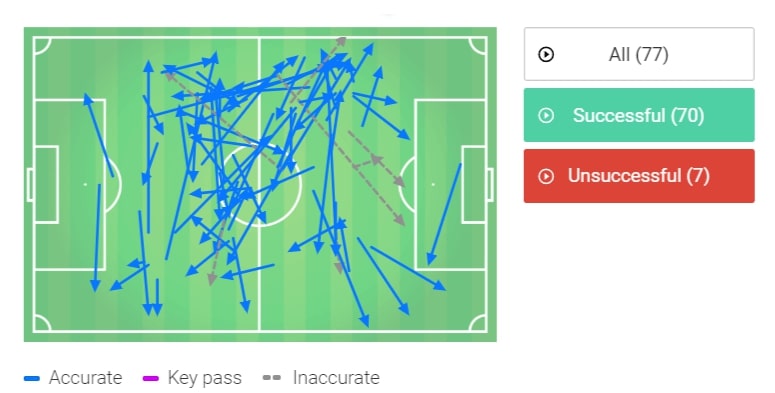 The situation was further explained in this example. On this occasion, Wolves decided to press. They stuck to their defensive style, which they committed numbers on the ball side to win the ball in a tight area. When the pass was made to Matić by Wan-Bissaka, he received he pressure from Neves.

Matić did not panic, before the pass, he already knew the positions of his teammates. The United left-back, Brandon Williams, was unmarked on the left, with plenty of space in front of him. Therefore, he could pass the ball to Williams easily, and United get rid of the press, continued the attack. 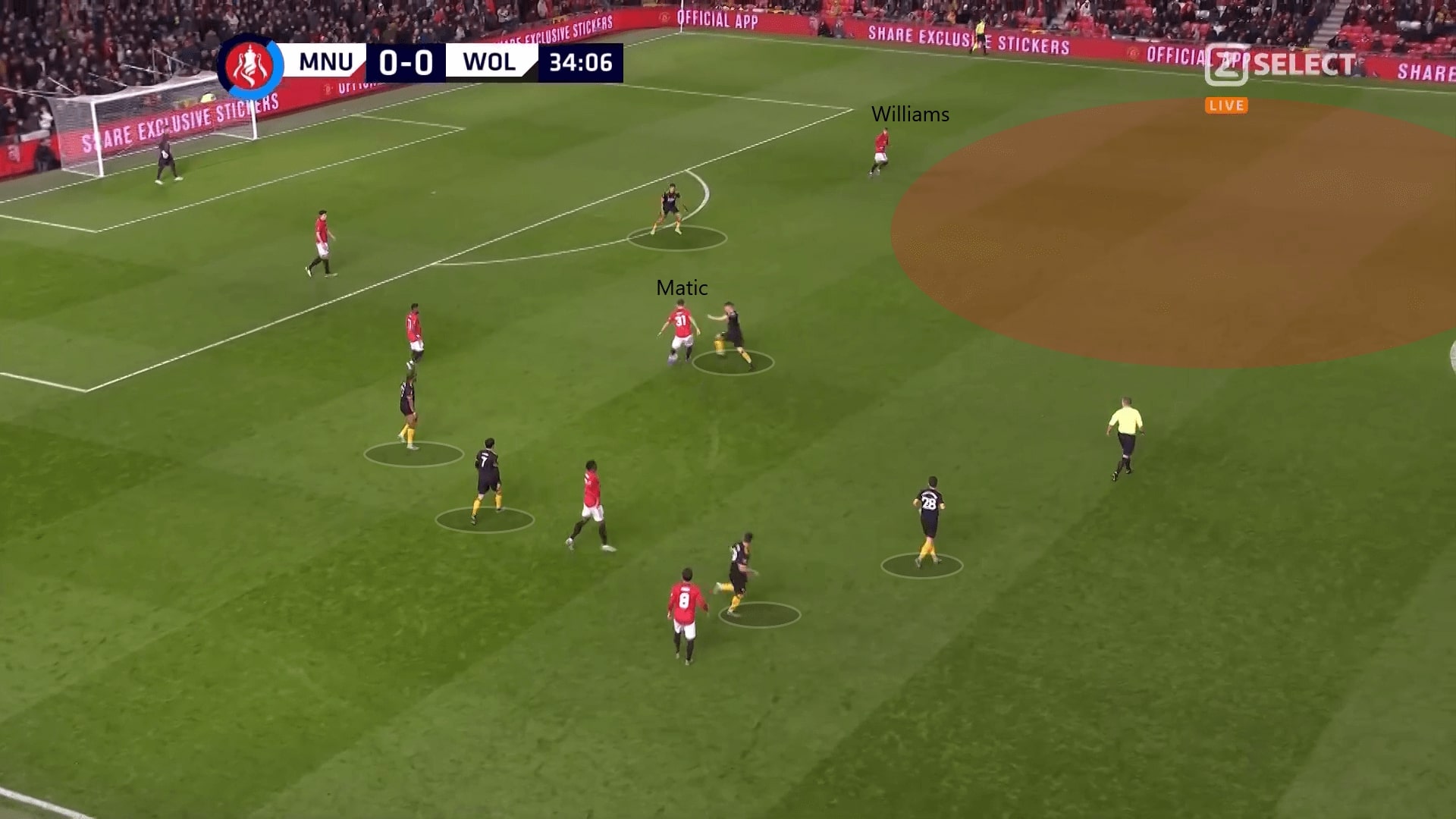 Another outlet of United’s attack was Mata. Below is the heat map of Mata in this game. As mentioned, the Spaniard roamed his position instead of staying wide and providing the width on the right flank. Mata was everywhere in this match, he frequently dropped to zone 11, overloaded the two Wolves midfielders with Fred and Matić. 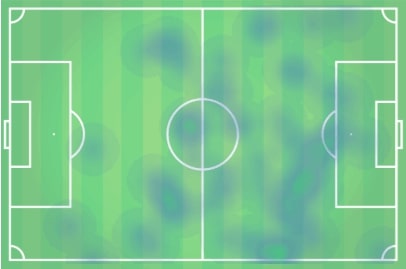 Just like other games, Solskjær wanted his pacey players to exploit the space behind the defensive line. In this match, United continued to play with a direct approach, with their players making forward runs. Among the runs, those from James were the most eye-catching, and, troubled Wolves’ defence.

Maguire, Lindelöf and Matić were all encouraged to play long passes. We tried to use two examples to summarize the advantages brought by this approach. First, in this example, the Sweden centre-back played long to James, who ran between Dendoncker and Matt Doherty. 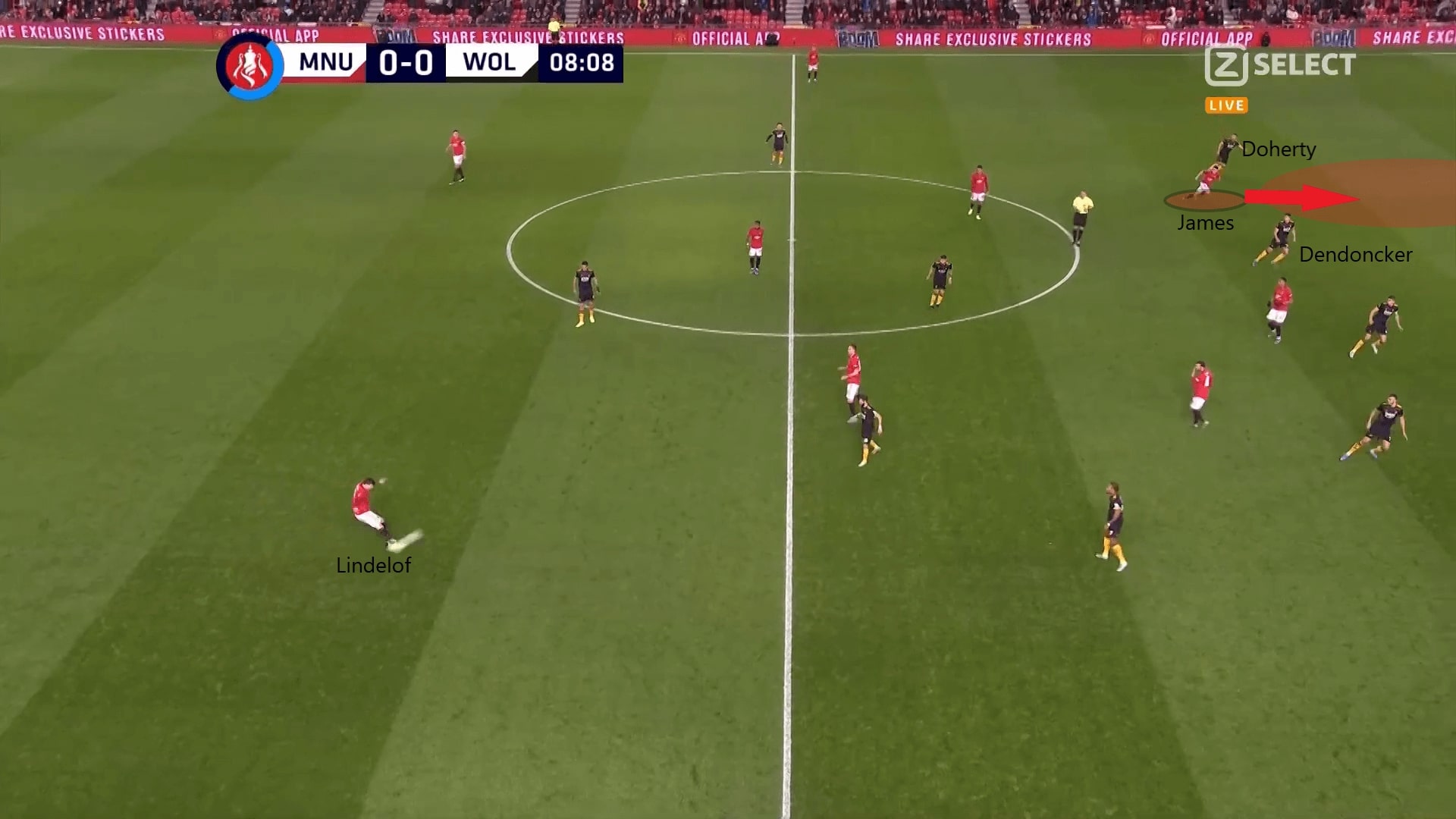 All the Wolves defenders chased James and retreated to their own box. However, the midfielders of Wolves stayed too far away from the defenders. Therefore, when Anthony Martial and Mata made the supporting runs and exploited zone 14, Neves was the only player to defend the two.

When James returned the ball out to Mata, no one closed him off instantaneously. Though the Spaniard did not take his time to shoot, it was a good chance for United to break the defence of Wolves. 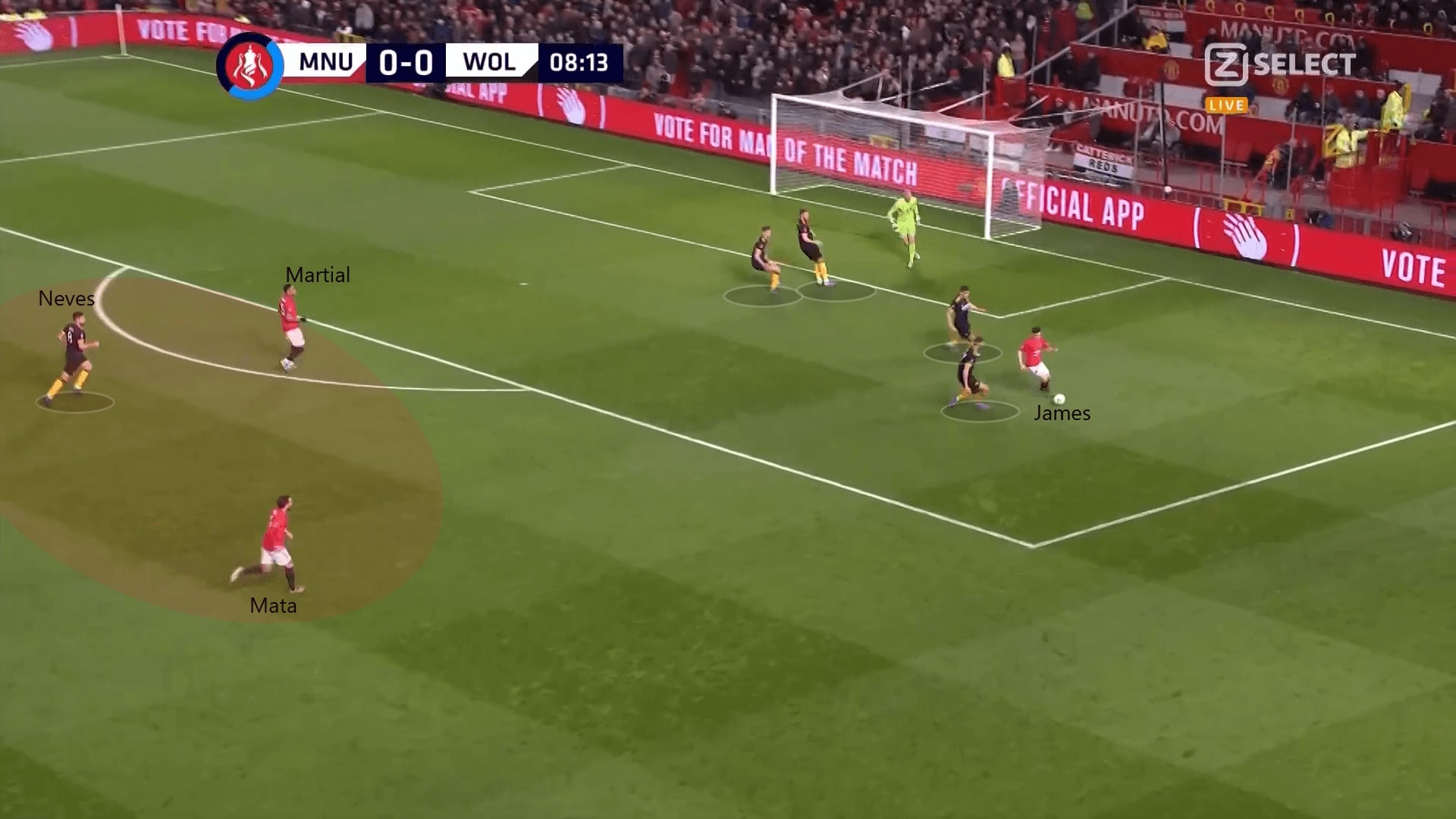 A better condition was, James or any other forward players could have a one v one opportunity against John Ruddy. As, in the closing stage of the first half, with this approach, Untied created their best chance of the game, with an xG of 0.26.

In the below situation, James recognized the space behind the defenders. He started his run before Fred passed him the ball over the Coady. The touch of James was slightly light, which forced the Welsh to shoot with his weaker foot. Ruddy saved it. 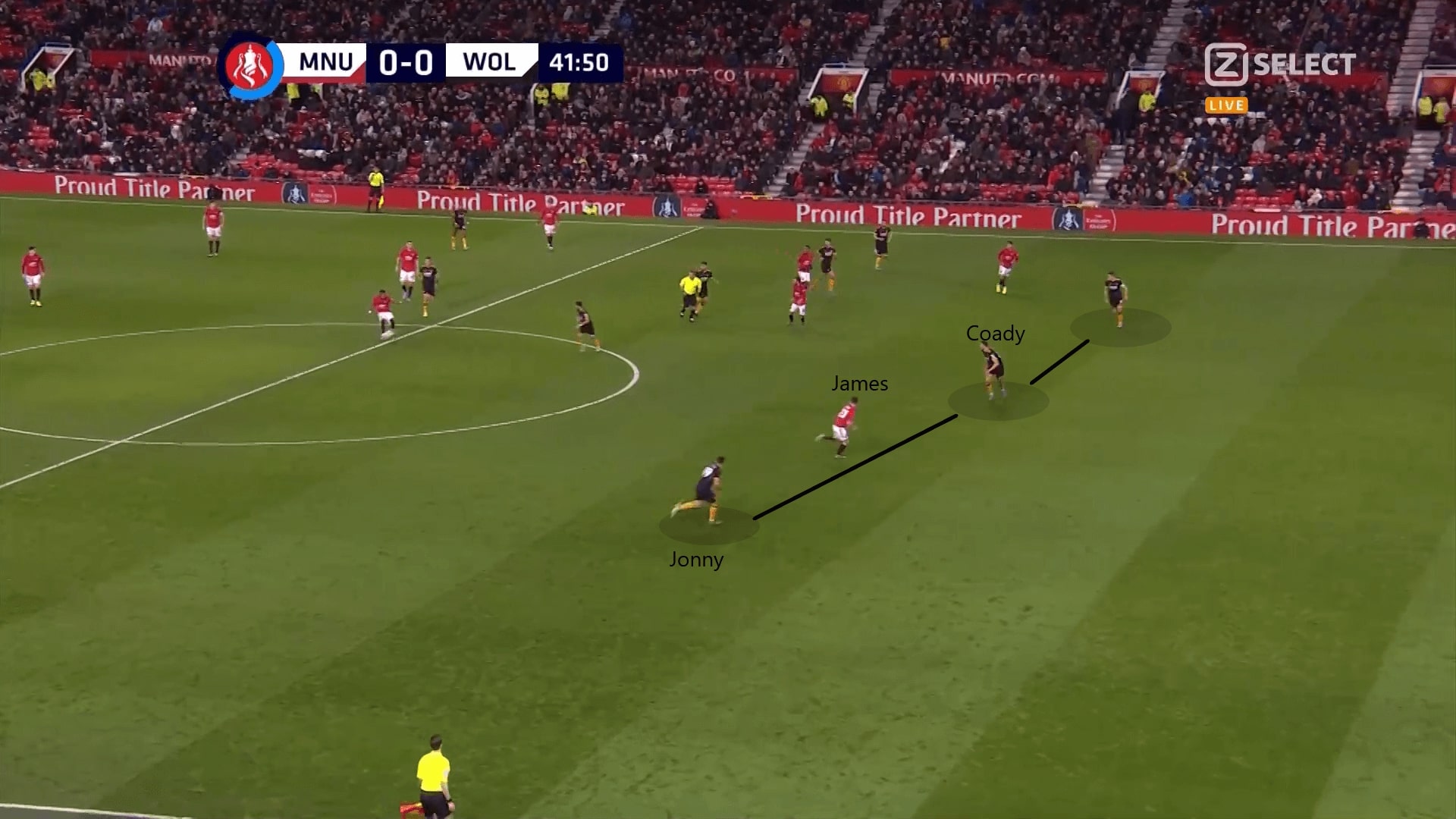 United in the final third

When United reached the final third, there were also points to note, which we tried to explain the relatively quiet performance of Greenwood. The young Englishman showed his ability to score whenever he got minutes, he recorded nine goals for the first team in 1203 minutes. He could be instructed to stay higher on the pitch, as Mata would drop deeper.

United tried to commit number at the frontline, isolating the defenders, this example was one of their most successful cases. When Williams had the ball, James pined Dendoncker; Greenwood pinned Coady; Mata pinned Saïss. The three Wolves centre-backs were stretched by the positions of United players.

Williams tried to pick Mata at the far post, but the quality of the pass and movement of Mata did not generate a big opportunity for United. This had been an issue of United recently when the Red Devils reached the final-third, they lacked creative movement to generate spaces. On most occasions, their players tended to make forward runs, which lacked changes and unpredictability. In this match, Greenwood did not have many chances in the final third. 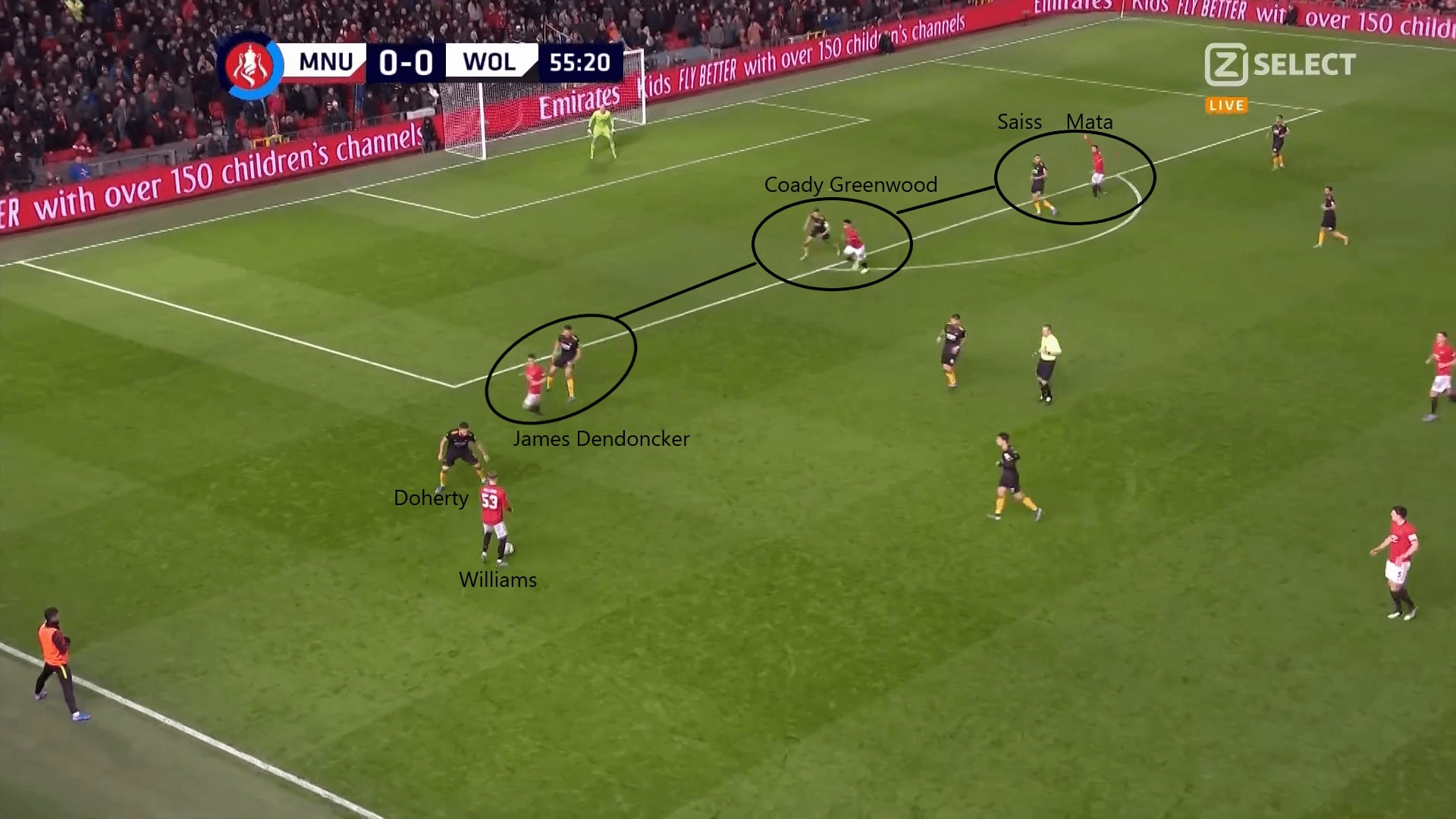 Defensively, in the open plays, United did quite fine to prevent Wolves from creating huge chances. They defended in a 4-4-2 block in most cases, with the goals that blocking the central area and deny penetrations. They stayed compact and forced Wolves playing the ball around the block.

The below image illustrated the block of United. After allowing Wolves to pass the ball around for half a minute, the United block did not lose shape. They kept retreating, compressed space. At the centre, James covered Moutinho, and no Wolves players were dropping within the United midfielders.

They left the flank opened, with Neto enjoyed some space. With no options at the centre, Neves spread the ball to the former Lazio man. When Doherty ran into the half-spaces, Matić anticipated and covered the Irish. Neto found no option, he did not cross, returned the ball back, the Wolves attack reached the final-third, but dissolve without any meaningful chances.

On some occasions, when United defenders left their positions, their defensive midfielders, Fred and Matić would drop deep to cover the space. 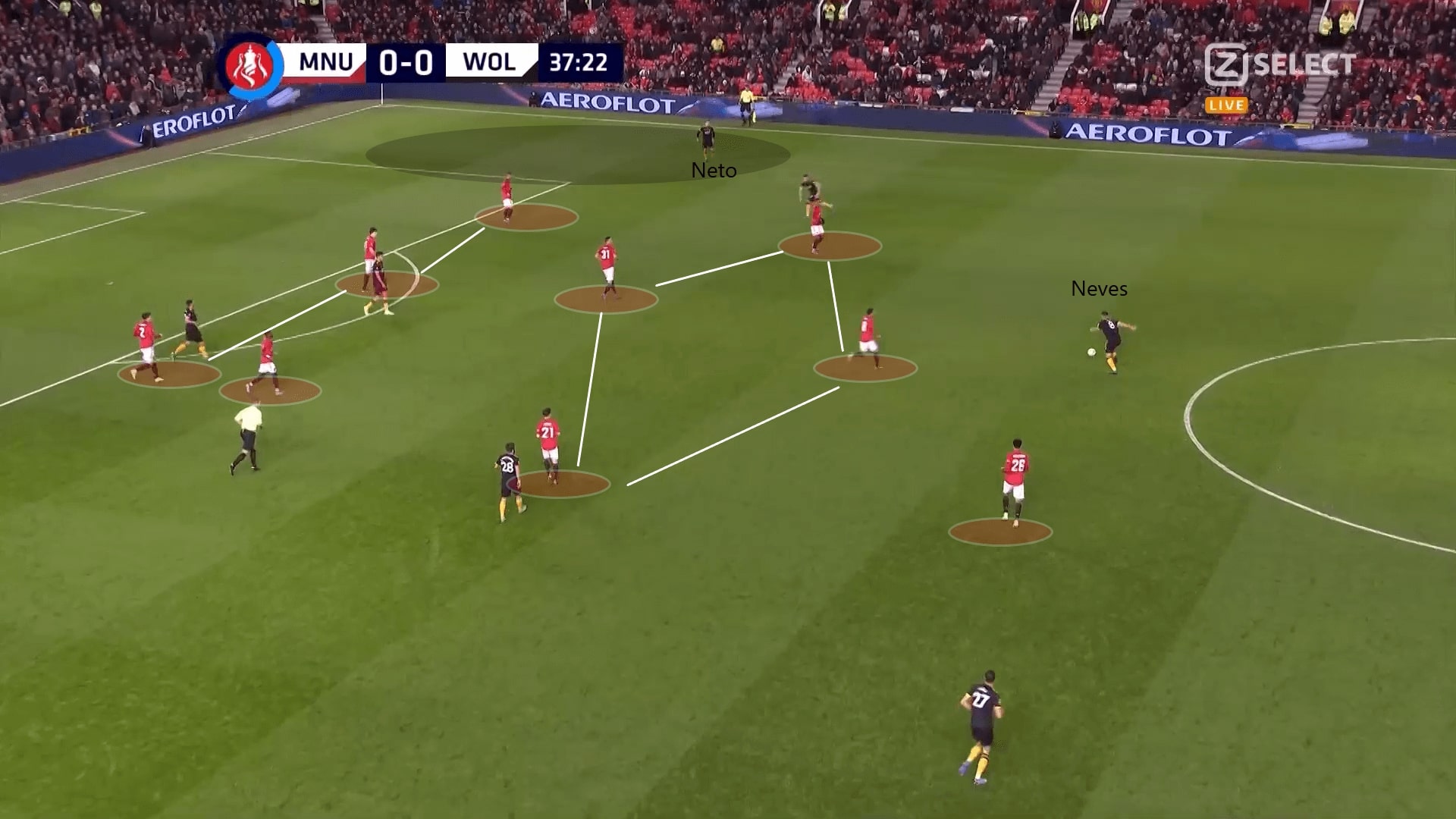 The short corners of Wolves

Apart from transitions, Nuno’s team showed they had prepared something in their offensive corners. The three first-half corners of Wolves were all short corners, though the contexts were different, the principals of these corners were same.

With the short corner, Wolves tried to lure United to play an offside trap, with nearly all players of both sides retreating from the box. In that instant, a Wolves player at the far post made a reversed-run and tried to receive the cross. This example was the best chance of Wolves throughout the game, with an xG of 0.25 from Doherty.

On this occasion, Moutinho played short to Jonny. The Spaniard’s body orientation hinted a cross, however, in that instant, United players still stayed deep. It was difficult for the pass to reach Doherty between the goalkeeper and defenders. Therefore, he passed the ball to Neves. 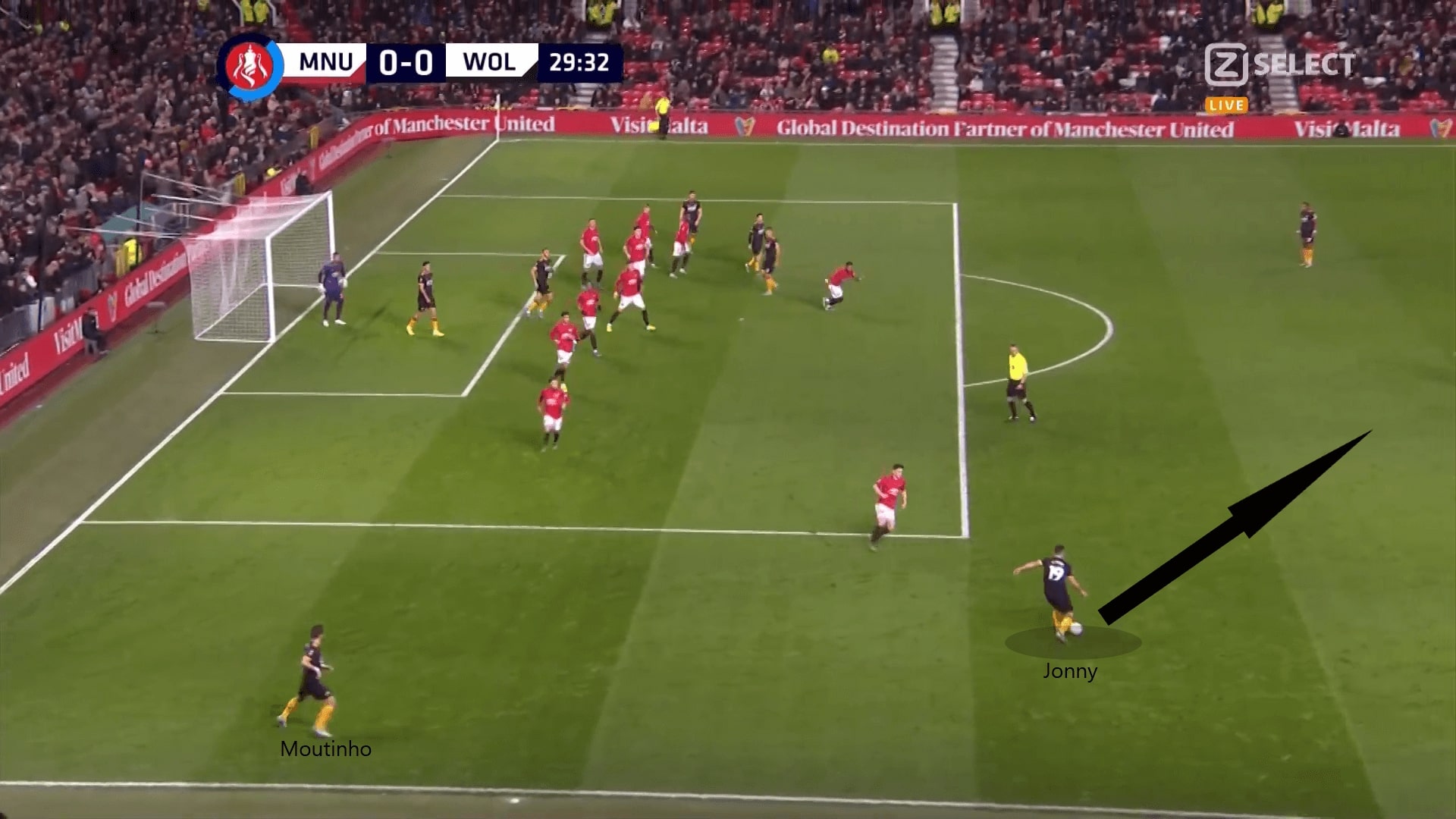 When Jonny made the pass, United players tried to play an offside trap, with all their players leaving the penalty box. The Wolves players did not move, an exception was Doherty, who took this chance to make a forward run. Williams did not follow the rest of his teammates, he was slightly late to recognize the situation, hence, Doherty stayed onside. It was fortunate for United that the Irish hit the post.

On other occasions, Wolves crossed within one or two passes from the short corner. For example, the outswing cross from Moutinho also applied the same concept. 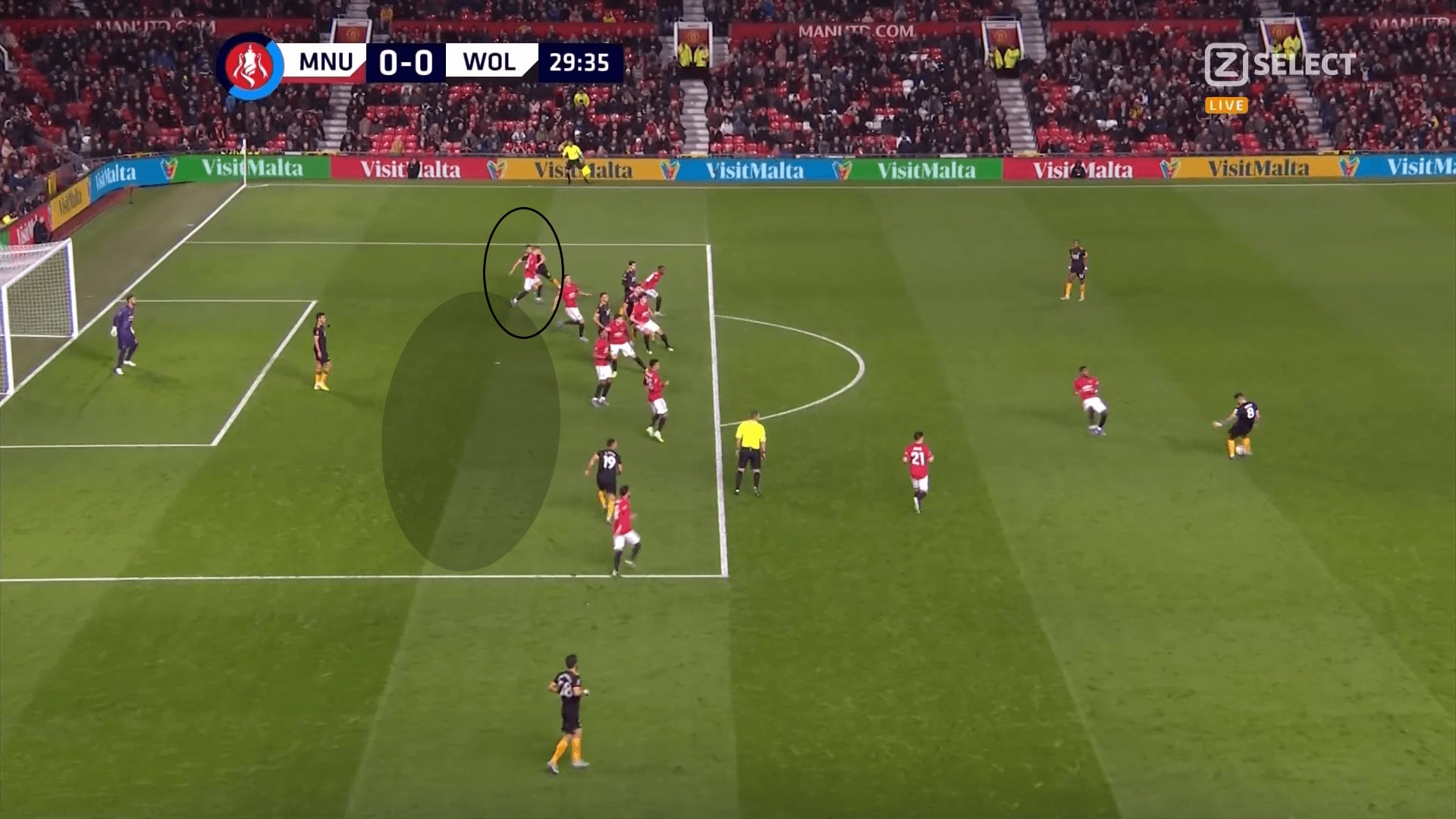 United progressed to the next stage thanks to the lovely chip of Mata, they had an xG of 1.02 in this game. Wolves were not totally outplayed, as they also had 0.77 xG. When United were keeping the ball in their own half, Wolves did not provide enough pressure, Lindelöf and Maguire were too comfortable. At first, Nuno put Traoré on the left side to face Wan-Bissaka, in latter stages, he switched side with Neto. The Spaniard created a good cross for Jiménez in the early stages of the game, but the Mexican wasted the chance. Wolves should have been more clinical in front of goal.