The 13th game week of 2021 Allsvenskan saw potential league leaders, Djurgardens take on 7th placed Hacken. The game was pretty crucial for both the teams as Djurgardens are chasing defending champions Malmo for the top spot and a win would take them back to the top with the halfway stage of the season approaching.

Meanwhile, Hacken would be looking to give a tough challenge for the Europa League spots as they currently sit four points behind 5th placed AIK. This tactical analysis features the analysis of tactics deployed by both teams and how Djurgardens narrowly edged out Hacken to claim three points. Let us begin the analysis.

Djurgardens made one change to the lineup that beat Kalmar 1-0 last week. Striker Karl Holmberg made way for Joel Asoro as Kim Bergstrand looked to retain the majority of his team that is on an unbeaten streak. 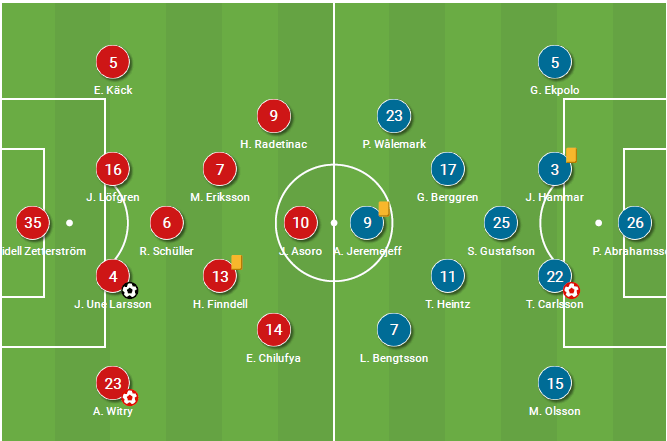 Hacken, on the other hand, made 3 changes to the lineup that drew 1-1 against Elfsborg last week. Hammar, Olsson and Gustafson were drafted into the lineup by Per-Mathias Hogmo.

Djurgardens’ horizontality gets them to the final third

In a 4-3-3 system resembling modern-day possession-based teams like Pep’s Manchester City, Djurgardens went out to dominate the game by controlling the possession as well as the proceedings. The wingers positioned themselves very wide like in the image below. The idea was to stretch Hacken’s defence and find spaces in between the CBs and FBs. The wingers’ positioning meant that there were multiple instances where they were able to attract the full-backs while the CM made blindside runs into the boxes through the half-spaces. 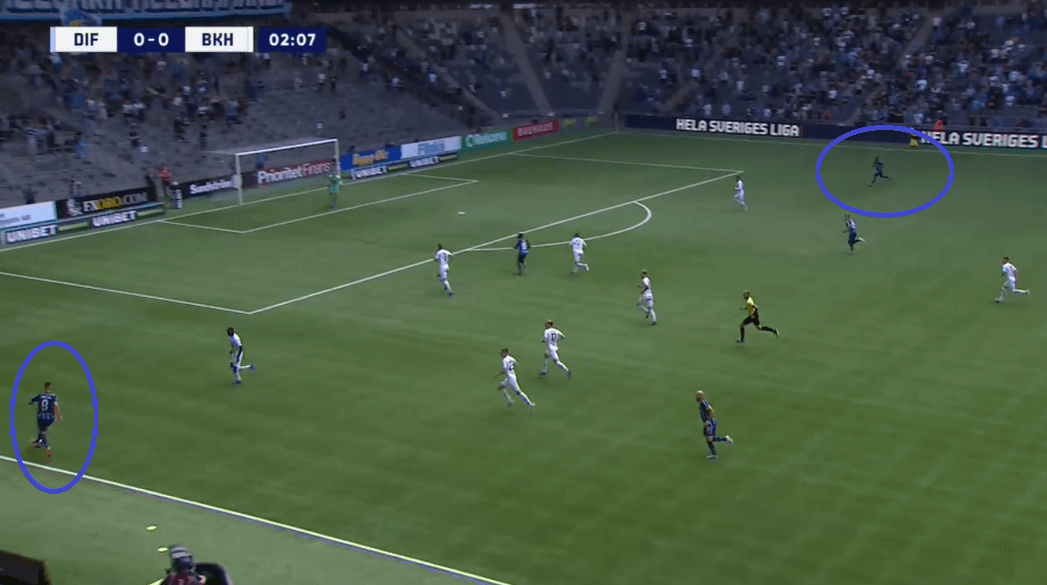 The wingers taking the full-back also would open spaces for the Djurgardens’ full-back to make an overlapping run into the deep. This way Djurgarden would slightly mix things up when they move into the final third to keep the Hacken defenders guessing and uncomfortable.

In the first phase, they would go with an asymmetric build-up shape where the LB would often drop deep while the RB stays slightly higher up the pitch. This means that the CDM would not join the first line. One of the reasons for this is that to play a direct ball over the defensive line as LB being left-footed would pave the way for such a perfect pass. The winger on the left side would provide the width by hugging the touchline. We can see an example of this in the image below as to how the full-backs are positioned. 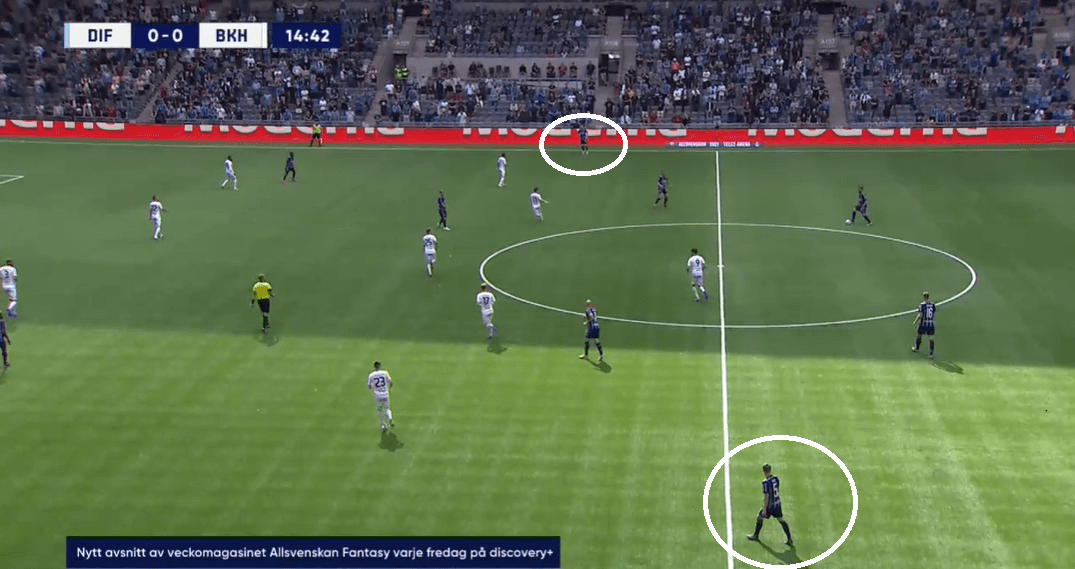 When RB tends to be higher the winger on that side would show his flexibility in positioning by staying in the interior and pinning the Hacken full-back. This means that a switch would be open to the RB and Djurgardens would make use of that to quickly shift the ball to the opposite side.  The immediate switch to the other side would be enabled due to the LB dropping deep and being involved in moving the ball to the middle third. This means that again he can now naturally play a switch to the opposite flank with his body shape like in the image below. 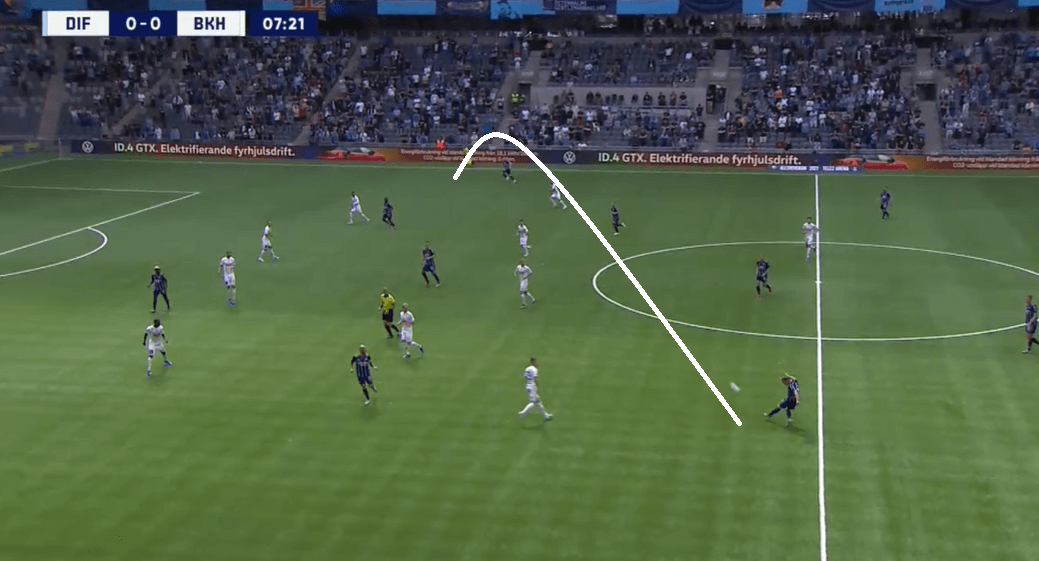 Djurgardens also did use some double spacing on the flank where they would place two wide players on the same horizontal lane on the opposite side while the full-back of Hacken on that side would be pinned to stay inside. Once the ball immediately goes to that flank the two players would combine and look to create immediate overloads against that full-back who is yet to reach either of them in time. This gives them extra time to think about who will be underlapping or overlapping like in the image below. 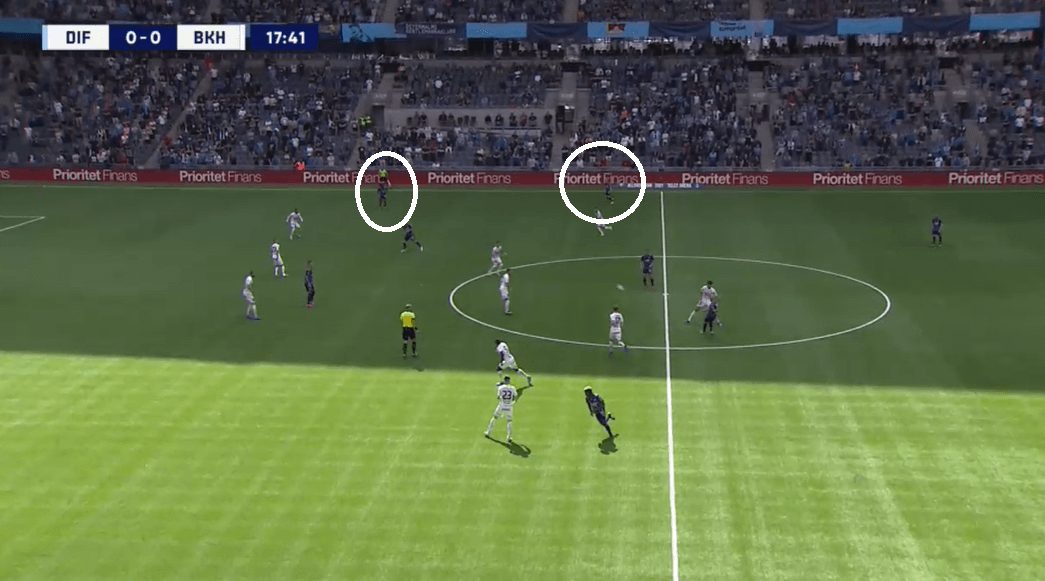 Hacken’s press in the first half was pretty good and Djurgardens often found it difficult to break through their press and move the ball into the final third. This meant that they weren’t afraid to go long and whenever they had a chance they played a direct ball to one of their forwards and the midfielders would quickly pounce to win the second ball. 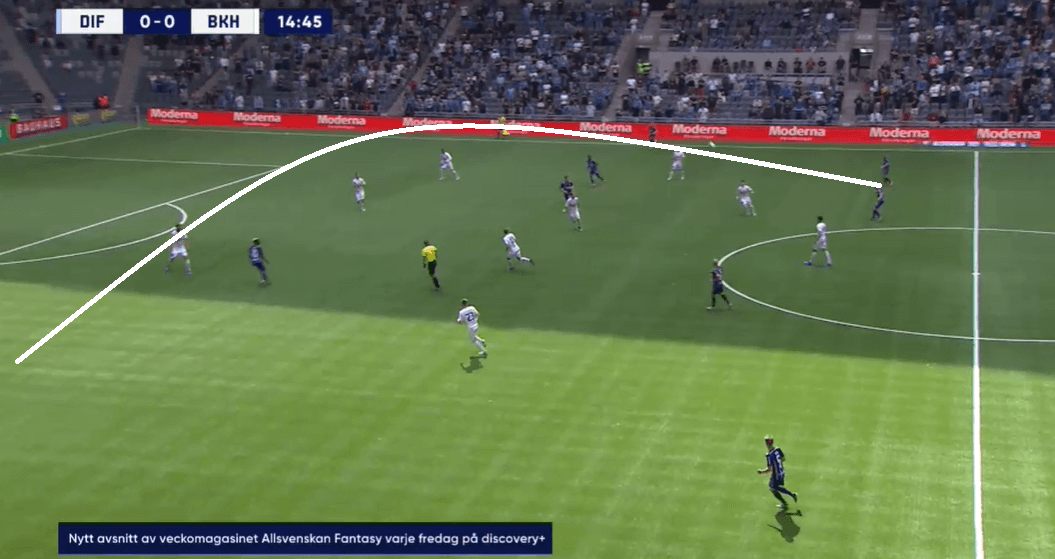 In the second half, Djurgardens made a small tactical change to take the lead. They decided to drop their forward deep into the half-spaces instead of staying wide. This is to initially pin the full-back or the centre-back and dropping deep would mean that they would be dragged from their position and open spaces behind them for the midfielder or other forwards to make runs into. 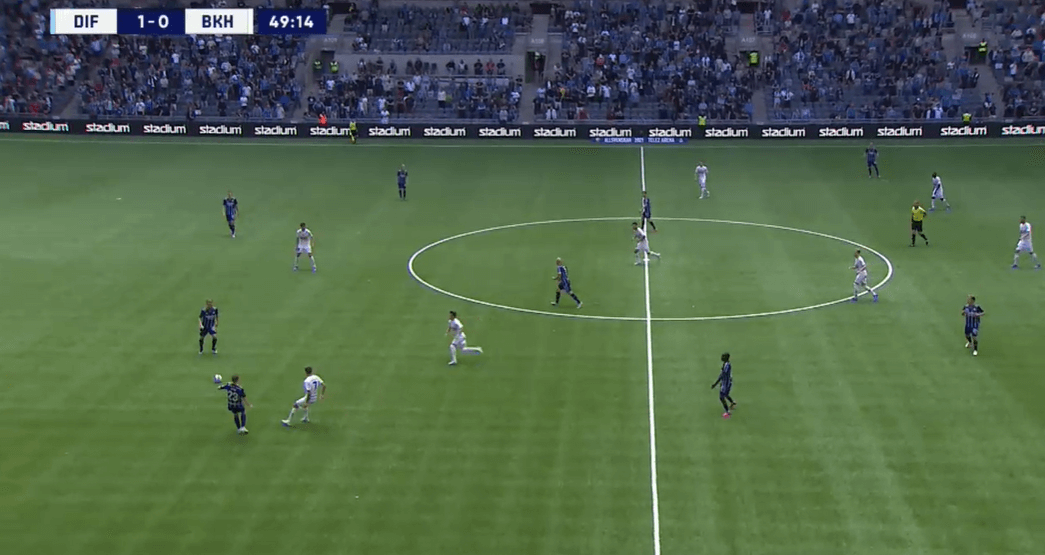 The league leaders pressed in a 4-3-3 shape which is quite rare as very few teams at the top level, like Liverpool and PSG under Tuchel, press in a 4-3-3 shape. Djurgardens were more concerned about locking the central areas of penetration and decided to provide the wide areas with space. The idea was to obviously push Hacken out wide and give them to use the less threatening zones on the pitch. 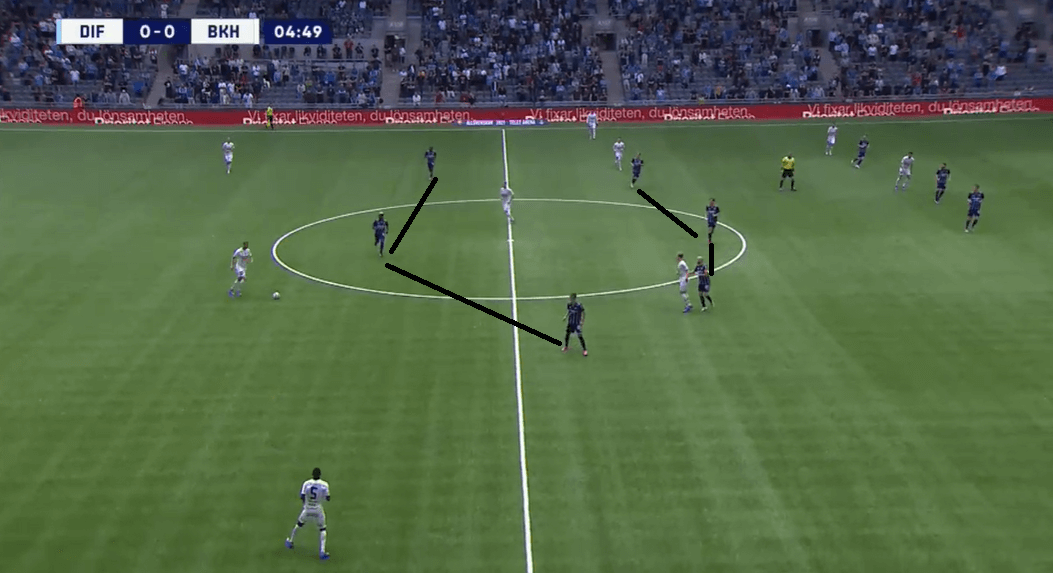 But the most important thing with their off-ball tactics were the use of a more ball-oriented pressing as they would look to overload the ball oriented side more and squeeze out space in that side. We can see an example of this in the image below where Hacken have the ball just at the edge of the middle third and Djurgardens have positioned themselves in a ball-oriented fashion where they have overloaded one side and underloaded the opposite side of the ball. The Hacken RB in the example is very wide and has acres of space to deal with. 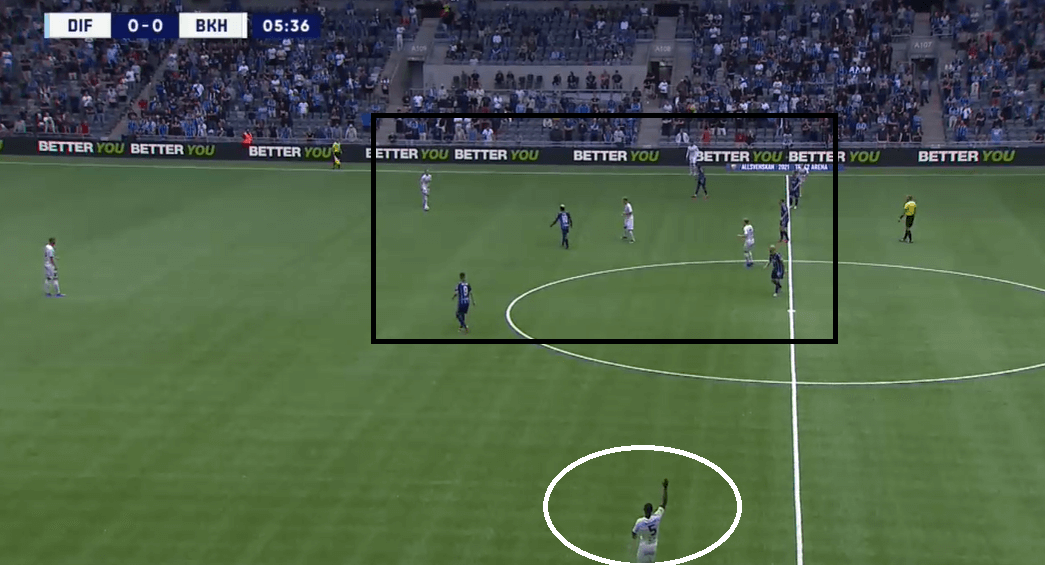 This was something that Hacken enjoyed and looked to make good use of the flaws in their strategy. They would look to start and attract Djurgardens players to one side before using an anchor to shift immediately to the underloaded side. 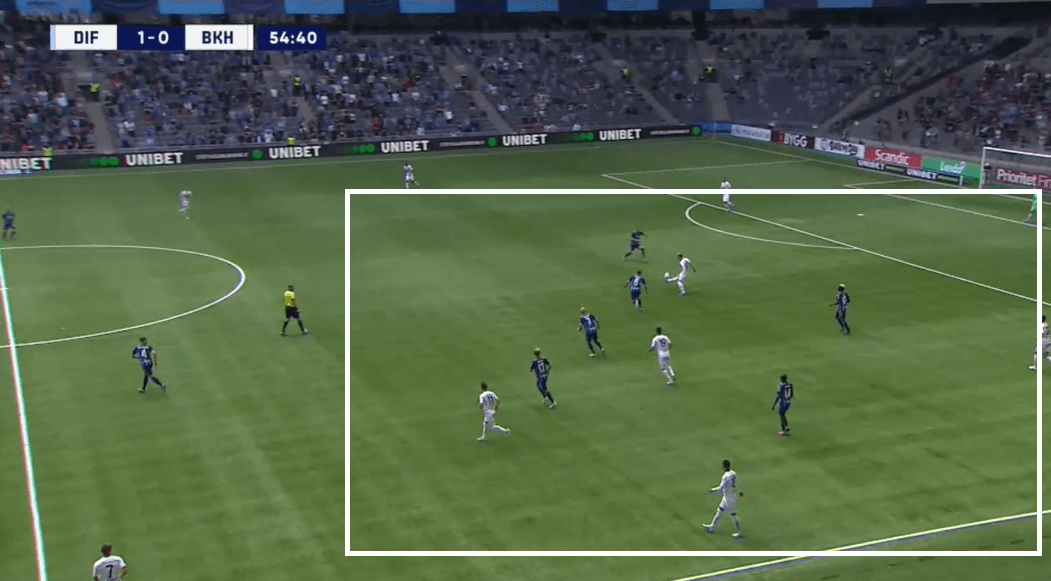 Another thing about Djurgadens press was their players jumped out of the press in unnecessary situations and also whenever they did, their cover shadow was pretty poor to where the passing lanes weren’t closed efficiently. We can see an example of this where a Djurgardens’ midfielder has moved up to press a Hacken player but the pivot closer to him is left free and the CB can now play the ball to the CDM who can now access the forward behind the Djurgardens midfielder. Numerous times Djurgardens got played around due to their uncoordinated press in those instances. 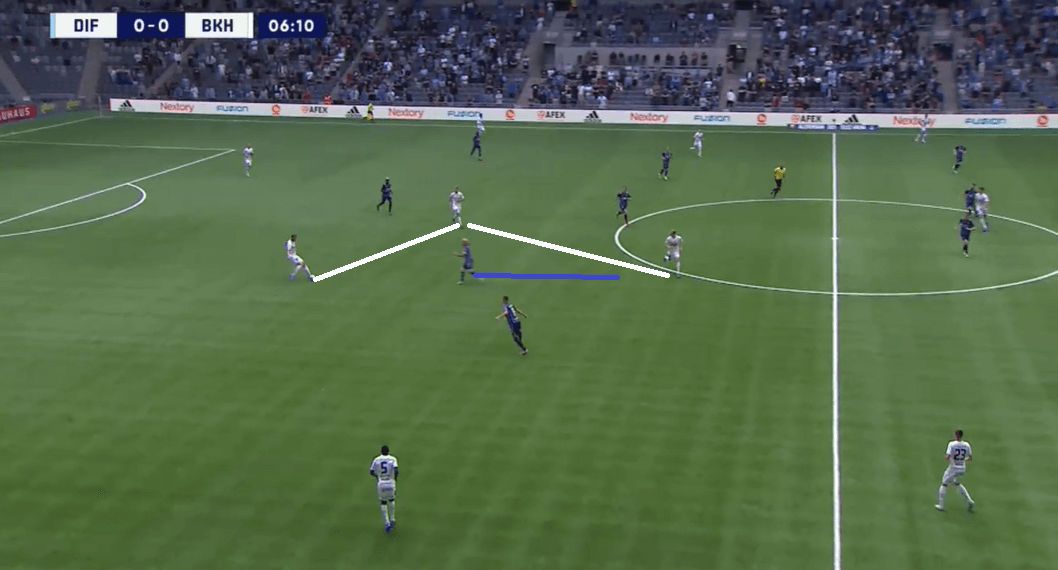 Another example can be seen below where this team Djurgadens are pressing Hacken in the wings and have committed a good amount of numbers to man-mark their opponents. But the passing lanes to one of the Djurgardens midfielder was not closed effectively and RB now has access to him. Once the ball is played to the midfielder he immediately plays a first-time pass to the forward just ahead of him who now has the entire wings to run into. 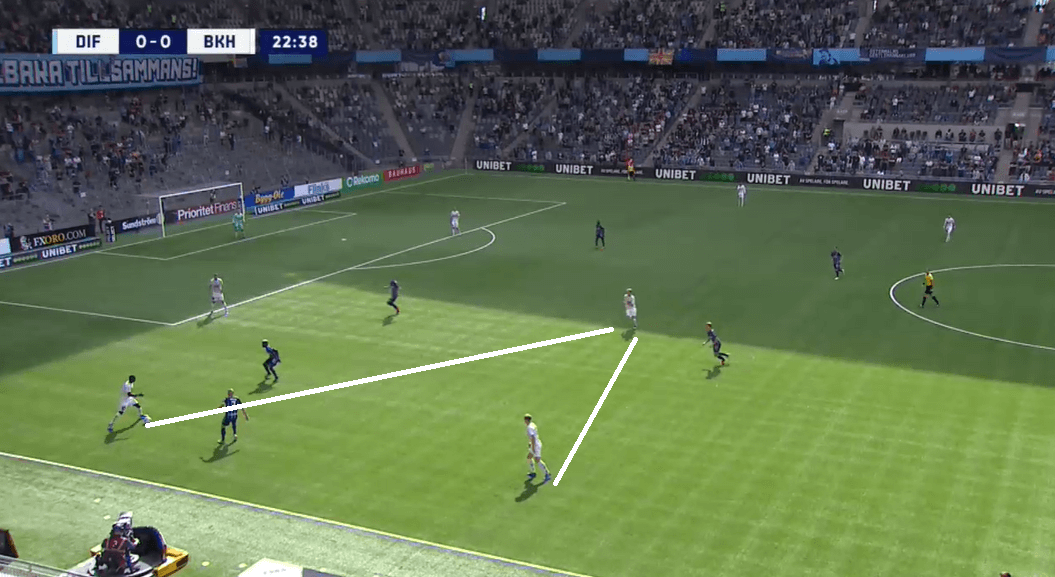 Having less possession, it was surprising to initially see Hacken not going very direct to their forwards and were more inclined towards playing out from the back. But Hacken in the second half decided to make a small change to their tactics where they decided to go long and play direct ball to their strikers.

Whenever the striker dropped deep, he dragged the CB along with him and also another forward make an opposite run into the space vacated by the CB. This was executed a couple of times before it resulted in Hacken equalising. We can see an example of this in the image below. 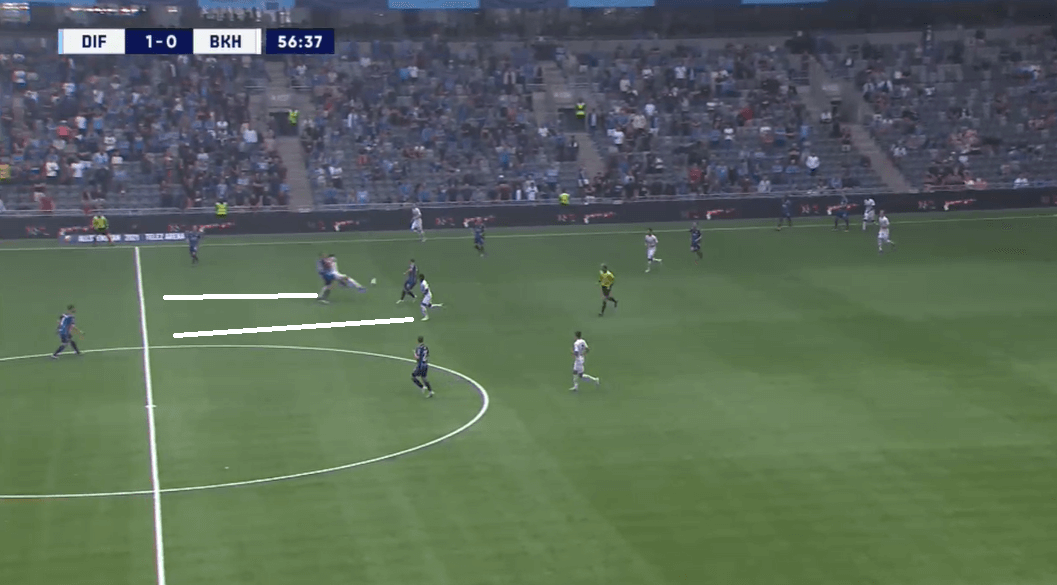 Both teams missed some crucial chances in the game and Djurgardens, the superior team on paper, were able to prevail as they created more chances than their opponents. The win takes them to the top of the league with one point ahead of defending champions Malmo. 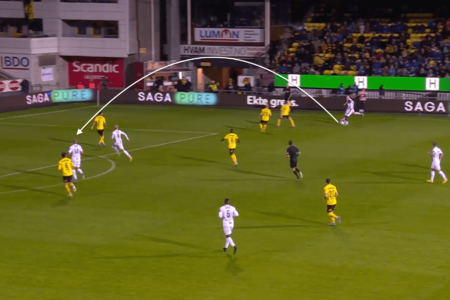 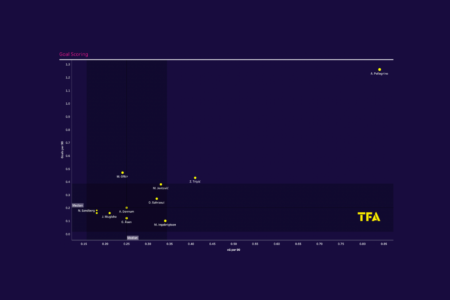