USWNT qualified for the Olympics’ semi-final after beating the Netherlands on penalties in a long match that witnessed great performances from both sides. And although the Netherlands were the team that attacked best during this tournament with the highest number of goals scored, the USWNT’s collective determination and pragmatism prevailed at the end even though only penalties separated the two teams. This match could be the real starting point for the USWNT in the Olympics as they did not look as ready as needed in the group stage. But as the competition progresses, the USWNT will rely on their experience and talent to win the gold if they succeed in beating Canada in the semi-final.

In this tactical analysis article, we will explore what happened tactically in this match by analysing the USWNT’s performance, how they limited Netherlands’ attacks to a certain extent and what should they have done better especially in attack. At the same time, Netherlands’ weaknesses will be addressed without neglecting what went well for them in this match in terms of attacking tactics.

The USWNT started the game with a few changes compared to their group stage games as Vlatko Andonovski preferred to keep Alex Morgan and Christen Press and Rose Lavelle on the bench and sub them on in the course of the game hoping to create a difference, in addition to Megan Rapinoe, who is Andonovski’s usual second-half sub. The team played according to the 4-3-3 formation using Alyssa Naeher as a goalkeeper, Kelley O’Hara, Manchester City’s Abby Dahlkemper, Becky Sauerbrunn and Crystal Dunn in defence, Julie Ertz in front of the defence and Lindsey Horan and Sam Mewis as central midfielders while Tobin Heath and Lynn Williams played as wingers to support Carli Lloyd upfront, a striker who proved in the previous games that she can still be considered as the USWNT’s most dangerous one.

On the other hand, Sarina Wiegman opted for the 4-2-3-1 formation with Sari van Veenendaal as a goalkeeper, Lynn Wilms, Stefanie van der Gragt, Aniek Nouwen and Dominique Janssen in defence, a world-class midfield composed of Manchester United’s Jackie Groenen and Jill Roord behind three attacking players, Barcelona’s Lieke Martens as a left-winger, Daniëlle van de Donk as an advanced playmaker and Shanice van de Sanden on the left wing with Arsenal’s goalscorer Viviane Miedema playing as a striker. 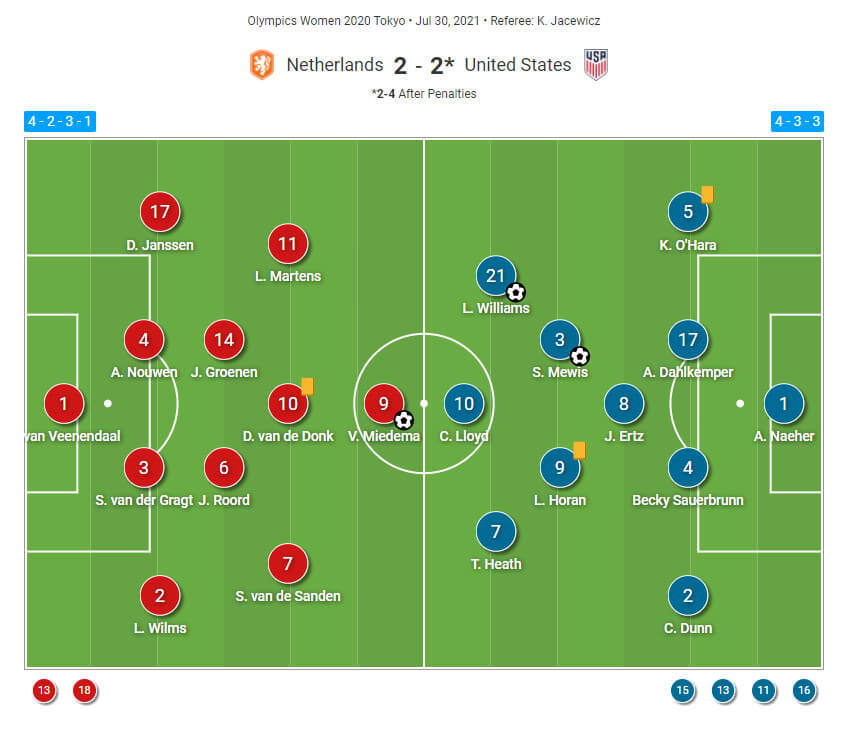 In order to address Netherlands’ attacking performance, one cannot neglect the huge role played by Miedema in goal contribution, this includes goalscoring, playmaking and knowing exactly how to deal with the ball in complicated situations and especially when the decision’s duration is too short. Apart from her technical skills, Miedema excels in taking the right and unexpected decisions, especially when having the ball inside the box.

And since they are aware of that, Netherlands players often try to give their teammate passes in that position to provide her with scoring chances. Something that happened twice in this match and Miedema was able to score beautifully while being surrounded with defenders. Her decision to escape from O’Hara with one touch after it deflected from Mewis and then directly attempt to shoot with a half-volley without even seeing the goal beforehand made this goal look excellent. 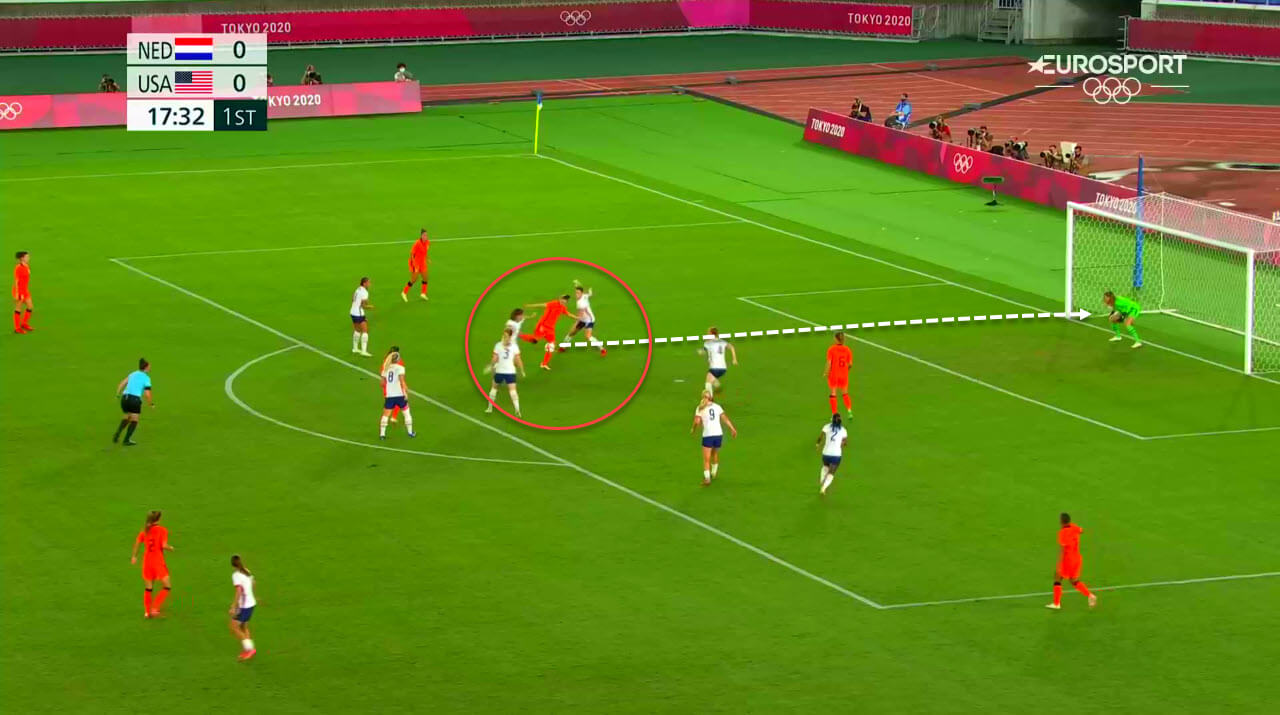 This attacking efficiency could have been exploited further by the Netherlands since they had the chance to score more goals and secure the result especially when the USWNT were behind in score and left a lot of space behind their defensive line. It is true that the Netherlands had a cancelled goal during the first extra time which could have changed everything, yet, they had other opportunities to “finish” the game even in the first half.

The Netherlands’ wingers did not play their best match and were not able to be as dangerous as needed, and this can be explained by two reasons. The lack of determined attacking support by both full-backs was clear as we didn’t see overlaps on the wings. Wiegman preferred to keep the full-backs as retreated as possible to not allow the USWNT to be in numerical superiority when counterattacking, which prevented the wingers from having support and obliged them into looking for simple passes more often in order to not lose the ball.

But despite that, both wingers had the chance to create danger whenever Miedema retreated to act like a midfielder, just like in this example where the latter exploited the USWNT’s use of a high defensive block to launch a counter-attack by providing a pass to van de Sanden. This put both wingers in a 2 vs 2 situation which could have resulted in a dangerous attempt, however, van de Sanden’s decision in the duel with her direct opponent was not successful as it lacked confidence and determination. This lack of ideas was more impacted by Martens passive off the ball movement which did not give options to van de Sanden. 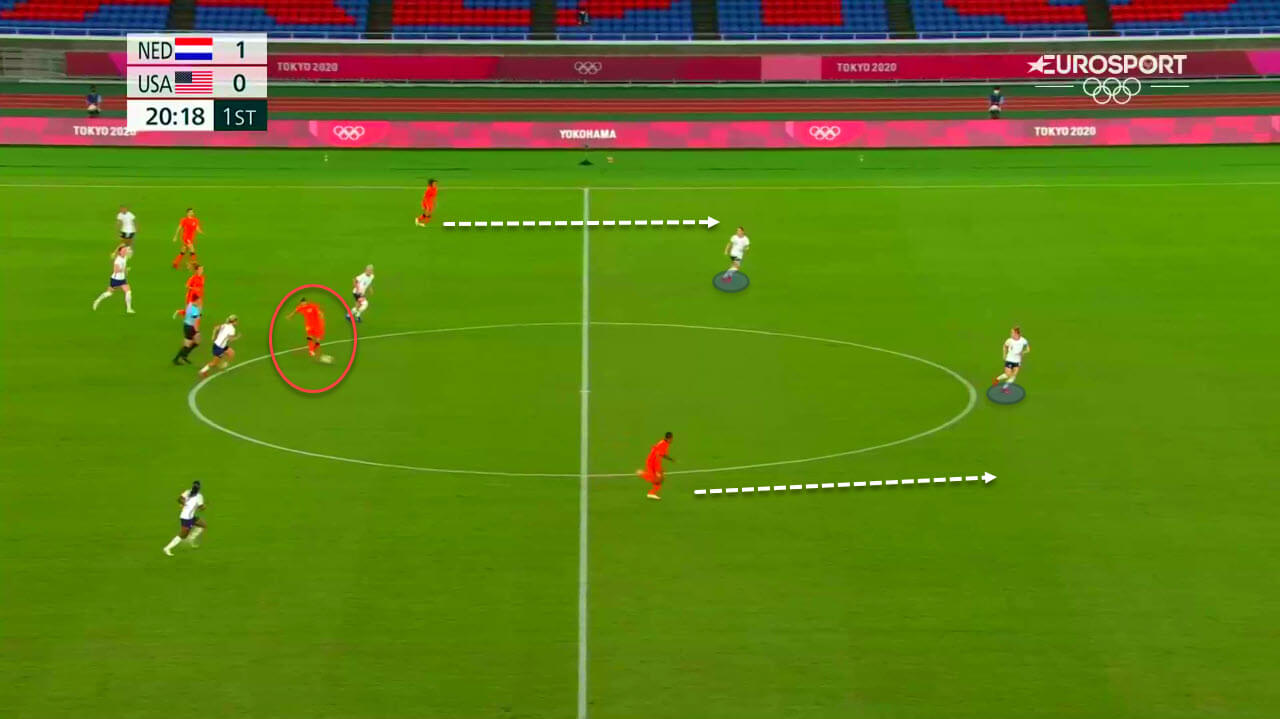 The second reason is that both wingers remained wide when they had the ball and did not try to cut inside with determination or ask for the ball inside the box to create space for their teammates. During the only considerable time in which Martens asked for the ball inside the box and ran towards the free space, Miedema were able to convert that chance into a goal after attempting to pass to Martens. The Netherlands will need to work on this aspect further if they want to be more decisive against top teams since these small tactical details and decisions are what creates the difference in such encounters. Martens’ and van de Sanden’s off the ball movements inside the box can be very useful to Netherlands’ attacks as they would not only give passing options but they will free Miedema from marking especially if she comes from midfield as she often does. 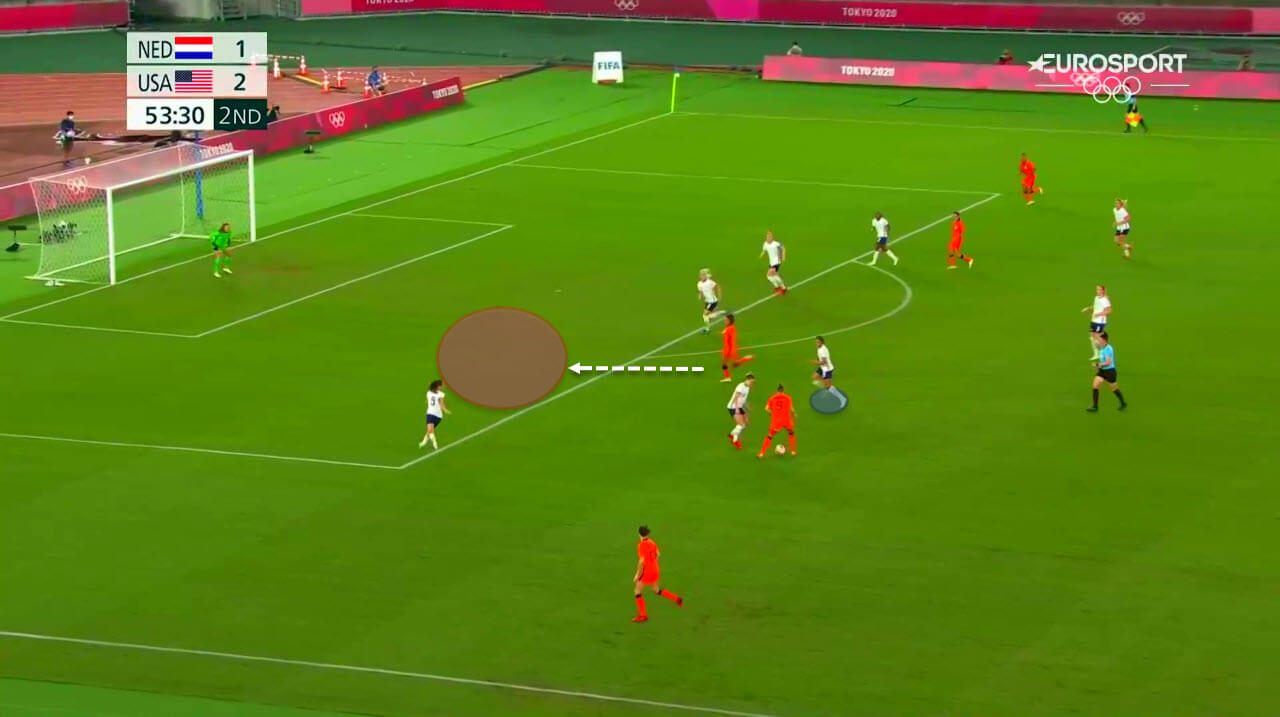 The USWNT’s painful loss against Sweden helped them realise that the level became so close between them and the other big European teams. It also was a catalyst for them to do well and make up for that loss by reaching the final and why not winning the tournament. Knowing that things can get complicated at any stage of the competition made the USWNT players play with further concentration and especially with more discipline. This was noticeable in this match and it helped the team in being solid at the back even after they conceded the first goal. Although at times they risked too much and could have regretted defending with just two players on several occasions, they were able to overcome the difficult moments of the match with success and after scoring two goals they handled the situation with intelligence to keep the result as it is and wait for penalties.

And as opposed to the Netherlands whose midfielders did not advance towards the box a lot, the USWNT’s reliance on key midfielders who are used to scoring goals from the box paid off as both Mewis and Horan are two of the best midfielders in terms of goalscoring abilities. The first goal came thanks to Mewis’ advancement towards the near post and her excellent abilities in the air which gave her team the equalising goal following Williams’ accurate cross. 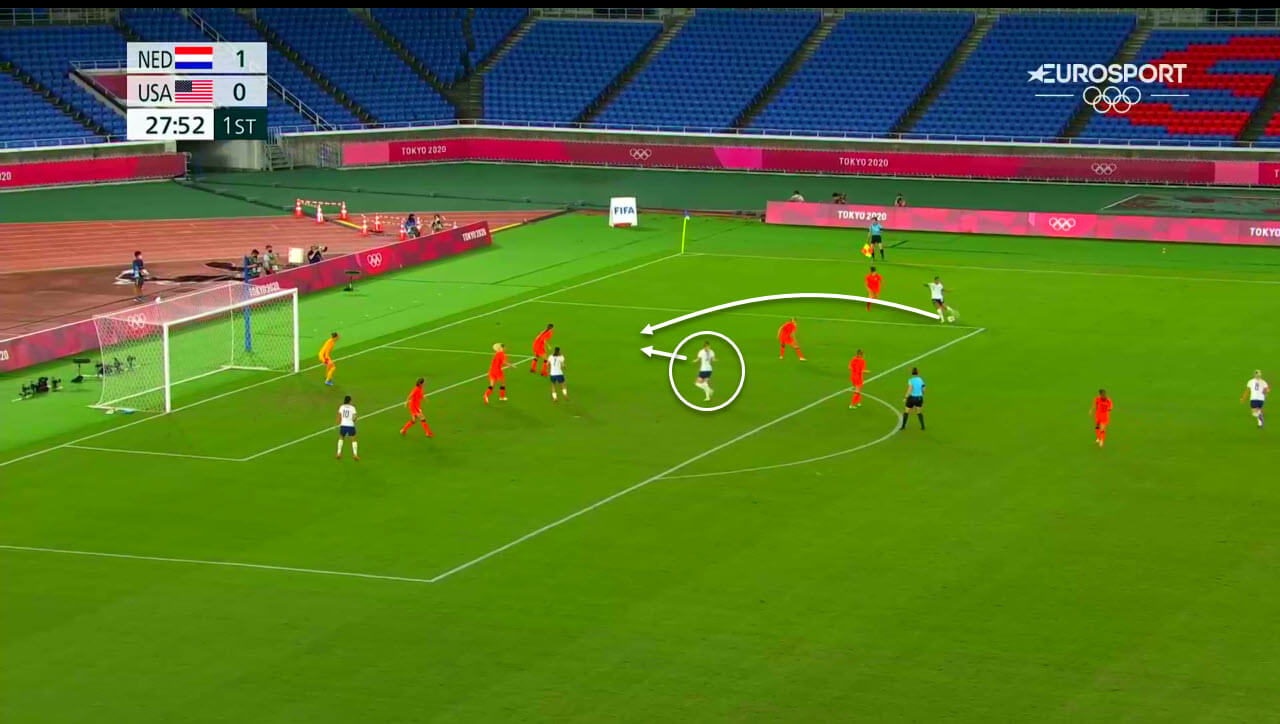 Williams was then able to convert a second ball coming from a corner to a goal that made the situation better for the USWNT. Afterwards, they played with caution to keep the result in their favour by defending and attacking but without leaving the defence empty. The USWNT defended with a 4-2-3-1 formation most of the time with Erceg and Horan in front of the defence and Mewis advancing to press on Groenen and Roord on the same line with Heath and Williams to not allow Netherlands’ midfielders to build up from the back easily. This was relatively successful for the USWNT since the Netherlands were not able to be as efficient as in the previous games from an attacking perspective. 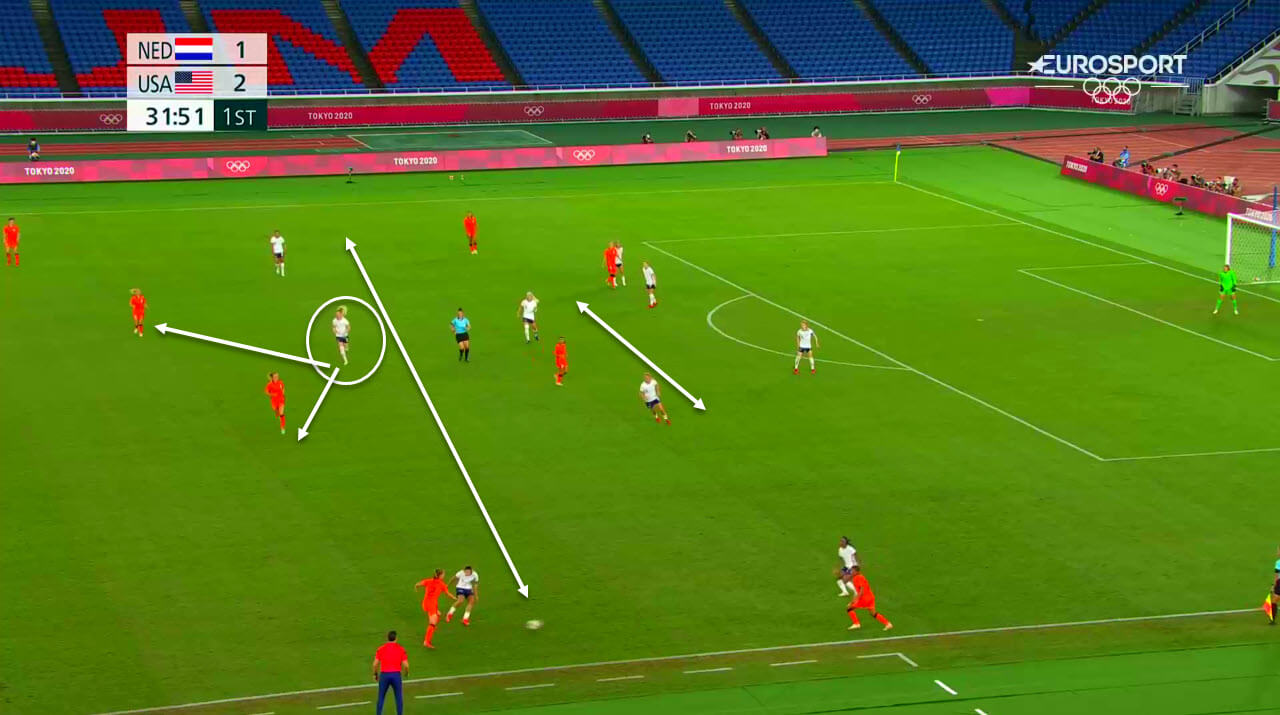 What made the USWNT’s performance even more balanced and consistent was the dynamism of their wingers on one hand, with Heath, Williams and then Press/Rapinoe being consistent in creating danger from those sides. And on the other hand, Dunn helped a lot in playmaking by advancing so often and giving key passes, which helped Heath and Press a lot on the left wing. Press also scored a goal that wasn’t counted due to offside and her addition was notable in attack as she was close to adding the third goal on several occasions.

The USWNT deserved their qualification to the semi-final after struggling to impose their game at the start of the tournament. But now they should remain fresh to beat Canada after they succeeded in excluding the Netherlands thanks to their balanced performance that included solid defending and efficient attacking whenever needed.

On the other hand, Netherlands performed very well in this match too and could have been the winners yet they lacked a little bit of experience at crucial moments, which prevented them from winning. Moreover, they need to increase their attacking plans to score more goals, and this can be done by including wingers and midfielders a bit further in shooting and advancing towards the box especially in games like these since relying on Miedema only for this mission cannot always be sufficient on such occasions even though she always delivers excellent performances and scores goals.