Milos Milojevic is a Serbian coach who signed a contract as the new head coach of Hammarby IF on 13 June 2021. Before Hammarby, Milos had a professional career as a player, playing in the Serbian and Icelandic league before the switch to the first steps as a coach in Iceland. Milos achieved his big breakthrough of success in Swedish football, during his spell at Mjällby AIF.

In Mjällby AIF, he had a very successful period where he first won the Div.1 league (third tier) and the year after won the Superettan (2nd tier), achieving promotion with Mjällby to Allsvenskan in a two year period. The phenomenal achievements of Mjällby generated a lot of attention for the Serbian coach and left Mjällby AIF to follow his dream to coach in Europe and work as an assistant coach for Red Star Belgrade.

Milos is described as a very disciplined and tactically astute coach who demands a lot from his players. He is a coach that prioritizes and periodizes his style of play with an (as he stated himself) 80% tactical focus and the rest 20% for physicality focus. Meaning that he wants to make sure his players are performing tactical actions in the highest possible level of intensity as good as possible as frequently as possible during a game.

Before the appointment of Milos, Hammarby were struggling a lot with inconsistent performances and results in the league, but since the arrival of Milos, they are currently unbeaten in the first seven games which Milos has been in charge of. The past success and solid performances in such a short time makes Milos definitely one of the most interesting coaches to follow in Swedish football.

This tactical analysis will provide an analysis of the tactics of Hammarby IF coach: Milos Milojevic.

The most significant strength of Milos philosophy is that he is very ”opponent oriented”. This means that he is very flexible in regards to his set-up and structure against specific opponents and tries to find different ways to disturb opposition structure while defending and create advantages against opposition in possession.

Some of the formations used most frequently in Hammarby has been the man-oriented system of 5-3-2 as seen against Maribor (in both legs) but also against Degerfors in deeper areas, while against a 4-4-2 structured team as Örebro, Milos changed to a 4-4-1-1 in his defensive set-up.

For example against an opponent like Degerfors that plays with a 3-4-3 system in possession, Milos started with an asymmetric 5-2-3 system with man-oriented central-midfielders, which means that Milos is flexible in forcing play wide as the wing-back creates access in his positioning to press opposition wing-back but also force plays centrally as he prioritizes man-orientations in central zones.

Against Degerfors, the struggle came when Degerfors positioned their wingers/10s in the half-space areas and pushed up their wing-backs into more advanced zones. In half-spaces, Hammarby tends to push up with a lot of man-orientations on the lateral centre backs in the 5-2-3 system, but against deeper half-space players and counter-movements such as Degerfors, this became harder to control. The solution to this was to drop into a more positional defending 5-3-2 to create more central control and access. 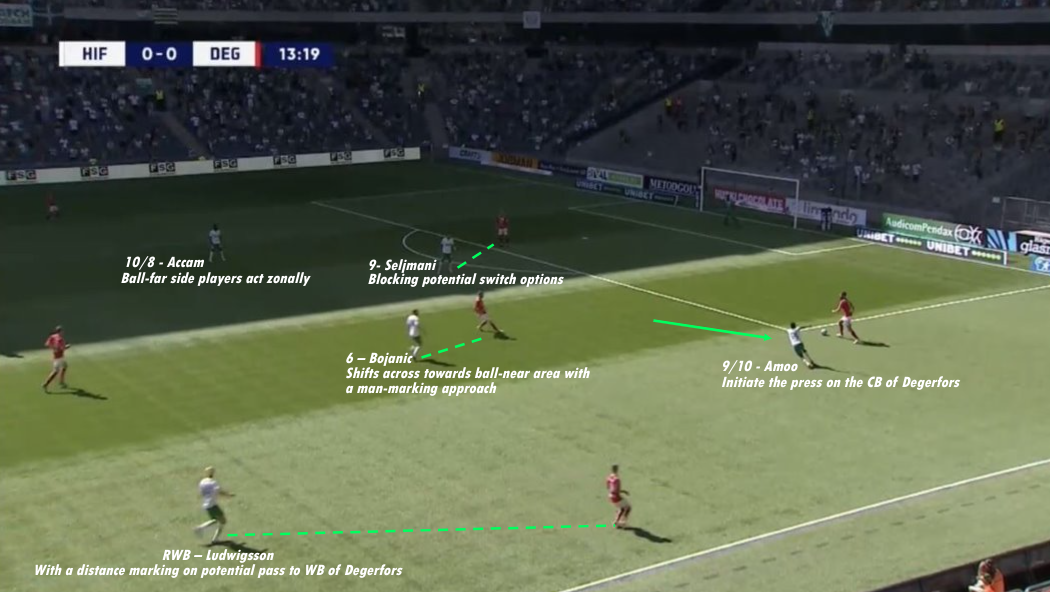 Here is Hammarby in their ”attacking-press” where you can see the roles of the players in an asymmetric 5-2-3 system when trying to press in the attacking press. We can see how ball-near 6 (Bojanic) is man-oriented on the ball-near midfielder of Degerfors, while 9 (Seljmani) is more oriented on the central defender of Degerfors. As the pass is played wide the 10/winger of Hammarby (Amoo) starts his press and the rest of Hammarby acts accordingly as described above.

In the picture above, you can notice how Hammarby leave space behind the midfield which may seem”uncompact” but as they go into more man-oriented focus, if a player of Degerfors was to vacate this space, then the closest of the Hammarby backline to this player is responsible to mark him if a pass is played to this player (same as the later centre-backs which are more aggressive in their marking if opposition plays into half-spaces)

In this sequence, Hammarby is working with a more positional structure 5-2-3 as the ”starting positions” in defence but switches quite flexibly to a more man-marking approach in the right moment for example: closer distances/better access to opposition players. We can notice the deeper half-space oriented players of Degerfors (red team).

And the solution to the lack of access to half-space zones by switching to an asymmetric 5-3-2 after 15 minutes into the game as you can see the ball-far 10 (Accam) drops down as an 8 on the ball-far side. 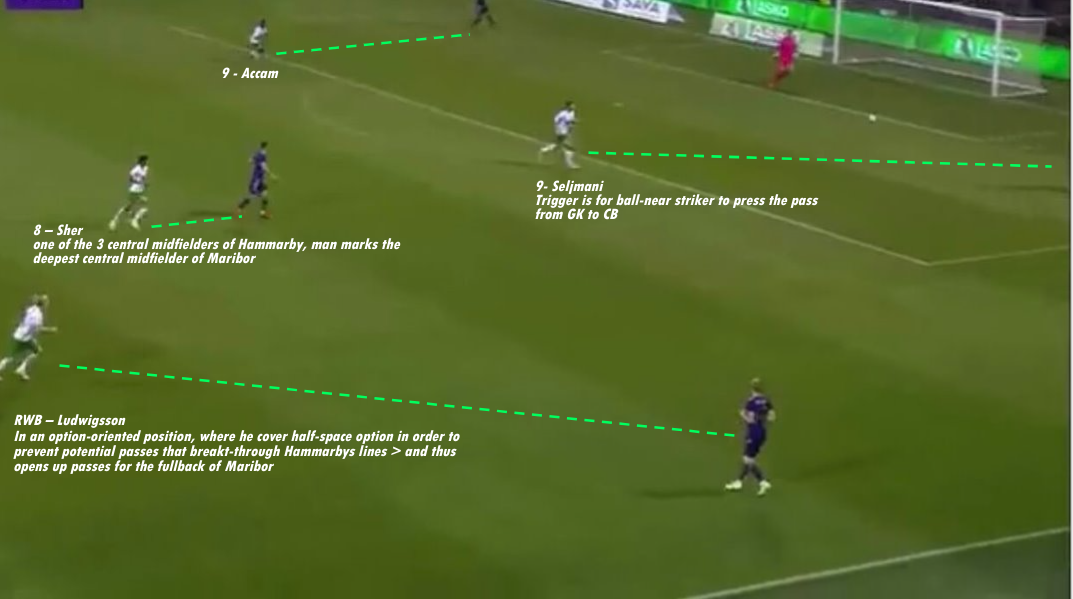 Against Maribor, the ball-near 8 in a 5-3-2 is responsible for Maribor 6 while the two 9s (Accam and Seljmani) can position wider in order to access centre-backs of Maribor more efficiently in press. 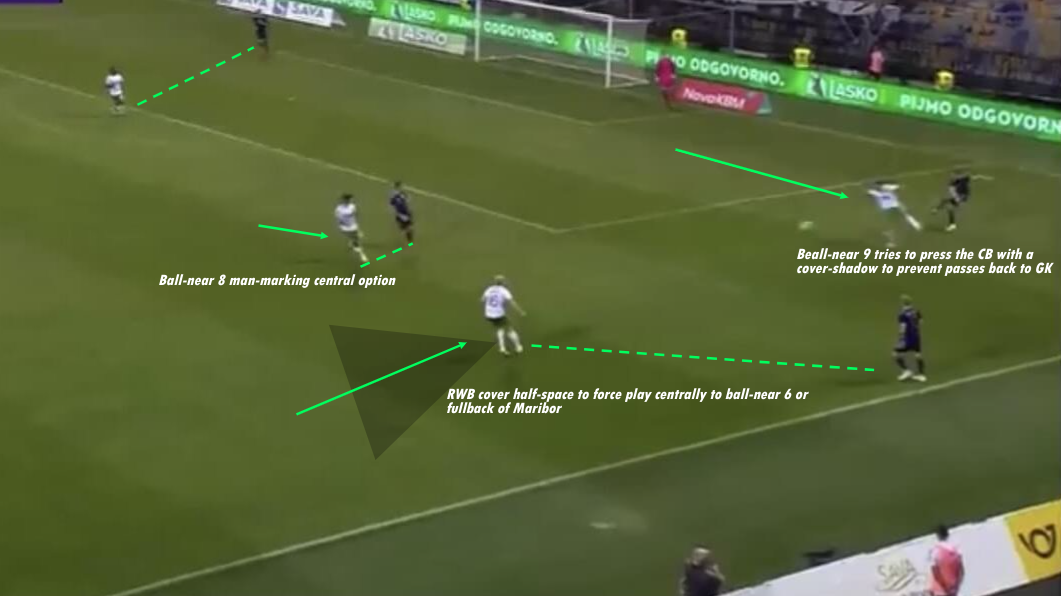 As the pass is played centrally, the #6 and #8 of Hammarby are man-oriented on the two midfielders of Maribor. As against Degerfors, Maribor tried to occupy half-space zones and overload central areas but Hammarby solves this with very aggressive forward defending and man-oriented defending with the lateral centre-backs as seen in the picture above: Poulsen (right centre-back) has shifted across marking Maribors half-space positioned player.

Change to a four backline system 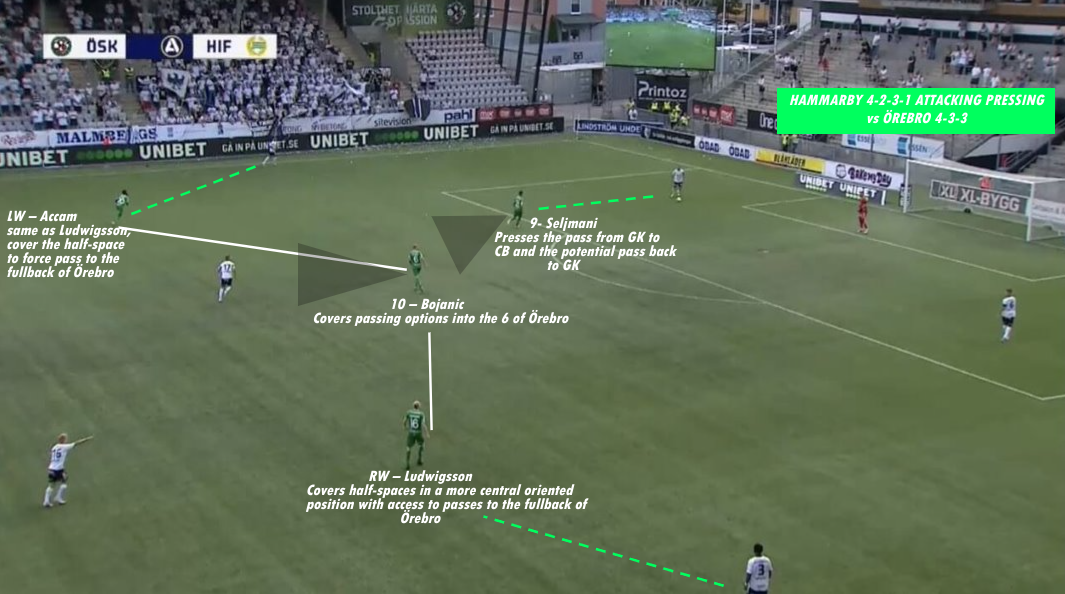 Against Örebro, a team that played 4-4-2 in defence and an asymmetric 4-3-3 in possession, Hammarby structured in a 4-2-3-1 in attacking pressing while shifting to a more 4-4-1-1 in deeper midfield-pressing areas. As in the screen above, the 9 (Seljmani) starts the pressing on the centre-back of Örebro, while 10 (Bojanic) covers passing options to 6 of Örebro. This forces Örebro to a potential switch of play to ball-far centre-back. 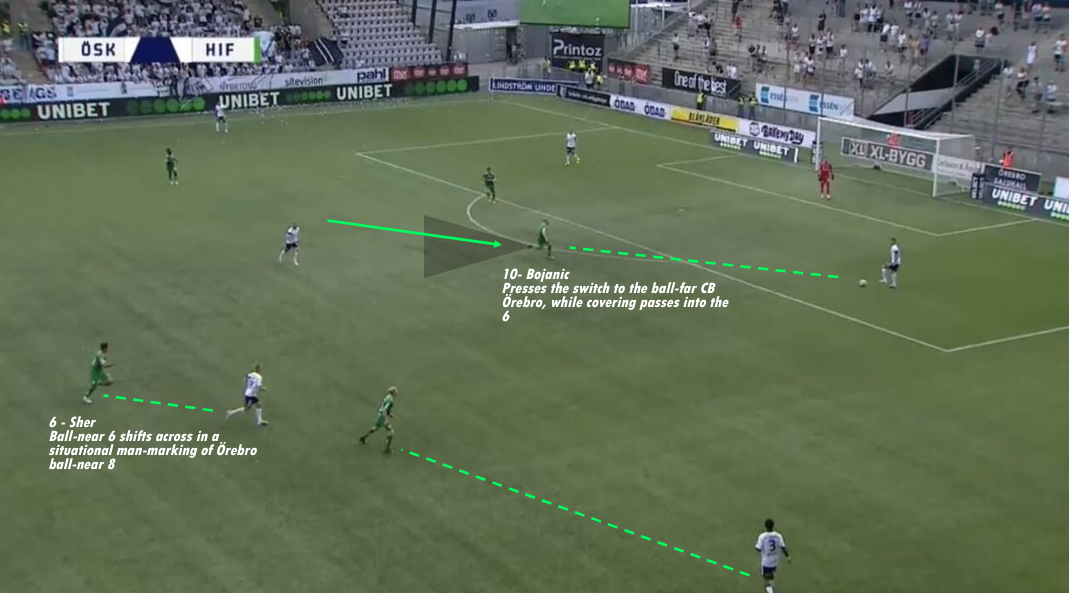 Which the 10 of Hammarby presses, with the same intention as against Degerfors, to flexibly force Örebro to play wide but also be ready for plays centrally with a man-orientation on ball-near six of Hammarby (Sher) against Örebro number eight. 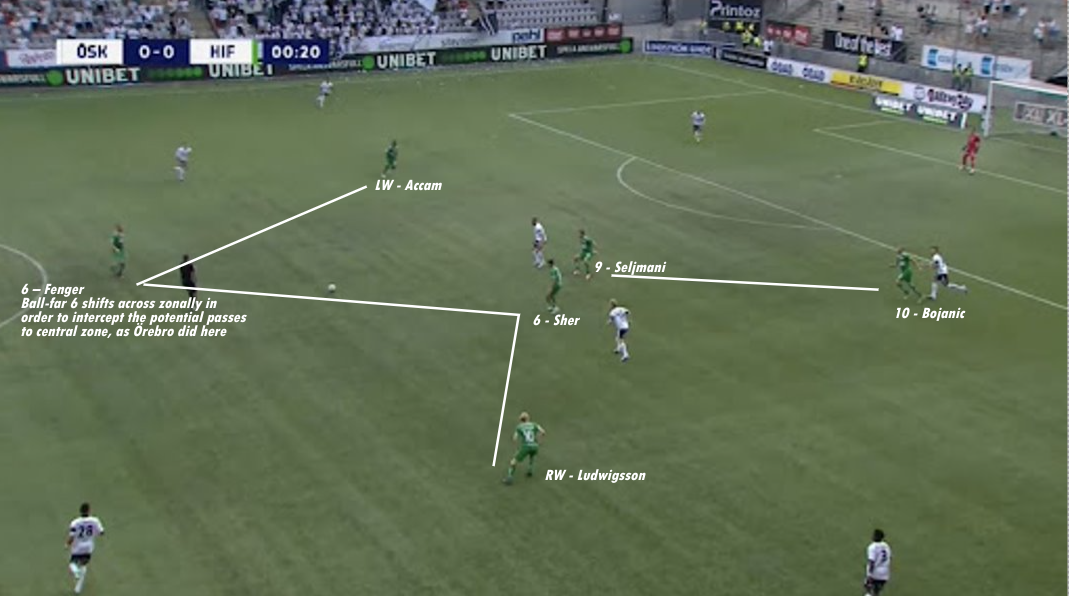 Pass is played centrally by Örebro which the ball-far 6 of Hammarby intercepts cleanly and can from here quickly initiate a counter-attack efficiently which also leads to a goal for Hammarby after 25 seconds of play. 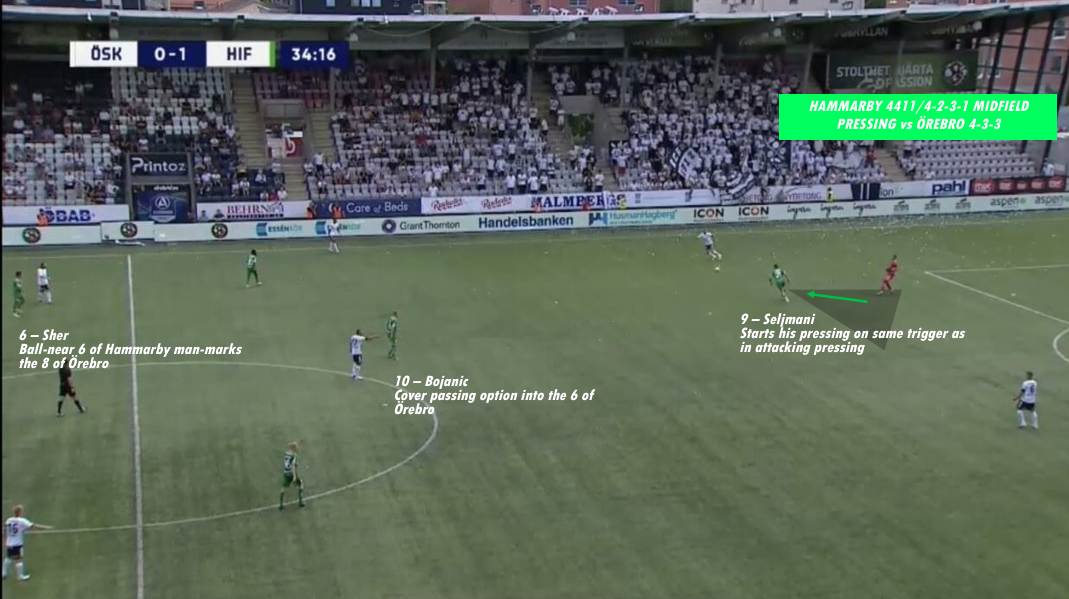 Hammarby in a slightly deeper area of the pitch, in a 4-4-1-1 structure, where 9 (Seljmani) starts his pressing after GK of Örebro plays a pass to ball-near centre-back. Here Seljmani tries to cover the switch-pass back for Örebro and force them either wide or centrally. 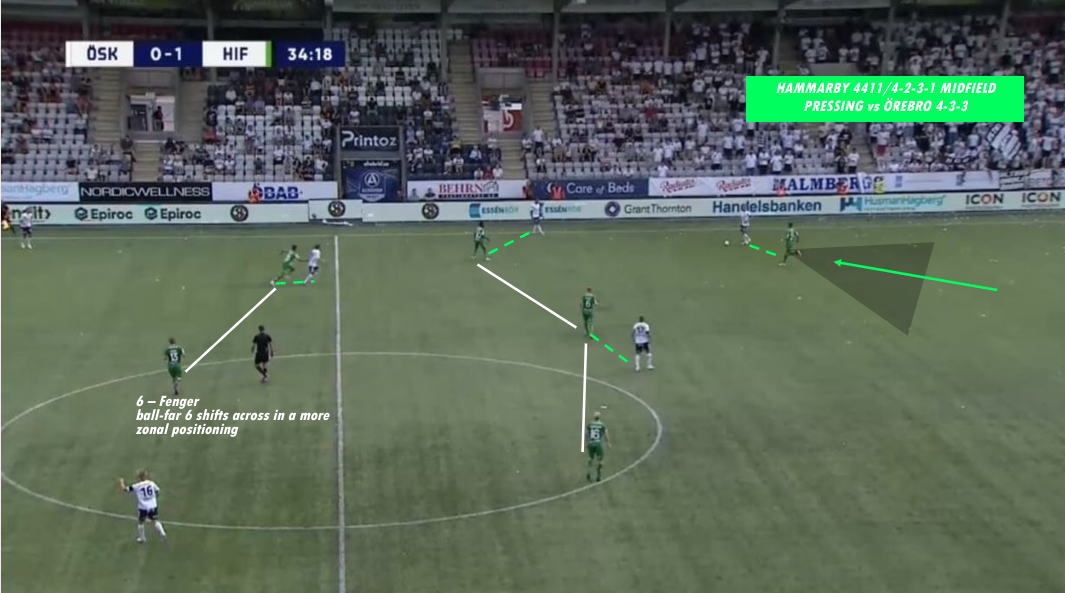 The 10 (Bojanic) covers the passing option into the 6 of Örebro, while ball-near 6 of Hammarby man-marks the ball-near 8 of Örebro.

As we can notice, Hammarby’s option oriented defending creates situations where a lot of space can be generated due to the frequent amount of man-orientations that occurs during the defending phase as players are pulled out of positions and prioritize the opposition player. As seen in the situations above, the compactness vertically is not so prioritized. The priority when the more advanced defending lines of Hammarby has been beaten is for the midfielders to prioritize to position themselves back into proper position by having the ball in front of them again, but if a pass is played between the forward and midfield lines of Hammarby, the backline is then responsible to leave the defensive-line and situationally mark/press the player receiving between the lines. 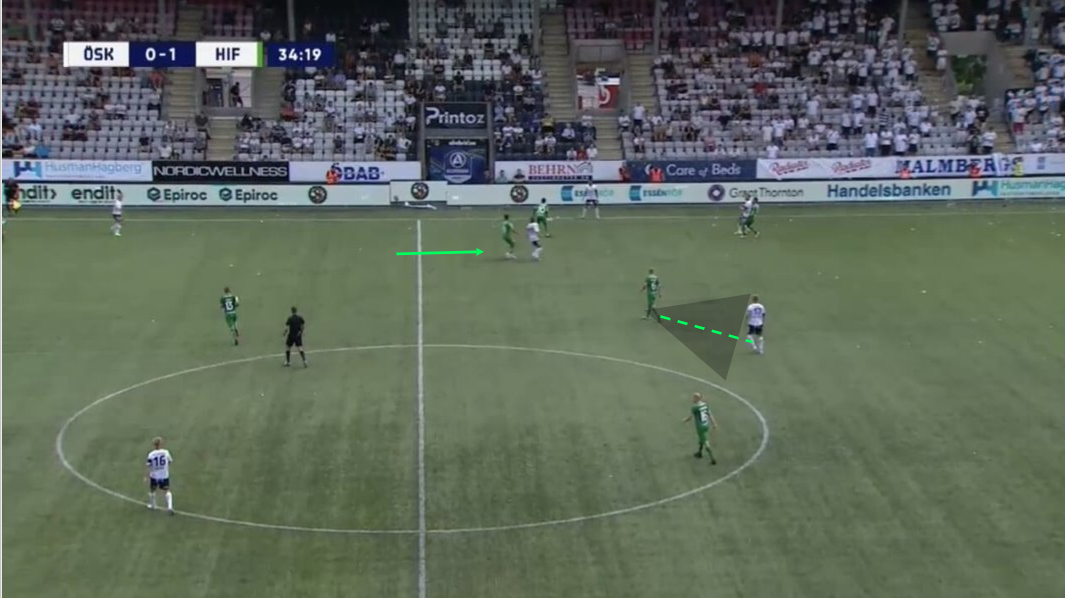 As seen here, Örebro plays to a winger that is positioned between the backline and behind the midfield of Hammarby, but is pressed by a fullback.

Even though Hammarby does not prioritize the concepts of compactness, the option-oriented system causes every opponent a lot of problems and the man-orientation creates faster/closer access to press the potential opposing player and had Ludwigsson who played as the right midfielder in a 4-4-1-1 system, man-marking the potential overlapping fullback of Örebro, which could create a situational 5-3-1-1 system of Hammarby.

The flaw of this system is that it sometimes because a bit too chaotic and players end up being dragged out of positions especially when the opposition overload one flank or half-space and Hammarby then prioritize the opponent when there should be cover behind a pressing player instead. Had there been more fluidity in terms of attacking space and positional rotations with third man combinations, Hammarby would face more problems but has so far with this system has not been exploited enough for it to be seen as a disadvantage as Hammarby actually win back a lot of possession in every phase of the game as they want to exploit opposition with fast counter-attacks.

Another strength of Milos is his ability to re-adjust his structure by quickly reading the opposition structure in possession and adapt accordingly. The changes can be done rather early during a game which makes Hammarby very tough to ”beat” as Milos seems to always be ready to solve whatever problem that may arise during the game.

One of the best solutions was that against Norrköping, as Norrköping tried to overload the central zones by occupying Hammarby central players to position themselves into central zones while playing with two players in wide-zones (push up the lateral CB to fullback position and position the wingback into a higher position, which creates a double-width positioning) the two players on wide zone and one occupying the half-space (their inverted winger). This forced Hammarby’s wing-back press on the fullback to not be able to press the width positioned player or Norrköping in the early build-up as Norrköping played with a double-width system while overloading central zones. This left the strikers pressing both the pass from GK to centre-back but also continuing the press onto the width player, which took too much time and was not so efficient as Norrköping could take the first touch forward and beat the first line of pressure from Hammarby easy. 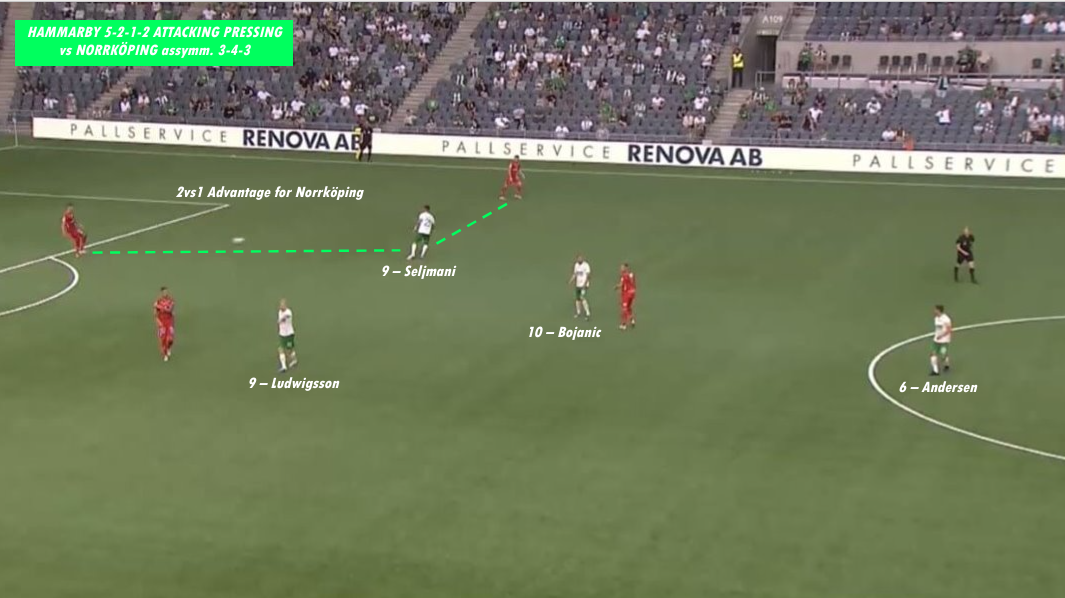 Norrköping creates a local 2vs1 against the #9 (Seljmani) of Hammarby, by shifting their CB into a fullback position. 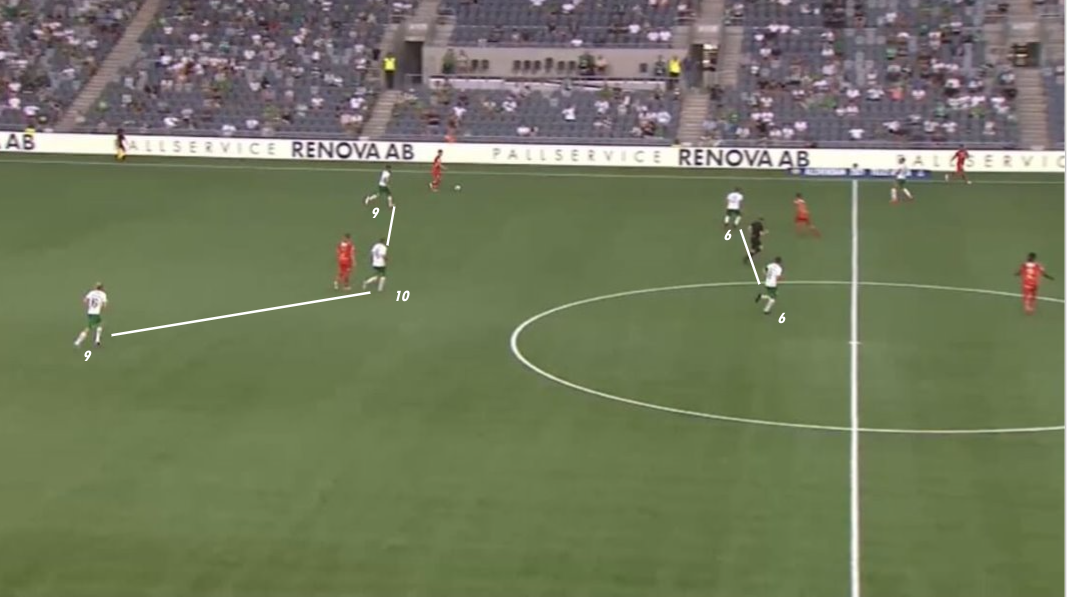 And can (as mentioned) rather easy play past the first pressing line of Hammarby, and as we can see the double width of Norrköping occupies Hammarby wingback to stay deeper in his defending position, which forces Seljmani to track-back and run to press very large distances which were as mentioned not efficient enough. 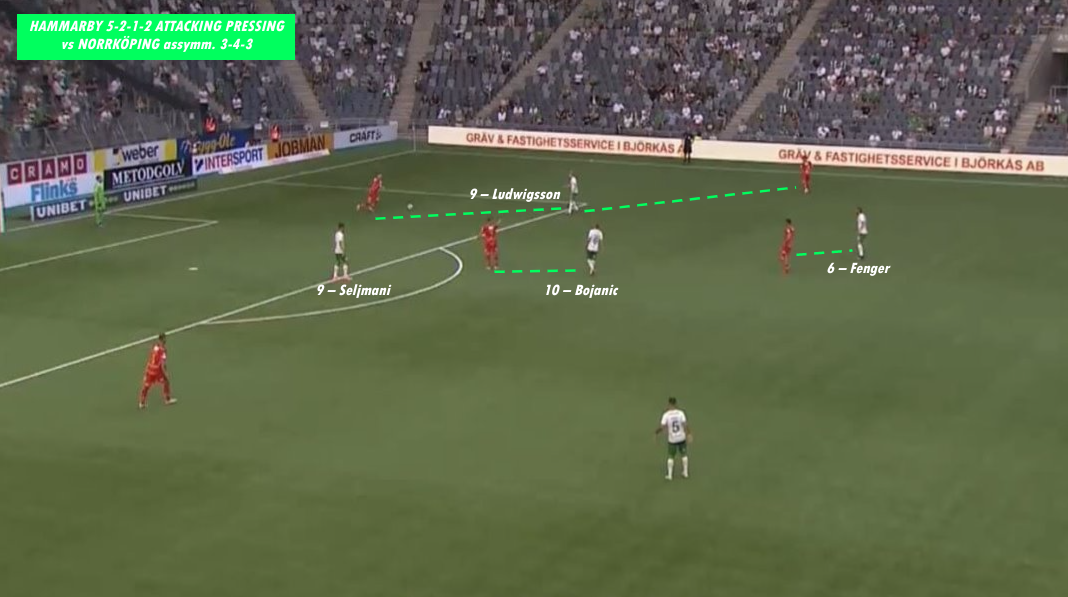 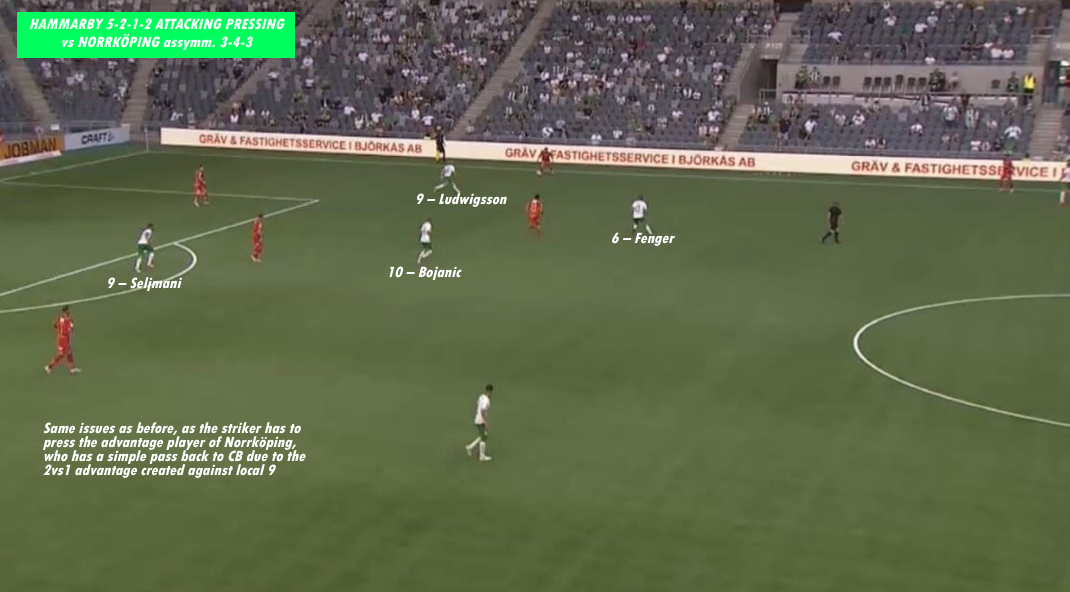 Pass is played to width player of Norrköping who can easily advance with the ball and attack space in front or just play it back to the centre-back as they have a local numerical advantage. 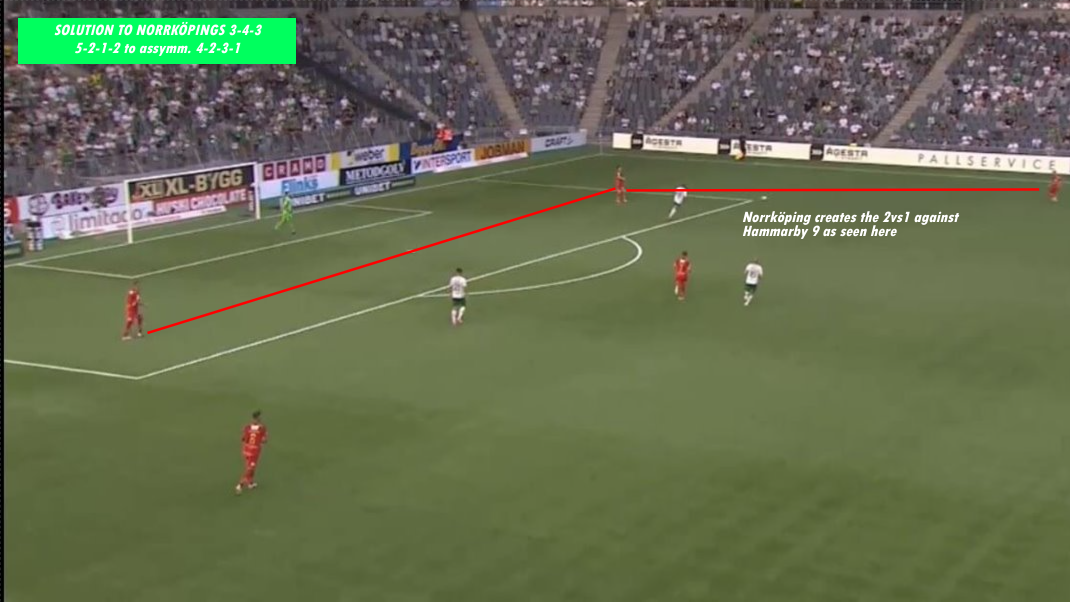 As mentioned, Milos identifies the problem that occurs and adjusts with a more ”clear” coaching of roles in the defending structure to create better access to Norrköpings positioning. 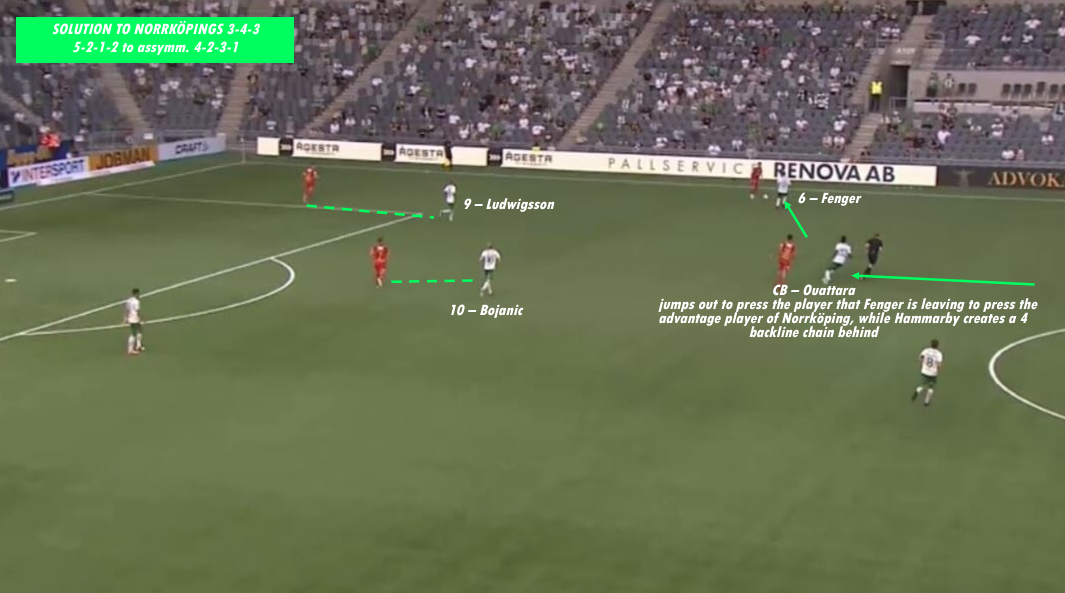 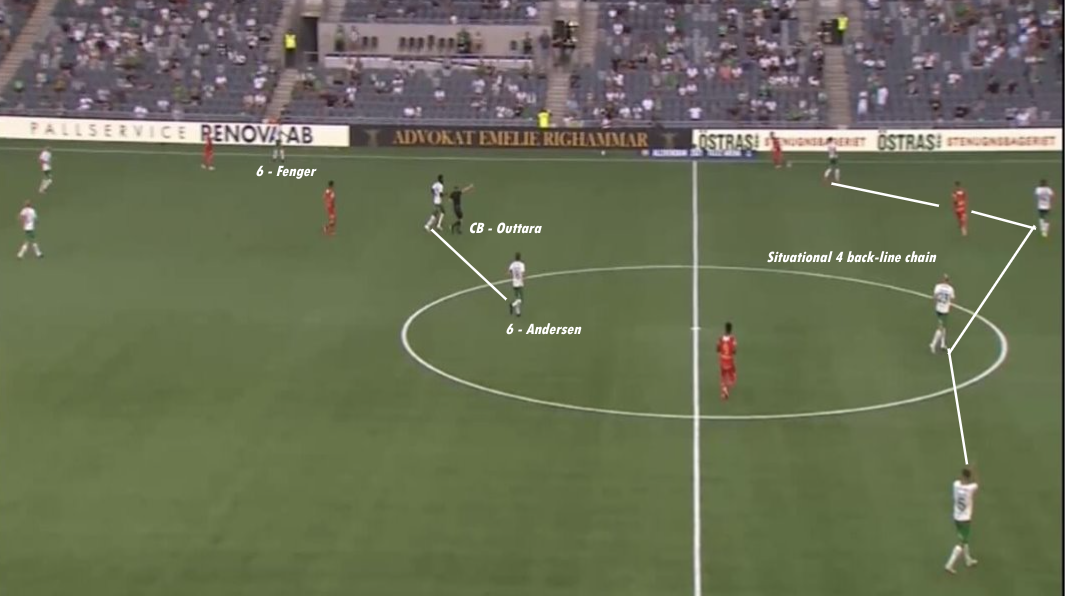 And Hammarby creates a situational four backline chain behind, which created an asymmetric 4-2-3-1 system in attacking pressing. A tactical change that has generated much better access and efficiency in winning the ball back better in this special style of defending that Hammarby is executing.

Milos’ defensive system can be described as more complex, harder to implement, and looks a bit more chaotic than for example a ball-oriented pressing team due to the ”space” opened up between the lines and mixture of roles depending on the situation which as mentioned does drag them out of positions in some situations. Every system has its pros and cons, and Hammarby have so far been very efficient and seems to not only disturb the opposition build-up phase and longer possession spells but also generate a lot of recoveries of possession which makes Milojevic defensive set-up with Hammarby even more interesting to analyze.

In part II, I will cover more of Milos attacking philosophy and his rest-defending structure. 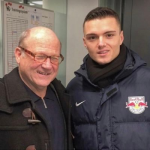 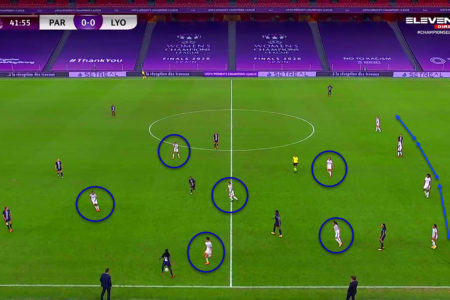 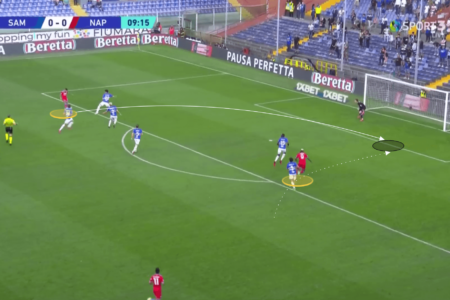 Victor Osimhen scout report: How the Nigerian forward is firing Napoli to the top of the table

Victor Osimhen is a 22-year-old centre-forward currently playing for Napoli in Serie A. He joined Napoli from Lille in Ligue […] 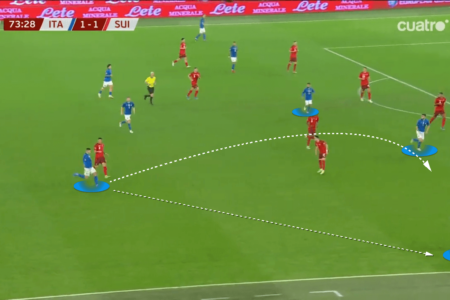 Over the last couple of years, the Italian National team have been through some difficult times – World Cup winners […]