“It wasn’t enough from any of us”: why Team GB fell short against Australia in Olympics 2020 quarter-final – tactical analysis

The women’s football tournament at the Olympics 2020 has reached the knockout stages, with the quarter-finals giving us some interesting results. Team GB faced an Australia side that hadn’t really got going in the group stages, winning one, losing one and drawing one, and so had something to prove, whilst GB were unbeaten in their three group games, so this clash looked hard to call on paper. This tactical analysis will look at how both sides tried to expose each other’s weaknesses, as well as Australia’s strong defensive setup, which was a key factor in their eventual win. 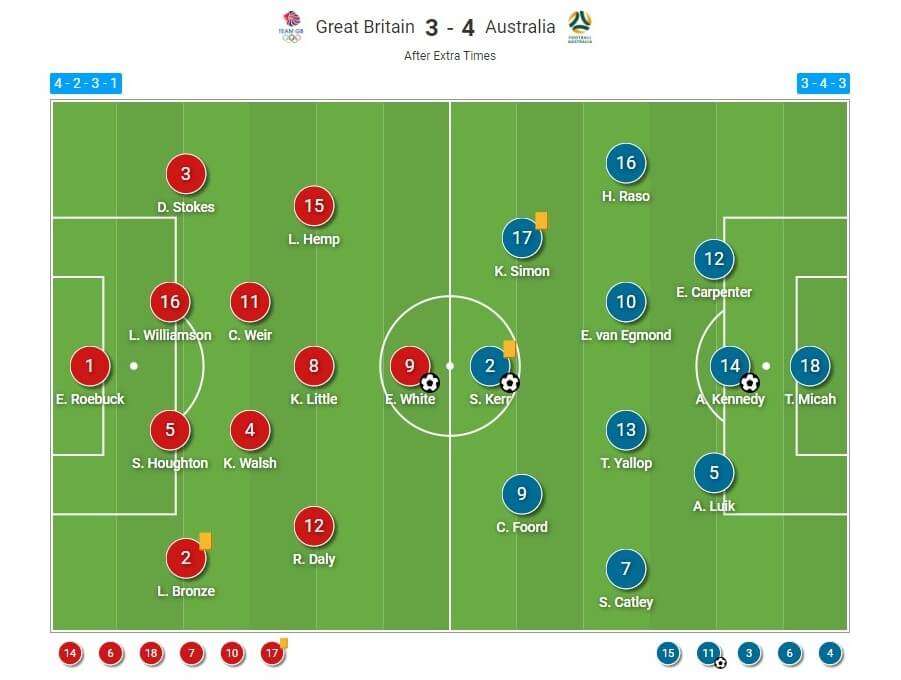 Team GB made five changes to the team that drew with Canada in their final group stage game, restoring many of their first-choice players to the starting XI. Chelsea Women’s Millie Bright and Sophie Ingle, Manchester City Women’s Jill Scott and Georgia Stanway, and new Arsenal Women striker Nikita Parris all moved to the bench. England captain Steph Houghton came in to lead the side, alongside Manchester City teammates Keira Walsh, Lauren Hemp and Ellen White, whilst Arsenal captain Kim Little operated in the attacking midfield role, supporting White.

Australia, meanwhile, made three changes from the team that held the USA to a 0-0 draw in their final group game. Experienced defender Clare Polkinghorne, former Bristol City Women midfielder Chloe Logarzo and teenage forward Mary Fowler all moved to the bench, whilst new West Ham United Women midfielder Tameka Yallop changed from a wing-back role to a central midfield one. Sevilla Femenino centre-back Aivi Luik came in, whilst Everton Women winger Hayley Raso started as the right wing-back (Arsenal’s Steph Catley was in the same role on the left), and Caitlin Foord, also of Arsenal, played alongside captain and Chelsea striker Sam Kerr and PSV Vrouwen forward Kyah Simon, who has been linked with Manchester United Women this summer, in attack.

This analysis will start by looking at Team GB’s tactics in attack, which was much improved and had a better balance with their first choice players back in the team. Against Canada, they struggled to create options in the final third, having to bring on the likes of Ellen White and Kim Little to put Canada under more pressure. However, against Australia, the likes of Lauren Hemp and White got up to the defenders more, ensuring GB always had options ahead of the ball.

This was aided by the fact that their ball movement was better too, with Keira Walsh proving to be key for them in the midfield. She tends to sit back for Manchester City, allowing others to get forward, but operated in a box-to-box role in this match, taking the ball into open spaces ahead of her and passing into the forward line. Her passing was generally very accurate throughout the game, and Australia’s defence had to keep going backwards every time she had possession because they couldn’t let the attackers exploit the space behind them. Having a player who can have that effect on opposing defences is important, and showed what Team GB missed by resting Walsh against Canada.

When the ball got up to GB’s forwards, they looked sharper and moved around with more speed, and Lauren Hemp was one of their more dangerous players. She is a winger who always offers a passing option on the wing but also likes to cut inside and take opposing players on. Against Australia, she constantly made clever runs in and around the defence, trying to force them into making a mistake and opening up an opportunity for Team GB to get the ball behind them.

As well as the individual performances in attack, Team GB also worked well as a team, covering spaces and allowing each other to drift around the pitch. In this case, with Hemp running into the middle, Ellen White has gone out to fill the space on the edge of the Australian defence, and this type of movement to cover each other was a constant feature of GB’s attack in the early stages, as they looked to find a way to break their opponents down.

Team GB did give Australia too much space when out of possession but began to press earlier than they did against Canada. Admittedly, GB had gone one goal down by this stage, but we can see how they tried to take time and options away from the defenders, changing the game and trying to get back into it. This highlights the desire and resolve that we have seen from them so many times this tournament, and that attitude was what eventually got them back into the game in the second half.

Australia’s win was built on their strong defence, and their wing-back setup proved to be essential to it, with Team GB finding it difficult to get into the space behind them.

Playing with a back five when out of possession gives teams different options, such as staying tight and allowing opponents to move around in front of them, or coming out and closing players down, ending threats as early as possible. Australia chose to do the latter, with each defender moving towards the ball when it was in front of them. By coming out early, they stopped GB’s key passers from getting the ball into key attacking players, and we know how important that was, given the improved attacking play that GB had shown in this game.

However, what was really important was the teamwork and communication the defenders showed, with those left in the defensive line constantly covering spaces left open once one player had gone forward. This is an advantage of having five players at the back, and Australia clearly worked on this beforehand, knowing that they would need to stop GB getting too far forward with the ball.

For most of the first half, GB had to resort to passing the ball around in front of the Australian defence, unable to find a way through. However, in the second half, substitute Nikita Parris began to make runs behind the defence, trying to give her teammates something to aim for. However, Australia remained steadfast, clearing every ball that came at them either on the ground or in the air, again showing their organisation and alertness. Therefore, even with new players on the pitch, GB still couldn’t get the ball behind them, and that was a crucial factor in Australia winning this game.

When out of possession, like Team GB, they pressed individual players well, limiting the influence of key players like Kim Little and Caroline Weir. Scotland international Little likes to find spaces and link-up play for her team, and she made the difference after coming on against Canada, but Australia were constantly alive to her threat, closing her down with numbers every time she found a space. As a result, GB couldn’t get up to support the attacks in the second half, compared to the first, when they were getting numbers up the field to offer options ahead of the ball. Therefore, cutting off the service to the likes of White and Hemp was another reason that Australia won this game.

Australia only made two defensive mistakes throughout the game, with both leading to goals for Team GB. This image shows the first, with Tottenham Hotspur Women defender Alanna Kennedy mistiming her attempt to meet the ball, allowing White to head it past Teagan Micah and get GB back into the game. It was good work by White to get into the gap and take advantage of the error, but this seemed to take Australia’s confidence away for a period of time, with GB’s second goal coming not long after this and the result of another error. Overall, however, their defence was well-organised and will give them plenty of hope that they can win games simply by keeping opponents out.

This image illustrates their setup, with Raso and Catley stretching the attack out on either side, whilst Foord, Kerr and Simon are in close proximity centrally. Having three attackers in the middle forced GB’s full-backs to come inside, leaving the wings open for Australia to exploit, and so this was more clever tactical play by the Matildas, creating options for them to move the ball to from the defensive line. Defending has been GB’s biggest problem so far in this tournament, and was their undoing this time as well, as Australia put pressure on them as often as possible, and this again demonstrates their ability to expose opponents’ weaknesses.

We mentioned the threat that Kerr possesses, and she was the main architect of GB’s eventual downfall. The Chelsea striker terrorised opposing defences in the WSL last season, always moving into spaces where teams couldn’t prevent her scoring. Here, she has got between the GB defenders, scoring the equaliser from this position. Despite knowing the danger she poses, GB didn’t close her down quickly enough, instead staying back and trying to limit her sight of the goal. They almost looked helpless as soon as she got the ball in these areas, and that was something Australia played on in extra time.

Head coach Tony Gustavsson introduced Mary Fowler in the second half, looking to exploit the spaces that Team GB were leaving open around the box. One of Fowler’s key characteristics is taking up positions behind the main forward line, and this is exactly what she did against GB. Here, we have a similar situation to the previous image, but Fowler’s addition means Sophie Ingle, in the blue circle, who had come on for GB to add extra defensive protection, has to stay outside the box and away from the defenders.

With Ingle stuck where she is, Kerr gets into the available gap, and the defenders again stand off her and invite her to shoot at goal. Therefore, again, Australia saw the spaces GB were giving them and used them to their advantage, with Fowler undoubtedly playing a key role here, giving Kerr time to meet the ball in the air.

In conclusion, this tactical analysis has shown how Team GB and Australia played out a tightly-contested game, full of tactical battles and interesting game plans. Both sides had good parts to their game, but it was Australia who managed to come out on top. For Team GB, the road ends at the quarter-finals for the second time in the Olympics, with head coach Hege Riise saying afterwards that none of her team did quite enough to win the game. Australia, meanwhile, will face Sweden in the semi-finals later today, knowing they have a good chance of progressing with the defensive strength and clever attacking they showed in this game.