A key part of modern recruitment is understanding how to use data effectively as a part of your process. While I would never suggest that a player, at any level, should be signed purely based on their data profile it is still important to understand the story that the data is telling you. Data can help you to cut through some of the noise created by the sheer number of professional footballers that exist in the game today. Wyscout is an incredibly useful tool for clubs at all levels with their access to video and data but it can be easy to get lost down a rabbit hole of footage if you are not careful.

As a part of Total Football Analysis we offer clubs, players and agencies a consultancy service and a large part of that is built around the use of data and video scouting to provide shortlists of players that fit a specific profile. To do this we make use of a tool that we know as xGOLD. This has been custom-built in-house to streamline the use of data in the identification of talented players.

In a series of articles for the website, I will be using xGOLD to identify players that have similar profiles to a more well-known player in this position. The first profile that we will look at is Trent Alexander-Arnold (TAA) of Liverpool and England.

We should probably start with a disclaimer that this process is not intended as a means to find a player that is exactly identical to TAA. Instead, it gives an early warning of players who are profiling in a similar way to TAA. From this point on we would then carry out due diligence in terms of creating a profile of the player in question and carrying out extensive video scouting.

The profile above is created separately to xGOLD with the use of Wyscout data. On the left-side, we have percentile bar charts that show a player’s performance in metrics that we believe are key to the position in question. The longer the bar, the better the performance. These charts, however, can take a minute to completely understand. First of all team style is an important consideration for any player profile. We can see, for example, that TAA has a relatively poor defensive output when compared to all other right-backs who played at least 350 minutes in the English Premier League. This is partially a result of Liverpool‘s style of play which was still more ball-dominant last season than most other sides in their league.

So, the above gives us a control profile and a for a client who is looking for a right-back who has a similar playing style to TAA we now know what we are looking for. So, on to the shortlist.

Hugo Siquet is an 18-year-old Belgian right-back who is currently contracted to Standard Liege having come through their youth system. Siquet is listed at 178cm | 5’9″ and he is predominantly right-footed.

The young Belgian fullback played 1573 minutes in the Belgian top-flight over the course of the 2020/21 season and he has started the 2021/22 season as a regular part of the first-team setup. When we look at his profile above we will start to see a young player that has certain similarities to TAA although these are mostly in the attacking and passing sections of the profile. Siquet became an important player for his side with his ability to progress the ball forward effectively on the right side of the pitch. He averaged 14.42 progressive passes per 90 with 5.03 passes to the final third per 90 and 6.06 passes to the penalty area per 90. Having also done some video work around Siquet it is interesting that he is also capable of hitting the long diagonal switches that TAA is so well known for.

In the attacking phase, Siquet is also impressive with 5.09 crosses per 90 0.24 xA per 90 and 0.34 assists per 90. The young fullback provides a threat from wide areas with accurate delivery into the penalty area with the ability to float or whip deliveries into the area.

Next, we have Giulian Biancone, a 21-year-old French right-back who has just returned to his parent club Monaco following a very impressive loan spell in the Belgian top-flight with Cercle Brugge. Biancone is a product of the youth system at Monaco and he has had two loan spells in Belgium with Cercle Brugge.

Biancone is listed at 187cm | 6.2″ and he is predominantly right-footed.

Last season saw Biancone play 1648 minutes in the Belgian top-flight. While his attacking metrics are slightly poorer than those we have seen so far from TAA and Siquet his passing and defensive outputs are very strong. In the attacking phase first of all we see that Biancone averaged 4.21 crosses per 90 last season and 3.11 progressive runs per 90. His assists and expected assist numbers, however, are notably lower than TAA.

He is strongest in his passing and progression metrics with 12.34 progressive passes per 90 and 7.75 passes to the final third along with 4.59 passes to the penalty area per 90. Biancone saw a lot of the ball last season for Cercle Brugge and grew into a strong ball progressor for the club. In the defensive phase of the game, Biancone also impressed with 9.83 defensive duels per 90 with a success rate of 66.67% and 4.21 aerial duels with a success rate of 51.95%. This is combined with 6.33 possession adjusted interceptions.

It looks unlikely that Biancone will be loaned out again this season and instead he will start the year as a part of the first-team picture at Monaco.

Denso Kasius is an 18-year-old Dutch right-back who is currently contracted to Volendam on the second year. He is on an 18-month loan from Utrecht having moved to Volendam from this year. Kasius was initially a product of the youth system at Feyenoord before moving first to ADO Den Haag and then to Utrecht. He has yet to make a first-team appearance at his parent club.

Kasius is listed at 180cm | 6′ and he is predominantly right-footed.

Last season saw Kasius play 1443 minutes in the Dutch second tier. He is similar to TAA in that his attacking and passing outputs are far superior to his defensive metrics but similar to Liverpool we tend to see Volendam play in a very possession heavy style. At this point, we have to address the very obvious issue of the level of competition. I am not suggesting in any way that Liverpool, for example, should be looking to sign a player like Kasius in order to move him into their first team. As a player for their U23s though he could become an interesting option. In a similar way if a client club in a lower tier was looking for a player with a TAA profile then Kasius becomes an interesting option.

His passing metrics are very good as he averages 5.36 progressive runs and 3.68 dribbles per 90 with 0.12 assists per 90. Once again though it is his passing and progression metrics that really stand out with 9.79 progressive passes per 90 5.49 passes to the final third per 90 and 4.05 passes to the penalty area per 90.

Matheuzinho is a 20-year-old Brazilian right-back who is currently contracted to Flamengo in the top-flight of Brazilian football. He is a product of the Londrina youth academy but he made the move to Flamengo, one of the true giants of Brazilian and South American football, in 2019. At the time of writing the Brazilian season is underway and Matheuzinho has played 612 minutes with the above data being captured from the current season.

With Brexit having happened clubs across England, in particular, are scrambling to come to terms with the changes to recruitment. While recruitment from the EU has become more challenging though the South American market has opened up and Matheuzinho would be eligible for a move to the UK given his performances in the Libertadores. He is one of the more well-balanced players on our shortlist with good outputs in attacking, passing and defensive metrics without truly standing out in any.

Matheuzinho is an extremely aggressive defensive player who likes to step out in front of the ball as is shown with his 12.25 possession adjusted interceptions.

While there is no doubt that Trent Alexander-Arnold is a world-class player it is entirely possible to find alternatives to the young Liverpool right-back through player profiling and data comparisons. While Liverpool will not be looking to replace him at any point soon there are players out there who would represent viable options to clubs that are looking to adopt a similar style of play to the Merseyside club. 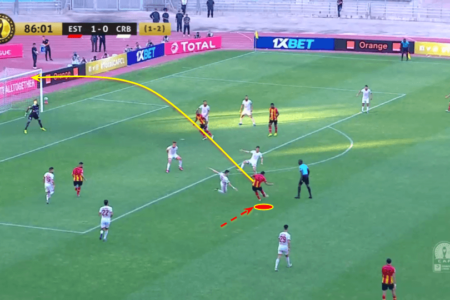 After being the second-top scorer of the CAF Champions League with five goals playing as a central midfielder, Mohamed Ben […] 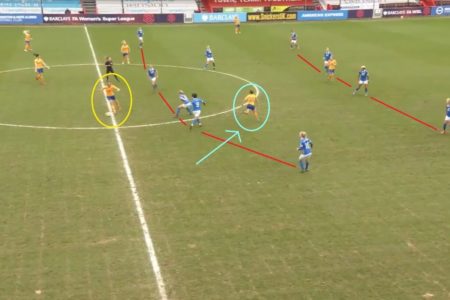 When players like USA internationals Sam Mewis and Rose Lavelle departed Manchester City Women this summer, many feared that Gareth […] 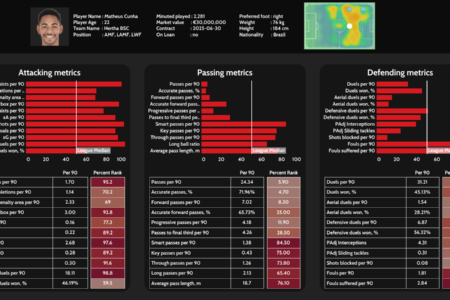 Matheus Cunha’s career hasn’t followed the normal path for a Brazilian player. He came through the academy system of Curitiba […]