Hired in December, and fired in September. Domenico Tedesco’s tenure at RB Leipzig came to an end after back-to-back 0-4 and 1-4 defeats against Eintracht Frankfurt in the Bundesliga and Shakhtar Donetsk in the UEFA Champions League opener respectively. When Tedesco took over from Jesse Marsch last season, he led Leipzig to a historic season, reaching the UEFA Europa League semi-finals and clinching the club’s first ever major title – lifting the DFB-Pokal.

Despite it still being early in the season, the 36-year-old was relieved of his duties after a poor start to the campaign saw him manage only one win in five league games.

In came Marco Rose, the former Borussia Dortmund, Borussia Mönchengladbach and RB Salzburg manager. Originally a Leipzig native, and having worked in the Bundesliga and in the “Red Bull model”, the board decided to hand over the reins to Rose to become the club’s third head coach in just two years.

114 days after his dismissal from Dortmund, Rose lined up against his former club – whom he guided to a second-place finish last season. It was a Rose-y return for the German manager as he oversaw a 3-0 victory over Edin Terzic’s side,  who went into the game as joint-league leaders with 12 points.

This tactical analysis provides insight into how Saturday’s spectacle unfolded. The analysis highlights the key aspects and tactics that were on display throughout. 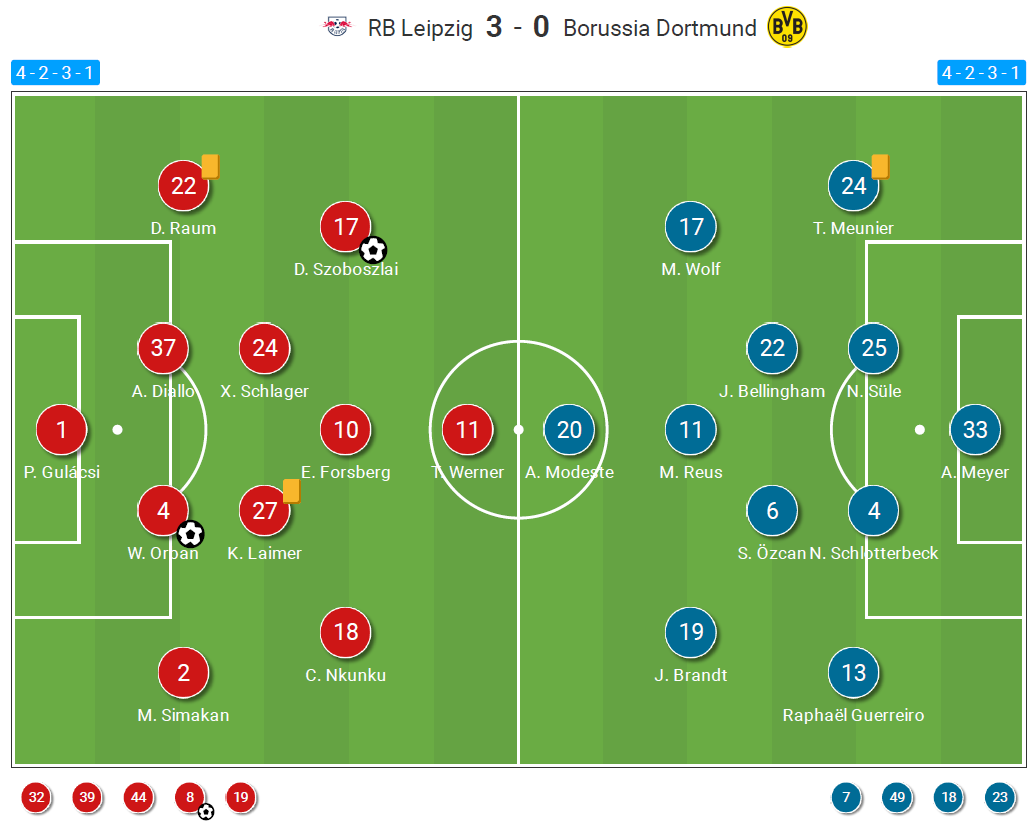 Tedesco gave focus to possession-based play and utilized a 3-4-1-2 formation for the majority of his spell at the helm. Leipzig’s summer transfer strategy did not align with Tedesco’s style of play. The club brought back Timo Werner from Chelsea while also signing David Raum and Xaver Schlager, with the former Wolfsburg midfielder barely featuring under Tedesco. Werner’s strengths rely on pace and having space to run into. His game does not suit possession-oriented teams against low blocks, as was seen throughout his time at Stamford Bridge.

Rose had only 72 hours to prepare for the game, but according to the 46-year-old, the solution had been actually simple — Leipzig needed to go back to their footballing roots. He shifted to a 4-2-3-1 formation, moving Christopher Nkunku to the right and restoring Emil Forsberg to the starting eleven for the first time this season in the place of Dani Olmo. Schlager came in for Kevin Kampl in midfield.

With the absence of Karim Adeyemi, Donyell Mallen, Thorgan Hazard and Sebastien Haller, Dortmund started with Anthony Modeste and Marius Wolf alongside Marco Reus and Julian Brandt in attack. Salih Özcan partnered with Jude Bellingham in midfield while Nico Schlotterbeck lined up next to Niklas Süle at the heart of the defence.

Dortmund started the game brightly with possession and penetration. Leipzig were not too worried about keeping the ball but were more concerned with containing Dortmund and preventing them from getting forward easily.

With the ball, Edin Terzic’s team set up in a 4-2-3-1/4-2-4 depending on the positions of Brand and Wolf. The pair were dropping inside between Leipzig’s centre-backs and fullbacks to create space for Thomas Meunier and Raphael Guerreiro on the flanks. Dortmund’s fullbacks served as the primary outlet and progressive attacking threat throughout the early stages. 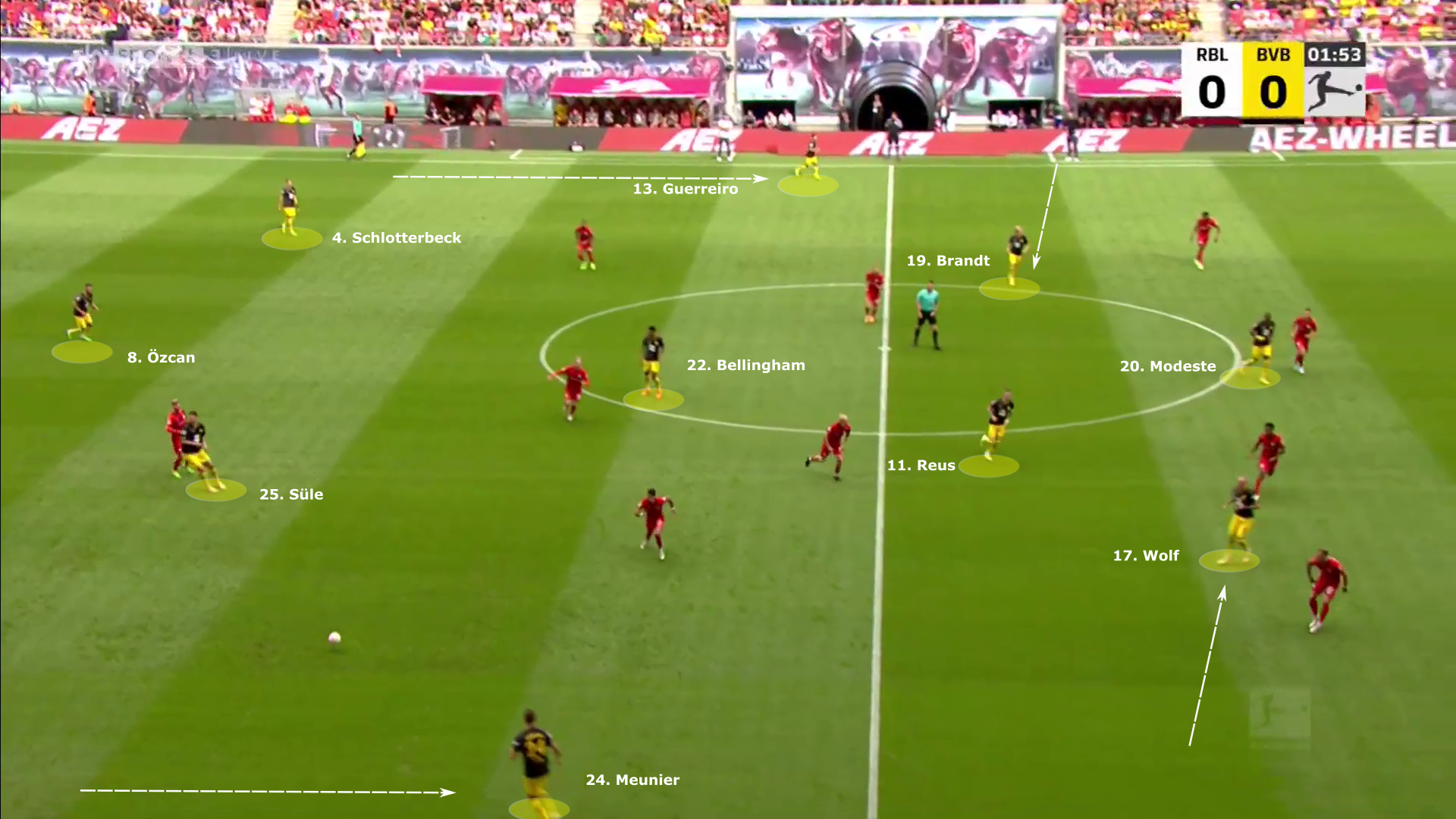 Apart from the first five minutes, however, Dortmund came out second to every ball and started to lose their grip on the game.

They severely lacked flexibility in their possession play, so they failed to pose any serious issues for Leipzig. In fact, this was the first time in three years that Dortmund failed to register a single shot on target in a Bundesliga match.

In possession, Leipzig started their build-up with a 2-2 structure at the base with their centre-backs and double pivot in midfield. The front four stayed quite narrow to allow the fullbacks to push forward, especially the attacking David Raum. Nkunku, playing on the right, would alternate between wide and central areas to stretch the defenders while Szoboszlai, naturally a midfielder, operated in the left half-space and often dropped deep to help with ball progression. 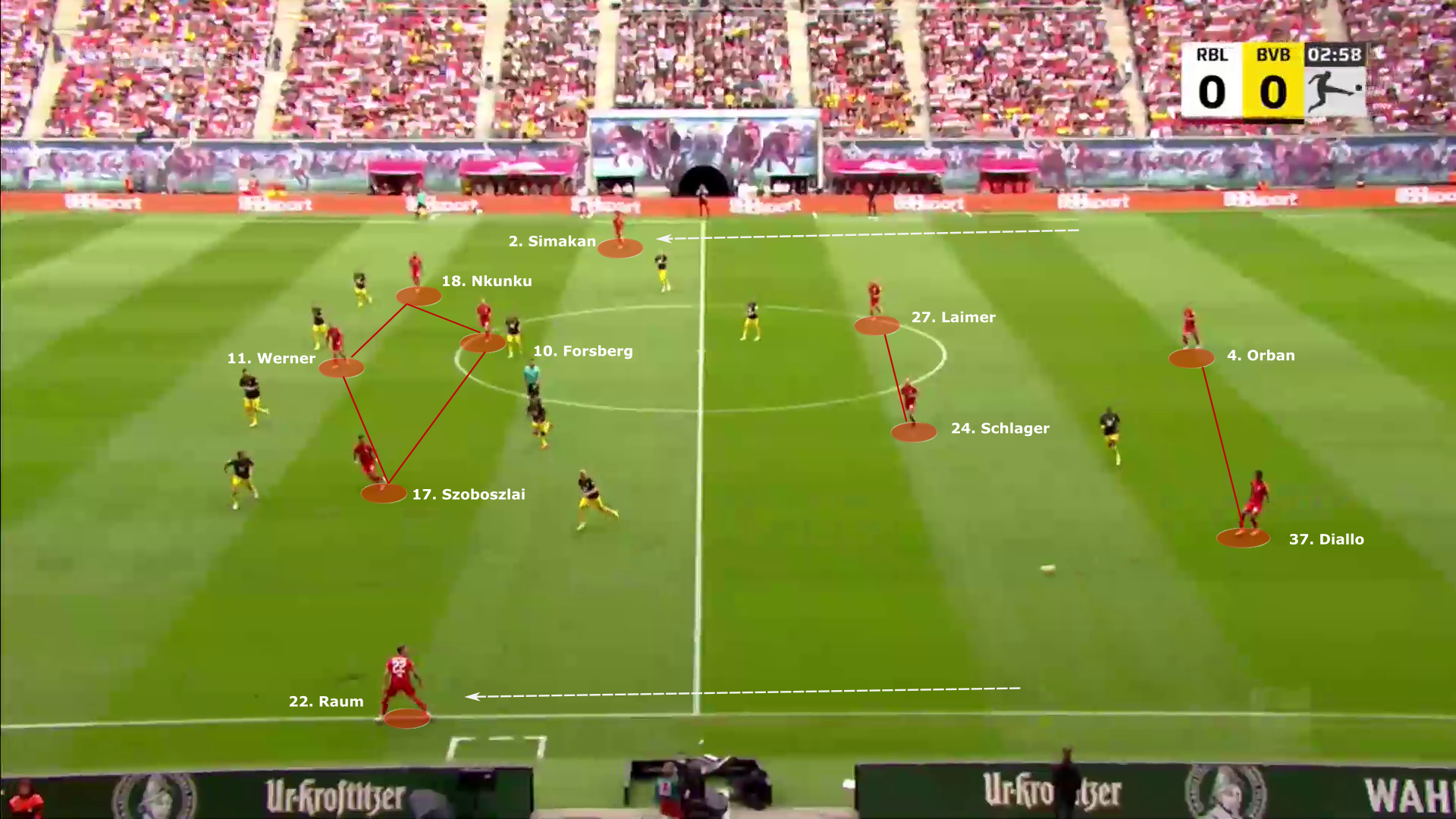 Leipzig’s pass map throughout the game demonstrates the narrow positions undertaken by Nkunku (18) and Szoboszlai (17) while showing the high position of Raum (22) on the left.

Leipzig took the lead in the sixth minute from a corner despite being on the back foot in the early stages. Willi Orban’s header set the pace for the remainder of the game.

Leipzig won using the classic Red Bull blueprint of high-pressure, transitions and verticality. Rose shifted from Tedesco’s possession-heavy approach to relying on transitions for attacking output. The German’s 4-2-3-1 system made for more structured wing-play out of possession and a useful 4-2-4 pressing structure.

Austrian duo Laimer and Schlager won the midfield battle, chewing up space and opponents for fun and then quickly releasing Werner or Nkunku on the break. Timo looked like the Werner of old, finding joy in the open spaces behind Dortmund’s high line.

When pinned back, Leipzig kept both Nkunku and Werner higher up the pitch to be used as outlets in transitions. This is how the first goal was created. Nkunku drove forward on the right-hand side after a regain and played Werner in behind, resulting in the corner. 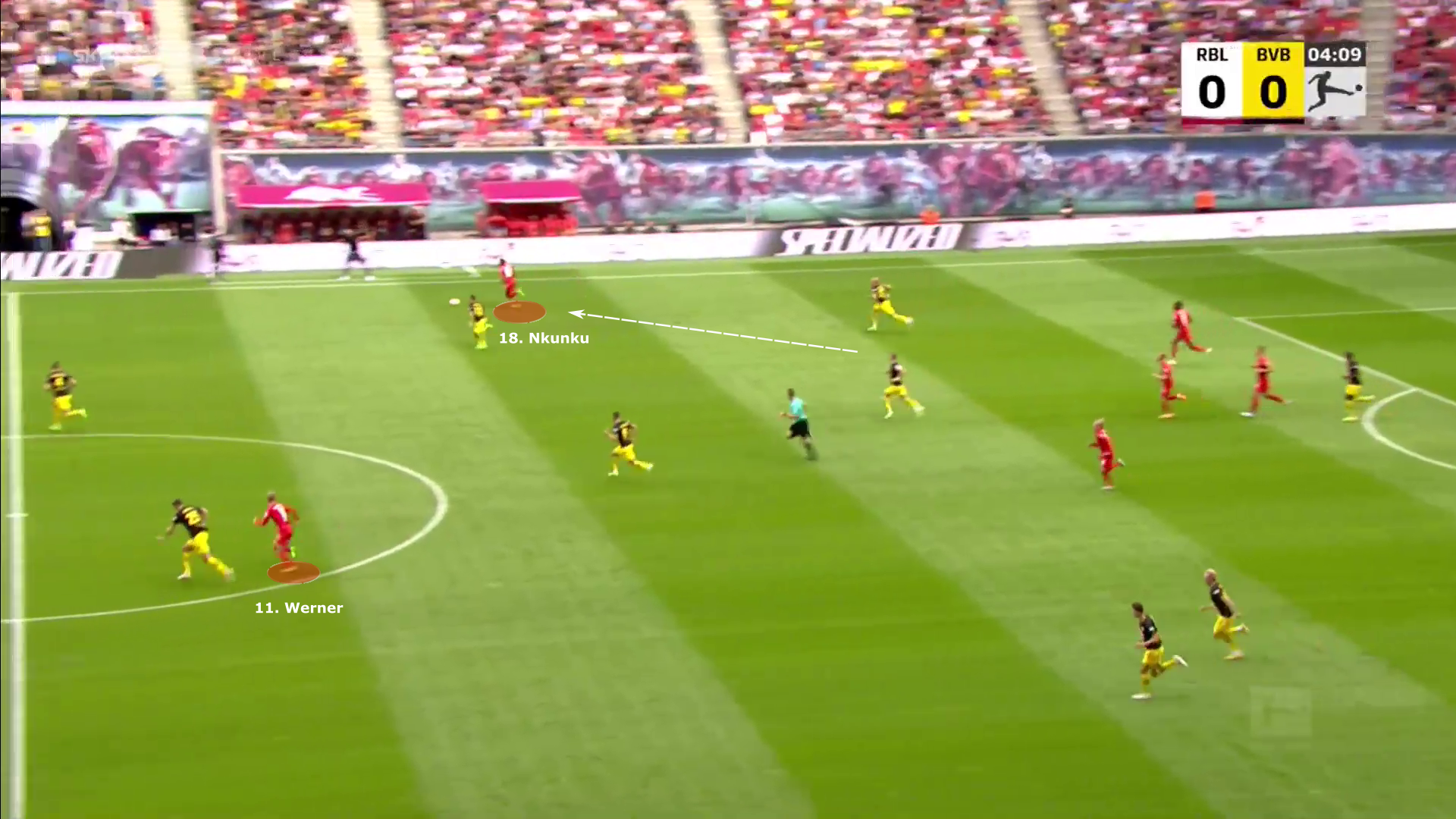 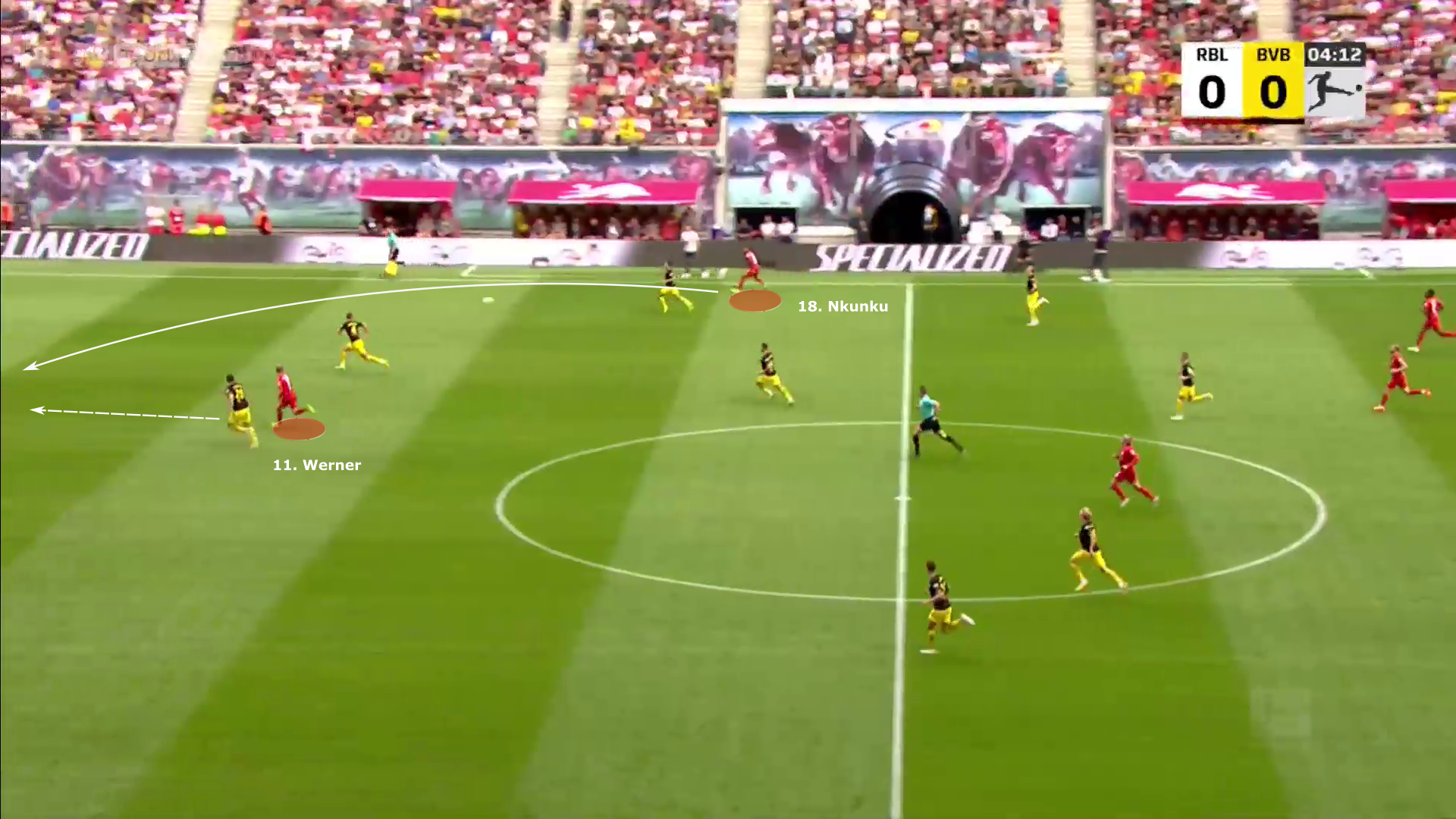 Here, Leipzig defended in a midfield diamond with Forsberg at the tip. The Swede man-marked Özcan whenever he was in midfield. Nkunku pushed forward as he was tasked with pressing Nico Schlotterbeck when he received the ball, whereas Szoboszlai stayed back as he concerned himself with Meunier.

Schlotterbeck plays it to Özcan and Forsberg goes all out to pressure him. 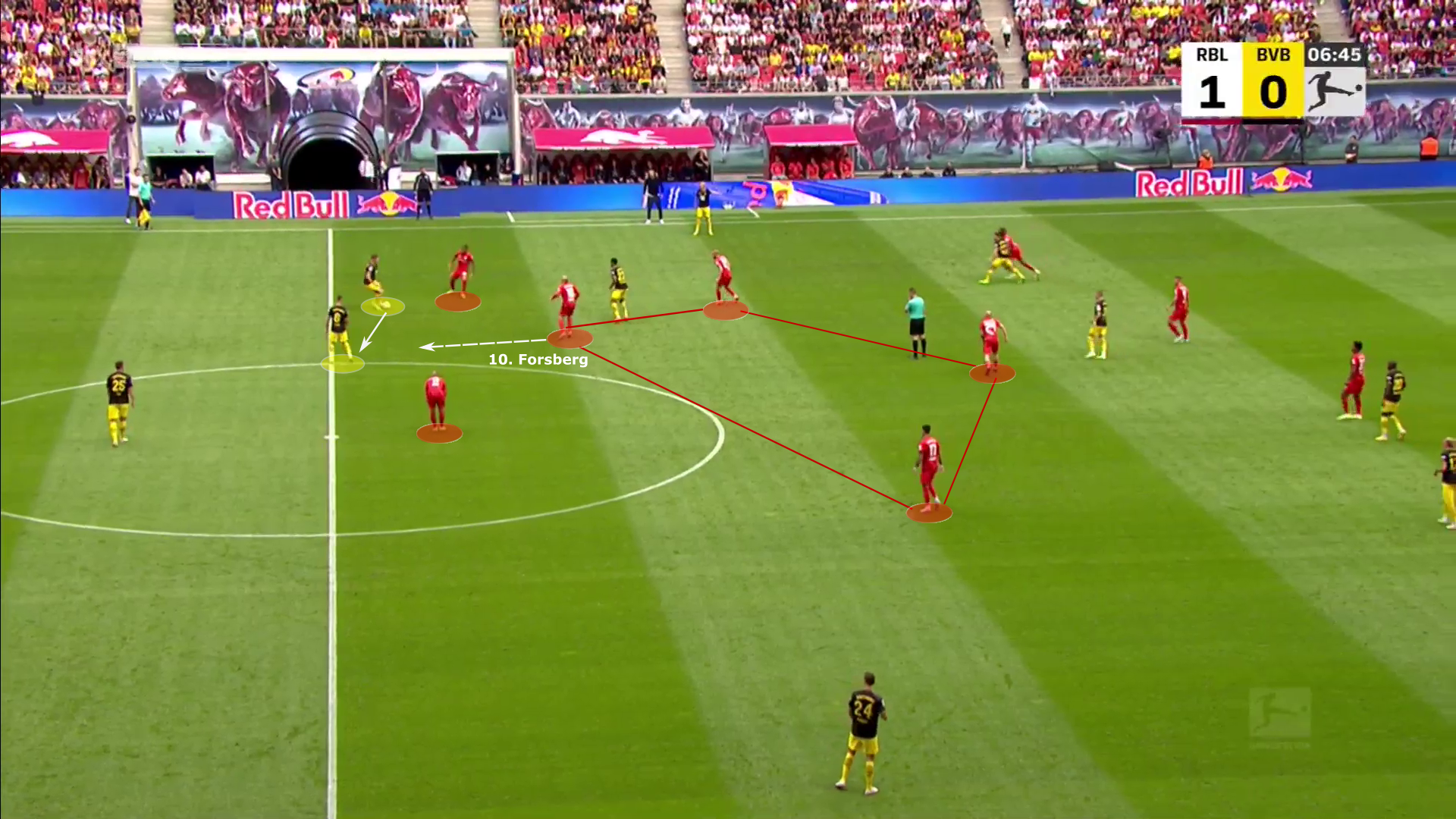 Forsberg wins the duel and nicks the ball to Nkunku. 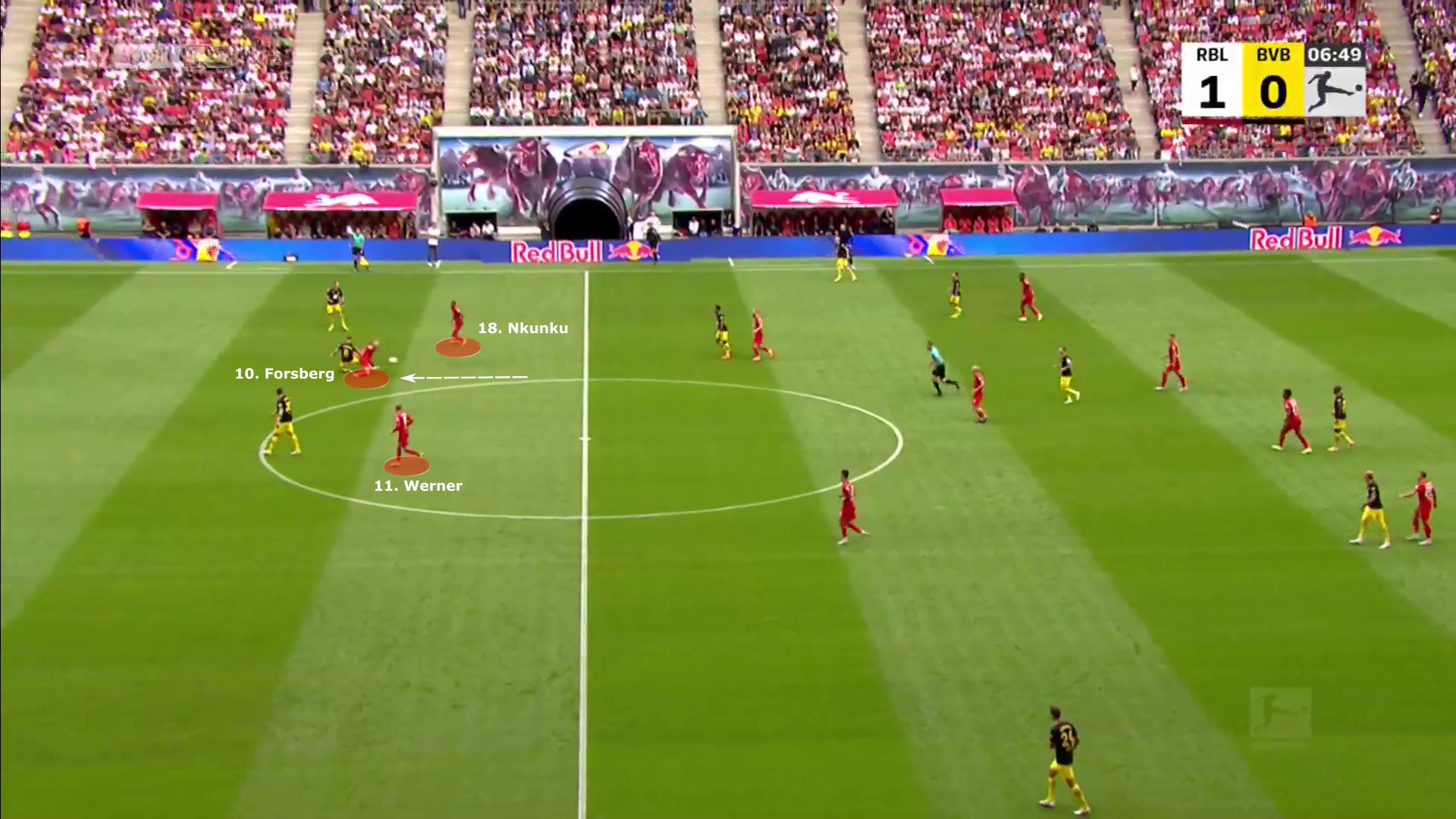 As possession is won, Werner gets on his bike as the French international floats one over the top for him to chase. 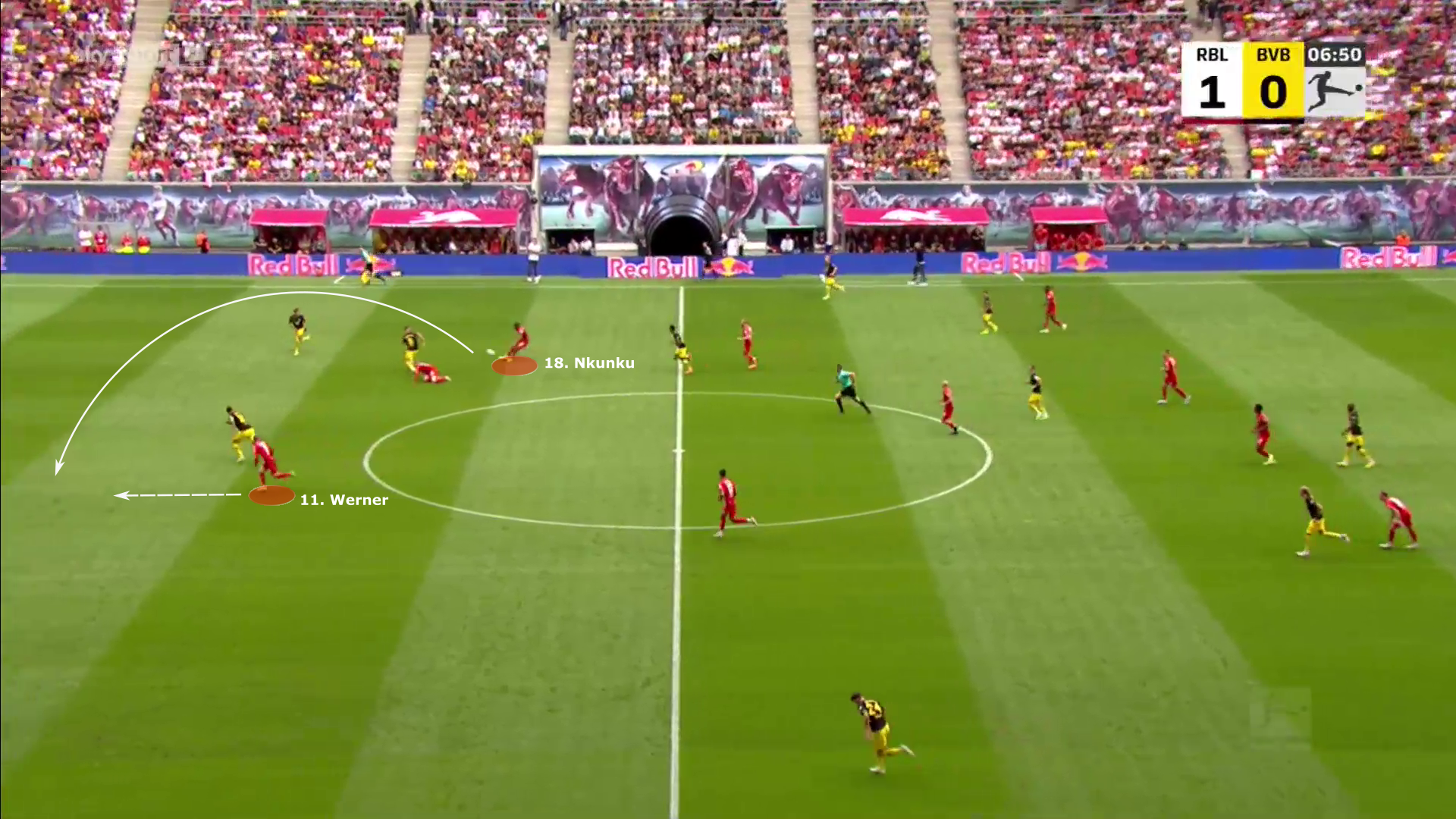 In the 32nd minute, Leipzig had another golden chance to go 2-0 up. Schlager intercepts the ball outside his penalty area and feeds it to Laimer as the home side look to break. The Bayern Munich target spots Werner’s run – just managing to keep himself onside at the halfway line – and releases a through ball to expose Dortmund’s high line once more. 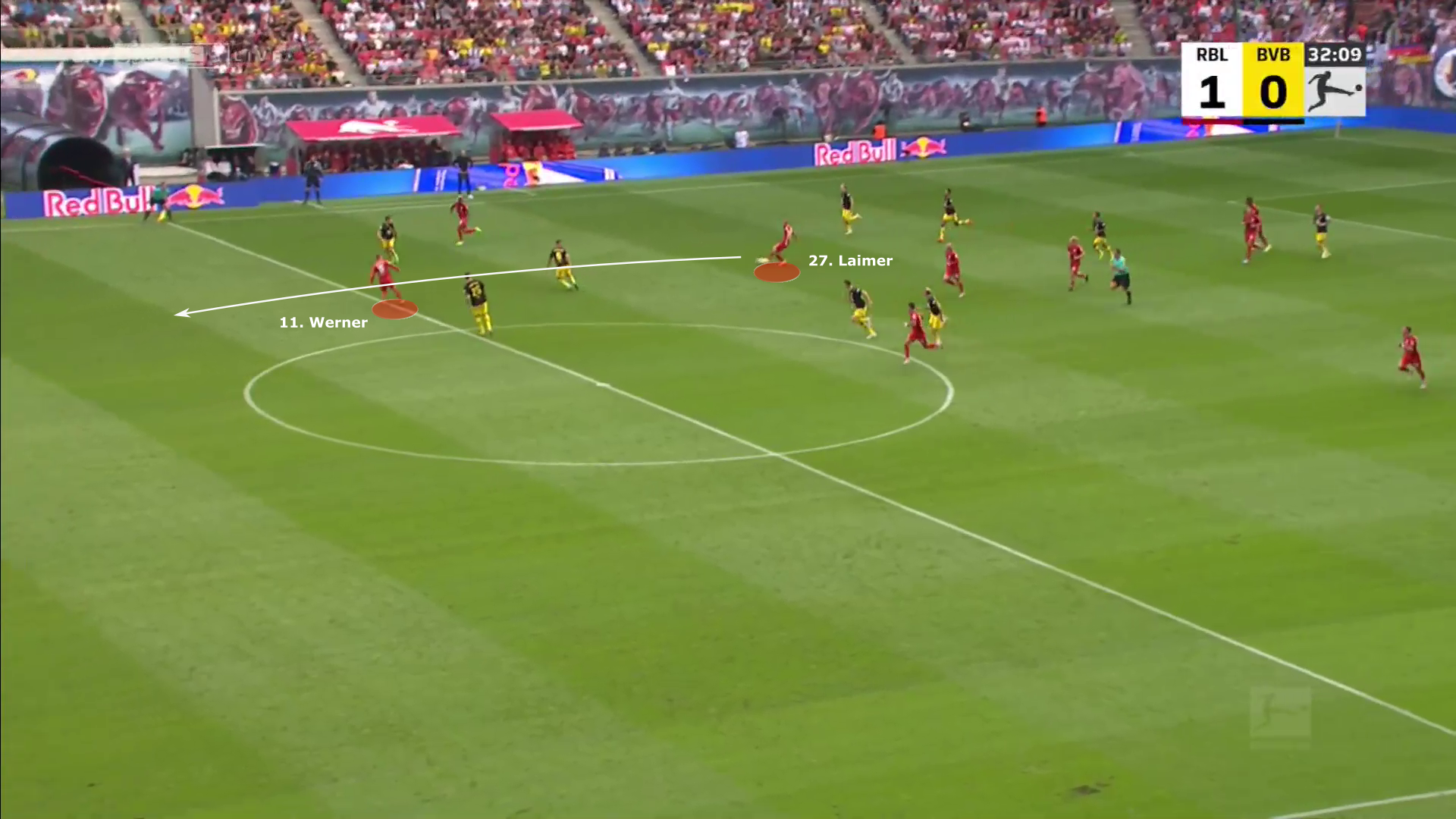 The former Chelsea man is through on goal. Szoboszlai makes his way forward in support but Werner’s lay-off is too soft, paving the way for Wolf to clear. 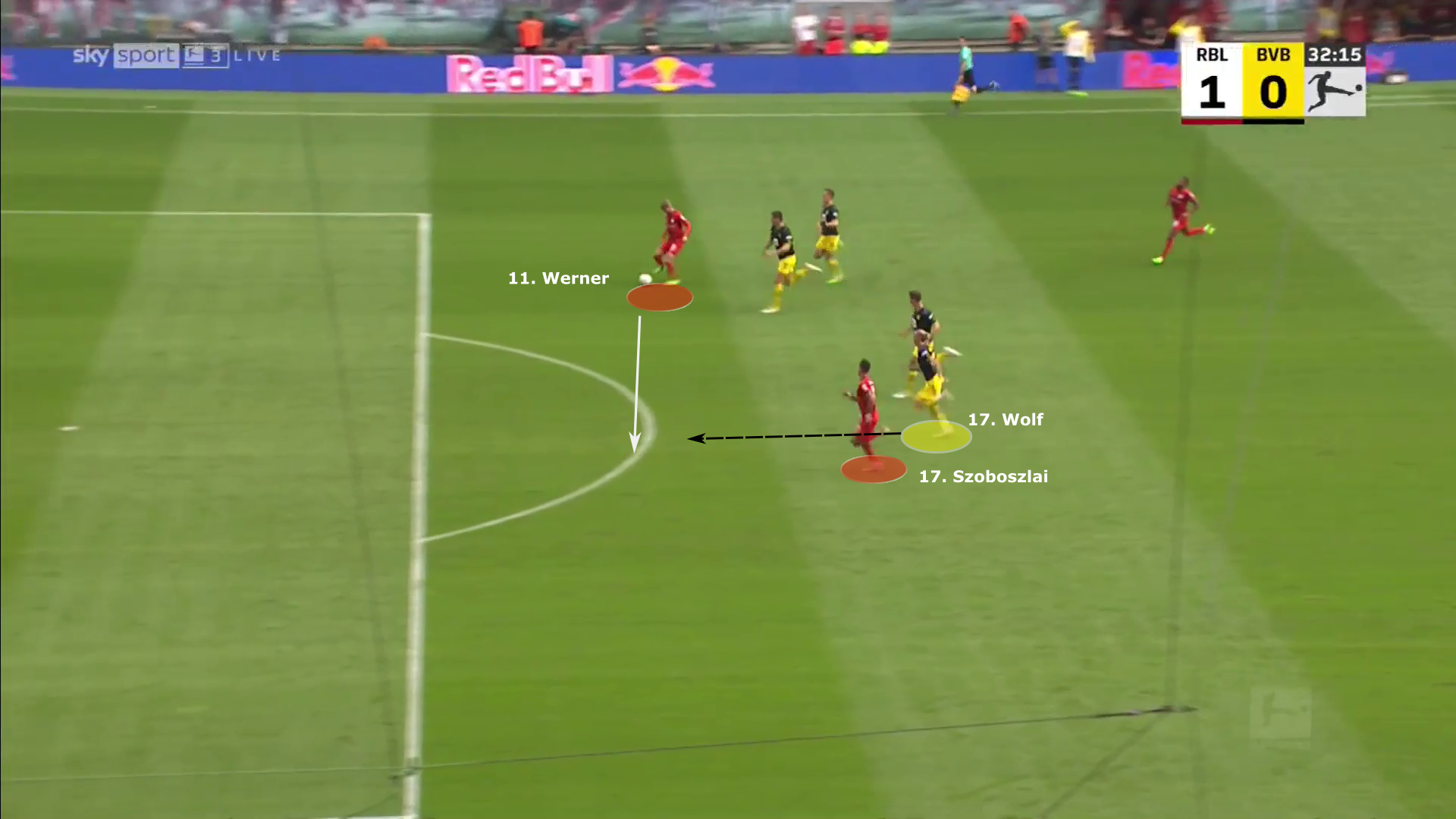 High regains paid off for Leipzig’s second and third goals. In the second half, Rose changed to a 4-4-2 after Haidara replaced Forsberg in midfield. Werner and Nkunku played as the front two. 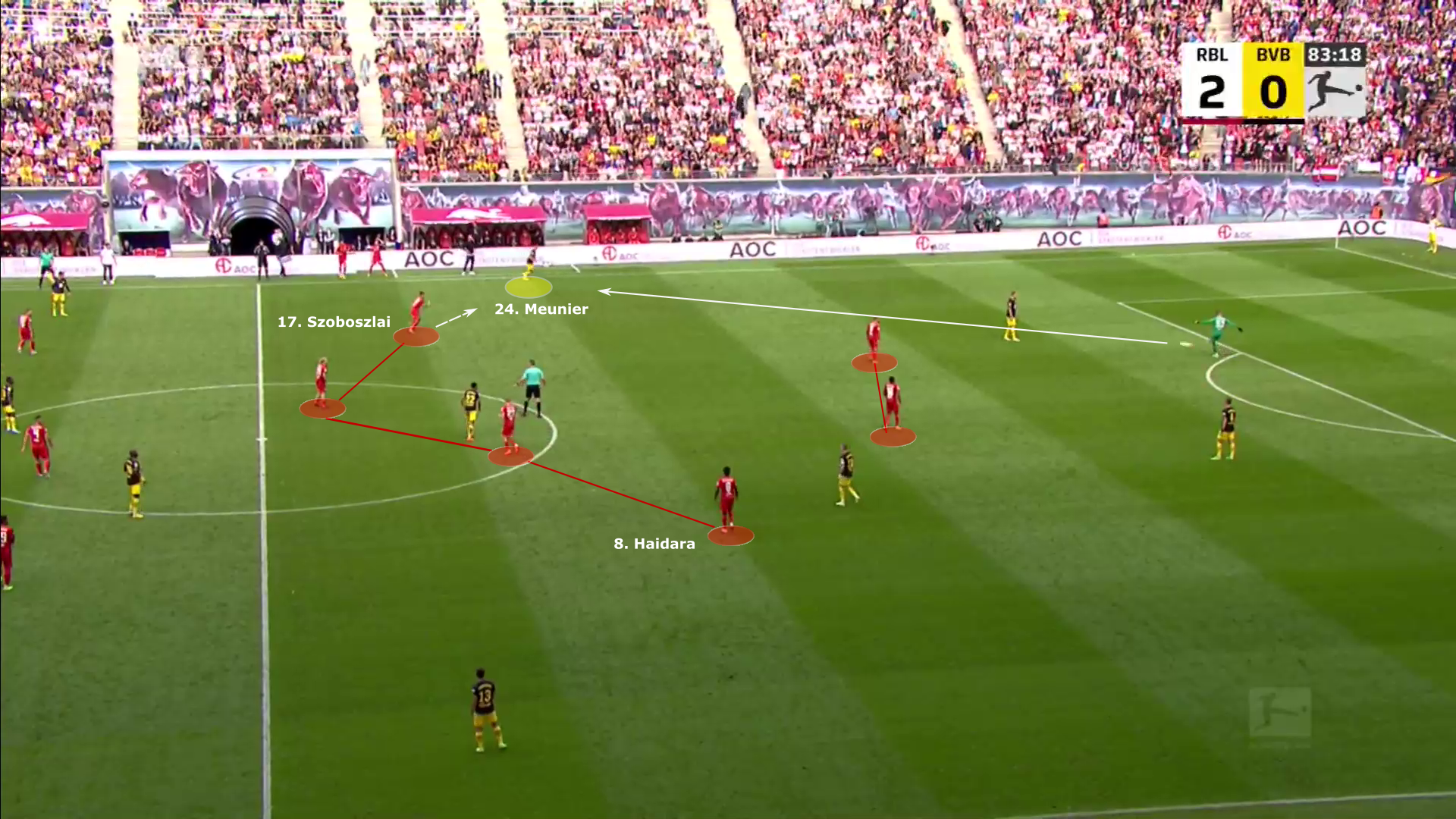 The debutant goalkeeper pings it out to Meunier on the right. Szoboszlai directly jumps towards the Belgian to cover. He wins the ball after a poor touch by Meunier and quickly drills it through to Nkunku. The 24-year-old shifts it to Werner who had already started his run towards the area. 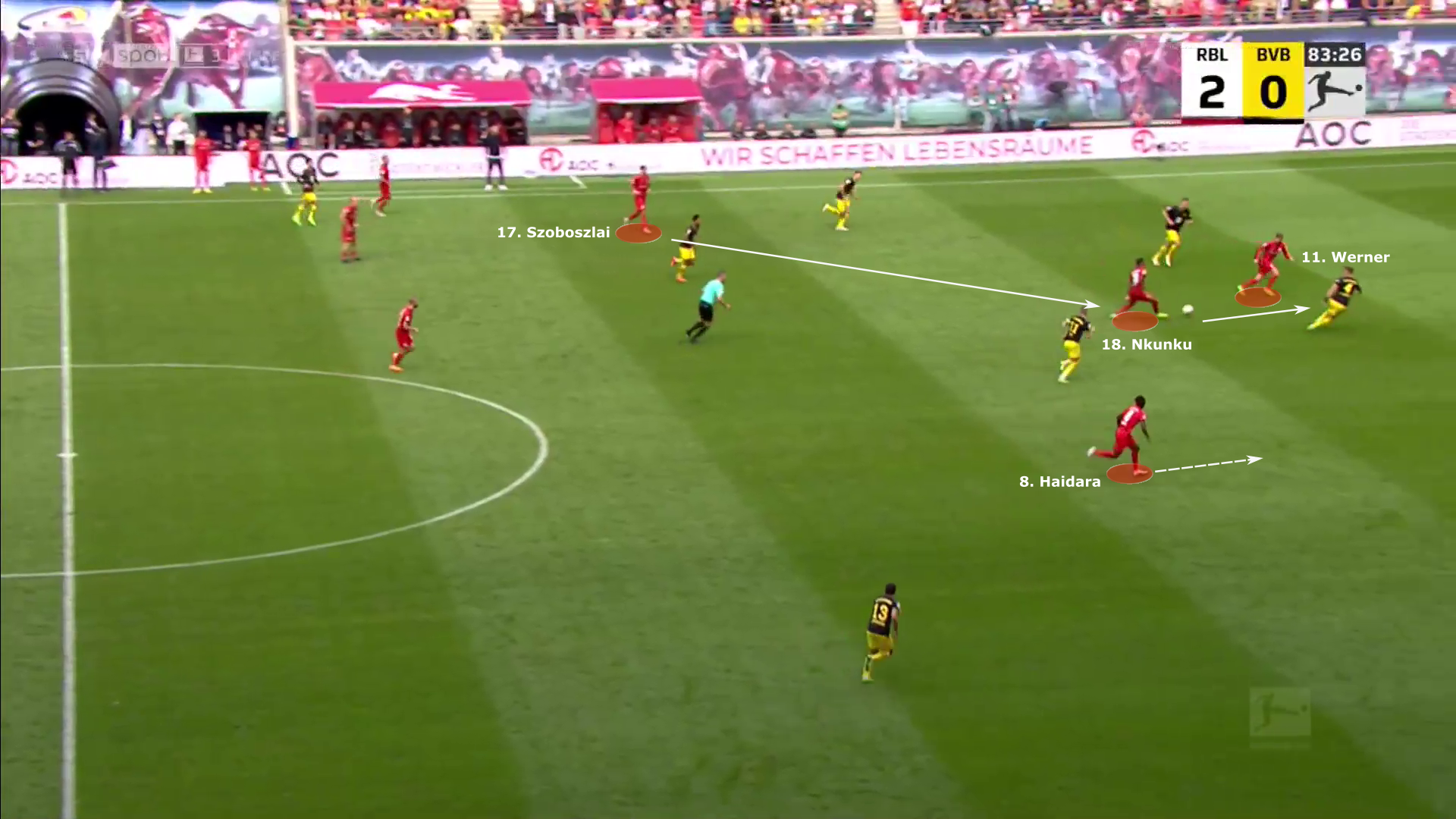 A classic Leipzig counter-pressing situation leads to a 2v1 in front of goal as Werner makes no mistake with the lay-off on this occasion to set up Haidara for a tap-in. 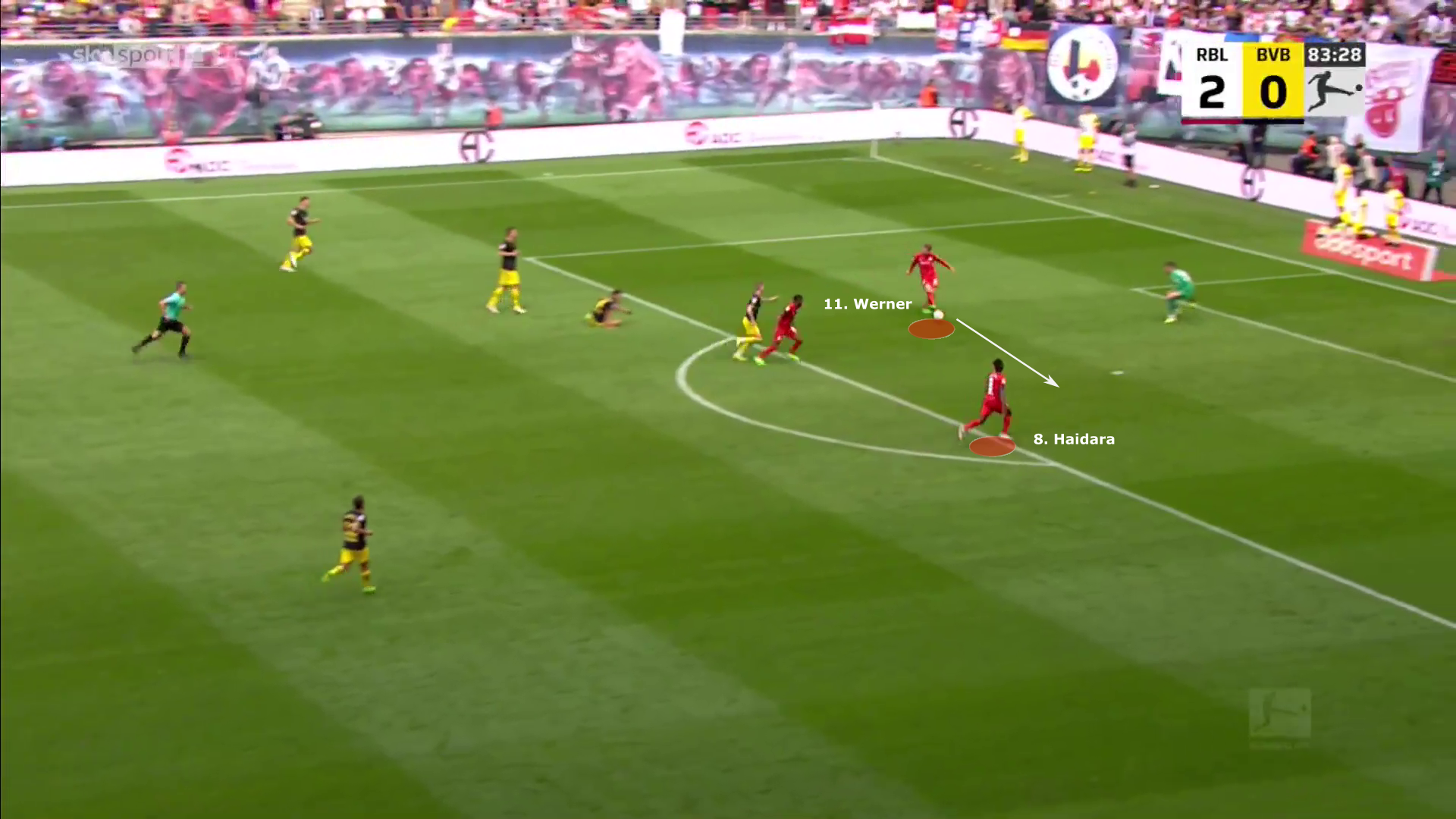 “The team know how this football works, that’s why we showed up today,” Rose said about the deeply satisfying win against his former club. “We were present, we were intense, we had an aura, we took the stadium with us.”

It was a clear switch from the tactics deployed under Tedesco, especially in terms of possession. On Saturday, Leipzig had a 45% share of the ball. The team controlled 72% of the ball in the 2-1 defeat to Union Berlin and had 58% possession in the 4-0 loss to Frankfurt.

Jude Bellingham was the standout player for a Dortmund side devoid of ideas and urgency. It was not exactly a tough task considering how underwhelming the team’s performance was, but the 19-year-old showed composure and skill – despite giving the ball away for Szoboszlai’s spectacular goal from long range.

During Dortmund’s build-up, Bellingham or Özcan would often drop back to receive in between their centre-backs. The Englishman can play it up to Süle, or find Özcan between the two defenders. 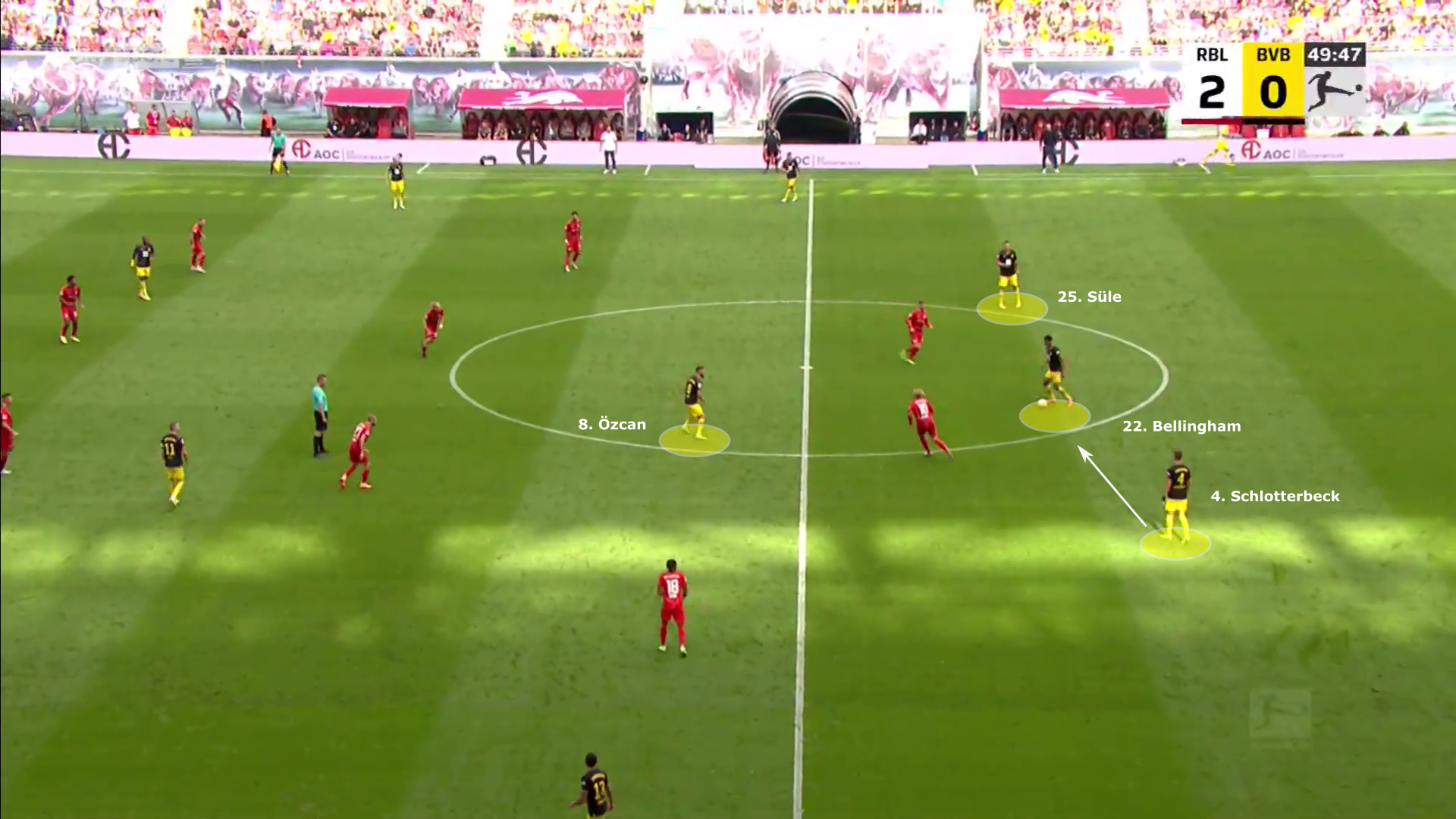 Bellingham spotted an alternative route, he dribbles towards the left before sliding a pass to Guerreiro on the flank. 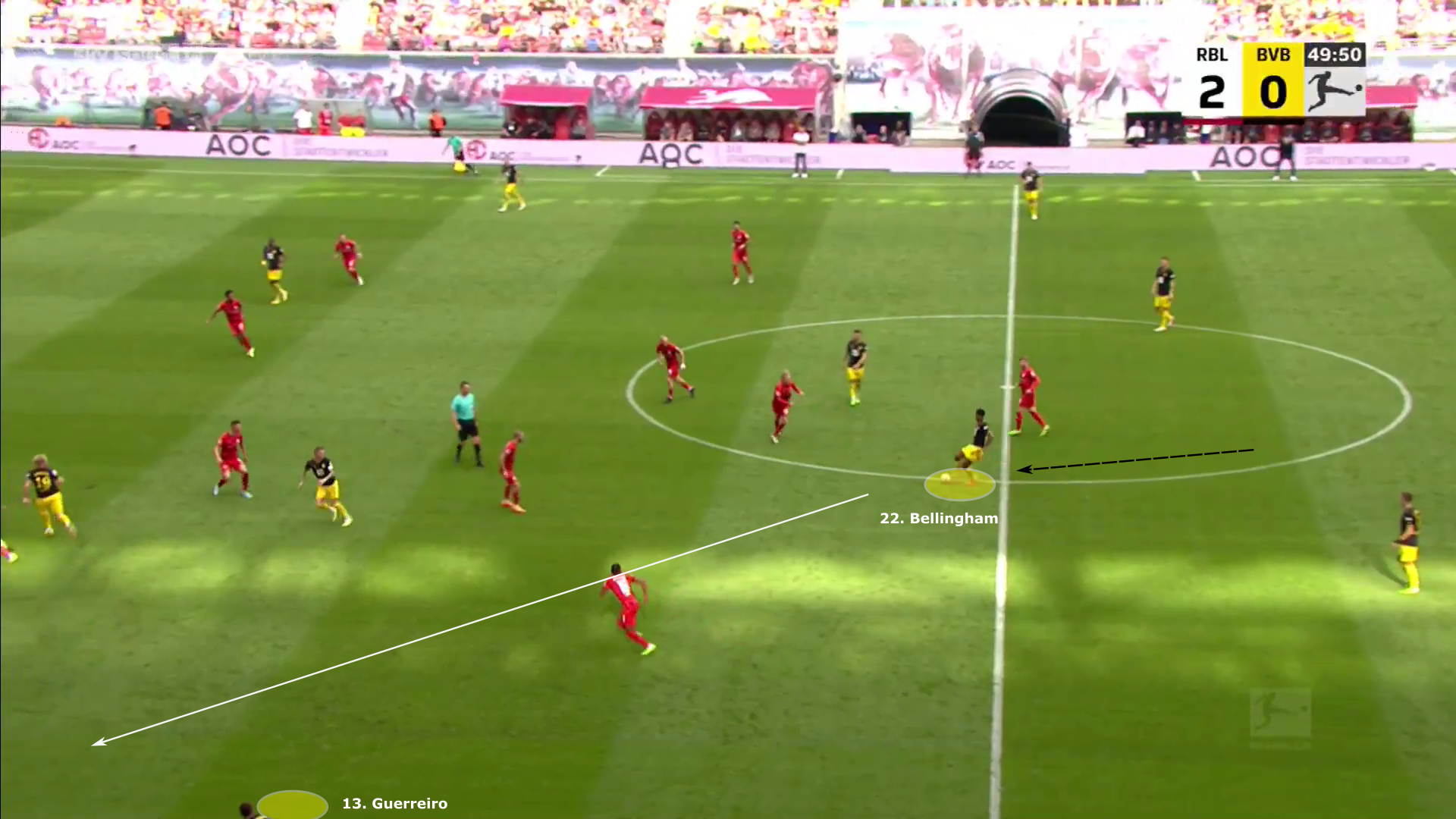 The midfielder completed 8 out of 8 dribbles attempted in the game and made 4 progressive runs. The only way Leipzig could stop his surges forward was by fouling him. Bellingham ranks second in Europe’s top 5 leagues for dribbles completed this season (19). Only Lionel Messi has completed more (30).

In this scenario, Bellingham receives from Schlotterbeck with his back to goal with little to no time to scan his surroundings. 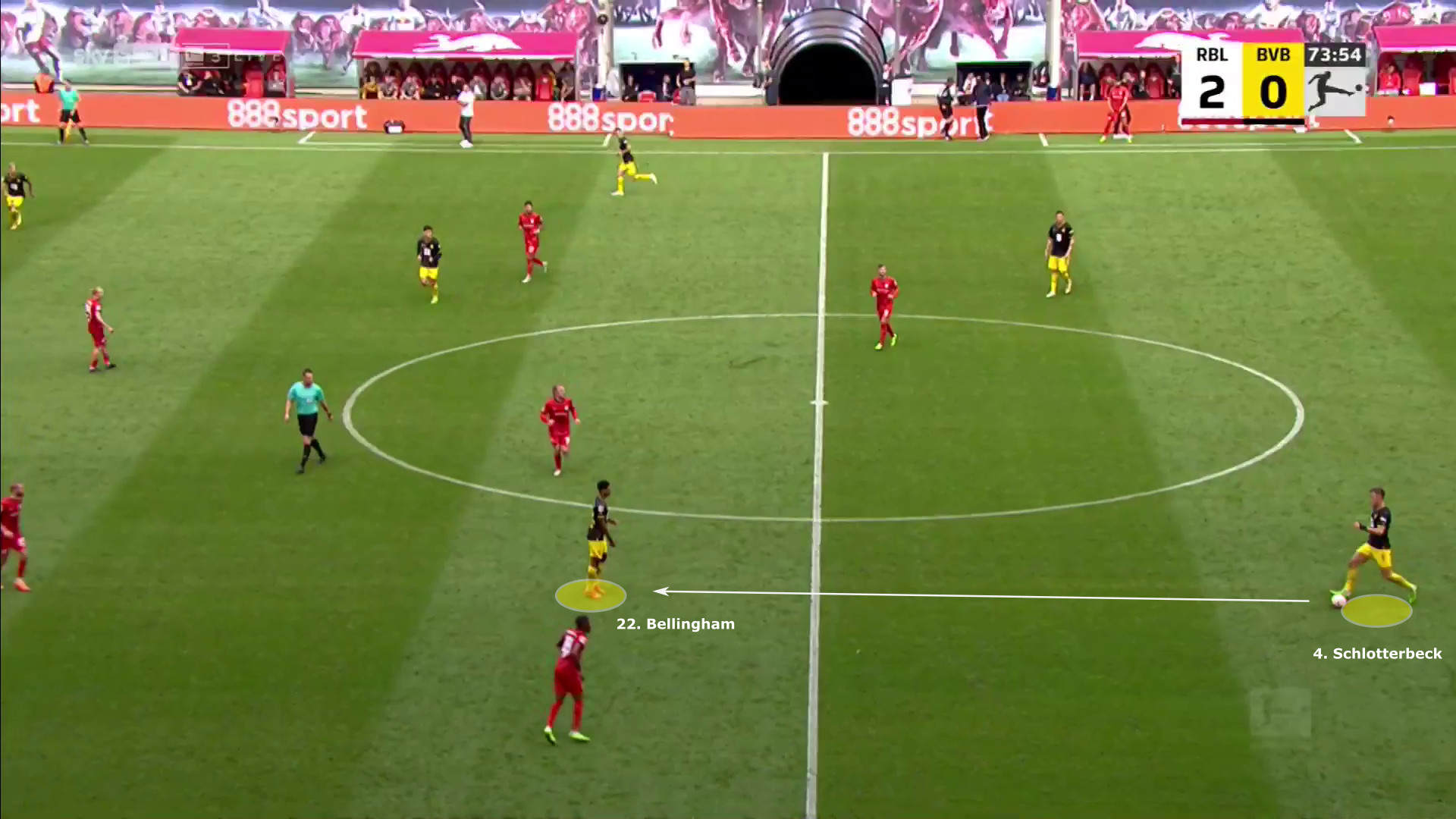 When he controls the ball, he is instantly surrounded by Forsberg, Laimer and Nkunku, but manages to keep his cool. 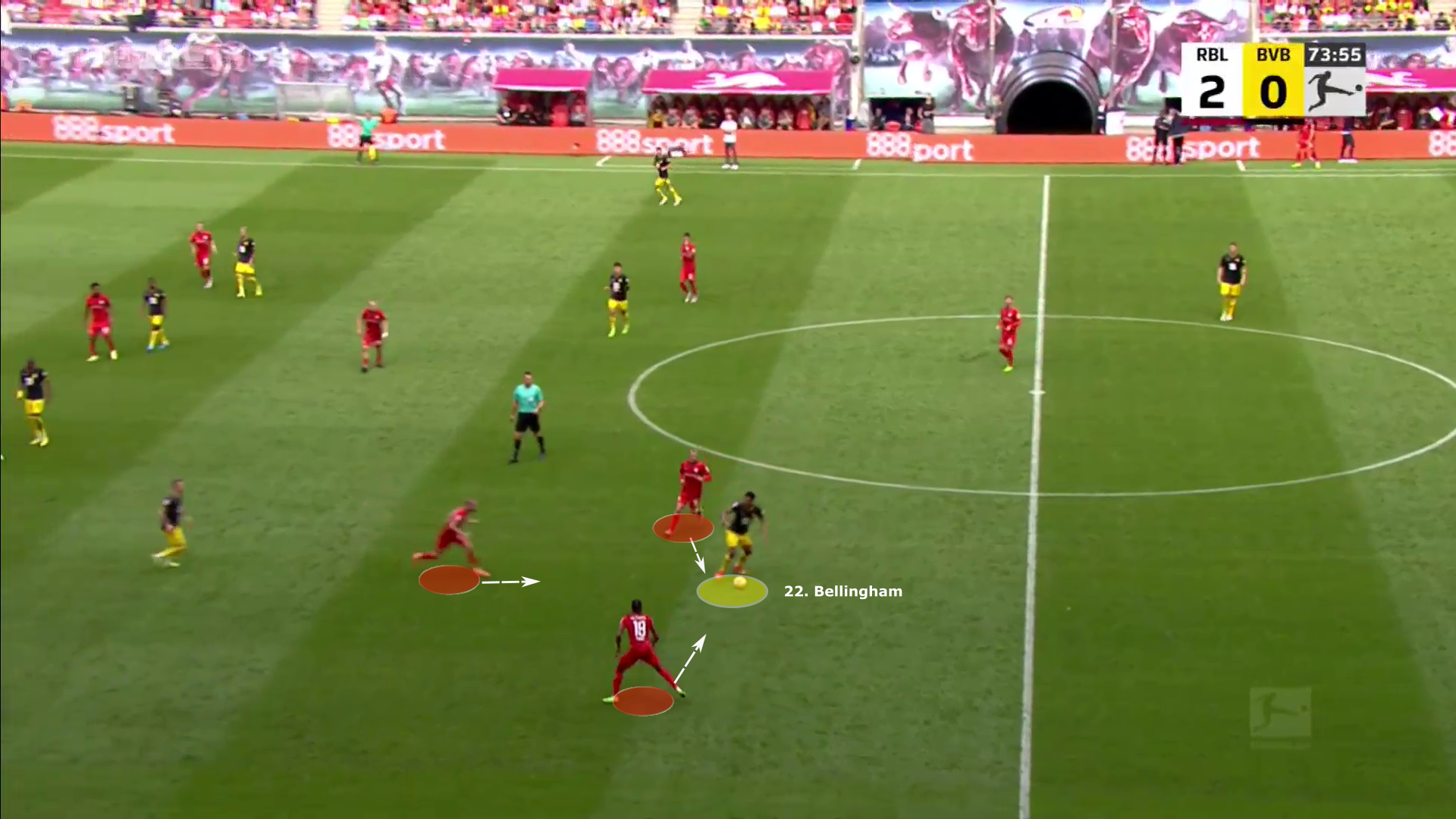 At this stage, the away side are two goals down and are desperate to move forward. Despite being under the heat, Bellingham decides not to return it to Schlotterbeck and instead turns and swivels before squeezing the ball in between the Leipzig midfielders for captain Marco Reus. 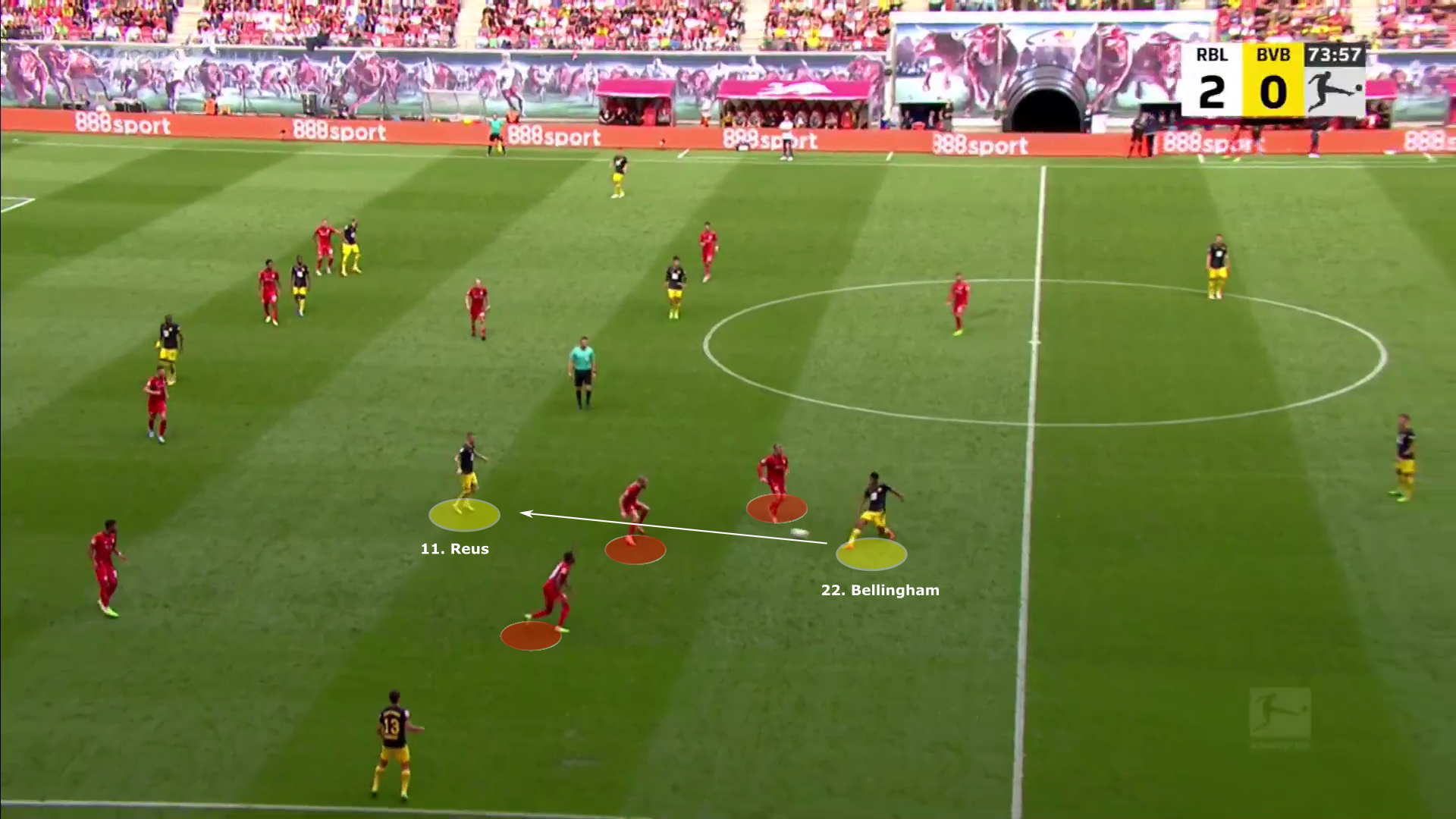 An injection of pace with Youssoufa Moukoko and Giovanni Reyna in the second half made Dortmund a slight bit more menacing. Bellingham linked well with Reyna on the left-hand side on a couple of occasions.

The Birmingham City academy graduate drifts into the left half-space to combine with Reyna and Guerreiro. 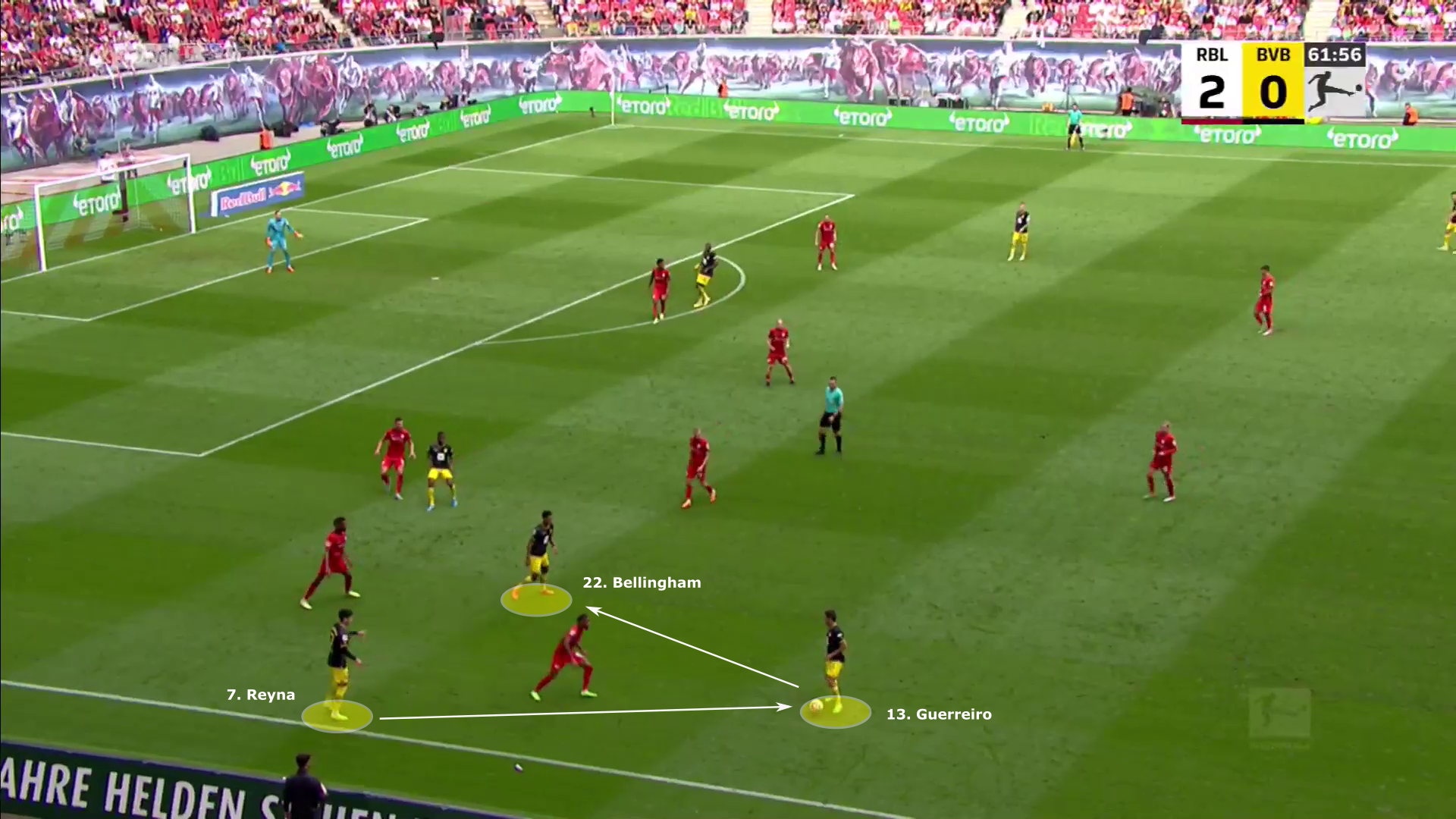 As the ball makes its way to Bellingham, he turns and slides a pass to release the USMNT youngster. 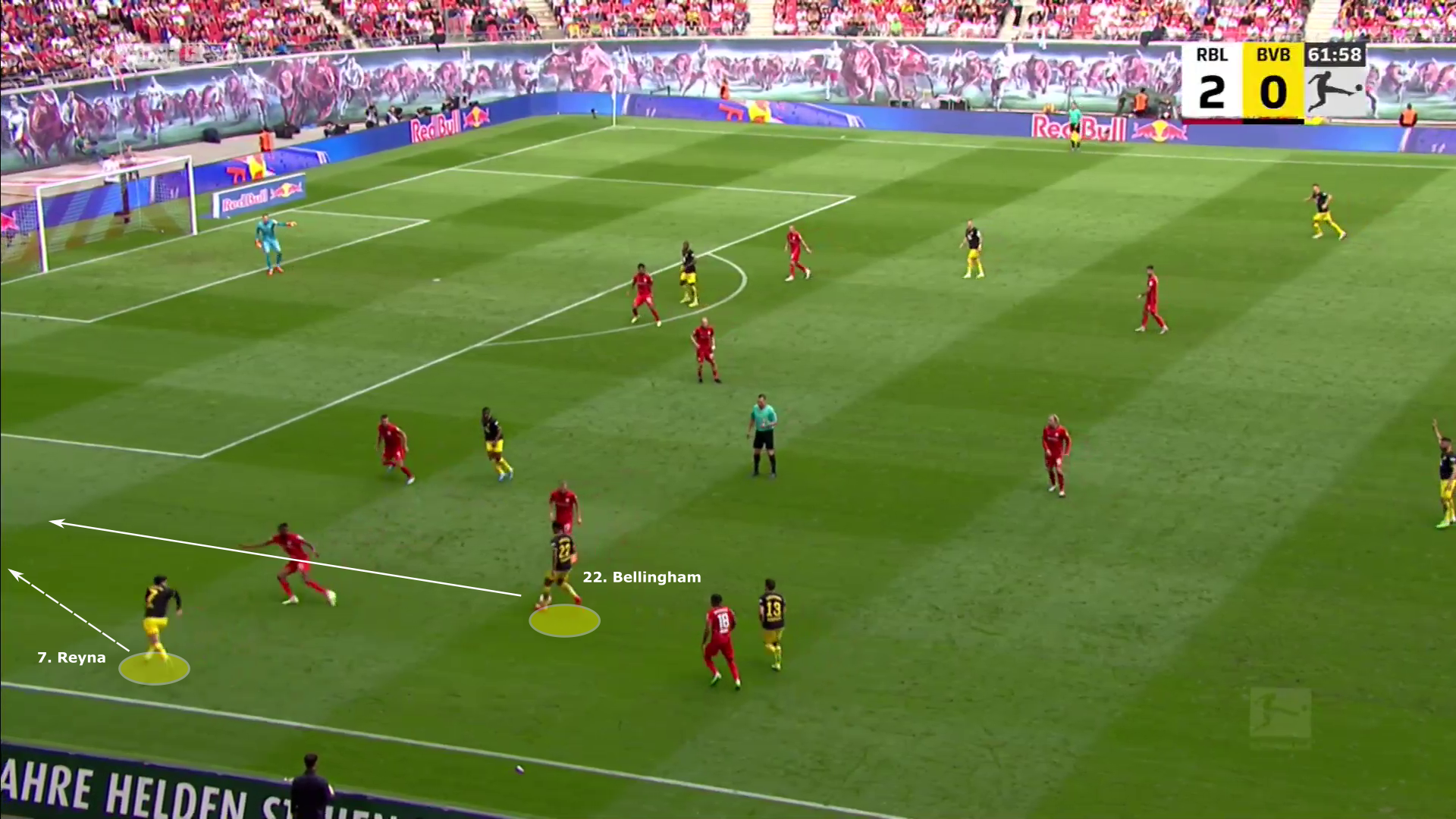 Reyna puts in a fine cross inside but Modeste can only blaze it above the bar to perfectly sum up Dortmund’s afternoon.

Bellingham also displayed his defensive qualities during the game. He made 7 interceptions while winning 19 duels over the course of the 90 minutes; 11 attacking and 8 defensive. He leads the Bundesliga in duels won so far this season with 102.

Below are Bellingham’s defensive territory and high regains maps for the 2022/23 Bundesliga season so far:

The first visual highlights the incredible amount of ground that Bellingham has been covering for the German outfit. He is surely developing into an outstanding box-to-box midfielder.

As for recoveries, 16 of Bellingham’s high regains have been from counterpressing (pink) and 4 have been dangerous recoveries (green).

As Szoboszlai put it post-match, Leipzig fizzed with “intensity, mentality and energy” to make it three wins on the bounce against Borussia Dortmund, after winning just two of the previous 11 encounters with Dortmund in all competitions. New manager bounce?

“I am now here and try to adapt my ideas,” Rose said. “The lads did it well for a first step but we can do it better.

Leipzig were electric in transitional situations and when playing balls in behind for the likes of Werner. Against teams who tend to sit back, however, Leipzig will naturally be forced to play a more possession-based game. We should get a better and clearer idea of how they intend to play with the ball then.

The games come thick and fast for Marco Rose. The hosts travel to European Champions Real Madrid in the Champions League during the week before facing another one of Rose’s former teams in Borussia Mönchengladbach at the weekend.

There was far too little from the visitors as Dortmund, who face Manchester City in the Champions League next week, failed to muster a single shot on target throughout. They will need to sort themselves out if they want to give themselves a chance against a rampant City side, led by their former striker and goal-machine Erling Haaland.