This week was the start of the group stage in this season’s UEFA Europa League and Lazio got off the flyer with an empathic 4-2 victory against Feyenoord at the Stadio Olimpico.

Maurizio Sarri’s side came into the game after suffering their first defeat of the season to Napoli last weekend. They were unbeaten before that. However, they have only kept one clean sheet and they currently sit in ninth place after five games played in Serie A.

Feyenoord has been playing with confidence, having won three consecutive games. They came into the match knowing any type of result would be beneficial for them to qualify as this fixture is likely to provide them with their hardest test in a group including Sturm Graz and Midtjylland.

This tactical analysis will focus on the key principles of Maurizio Sarri’s tactics in this match and how they were fundamental to Lazio’s victory.

Danilo Cataldi started the game instead in place of Sergej Milinković-Savić. This was due to Cataldi being suspended for Lazio’s next Serie A match. It provides Sarri with the chance to rest Milinković-Savić. Elseid Hysaj returned to the starting line-up game against Feyenoord.

For Feyenoord, both full-backs Marcos Lopez and Lutsharel Geertruida missed this match. Slot continued with Danilo and Patrik Walemark as both players looked to have struck a good partnership, following two goals for Danilo, both provided by Walermark. 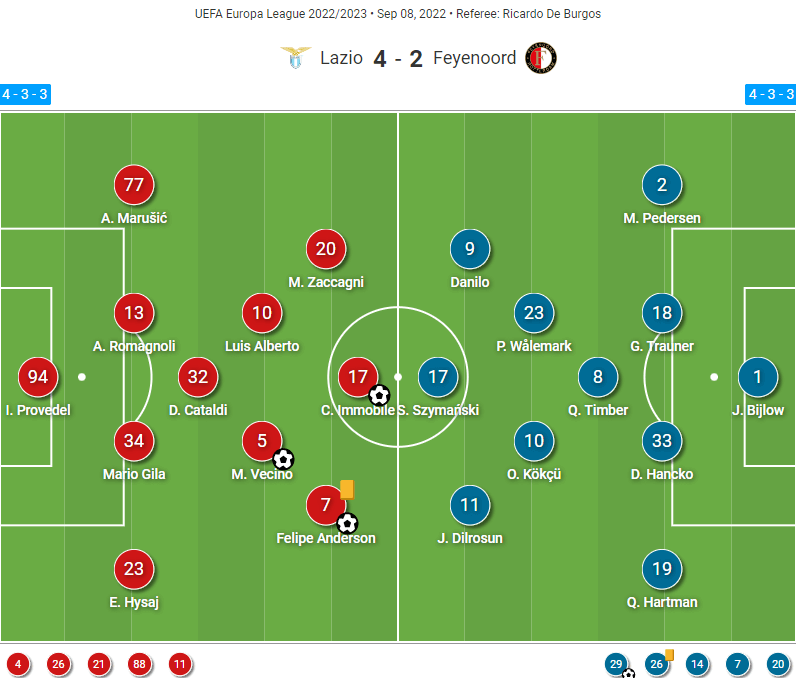 Maurizio Sarri and Arne Slot both used their traditional 4-3-3 as their base formation.

In possession, Lazio transitioned into different attacking shapes as their positional play approach was dominant throughout. They switched between a 2-3-5 and a 2-3-2-3 at various points.

Out of possession, they switched between sitting a 4-4-2 and 4-3-3 when defending high up the pitch as they looked to stop Feyenoord from progressing the ball any further than the middle third of the pitch. They were not just intent on protecting the pitch centrally and forcing out wide, as soon as Feyenoord played out wide Lazio pressed urgently to force the play inside.

Similarly, Feyenoord’s defensive shape was a 4-4-2. In possession, they wanted to attack in a 2-3-5 but they struggled to get any control of the ball to implement any type of decisive transition when attacking. In the second half, Slot switched the formation to a 4-2-3-1 for more defensive protection. It also allowed the Feyenoord to support their attack better from out wide as the fullbacks had more licence to get forward.

A notable part of Maurizio Sari’s philosophy is how vertically progressive they are in possession. This was especially evident during this tie. Feyenoord was unable to cope with how quickly Lazio played through their defensive shape with good movement and vertical passing.

Vertical passing is a tool that Sarri has used at every club he has managed, it allows for the instant progression of the ball into more advanced areas of the pitch, and it can break up to two lines of pressure from the opposition.

On Thursday, Lazio used vertical progression from the first phase of the build-up. This tactic is a clever way of attracting the opposition towards the ball and further away from their own goal, creating space behind the midfield and the defence.

The example below shows this. Lazio is building up from defence, and Mario Gila is holding possession. From this stage, Matias Vecino drops to receive the ball. Gila immediately progresses the play into him Vecino who plays a first-time pass to the right full-back Elseid Hysaj. Hysaj then plays a quick vertical pass down the line to Felipe Anderson. 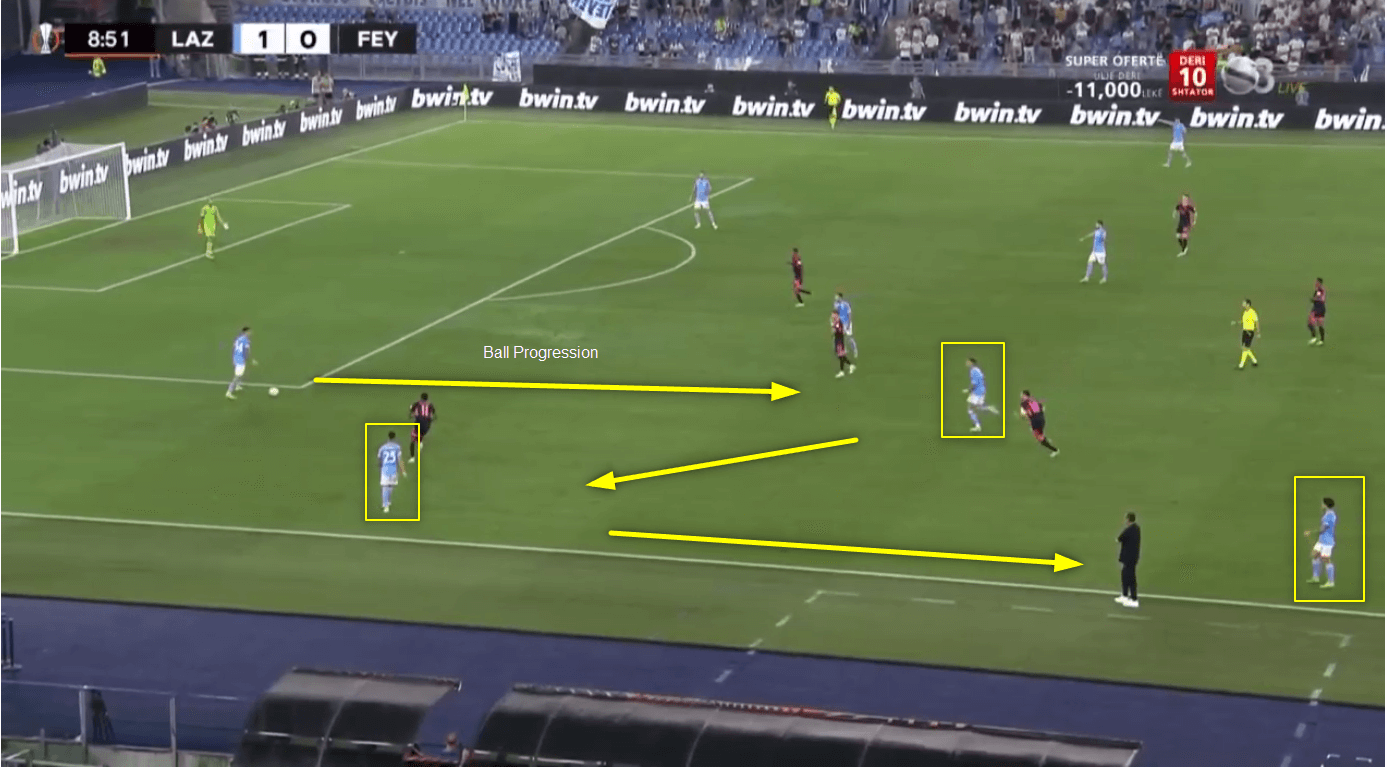 This passage of play shows Lazio playing two quick vertical passes. Not only does each pass cut out two lines of pressure from Feyenoord but also allows Lazio to get in behind Feyenoord’s midfield as the images show the three midfielders being pulled in to compress the space between them and the forward line.

It was not just building from the first stage to the second stage that the BiancocelestiIt’s verticality was troubling Feyenoord with. It was right through to the final third.

The same players participate in the next feature. From the first pass into Vecino, Lazio plays quick vertical passes from Vecino to Hysaj to Danilo Cataldi who then plays the ball in behind for Ciro Immobile who almost scored from the chance. 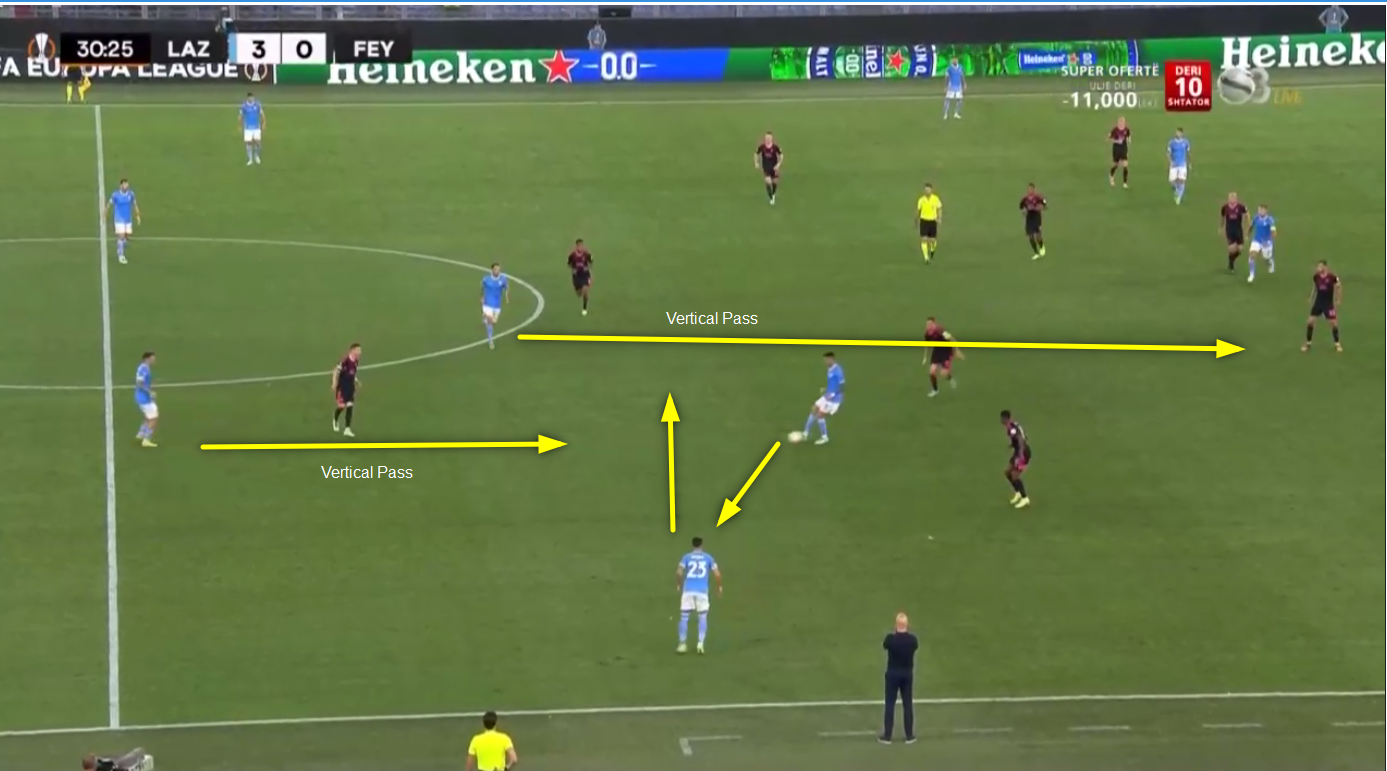 Lazio kept creating space and gaps in Feyenoord’s defensive shape by following each horizontal pass or backwards pass with a forward pass.

Lazio completed 241 forward passes during this game with an 85.06 success rate. They made 70 passes into the final third with 88.57% of them being successful and completed 97 progressive passes, achieving a 77.32% success rate. For the entirety of the first half, they were able to penetrate Feyenoord’s defence with quick passing and off-the-ball movement.

Lazio’s vertical passing game would not have been as effective in this match without the support of their off-the-ball movement, and third-man runs. Vertical and progressive passing is a simple tactic, but in order for it to be implemented correctly, it is the third man run that makes it work. It enables a team to create overloads and creates space to attack.

The movement from Lazio’s third man is what was able to break Feyenoord’s press and defensive shape, which allowed them to attack so well throughout the game.

Look at the run Elseid Hysaj makes as Vecino plays his pass to Felipe Anderson. Not only does his run take him in between the lines, it gives Feyenoord centre-back David Hancko a big problem as he will never have another option but to close down Hysaj once he receives the pass from Anderson. This will then create a big gap in Feyenoord’s defence for Ciro Immobile to exploit. 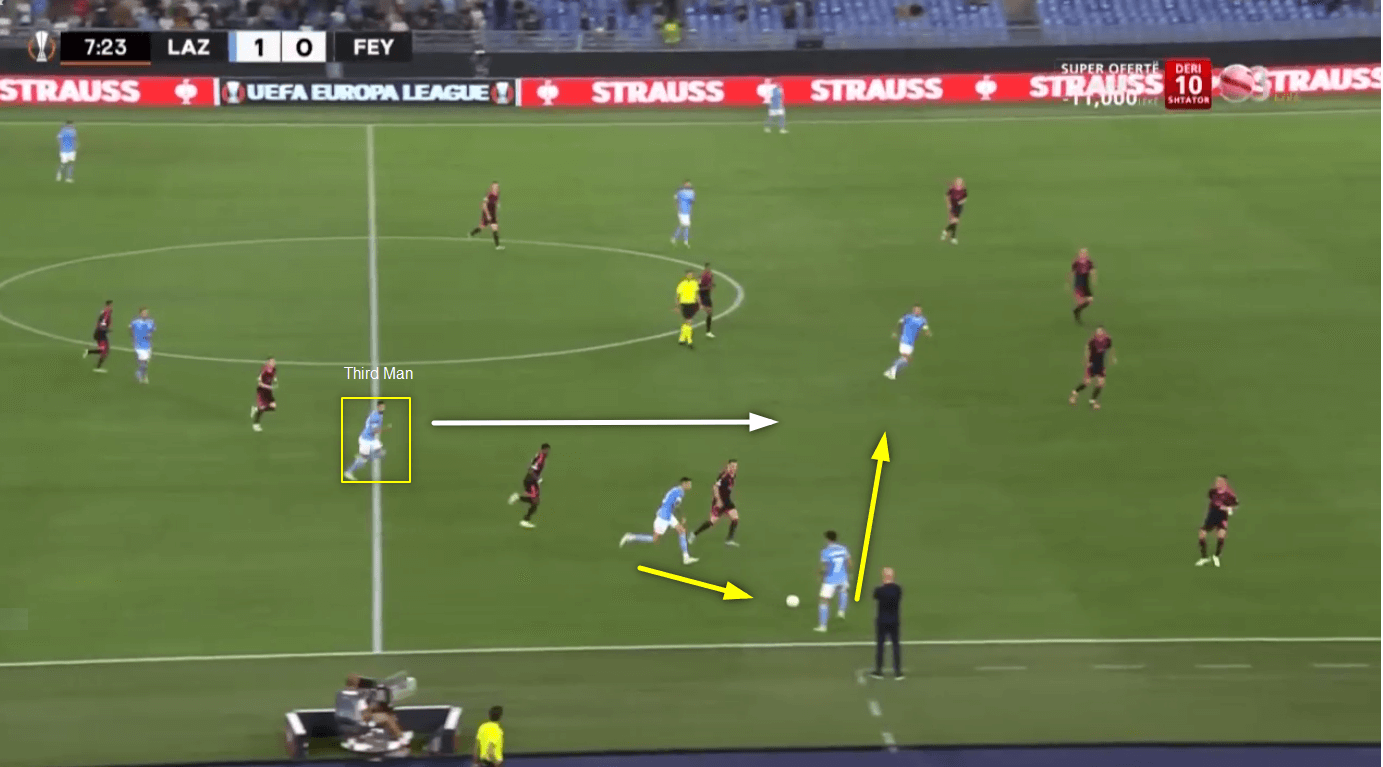 The sequence of play below shows Immobile dropping deep to receive a pass that does not get played by Adam Marušić. Instead, Montenegrin progresses the ball to Zaccagni. At this point, Immobile changes his run so he can receive a pass from Luis Alberto because that’s where Zaccagni plays the ball forward. Once he passes to Immobile, Lazio can attack the space created through his movement. 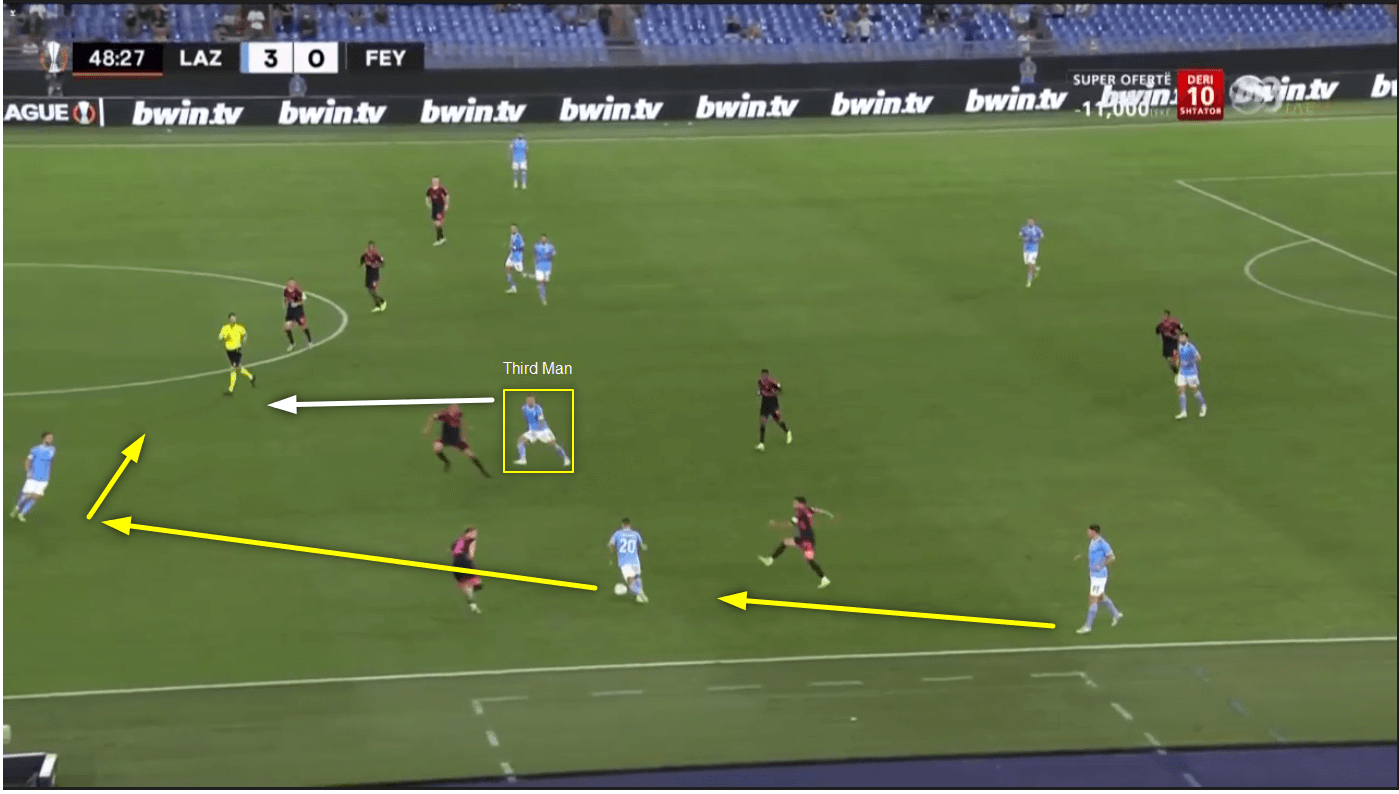 You can see in both images how many Feyenoord players have been drawn toward the play and why the third-man run is crucial for Lazio in each scenario. It enables them to take advantage of Feyenoord players vacating their shape and space to stop Lazio’s forward progression. If that run is not made, then Lazio is not able to play with verticality and it would make Feyenoord’s defensive transition a lot easier.

Lazio’s three-man midfield consisted of Danilo Cataldi playing in between Luis Alberto and Matias Vecino. Cataldi would remain central and protect the defence whilst Alberto and Vecino would support the defence and the attack from either side of him, operating traditionally as number 8’s. However, under Sarri, these positions have been allowed to roam around the pitch and play free roles. They are still required to work to fulfil the duties that a typical number 8 provides but positionally Sarri has given whoever plays the freedom to move.

The reason for this was evident in the game. Luis Alberto and Matias Vecino were pivotal to Lazio’s vertical passing game because they were able to move around, they were able to pick up the ball and find pockets of space created by the off-the-ball movements of other players.

These two images show both Alberto and Vecino pulling from their areas to assist during the first phase of build-up play. The positions they assume increase the opportunity for the player in possession to be progressive and allow the team to create overloads in wide areas to build through. 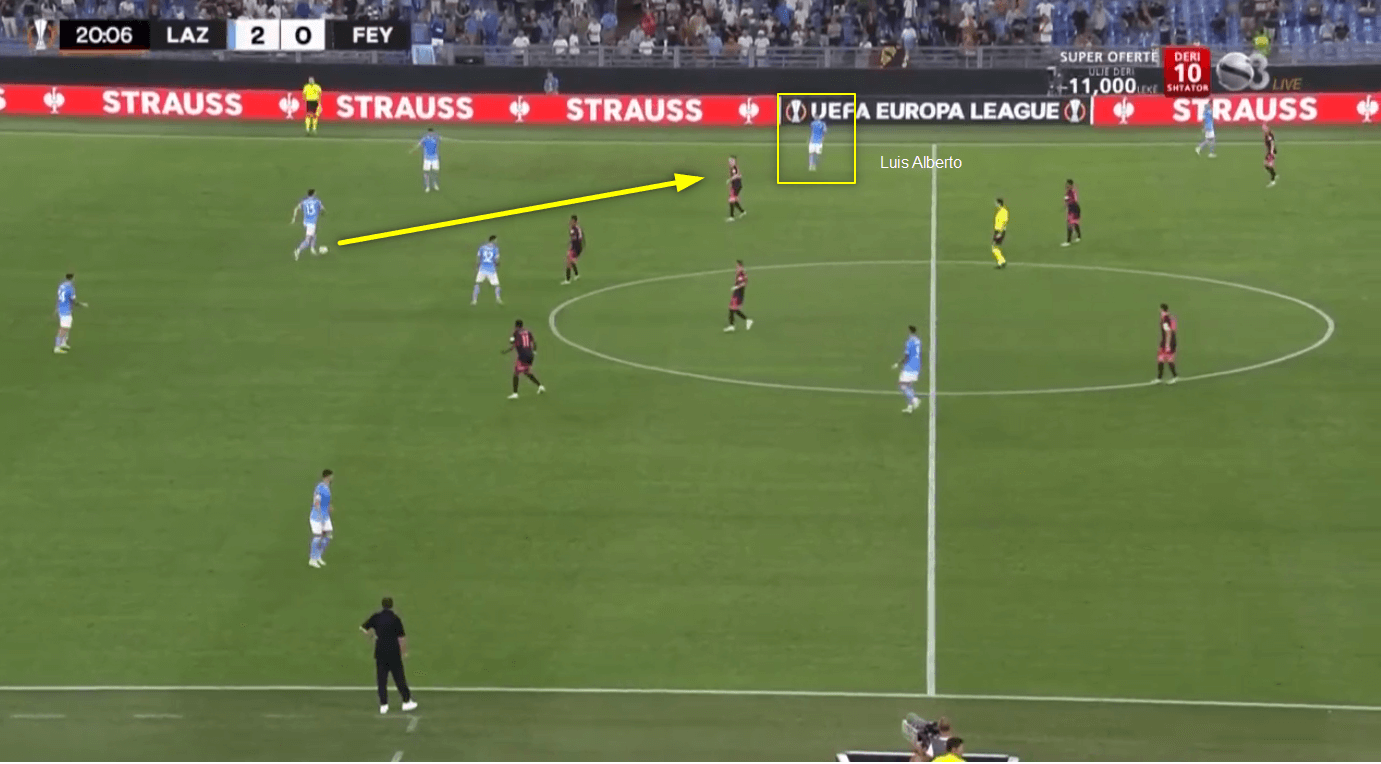 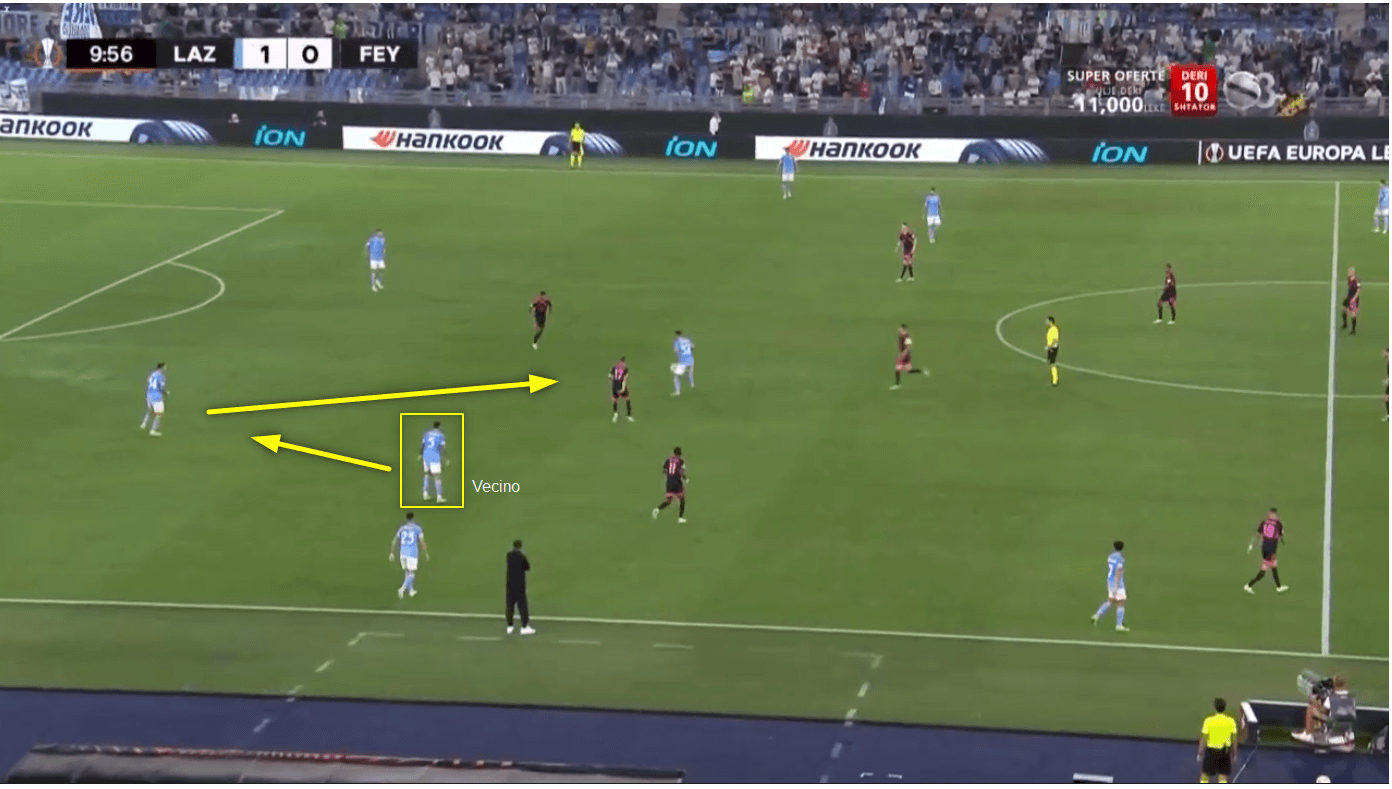 Their movement across the pitch was vital in several ways. It helped move and stretch Feyenoord from any kind of defensive shape they held which is an important aspect of positional play. Their roaming allowed Lazio to be unpredictable with what attacking shape they would attack in as they switch between different offensive formations, and it was essential to be able to be progressive in possession.

Maurizio Sarri’s tactical approach is focused on controlling the game through possession. He does not like house teams to play long ball football. Even if the vertical option is available and they are playing laterally across the pitch, he likes to build across the pitch with quick passes. In this game, his two free numbers eight are the link for this. They are required to go and support the ball all over the pitch.

You can see how Vecino moved out wide to occupy the right-hand channel. This has been a notable trait within Sarri’s tactics this season in Serie A matches. He does not want the fullbacks to play high and wide and provide the width, he wants to play where they are in the image below. 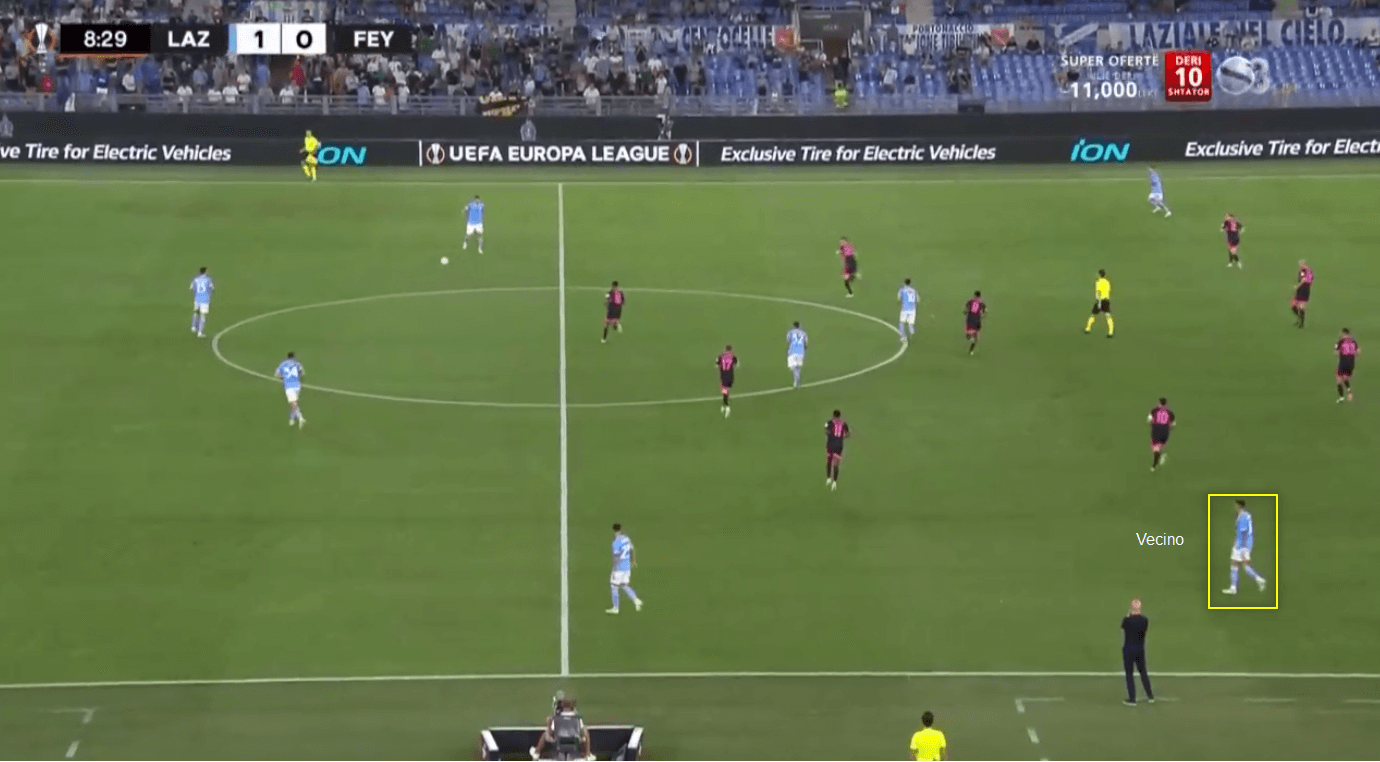 Sarri wants them to be available and to provide width during the build-up stage, with the wingers remaining wide and Vecino and Alberto joining the attacking line at different areas to disrupt Feyenoord’s defence. 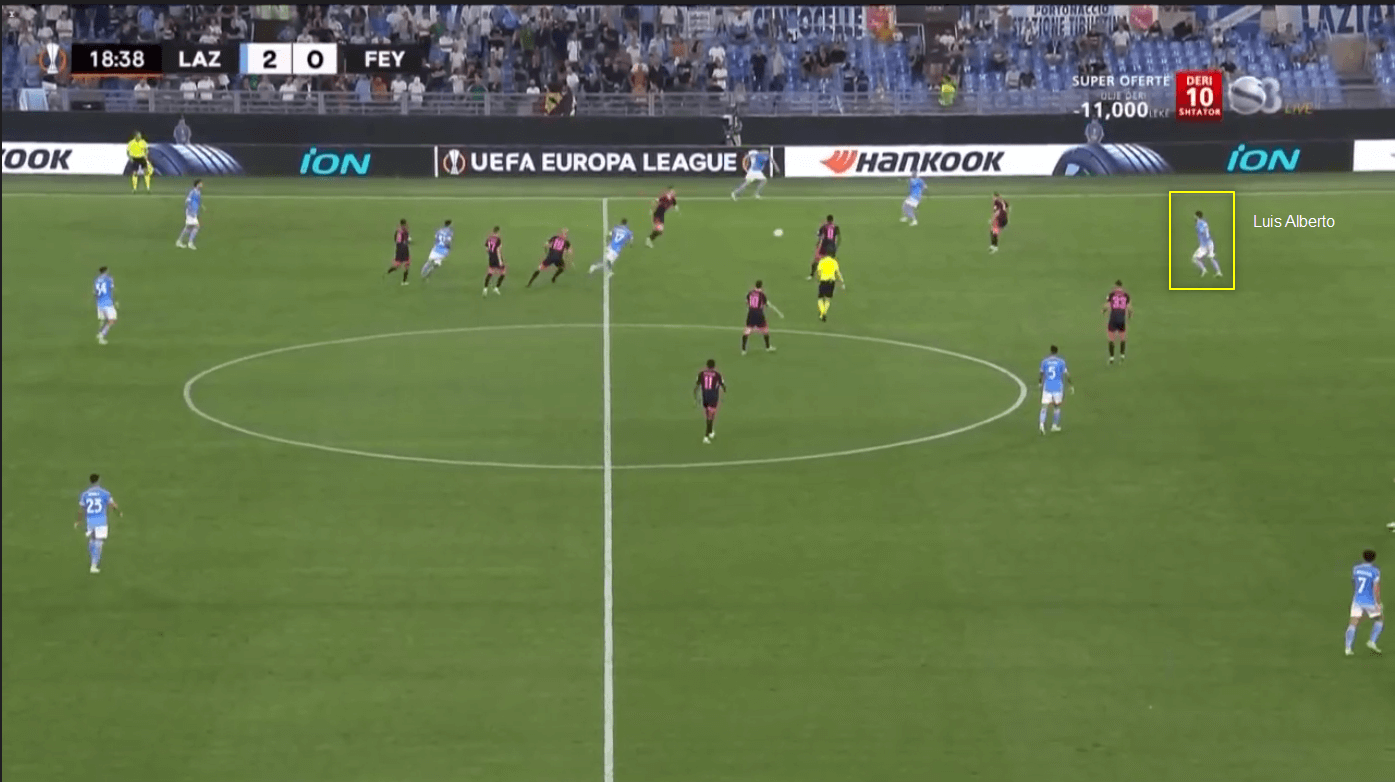 Roaming midfielders has been a constant this season for Sarri and Lazio. We have explained in this analysis their importance for vertical ball progression and how being allowed to roam enables them to take advantage of different spaces created with third-man runs.

During this game, it was Luis Alberto and Matias Vecino who scored two goals as a result. In other games, Sergej Milinković-Savić plays in one of the midfield roles that Sarri employs to roam. Below are the heat maps from all three midfielders, showing all the player’s actions on the pitch and the areas they complete them. These heat maps show the full extent of how the former Juventus and Chelsea manager wants his two midfielders to play and affect play all over the pitch.

Luis Alberto operates through the centre of the pitch and on the left-hand side, but you can see how he picks up the ball and effects play in all thirds of the pitch. 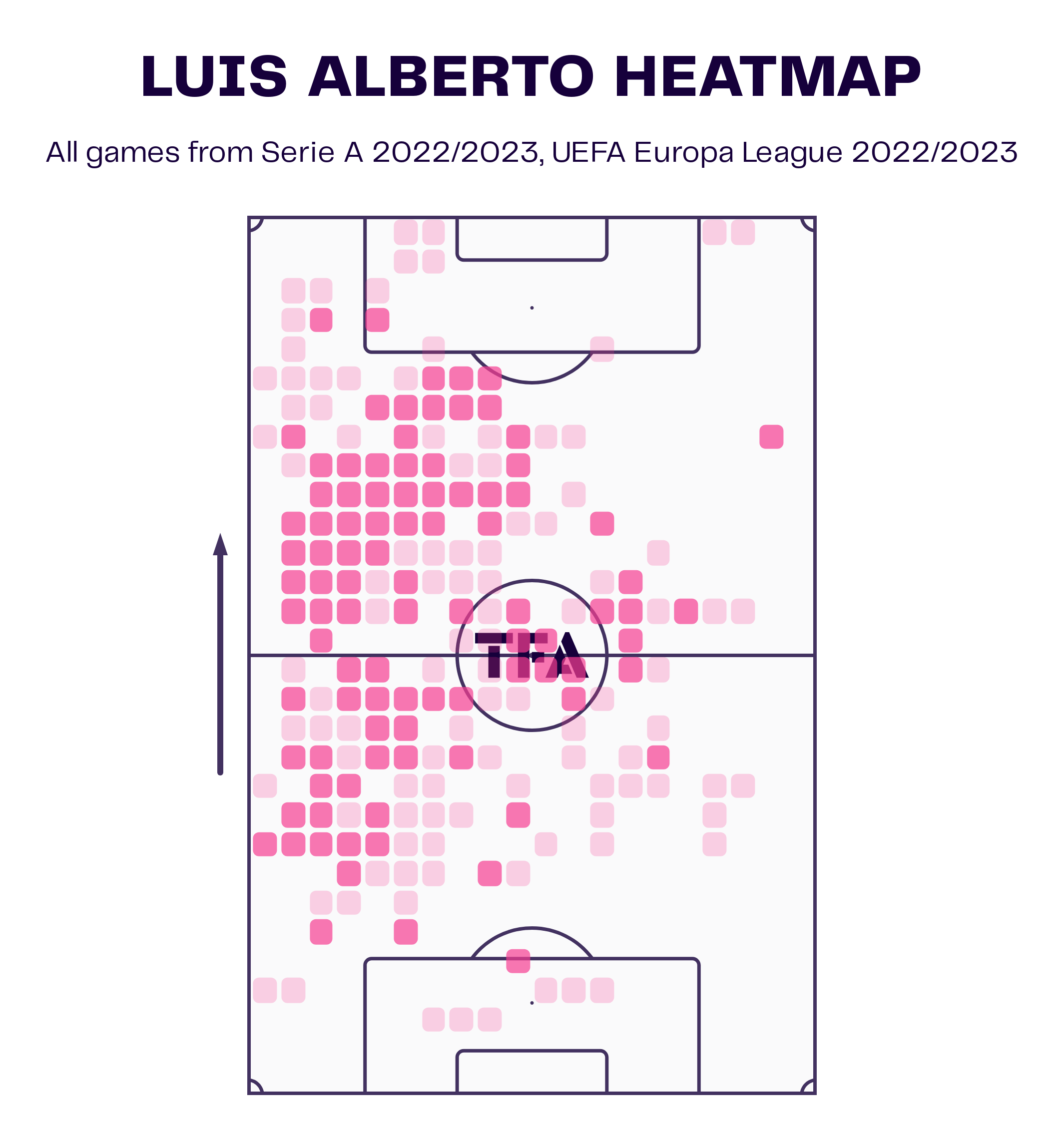 Vecino covers the whole pitch and although he is a first-team regular, his ability to be effective play all over the pitch will be important if Lazio progresses deep in this competition. 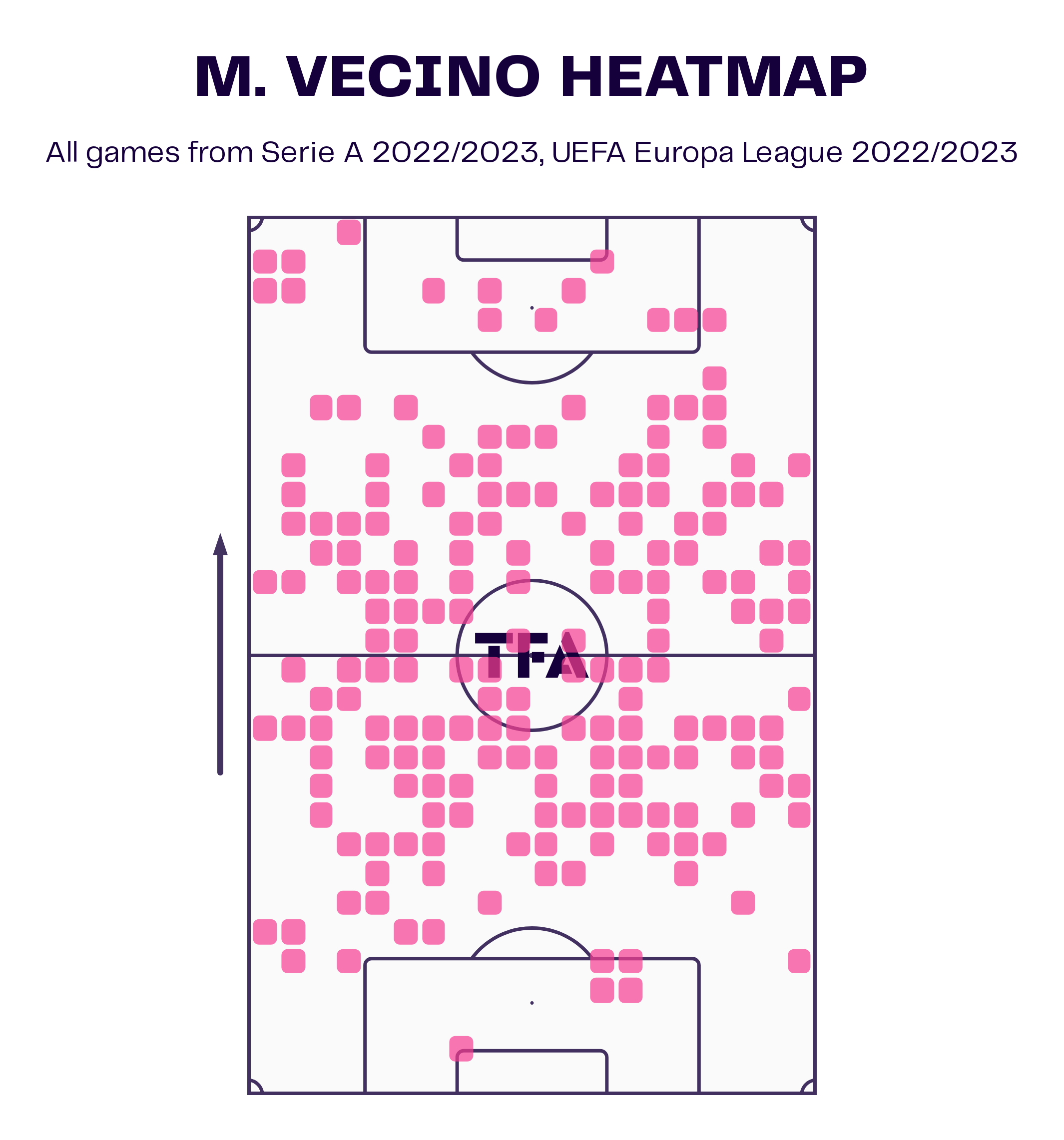 Milinković-Savić is similar to Luis Alberto, but he operates through the centre and towards the right-hand side, looking to join in play right across the attacking third. You can also see how important a role he plays during the build-up phase as Lazio play from the defensive third. 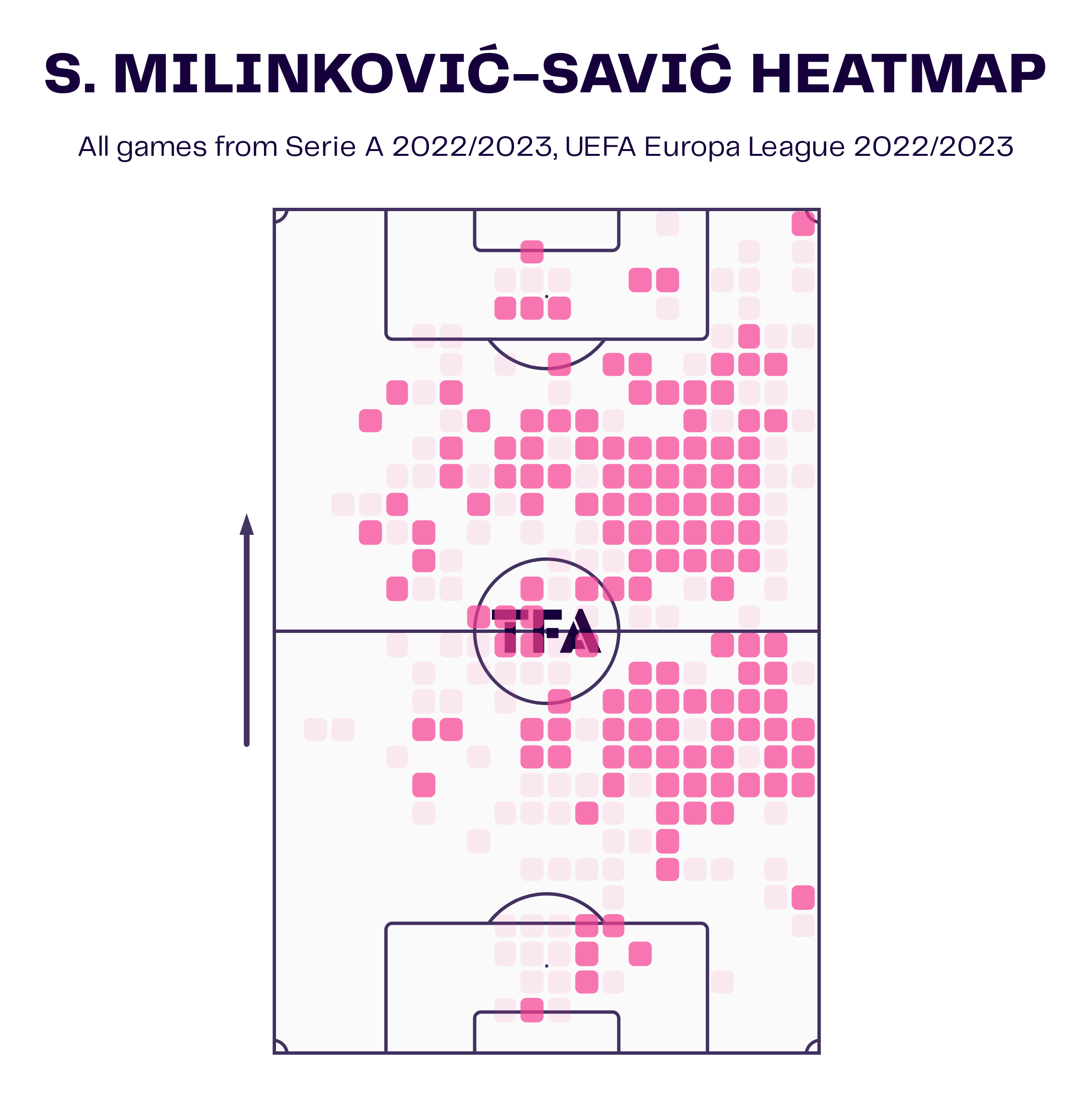 Maurizio Sarri will be delighted with Lazio’s attack in this game and, although Feyenoord was able to pull two goals back in the second half, Sarri will be happy with the fact they were never really in the game. The main thing for Lazio going forward is gaining consistency whilst implementing Sarri’s philosophy.

In this analysis, we have shown you different elements of the Sarriball effect and the key tactical traits within the philosophy that make it work. Lazio had too much-attacking ability for Feyenoord on the night and were unlucky not to score more than four goals.