Coaching: Movement of the 9 in the final third – training analysis

When we coach forwards, and in particular we coach finishing, we so often focus on the execution of the strike itself. Whilst there is absolutely a need to do this, this focus can lead to unrealistic shooting practices, that are often unopposed or from positions that shots very rarely come from.

However, we need to ensure there is also a shared focus on using movement to create more opportunities for our forwards. In particular can we create chances in easier goal scoring positions. Erling Haaland is a prime example of a player who has been able to score consistently from within 10 yards of goal, often using his movement to lose defenders, and score unopposed from close range. For in game examples please see this analysis of Erling Haaland’s movement.

This tactical analysis will focus on coaching movement in the final third with the aim to create more high percentage shooting opportunities. This article will look at the tactics of a forward’s movement, providing examples of practices that can be worked on in training to alter and fine-tune the forward runs of your attacking players inside the area.

We are going to be looking at the type of chance created by a winger driving to the byline and pulling the ball back across goal. These are types of chances that are now commonplace in the modern game, with Pep Guardiola in particular placing a great amount of emphasis on creating these opportunities.

We can see an example of the runs a forward may make from the following image. As the ball is played across goal, the forward, standing on the edge of the area, looks to either hit the front post or the back post area, ideally at pace. They should meet the pull back cross with momentum, making it more difficult to mark them then if they were to make the run, stop and wait for the cross, and then look to finish.

However, the obvious issues with the runs shown in the previous image is that they are straight runs. There is no deviation, and therefore, should this forward be marked tightly by a defender, their run is predictable. Not only this, but as just mentioned, that the forward wants to meet the cross whilst on the run and with momentum, running in a straight line makes it difficult to time the run.

So, as a result, we want to encourage our forward to curve their run. An easy way to structure this is to start their run towards the back post and finish at the front post, and vice versa.

Not only does this allow them to time their runs better, and make it more difficult for a defender to predict their run, but by initially leading the defender into one area, they are creating space in another area to attack.

A really simple way to structure this is by having a forward work in isolation on making these runs, timing them where they are meeting the ball with momentum, using two pairs of different coloured cones to structure this. If you can do this with flat discs it can be even more effective, for they can be left out for the following practice, and any further type of phase of play that may be used.

This exercise can be progressed, albeit still in an unopposed practice, where players either side of the goal, or coaches if numbers are limited, feed quick-fire passes into the area for groups of three to attack. 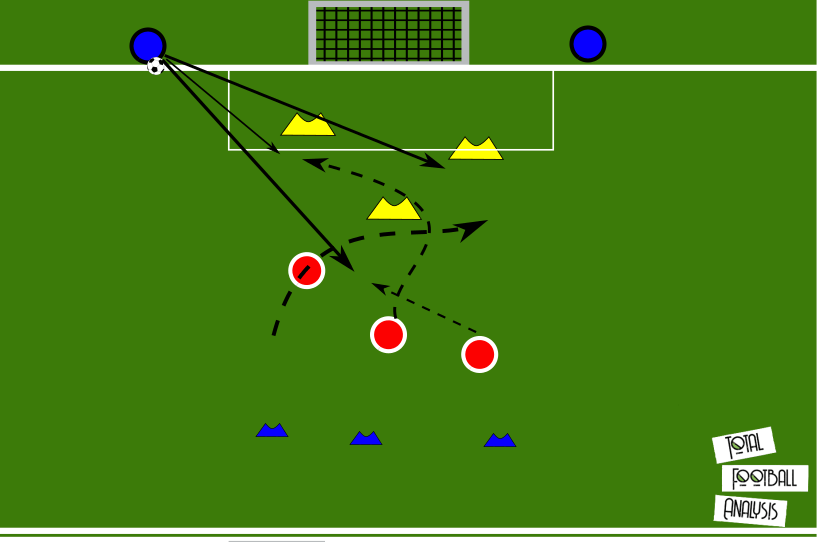 The groups can be asked to hit three different areas, deciding in the moment where they are going, with the one rule that we are asking players to change direction with their run at some point, as we can see from the image shown above.

There are three mannequins or large cones put into the centre of the area, representing potential positions of defenders in this moment, and the attackers have to navigate this space.

Ideally there should be several groups of three, with the ball coming in from either side, and as soon as one group has gone, the other is immediately ready to go. 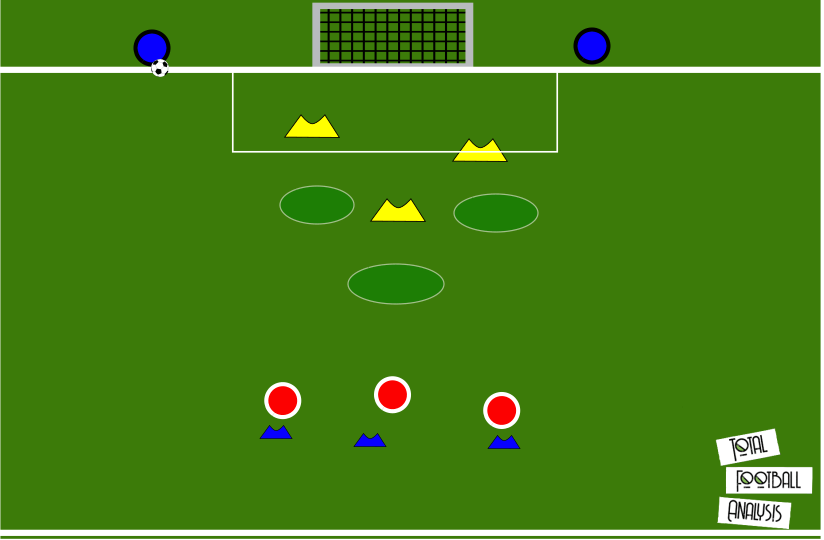 Moving on we can allow our forwards to explore using a change of direction in a contested practice. With two target players up each end and a mini goal in between them, teams play against one another, looking to score by hitting a target player, before the ball is then played inside for an attacker to latch onto. To ensure regularly good ball progression two centre-backs must remain inside their own half, and the centre-forward must remain in the attacking half too. This will always leave a 4v3 overload. Again, to encourage the defending team to press high and leave plenty of space for the attackers to make runs into, teams can be rewarded for connecting ten passes as well – however, they absolutely do not need to connect these passes before scoring. 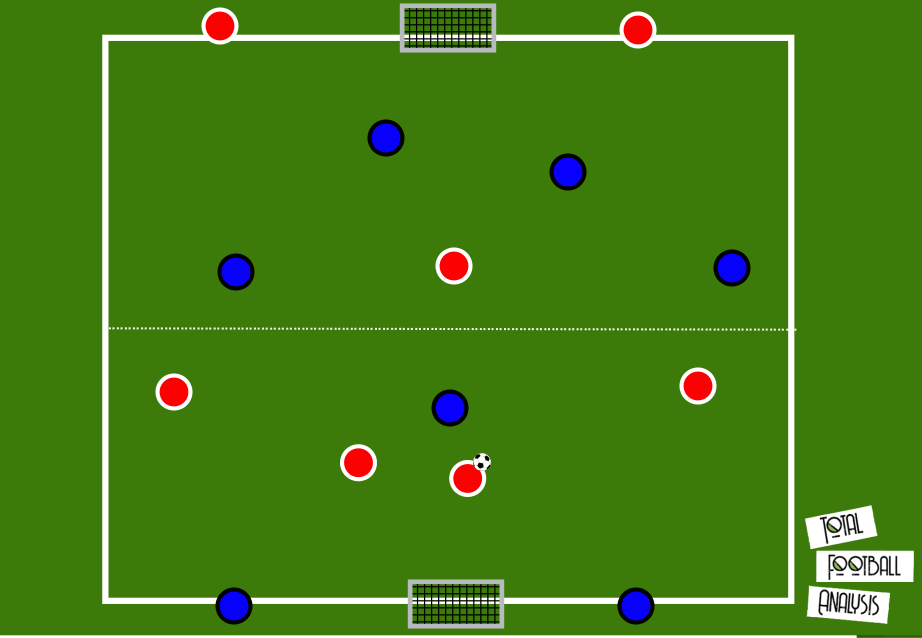 The image below shows the types of attacking opportunities we’re looking to create through this practice. Again, as already mentioned, we can have flat discs on the floor which the players can use to structure their runs, looking to hit two different colours with the curve of their runs. 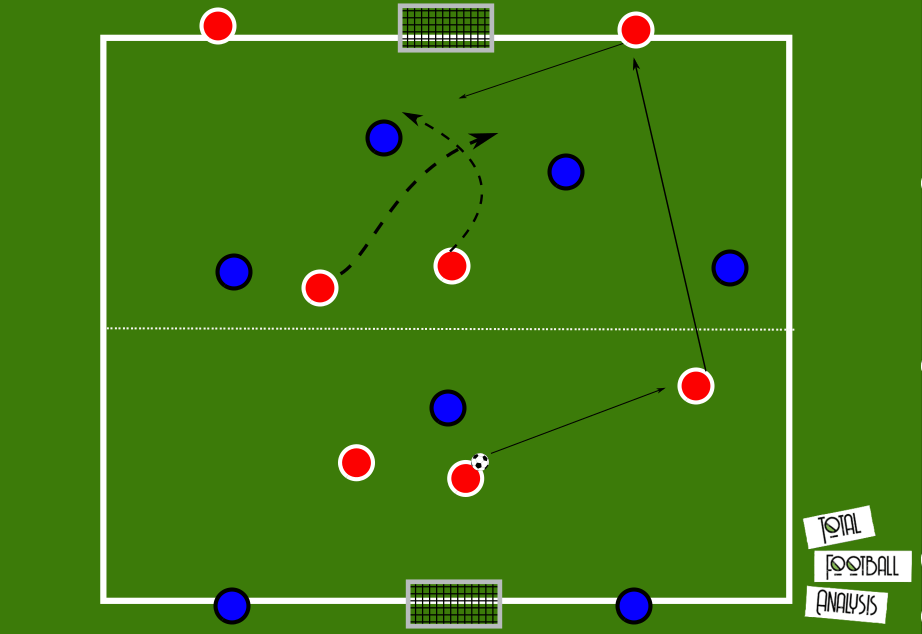 Finally we move onto our last practice, looking at this in even more of a game situation. Again we use the same numbers here, but this time with a goalkeeper on either side. By having 4v4 in the middle there is plenty of space, but this can work with more players. However, we do want to ensure that it looks like a game. Here we have four central players that could represent three midfielders and a forward, with a winger locked into either wide channel. Or it could be two central midfielders and two forwards in the central channel. It’s flexible, but it’s relative to a team’s shape in a game. 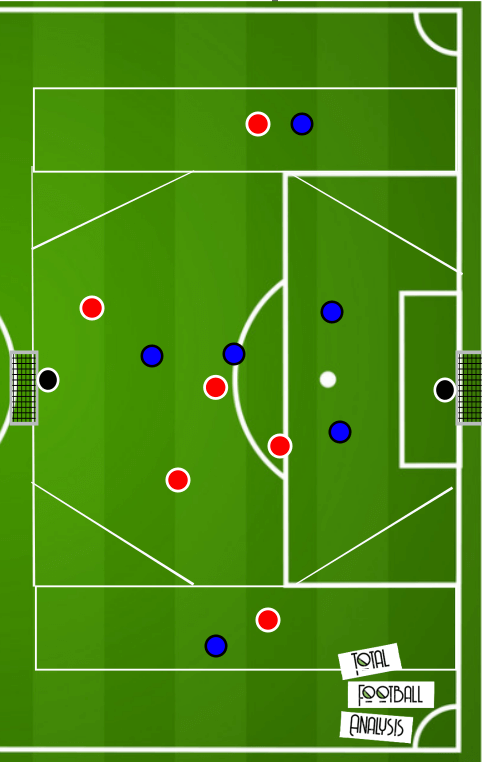 Teams can score any way they like, however, goals from crosses count as double, rewarding the behaviour we want to see from our attacking players. The wide channels extend with corners moving towards each goal. This allows our wingers to drive inside once in possession, and subsequently look for the pull-back cross from a closer angle. We don’t just want them driving straight down the line. They can get a much better angle on their cross by driving inside.

We also want to encourage our centre-forward to position themselves even before making a run where they can gain an advantage and likely create more space for themselves.

Below we can see the ball is on the left-hand side, and the highlighted centre-forward is positioned on the blind side of the far-side centre-back.

In doing this the centre-backs cannot see the forward and the ball at the same time. As the ball progresses here, the centre-forward has a much greater chance of being able to make a run without the centre-backs being able to watch him. If pressed to choose between watching a ball about to be crossed, or to face the other way to watch a forward, a defender is almost always going to watch the ball. 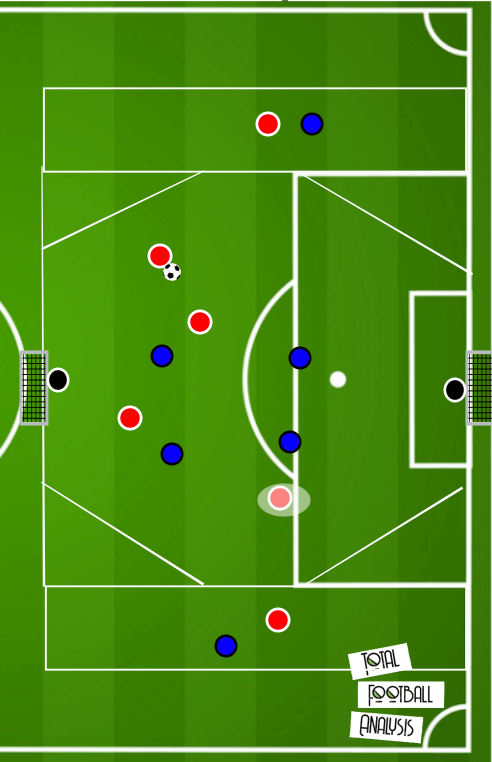 Again, just as we have been doing throughout this practice we want to see our attackers curving their runs, changing directions, and hitting different parts of the 18 yard-box, making it hard for them to be marked tightly.

Whilst it’s important to ensure our forwards are confident striking the ball from different angles, with either foot, and can strike with power, placement, or can score from volleys and headers, we need to ensure we are helping them get into these positions in the first place. The easier the chance, the better for our forwards, and if we can consistently get the ball into positions where we can pull it back across goal and have our team striking the ball unmarked within 10 yards, we have a pretty good chance of converting some chances.

Whilst these practices do start with unopposed work, it is simply to allow the forwards to get comfortable changing angles with their runs, and understanding why, before we then introduce defenders. However, by then moving into a smaller practice with plenty of space and chances for them to score in an open net after a quick set by a target player; then moving into a game realistic practice, again with plenty of space, and chances for wingers to get the ball into attacking areas – our forwards can gain success with this by gradually increasing the difficulty and yet with us asking them to look to work on the same principle.