Roberto De Zerbi and his philosophy at Sassuolo

Italy is usually well-known for its defensive mindset. The term Catenaccio is closely connected with Calcio and its tradition of defensive discipline and results over style of play. Of course, there are several exceptions such as Arrigo Sacchi, or in the last few years Chelsea manager Maurizio Sarri. Those coaches have brought the beautiful game to Italy and have been quite successful with that. Roberto De Zerbi is the next young Italian coach trying to win games by dominating the opponent.

Roberto De Zerbi is like the typical Italian coach. Similar to Sarri or Sacchi he had to work his way up to Serie A. Although he was a professional player, De Zerbi started his career at Darfo Boario. After that, he also coached Foggia, Palermo, Benevento and now US Sassuolo. With Foggia, he was able to secure the Serie C cup. But besides that, he hasn’t been able to win any titles.

In fact, Sassuolo is the first club besides Foggia at which he has been able to secure more than one point per game. The problem for De Zerbi so far? He hasn’t had teams with greatest technical abilities. At Benevento, it was clear that when you give De Zerbi a team of technically gifted players, he is going to be successful.

At Sassuolo he has that team, and the beginning of the season looked promising. They played the way De Zerbi wants, dominated games, created chances and their performances were usually a joy to watch. However, defensive issues led to many problems and worse results.

Currently, Sassuolo sit in 13th place and don’t really have a chance to enter the fight for the Europa League. On the other hand, they probably have enough points to avoid relegation. It’s time to look at De Zerbi’s philosophy and some interesting aspects of his Sassuolo team.

Similar to his managerial stints before, De Zerbi either uses a 4-3-3 or a variation of a 3-4-3. Those formations provide the most triangles and best distribution of players on the pitch to dominate and uses various concepts like the third-man concept. 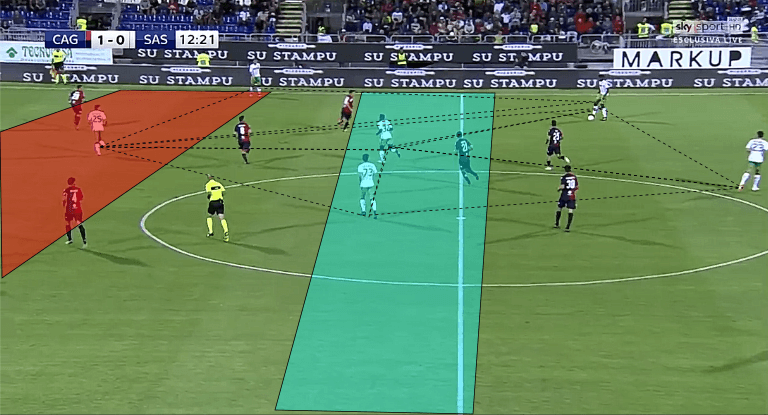 At Sassuolo the wings are often occupied by two players during the build-up which is not typical but helps the team to create more space by stretching the opponent. Furthermore, the central midfielders are positioned in the half-space while the striker has an active role and has to participate in the combination play. With Kevin-Prince Boateng, they had the ideal striker before he moved to Barcelona in January.

Looking at the structure in the build-up is one interesting aspect of De Zerbi and shows the influence of Sarri. The full-backs aren’t pushing higher but stay deeper on the same line as the defensive midfielder. As a consequence, teams have to adjust their pressing. Especially in the earlier stages of the season, the deeper full-backs gave them an advantage in possession.

The advantages of deep full-backs

Besides Roberto De Zerbi, Maurizio Sarri also uses deeper full-backs in the build-up stage. I discussed the full-back position in another article and still think that this position is going to develop and get more important in the coming years.

By only having high and wide positioned full-backs you give the opponent the chance to simply close the half-spaces and the centre. As a consequence, you can rarely build-up successfully. With deeper full-backs, the centre-backs have another passing option and the opponent has to react to that. 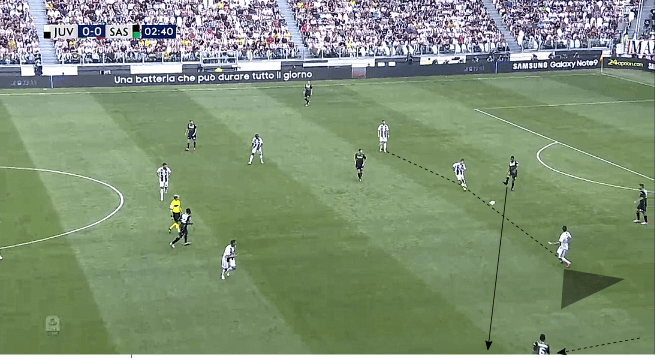 Because of their deeper positioning, Sassuolo stretch the pressing of their opponents. The winger can’t close the half-space and the wing at the same time. Therefore, you attract the winger to push higher and lose contact with the rest of the shape.

As a consequence, Sassuolo’s full-backs can find space behind them. By simply moving forward they offer their centre-backs a diagonal passing option and Sassuolo can overplay the pressing. 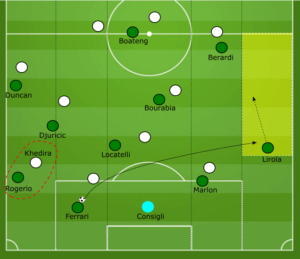 Furthermore, when Sassuolo advance in higher zones, the deeper full-backs also open passing option to the players between the lines because the winger cannot close all the passing lanes. 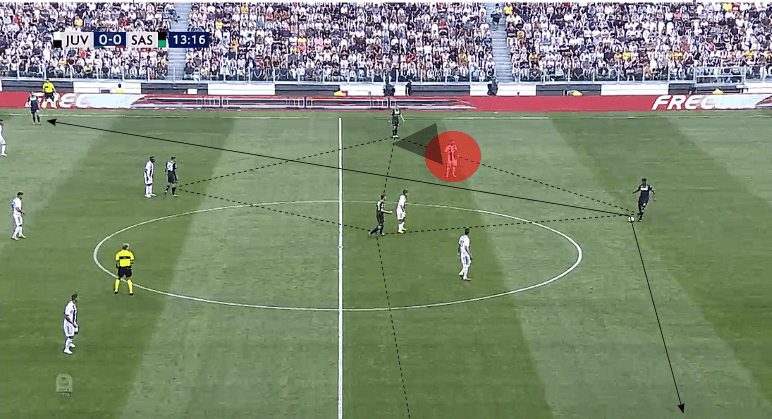 Third-man concept and playing out from the back

Besides the deeper full-backs, De Zerbi’s team create a lot of triangles and use the third-man concept to overplay the first line of pressure. By moving the ball in the back four they attract their opponents and try to find the defensive midfielders afterwards.

In particular, passes to the central midfielders are important because they can either play a lay-off pass to the wingers or the defensive midfielder. Therefore, Sassuolo have multiple options to continue and advance.

Roberto De Zerbi also encourages his team to play out from the back and take the risk of losing the ball. Against better opponents, they concede a few goals by losing the ball early in the build-up. However, in the long-term, this courage will result in more chances created than goals conceded.

At the moment their defensive instability and the fact that they are too widely spread in possession leads to their current defensive issues. If you are too widely positioned, an effective counter-press is hard to execute. Sassuolo are vulnerable against counter-attacks.

Roberto De Zerbi can be seen as one of the most promising coaches around because he gives his team a clear identity. However, he still has to develop and improve his system. Positional play is far from perfect and the defensive issues have to be solved in order to be successful. However, he could be the next coach to get a chance at a bigger club.